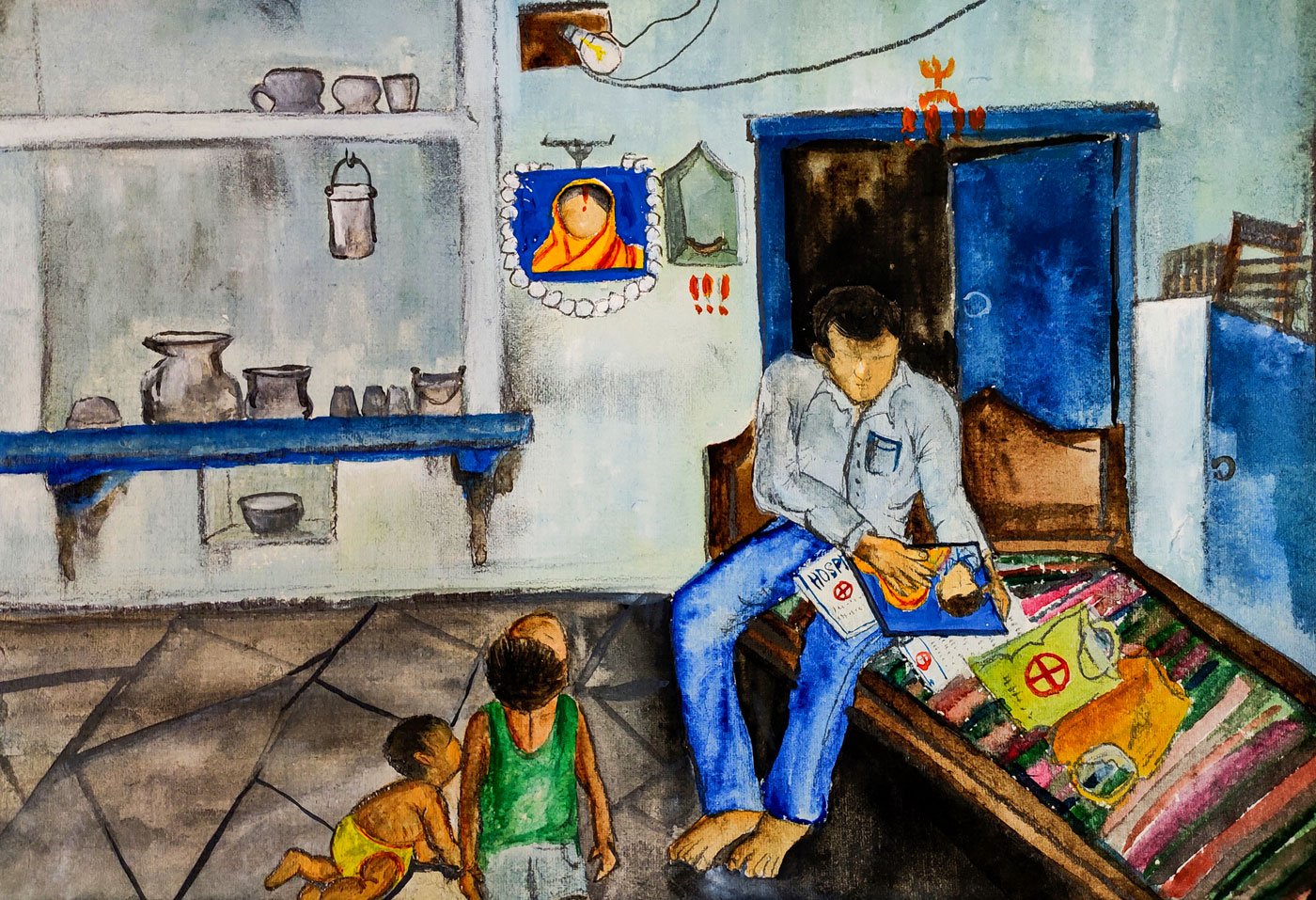 A coerced sterilisation, a senseless death

Bhavna Suthar of Rajasthan's Bansi village died after a sterilisation procedure at a 'camp' last year that flouted norms and gave her no time to consider options. Her husband Dinesh is still seeking justice

“There was nothing wrong. Nothing unusual. Everything was fine, life was going on quite ordinarily,” says 33-year-old Dinesh Chandra Suthar, sitting amid his family's files and reports, and recalling how everyday the circumstances were when the unthinkable happened.

On the walls of the Suthar home in Bansi village in Rajasthan, hang photographs of his deceased wife. Bhavna Devi’s picture is the same one Dinesh has in his files. Shot months after they were married in 2015, the photograph was to accompany an application for a government scheme.

Five years on, Dinesh is holding on to these papers and photographs that mark his brief married life. He is the father of two boys, three-year-old Chirag and Devansh, who was just 29 days old and still to be named when Bhavna, his mother, died of a punctured intestine following a sterilisation procedure at the 50-bed community health centre (CHC) in Bari Sadri municipality.

Dinesh – who has a BEd degree and earns Rs. 15,000 as a teacher at a private school in Badwal, six kilometres from Bansi – tries hard to stitch the chain of events together, looking for the loose thread, the single flaw that caused their lives to unravel. And ends up blaming himself.

“Was it because I agreed to the operation, trusted the doctors who kept saying it’s all fine? I should have asked for more information. I should not have agreed to the operation or trusted anybody. That’s my fault,” says Dinesh, who has tussled with these tortured thoughts innumerable times since his wife died on July 24, 2019.

On June 25, 2019, barely a month before her death, Bhavna, 25, delivered a healthy baby boy, Devansh. The second pregnancy and delivery, like the first, had been smooth. Her reports, check-ups, and even the delivery at the CHC in Bari Sadri, around 60 kilometres from their village in Bari Sadri block in Chittaurgarh district, were all normal. 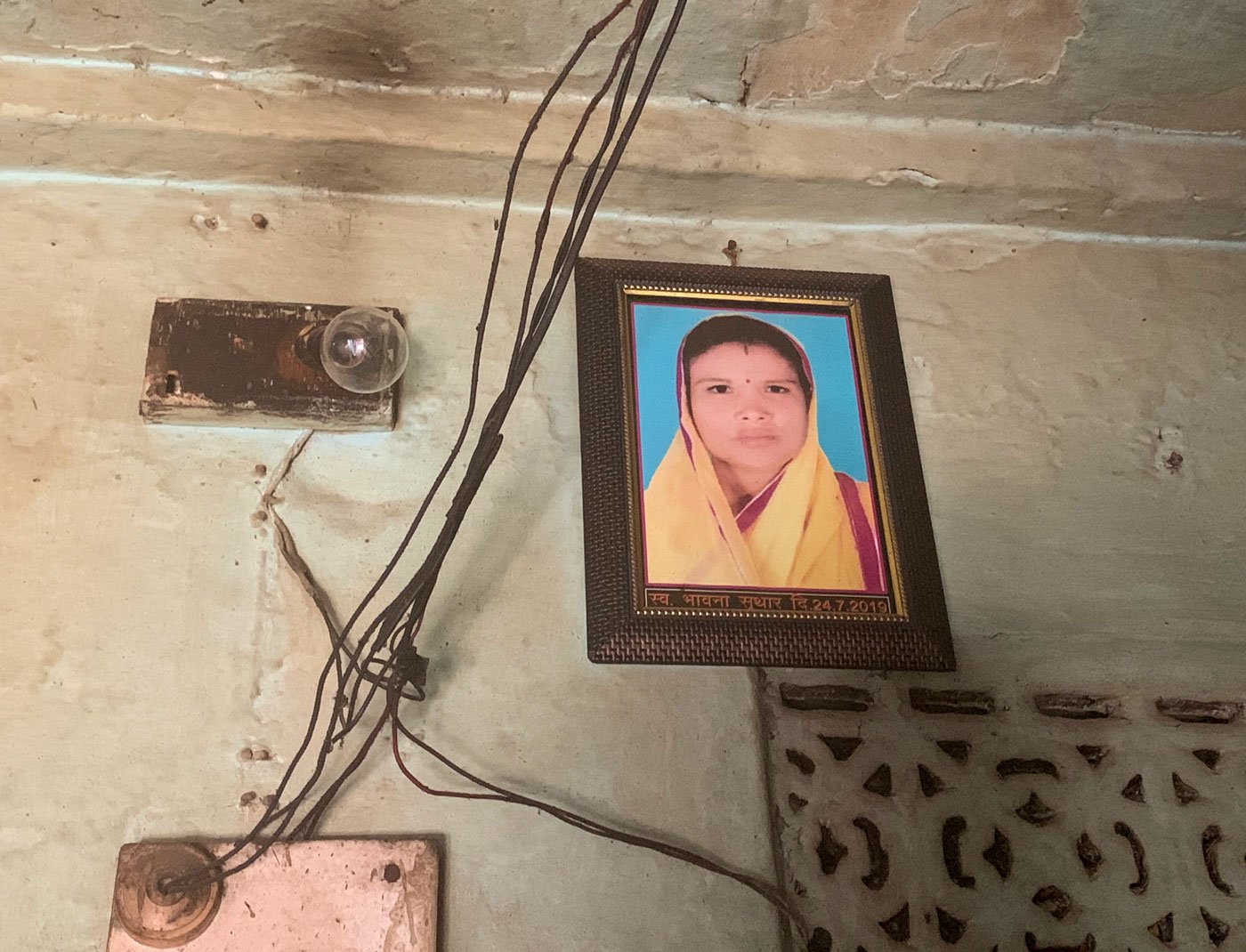 Bhavna Suthar underwent permanent sterilisation at the CHC in Bari Sadri on July 16, 2019; she died a week later

Some 20 days after the delivery, when Bhavna was at her mother's home in Bansi – a village with a population of 3,883 – an accredited social health activist (ASHA) asked her to come along for a regular check-up and blood test at the CHC. There was no weakness, but Bhavna decided to go with her. Her mother accompanied her. “There had been no mention of any operation when the ASHA worker came to our house,” Bhavna's mother had told Dinesh.

After the check-up and tests, the ASHA worker and doctor on-duty advised her to have a sterilisation operation.

“She had two children already and since the couple weren’t using any method of family planning or birth control, it was best to do the operation . Jhanjhat khatam [the hassles would be over]," the doctor and ASHA worker had told Bhavna in front of her mother.

When Bhavna, who had studied till Class 10, said she would consider it and discuss the sterilisation with her husband after she returned home, she was told it was best to get it done right away. “A sterilisation camp was being held on that day at their CHC. So they pushed us to do it that day itself, saying she was anyway recuperating from the delivery, and if she combined it with the operation she wouldn’t have to go through the trouble again and again,” Dinesh remembers the doctor telling him. He had reached the CHC from the school after he received a call from his wife.

“It did seem odd. To be honest, we had not really thought about sterilisation. We would have in due course, but I was hearing about all this for the first time. And I agreed,” Dinesh says.

“Nothing was the same after that,” he adds. 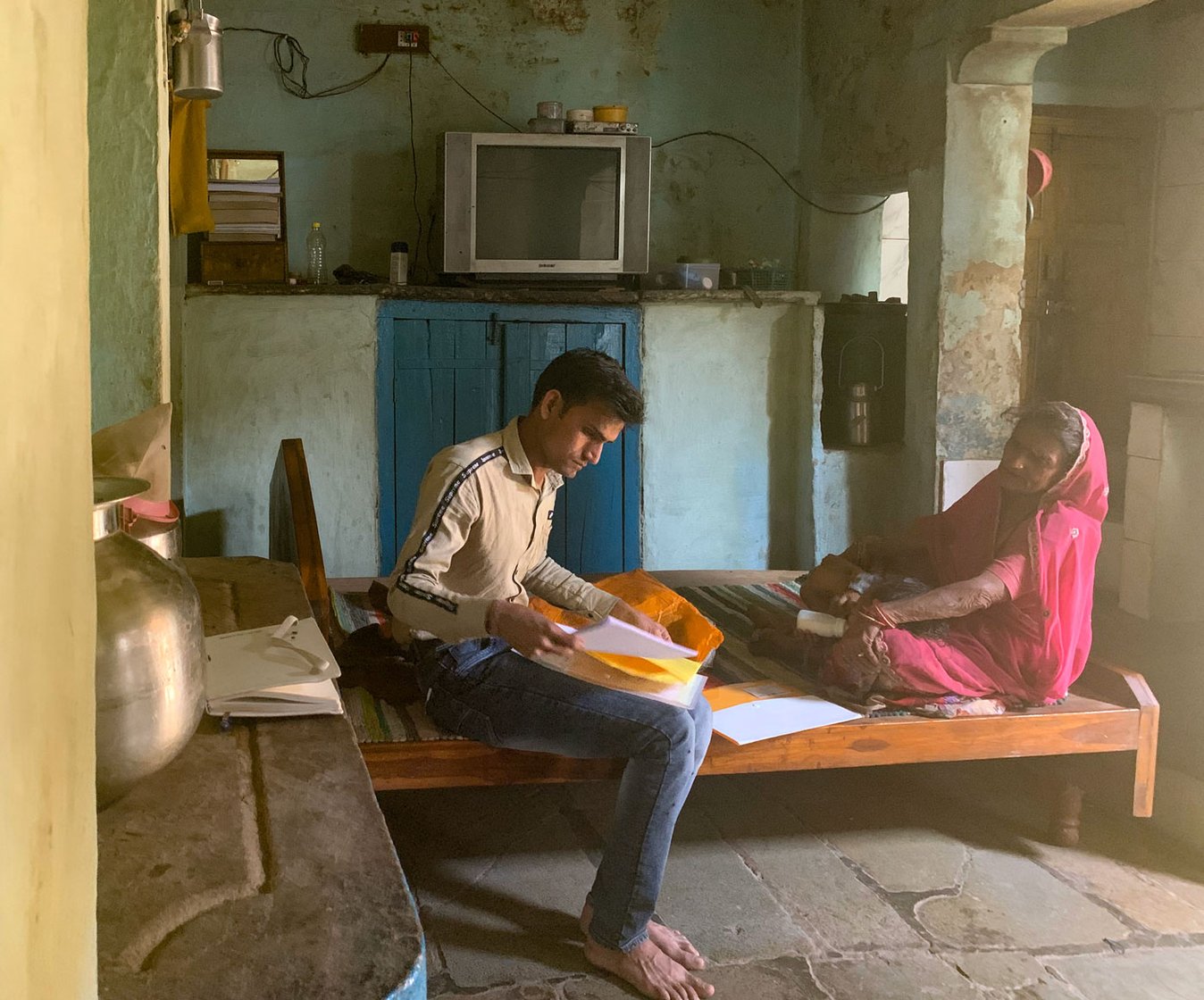 The loss is palpable, but Dinesh is determined to to get whatever justice can look like in the face of this catastrophe

Bhavna was among the five women who underwent the permanent sterilisation operation at the CHC in Bari Sadri on July 16, 2019. She was the first to undergo the tubal ligation, conducted by an MBBS doctor using the minilap procedure. The four others were discharged two hours after their operation. When Bhavna gained consciousness three hours later, she had excruciating pain in her abdomen. They gave her an injection and told her to stay at the CHC overnight because her blood pressure was very high. The next day the pain in her abdomen had not abated, but she was discharged nevertheless.

“The same doctor rudely told me, pain is normal after an operation; take her home,” Dinesh remembers.

By nightfall, Bhavna’s stomach was swollen, the pain had become intense. In the morning, the couple were back at the CHC. An X-ray and sonography later, Bhavna was again admitted to the hospital. They had no idea what had gone wrong. For the next three days, she was given six bottles of IV fluids a day. For two days, she was not permitted even a morsel of food. The swelling in the stomach reduced, then increased again.

Five days after the operation, at around 10 p.m., the doctor who had conducted the procedure told Dinesh that she had to be transferred to the government hospital in Udaipur, roughly 95 kilometres away, for further treatment. “He called for private transport that I paid for (Rs. 1,500) and even sent one of his compounders from the CHC. But what was the problem? I still did not know. Something related to the operation. That’s all.”

When they reached the emergency ward of the Maharana Bhupal Government Hospital in Udaipur at 2 a.m., fresh X-rays were analysed and they were told to go to the women and children's ward in another wing. There, Bhavna had to go through the admission process again.

And then, for the first time Dinesh realised something was terribly wrong when the doctors on duty, reluctant to treat Bhavna, said, “We don’t treat the mistakes of other hospitals.” 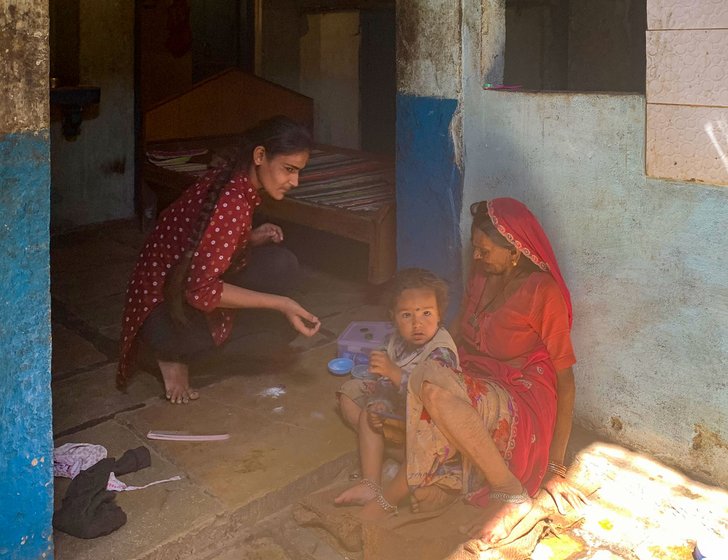 Dinesh is left with two sons, three-year-old Chirag (in the photo with relatives) and Devansh, who was just 29 days old when Bhavna, his mother, died of a punctured intestine

Finally, after she was admitted on July 22 and the sonography had been conducted, Dinesh was told that two operations were being conducted immediately – the first, to insert a tube to drain her colon, and the second to repair her perforated intestine. He was told the next 48 hours were critical.

After the operation the doctors told Dinesh that during the sterilisation procedure on his wife at the CHC in Bari Sadri, her intestine had been perforated by the doctor’s scalpel and that was why faeces was spreading through her abdomen, causing infection throughout her body.

For the next 48 hours, Bhavna was under observation. Her children were with their grandparents. Her husband, surviving on tea and water, was waiting for some sign of improvement. Bhavna showed none, and died on July 24, 2019, at 7:15 p.m.

The non-governmental organisation Prayas, based in Chittaurgarh, along with the Human Rights Law Network, picked up the story and conducted a fact-finding study of the case in December 2019. They found that Bhavna’s  sterilisation was in clear violation of the Standards for Female and Male Sterilization Services (2006) specified by the Ministry of Health and Family Welfare, government of India.

Their report stated that Bhavna was lured to the community centre and coerced into a permanent sterilisation procedure without any prior information or counselling. Even after the operation, the doctors from the CHC didn’t inform the family about the perforation resulting from their negligence, and made no surgical intervention to rectify the damage. Further, no one at the CHC or at the Udaipur hospital told them about the government’s Family Planning Indemnity Scheme, 2013, under which the family could seek compensation of Rs. 2 lakhs for death immediately after a tubal ligation procedure.

Chhaya Pachauli, director, Prayas, points out that Bhavna’s is a classic example of how the targeted approach of sterilisation 'camps' continues, disregarding the government’s guidelines on sterilisation, and how this compromises women’s health and rights.

“A woman must be given enough time to consider, think and rethink whether she and her partner are ready to opt for a surgery,” says Pachauli, referring to the guidelines. “In no way should she be coerced to go through the surgery just because there's a camp going on and there's pressure from the higher authorities to mobilise women for it. The government may say that they don't go by 'targets' anymore, yet we know that health workers are pushed to convince women for sterilisation and that district [administrations] are judged on the basis of the number of sterilisations carried out, the best performing districts even being awarded by the government. This practice should be stopped.

“The camp approach must be done away with in true spirit, not just to facilitate safe surgeries but to ensure better care pre- and post-sterilisation or in case of any complications,” Pachauli continues. “Instead, sterilisation should be integrated as a routine activity within primary healthcare. And health functionaries need to be equipped with counselling skills, which must be promoted as an essential component of care.” 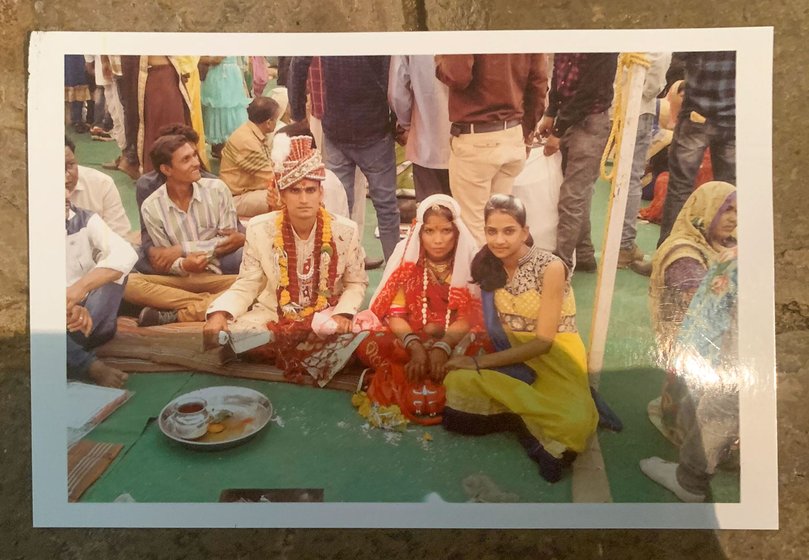 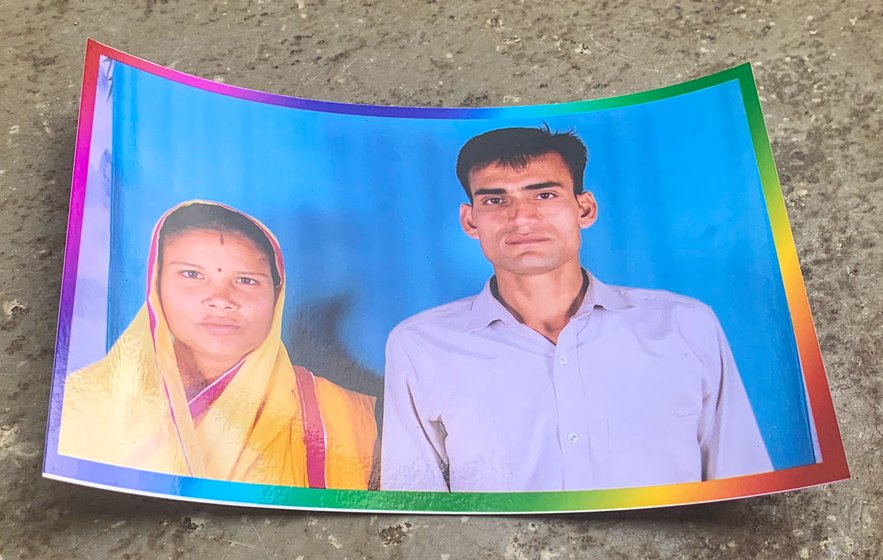 In the course of their work in Rajasthan, Prayas has come across many cases of women who had failed sterilisations but never claimed compensation because they had no idea they were eligible for it.

“Often, women are persuaded to go through sterilisation without them or their spouse/family being provided adequate information about what it truly entails. The complications that might arise in rare cases are never discussed, nor are women ever prepared for these. They are never advised on what to do if the sterilisation fails or any health complications are detected. Rarely are they informed about the compensations they can claim in case of failure, death or complication,” Pachauli adds.

Despite being at the receiving end of the flouting of every such norm, Dinesh has accepted his family’s loss with fortitude, even a wry humour, as he struggles to return to teaching, packing his own lunch. “I took an empty lunchbox one day,” he smiles.

The loss in the Suthar household is palpable, but he knows they must begin afresh. He is continuing some construction work at their concrete house. The television set is on, the sound of mortar and pestle rises from one corner, and the women of the neighbourhood are taking care of Devansh.

The family spent over Rs. 25,000 on medicines and transportation in the days leading up to Bhavna's death, and Dinesh remains determined to get whatever justice can look like in the face of this catastrophe. His application for the compensation of Rs. 2 lakhs is pending at the Chief Medical Officer's office in Chittaurgarh. “I spent everything I had,” he says. “It would have been okay if she were here.”