36 tube wells & digging, a scorching message emerges from deep down

The digging began when his well ran dry a couple of years ago. Rains had failed. Ground water table had depleted. So Vishwambhar Jagtap decided to dig a tube well.

It’s cheaper. It’s done within hours. It also hides the dirty truth — you can go down real deep and siphon out water without any fuss.

The first one yielded some water around 400 feet. It went dry in days. He commissioned another. It bore no water. Then the third, the fourth....
Each time he found himself delving deeper to tap water.

Something unparalleled — for this time of the year — is unfolding in this part. Leaders call it a drought, a natural calamity; experts tracking the water story call it a man-made disaster.

It might be a combination of both. The acute water scarcity gripping almost a third of Maharashtra has no precedent in its recorded history, though drought is not new to the state.

In two years, the 42-year-old science graduate and horticulturist dug more holes for water on his 18 acres, part of which hosts a pomegranate orchard, than all other farmers of Takalsim village put together did.

When the 36th attempt literally bit the dust late last month, a few days before we met him, Jagtap says, he decided to take one more chance. This time, he told the rig-drill owner not to stop until they had succeeded in their pursuit. 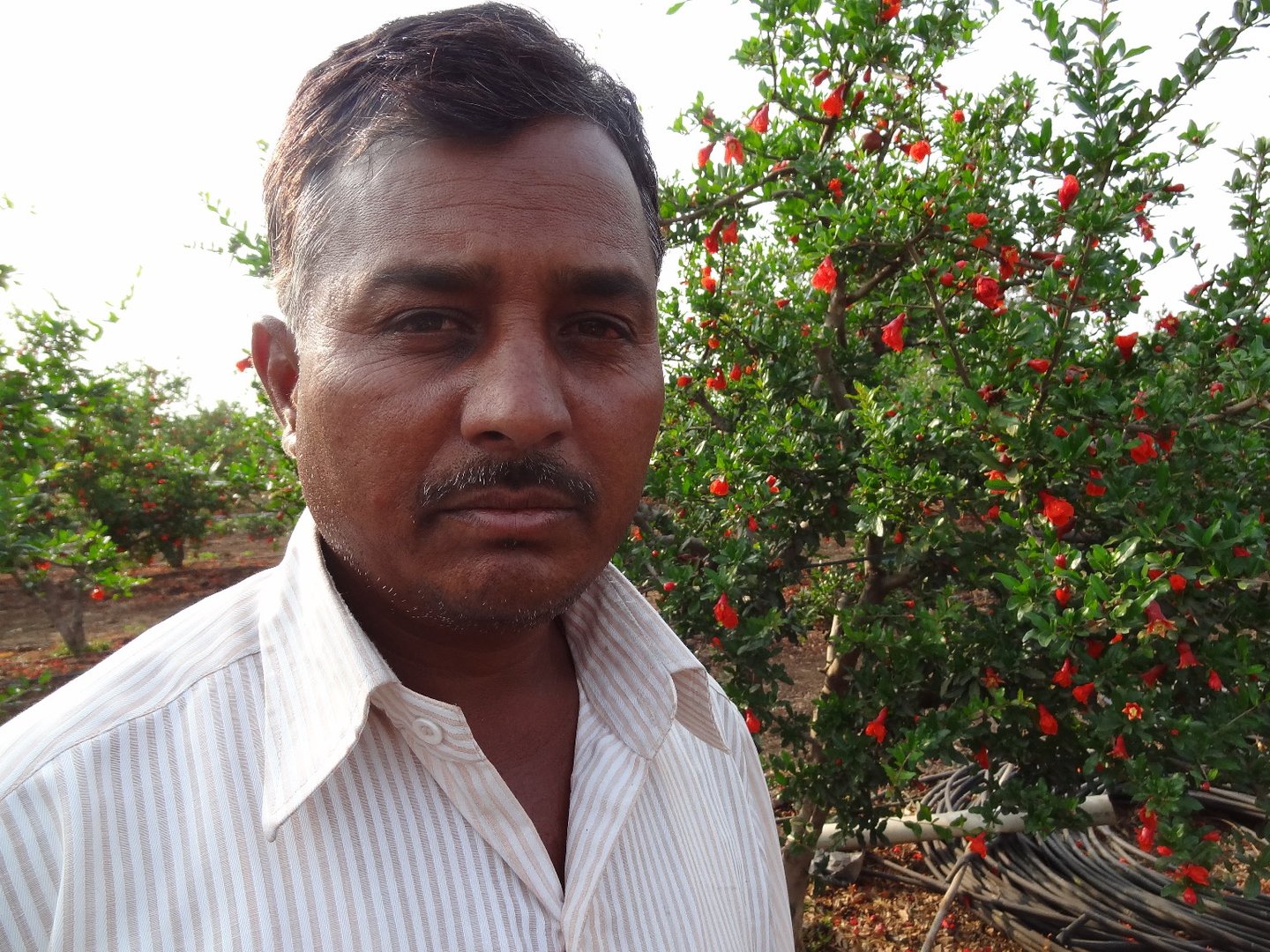 In Ashti block of central Maharashtra’s Beed district, where his village is, Jagtap has earned a reputation of sorts for his tube well frenzy. No other farmer comes even close to him in drilling the bores in search of water, though such drilling is ubiquitous across large tracts here.

Parts of western Maharashtra and Marathwada region — roughly a third of the state with over 20 million people — are facing what people in Rajasthan’s desert or Gulf nations do. Reservoirs and rivers have run dry after rains failed for the second — in some places, the third — year on the trot.

Ground water table is alarmingly depleting, far below 500 feet at some places and at an astounding 1200 feet in districts like Beed.

“It took me some time to choose the spot,” a soft-spoken Jagtap says. A truck, with a rig mounted atop, was brought near a neem tree on the western slopes of his land. For two days, the rig drilled the earth, pushed the plastic tube sections one after another, hoping to find what many in this part now deem as a treasure. Finally, it tasted water at 1,010 feet. Legally he should not have gone below 250 feet.

Jagtap’s desperation is to save his orchard. At stake is his seven-year-old struggle for prosperity. In 2005, he began a steady switch to horticulture on drip irrigation for an effective and optimal use of water, since he says traditional farming never brought him any returns.

Pomegranates brought him returns that have pitch-forked him to a set of affluent farmers. He and his wife work their orchard by themselves. They have largely mechanised their farming operations to cut labour costs.

On an otherwise barren land pockmarked with bores all over, about 5,000 pomegranate trees provide a lush green contrast. Trimmed to perfection, they all stand in lines like files of disciplined soldiers.

Right now, they are bearing red flowers. “My fruits will be of the same colour and big,” he says. The fruits will weigh 400-600 grams apiece. 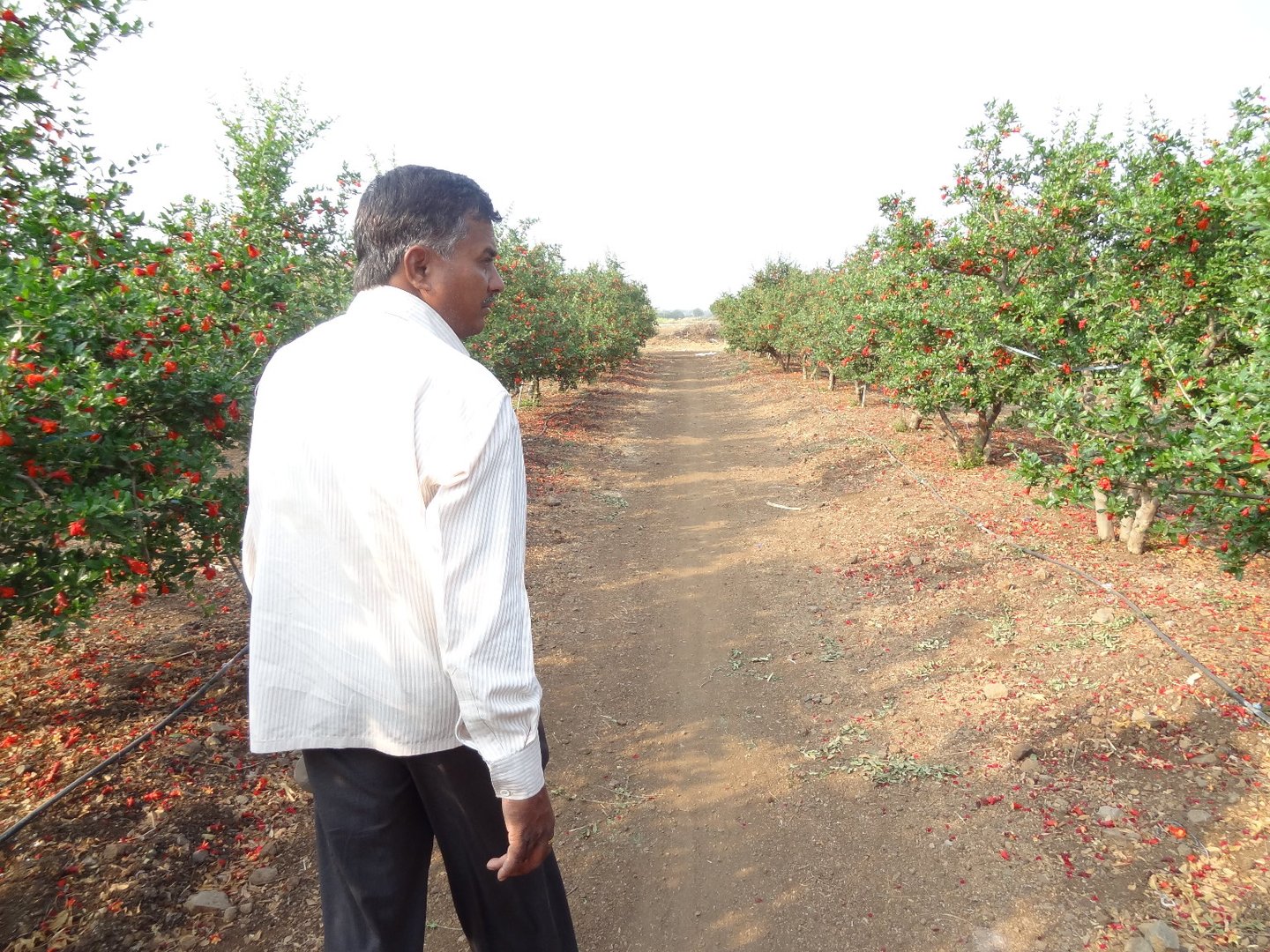 Halfway through, he’s steadily converting the entire land into the orchard. Some trees are fully grown; some have just been planted. The Jagtaps neatly stack the fruits, according to their size and shape, in separate plastic crates. The traders buy his pomegranates on his farm.

They will reach markets in Maharashtra, and as far as Chennai, Bangalore and Calcutta.

His annual returns from the orchard: Rs 45 lakh. His net profit after all the costs: around Rs 24 lakh. “For the past three years, the bulk of my production cost is towards water,” Jagtap says.

He has been buying water from private tankers or digging tube wells or farm ponds without success. For two years, it hasn’t rained at all.

“All I need,” he says, “is a good aquifer to last a few more months.” He is aware that he’s violating the government rule to get to that depth for water. “But I can’t let my trees wither and die.”

Jagtap is not alone in this part digging holes for water.

Tens of thousands of farmers across central-western Maharashtra are grappling to save their standing crops and orchards: from sweet limes to pomegranates, chikoos to papayas.

It’s only February and many of them have already given up. Forget farms or orchards, the focus now is securing drinking water.
Maharashtra went through a simmering drought in 1972, which broke the economic backbone of people who then mounted collective effort to rebuild a prosperous co-operative economy in every sector.

The state has been witnessing drought and rainfall failures almost every year in some or the other parts. But this one, according to many who have seen the process for years, is among the severest situations of all.

“We have food, we have money, we also have work to be made available to people, but we don’t have water,” Union agriculture minister Sharad Pawar recently told this reporter during a visit to Nagpur. In the 1972 drought, people did not have food and work, but they had water.

The spectre of this crisis cropped up as long back as October, last, when the rainfall in a large tract was abysmal. Chief minister Prithiviraj Chavan was compelled to declare a drought-like situation in nearly 123 tehsils in October-end as the monsoon began to recede.

Maharashtra has rushed to the Centre thrice in this past nine months for financial help like no other state has. For three straight years, rainfall has been below 50 per cent of the long-term average, erratic, and in spurts, in the affected areas.

One third of Maharashtra falls in what is known as the rain-shadow zone where rainfall is unreliable and averages 500mm or less. Ground water table across this region has depleted by several metres as people go deeper and deeper to meet their needs.

Consequences are long-term, multi-dimensional, and with losses running into several thousand crore of rupees, some effects of this year’s early situation would resonate for generations, former Lok Sabha MP from Ahmednagar Vitthal Gadakh wrote in Marathi Lokmat recently. Gadakh was witness to the 1972 drought as a member of his district’s zilla parishad; people and cattle starved for months then.

Estimates suggest that Maharashtra would lose orchards spread over about 5 lakh hectares, a loss of recurring nature for individual farmers. It takes around four to nine years for a pomegranate or sweet-lime orchard to deliver returns. Grape vineyards in many parts have just burnt, devoid of water.

Dry land and sustenance farmers are having an even more torrid time. Kharif and rabi crops have perished. Food crops have remained stunted. Fodder shortages are threatening livestock sustenance. 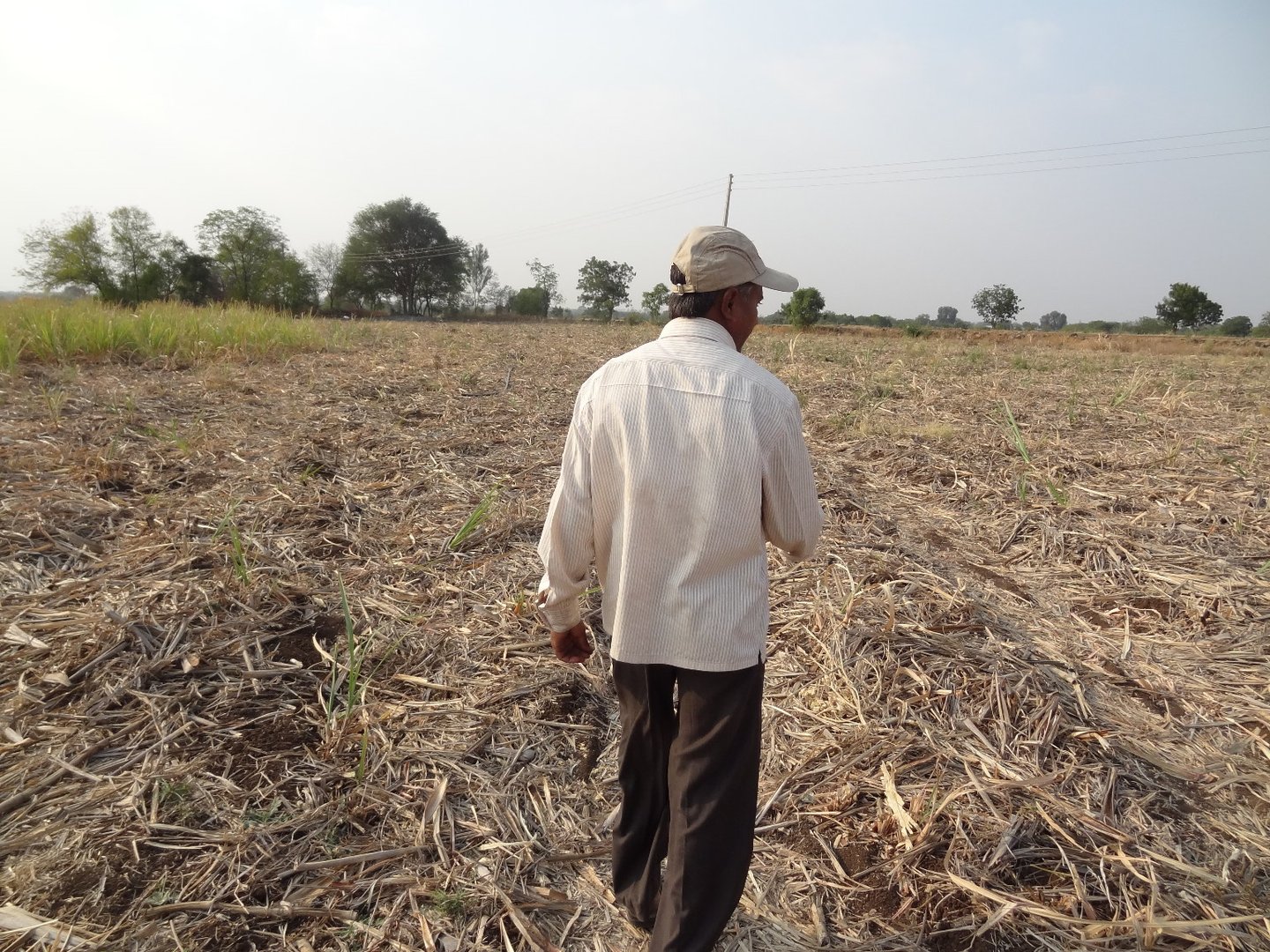 
Jagtap says it took him some time to gauge the gravity of the crisis, but he is coming to terms with what thousands of people across many parts of Maharashtra are slowly realising: a critical water situation. Surface water has perished. Rivers are dry. And ground water is the only hope.

People and officials are worried if situation is this bad today, how worse it might get by summer. In Jalna or Beed, for instance, there are tube wells sliding down 1,000 feet and ending up with dust. Those who can’t afford to drill are beginning to think of leaving for bigger towns.

Government and private water tankers, across many areas, did not stop plying all through the last year. Their numbers are on a steep rise: almost 2,000 government tankers are supplying water to villages and a multiple times that privately. For many, water is now a luxury, and for some, a roaring business.

Close to 10,000 small and medium-level reservoirs are without water. Godavari, the Ganges of the south, which emerges from Nashik and flows through Marathwada has unbelievably run dry.

Only a few dams on it upstream — in Nashik and northern Ahmednagar districts — have some water, now reserved only for drinking purposes.
Jayakwadi, the second biggest dam in the state on river Godavari in Aurangabad district, has reached near-dead storage, a level from where you can’t draw water.

About half a million cattle-heads are in shelter-camps run by the government. As the summer approaches, the figure is expected to surge to about a million, or maybe more.

Student dropouts have increased. They have migrated with their parents. College-going students from rural areas are finding it hard to continue with their studies this year.

In Jalna and Osmanabad cities, residents are already shifting base because there is no water. It is for the first time, perhaps, that water scarcity will trigger a major exodus from these regions.

Drought-hit areas of Maharashtra show a pan-India trend: of increasing reliance on ground water for drinking, agricultural and now increasingly industrial needs. The fallout is obvious: fast depletion of the water table across the country and widening gap between the use and recharge of ground water.

In the past few months alone, in Takalsim village, Jagtap has shelled out Rs 12 lakh from his kitty on digging tube wells. “I have been postponing buying a laptop for my eldest daughter,” he says. “Every time I plan to get it for her, the money goes into water.” His story is symbolic of every household in this part. 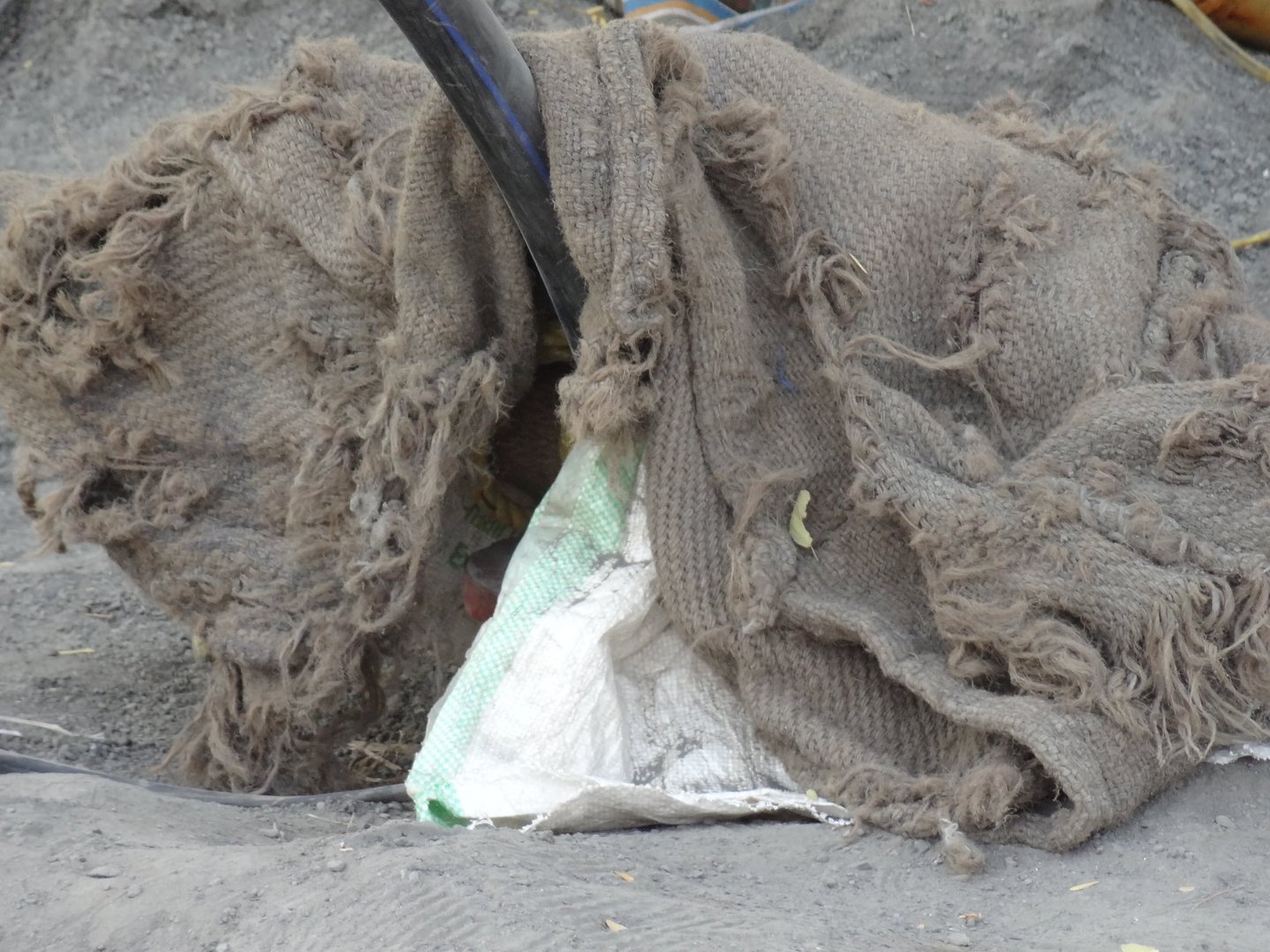 Villagers thought he had gone crazy. Most of them stopped after a couple of attempts on their farms when they couldn’t tap a good water aquifer even at 500 feet. Jagtap’s search hasn’t. If his latest bore goes dry, he might go for another. His pomegranate trees are about to be bear fruits.
“Paise gele tar chaltil, bagicha vachla pahije (It is okay if I lose money on bores, my orchard should survive at all costs), says Jagtap. “I know, they thought I’ve gone mad; they called me names.”

Now, he says, is the more difficult part: how to suck it out and irrigate the trees. The pumps available in the local market can’t siphon out water from that depth, so he will need to improvise. “At best I can get 50 litres of water a minute.” That, he says, in turn will exacerbate his power bills in the next few months.

He will lift water from this tube well into a big concrete tank on the surface and from there he’ll pump in through the drip pipes to water his trees. “We have five months to go,” he says. “Five,” he repeats. “We will not starve but we will be completely devastated if water situation gets worse.”

Necessity is the mother of all lessons. Jagtap plans to dig water ponds, build bunds and do everything before the next monsoon to conserve every drop of rainwater on his farm and recharge the water table. “We can’t go on overexploiting the ground-water without recharging it. I hope rains are good this year.”

It’s a hope everyone in this part lives on.