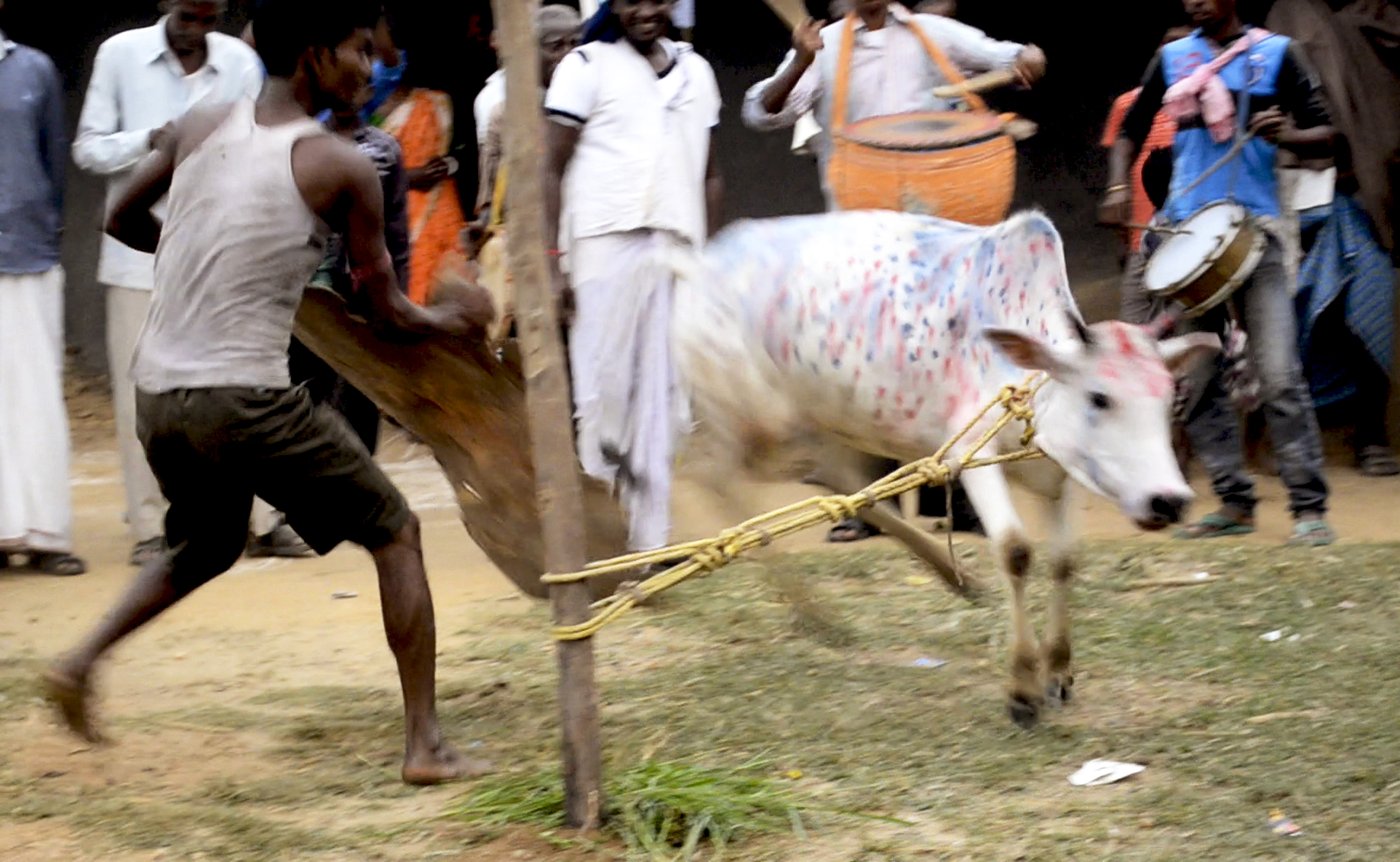 When the cows come home in Parkidih

During the 'go-bnadna' festival – a time of earth colours, wall painting, music and games – the Santals of Purulia district in West Bengal offer thanks to their cows

The year’s single rice crop is ready in the field. It is the end of October, and people have started bringing the produce from the fields into their homes. After a long time, there are surplus grains in the homes of the dirt-poor Santal tribe of Parkidih village in Purulia district, West Bengal.

Everyone in Parkidih – around 400 youngsters, parents, grandparents – now has some extra time to relax after a brief but gruelling season in the fields. Winter is knocking. Trees in the nearby jungles of Gajaburu Hills in the Chhota Nagpur plateau are changing colour. The scorching heat is gradually being replaced by a cool breeze from the north. 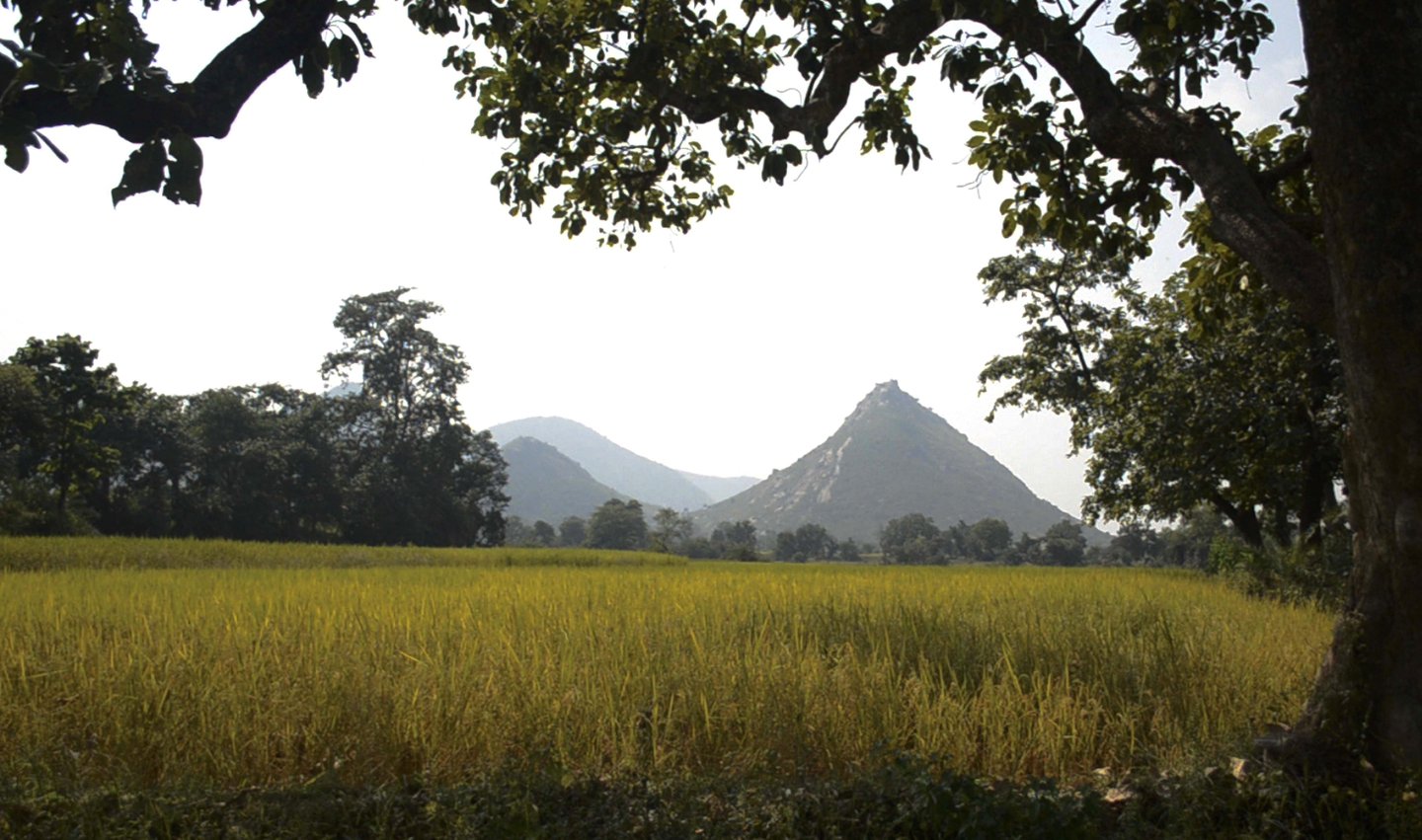 After a gruelling season in the field, the Santals of Purulia will relax and prepare for the festival

But the period of relaxation is short-lived; it is the time of the festival, a time for the Santals to show gratitude to their animals. In this part of the world, the cow is still the backbone of agriculture. Tractors have not yet replaced the humble ‘go’ or cow. 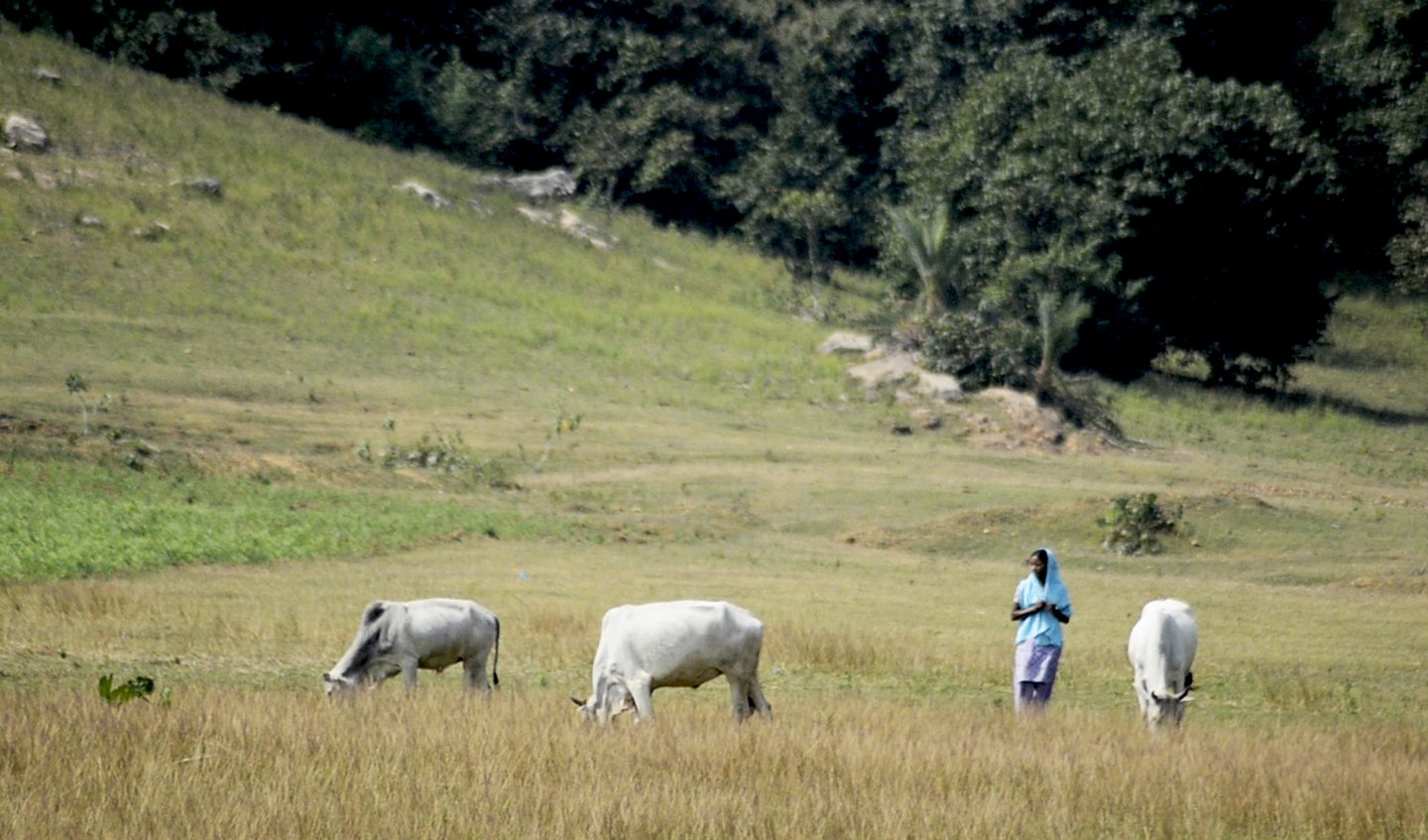 This is the post-harvesting celebration called go-bnadna, or the festival of the cow, which coincides with Diwali. (In Bengali, ‘go’ means cow and ‘bnadna’ means worship.) There is painting, dancing, music, food and sports.

A few villagers get busy at the nearby Gajaburu and Dholburu hills, collecting stones and soils for the various colours they will use in the wall paintings. Some travel even further to collect the ghong creeper, which is an important ingredient in the preparation of the white colour they use to paint their courtyards.

A few villagers get busy at the nearby Gajaburu and Dholburu hills, collecting stones and soils for the various colours they will use in the wall paintings

Members of the one family of potters or kumbhakars in Parkidih are experts in a style of painting called ‘ poli matir noksha ’ (designs made from river silt). They supply specially-made clay to others in the village as well. The kumbhakars have become an integral part of this festival.

The cowherds are in the forest, washing all the cows of the village in the lake, in preparation for the festival. The animals enjoy this special bath. At the same time, some villagers are busy washing their ploughs and other tools of agriculture in nearby ponds.

All the cows of the village get a wash in the lake, while some villagers wash their ploughs

Bhagu Mudi, around 65, is the veteran musician of the village, and an expert in leatherwork. People in Bengal who do this work are usually from the Dom community. Mudi repairs the leather parts of his dhol (drum) and the madol (a hand drum that keeps rhythm, and a part of every Santal home) and other instruments. He trains the youngsters of Parkidih to play the drums for the festival. On the first night of go-bnadna , his job is to lead his troop to every cowshed in the village and perform the songs of go-jagania , which when played keeps the cattle awake all night. The villagers believe these songs protect their cattle from the evil forces of the night.

Bhagu Mudi is the village's veteran musician; he trains the youngsters of Parkidih to play the drums for the festival

Relatives and labourers working in different parts of India return home to Parkidih, their village, to participate in the festival. The members of the only family that produces local liquor – from the flowers of the mohul tree – are working night and day.

Elders and children alike wait for the festival to begin

In 2014, when I visited the village, the militant Maoist presence in the region had diminished and there were no paramilitary forces. Moreover, the rains were plentiful. This little prosperity allows the villagers to book groups of Chhau dancers for the second night of the festival in the school compound. 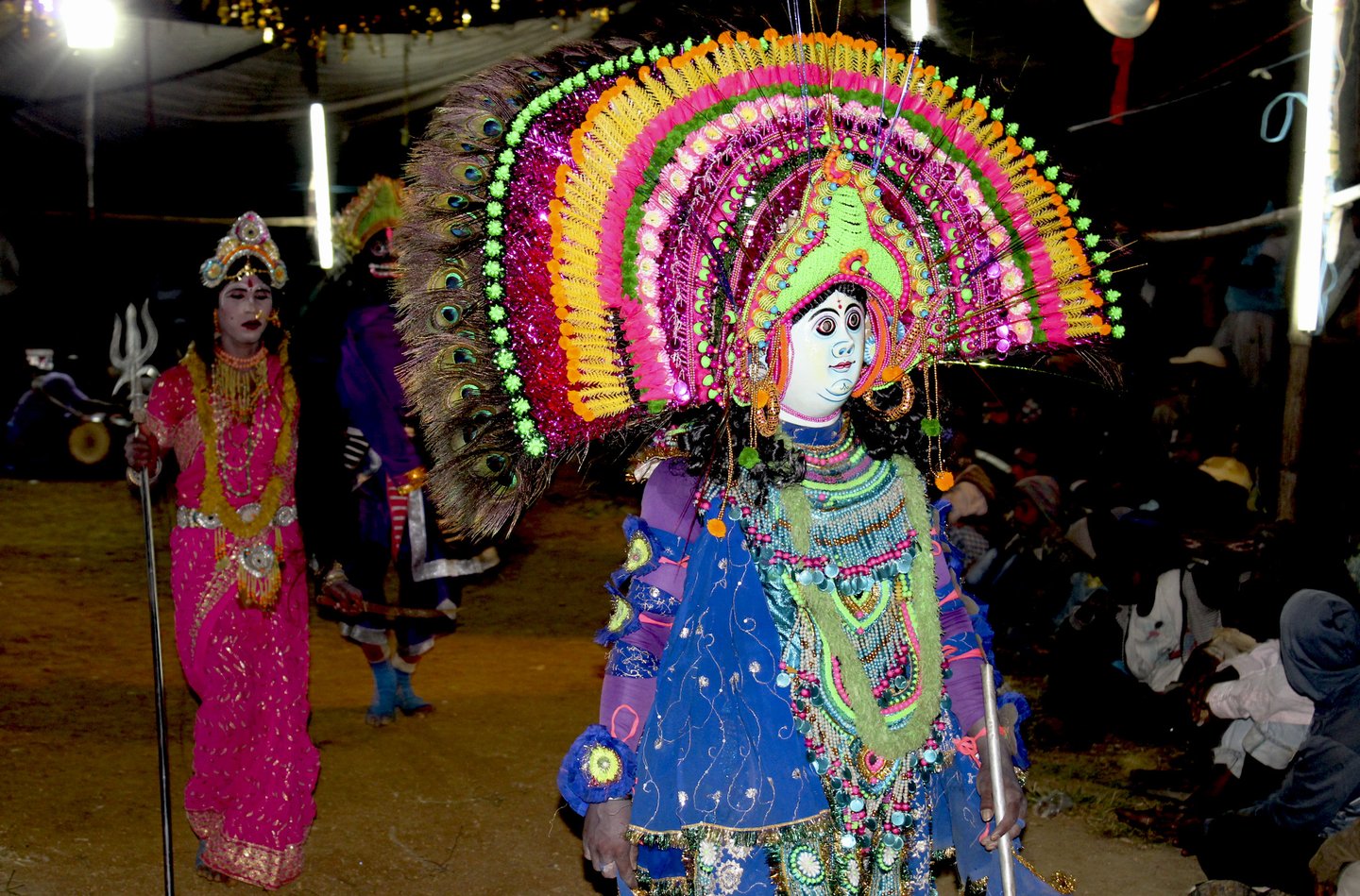 Women are busy on the husking pedals or dhneki . This locally-made implement is used to crush rice grain. The resultant rice powder is used as a colour as well as an important ingredient in various foods prepared for the festival. Each family uses at least four kilos of this powder to decorate their courtyard to welcome the cows as they return from being bathed in the lakes. Purulia is one of the poorest districts of India, but this festival is a time to forget the sorrow and distress of the whole year – using some extra grains for the decorations is a part of this process of celebration.

Husking pedals are used to crush rice grain into powder, which is an important ingredient in various festival foods 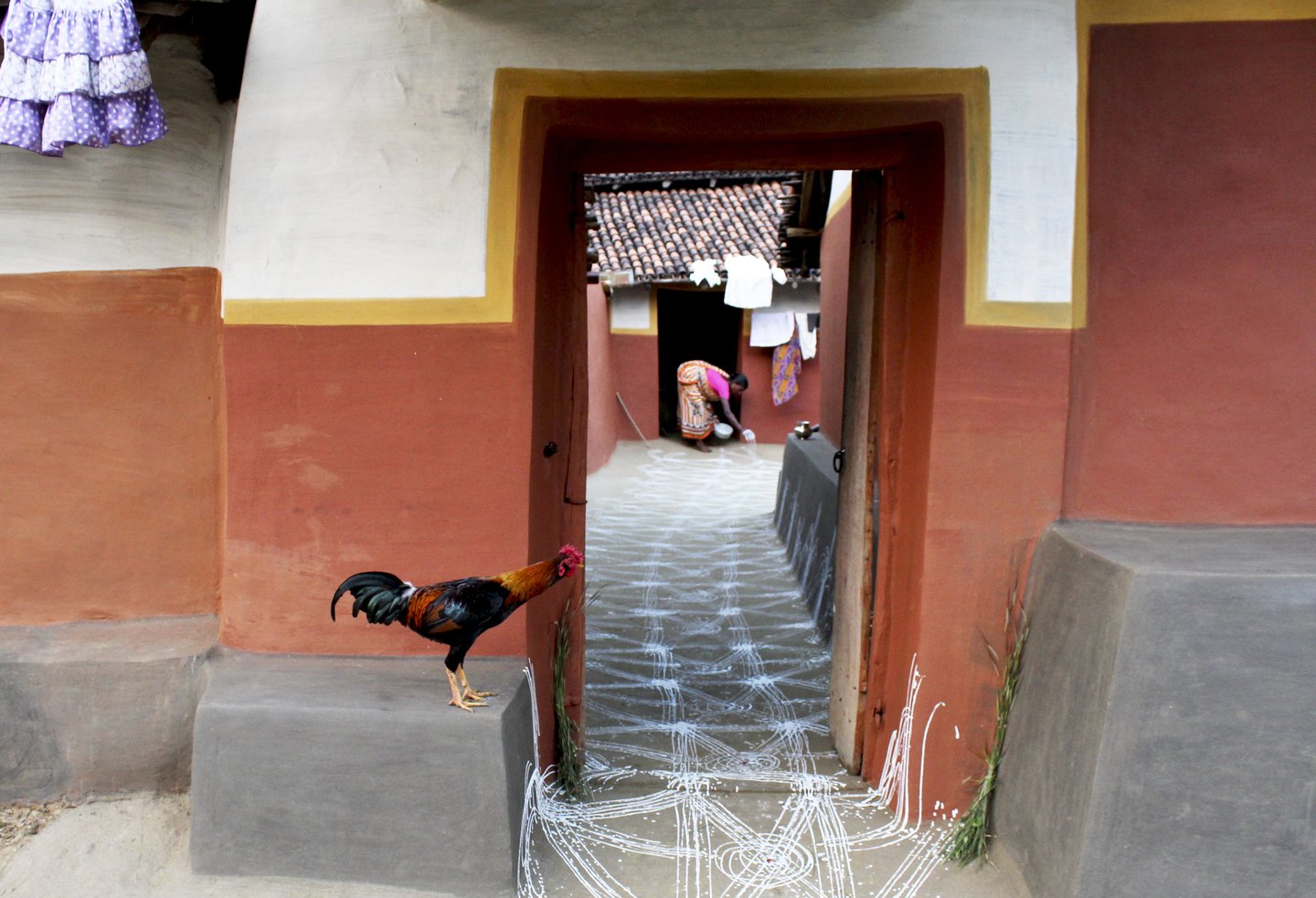 On the third and last day of go-bnadna , fun and games abound. All the rituals are centred on the animals of the community, especially the cows. Villagers paint their cattle, worship them, and prepare headgear for them with paddy. The cowsheds also receive a fresh coat of paint. 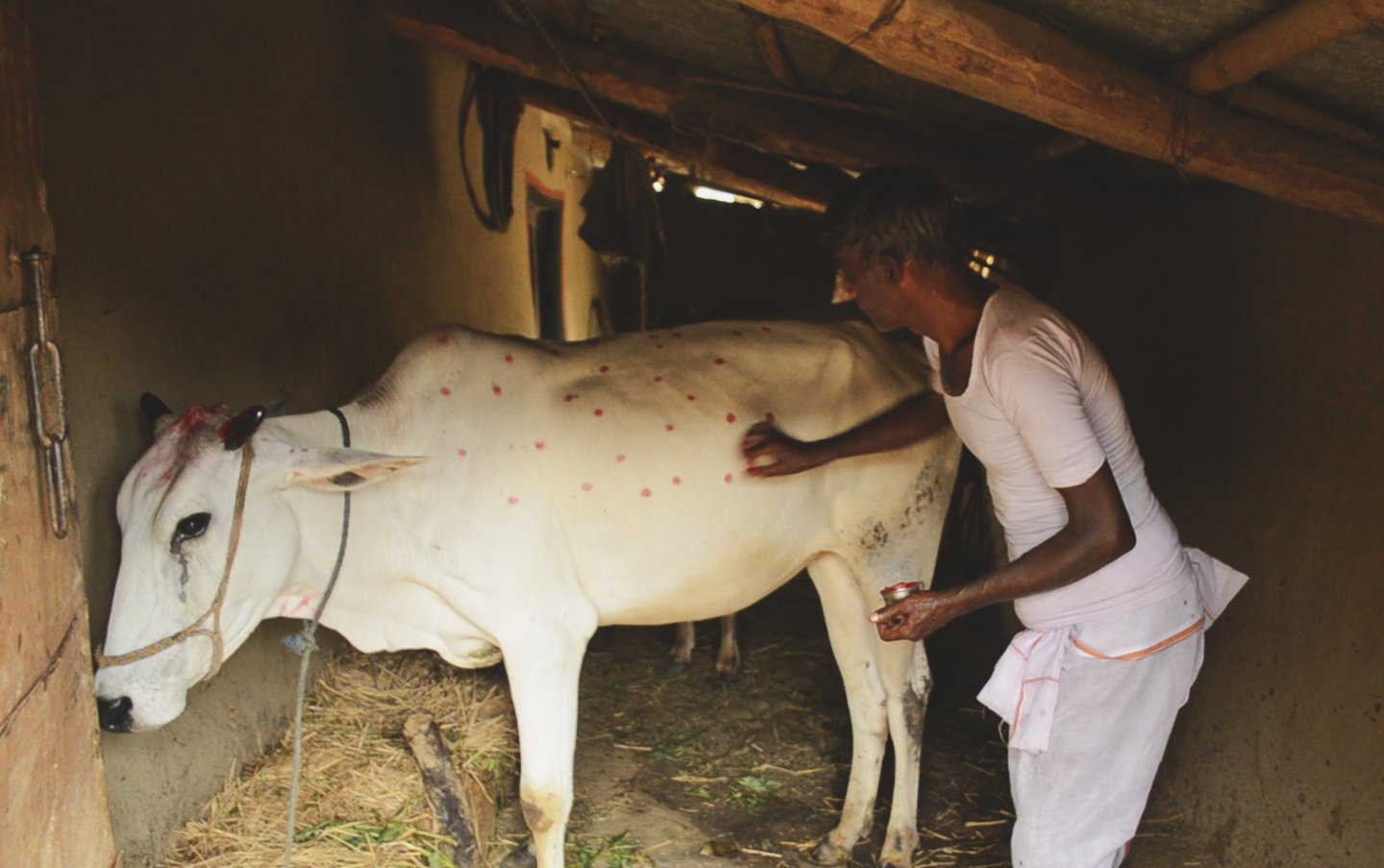 On the third and last day of ‘go-bnadna’, the people of Parkidih paint their cattle, worship them, and prepare headgear for them with paddy

But the main event, the game of gorukhnuta , is in the evening. The 35-40 village cows are tied to bamboo sticks with ropes. Bhagu Mudi, the band leader, goes in front of each animal with the drums and songs. Some of the cows respond by jumping up and the excitement grows. People clap. The festival is officially over. 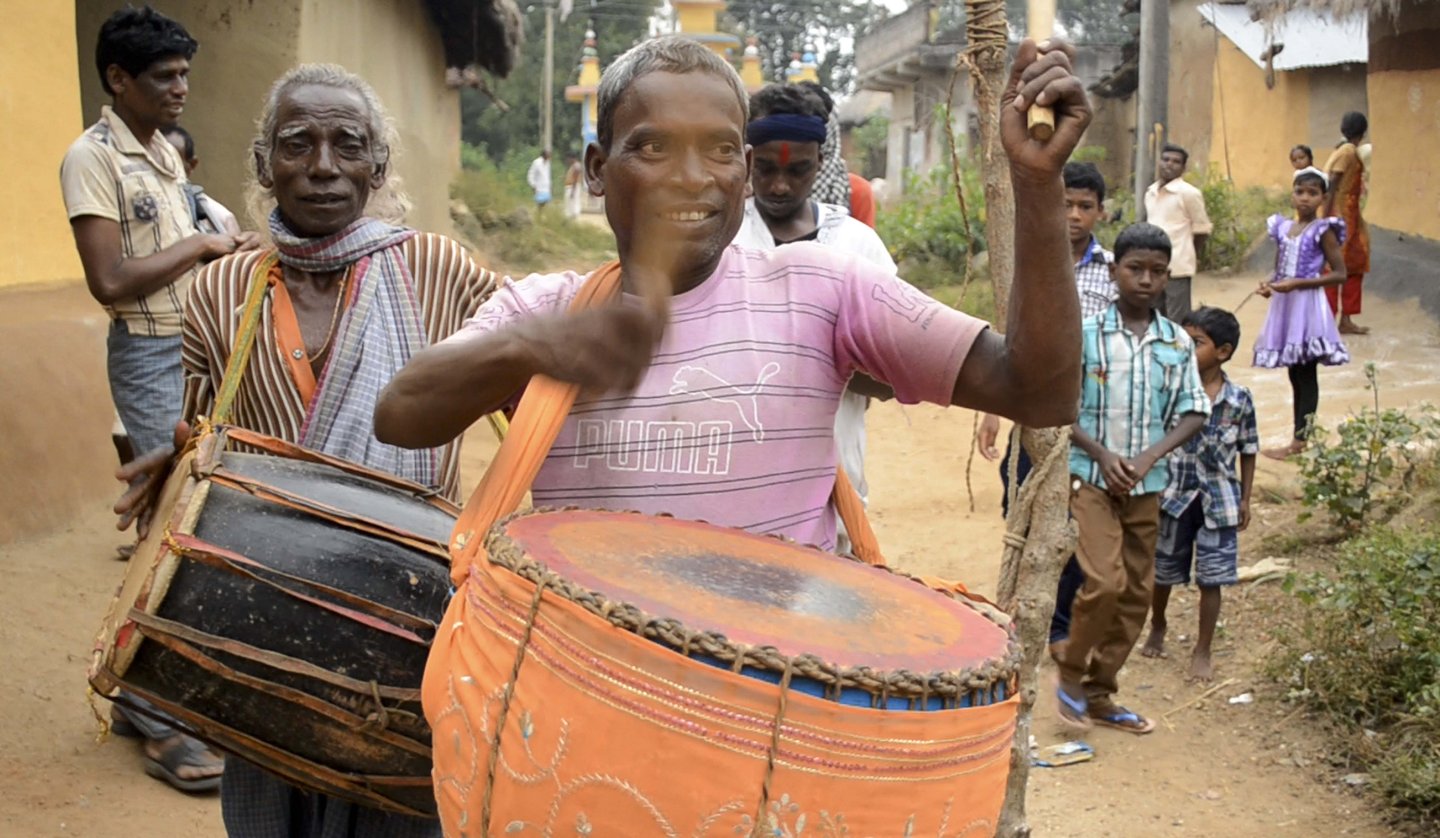 The band leader goes before each animal with the drums and song; the excitement grows…

The Santals use their cows for agriculture, protecting and worshipping them with sincerity and faith for the role they play in harvesting. But they don’t have any taboo against eating them when the animals become old, unlike in other parts of India where cows are regarded as sacred creatures and have become a tool of politics.

View: When the cows come home in Parkidih