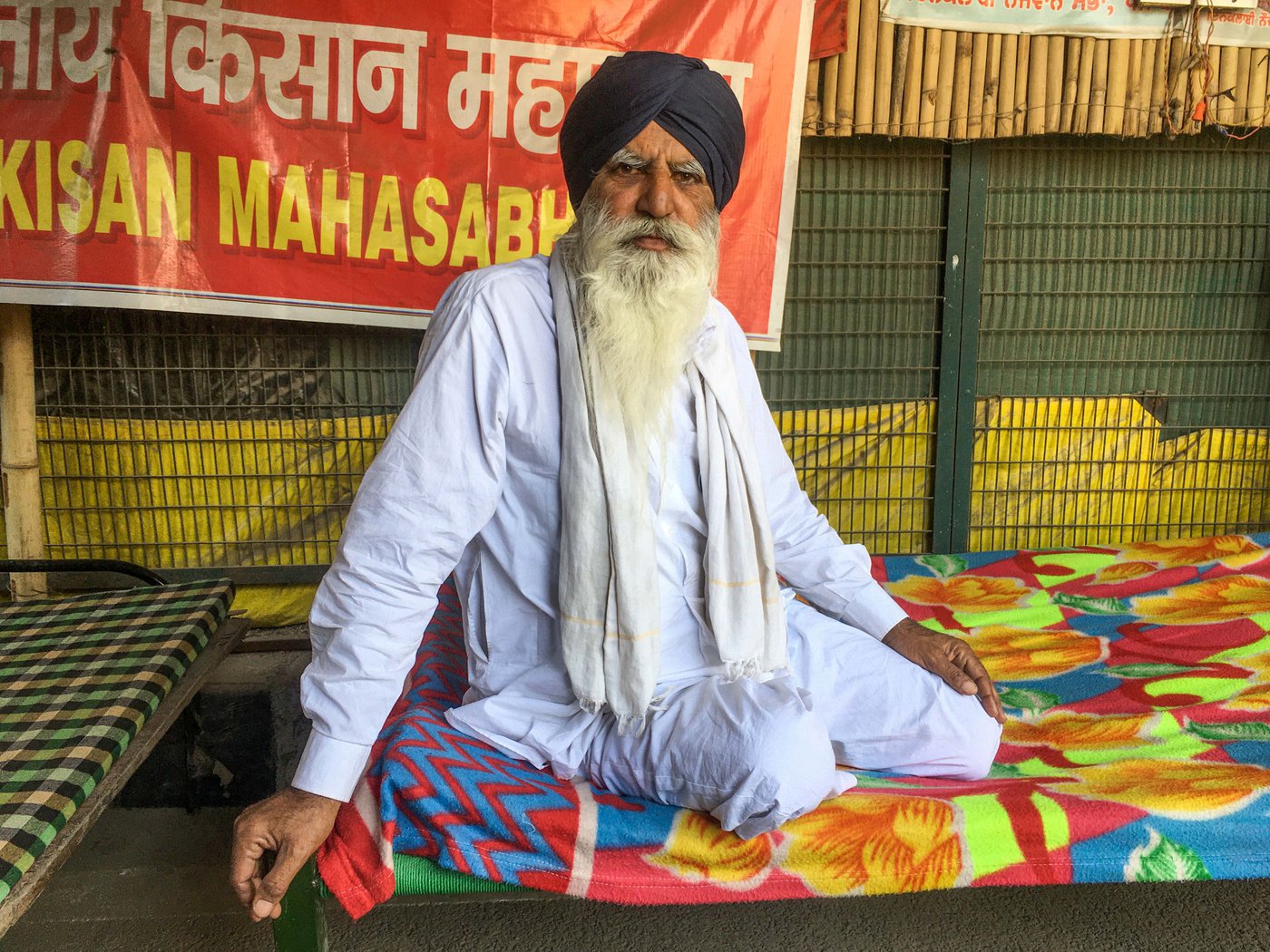 Tikri farmers: ‘Will remember all this for life’

At the farmers’ protest site in Tikri in West Delhi, many are cautious about the news of the repeal of the farm laws – and speak of the price they have paid, and the long, difficult road ahead

“ Baapu, tu aa jaa [Grandpa, you come back],” Tanna Singh’s grandson often tells him on the phone. “How can I return? After all, I am here only for his future,” Singh says, sitting on a plastic stool near his tent.

“I feel like crying every time I hear from him [my son’s 15-year-old son]. Who would leave his grandchildren behind like this? Who leaves his son and daughters behind like this?” he adds, in tears.

Tanna Singh though has been determined to not go back, whatever the reason. He hasn’t left the farmers’ protest site in Tikri for a single day since November 26, 2020. And despite the announcement by the prime minister nearly a year later, on November 19, 2021, that the three contentious new farm laws will be repealed, Singh, 70 years old and a widower, says he will remain at Tikri till the actual repeal is stamped and sealed. “We are waiting for the president’s stamp to revoke these laws. We have left our home only for this day to arrive,” he says.

He is among the tens of thousands of farmers who came to the capital’s borders a year ago demanding that the three farm laws must be scrapped, and stayed on at Tikri (in west Delhi), Singhu (north-west of the capital) and Ghazipur (in the east) when not allowed to go further.

Singh came here from Bhangchari village in Punjab’s Muktsar district with a few other farmers on his tractor, which remains parked somewhere near the protest site. In his village, his family cultivates wheat and paddy on their eight acres. “I have come here leaving the responsibility of our khet [farmland] with my son,” he says. 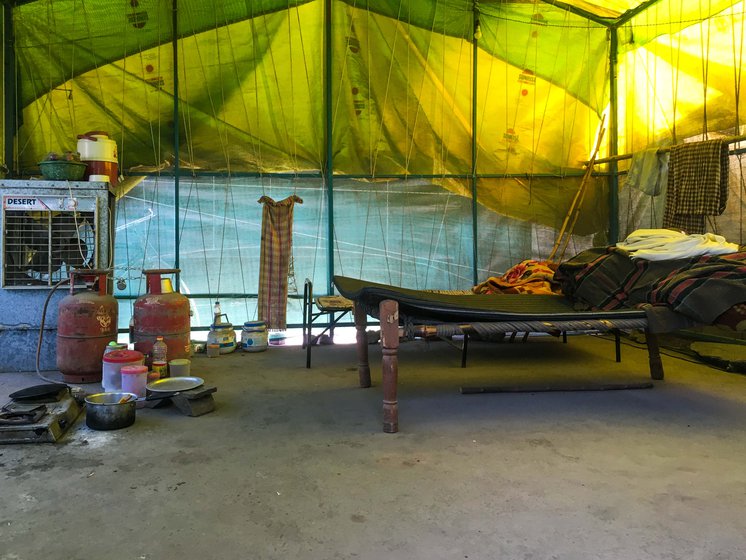 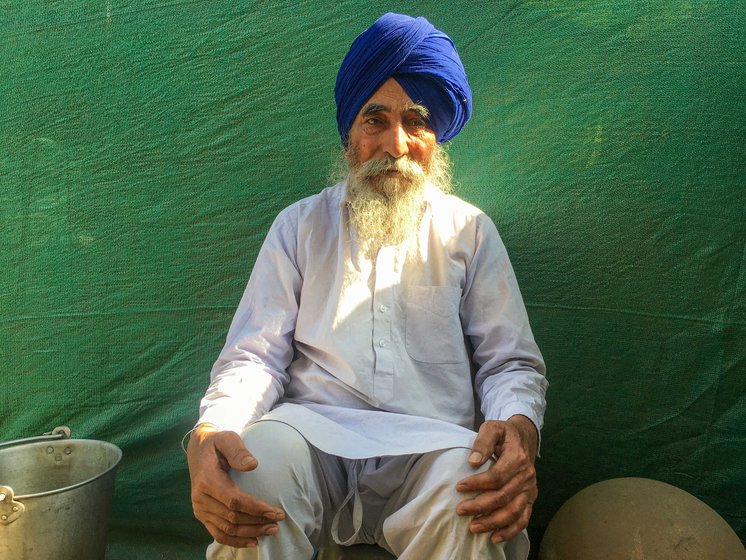 Tanna Singh's 'home' (left) for the last one year: ' Many things happened, but I didn’t go back home [even once] because I didn’t want to leave the morcha '

It’s been a hard year for him, a year of loss. Two relatives died during this time – an uncle’s son, and his sister-in-law’s grandson. “He had just completed his masters. He was so young... but I didn’t go back,” he says. “Many things happened in the last one year, but I didn’t go back home. I didn’t go because I didn’t want to leave the morcha [protest].”

There were moments of joy too back home that he missed. “My daughter gave birth to a child after 15 years, and I couldn’t [make myself] go back. I didn’t [even] go to see my grandson… When I return, I will first go to meet them. I have only seen him [now 10 months old] in photos on the phone. He is a such beautiful child!”

In another makeshift tent on the same road, near the divider and with a Delhi metro line running just above, Jaskaran Singh tells me: “We left behind the comfort of our home to stay here on the streets in protest. It is not easy when you don’t have a proper roof over your head.”

It’s been a year of harsh winter nights and summer days, he says. But the worst weeks were during the rains. “It was hard for anyone to sleep during those nights. Many times, the roof would blow away with the winds. Whenever that happened, we would just fix it back.” 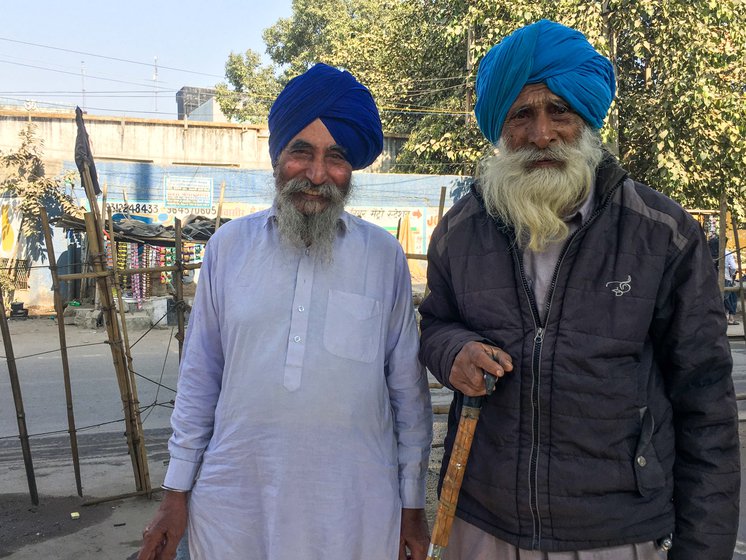 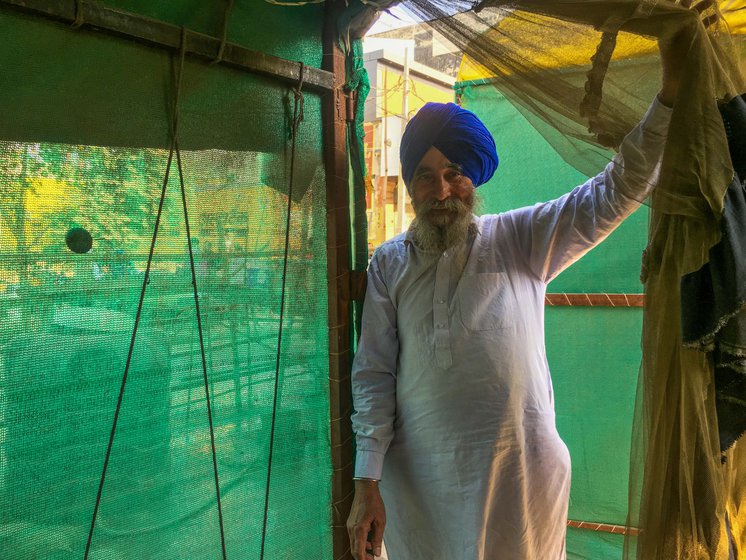 Tanna Singh with 85-year-old Joginder Singh, who has been staying in the same tent, as did many others who came from his village to the protest site

Jaskaran ( in the cover photo on top ) has been coming to the protest sites on and off in rotation with others from Bhikhi in Mansa district. At home, he cultivates wheat and paddy on his family’s 12-acre farmland. His son was electrocuted to death, his wife passed away some 18 months after that incident. He now lives with his 80-year-old mother, a daughter-in-law and two grandchildren.

He was on his way to Tikri by bus on Friday last week, the day the PM announced the repeal, along with four other farmers from his village. “We were neither in our village nor had we reached Tikri when the announcement came – to be able to celebrate with everyone,” says 55-year-old Jaskaran. Soon, he got a call from his mother asking him to return, since the protestors’ demand had been met. But, he says, “We will wait until the laws are revoked in Parliament,” referring to the winter session scheduled to start on November 29. “We are happy that we farmers were of use [in this protest]. But we will really be happy only when these laws are repealed and we return home.”

Returning to their villages though will not be easy either, says Paramjit Kaur, who came to Tikri from Kotra Korianwala village in Bathinda district. “Our hearts will find it difficult. We will miss the homes we have built here, built with our hands, and in very difficult times. We have made sure there is every facility available here, just like back home in Punjab.” 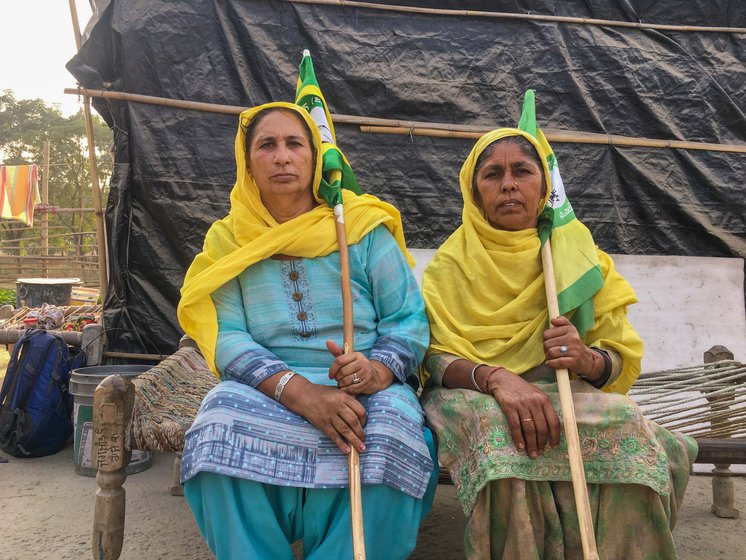 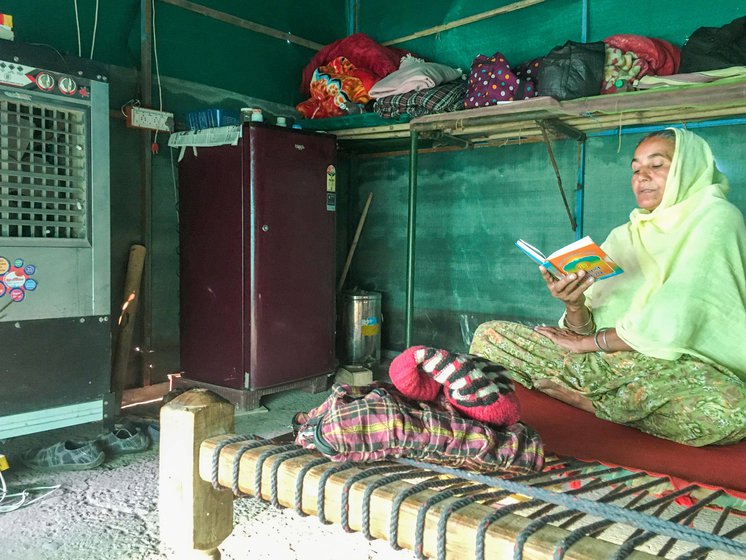 Paramjit Kaur (left) with Gurjeet Kaur, both from Bathinda district, and other women farmers have stayed in tents (right) at Tikri since last November. 'Our hearts will find it difficult [to return to our villages]', Paramjit says. 'We will miss the homes we have built here, built with our hands, and in very difficult times'

On the divider of the highway near Bahadurgarh in Haryana, not far from their tents, she and other women farmers have been growing green vegetables, tomatoes, mustard, carrots and potatoes. The day I met her, she was cooking spinach, harvested from this ‘farmland’,  in a big vessel for lunch.

It will also be a struggle to mend hearts due to several memories and losses, Paramjit adds. “We will remember all those 700 of our people who died during the protests. We were very sad when three women protestors died after a truck ran over them. They were returning home for Diwali after spending about 10 days here. They all were very happy, and were waiting for an autorickshaw on a divider when this happened. We couldn’t even bring ourselves to eat that night. The Modi government doesn’t care about any of this.”

During the January 26 tractor parade, adds Paramjit, who is around 60 years old and a women’s leader of the Bharatiya Kisan Union (Ekta) (Ugrahan) for her district, Bathinda, “So many were injured with lathis and sticks. They also fired tear gas at us, and slammed us with cases [FIRs]. We will remember all this for life.”

The farmers’ struggle will not end with the repeal of the three farm laws, she reiterates. “None of the governments [who have been voted to power] have ever thought about the farming community. They only think about themselves. We will go home and meet our children, play with our grandchildren. But then we have other farm issues to fight for.” 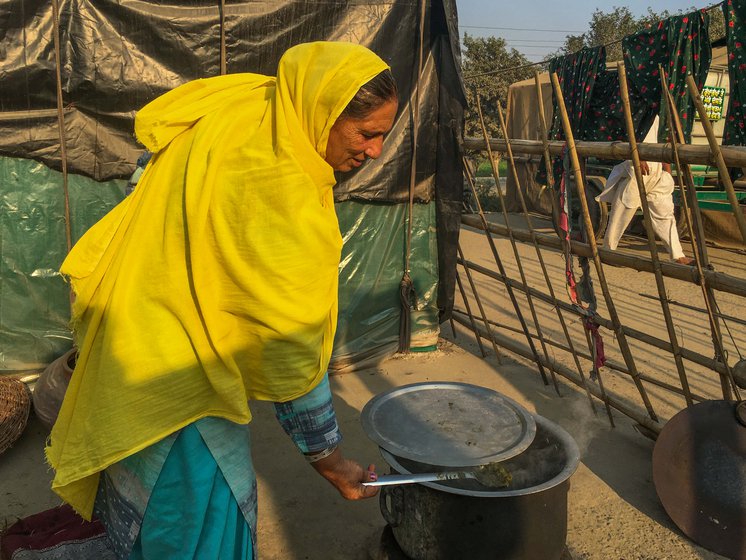 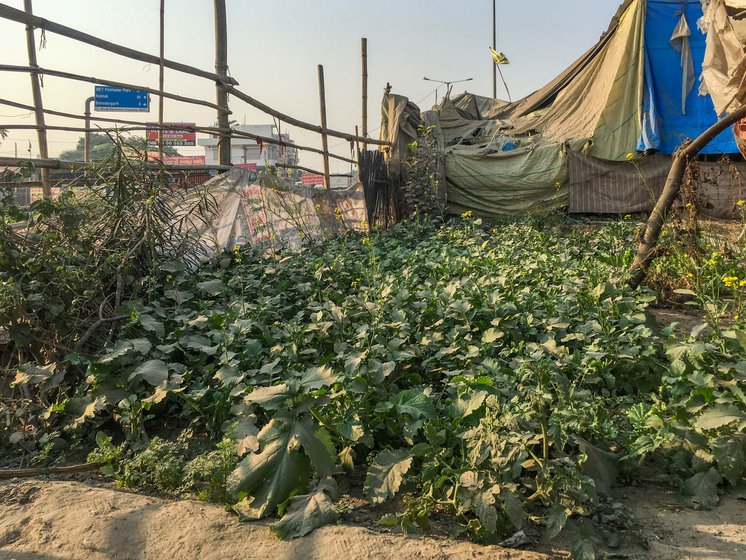 On the divider of the highway not far from their tents, Paramjit and other women farmers have been growing vegetables. The day I met her, she was cooking spinach harvested from this ‘farmland’

“We still doubt his [Modi’s] intentions,” says Jasbir Kaur Natt, 60, state committee member of the Punjab Kisan Union from Mansa district, who too has been camped at Tikri. “In his announcement he said he failed to persuade a section of farmers despite his efforts, which means he still believes that bringing these farm laws was a right decision. We are waiting for what was announced to be given in writing. Then we will also look into what is written, because they often tend to play with words.”

Jasbir lists other pending demands, including revoking the Electricity (Amendment) Bill, 2020, as well as the stubble burning ordinance. “We know the government may agree to these demands,” she says, “but they will not move forward in providing a guarantee on MSP [minimum support price]. Then there are others things we demand: take back all the police cases filed against the protesting farmers, compensate the farmers for the damage to their tractors. So we are not going to leave anytime soon.”

On Sunday, November 21, the Samyukt Kisan Morcha, the umbrella body of around 40 farmers’ unions protesting against the farm laws, confirmed that their agitation will continue as planned – including a kisan panchayat in Lucknow on November 22, gatherings at all the Delhi border points on November 26, and a march to Parliament on November 29.
#new-farm-laws #Samyukta-Kisan-Morcha #Bharatiya-Kisan-Union #Tikri #repeal #farmers-protests #Singhu #MSP
Sanskriti Talwar

Other stories by Sanskriti Talwar