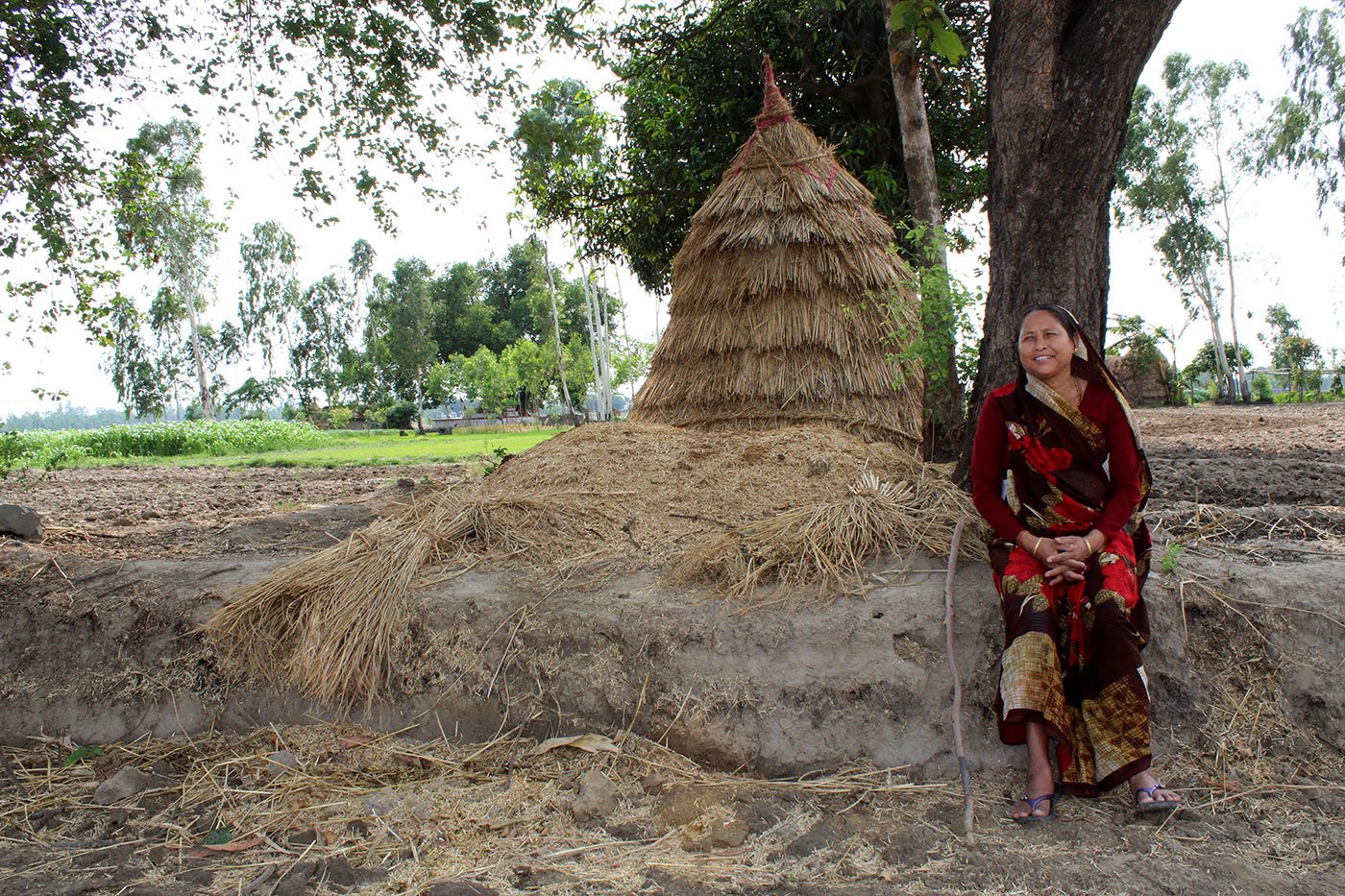 ‘This land is mine. I will get it back’

Many Adivasis have lost their land in Uttarakhand. But Kamla Devi of Pindari village and Mangola Singh of Nandpur are resisting usury, fraud and gender prejudice to get back their farmland and secure their rights

From the earth that Kamla Devi toils on, waves of nostalgia and pain rise to meet her. Her family once owned 18 acres of land. “I employed labourers, now I am one of them,” she says, quietly.

Kamla is from the Tharu community, a Scheduled Tribe that lives in the largest numbers in Udham Singh Nagar, a fertile district on the outer foothills of the Himalayas. Her people are counted among Uttarakhand’s earliest settlers and among its most disadvantaged.

In a state where one in every 35 persons is from an ST community, many like her have lost their land to non-tribals. For Kamla, the loss came wrapped in promises of low-interest indefinite loans whenever the family needed them.

“We needed to borrow money for my father-in-law’s illness. Then for my husband’s. There were sisters-in-law to marry…” her voice trails off.

In Pindari village of Sitarganj tehsil , where Kamla, now 47, first came as a young bride 28 years ago, her father-in-law, Tola Singh, was a prosperous farmer. As a measure of the family’s affluence, she waves her hand across the span of her courtyard. “In the harvest season, this entire space would be filled with grains. Lalas (traders) would send their men and trucks to buy wheat and rice from us,” she says. 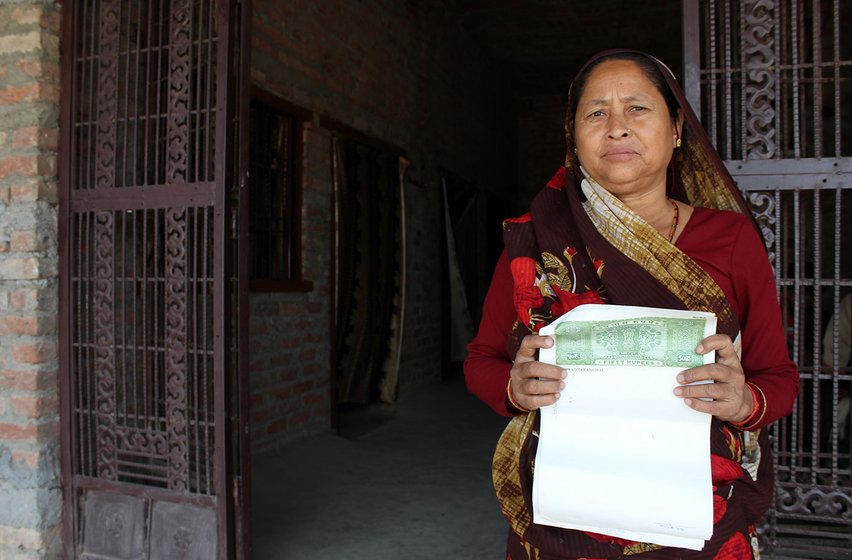 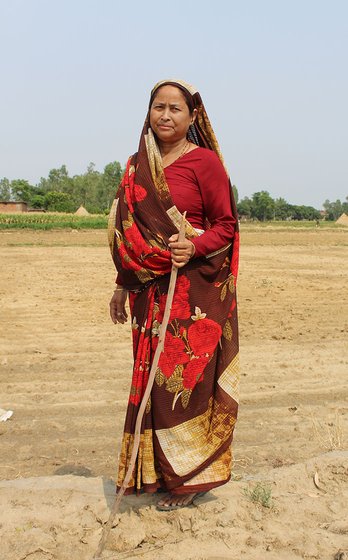 Kamla Devi's family once owned 18 acres, but she now works as a farm labourer. Left: Holding a blank stamp paper signed by her husband

Kamla does not remember the first time the family needed a loan, as it was the men who managed such affairs. But she recalls vividly a day in the winter of 2005 when a moneylender, who ran a clothing store in the nearby city of Sitarganj, stationed himself in her home.

“From morning till night, he sat near my husband. He had a local with him. ‘Give me your land, things will become easy’, he kept insisting. My husband was bed-ridden. By nightfall he was too exhausted to protest,” she remembers. On a single 50-rupee stamp paper that her husband Harish Chandra signed that day, he transferred 3.5 bigha of land (roughly .58 acres) for Rs. 68,360 to one Ram Avtar Goyal, a non-tribal. The legal requirement of permission from the collectorate to make such a transfer was overlooked. No sale deed was registered. Yet, the land was lost.

From 2005 till his death in 2011, Harish inked many such agreements. All the 18 acres owned by the family was slowly mortgaged or sold. Kamla has copies of just four agreements for nine acres.

“There were five children to look after. My eldest daughter was just 17. We lost almost all our land to two moneylenders. I had always imagined it would be mortgaged for some time. When I went to ask them for it so that I could sell some of the land and repay the loan, I was told it had already been sold. It was robbery,” she says. 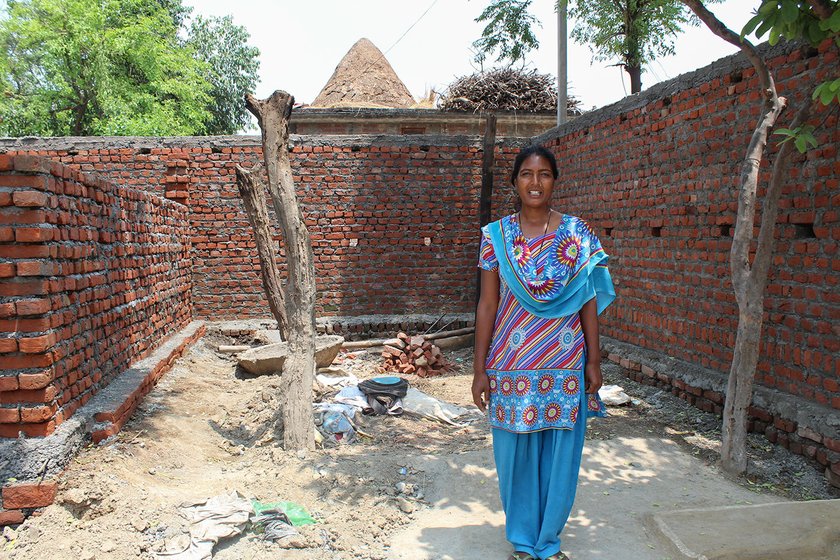 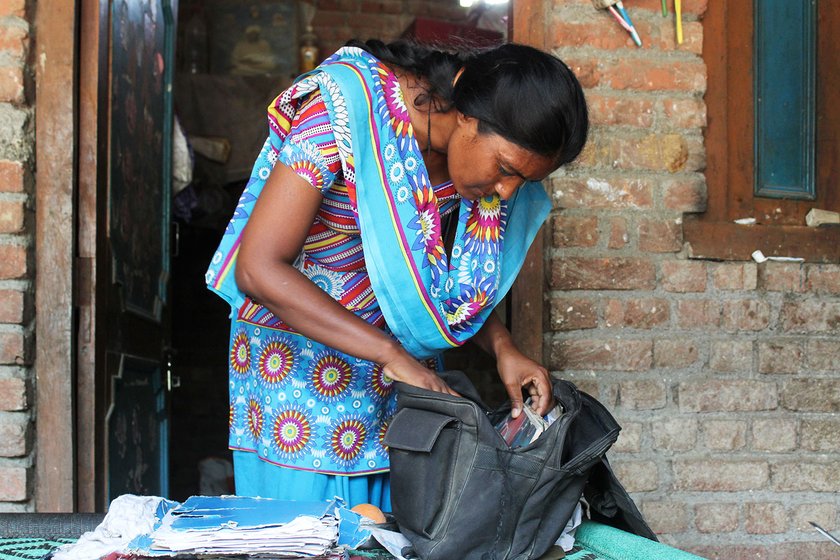 Mangola Singh at the room she has been trying to build for herself in her house's courtyard. Right: Sifting through her growing collection of legal papers

Around 60 kilometres from Pindari, in another village of Udham Singh Nagar, Mangola Singh, a 31-year-old Buksa tribal, incurred a similar loss. “My brother Phool wanted a wedding unlike any seen in the village. He was given to drinking and gambling. I thought the marriage would set him right,” she says to explain why she mortgaged her share of the family’s farm.

Forced into a parental role after her parents died when she was just 11, Mangola, the eldest of three siblings, had learnt quickly to manage the family’s five acres of land “What options did I have?” she asks.

Citing the children’s young age, relatives suggested that Mangola lease out the fertile land to cultivators. Against an annual rent of Rs. 15,000 per acre, paid upfront, this could be done for periods ranging from three to five years. A small patch was set aside for the siblings’ needs. Balancing school, household chores and farm work, she pushed hard for her brothers to get an education. But the elder, Pooran was too sickly, and the younger, too lazy.

Then in 2012 Phool sold off half an acre of land for Rs. 4.5 lakhs. “This land belongs only to us brothers. You have no rights,” he told a stunned Mangola.

“My struggle and sacrifice were nothing. My safeguarding the land since I was a child was nothing. All that mattered was that I was a woman,” she says.

'My struggle and sacrifice were nothing. My safeguarding the land since I was a child was nothing. All that mattered was that I was a woman'

Watch video: The women speak of the fight for their land

In a country where, the All India Report on Agriculture Census 2010-11 says, seven times more men than women own agricultural land, Mangola’s surprise was met with scorn by her neighbours in Nandpur village of Gadarpur tehsil . She pleaded with them to counsel Phool.

“He is a man. He needs the land to manage his life. Why must you interfere in what he does?” they told her. The fact that Mangola did not have the traditional security of a marriage did not matter to them.

A while later, Phool attempted to sell another half-acre. An alarmed Mangola filed a petition in the court of the civil judge in Udham Singh Nagar for a stay on the sale. The plea was dismissed on technical grounds.

In mid-2015, Mangola received a peace offering from her brother. “Show me that you care. Get me married as per my wish. Mortgage the one-acre land that you think you must get [to raise money for the marriage]. I will get it back for you,” he told her.  It is an offer he shows no intention of honouring.

“Six months remain for the mortgage. If I cannot free the land, it will be lost forever. What am I without the land? Even if I want to marry, how will I manage it with no money?” despairs Mangola.

Since 2012, a black bag full of her legal papers, which Mangloa keeps on a ledge in the two-room house she shares with her other brother Pooran, has steadily grown thicker. Her despair has grown in greater measure. 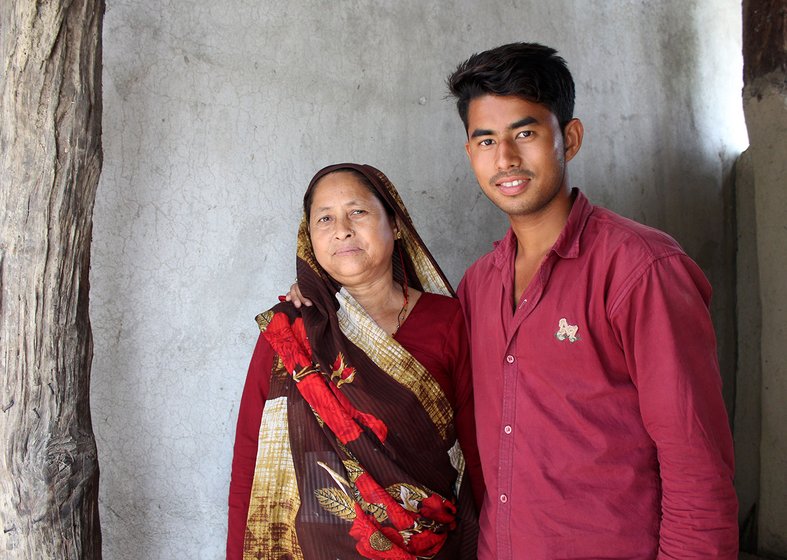 Anil Singh Rana, a 41-year old lawyer based in Khatima town, who is also from the Tharu community, reposes little faith in the legal process for deciding land rights. “Such cases take forever. Traditionally, our communities have been poor at keeping records and papers. The loss of land is never simple. It operates within many layers,” he says.

Rana spent the better part of last decade with the Bhoomi Adhikar Manch (BAM), a network of village-level organisations working on tribal rights in around 40 villages of Uttarakhand. In 2009, two years after its inception, BAM pushed the state government to implement the Scheduled Tribes and Other Traditional Forest Dwellers (Recognition of Forest Rights) Act, 2006, which protects the traditional rights of forest dwelling communities. The Manch’s methods – creating awareness and lobbying– have achieved some success in the fight for tribal land rights.

It was this forum that Kamla turned to in 2012.

“We are simple people. We don’t understand the court. Social pressure is more effective,” she reasons. With her sister-in-law Mina Devi, who was a part of the BAM network of field workers, Kamla started to ask back for her land. “We would go and stand at their [the moneylenders’] shops. Talk to me, show me the papers, I demanded. We also took some other women from the village.”

Last year, her persistence resulted in one moneylender giving back 3.5 acres. While asking that his name not be disclosed, he says, “If all of them [creditors] use this tactic, my business will wind up and I will lose all the land I have in my possession.”

Kamla’s youngest son, 20-year-old Keshav, has now dropped out of college to devote himself full time to tracing the family’s land records so that more effective pressure can be built. His greatest success so far has been the recovery of a blank stamp paper, bearing his father’s signature, from one of the moneylenders.

Mangola’s struggle is strained by the fact that she is pitted against her own brother. The estranged Phool says, “Now that she has taken a family matter to outsiders, why should I settle with her?”

And like many women, Mangola too is not quite able to view her rights over land as an absolute. She struggles to explain that thought: “Not everyone gives land to daughters. The attitude is – let’s give her some as well, but with the consent of male family members. I am not sure that is right.” But, she adds, “The land is our culture, our legacy. We worship it and are nourished by it. And for women like me, it is also a guarantee.”

In Kamla’s mind however there are no such doubts. Standing on the farmland she won back, she speaks with a resolve discovered years after she silently witnessed the signing away of the land.

“The land is mine. I will get it back. I owe it to myself. It does not matter how long the struggle is,” she says.

The author is the winner of the Impact Journalism Award given by N/Core Foundation to create awareness about the importance of secure land and property rights for the poor in India.