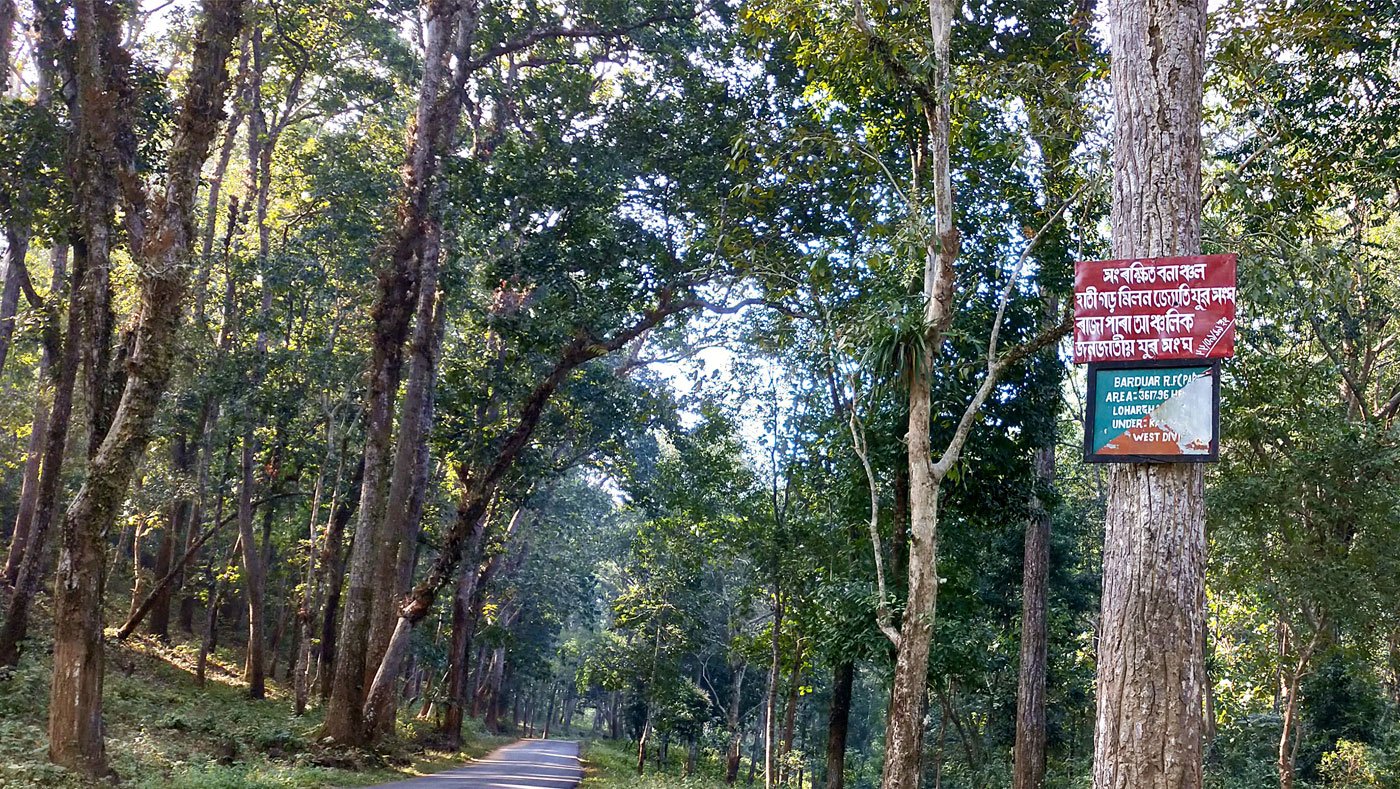 The hill where once hoolocks howled is silent

The hoolock gibbon, an endangered species, is a now rare sight in the forests of northeast India. Last December, some of the apes were spotted by a photography group in Assam’s Barduar Forest Reserve

Rupeswar Boro is excitedly telling us stories about the hoolock gibbon, imitating their movements. He tries to echo the calls of the primates, and gesticulates to show us how they move from one tree to another.

We met Boro in the Loharghat Range Office; he works as a driver with the forest office. He admits to never having seen a gibbon, though. “We have heard the whoops of the giants several times from my home. But they never come close to our village. We hear their calls from the distant hills,” he says. His village, Muduki, in Kamrup district of Assam, is around 35 kilometres from the Rani forest range. His imitations of the ape are drawn from watching reports about them on Assamese television channels.

However, on December 8 last year, members of the Goalpara Photographic Society, who were out on a trek in the Barduar Reserve Forest (contiguous with the Rani range), spotted a pair of the western hoolock gibbon ( Hoolock hoolock ). The bon manuh or ‘wild man’ – as this gibbon is referred to locally – is a rare sight in the Assam-Meghalaya border area.

This species the gibbon, which inhabits the forest tracts of the north-east states in India, as well as eastern Bangladesh and north-west Myanmar, is listed on the International Union for Conservation of Nature’s (IUCN) Red List of Threatened Species . The eastern hoolock gibbon ( Hoolock leuconedys ) inhabits pockets of Arunachal Pradesh and Assam, and southern China and north-east Myanmar; this specie is listed as ‘vulnerable’ in the IUCN list.

“With long and slender arms, hoolock gibbons are swift creatures, barely needing to step on the ground,” notes the World Wide Fund for Nature-India. “They swing from tree to tree in a mode of locomotion known as brachiation, and can brachiate at speeds upto 55 km/hr, covering upto six meters in just one swing!” 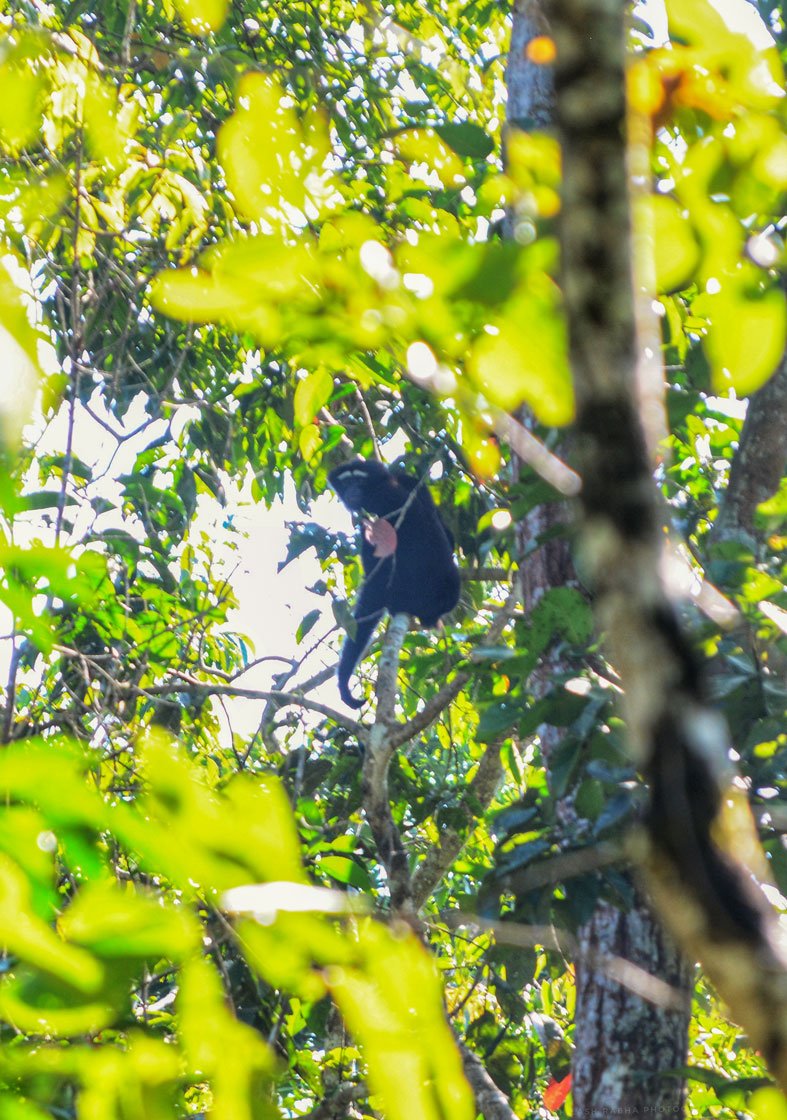 'With long and slender arms, hoolock gibbons are swift creatures, barely needing to step on the ground. They swing from tree to tree at speeds upto 55 km/hr, covering upto six meters in just one swing'

When they saw the gibbons in the Barduar forest, which is a part of the West Kamrup Forest Division in the Chayani-Barduar development block, the members of the Goalpara Photography Society (GPS) took photos of the apes. Indranarayan Koch, a GPS member and primary school teacher from Dudhnoi city of Goalpara district, was there too that day. He showed us a clip of the report about their feat aired by a local news channel in Guwahati. We met him in a remote hamlet called Jupangbari No. 1, around 60 kilometres from Assam’s capital city, Dispur. He was busy clearing a field with a group of youths to set up an eco-camp.

The land is adjacent to the home of Biswajit Rabha, another member of the photography group that spotted the gibbons. It was the first time that Biswajit, who is a local handicrafts artisan, was seeing the ‘giants’. “I haven't seen any here [in Jupangbari No. 1]. This is very rare. We spotted them in the deep jungle,” he says.

“We had been inside the forest for some four hours, clicking photos. It was Ajay Rabha [a member of the GPS] who saw the leaves and branches swaying rapidly at about 30 feet away and signalled to us. The gibbon was among the sal tress. As we approached, the ape speedily moved away, but we saw it – a black hoolock gibbon!” says 24-year-old Abhilash Rabha from Chukuniapara village of Kamrup district, a member of the GPS who runs a piggery farm.

"We have been in search of hoolock gibbons in that area [Barduar] since 2018 and finally found them on the 8th of December in 2019,” says Benjamin Kaman, a founding member of the GPS, and a technical officer in Soil And Water Conservation Engineering at the government-run Krishi Vigyan Kendra, Dudhnoi. “We had heard the whoops of the gibbons, but couldn’t film them or take photographs earlier. And now that we have seen them, we want the government to intervene and do something for the conservation of the giants,” he adds.

The Hulu Kanda Pahar (‘the hill where the hoolock gibbon cries’), in Goalpara district, around 125 kilometres from Barduar, was once a habitat of the gibbons, says Kaman. He is originally from Dhemaji, a flood-prone district of Assam. “In 2018, we made several trips to the jungles of Hulu Kanda, but couldn't find any trace of it [the ape] there,” he adds. During another search mission in the villages of Rangjuli block of Goalpara district, adjacent to the Meghalaya-Assam border, they saw no gibbons either. 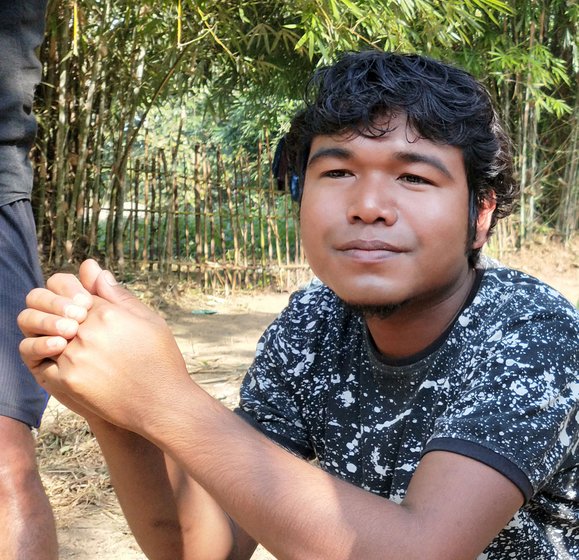 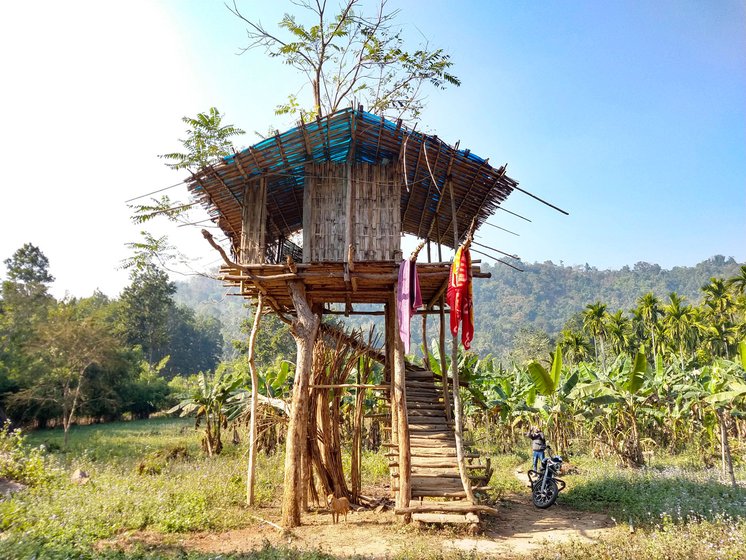 'It was the first time that Biswajit Rabha, a member of the photography group (to the right is the machan to spot elephants on his land), was seeing the ‘giants’. “I haven't seen any here [inJupangbari No. 1]. This is very rare'

That could be because the population of the western hoolock gibbons has been decreasing sharply in the last 3-4 decades – from more than 80,000 to less than 5,000 in Assam “due to habitat loss and fragmentation,” writes Dr. Jihosuo Biswas of the Primate Research Centre NE India. The IUCN Red List notes, “The species was found in all forested patches in northeastern India about 30 years ago, but they are reduced to a few forest fragments now. The total population in northeastern India is now estimated to be over 12,000, of which about 2,000 occur in the state of Assam.”

Although the hoolock gibbon is listed in Schedule 1 of India’s Wildlife Protection Act, 1972, the IUCN Red List has identified several reasons why the numbers of the western hoolock gibbon have been falling, among them: residential and commercial development, cultivation of non-timber crops such as tea plantations, mining and quarrying, and logging and wood harvesting.

The fragmentation and intersection of forests by roads and railway tracks have also disturbed the wildlife in all of Northeast India. The hoolock gibbons disappeared from their habitat in Hulu Pahar when the forest there started shrinking. The Forest Survey of India’s India State of Forest Report 2019 , states that the forest cover in the Northeast declined by 765 sq km from 2017.

“Fragmentation of forests has become a threat to wildlife, and the hoolock gibbon is not an exception,” says Dr. Narayan Sharma, talking to us on the phone. He is assistant professor at the Department of Environmental Biology and Wildlife Sciences, Cotton University, Guwahati. Shifting cultivation [mainly paddy], expansion of tea plantations and human settlement have also destroyed the gibbon population, he adds. “They don’t migrate to distant places unless forced. They live within a tropical undisturbed forest, and are not adapted to walking on the ground. Without dense forest, we can’t expect wildlife to prosper.”

Although the gibbons used to be poached in some parts of the northeast, Dr. Sharma believes this rarely occurs in Assam. “In some parts of the northeast, such as Nagaland, the apes were hunted for meat, though it is rare now. Women of some tribes of Mizoram used to [in the past] wear the bones of hoolock gibbons on their feet believing that it cures gouts. So they used to hunt them for meat as well as for medicinal purposes.”

“They have nothing now to eat there in the jungles. That’s why they come to the human habitats frequently in search of food,” says Nalini Rabha, a retired school headmaster in Rajapara village in the Chayani-Barduar block. “But there is no food for them [here]. We have just some trees of pomelo, star fruit and betel nut in our basti [yards and fields]. All you can see are segun [teak] trees and tea plantations. Where will they go?” asks the elderly man about the gibbons’ food crisis. 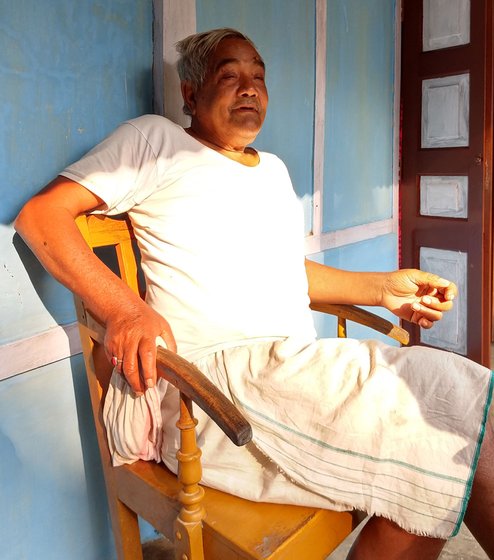 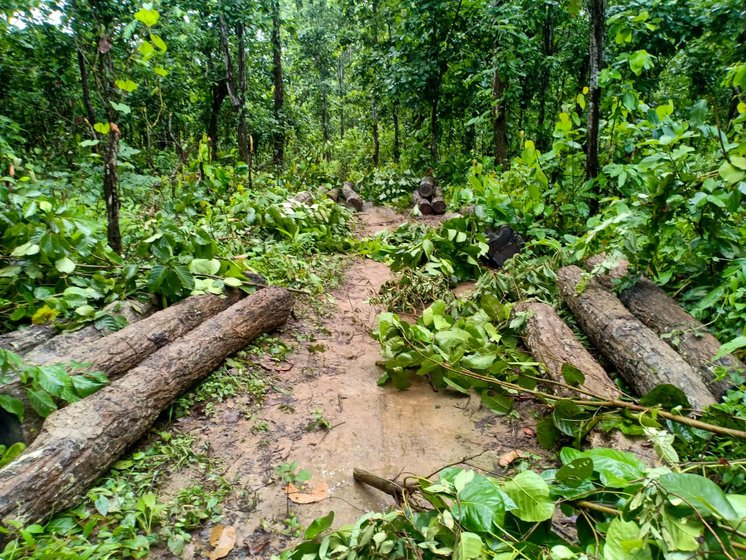 They have nothing now to eat there in the jungles. That’s why they come to the human habitats frequently in search of food', says Nalini Rabha, a retired school headmaster in Rajapara village. Among the reasons for this change is the illegal trade in timber

An adult hoolock gibbon consumes “young leaves, mature leaves, flowers, fruits, petioles, buds and also animal matter… notes a 2017 paper. In addition to a total of 54 plant species, “Fruits accounted for an average of 51% … of feeding time over the year. This highly frugivorous diet may limit the ability of the species to survive in small and disturbed forest fragments.”

“They are very stressed. They don’t like humans in their habitat at all,” adds Benjamin Kaman. “We think they need a protected environment.” We are in Jupangbari No. 1, and a villager interrupts our conversation with the photographers to say that the forest mafia has destroyed everything. “They have cut all the old trees [such as teak and sal ] in this place and supplied them outside. They know only money,” he says.

"Most of the illegal trade of timber takes place through the Rani-Meghalaya road. Some part of the forest shares boundaries with neighbouring Meghalaya, and the smugglers easily manage to transport the timber logs and supply them to [illegal] saw mills in the jungles of that state,” says Indranarayan.

The government seems to be taking some action to revitalise the forests. The state is presently “implementing the Assam Project on Forest and Biodiversity Conservation to restore forest ecosystems,” notes a state government’s website. Besides, Assam has 20 wildlife sanctuaries and five national parks, among them the Hoollongapar Reserve Forest in Jorhat district, which was upgraded to the Hollongapar Gibbon Sanctuary in 1997.

But these remain increasingly fragmented forest tracts, where sighting of the hoolock gibbon is now a rare occurrence. Shantanu Patowary, forest ranger of the Loharghat Range Office, told us on the phone that neither he nor his staff had seen any gibbons in the Barduar reserve forest, which is under his purview.

Meanwhile, Indranarayan and Biswajit Rabha are preparing to build their eco camp to teach others how to live with nature and to respect the forest and its dwellers. They want it to be different from the wildlife camps mushrooming in the state that play loud music and beam harsh lights into the dark night.

Pankaj Das is Translations Editor, Assamese, at People's Archive of Rural India. Based in Guwahati, he is also a localisation expert, working with UNICEF. He loves to play with words at idiomabridge.blogspot.com.

Ratna Baruah is a freelance reporter based in Guwahati. He has a post-graduate degree from the Gauhati University in Communication and Journalism (2013) and has worked in the health sector.