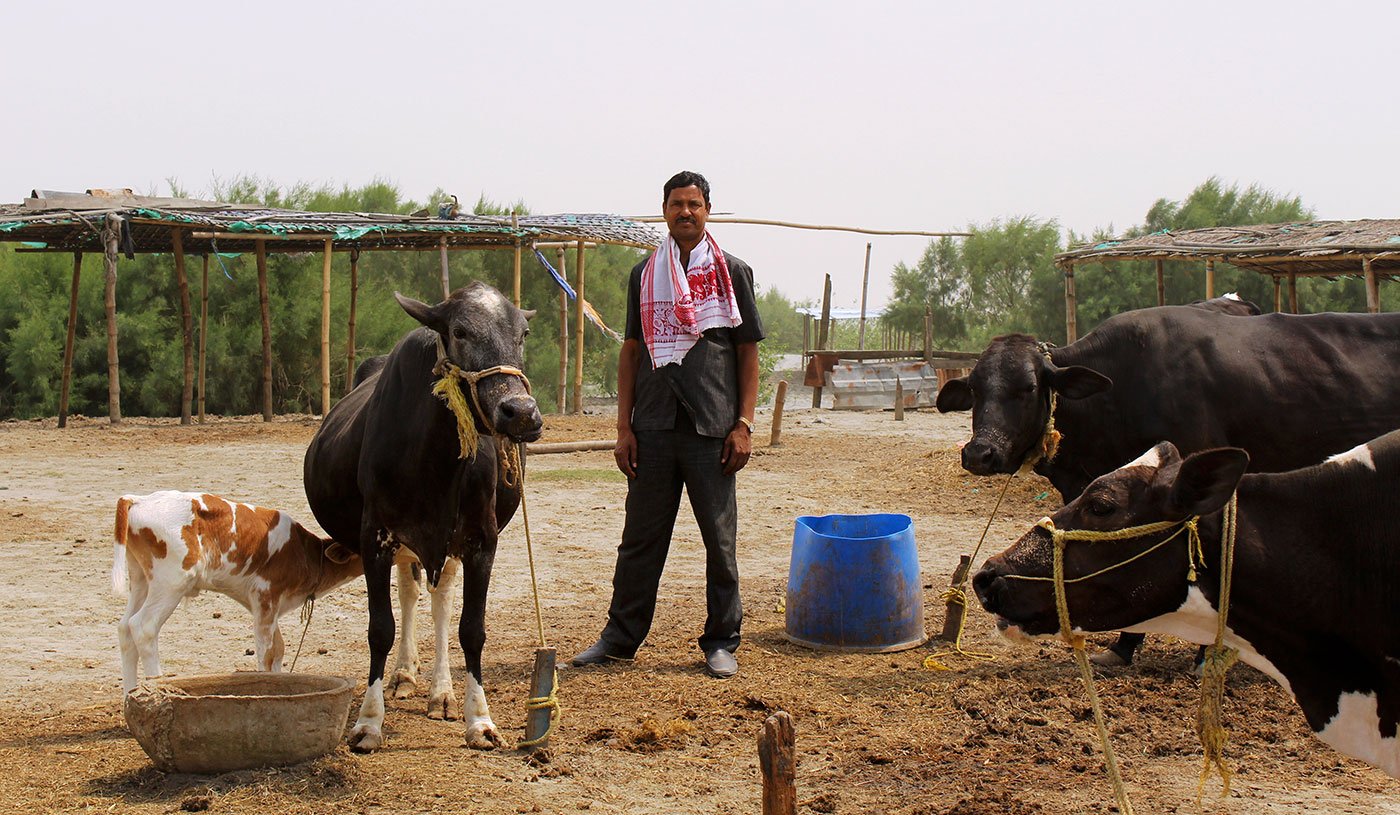 Milk boats from the chars

For the people living on Chalakura island on the Brahmaputra in Assam, dairy farming is the only sustainable livelihood – but a withdrawal of state-subsidised cattle feed has increased the uncertainty of their lives

Early every morning, a machine-fitted country boat leaves Chalakura char on the Brahmaputra river, laden with plastic and aluminium containers full of milk. The boat takes the milk to Dhubri town, roughly an hour away.

Chalakura char is one of several sandy and impermanent islands formed by fluvial processes along the Brahmaputra in Assam (see PARI’s stories from the chars , starting with Struggles of the sandbar people ). The boat returns by noon, and carries more milk to Dhubri town in the afternoon.

The milk is from the Mandal family’s dairy farm on the char in Dhubri district in lower Assam, where the family keeps over 50 milch animals. The farm produces 100-120 litres of milk a day. “When most of our milking cows and buffaloes are at the peak of their lactation cycles, the milk production goes up to 180-200 litres a day,” says Tamezuddin Mandal, 43, and a father of three. Each litre of milk fetches them Rs. 40 in Dhubri town.

The dairy farms on the chars of Dhubri are projected by the government as a success. Behind this, however, is a reality that is threatening their livelihoods – a shortage of cattle fodder

Dairy farming is the most important means of livelihood for the 791 families on Chalakura char. Every household’s animals produce an average of 30-40 litres of milk a day. Tamezuddin is a pioneer of sorts among these families – he introduced high-yielding cross-bred cows on this small island of 5,156 inhabitants 10 years ago. Most of the milk producers on the char now have cross-breeds. The animals are usually brought from the markets of Bihar and, veterinarians say, are typically a hybrid of indigenous and Jersey cows. 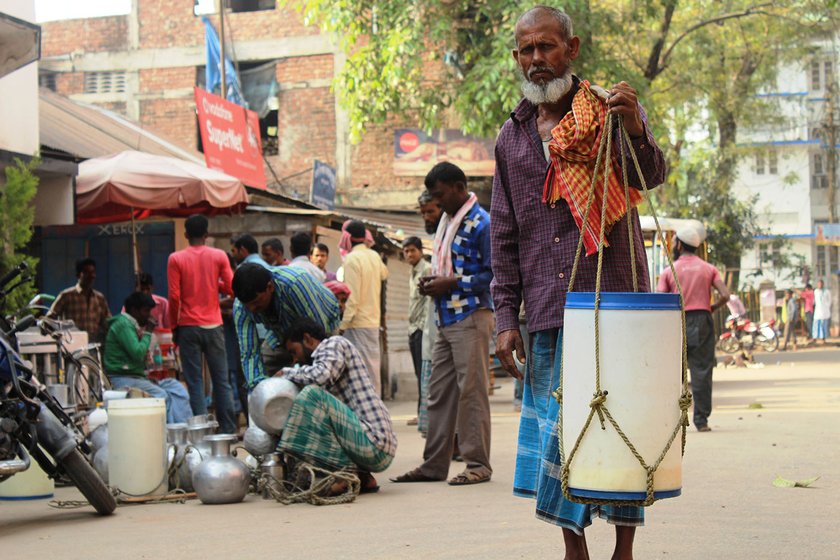 Every morning, dairy farmers from Chalakura char travel to Dhubri town to sell milk. The production of milk supports 791 families on the riverine island

Over time, Tamezuddin has become well-known as a leading milk producer in Dhubri, invited by the district administration for workshops to speak to other agriculturists about taking up dairy farming. He also heads the Chalakura Milon Dugdha Utpadak Somobay Samiti, a cooperative society of 51 milk producers, and one of five such cooperatives on the char .

The dairy farms on the chars of Dhubri district are often projected by government officials as the success story of a people who survive the constant destruction of their lands and property. Behind this success story, however, is a reality that is threatening their livelihoods – a shortage of cattle fodder.

Until 2016, the wheat provided by the centre to Assam under the public distribution system was milled locally and supplied as cattle fodder to dairy farmers at a subsidised rate of Rs. 600 per quintal, explains Dinesh Gogoi, the district veterinary officer at Dhubri. Tamezuddin’s family, for instance, received 25 quintals of subsidised wheat bran every month.

In December 2015, at the Assam government’s request, the Ministry of Consumer Affairs, Food and Public Distribution had revised the state’s monthly allocation to only rice under the Antyodaya Anna Yojana (in a ‘priority’ category) and only wheat under the National Food Security Act (NFSA; in a ‘tide-over’ category). Assam thereafter received 8,272 tons of wheat every month at Rs. 610, and 5,781 tons after July 2016.

But from December 2016, the state has received no wheat under the NFSA. The ministry wrote to the state government on November 30, 2016 that “due to shortage of wheat in Central Pool, it has been decided by the Government of India to allocate rice in lieu of wheat to the States under tide over category during December 2016 to March 2017.” 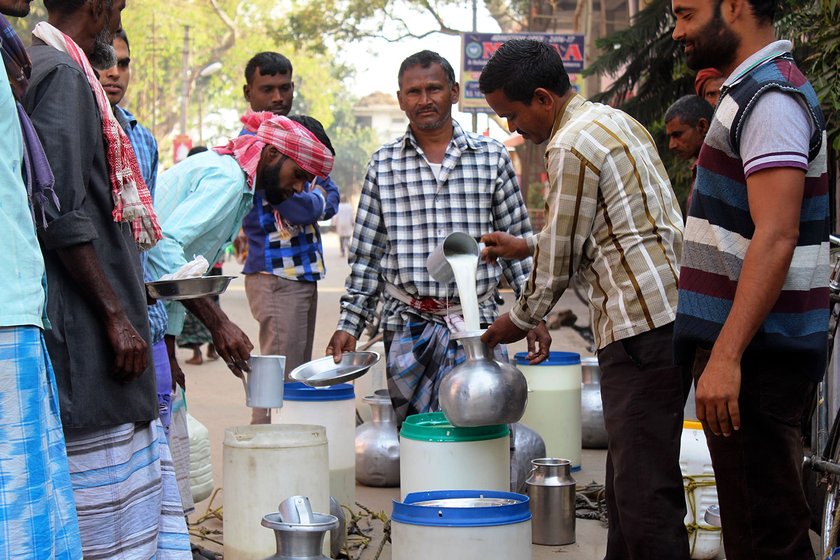 Without state subsidises, milk produces have been forced to buy fodder at high market rates. 'We will survive only if the price of milk increases," says Tamezuddin Mandal

Since then, the milk producers on the chars have not received any subsidised fodder, except for small quantities supplied as flood relief in August 2017. They are now forced to rely completely on cattle feed in the open market, where the price per quintal is a steep Rs. 2,000.

This has sent the cost of milk production spiralling, but the market price of milk is still Rs. 40. "Considering the cost of cattle fodder today, we will be able to survive only if the price of milk goes up to Rs. 50 or more,” Tamezuddin says.

Tamezuddin lives in a joint family of 35. He and his five brothers, Jamir Ali, Omar Ali, Abdur Rahim, Abdul Kasem and Nur Hussain, share the dairy farm work. The family cooks in a single kitchen. They have around two acres of agricultural land, where the women grow different crops. While the family's daily income from milk production may seem substantial, profits are not much when divided between six different family units.

“Dairy farming is a labour-intensive activity," Tamezuddin explains. "Cross-bred cows need fodder round-the-clock. They are prone to diseases and need an attendant all the time.” Timely intervention from a veterinary doctor is difficult in this area, Tamezuddin says, because of the acute shortage of government veterinary staff. When a doctor is urgently needed at night, a special ferry has to be hired, which costs as much as Rs. 2,500-3,000. 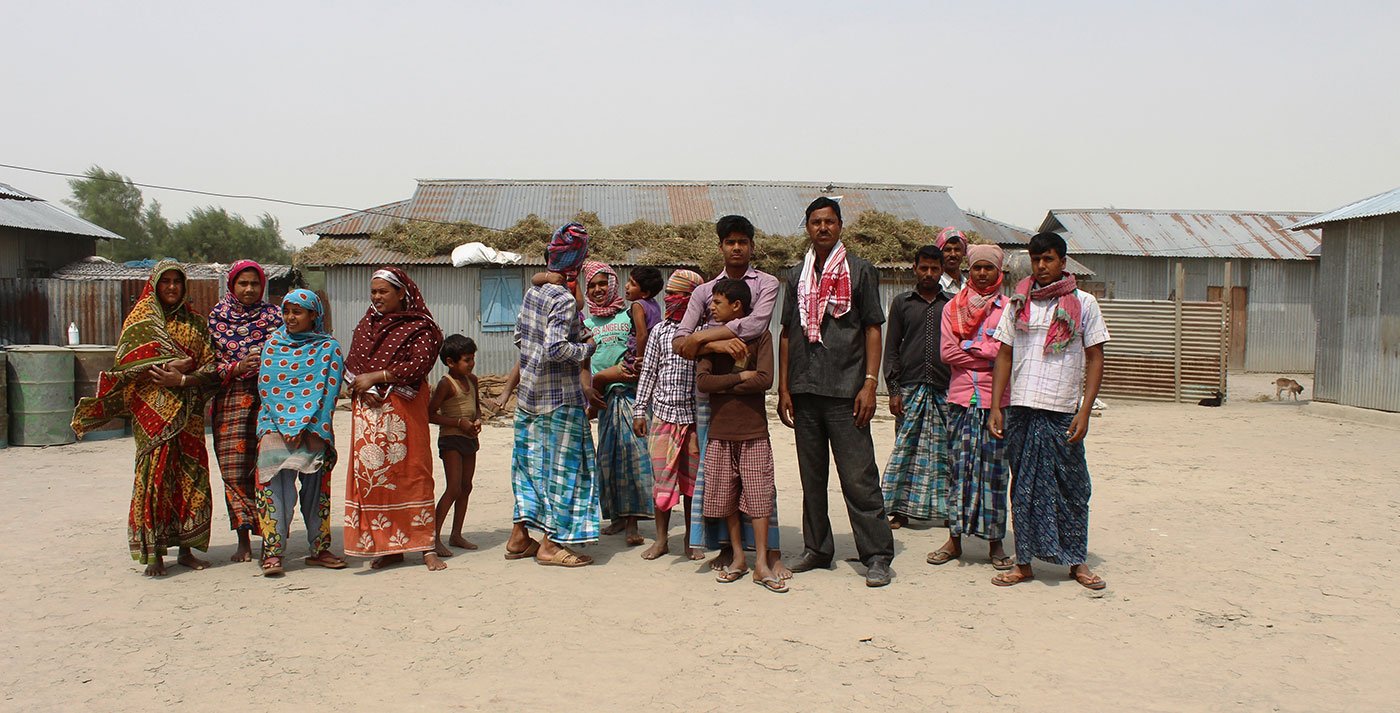 The Mandal family dairy farm produces 100-120 litres of milk a day. However, the profits aren't much when divided between six units of this joint family of 35

All the chars on the Brahmaputra are fragile and prone to erosion, but soil erosion on Chalakura (the very name means ‘movement’) is even more frequent. However, sandbars are equally quick to form close by, allowing the displaced to relocate to the newly-formed sandbar almost immediately. Chalakura char is now a cluster of five different parts, with populations ranging from 135 to 1,452 on each part. Its residents are displaced every three or four years; Tamezuddin has had to resettle 15 times so far.

Over the generations, dairy farming has become an integral part of the char residents’ near-nomadic life. “Amidst such uncertainty and frequent displacement, our forefathers decided to adopt dairy farming as a sustainable livelihood option," Tamezuddin explains. "Unlike standing crops on agricultural lands, which are likely to be destroyed by the annual floods and erosion, cattle are permanent property and can be moved. Whenever we are displaced, we move to a new char with all our household goods and cattle. This movement has become part of our life,” he says.

The steady income from the sale of milk in previous years has enabled most families to replace their thatched houses with innovative tin-roofed and tin-walled structures erected on a folding wooden frame that can be shifted when required.

Watch video: 'The price of milk sold in Dhubri is less than the price at which we have to buy fodder', says Sukuruddin, a dairy farmer

Dairy farming has become a major economic activity on many surrounding chars as well. At least one machine-fitted country boat loaded with fresh milk plies from each char to Dhubri town early in the morning. Now though, the scarcity of subsidised cattle feed is making it difficult for dairy farmers to continue.

Gogoi, the district veterinary officer, says that the Animal Husbandry and Veterinary Department has been arranging meetings to inform farmers about high-yielding green grass as an alternative fodder. Locals are also being trained to function as 'Gopal Mitras' [‘Friends of Cows’] who can take care of minor health problems of livestock. "Five such young people have been selected from different parts of Chalakura char , and the training will be held soon,” Gogoi says.

Meanwhile, the milk boats from the chars are running at a slower pace, and the dairy farmers of Chalakura are hoping the situation improves soon.
Ratna Bharali Talukdar