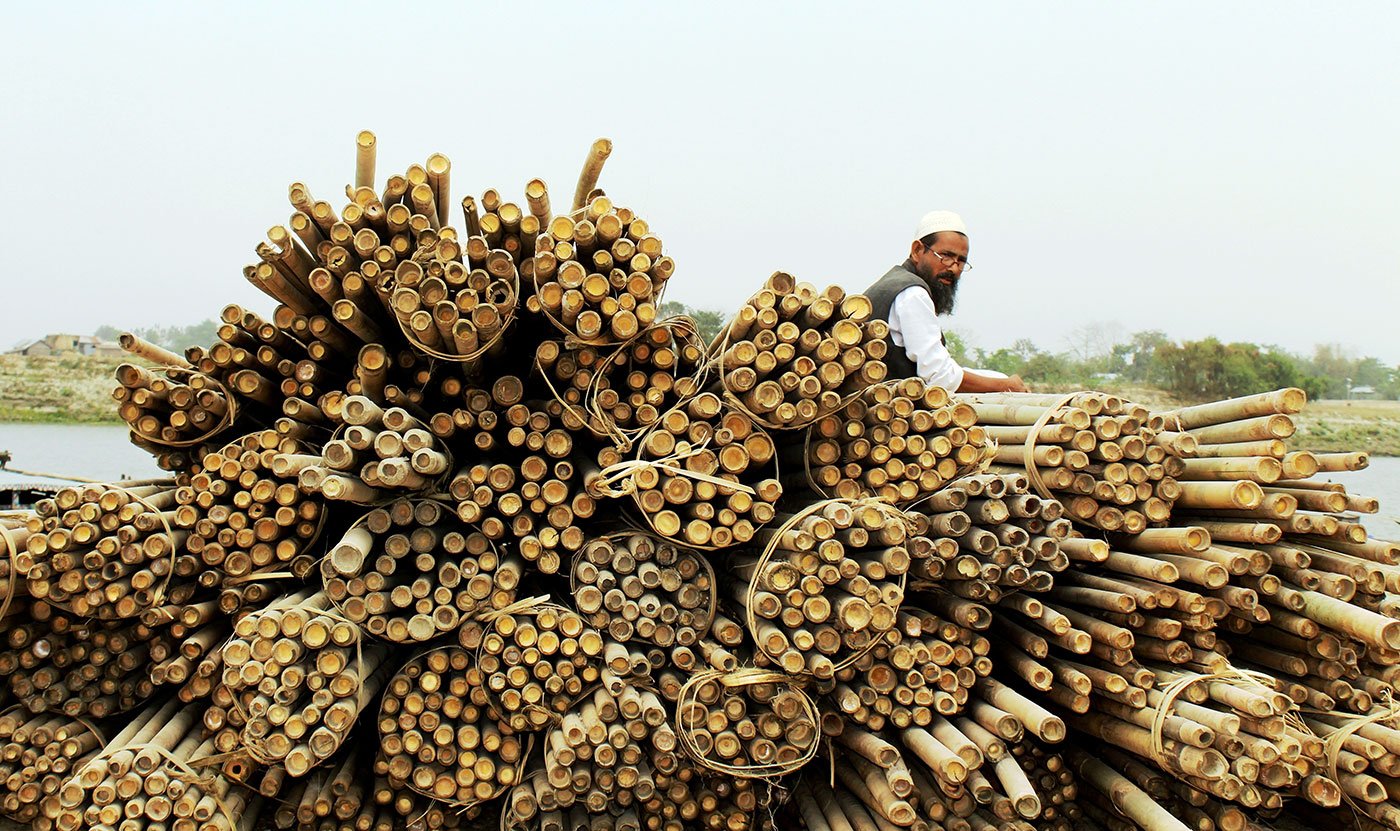 Mainuddin Pramanik of Kuntir island on the Brahmaputra in Assam comes to Dhubri town every day to work as a bamboo-splitter. But the trade is in decline and few other options are available to daily wage workers

Every morning, country boats from different chars – small islands prone to constant erosion and submergence – on the Brahmaputra river ferry daily wage earners to Dhubri town of Dhubri district in Assam. Bamboo logs tied as temporary rafts from the neighbouring state of Meghalaya also arrive here, floating down to the confluence of the Gadadhar tributary and the Brahmaputra in Dhubri.

But a livelihood crisis is brewing at this confluence. The demand for split bamboos has declined over the last two decades. These bamboos are used for making fences, panels, bamboo walls and wooden plyboard. But many living on the chars and elsewhere in Assam are shifting from traditional thatched and bamboo houses to innovative folding houses made of tin roofs and tin walls, to cope with the constant floods and erosion.  The demand for split bamboos has also declined in West Bengal and Bihar, where too alternatives such as brick or tin are increasingly used for building low-cost houses. 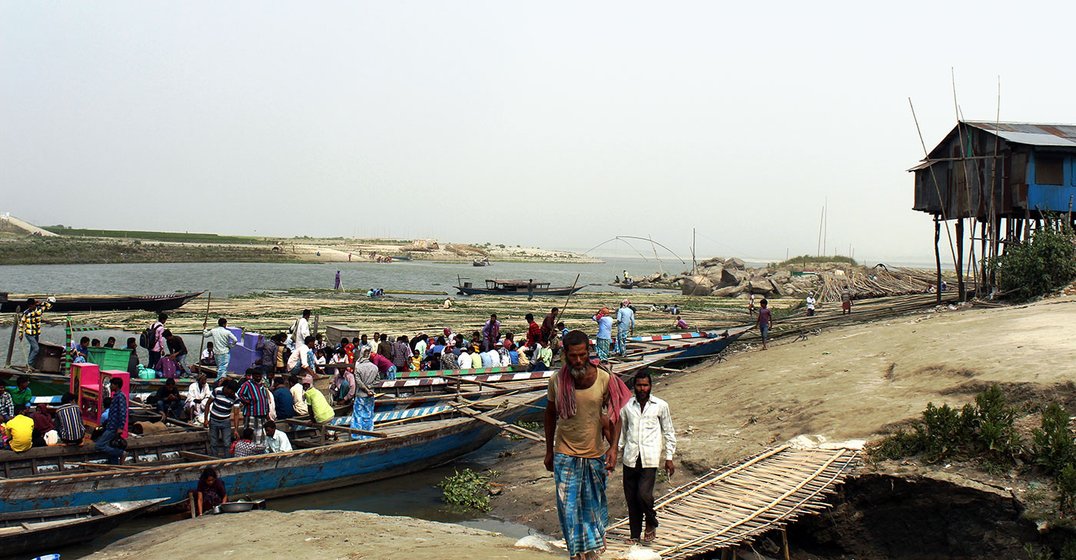 Mainuddin Pramanik, 35, comes to Dhubri every day from Kuntir char . He is a father of four, who earns an income by meticulously splitting the bamboos with a machete – a task locally called basher kaaj . He splits on average 20 bamboos over eight hours to earn Rs. 250 every day. Mainuddin is one of many such bamboo workers, who are brought here by local contractors. Not much work is available now, he says, hardly half-a-year of work days. 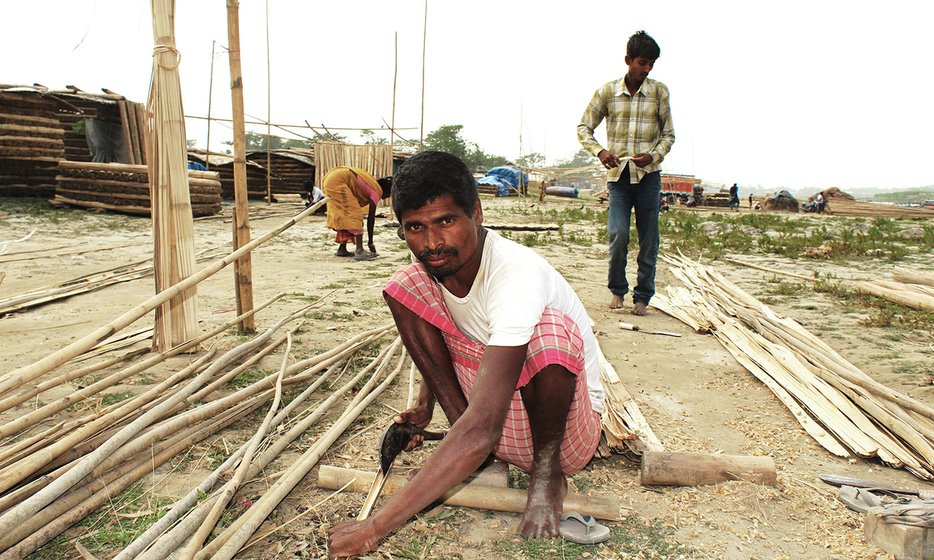 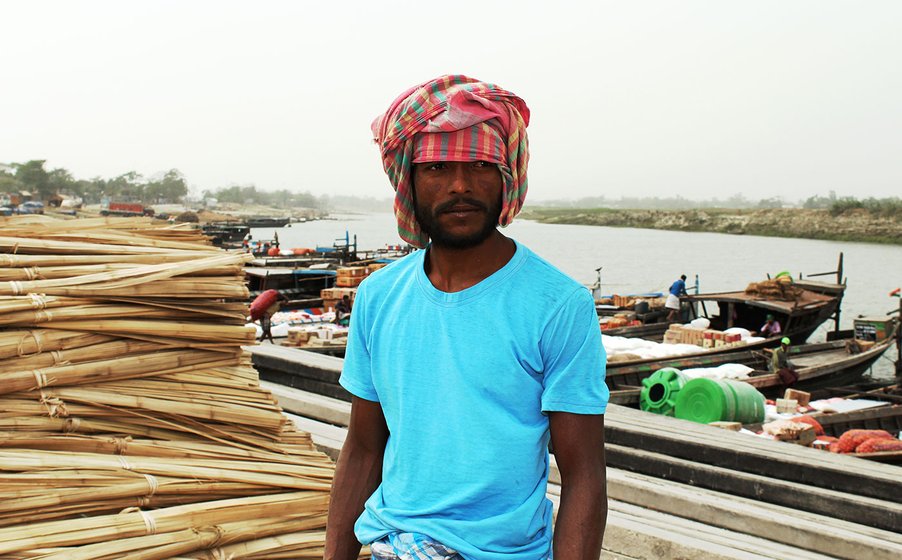 Mainuddin Pramanik (left) splits 20 bamboos for 8 hours to earn Rs. 250; Rejaul Karim (right) is also among the bamboo workers at the ferry docks in Dhubri 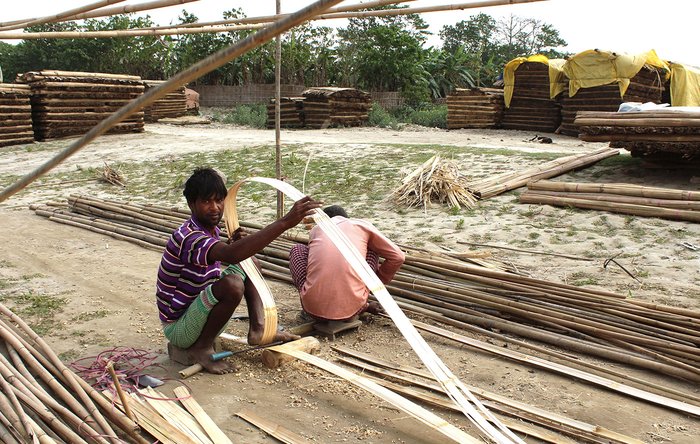 Splitting the bamboo with a machete: this work is available for only half the year

Each bamboo log is split into three parts – the top layer is very smooth and used in making bamboo walls; the middle layer is also used for walls, but it’s not so smooth; and the bottom layer is used as a filler in wooden plyboard.

From two trucks a month, business is down to one truckload in two months

The labourers tie the split bamboos with ropes and stack the bundles at the worksite, to be later loaded onto trucks and other vehicles for transportation. Split bamboos require large storage spaces. They weather fast, which depreciates their market value; the bamboo can then only be sold as fuel-wood at a low price. 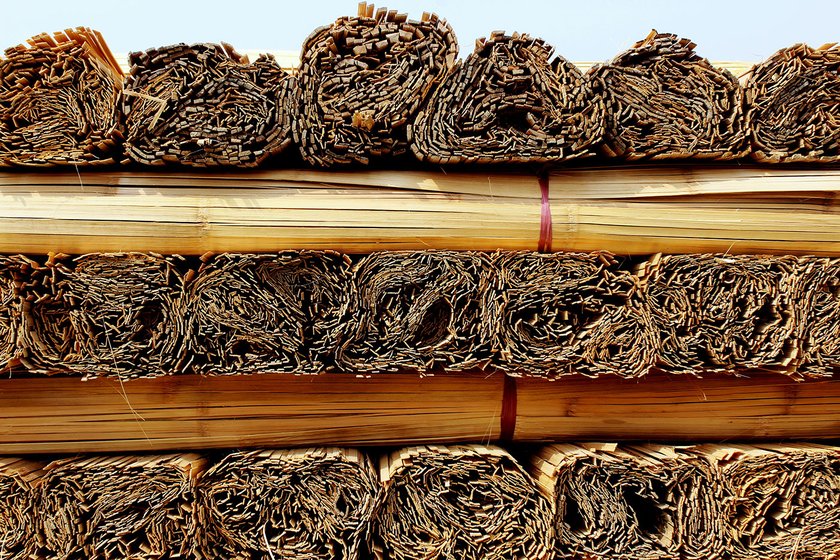 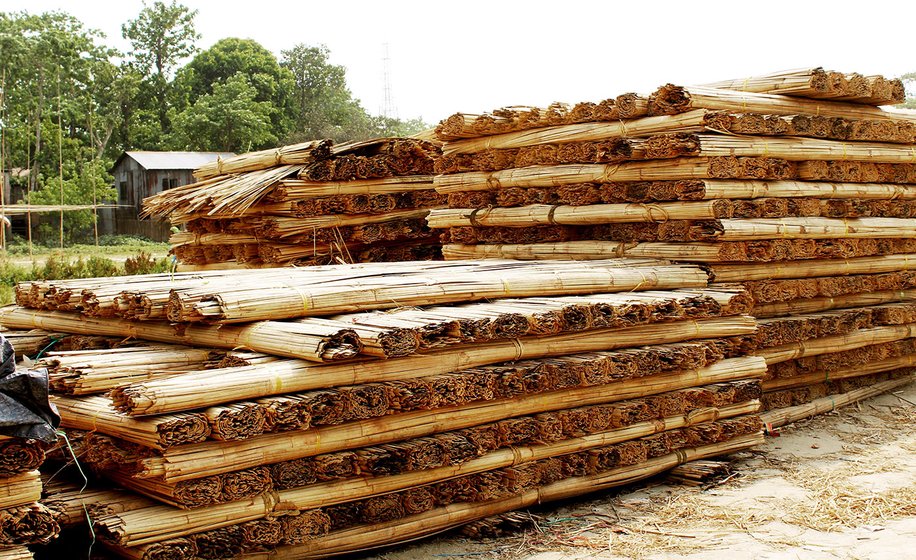 Storing the bamboo: a common sight on the ferry docks at the confluence in Dhubri 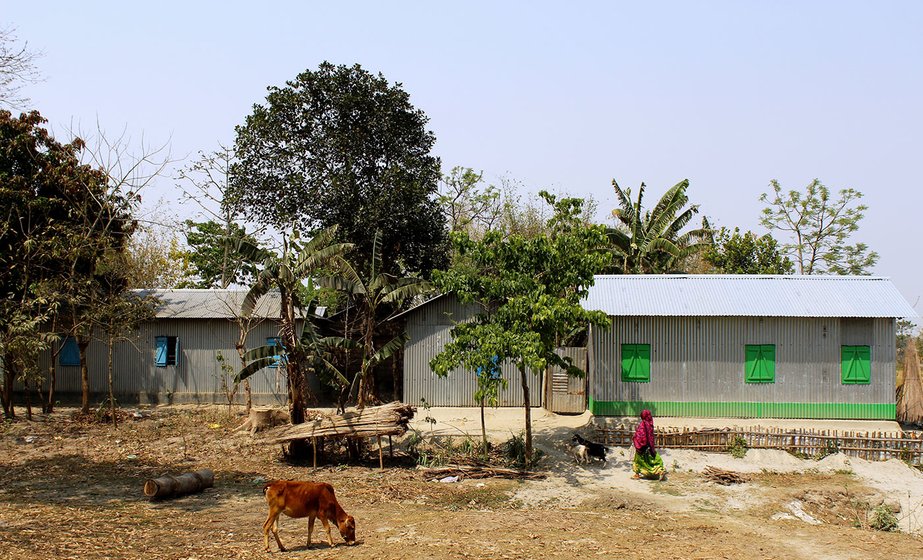 Tin is now the preferred building material on the chars

The steady demand for split bamboos on the chars has declined because people living on the shifting islands now prefer innovative folding houses of tin, which are more durable and can be shifted easily during the frequent floods or when the char erodes and forces them to move.

In the past, the forest department purchased large quantities of specially woven bamboo fences to protect plantations in the state. Now the department uses iron or plastic fencing nets.  This too has contributed to the declining demand for split bamboos. 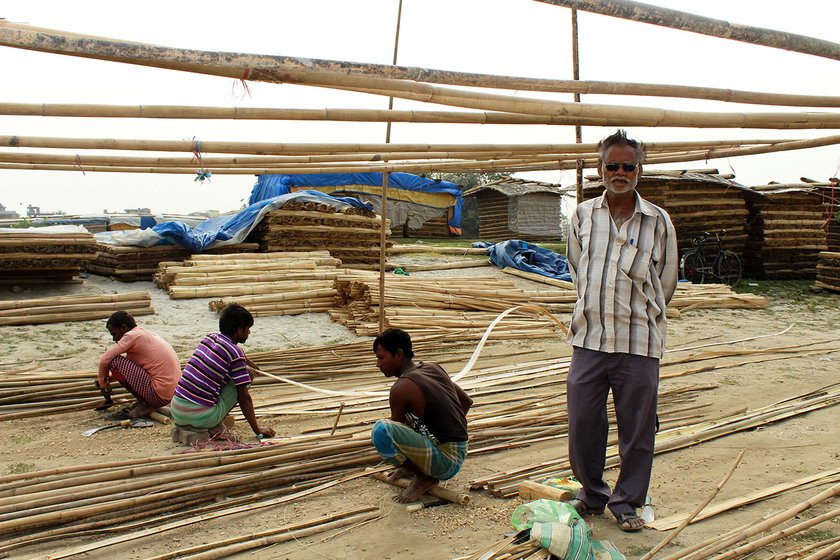 The contractor makes the payments on Tuesdays and Thursdays, the local market days. Mainuddin’s contractor, Radhakrishna Mandal (extreme right), purchases bamboos from Meghalaya for Rs. 10 per piece and engages Mainuddin and seven others to split them.

Until around four years ago, Mandal supplied at least two truckloads of split bamboos every month to states like West Bengal and Bihar. Now, he says, he supplies only one truckload in two months.

Four ferry ghats in Dhubri town connect over 350 chars – at all four, bamboo-splitting is a common activity and means of livelihood. At least seven contractors run their businesses at each ghat . 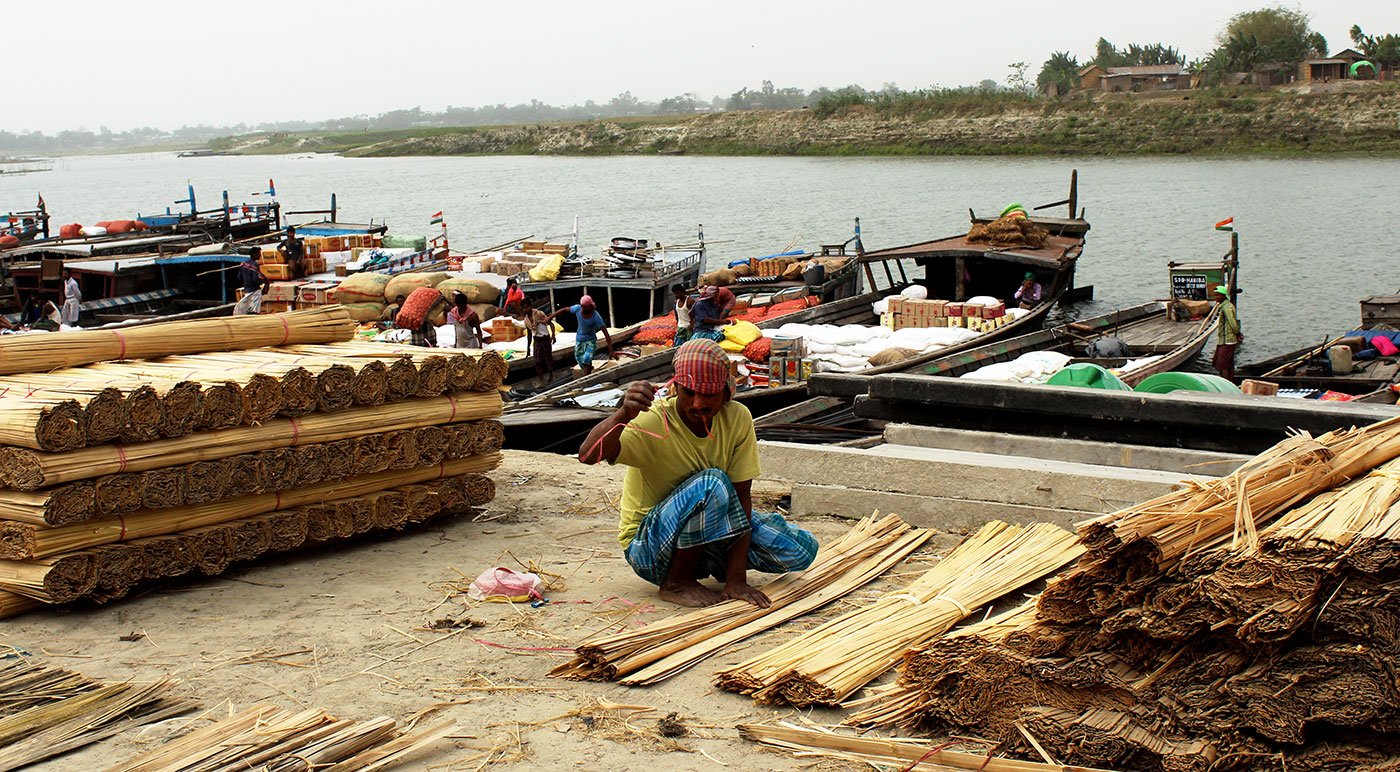 Dhubri is saturated with workers from the islands looking for daily wages, and Mainudding has few other options

Though the trade is stagnating, Mainuddin has no other work options. Most other daily-wage jobs – loaders, porters, rickshaw-pullers, garage helpers and others – at the confluence are saturated with labourers from the 350 chars seeking work.