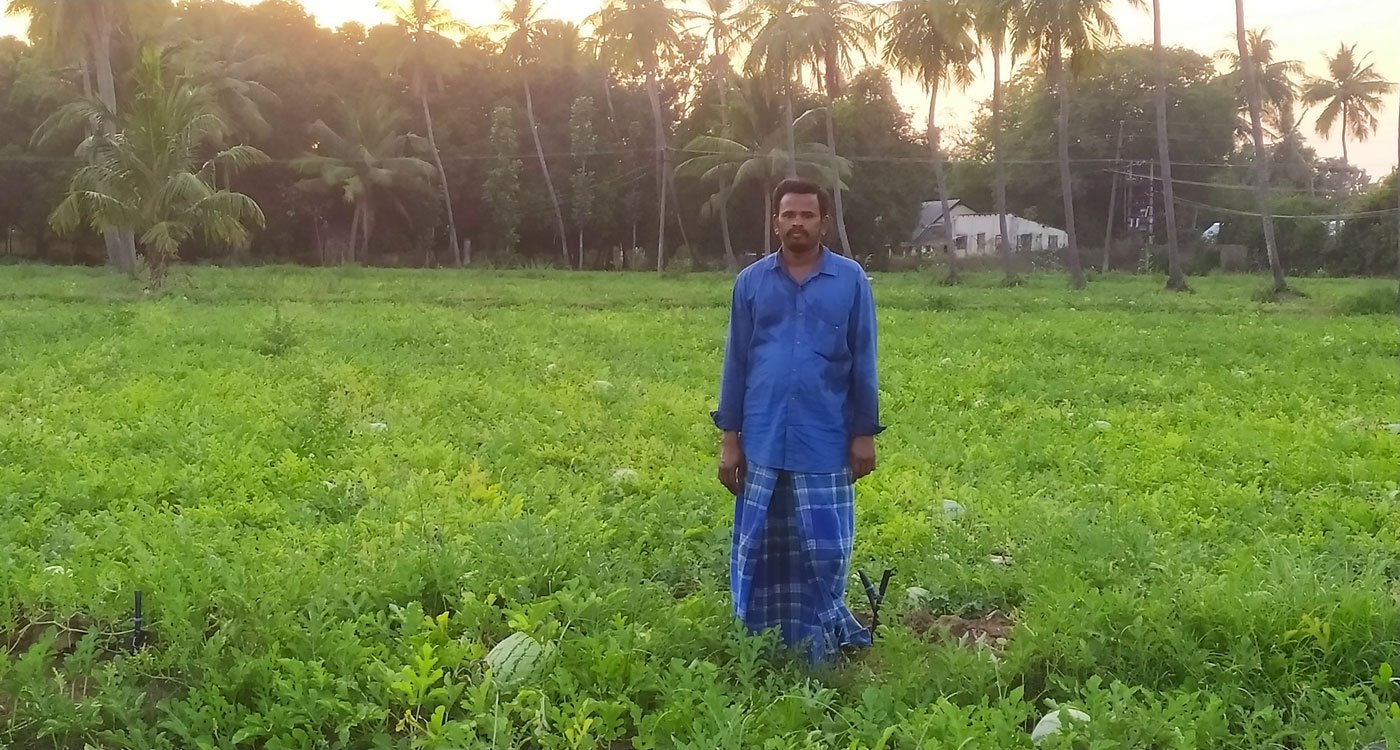 'Now the melons are on the verge of rotting'

The Covid-19 lockdown has left watermelon farmers in Tamil Nadu’s Chengalpattu district in a fix. With few buyers and transporters, many are being forced to let their fruit rot or accept terribly low prices

“In my 21 years as a farmer I have never faced a crisis like this,” says A. Suresh Kumar, a watermelon farmer in Chitharkadu village. Like several other farmers in this region, 40-year-old Kumar primarily grows paddy, but cultivates watermelon during the winter months on his five-acre farm as well as on the 18.5 acres leased from friends and family in his village of 1,859 people in Chithamur block of Chengalpattu district in Tamil Nadu.

“The melons are ready in 65 to 70 days. We were all prepared for harvesting and sending the fruits to various buyers in Tamil Nadu, Bengaluru and other parts of Karnataka when the lockdown was announced on March 25,” he says. “Now they are on the verge of rotting. We usually get Rs. 10,000 per ton from buyers, but this year no one has offered anything more than Rs. 2,000.”

In Tamil Nadu, the watermelon crop is planted only during the Tamil calendar months of Margazhi and Thai, which roughly correspond to the period from December to February. It grows better in this region during this season, and the crop is ready for harvesting just when the scorching southern summer begins. Tamil Nadu ranks eighth in all states producing watermelons – 162.74 thousand metric tons of the fruit is produced on 6.93 thousand hectares.

“I have planted in a way where different parts of my field will have ripe crops at two-week intervals. If you don’t harvest within a few days after they are ready, the fruit goes to waste,” adds Kumar (in the cover photo on top). “We weren’t told about any lockdown, so just when my first harvest was ready [in the last week of March], there were no buyers or truck drivers who were ready to transport the load.”

Kumar estimates there are at least 50 watermelon farmers in Chithamur block. Many are now forced to let their fruits rot or accept terribly low prices for their harvest.

Left: I n Kokkaranthangal village, w atermelons ready for harvest on M. Sekar's farm, which he leased by pawning off jewellery. Right: A. Suresh Kumar's fields in Chitharkadu village; t here were no buyers or truck drivers to move his first harvest in the  last week of March

This setback has come on top of the loans some of the farmers had taken. Among them is M. Sekar, 45, of Kokkaranthangal village, three kilometres from Chitharkadu. “I have pawned off jewellery that was kept aside for my three daughters to pay the lease for the farms as well as to cultivate the watermelons on four acres,” he says. “Now, when it is time for the harvest, there are no buyers. Unlike other crops, if we don’t load and send them within the next few days, my entire harvest is lost.”

Both Kumar and Sekar have borrowed at usurious rates from private moneylenders. And both estimate they have invested Rs. 6-7 lakhs each for this crop on their total acreage, which includes the cost of leasing the land, buying the seeds, tending to the crop as well as payments for farm labourers. While Sekar has been farming watermelon for three years, Kumar has cultivated the fruit for 19 years.

“I got into this because the profits will be helpful for my daughters’ education and future," Sekar says. "But now I don’t even have their jewellery left. Usually, we are left with about Rs. 2 lakhs in profits after all costs. This year, we will get only a fraction of our investment back and we can forget about any profits.”

M. Murugavel, 41, another watermelon farmer in Kokkaranthangal village, says, “The only reason I’m agreeing to such bad offers is because I don’t want such good fruits to just rot away. This has already put me at a great loss.” Murugavel has taken 10 acres of land on lease to cultivate watermelons. He adds, “I don’t know what to do if this situation continues. There are other farmers in my village who have invested equal amounts and have left their entire fields to rot because no buyer is able to purchase the fruits now.” 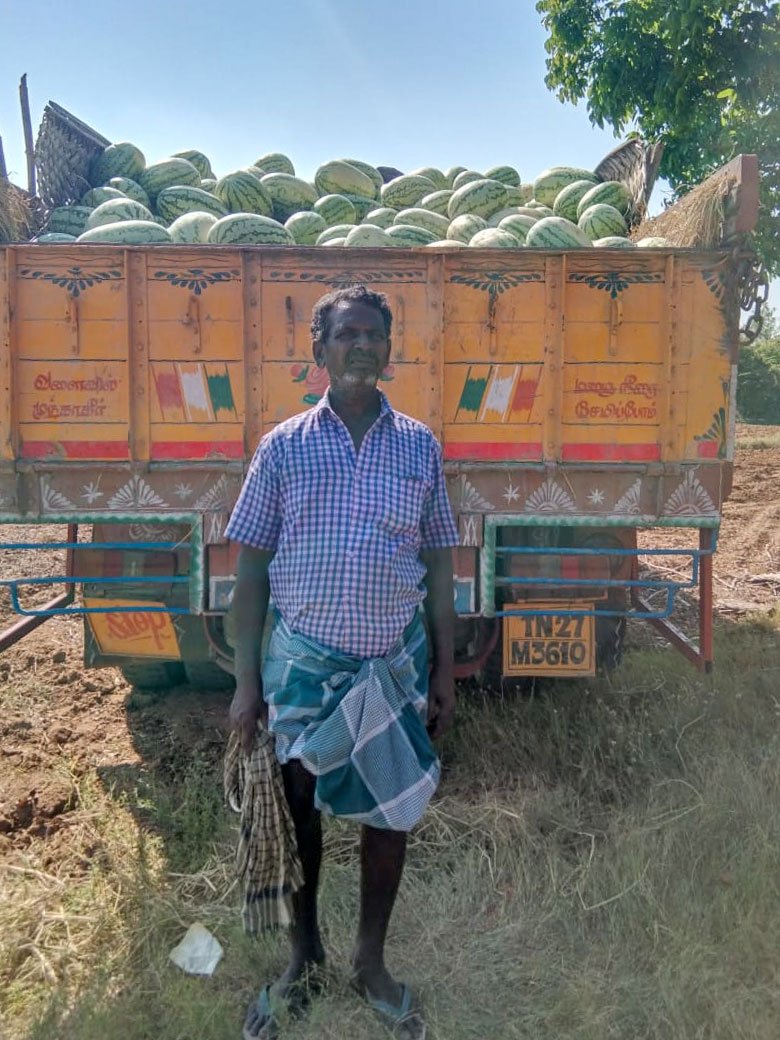 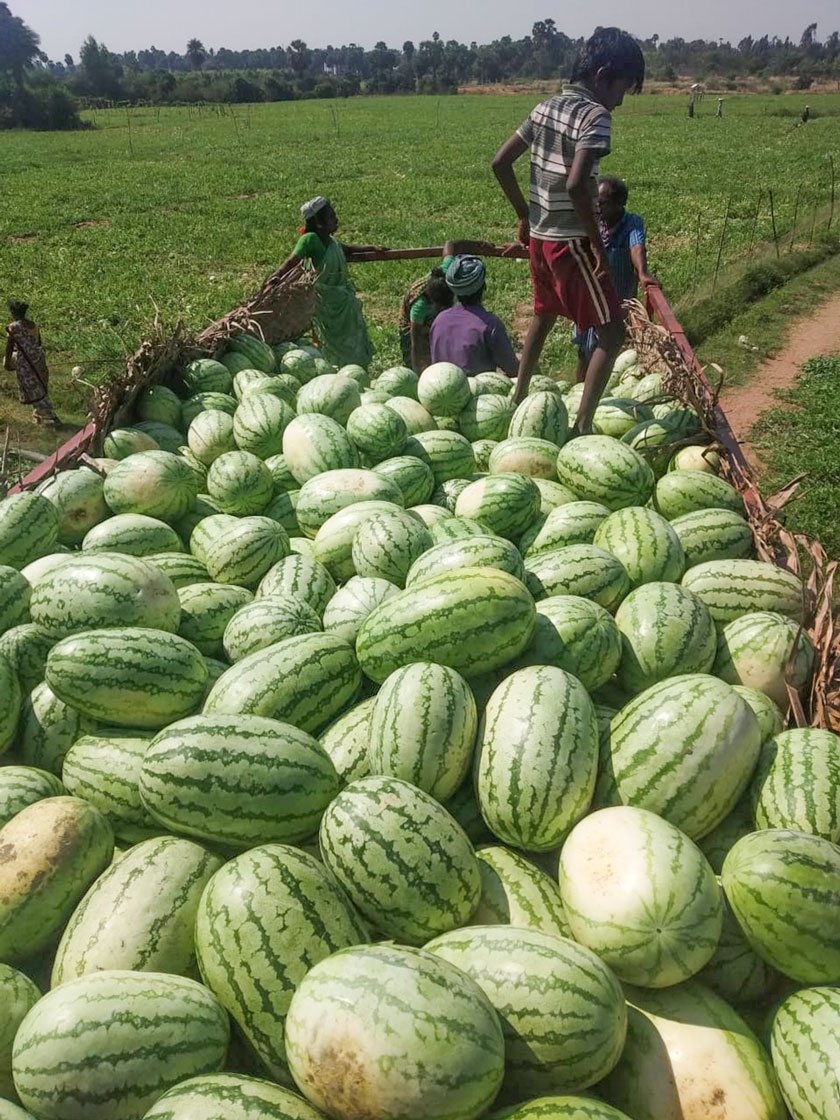 A farmer near Trichy with his watermelons loaded onto a truck. A few trucks are picking up the fruits now, but farmers are getting extemely low prices

“We really empathise with the farmers. I agree that in the first couple of days of the lockdown, transportation was hard. We acted on it immediately and now we’re making sure the fruits are being taken to all markets in the state and when possible, to neighbouring states,” says Gagandeep Singh Bedi, agricultural production commissioner and principal secretary, Department of Agriculture (Tamil Nadu).

According to data provided by Bedi, 978 metric tons of watermelon have been transported from Chithamur block from March 27 to April 2 to various markets in Tamil Nadu. He adds, “I don’t know what the reason is but the sale of watermelon itself has taken a drastic hit during this crisis, so that is a big problem. But we are doing our best to help.”

Will the state provide compensation to the farmers for the huge losses they are sure to incur? “As of now we are focussing on arranging transport for the harvests,” Bedi replies. “Compensation will have to be looked into later since it is a political decision. We will do our best to help the farmers recover from this crisis.”

The farmers of Chithamur acknowledge that trucks are coming to collect their harvests, though in fewer numbers. “Even if they take some of the fruits, the rest are left to rot,” says Suresh Kumar. “And for those that are taken, we get a pittance as payment. While people in cities are falling ill because of corona, we are losing our income because of it.”

Sibi Arasu is an independent journalist based in Bengaluru. @sibi123

Other stories by Sibi Arasu