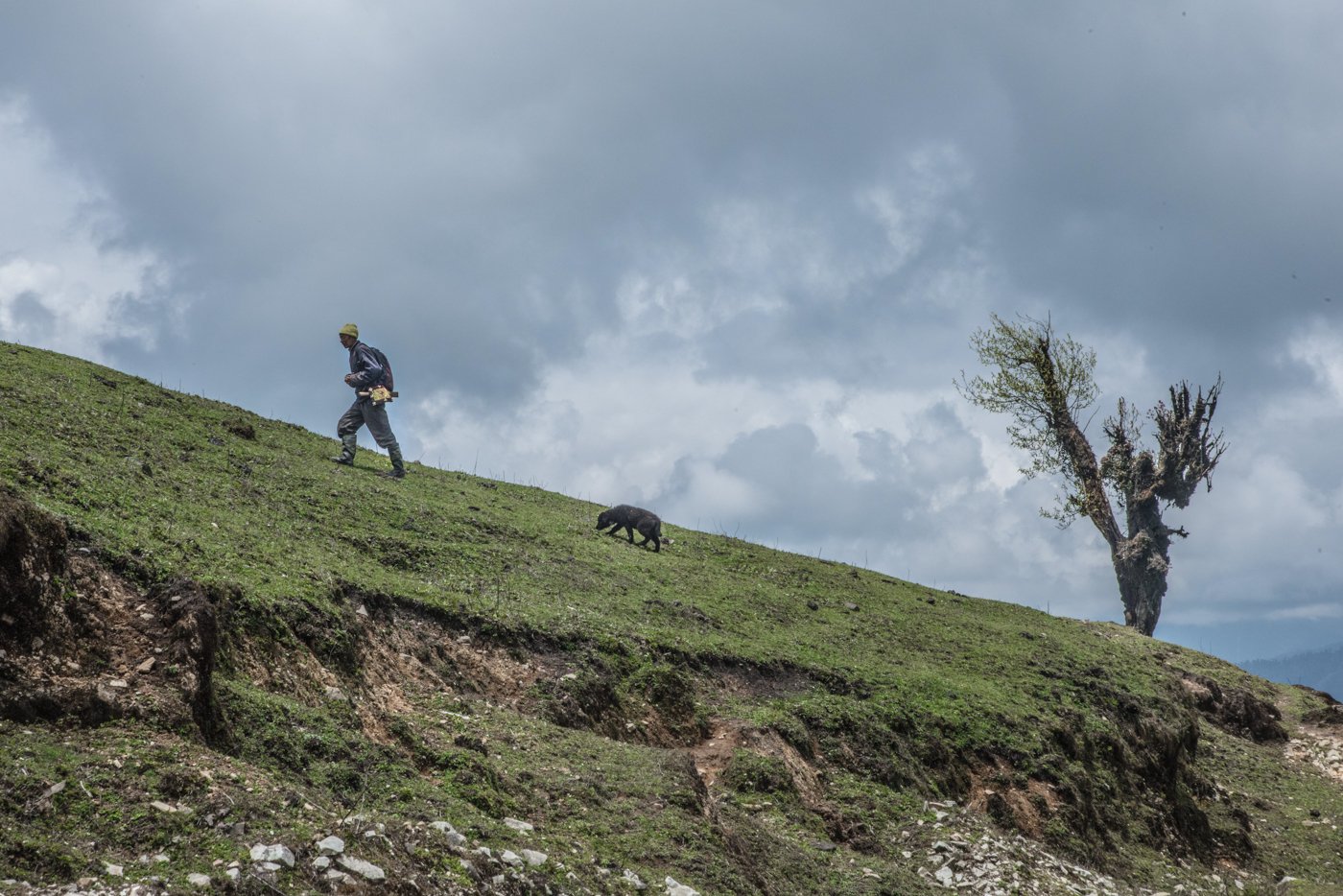 In the high mountains of the eastern Himalayas in Arunachal Pradesh, the nomadic Brokpa community is recognising climate change and devising coping strategies based on traditional knowledge

This story is part of the PARI series on climate change that won the Ramnath Goenka Award for 2019 in the Environment Reporting category.

“Dzomo are very popular among us now,” says Pempa Tsuring, 35, a nomadic herder from Lagam village in West Kameng district.

Dzomo? What’s that? And what makes them popular here at 9,000 feet and above in the mountains of Arunachal Pradesh?

The dzomo are a hybrid of yak and kot , a type of highland cattle. The male hybrid, called dzo, is sterile, so the herders prefer the female, the dzomo . While this is not a new breed, the Brokpa, a semi-nomadic pastoral community, have been adding more of these animals to their herds in recent times – to adapt to the changing climate in the eastern Himalayas.

Pempa, whose herd of 45 animals includes both yaks and dzomos , says these yak-cattle hybrids “are more heat-resistant and can adapt better to lower altitudes and rising temperatures.”

In these high-altitude grazing grounds, heat or ‘warming’ are both very real and relative. Here there are no 32 degree Celsius days in the year. But yak, which can withstand minus-35 degrees with ease, struggle if the temperature rises beyond 12 or 13 degrees. Indeed, the entire ecosystem struggles when these changes occur – as they have in recent years in these mountains.

The Brokpa, the nomadic herders within the larger Monpa tribe (of around 60,000 in Arunachal notes Census 2011), have for centuries reared yak and tend them at mountainous grazing grounds. During the harsh winters, they live in the lower regions, and in summer they migrate to higher altitudes – moving between 9,000 and 15,000 feet.

But like the Changpa in the Changthang region of Ladakh, the Brokpa too have been severely hit by an ever-more erratic climate. For centuries, their livelihoods, their very societies, have been based on rearing and herding yak, cattle, goat, and sheep. Of these, they depend the most on the yak – at economic, social, and even spiritual levels. That bond is now severely undermined.

“The yak start feeling exhausted as early as late February because of the heat,” Leki Suzuk, a herder in Chandar (locally also spelt Chander) village, told me. I stayed with her family during my visit in May to Dirang block of West Kameng. “The summer is prolonged in the past several years, the temperature has risen. The yak have weakened,” adds Leki, who is in her late 40s. 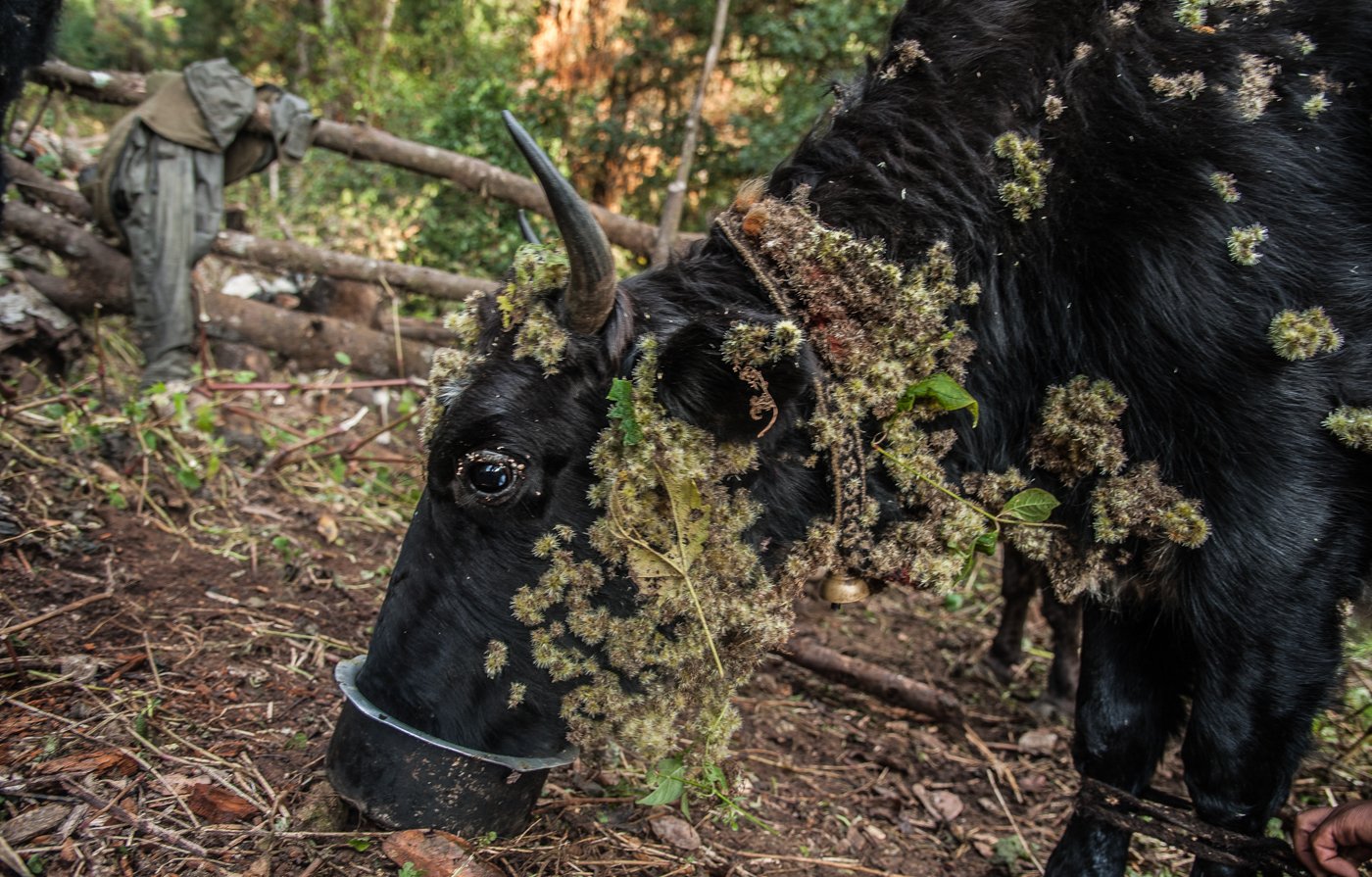 The dzomo are a hybrid of the yak and kot , a type of highland cattle. The Brokpa, a nomadic pastoral community, have been adding more of these animals to their herds to adapt to the changing climate in the eastern Himalayas

Along with the temperatures, the Brokpa say, the entire weather pattern has become increasingly unpredictable in the past two decades in the mountains of Arunachal Pradesh, which border the Tibet Autonomous Region of China, Bhutan and Myanmar.

“Everything is delayed,” says Pema Wange. “The arrival of summer is delayed. The arrival of snowfall is delayed. The seasonal migrations are delayed. The Brokpa go to their higher grazing locations to find them still covered in snow. That means even the melting of the snows is delayed.” Pema, in his late 30s, is not a Brokpa, but a conservationist from Thembang village who belongs to the Monpa tribe and works for the World Wildlife Fund.

This time, I’m speaking to him on the phone, since much of the region which I normally traverse there has become inaccessible after heavy rains. But I was there in May this year, standing on a cliff with Naguli Tsopa, a Brokpa yak herder from Chandar village, looking down at the rich forests of West Kameng district. Most of his community is concentrated here and in Tawang district.

“It’s a long journey from here to Mago, our summer grazing ground,” said Naguli, who is in his late 40s. “We have to walk through the jungles for 3-4 nights to reach there. Previously [10-15 years ago], we used to leave [for the upward migration] by May or June. But now we must start earlier, by February or March and return later, by up to 2-3 months.”

Naguli, who I accompanied on one of his long journeys into heavily misted woods to collect the best quality of bamboo that grows in these parts, pointed to more problems: “Because of the extended summers,” he said, “some of the local medicinal herbs we use to treat the yaks – they don’t seem to grow any more. How do we tend to their ailments?”

Arunachal is normally a rainfall-rich state, which averages over 3,000 millimetres of rain annually. But it has suffered rainfall deficits for several years in the past decade, with the shortfall ranging, suggests India Meteorological Department data, between 25 and 30 per cent in at least four of those years. Though in July this year, the state saw torrential downpours washing away or sinking quite a few roads.

Amid these fluctuations, the constant in the mountains is rising temperatures. 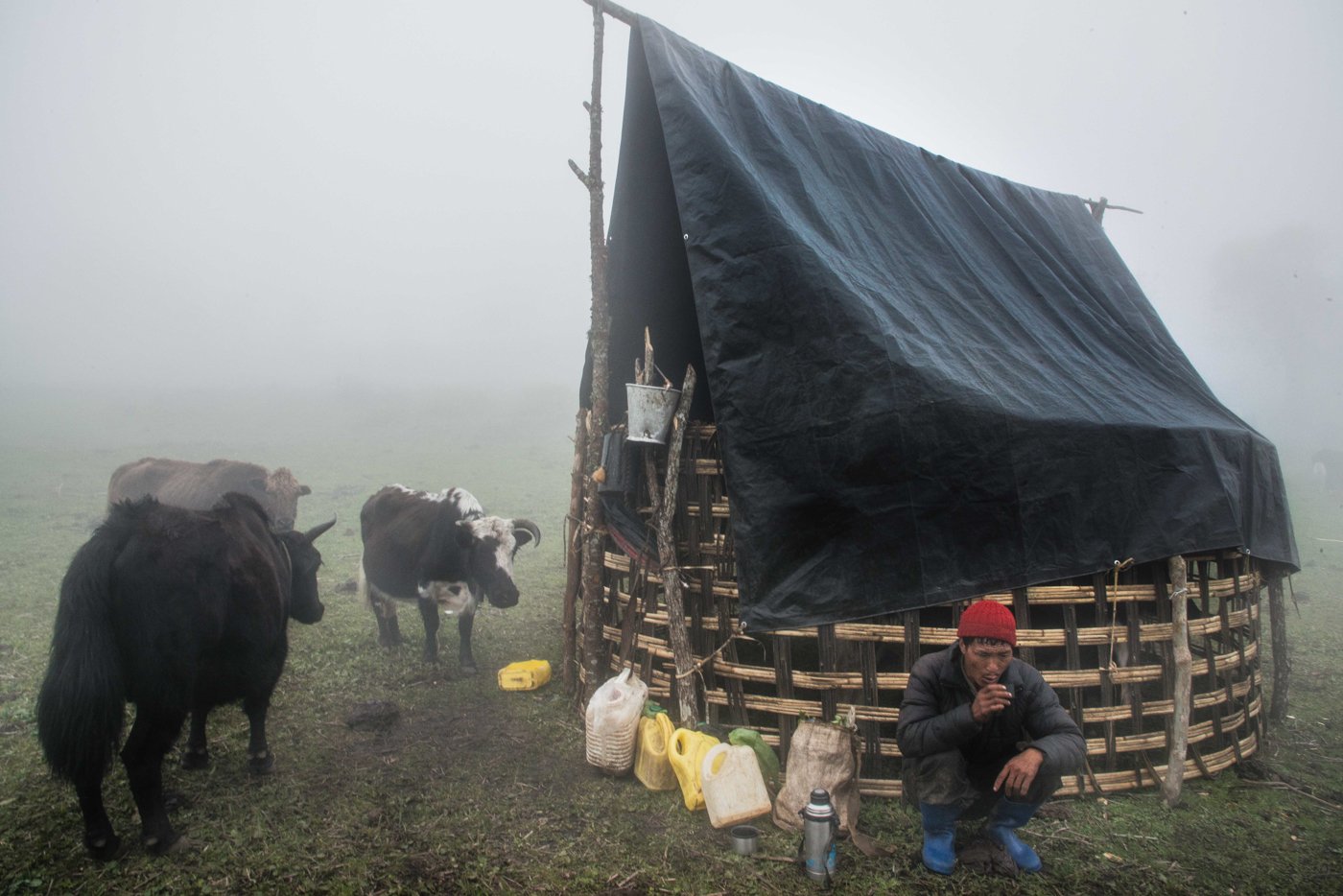 Naguli Tsopa, taking a tea break while grazing his animals at the high-altitude grasslands of West Kameng district, says, ‘Because of the extended summers, some of the local medicinal herbs we use to treat the yaks don’t seem to grow any more. How do we tend to their ailments?’

In 2014, a study by the University of Wisconsin-Madison, recorded changes in temperatures in the eastern Tibetan Plateau (the larger geographical zone in which Arunachal is located). Daily low temperatures had “increased greatly over the last 24 years” (between 1984 and 2008). Daily high temperatures had increased at a rate of 5 degrees Celsius in 100 years.

“We are trying to deal with the issues of erratic weather,” says Tsering Dondup, another herder, in his early 30s, who we ran into. “We have extended our migration time by two or three months. We are using pasture more scientifically [through more patterned rather than random grazing].”

Like him, the majority of the Brokpa are aware of climate change. They don’t speak much of why this might be happening, but understand the damage it is doing. And here’s something encouraging: they’re figuring out various adaptation strategies, say several researchers. One group that surveyed the community pointed to this in 2014 in the Indian Journal of Traditional Knowledge . Their research concluded that 78.3 per cent of Brokpas in West Kameng and 85 per cent of those in Tawang – that’s 81.6 per cent of this nomadic community in Arunachal – “were aware [of]…the changing climatic scenario.” And of these, over 75 per cent “stated that they have adopted at least one adaptation strategy to cope up with climate change.”

The researchers note other strategies too – ‘herd-diversification’, migration to higher altitudes, changes in the migrations calendar. Their paper speaks of “10 coping mechanisms” to counter “the negative impacts of climate change.” The other strategies include changes in pasture use, rejuvenation of degraded high-altitude grazing grounds, revised herding practices, and cattle-yak hybridisation. Also, supplementing feed with other items where grass is scarce, adopting new livestock healthcare methods, and seeking additional sources of income such as road construction labour, small businesses, and fruit collection.

There is no way to know if any or all these will work and not be overwhelmed by larger processes. But they’re doing something – and have to. The herders tell me the average family has lost 20-30 per cent of its annual income from the decline of the yak economy. A fall in milk yields also means a drop in the amount of homemade ghee and chhurpi (cheese from fermented yak milk). The dzomo may be sturdier but do not necessarily match the yak in milk and cheese quality, or even in religious importance.

“As the yak herds are shrinking or suffering degradation, so too the incomes of the Brokpa are dwindling,” Pema Wange said during that May trip. “Now [commercially processed] packaged cheese is easily available in the local market. So chhurpi sales are falling. The Brokpa are hurt both ways.”

Shortly before I left for home that time, I ran into 11-year-old Norbu Thupten. He was with his herd in the isolated hamlet of Thumri along the Brokpa migration route. “My grandfather’s time was the best,” he asserted confidently. And added, perhaps reflecting the talk of his elders: “More pasture and fewer people. The elders say we had neither border restrictions nor climate difficulties. But the happy days are now just nostalgia.” 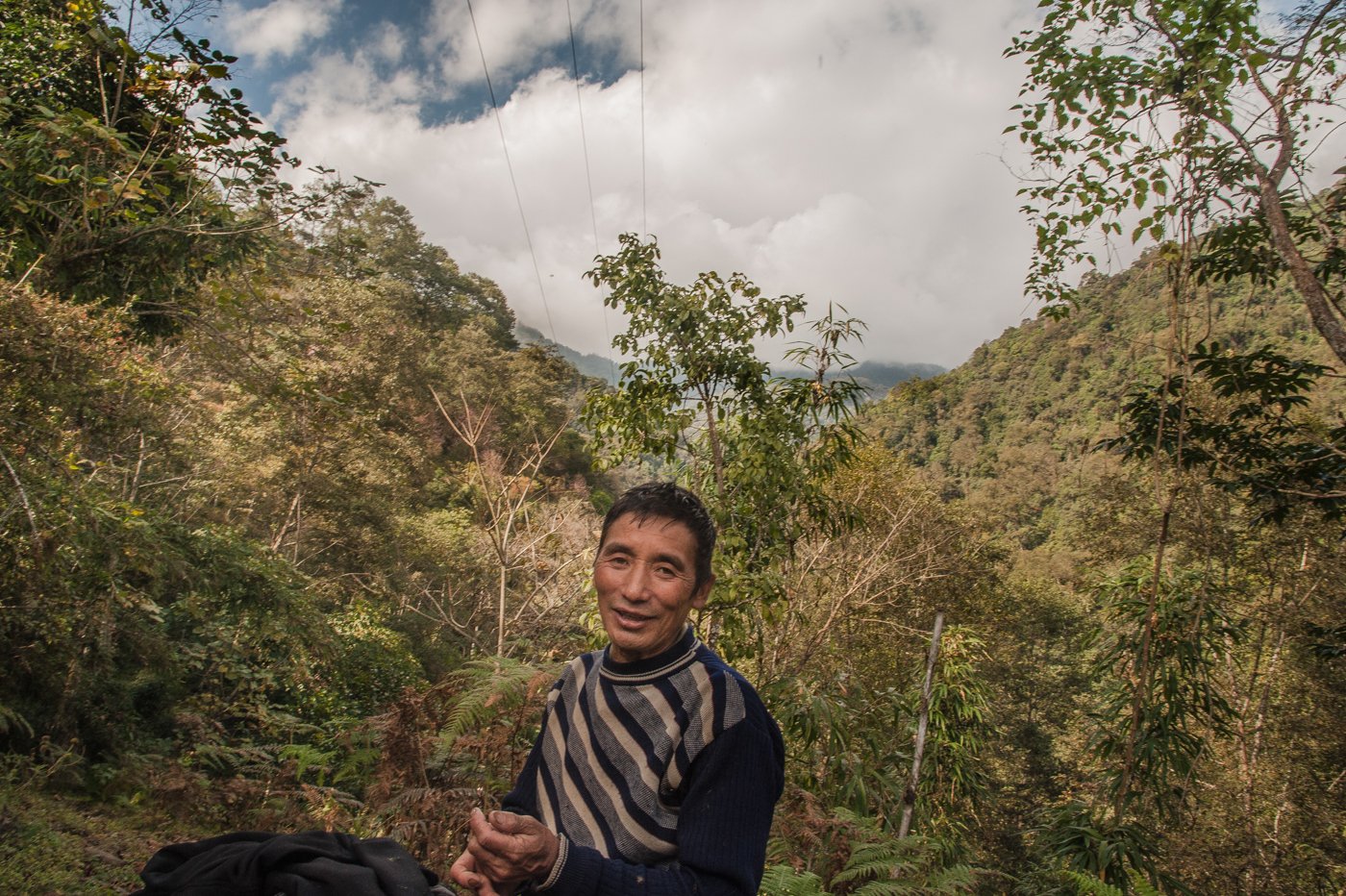 The Brokpa of West Kameng and Tawang districts in Arunachal Pradesh , a community of reclusive herders of the Monpa tribe , live in the mountains at altitudes ranging from 9,000 to 15,000 feet . They say their migration patterns are changing with the increasingly unpredictable weather patterns 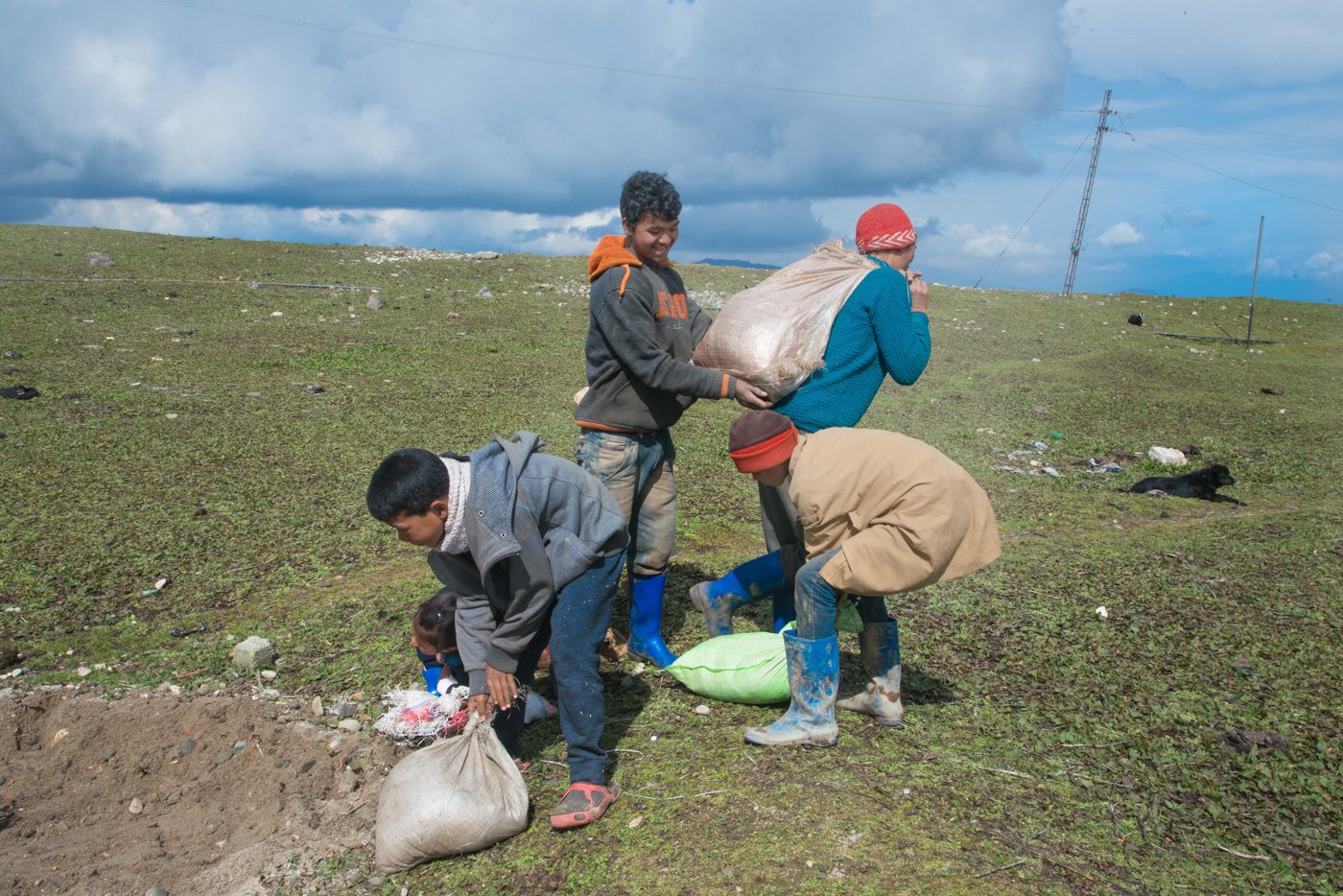 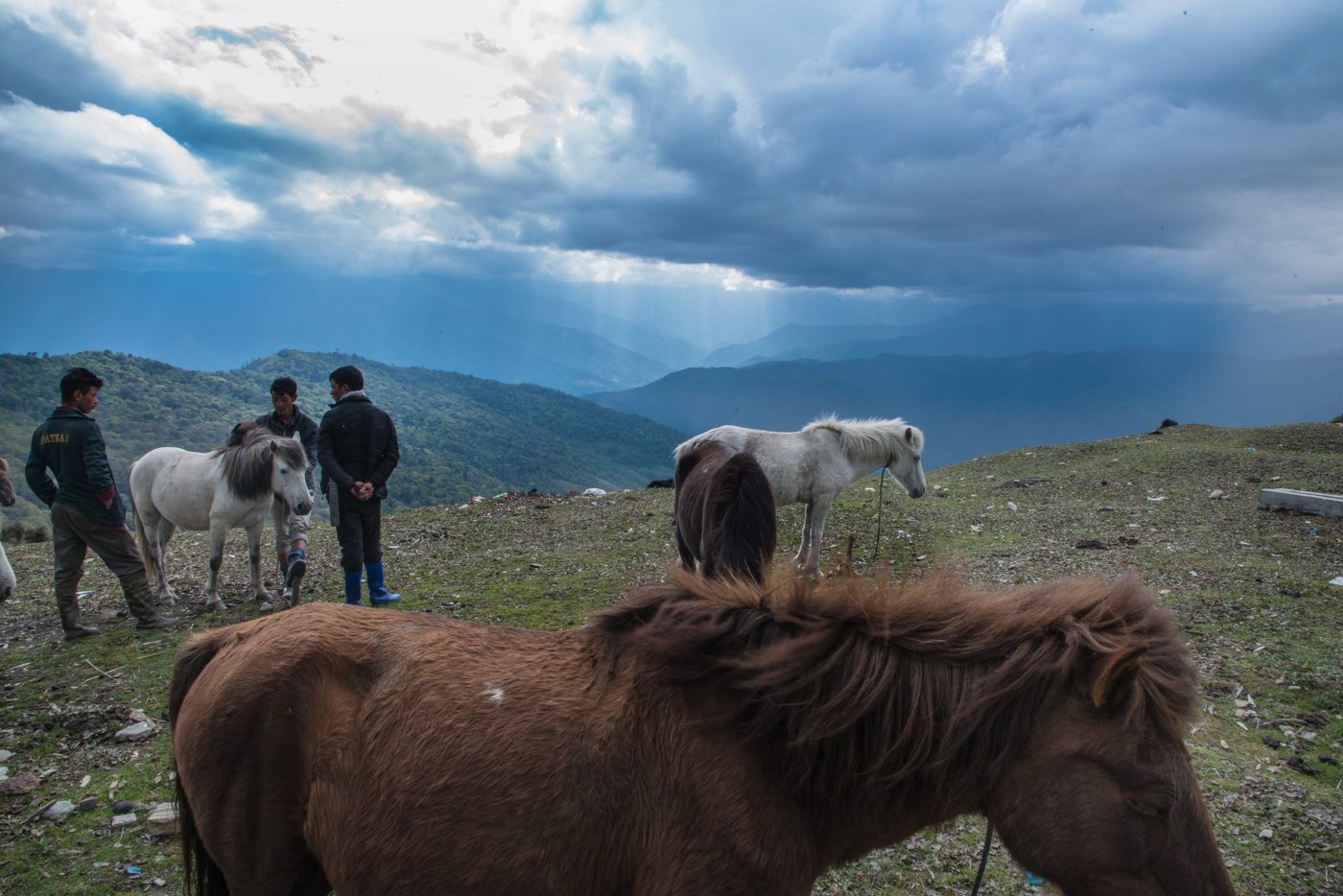 Outside Chandar village, a group of Brokpa herders talks about the migration route. Because the snow at higher altitudes clears late, they now often have to change their route or wait along the way with their herds 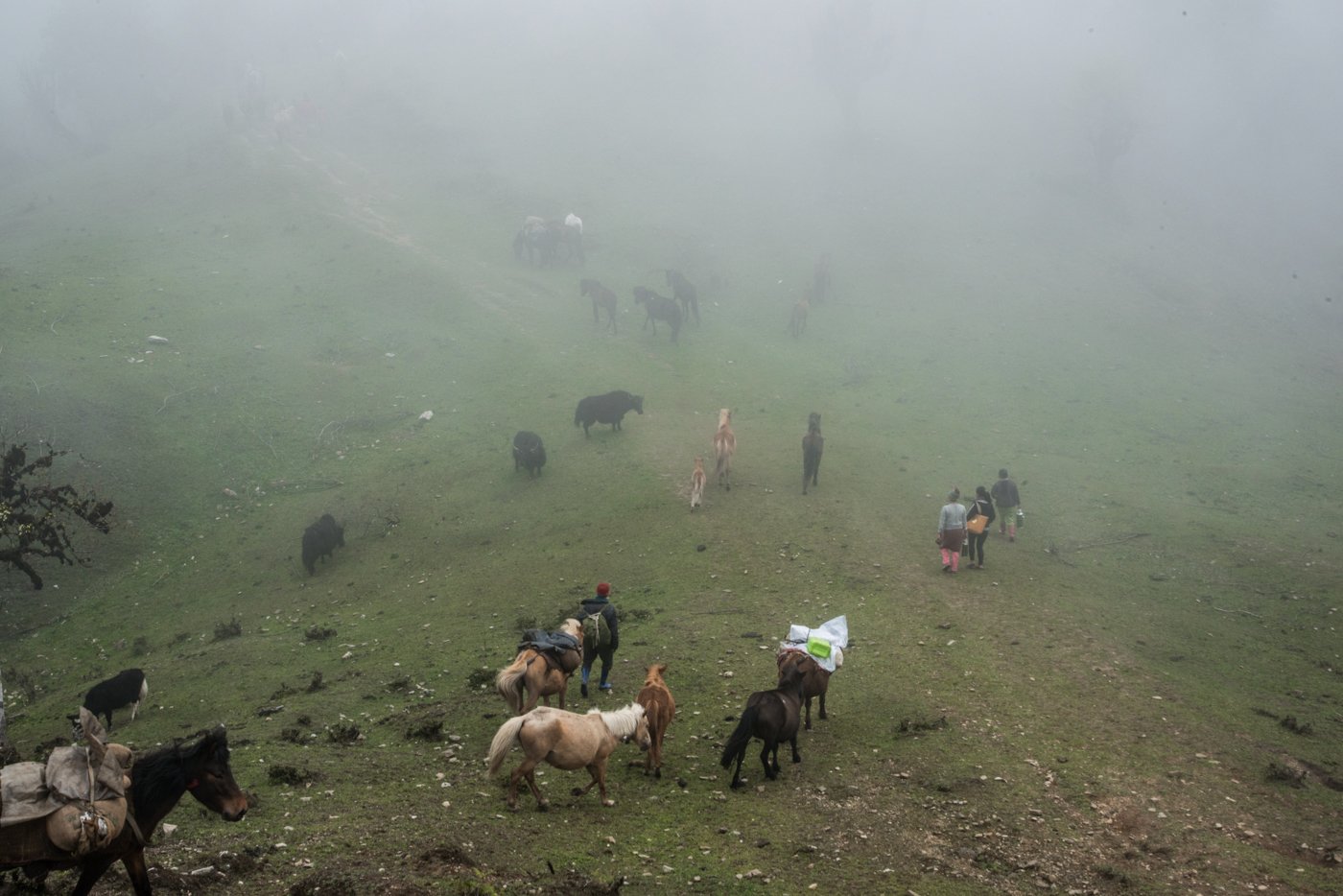 A group of Brokpa herders going to the grazing ground at Mago, along a route that crosses three high-altitude passes: ‘Previously, we used to leave by May or June. But now we must start earlier, by February or March and return later, by up to 2-3 months’ 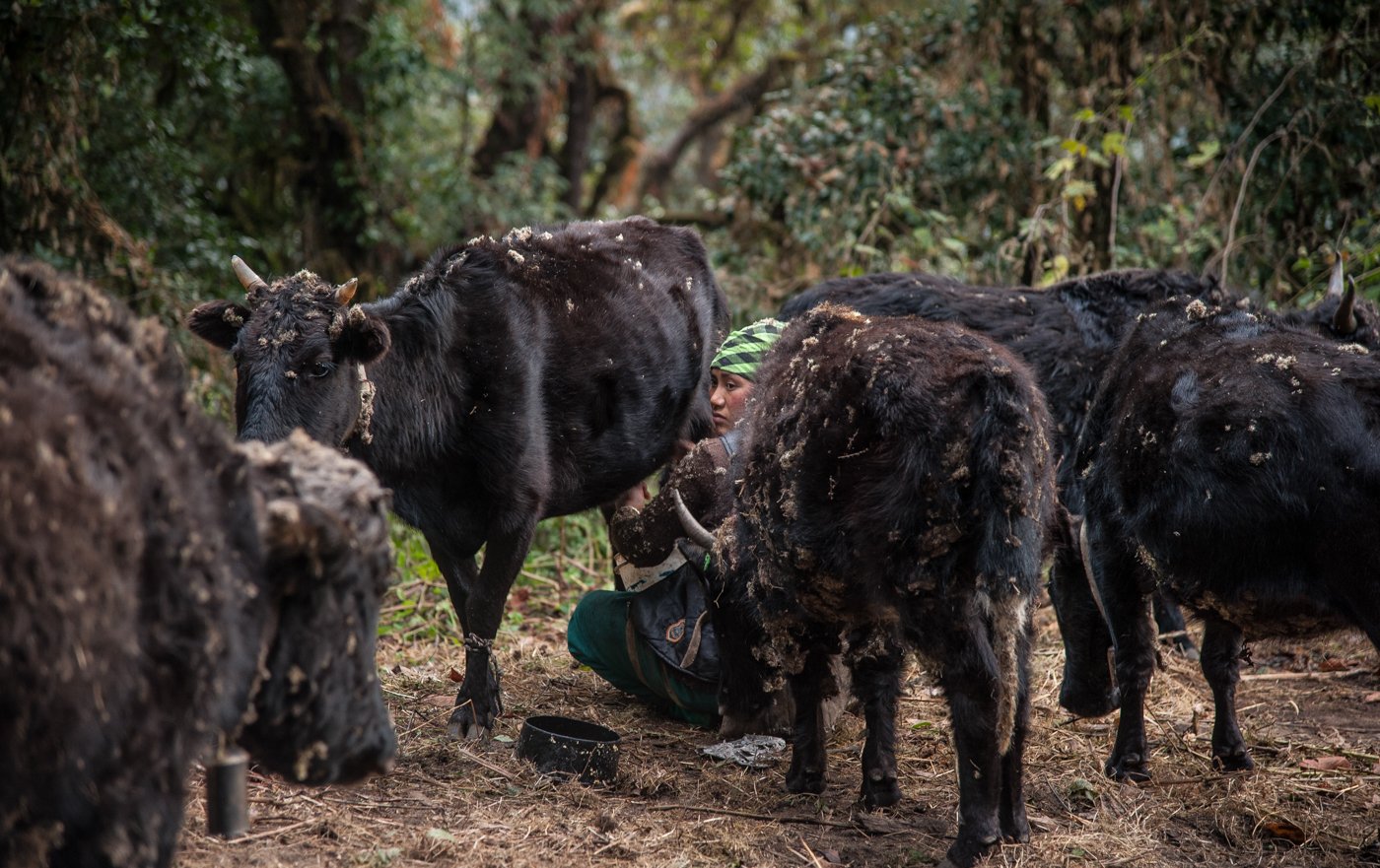 Tashi Tsering milking dzomo in the forests near Lagam village. The dzomo may be more heat-resistant and can adapt better to lower altitudes, but don’t necessarily match yaks in milk and cheese quality, or even in religious importance; they are smaller too, and more disease-prone, and this is impacting the Brokpa economy 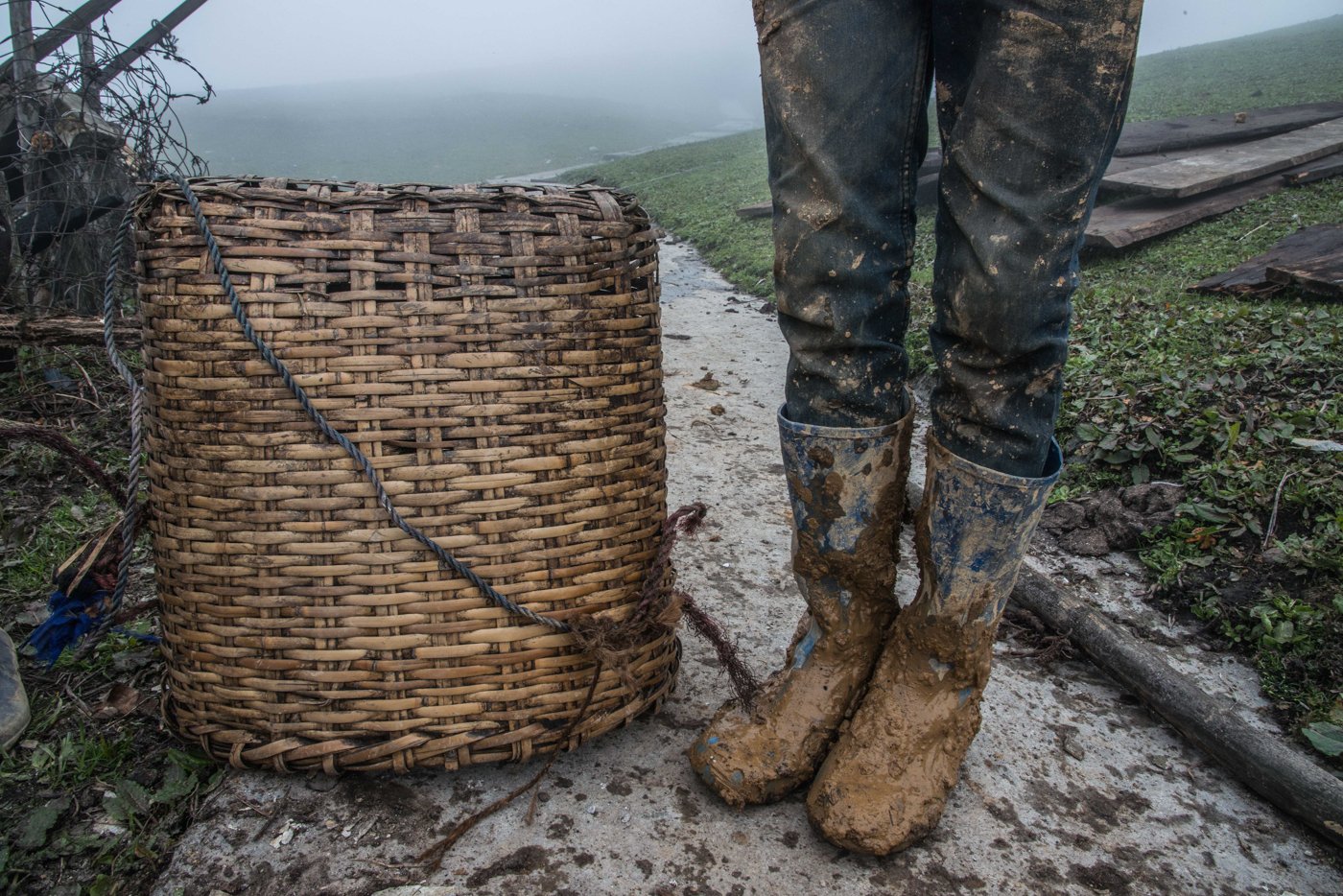 Back from collecting fruits in the jungle: To cope with the changes, Brokpa herders are turning to other sources of income such as road construction labour, small businesses, and fruit collection – which involves many hours ofwalking on muddy roads 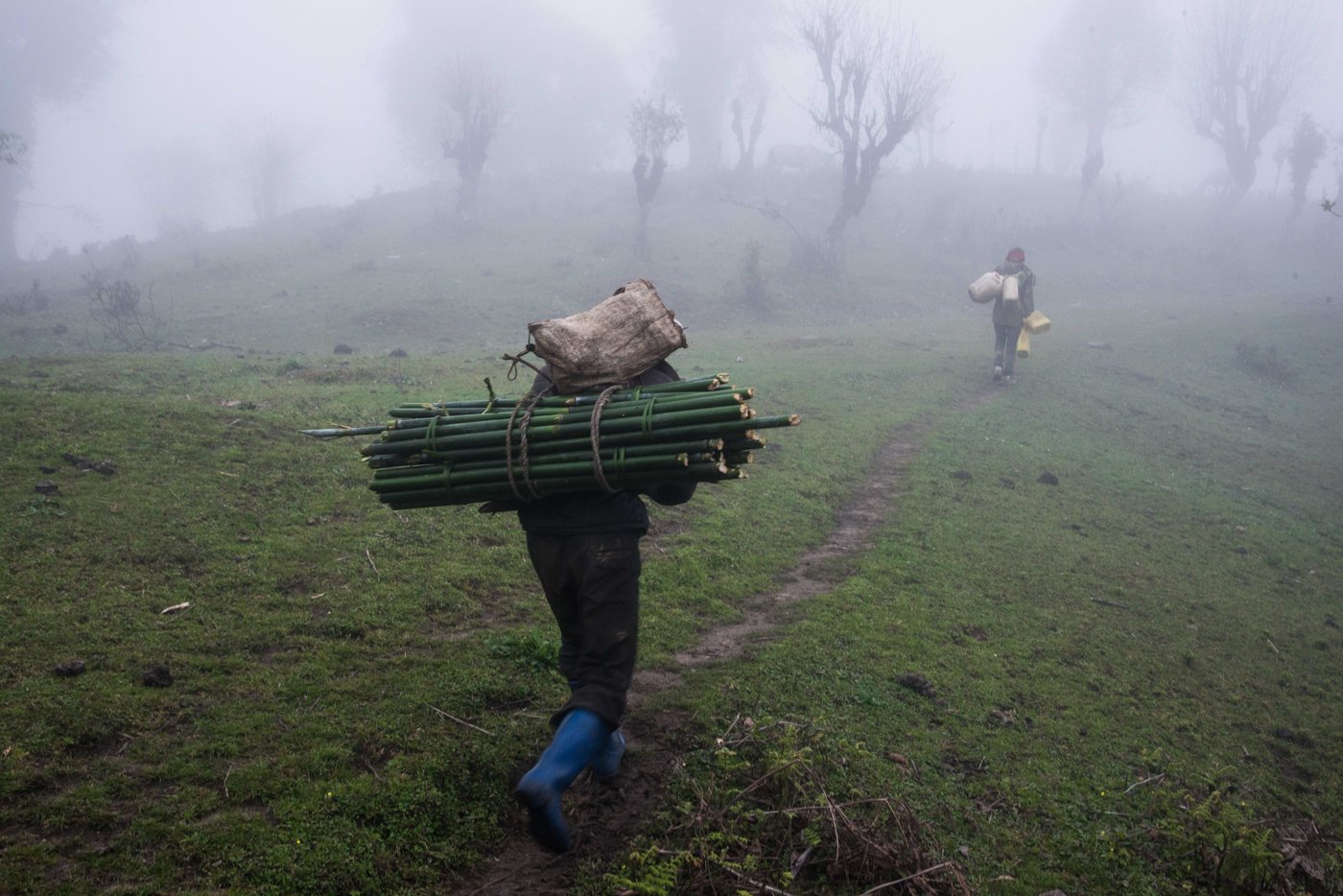 Returning after collecting bamboos from the jungle: Bamboos are central to the Brokpa’s daily life, and are used to build makeshift kitchens and household items. But these rhythms are all slowly changing 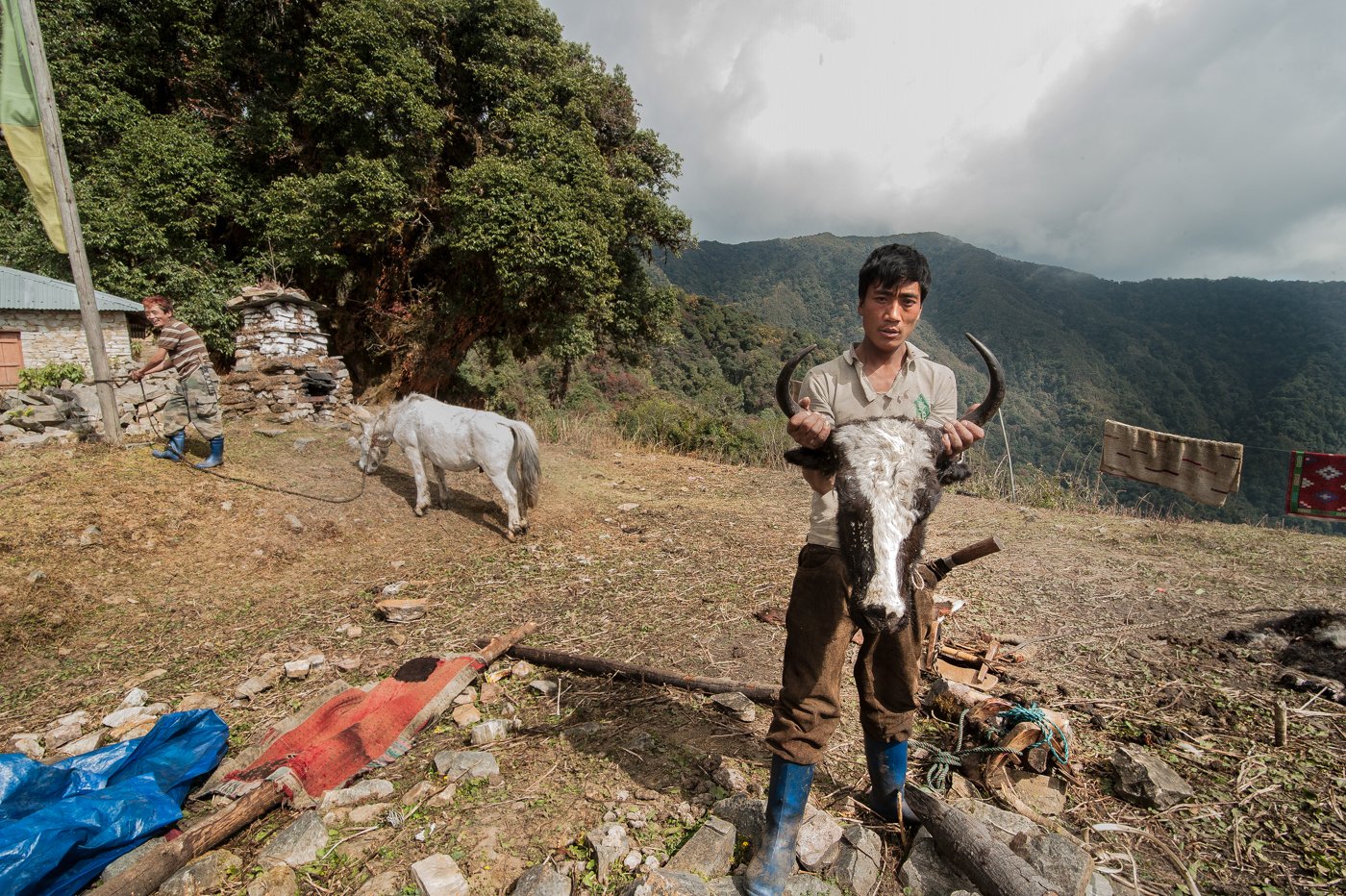 A Brokpa herder with a dzo that died while descending from the mountains. Since food is scarce in these high-altitude villages, nothing is wasted 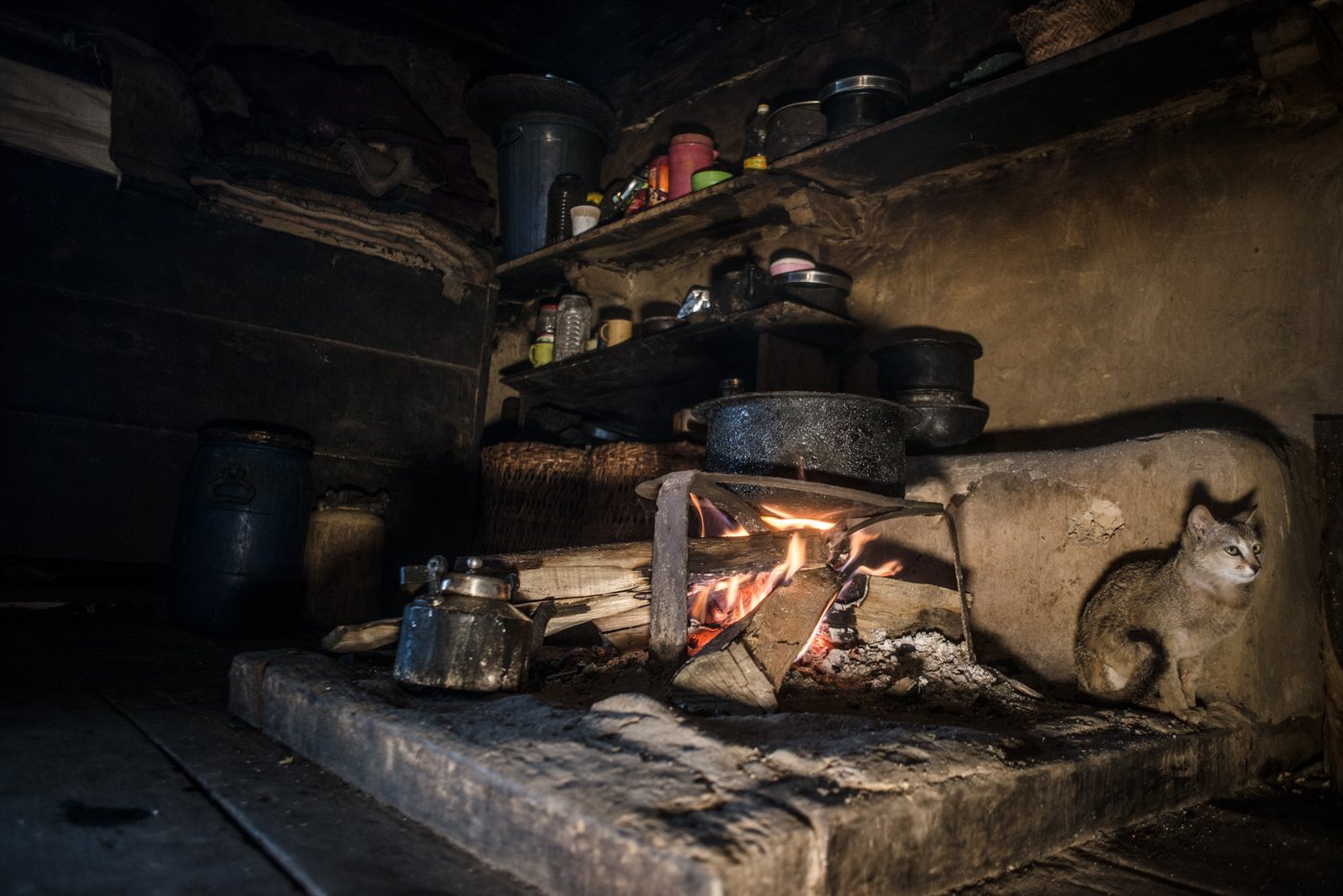 A fire is always lit in the Brokpa kitchen. It helps them – and their animals – stay warm during the harsh winters. A 2014 study notes that daily low temperatures in the region ‘increased greatly’ between 1984 and 2008, and daily high temperatures increased at a rate of 5 degrees Celsius in 100 years 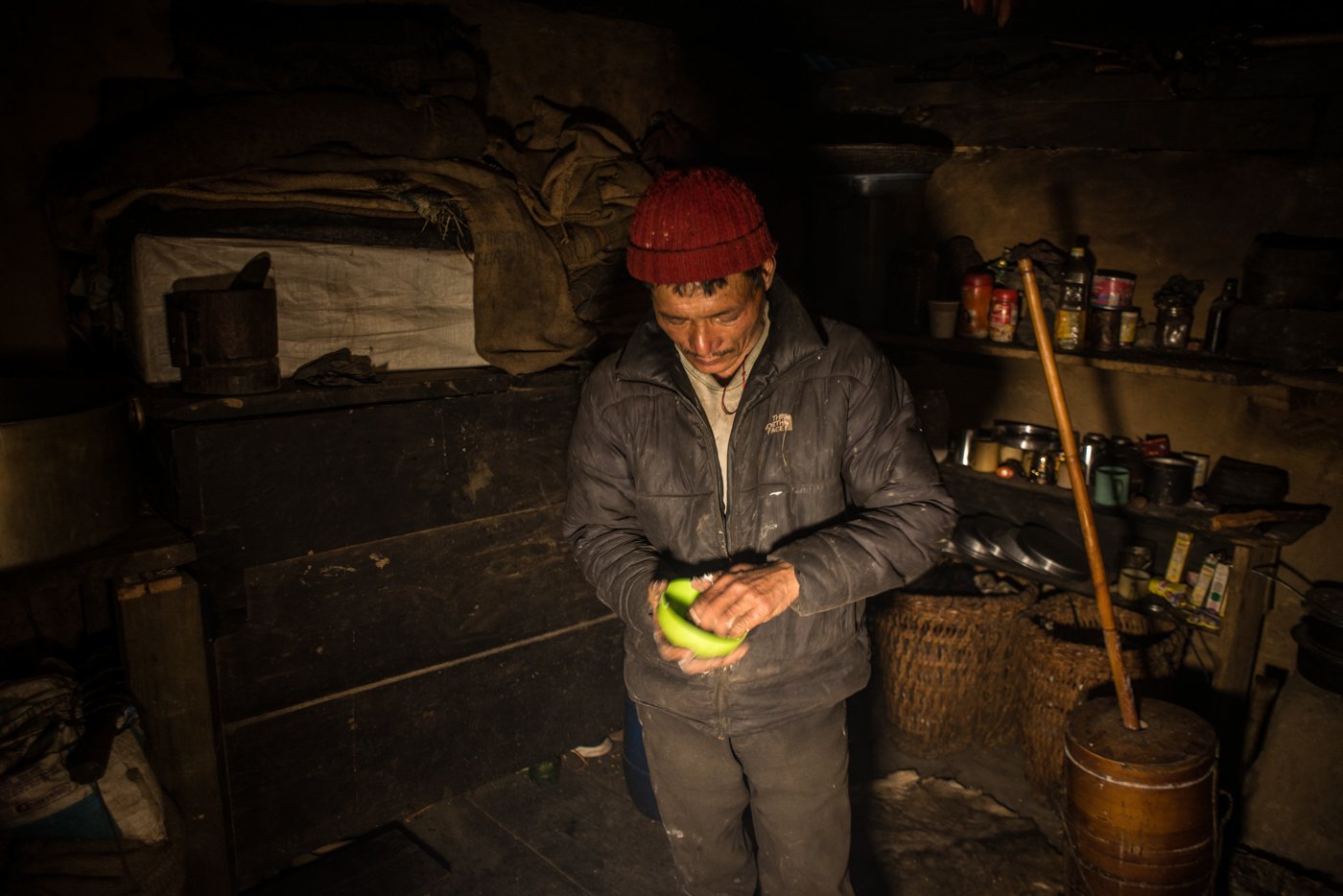 Naguli Tsopa at home with chhurpi, the traditional cheese. This important source of income for the Brokpa herders is dwindling with the falling yak population and the availability of packaged cheese in nearby markets 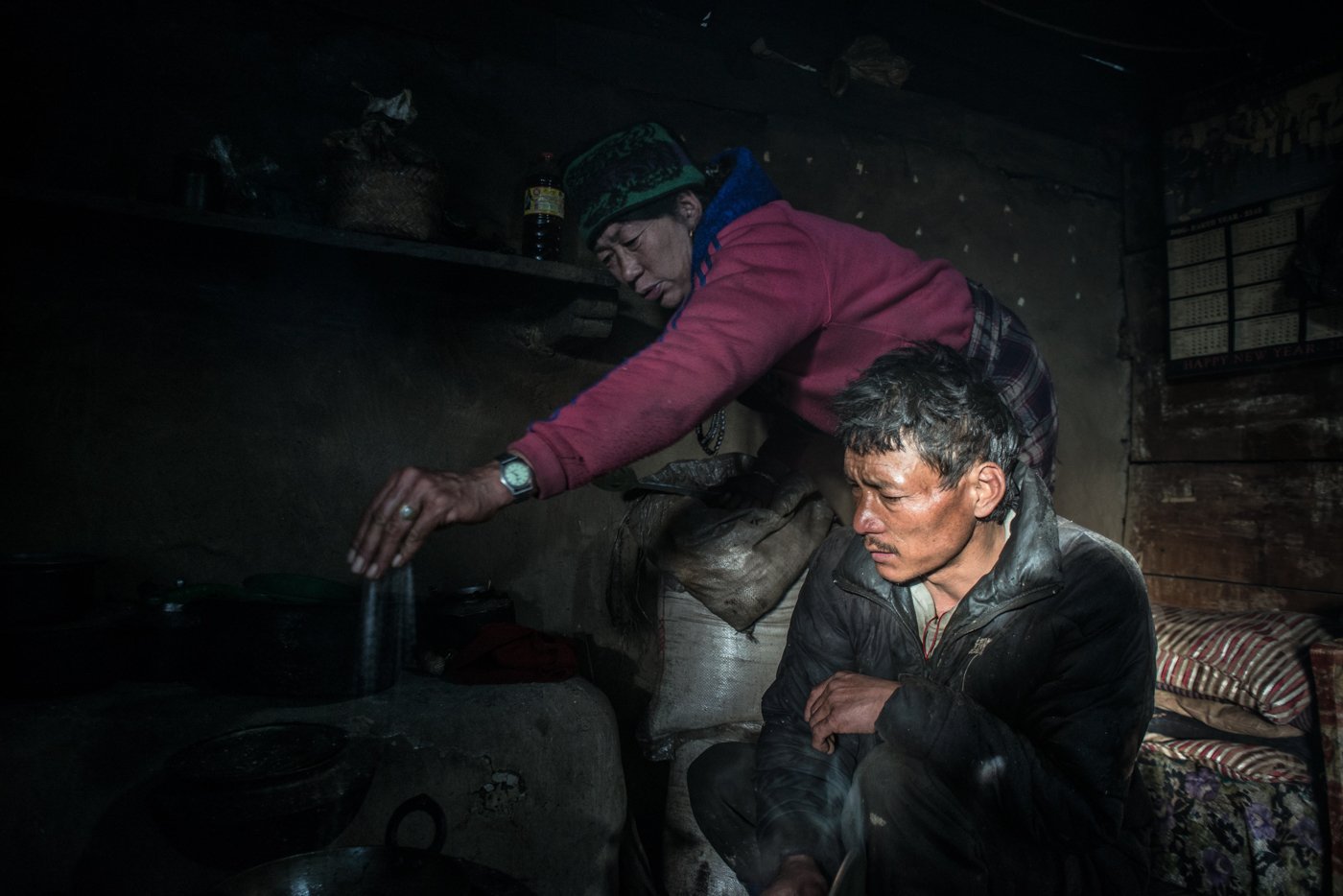 At home in Chandar: Leki Suzuk and Naguli Tsopa. When a Brokpa couple moves in together, they club their herd to optimise grazing resources 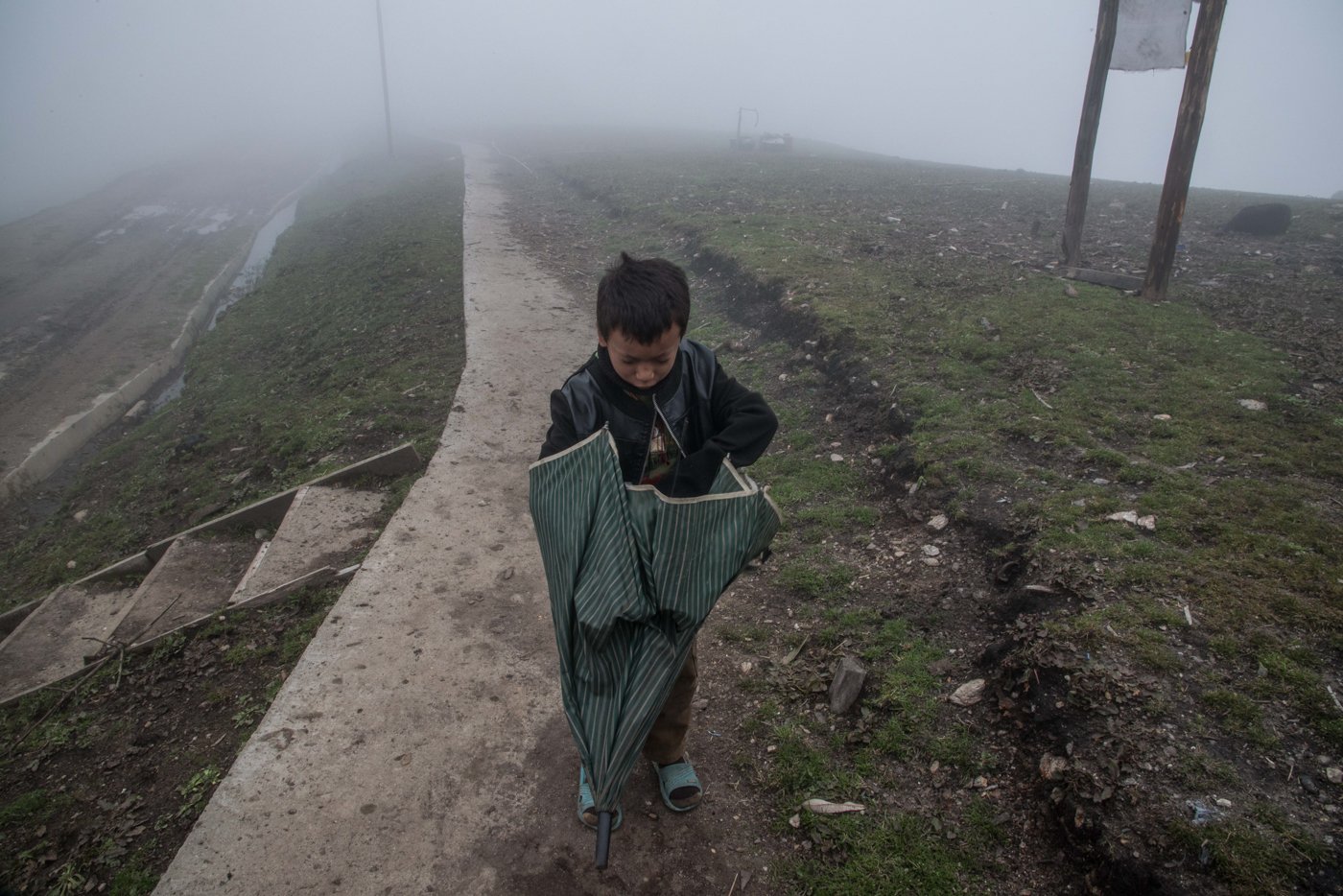