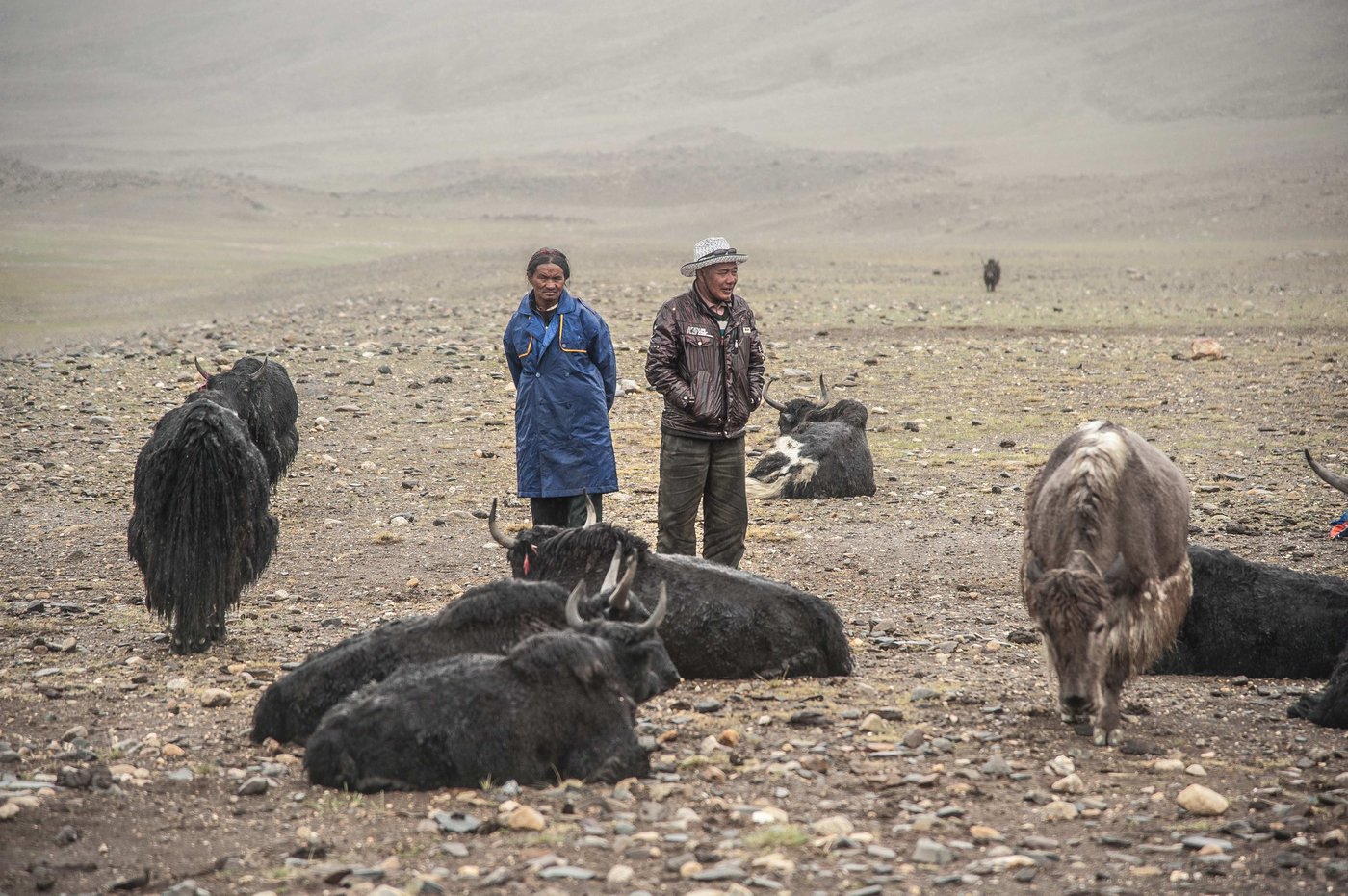 ‘Perhaps we made the mountain god angry’

This story is part of the PARI series on climate change that won the Ramnath Goenka Award for 2019 in the Environment Reporting category.

Those headlines of May 12 this year hit me hard. From my own trips as a photojournalist into the Himalayas, I know that the nomadic pastoralists who rear these animals go to any length to protect them. Across vital stretches of those great mountains, yaks are the lifeline for high-altitude herders – nomadic pastoralists driving a seasonal movement of livestock between fixed summer and winter pastures. Yaks are among their primary means of earning and a food source during wintertime.

Some of the articles with those headlines linked the yak deaths to global warming. It was clear that if the hardy animals were taking such a hit, their herders would be in trouble too. I decided to return to the Changpa families in Ladakh’s Hanle Valley and look at how both were doing.

The Changpas of the Changthang region in India – a western extension of the Tibetan Plateau – are among the foremost producers of cashmere wool, and they also rear yaks. Hanle Valley of Leh district’s Nyoma block is home to several herding units of Changpa – Dique, Kharloog, Maque, Raque and Yulpa. The Dique and Raque are perhaps the finest yak herders there are.

“We are losing a lot of yaks,” says expert Dique herder Jhampal Tsering, 35, in Hanle. “Now, the weather here [in the high mountains] is unpredictable.”  I met Tsering thanks to Sonam Dorjee of Khaldo village in the valley, who works at the Indian Astronomical Observatory in Hanle. Tsering talked to us in his spacious khur (army tent in the Ladakhi language) at the Taknakpo grazing ground located at about 14,000 feet.

Three years before the May 2019 disaster in Sikkim, the Nepal-based International Centre for Integrated Mountain Development had published a paper noting “the yak population in Bhutan, India and Nepal has shown a declining trend in recent years.”  The researchers found a fall in the yak population in India “from 132,000 in 1977 to 51,000 in 1997.” A decline of over 60 per cent in just three decades.

Data from the local Department of Animal Husbandry and Dairying show that Leh district’s yak population decreased from 30,000 in 1991 to 13,000 in 2010. That’s a steep 57 per cent fall in two decades. The local data seem at variance with the ‘official’ figures at the top – which place the yak population in the district at 18,877 in 2012 (in which case the decline would still have been a sharp 37 per cent in 21 years) 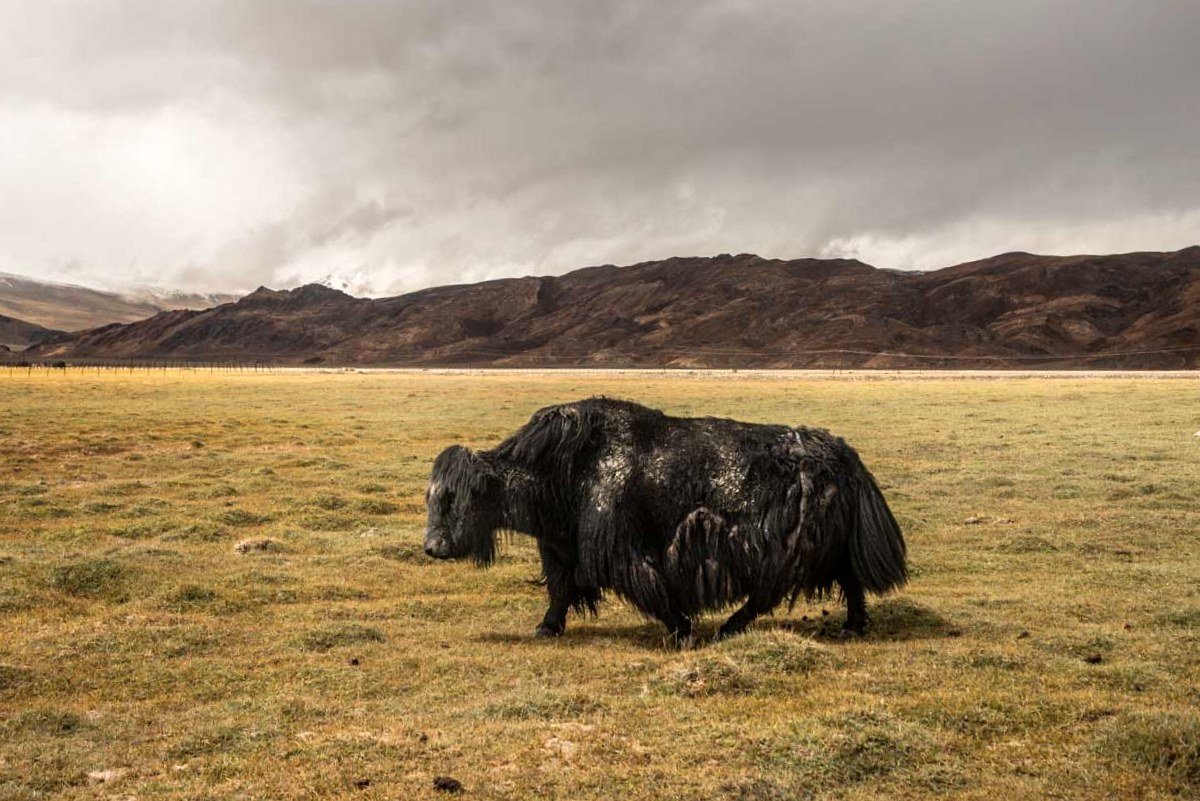 It wasn’t easy reaching the Dique settlement. Their grazing grounds are higher than those of other herding units. Besides, some of the areas they tent in are close to the India-China border – places where civilians aren't allowed. Since it was springtime, though, with Sonam Dorjee’s help, I reached the settlement.

“Yaks are marvellous creatures,” says Jhampal Tsering. “The yak is accustomed to freezing temperatures and can survive anything up to minus 35 or minus 40 degrees Celsius. However, it finds it troublesome when the temperature rises to 12 or 13 degrees. Throughout the harsh winter, because of their slow metabolism, they can conserve body heat and survive. But fluctuations in the weather put the yaks in trouble.”

At Kala Pari (Black Mountain), around 40 kilometres from the Dique settlement, I met Tsiring Chonchum, one of the few women yak owners in Hanle Valley. “Because it is warmer than earlier, the sheep, pashmina goats and yaks don’t have the dense growth of hair on their body as they did in the past. It is a very sparse and light growth now,” she says. “They seem to be weaker. Weaker yaks mean lower productivity for us. Less milk, lower income. Our earnings from yaks have gone down drastically over the last five years.” Chonchum is a transhumance pastoralist from the Raque herding unit. Studies by independent researchers show that the average monthly income of a herder household here, from all sources combined, was around Rs. 8,500 a month in 2012.

Yak milk is a significant segment of the herder’s income and may account for 60 per cent of the total earning from rearing yaks. The rest of the Changpas’ income flows from khuloo (yak hair) and wool.  So with the falling yak numbers and the decline in milk production, their earnings take a nasty hit. All these changes are placing the yak-related economy under great stress.

“It also doesn't rain on time or snow on time anymore,” says Tsering Chonchum. “So there is not enough grass on the mountains. Because of this, the number of [pastoral] nomads coming here has gone down. I will say that they have reduced to about 40 per cent [of the estimated 290 families of herders there] because of these changes, due to the scarcity of grass and the problems arising out of that.

My son works at the local observatory – which gives me some relief. Many young people from Changpa families have started working for the Border Roads Organisation or the General Reserve Engineer Force as daily wage labourers on road building schemes.” Several have migrated in search of jobs elsewhere.

That son working in the local observatory is Sonam Dorjee, who has helped me pull off this trip.  Sonam himself has been a careful observer of the changes in the mountains. 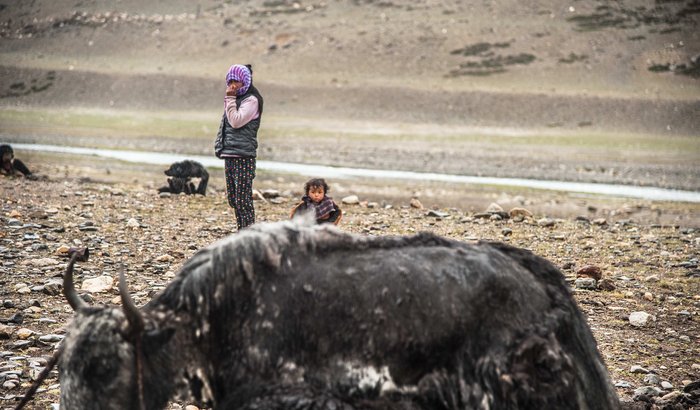 'There have been many alterations in the weather. When I was 15 it used to be much colder here...those who knew say that it would dip to minus 35 Celsius’

“There have been many alterations in the weather,” he says. “When I was about 15 (I'm 43 now, so I'm talking about almost 30 years ago), it used to be much colder here. I did not measure the temperature then myself but those who knew say that it would dip to minus 35 Celsius. So people's clothing had to be suited to bear that kind of harsh cold. Not the synthetic material jackets that they wear now. Everything they wore was woven from the wool of pashmina goats – caps, dresses, everything. The shoe soles had a flattened bit of yak skin on the inside and the shoe was made from local cloth and had strips to tie it up, right up to knee length. Now you don’t see those kinds anywhere.”

A warming is underway, say researchers Tundup Angmo and S.N. Mishra in their 2016 paper on Impacts of climate change in Ladakh and Lahaul & Spiti of the western Himalayan region . “Data obtained from the meteorological department (Air Force Station, Leh) clearly indicates that there is a rising trend of min temp at Leh by nearly 1º C for all the winter months and nearly 0.5ºC for summer months in last 35 years. There is a clear declining trend in precipitation from November to March i.e. reduction in snow fall.”

They also say: “Over the last few years, impacts of global climate change have been increasingly visible in Ladakh and Lahaul & Spiti. Rainfall and snowfall patterns have been changing; small glaciers and permanent snow fields are melting, affecting water runoff in the rivers/streams, and rise in temperature and humidity inducing favourable conditions for the invasion of insects and pest aggression.”

Back in Jhampal Tsering’s tent, his friend Sangda Dorjee had asked us: “How many rebos have you seen this time?”

The Changpas live in tents known as rebos . To make a rebo , yak wool is spun into yarn by the families, then woven and stitched together. The material protects the nomads from the extreme cold and icy winds.

“Most of the families do not own a rebo [now],” says Sangda. “Where’s the wool for stitching a new rebo ? The quantity of yak wool has gone down drastically in the past few years. Without the rebo , a significant part of our nomadic lifestyle is gone, and I blame the warmer winter.”

I begin to realise that incident in May in Sikkim was not entirely random. Worse could be ahead. The herders do not use the words climate change but seem to describe its impacts quite well. And they do understand that very major shifts have occurred, as Sonam Dorjee’s and Tsering Chonchum’s words show us. They also understand that some of the major variations, even transformations, have been significantly driven by human agency. Maybe that’s why veteran herder Gumbu Tashi, in his 60s, told me: “Yes, I know the climate in the mountain is tricky. Unpredictable. Perhaps we made the mountain god angry.” 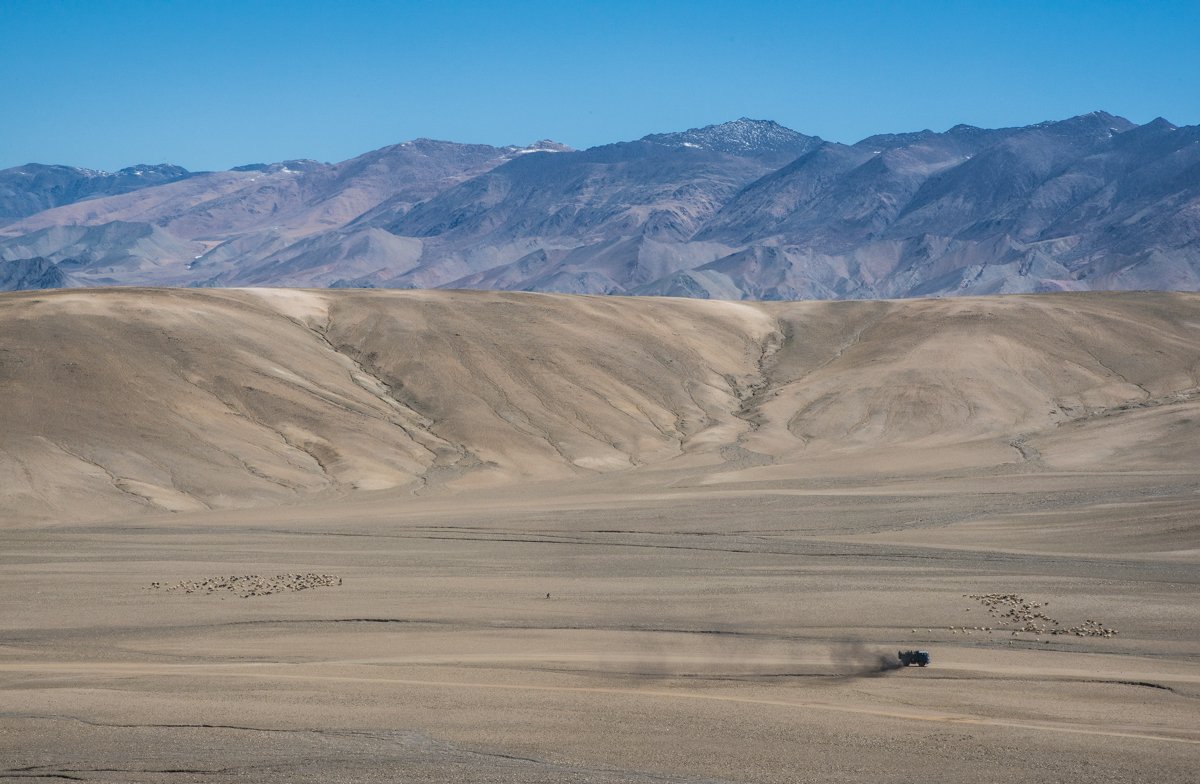 Across vital stretches of those great mountains, yaks are a lifeline for high-altitude Changpa herders, their primary means of earning and a food source during wintertime 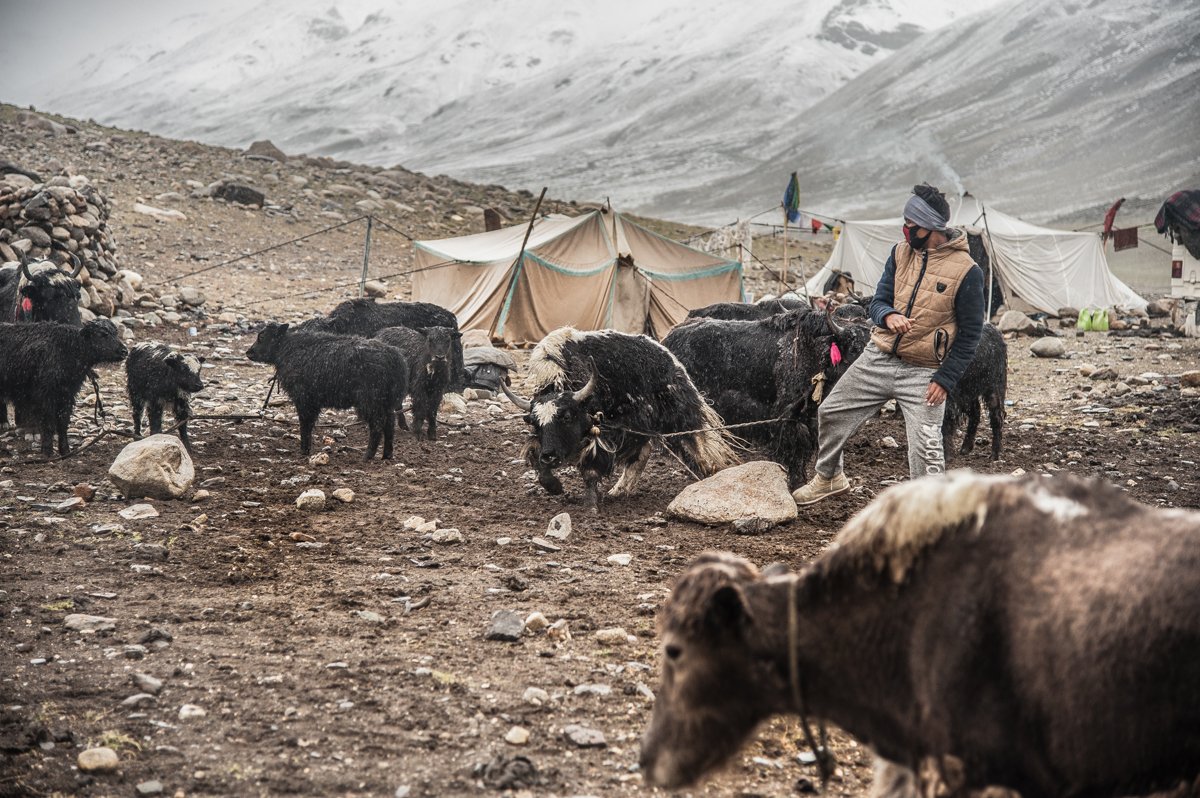 Weather alterations are affecting the livestock of Changpa pastoral communities – yaks, pashmina goats sheep – who depend on high altitude pastures for grazing 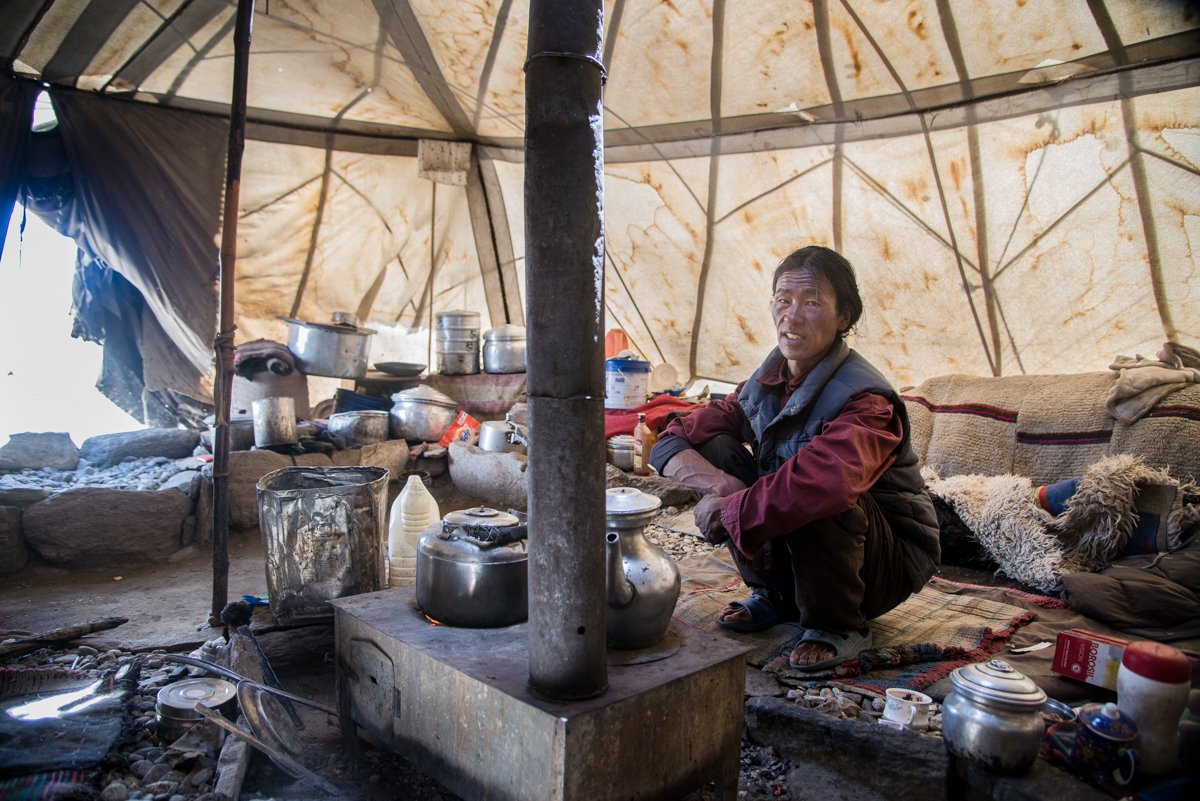 With changes in living patterns, most of the Changa families no longer use the traditional rebo , a tent made from yak yarn; instead, they use army tents procured from Leh town 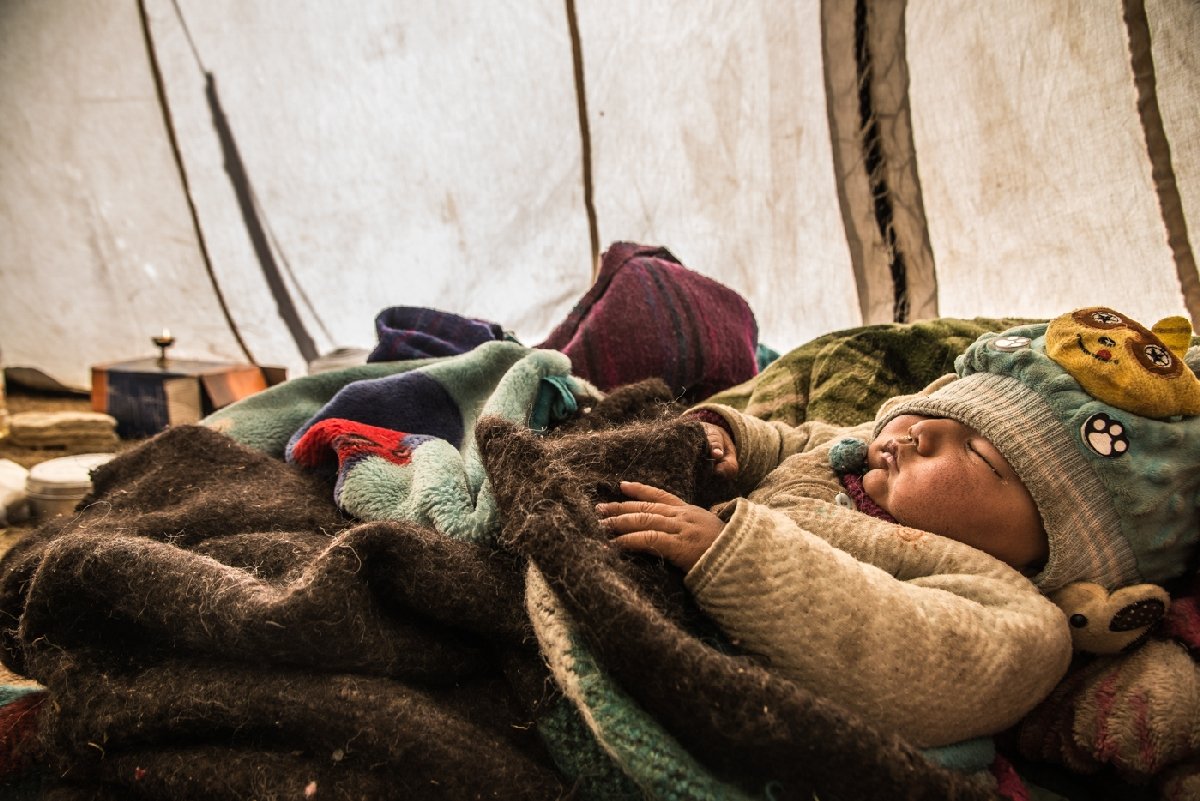 Still, communities do continue to make various other products derived from the yak. Here, little Donchen sleeps peacefully covered by a blanket of yak wool, while her mother is out grazing the family’s animals 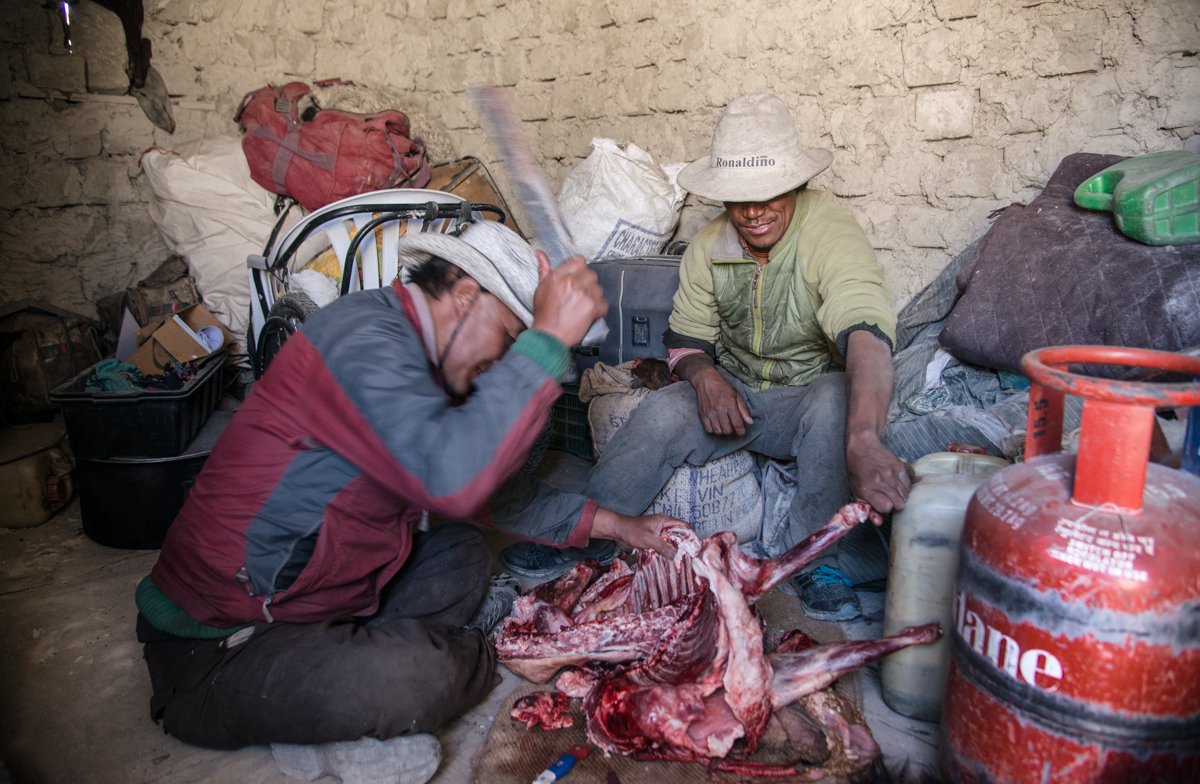 Yaks are also a source of food – milk and meat – for the nomadic pastoral communities of the Changthang plateau. Killing animals for meat is against community practice, but if a yak dies naturally, families use some of its meat to help them survive the long and extreme winters 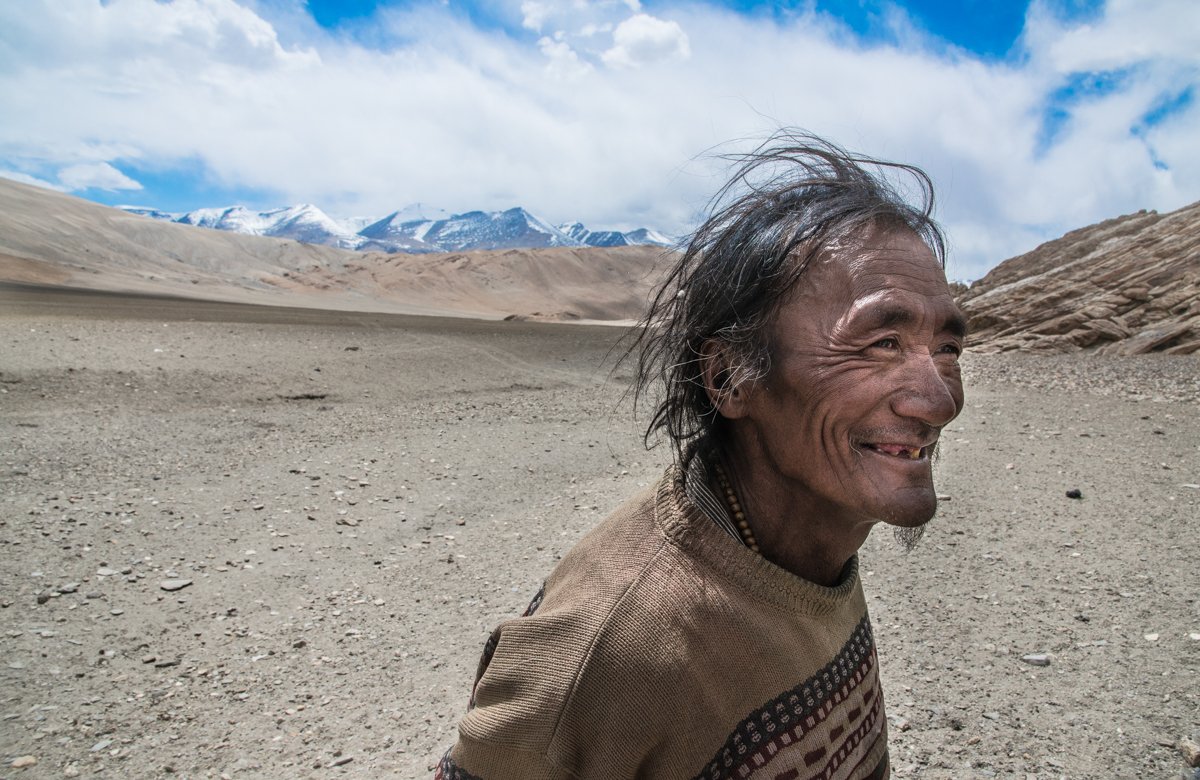 Gumbu Tahsi, of the Raque unit of the Changpa community, owns around 80 yaks. He and others here speak of the challenges to their traditional life of nomadic grazing 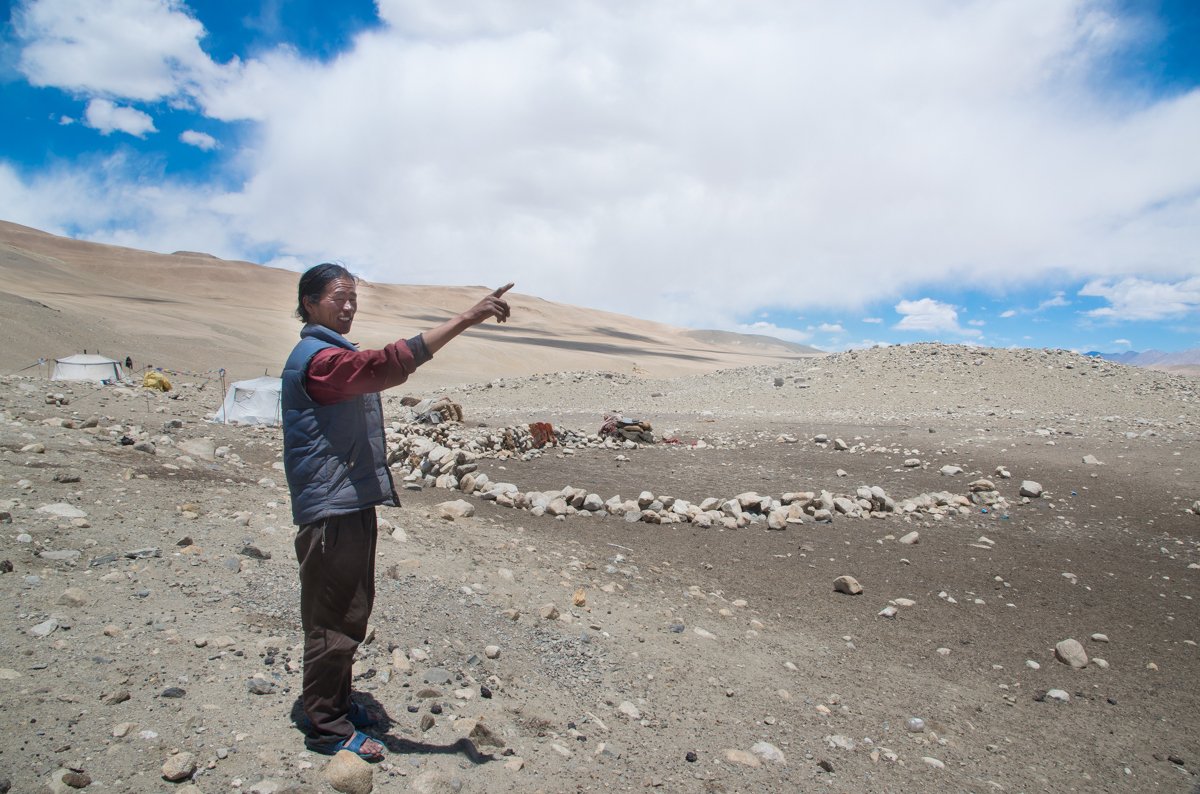 Gonpo Dondrup points to a nearby grazing pasture where grass doesn't grow anymore, and he has to climb higher searching for food for his yaks 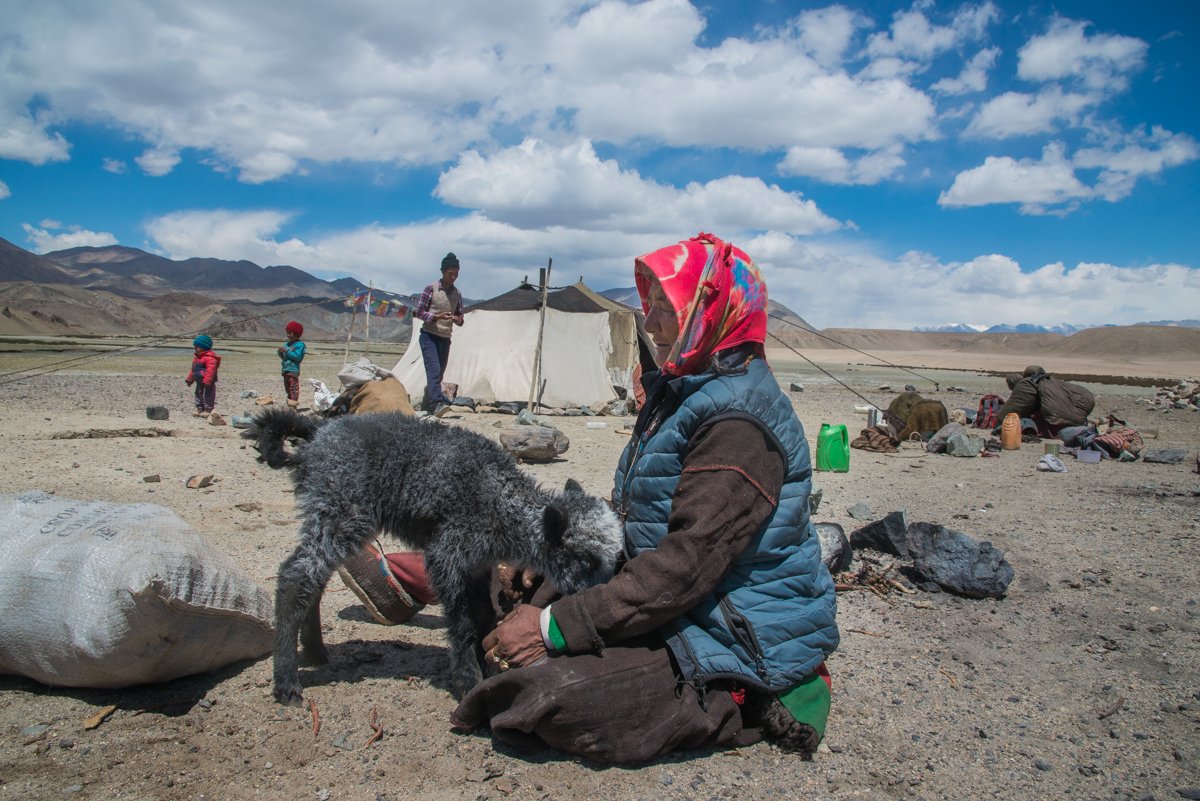 Tsiring Chonchum with an orphaned yak cub. She is one of the few women yak owners in Hanle Valley 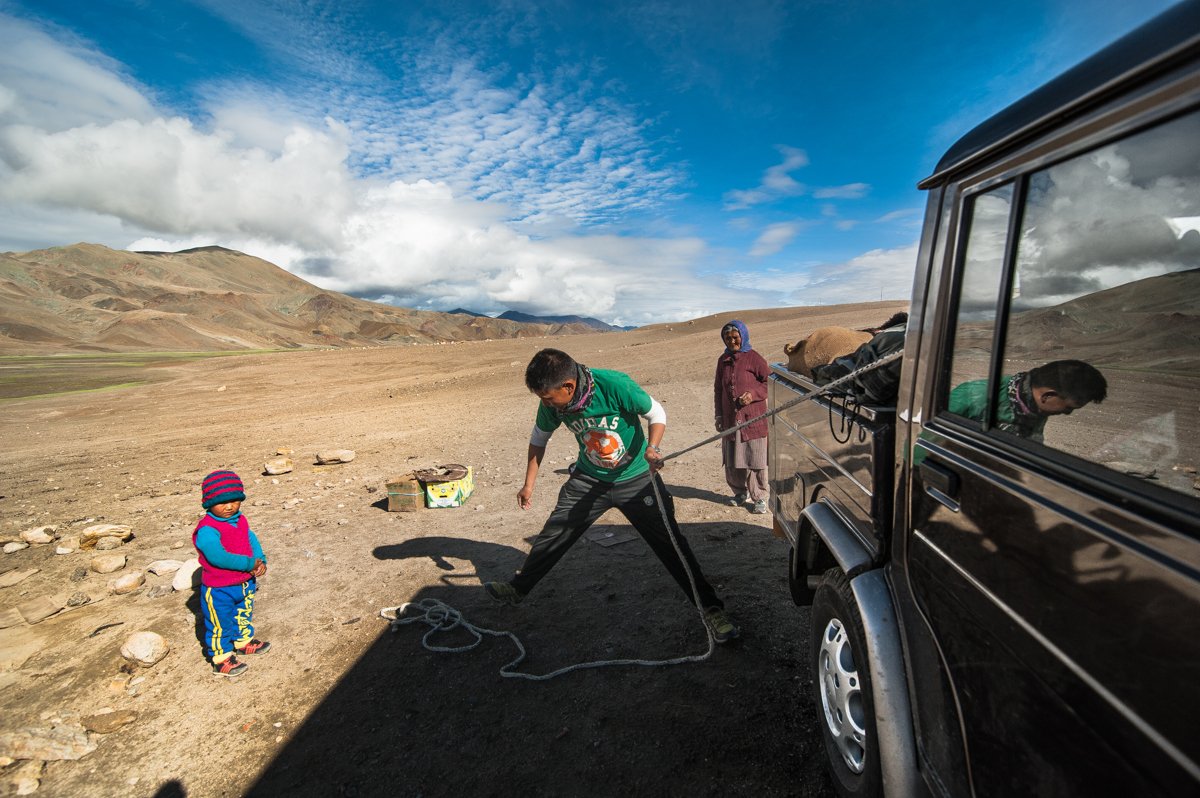 With the growing scarcity of grasslands for their animals, the nomadic pastoralists change their locations more frequently than in the past 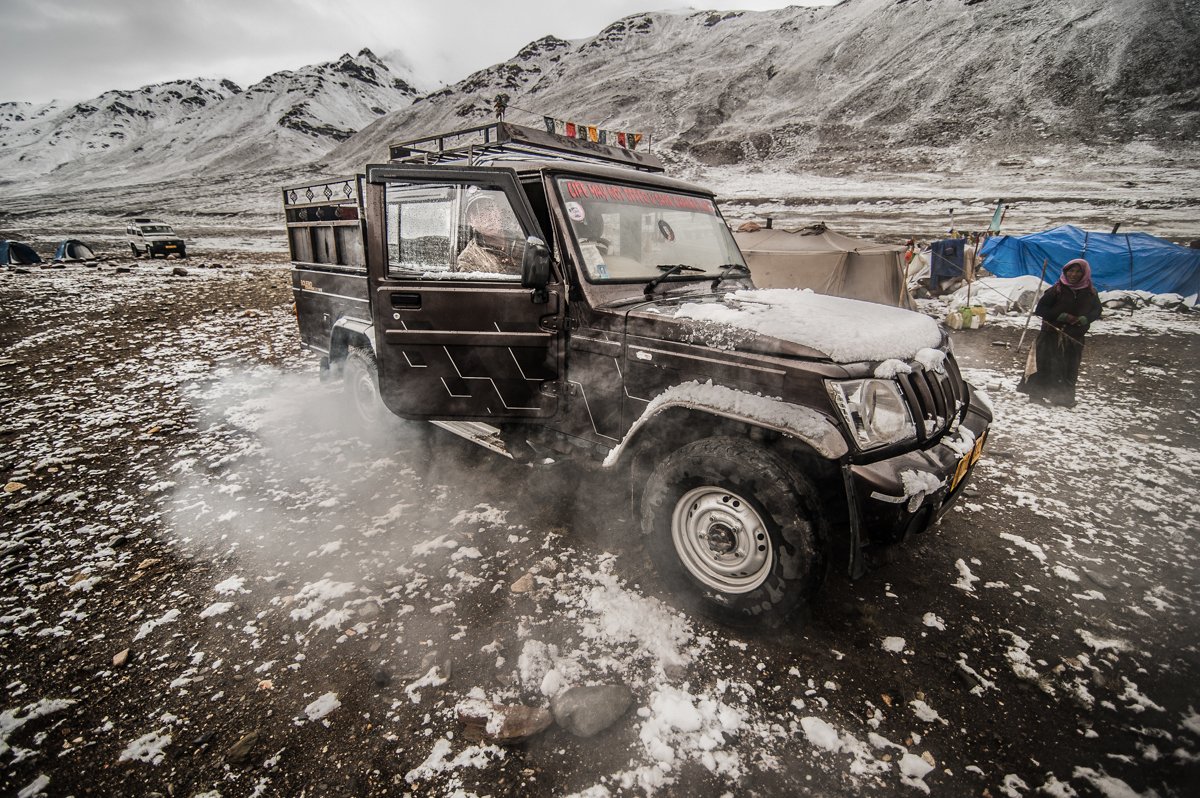 Life in the harsh winters here is tough for both humans and animals. Here, a Changpa herder leaves for Leh town to bring medical supplies for his family 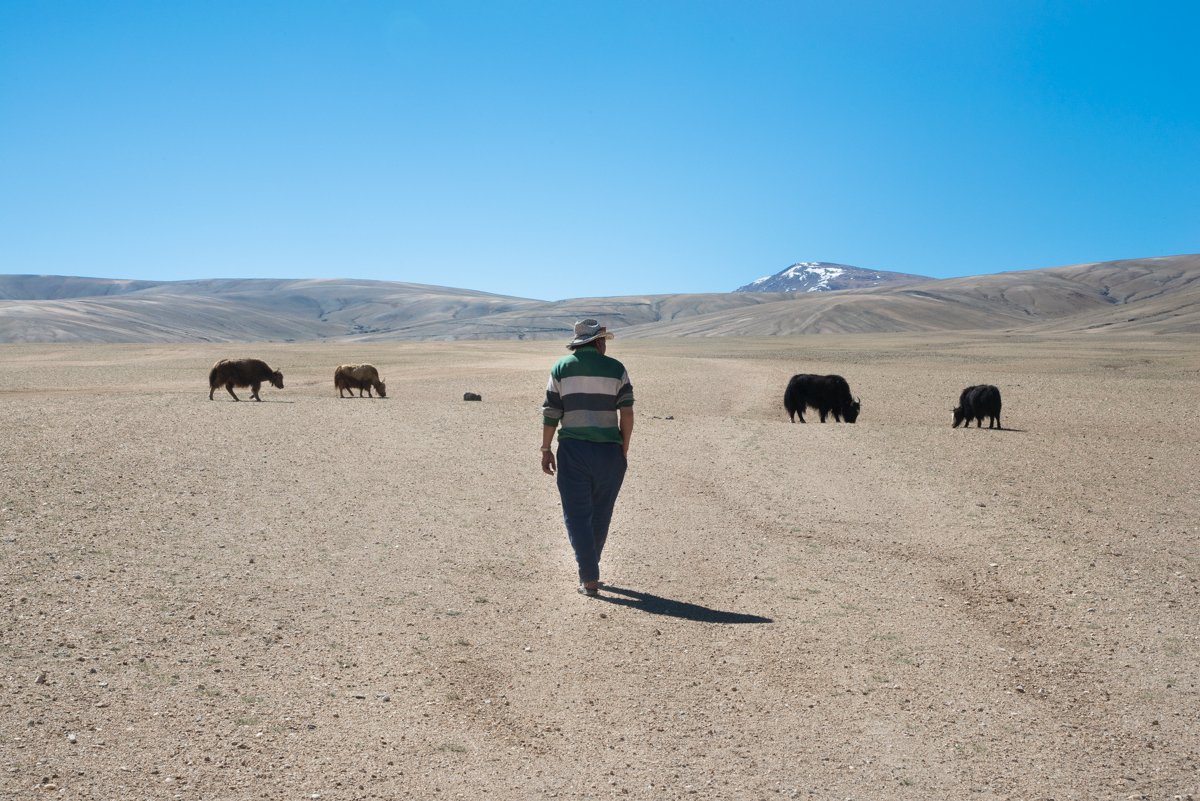 At a high plain in Hanle Valley, Karma Rinchen (also in the cover image with Norla Dondrup) walks across barren land increasingly devoid of grazing pastures