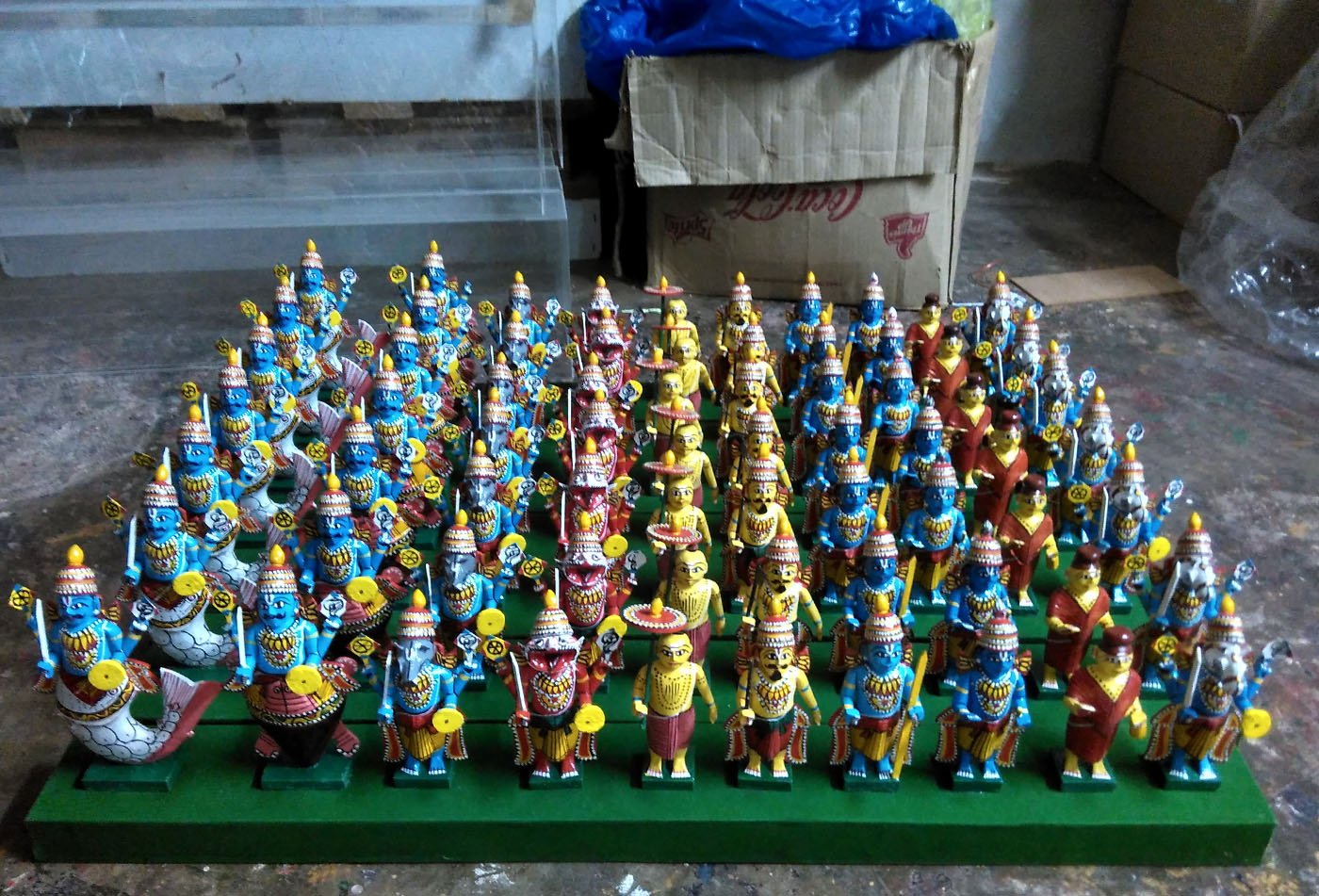 No longer a toy story

Toy-makers in Kondapalli village of Andhra Pradesh have made wooden toys for generations, but now fear that their signature craft may not survive beyond the decade

Korella Venkatachari’s three-room house is strewn with toys on the floor, paint containers lie in one corner and unused wood in another. “I have been carving toys for 28 years,” he says, proudly.

Venkatachari is amongst the 229 toy-makers of Kondapalli (‘village of hills’, roughly translated) in Krishna district of Andhra Pradesh, a village flanked by the lush green Eastern Ghats and the Narla Tata Rao Thermal Power Station.

He and other the artisans have for generations made signature Kondapalli toys. His entire family does this work. He carves the wood, his wife Jyothi paints the toys. Their 18-year-old daughter Mounika dropped out after Class 10 and now helps her parents to make toys.

Left: Wooden bullock carts and elephants outside a toy shop in Kondapalli. Right: A workshop used by the artisans

The road in the village that leads to a Reddy dynasty fort is filled with houses and shops where the toys are made and sold. Most of the artisans make the toys at home, with all the members of the family sharing the work. A few mass-production workshops in Kondapalli also employ the toy-makers on daily wages to craft, carve and paint. Most of the toys are sold wholesale on orders from cultural platforms like Shilparamam in Hyderabad.

V. Venkayya, 80, who has been making toys for 57 years, says, “We generally make what we see and what we relate to in everyday life. The most prominent of the toys here are bullock carts, and animals like cows, peacocks and others. We also make toys of mythological and fictional characters. But what I love is depicting the things and people I see every day.” 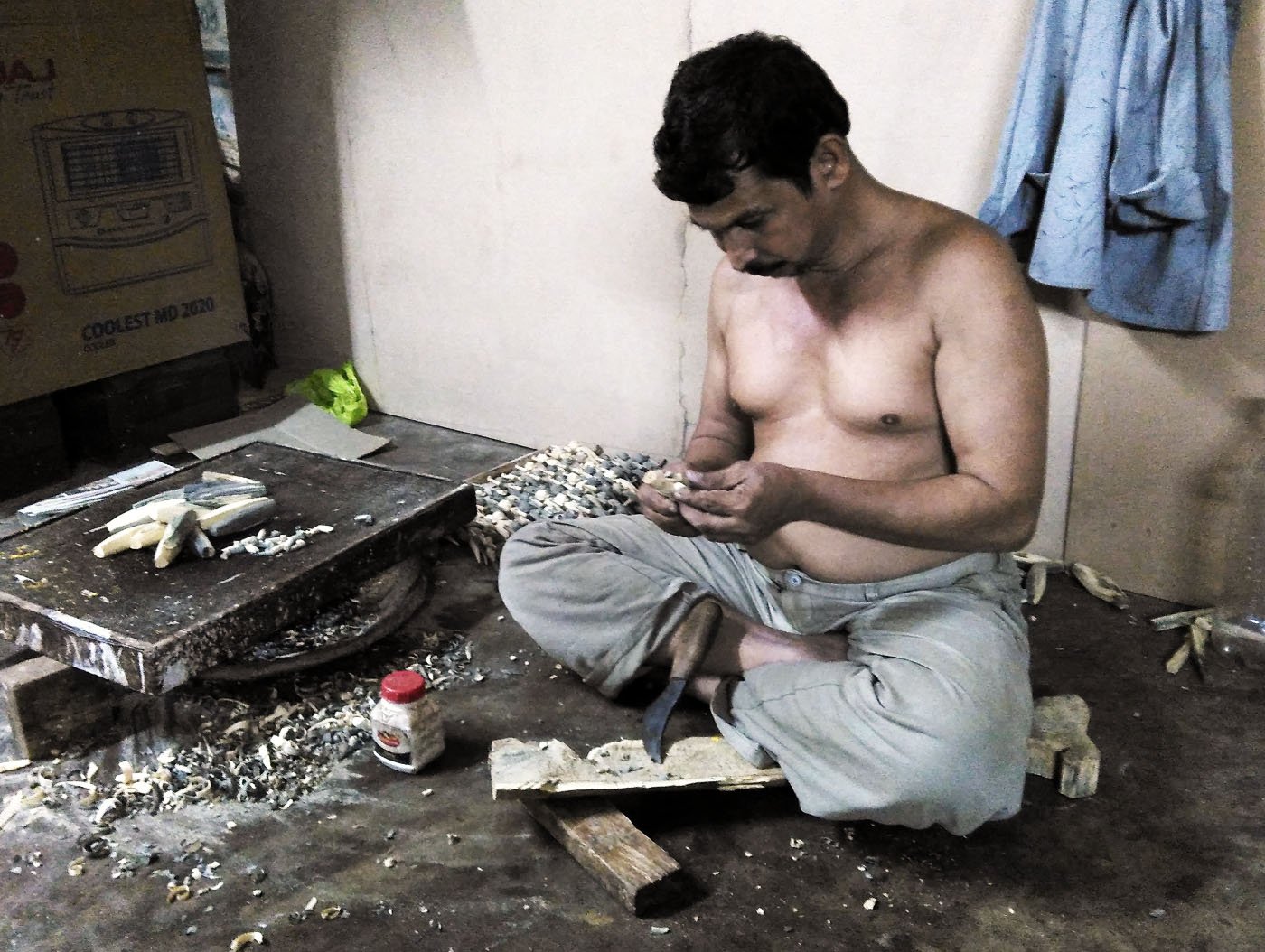 Kondapalli’s toy tradition dates back a few hundred years. In the 16th century, Anavema Reddy invited around 10-12 families, all wooden handicrafts specialists from Rajasthan, to his court, says Nageshwar Rao, 37, a toy-maker. “All these families from the Nakarshalu community migrated to Kondapalli.” The Reddy kings, impressed by their skill, patronised the artisans and asked them to stay there forever. “They were offered the soft poniki wood from the Eastern Ghats as raw material for the toys. We still get the wood from these ghats,” he says.

Over the centuries, the skill moved beyond the Nakarshalu community, and it is no longer a caste-specific occupation. Members of various communities and castes, including Padmashali, Kamsali, Vishwabrahmin, now work in the Kondapalli toy industry. Records of the Mutually Aided Cooperative Society (MACS), established in 2002 by the artisans, show that in February 2017, of the 229 toy-makers in the village, 107 are men and 122 women. Of these, 53 are Dalits, 128 are from Other Backward Classes, 26 are Muslim, and 22 are from other, landed castes.

“Interest [or circumstances] and not caste, is the parameter for anyone to learn this craft,” says Rajya Lakshmi, 33, who has been painting toys for 18 years. “When I was in Class 10, my family was not able to manage on the earnings of my parents [both toy-makers]. I am the eldest daughter and I had to discontinue my studies. Many of us were forced to enter the toy industry as there are hardly any other employment opportunities around. Here, generally, if children are not doing well in studies or if the financial condition of the family is bad, they are employed in the toy industry. Boys are taught carving work and girls are taught painting.”

Like Rajya Lakshmi, many others have dropped out of school to make toys. P. Sathyabhama, 33, has been painting toys since she was 13, after completing Class 7. She is a daily wage worker in a workshop owned by Udayagiri Sesha Rao, secretary of the MACS. “I was paid 5 rupees while I was learning 20 years ago. I earn 100 rupees a day now after painting from 10 a.m. to 6 p.m. I go back home, stitch a jacket or two which earns me around 50 rupees, attend to my daughters and husband, cook, and complete the household chores. It is midnight when I get to rest my back. I wake up at 5.30 a.m. to again start the day.

V. Durga, who works with Sathyabhama, says, “We are forced to work for 365 days because no work means no food that day. We only take off on those days when there is an emergency or any health issue.” 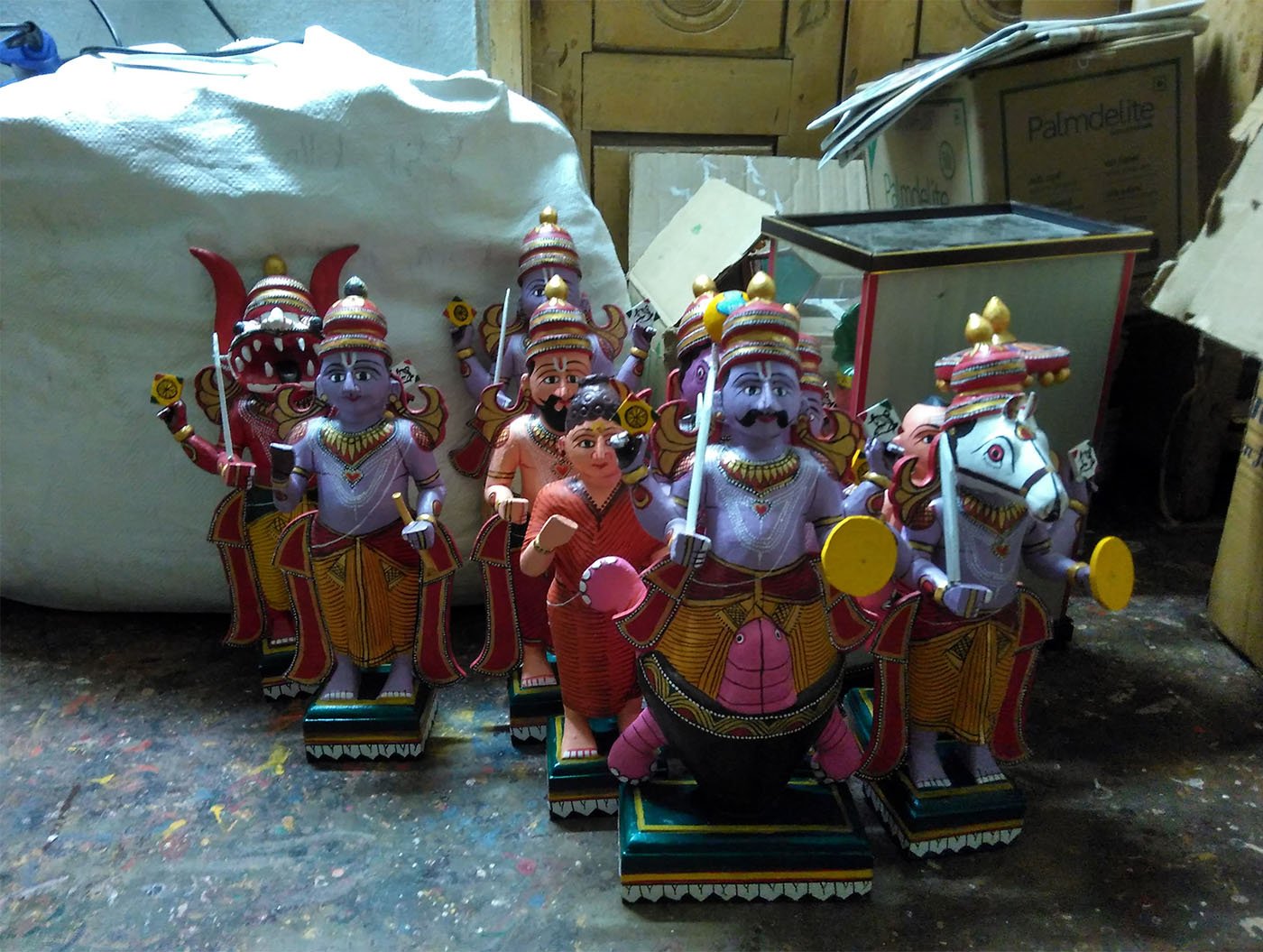 Wooden idols depicting the 10 avatars of Vishnu: 'We also make toys of mythological and fictional characters,' says V. Venkayya, 80. "But what I love is depicting the things and people I see every day'

Durga’s dilemma reflects that afflicting millions of artisans and skilled craftspersons across India. Theirs is a fragile world. Successive governments have shown no genuine interest in keeping alive these extraordinary skills. With mechanisation and automation, mass-produced plastic toys have flooded the markets everywhere. The resultant loss of markets and income has been devastating. Also gone is the old world patronage they once enjoyed from affluent local powers. Indebtedness makes it impossible for them to invest in small enterprises of their own and forces them to sell to commission agents or to little ‘toy-factories’ that market the products as their own.

And so the toy tradition of Kondapalli is on a slow decline. “The state government has never helped us,” says U. Sesha Rao of MACS. “We owe even this building to LANCO [Lagadapati Amarappa Naidu and Company, a business conglomerate]. They have been helping us since long.”

The first cooperative society, V. Venkayya says, was formed in 1937-1938. “But the art started losing its sheen and demand during the 1990s, when the era of mechanisation and newer technologies started. The art might sustain for a maximum of 10 more years if the government continues to ignore the issues of the artisans.”  These issues include housing, pension and artisan identity cards.

Nageshwar Rao also believes the Kondapalli tradition might not last beyond a decade. "In many sequences in Tollywood films, top stars like Rajendra Prasad and Chiranjeevi refer to the female lead characters as Kondapalli ‘ bomma ' (‘toy'),” he says. “But the sad part is, these references in popular culture have ended at comparing beautiful women to our toys. It has not translated into showcasing our work, our toys, or our lives.”