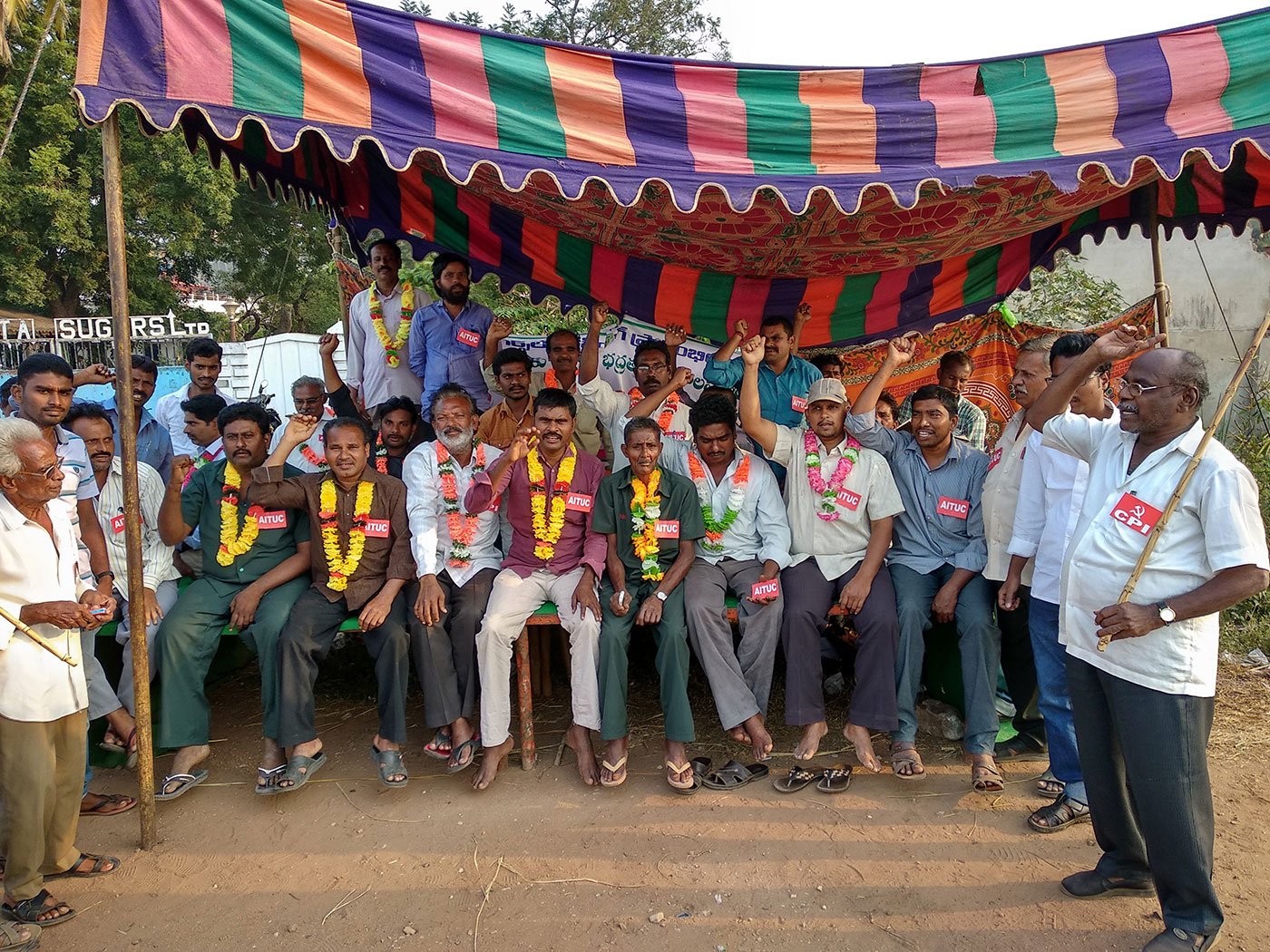 Workers at the Delta Sugars factory in AP's Krishna district were recently unlawfully retrenched. They believe the factory was closed to cash in on rising land values, given its proximity to the new capital of Amaravati

It’s been three months since Yarraguntla Nagaraju lost his job of over 30 years in the Delta Sugars factory. He had worked there as an electrician from the age of 18, ever since the factory was established in 1983.

In the last week of November 2017, he and 299 other employees, most of them from landless Dalit communities, were told to stop coming to work from December. No notice period was given. “We have not been paid our salaries since two months, and now the management is closing the company under the pretext of losses,” Nagaraju said when I met him in November. At the factory, he was the leader of the workers’ union, affiliated to the All India Trade Union Congress.

From November 26, the jobless workers sat on a relay hunger strike in a makeshift tent in front of the factory. Their demands included payment for the two months they had already worked and a severance sum equivalent to 24 months of salary for each worker. Many of the workers are the lone wage earners in their families, and they struggled to keep their households running during the weeks of protest outside the factory’s closed gates. Nagaraju, a permanent employee who was earning Rs. 14,000 a month when he was fired, started to draw on his savings. His wife is an agricultural labourer and his son drives an autorickshaw. 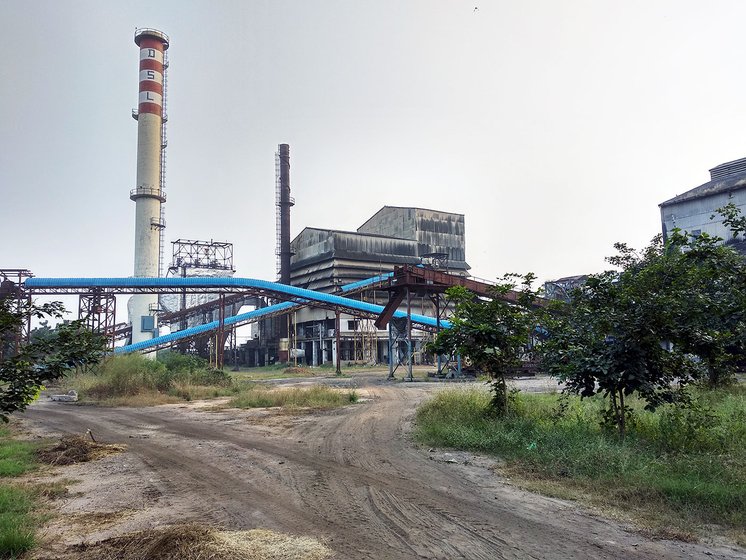 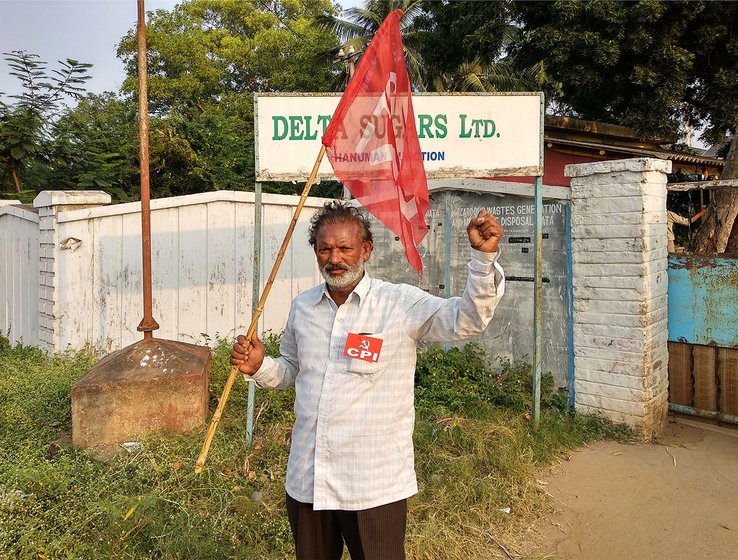 By the end of December, a compromise was reached. PVS Subrahmanyam, the deputy commissioner of labour, Krishna district, told me that according to the deal, the workers took back the case they had filed against Delta Sugars in the labour court (under the Industrial Disputes Act). In exchange, they got four months of salary from the company, plus the two months of pending wages. That’s  20 months short of the compensation they had demanded.  “We don't have the resources to fight the case in the court. And a case will take years and years to get resolved. So all of us together decided to compromise," says Nagaraju.

The workers allege that since 2014, the company has not contributed to their Employee Provident Fund (EPF) or the Employees’ State Insurance (ESI). Besides, their total accrued EPF and ESI dues have not been paid after the factory’s recent closure, despite the compromise between the workers and the owners. And the roughly 50 workers (of the 300), who were not permanent employees, are not even deemed eligible for EPF or ESI payments. “I was told every time [I asked] that I would become a permanent employee ‘next year’,” says Mangalagiri Rangadasu, 32, who worked at the mill as a trolley driver. “Fourteen years have come and gone and now they are removing us from the factory altogether.”

The  protest committee formed after the abrupt closure of Delta Sugars disputed the owners’ claim that the factory was being closed because of losses. “The factory has earned a profit of at least eight crore rupees last year by crushing 1.6 lakh tonnes of sugarcane,” estimates Kesava Rao,  a veteran farmers’ leader of the All India Kisan Sabha.  Besides sugar, crushing sugarcane also produces byproducts like bagasse, molasses (used for making alcohol and ethanol) and filter cake.

(All attempts to get a response or clarification from the factory's management were unsuccessful. The security guards refused to let me enter the premises, while the factory manager, Subba Raju, refused to answer any questions on the phone). 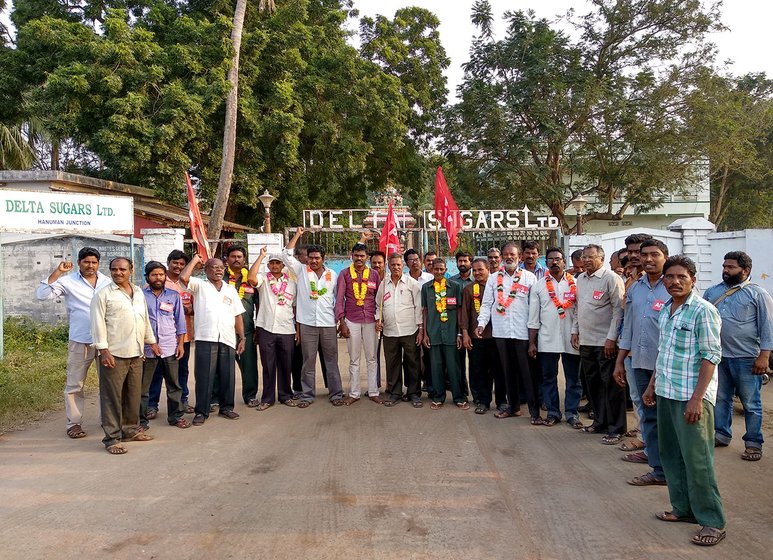 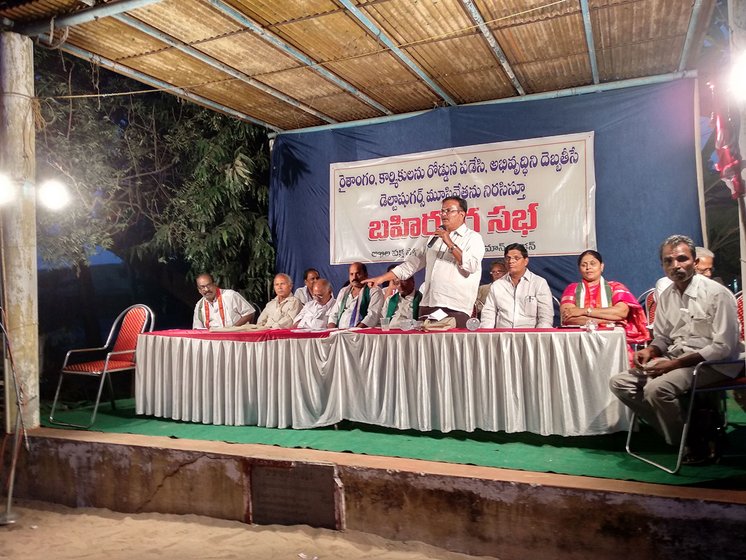 Trade unions and farmers organisations objected to the closure of Delta Sugars, without notice and in contravention of various laws

The Delta Sugars’ factory is located on Hanuman Junction in Andhra Pradesh’s Krishna district, around 40 kilometres from Vijayawada. There were around 10 khandsari mills – small-scale units crushing 100 tonnes a day – in the Hanuman Junction region in the 1970s.  They were replaced by the Hanuman Sugar Cooperative Mill in 1983 that crushed 1,250 tonnes per day (the cane-crushing capacity of Delta Sugars was 2,500 tonnes). The cooperative’s share capital came from the sugarcane farmers in the area (around 3 per cent of the total, which they allegedly didn’t get back when the factory was privatised), as well as the state government.

After the sugar industry was gradually deregulated starting from the 1990s decade of economic liberalisation, the process of privatising sugar cooperatives became easier. So Hanuman Sugar, spread across 116 acres, was sold for a bargain Rs. 11.4 crores in 2001. Registration documents of revenue transactions in the area during 2000-2002 show that the market value of the unit was more than Rs. 400 crores at the time. The buyer was Gokaraju Ganga Raju, a Bharatiya Janata Party member of Parliament and  businessman-turned-politician, who was elected in 2014 from the Narasapuram constituency in West Godavari that adjoins Krishna district. 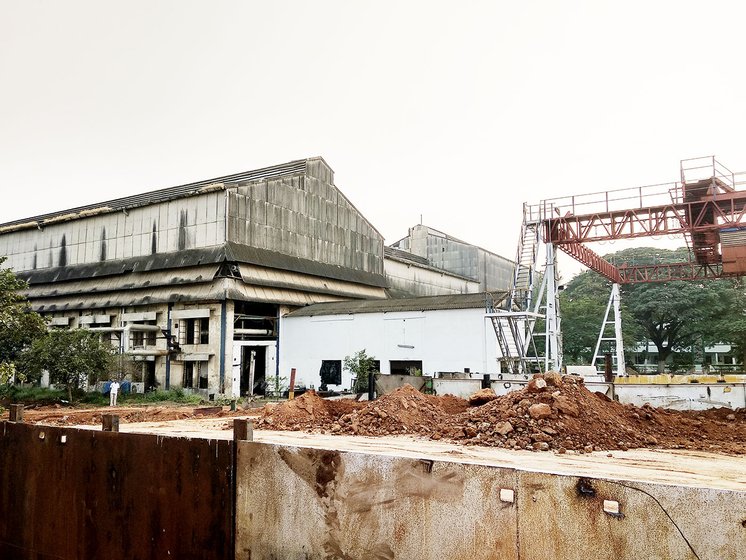 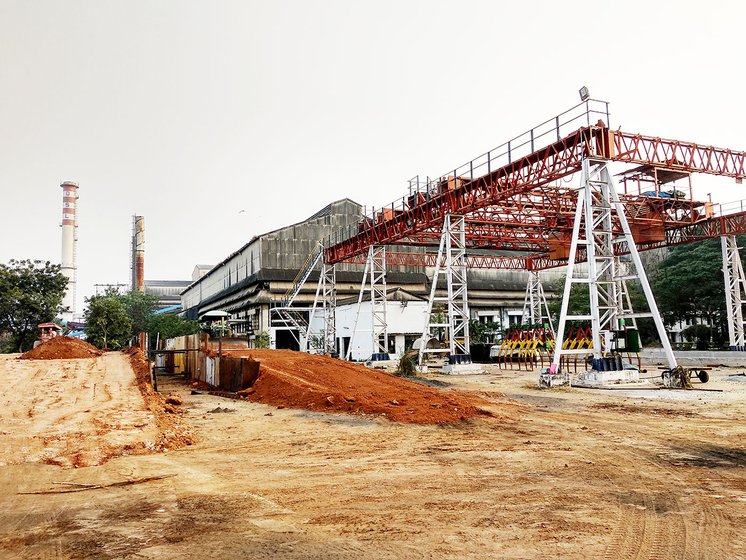 Mill workers dispute Delta Sugars' claims of heavy losses; they believe the factory was shut to make way for more lucrative use of the land

The sudden closure of the factory has also impacted farmers in the region, who supply  sugarcane to this mill (but were paid a lower rate per tonne than what sugarcane farmers get in Uttar Pradesh and Maharashtra, says Kesava Rao). The farmers will now have to find new sugar companies to sell to and find ways to send their produce to far-off cane-crushing units owned by these companies. After this issue came up in the state assembly, the Andhra Pradesh government brokered a temporary solution for the harvest season in December-January. It stated that farmers could unload their cane at the Delta Sugars unit for sale to two other private companies, KCP Sugars at Vuyyuru in Krishna district and Andhra Sugars at Bhimadole mandal in West Godavari district. The two companies would bear the cost of transporting the produce to their factories.

However, there is no clarity about what will happen with the next harvesting season. Farm leaders estimate that farmers will have to spend an additional Rs. 20,000 for transporting every 40 tonnes of sugarcane – the average yield per acre – from their fields to distant cane-crushing units.

The protocol which should have been followed to close the factory, according to the Andhra Pradesh Industrial Disputes Rules, 1958, was not implemented. “The factory was supposed to inform the sugarcane farmers at least two years in advance so that they could diversify [their crop] instead of sowing sugarcane in the following agricultural seasons. Without doing this, how can the management close the factory all of a sudden?” asks Kesava Rao, who played a central role in the movement started in 1972 that convinced the state government to open the cooperative sugar mill in the area in 1983.

“With this mill  closed, we will have to bear the extra transport costs. We should have our own mill. We led the movement for starting the mill, which developed the economy around Hanuman Junction,” says Pamarthi Venkata Reddiah, 59, from a nearby village. Like him, around 2,500 sugarcane farmers from the surrounding six mandals – Bapulapadu, Unguturu, Gannavaram, Nuzvid, Musunuru and Vissannapet – relied on Delta Sugars for their livelihood. 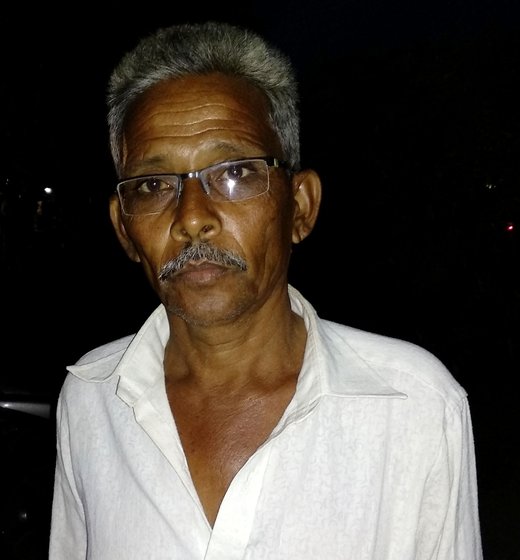 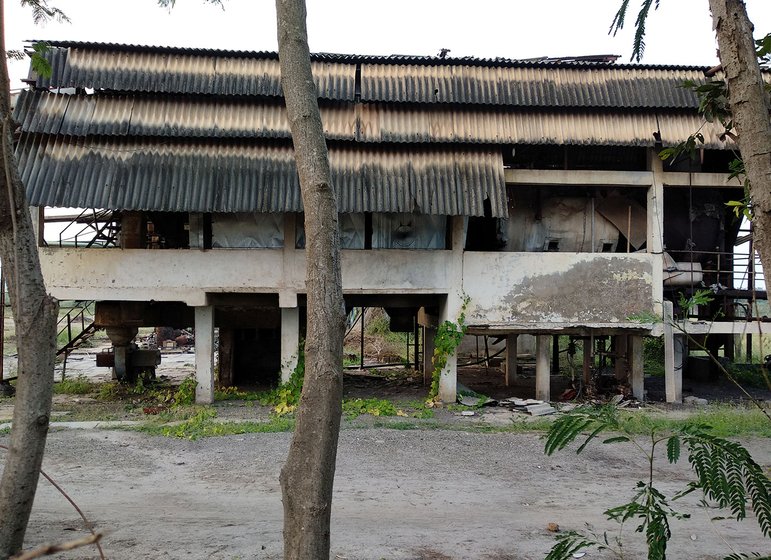 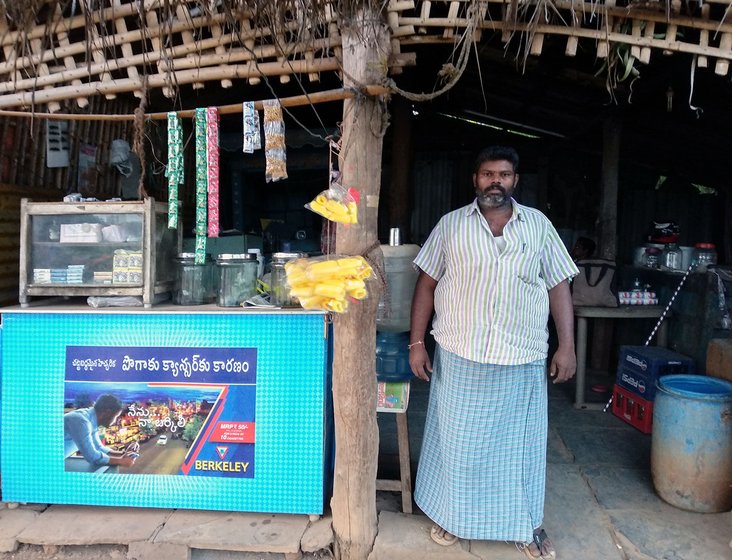 Pamarthi Venkata Reddiah (left) and around 2,500 other farmers relied on Delta Sugars to sell their sugarcane. The nearby Delta Agro Chemicals (centre) also shut shop a decade ago, and Chodagiri Reddy (right), who lost his job then, runs a paan and tea shop next to the defunct factory

“Our cows and buffaloes in the surrounding villages also depend on the dry waste left after the sugarcane crushing. This will be a serious problem for the people involved in cattle rearing in the vicinity,” says Alla Gopala Krishna Rao, 58, from the Yadava caste, who rears cattle for milk along with cultivating sugarcane on three acres of land. Most of the people who rear cattle and sell milk, or who worked at the mill, are from backward castes like the Yadavas, or from Dalit sub-castes like the Malas.

Right opposite the now-closed Delta Sugars is the defunct Delta Agro Chemicals factory (for a while owned by the same company). In 2007, it too shut shop when the owner did not repay a bank loan and the bank seized the property. “Around 200 workers lost their livelihood. Most of them are now working as auto drivers or agricultural labourers [in the Hanuman Junction area],” says Srinivasa Rao, the security guard at the deserted factory.

Chodagiri Reddy Gopala Rao, 36, once an electrical operator at the defunct agro-chemicals factory, now has a small paan and tea shop right next to it.  “I hardly earn 5,000 rupees [a month] now. It is difficult to make ends meet. I used to earn 10,000 rupees back in 2007, when I worked in the factory,” he says.

And left with no job at age of 54 after working for over 30 years at Delta Sugars, Nagaraju too is now plying an autorickshaw.  He and other former Delta Sugars workers expect the owner will eventually use the mill land for other purposes like housing projects and office complexes, given the location’s proximity to the new capital city of Amaravati and to Vijayawada, and the consequent boom in land prices in the area.