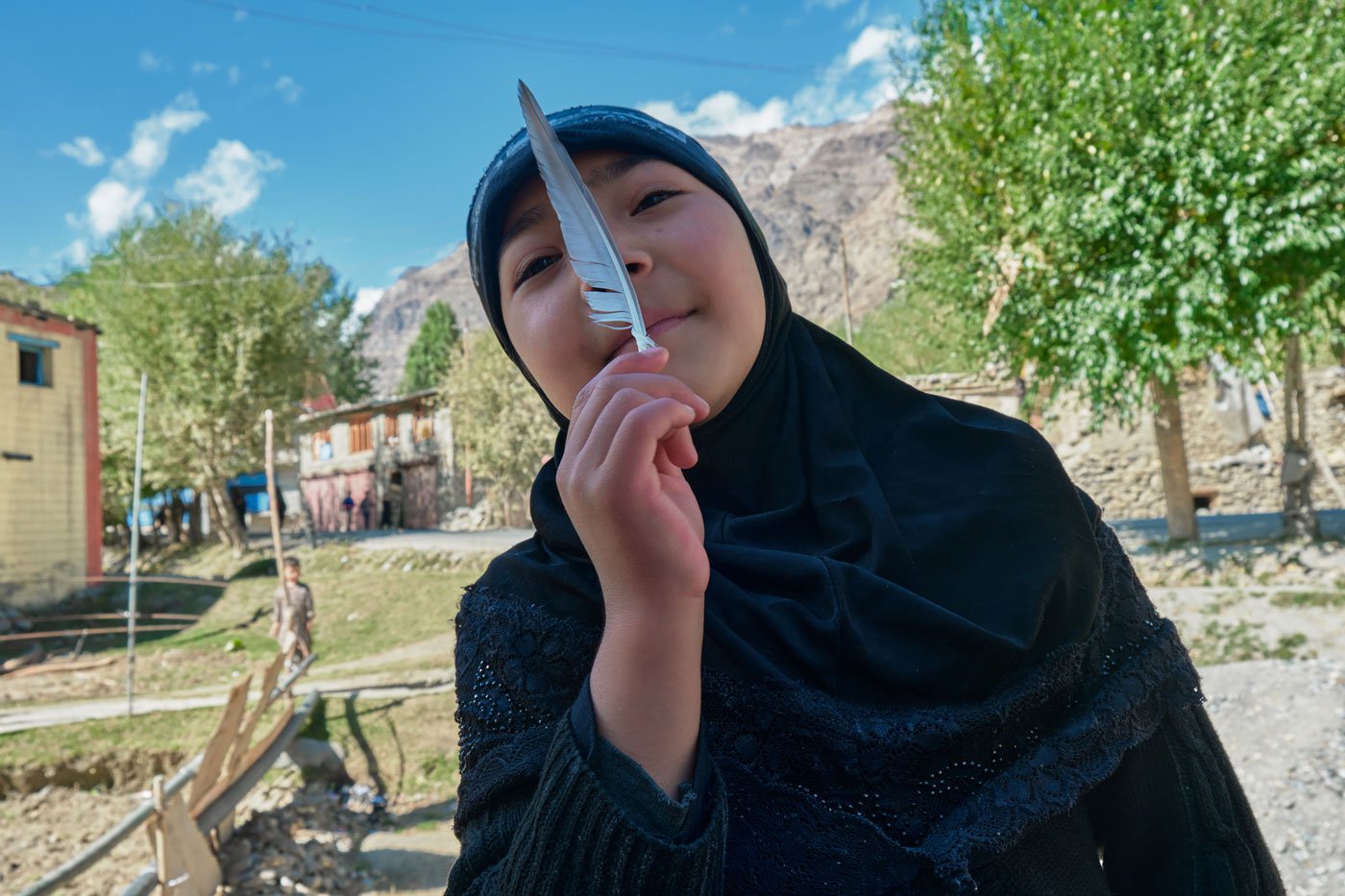 The rituals of Muharram observed by Shia Muslims go on for days in Tai Suru village of Ladakh’s Kargil district. For the children, especially girls, it is a chance to meet friends and spend long hours together

The villages of Ladakh’s Suru valley come alive during the summer months. Streams gurgle through lush green fields, where wildflowers grow with abandon and snow-capped mountains surround. The day sky is a beautiful blue, and you can spot the milky way in the night sky.

Children in this valley, in Kargil district, share a sensorial relationship with their environment. In Tai Suru village, where these photos were taken in 2021, the girls climb rocks, collect flowers in summer, or snow in winter, and jump in the streams. Playing in the barley fields is a favourite summertime activity.

Kargil is remote, and far removed from the popular tourist destination of Leh, the only other district of the union territory of Ladakh.

Elsewhere, many people confuse Kargil to be in Kashmir valley, but it is crucially not. And unlike in Kashmir where Sunni Muslims are predominant, the faith of the majority of Kargil’s people is Shia Islam.

Shia Muslims in Suru valley regard Tai Suru, which is 70 kilometres south of Kargil town, as an important religious centre. For the people here, the first month of the Islamic new year – Muharram – is a period of intense mourning for Imam Hussain, the grandson of Prophet Mohammad. He was killed along with 72 of his companions in the Battle of Karbala (in modern-day Iraq) on October 10, 680 CE.

Both men and women take part in the rituals commemorating the event during Muharram. Processions, called juloos or dasta , are taken out on several days. The largest of these happens on Ashura – the tenth day of Muharram – when Hussain and his entourage were massacred in Karbala. Some men practice the ritual of self-flagellation ( qama zani ) with chains and blades, and everyone beats their chests ( seena zani ). 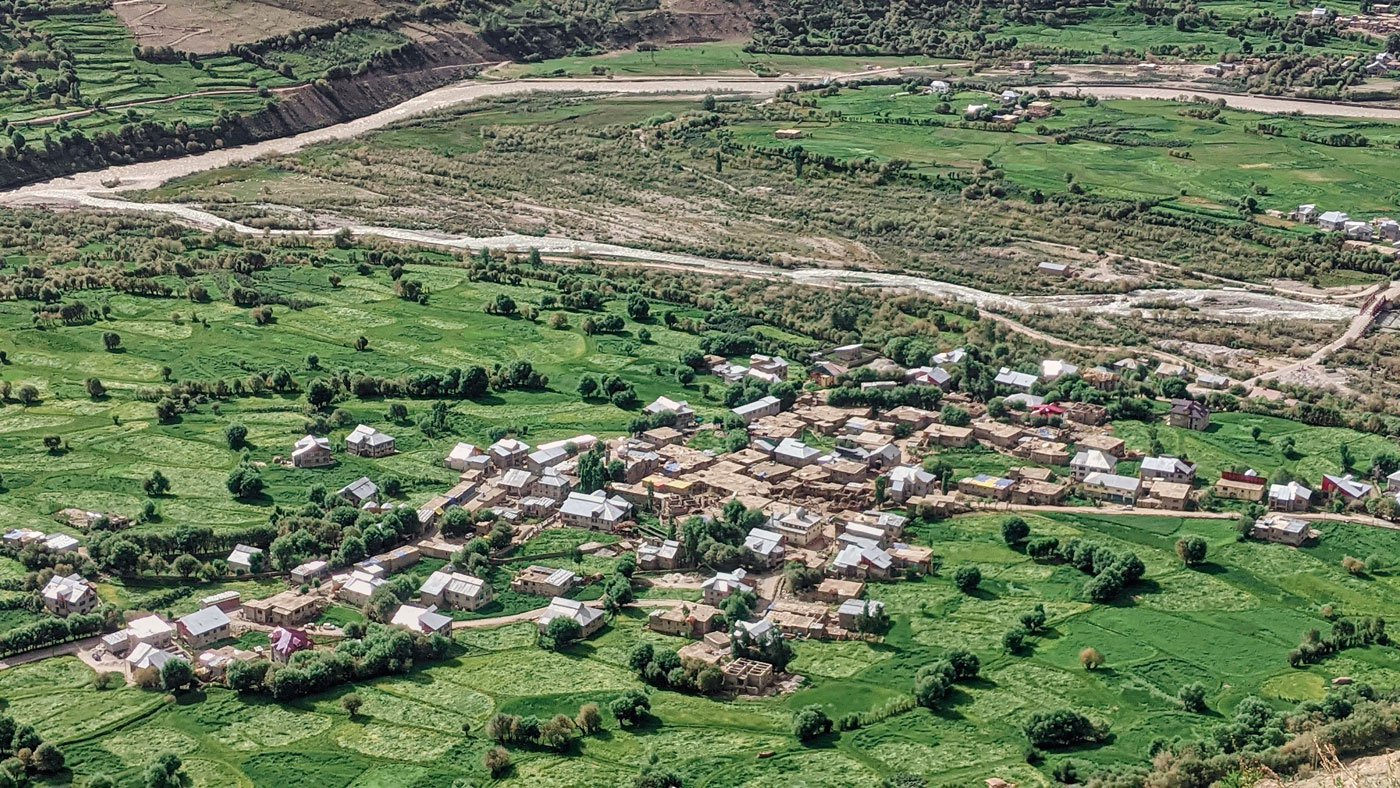 The village of Tai Suru, 70 kilometres south of Kargil town in Suru valley, is home to about 600 people. It serves as the headquarters of Kargil district’s Taifsuru tehsil

On the night before Ashura, women take out a procession from the masjid to the imambara (congregation hall), chanting marsiya and noha (lamentations and elegies) all the way. (Ashura falls on August 8-9 this year.)

Everyone gathers for majlis (religious gathering), held twice a day in the imambara during Muharram, to remember the resistance and sacrifice of Hussain and the others. Sitting in separate spaces in the hall, men (and boys) and women listen to the agha (religious head) narrate episodes from the Karbala battle and related events.

But on the floor above the hall is a meshed balcony that the girls occupy. The space offers them a vantage view of the goings-on below. Called ‘ pinjra ’, or cage, the word evokes confinement and a sense of suffocation. For the girls, however, the space gives them room for freedom and play.

During a point when the grieving becomes more pronounced in the imambara, the mood suddenly shifts and the girls put their heads down and weep as well – but not for long.

Though Muharram is a month of mourning, in the children’s world it is their chance to meet their friends and spend hours together, even late into the night. While some boys self-flagellate, the ritual is forbidden for girls. The girls largely bear witness to what everyone else does.

Often, descriptions of Muharram observances focus on the self-flagellation and blood shed by men. But there is also another way of grieving, the women’s way – solemn and sorrowful. 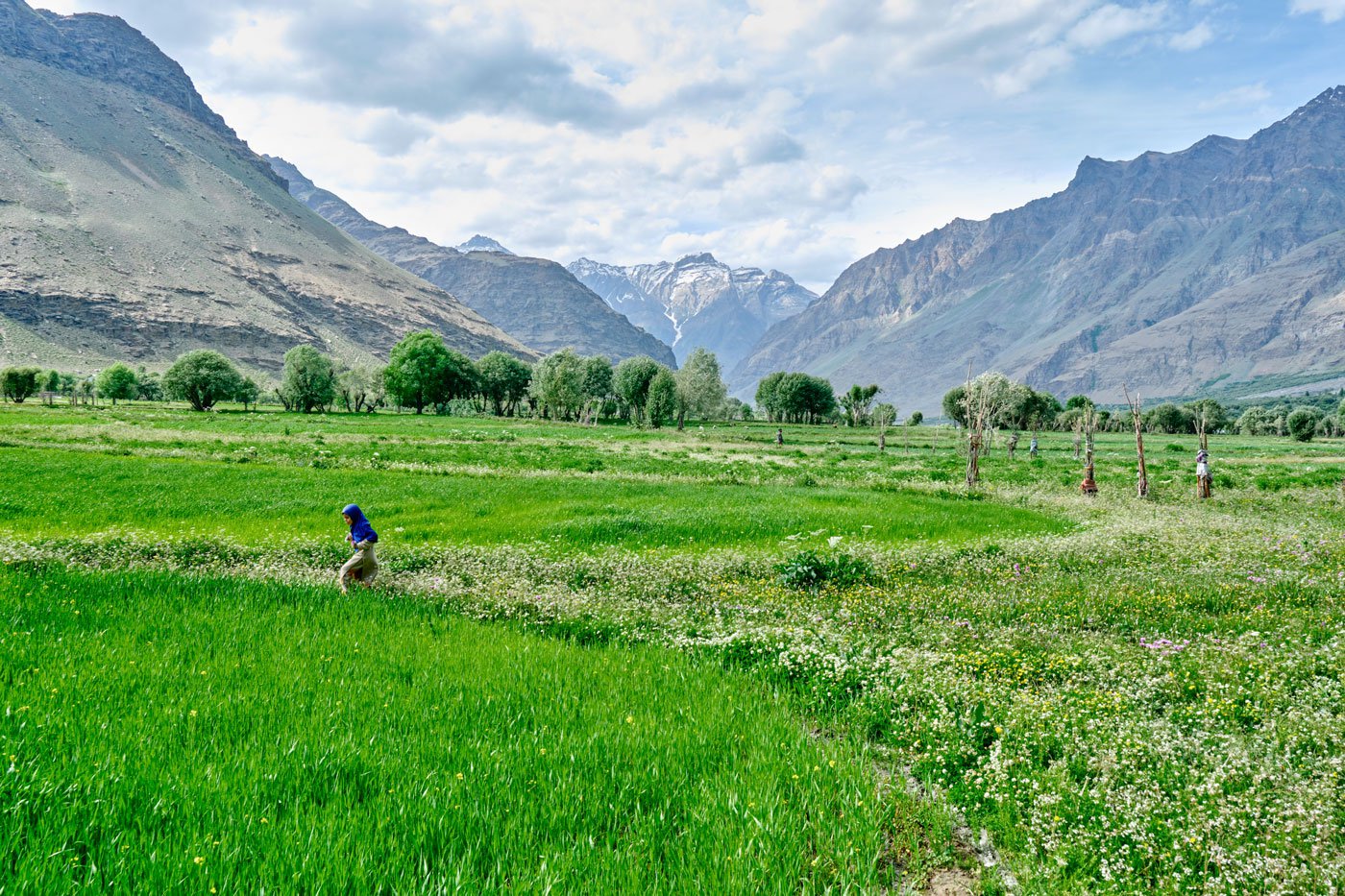 Jannat playing in the barley fields, a favourite summertime activity of children in Tai Suru 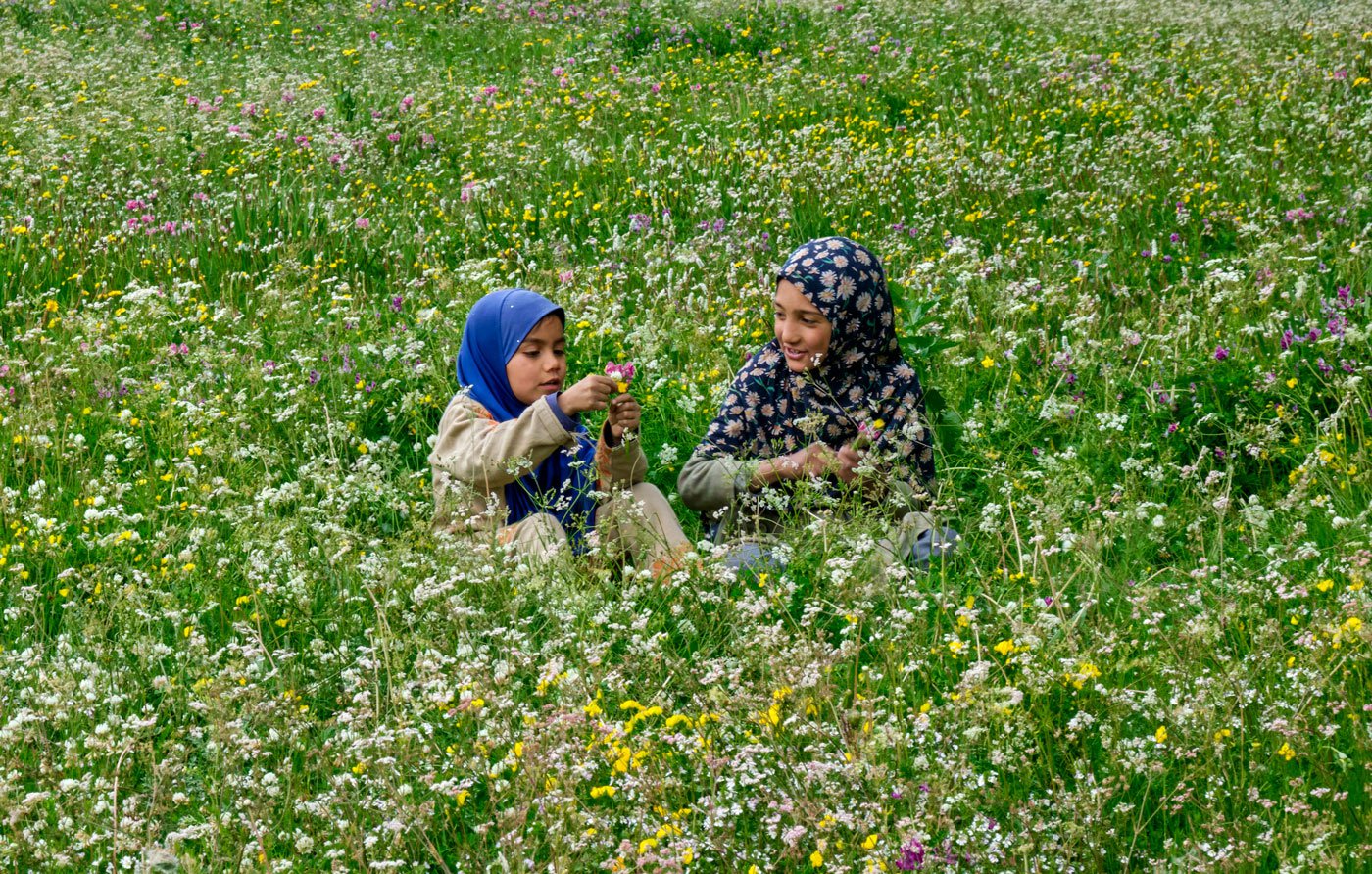 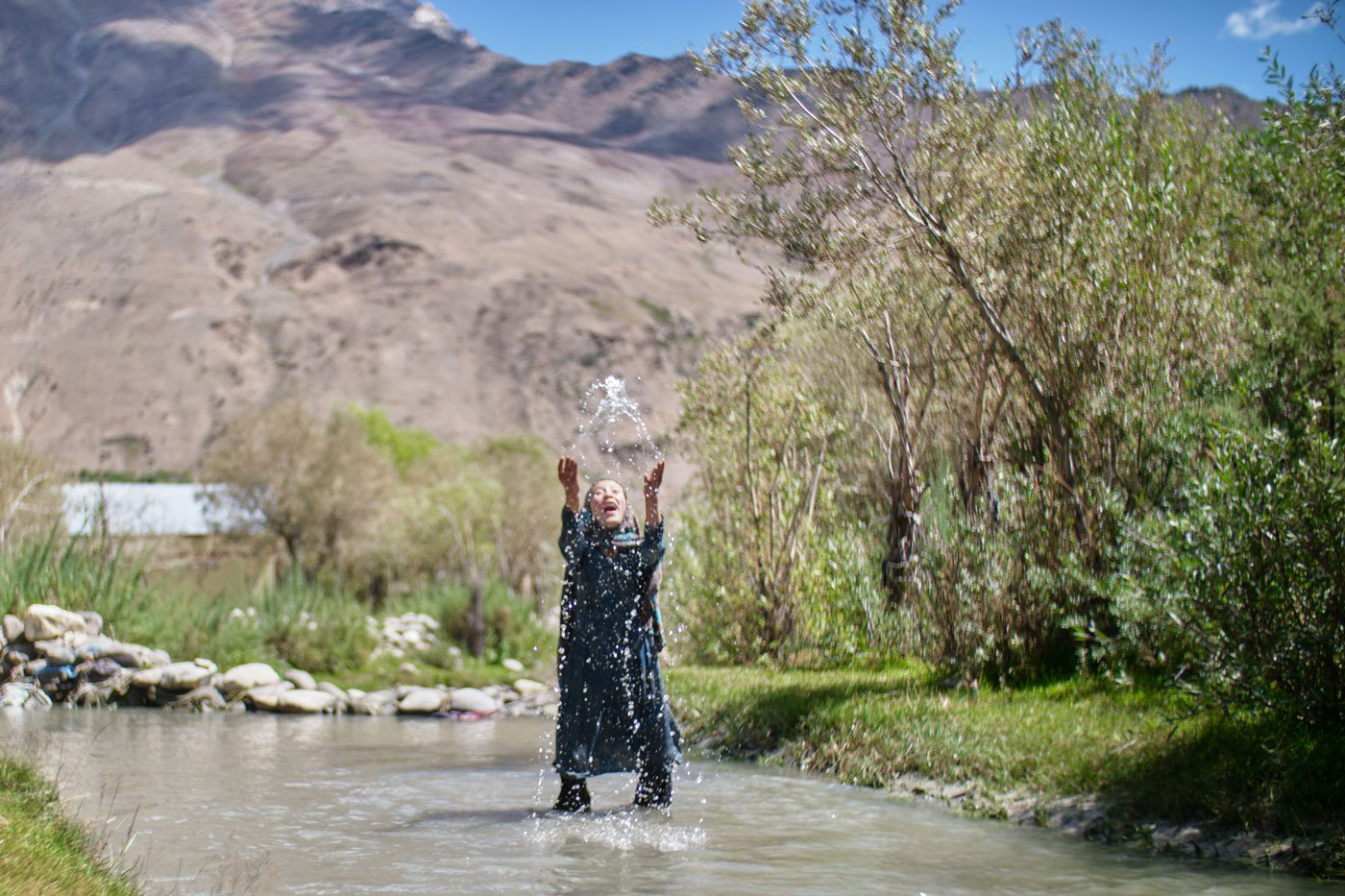 Mornings are spent in school, and evenings in play and homework. On weekends, there may be picnics. Here, Mohadissa, 11, is playing in a stream while out on a picnic 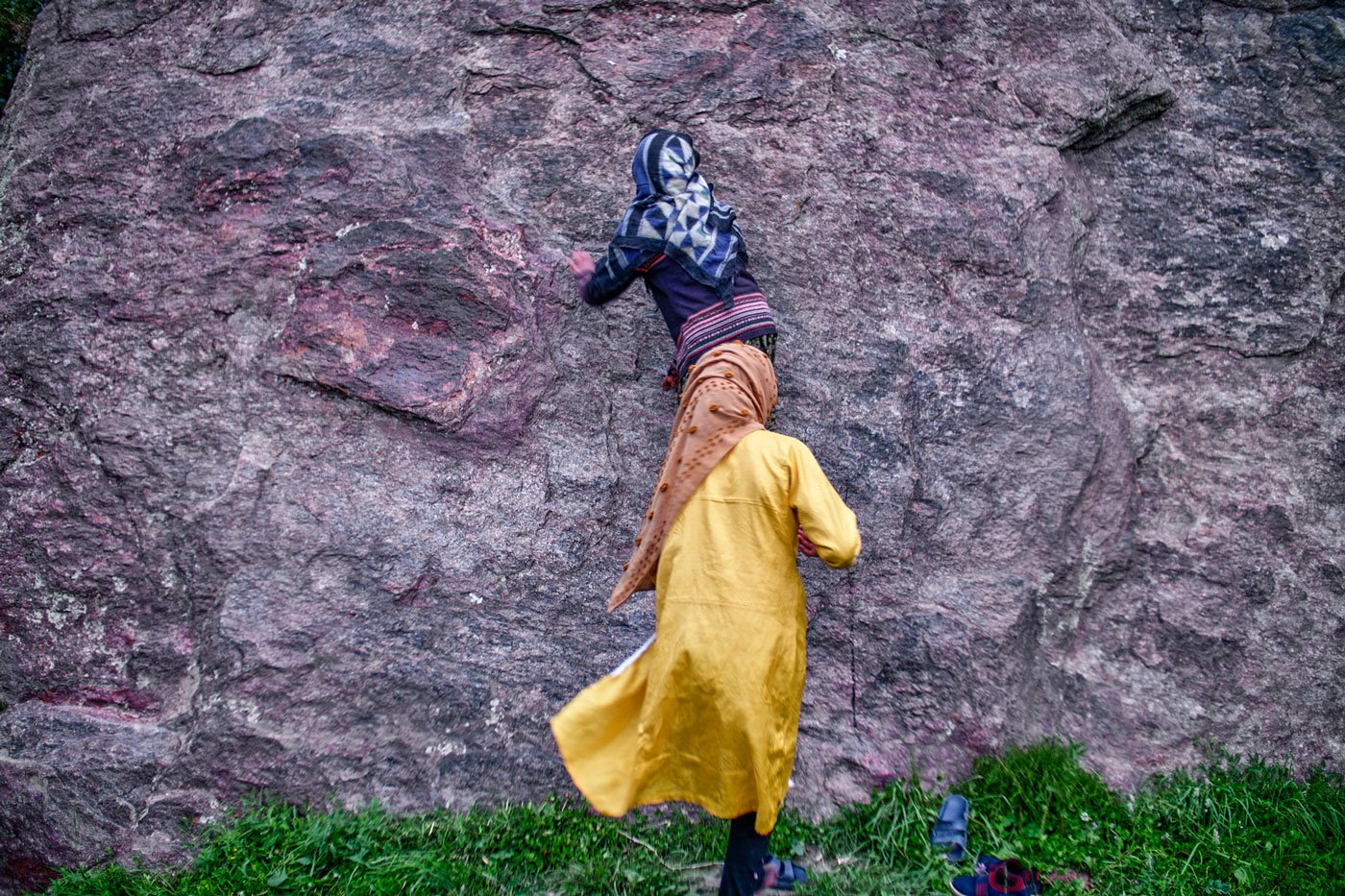 Two girls climb a rock in Tai Suru, in Ladakh's Suru valley. Children in the valley share a sensorial relationship with their environment 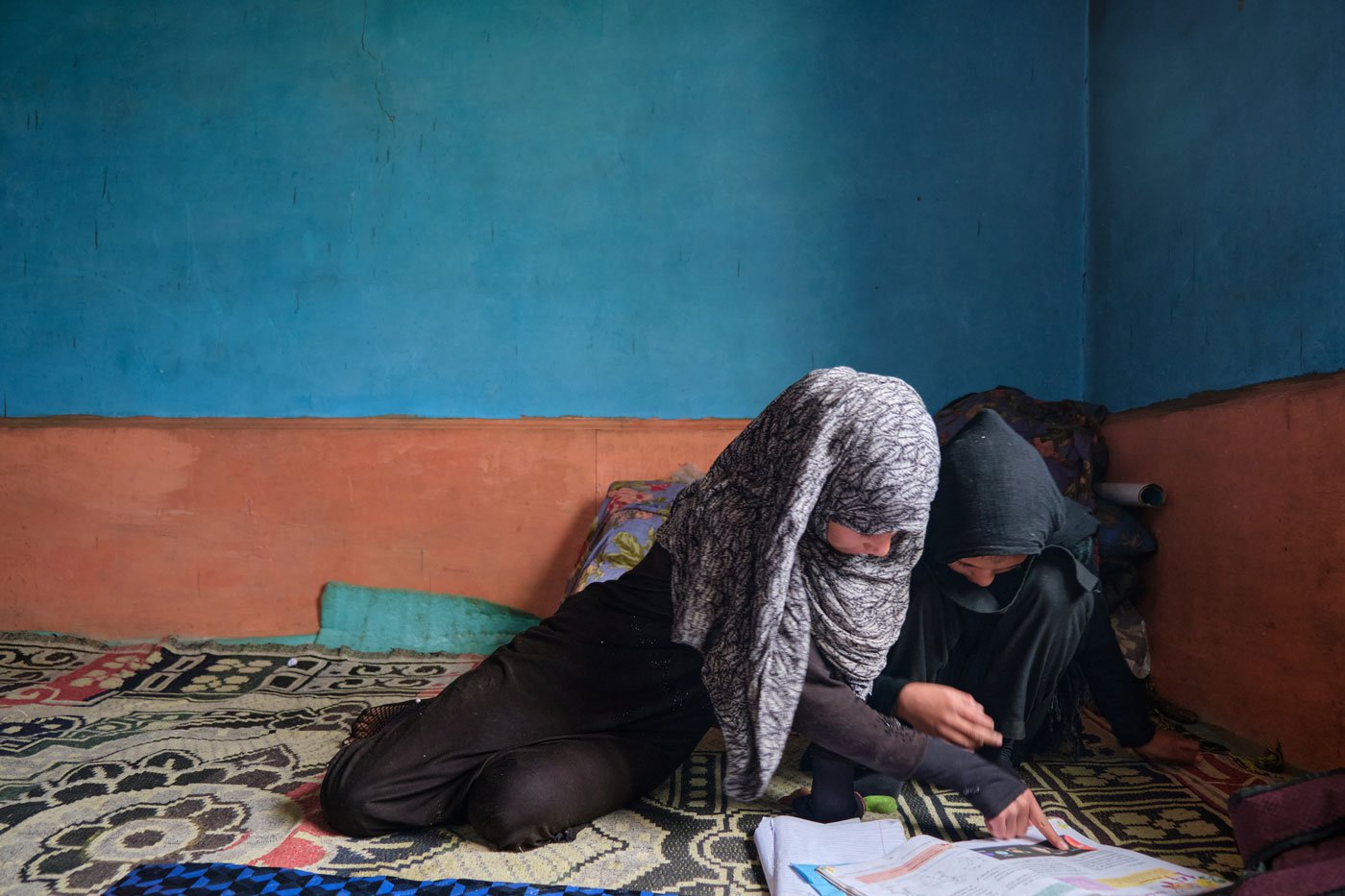 Hajira, and Zahra Batul, 10 and 11 years old, study together in Hajira’s home before leaving for the imambara during Muharram in August 2021 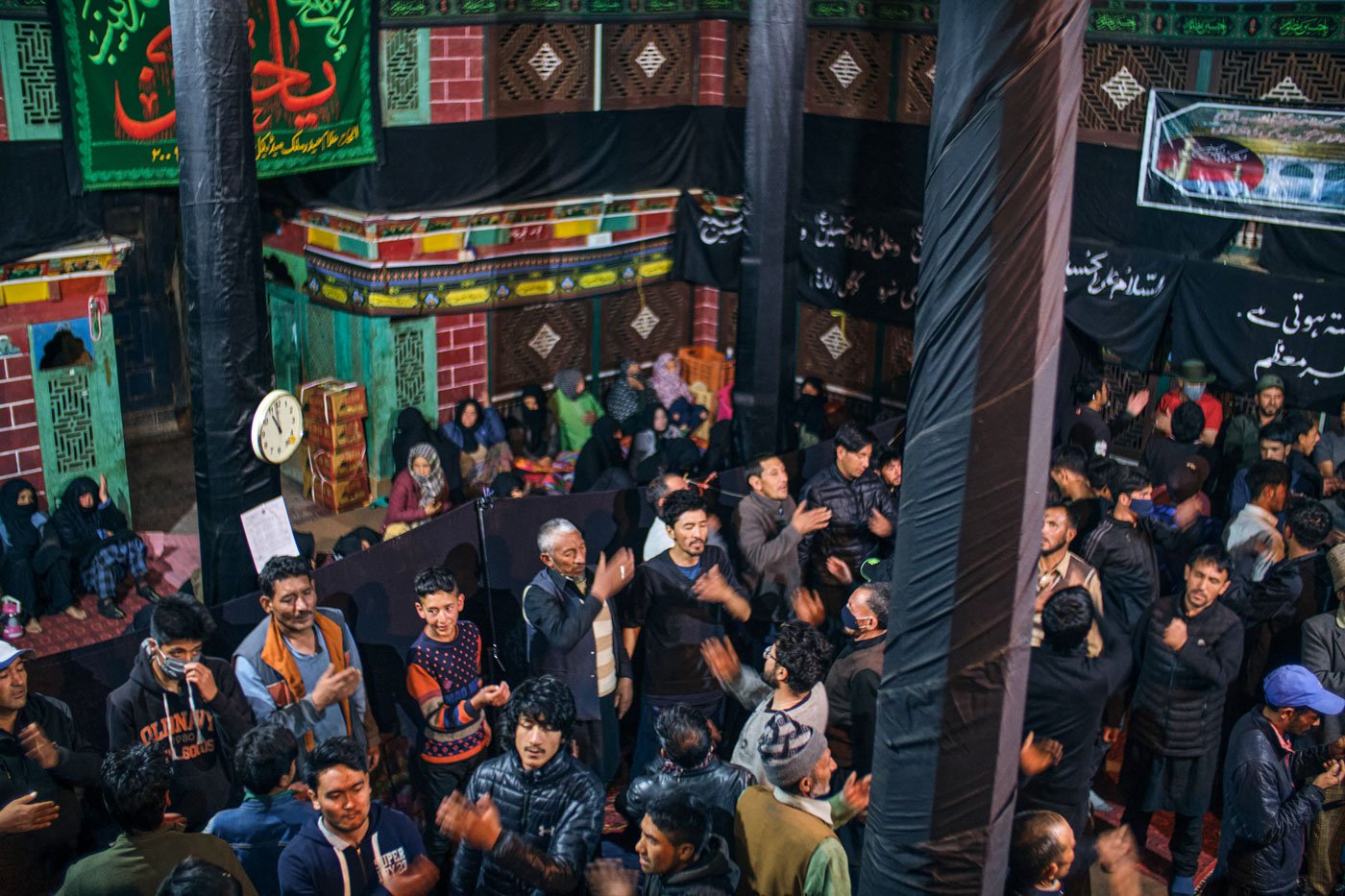 Men performing seena zani (ritual chest beating) at a gathering in the village imambara on August 16, 2021. A black cloth divides the hall into separate spaces for men and women 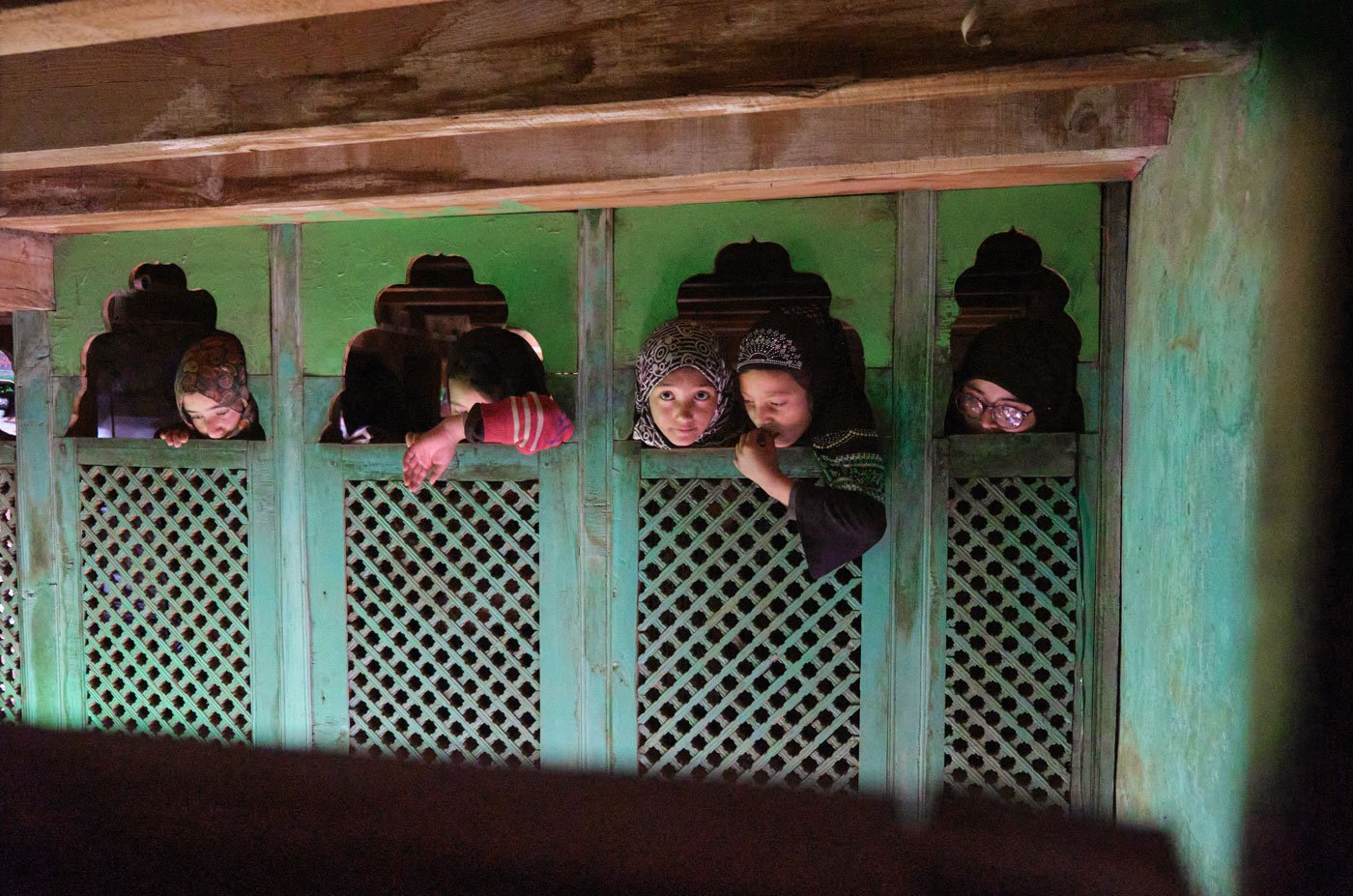 The girls peep into the hall from the pinjra , the lattice balcony of the floor above. Away from the rituals in the hall, the space gives them room for freedom and play 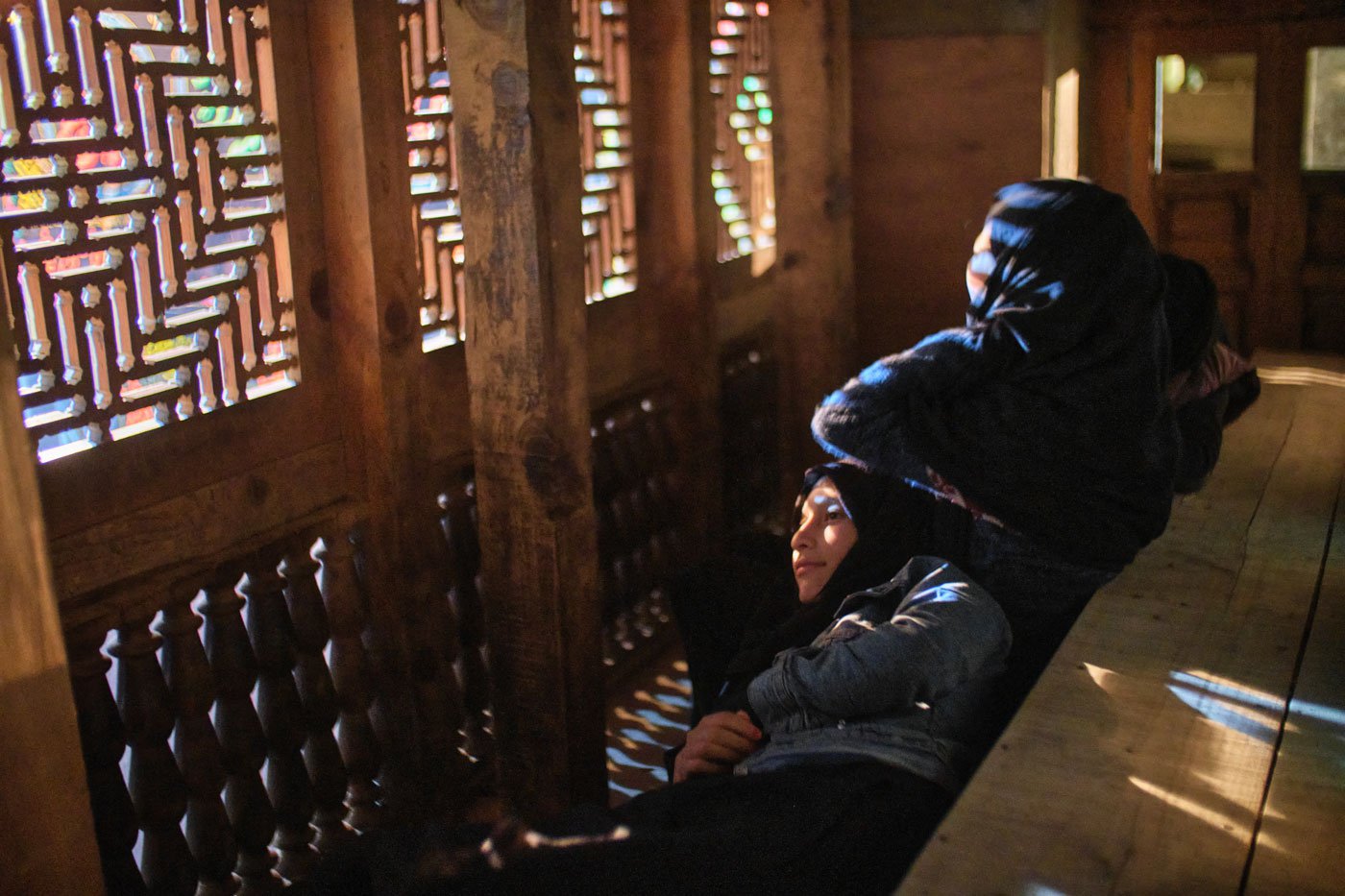 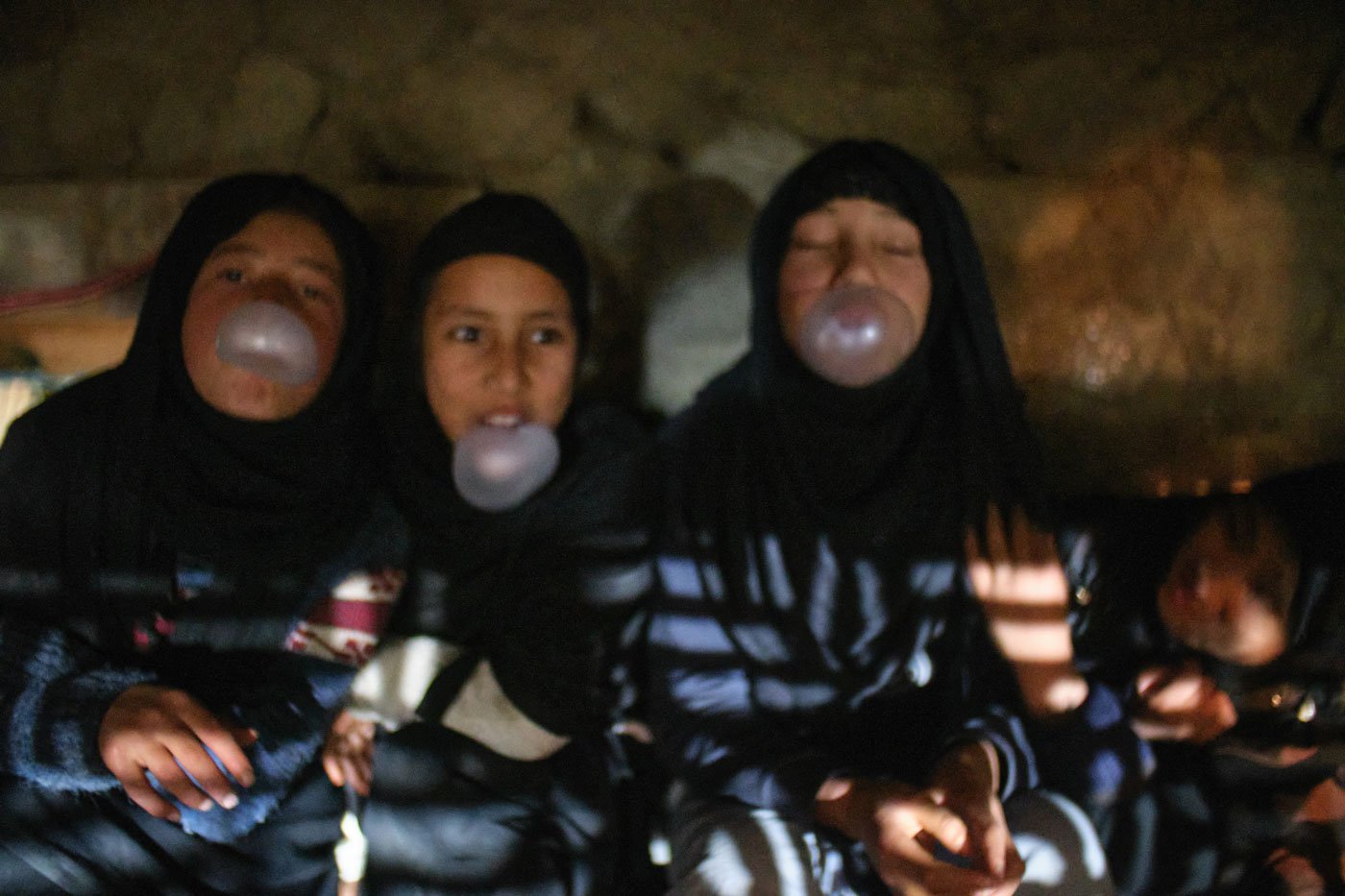 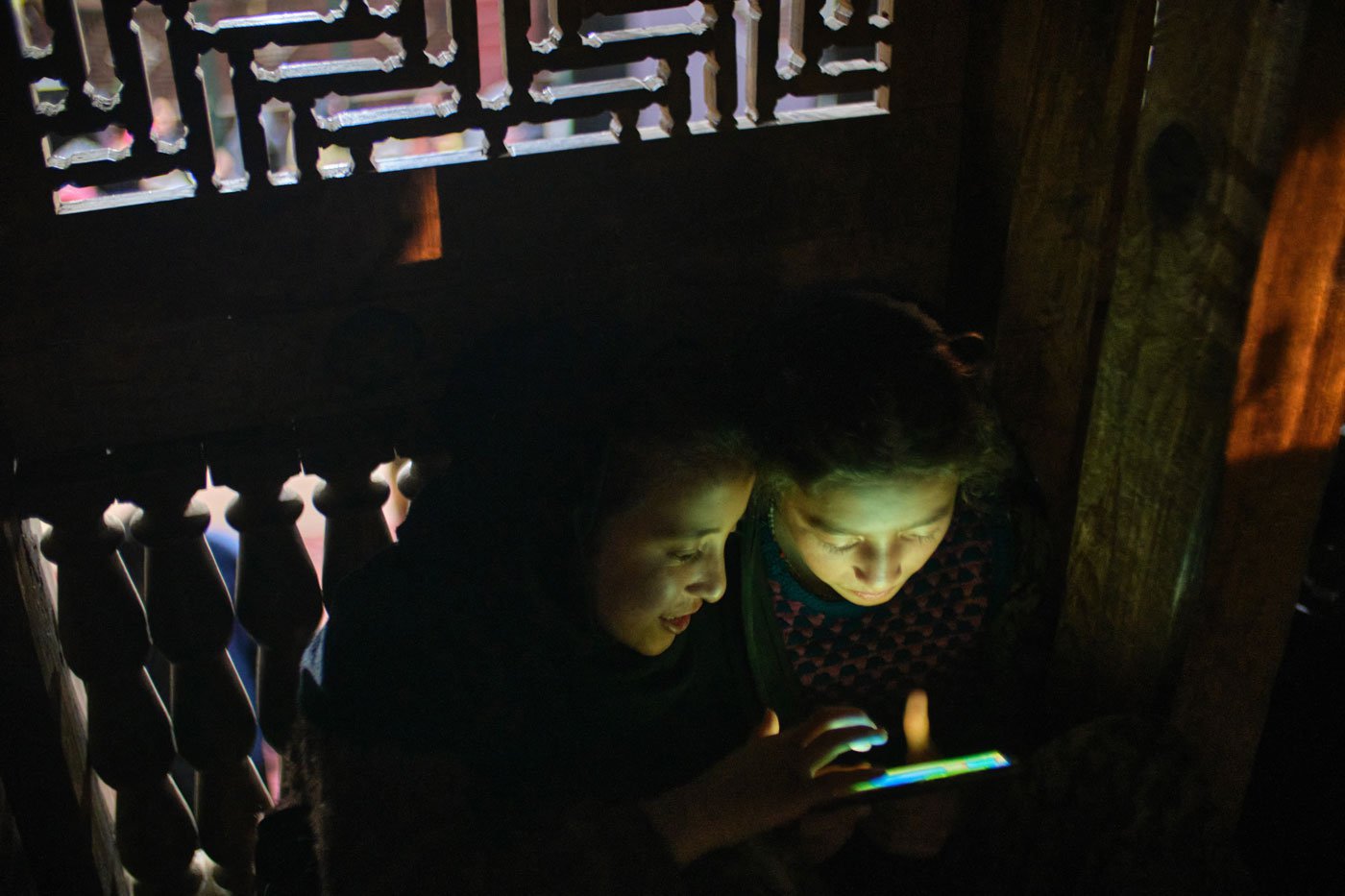 A 12-year-old and 10-year-old engrossed in a video game. The children of Tai Suru are hooked to TV and social media like children everywhere else, though the internet works only in specific spots in the village 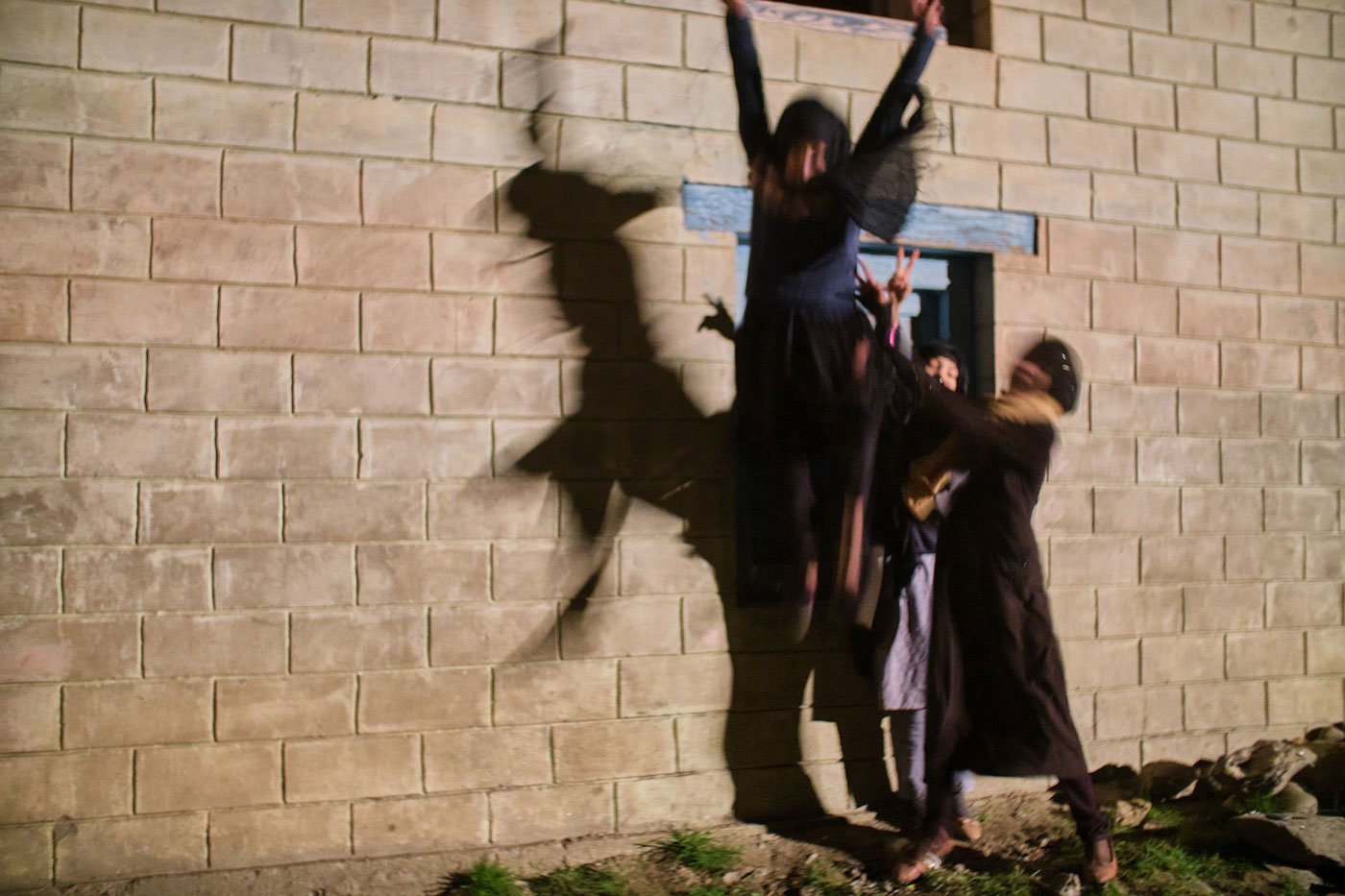 Climbing the walls of the imambara; there will be scolding if caught 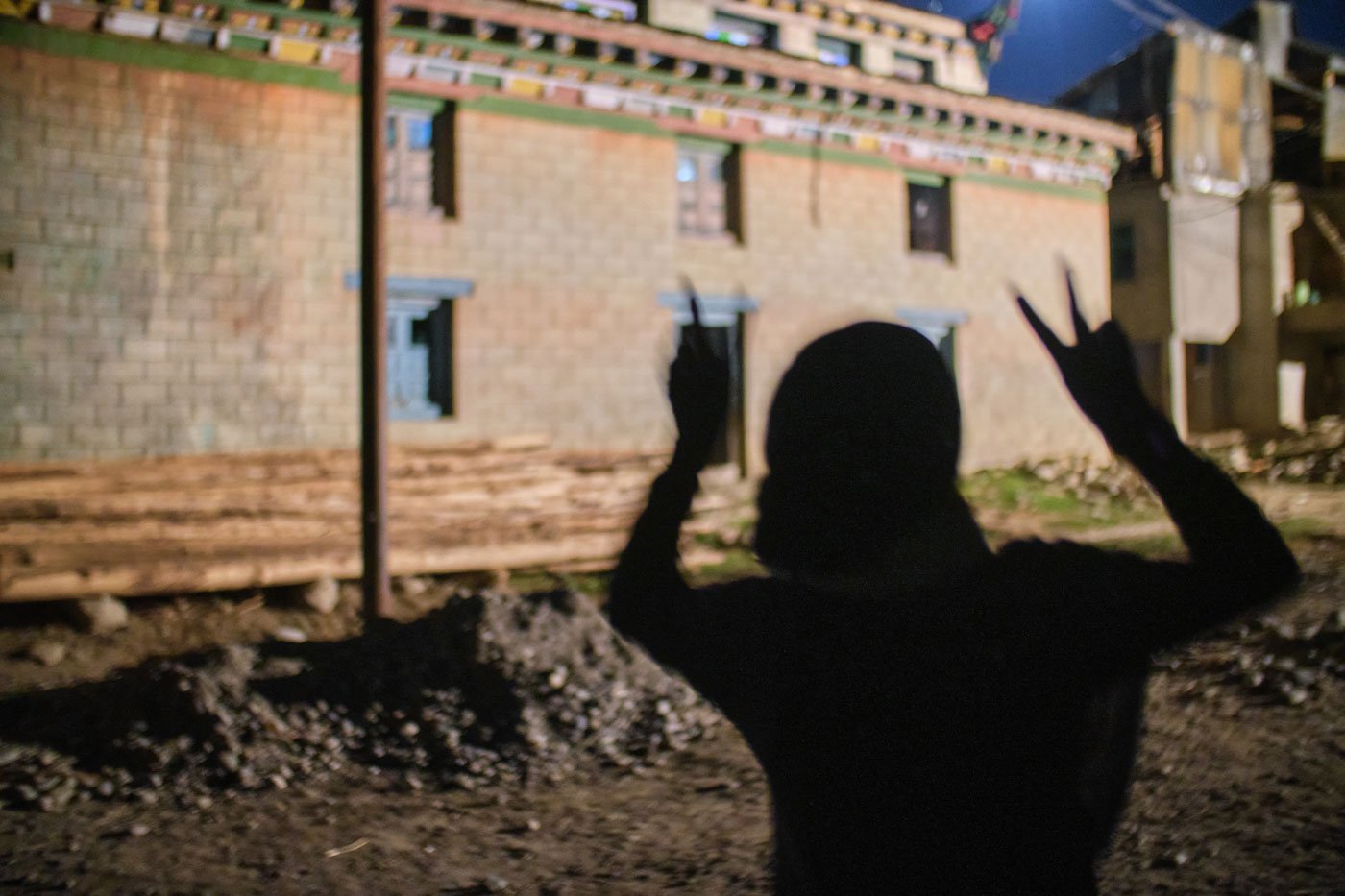 Outside the imambara, a girl makes a victory sign while playing out of adult sight 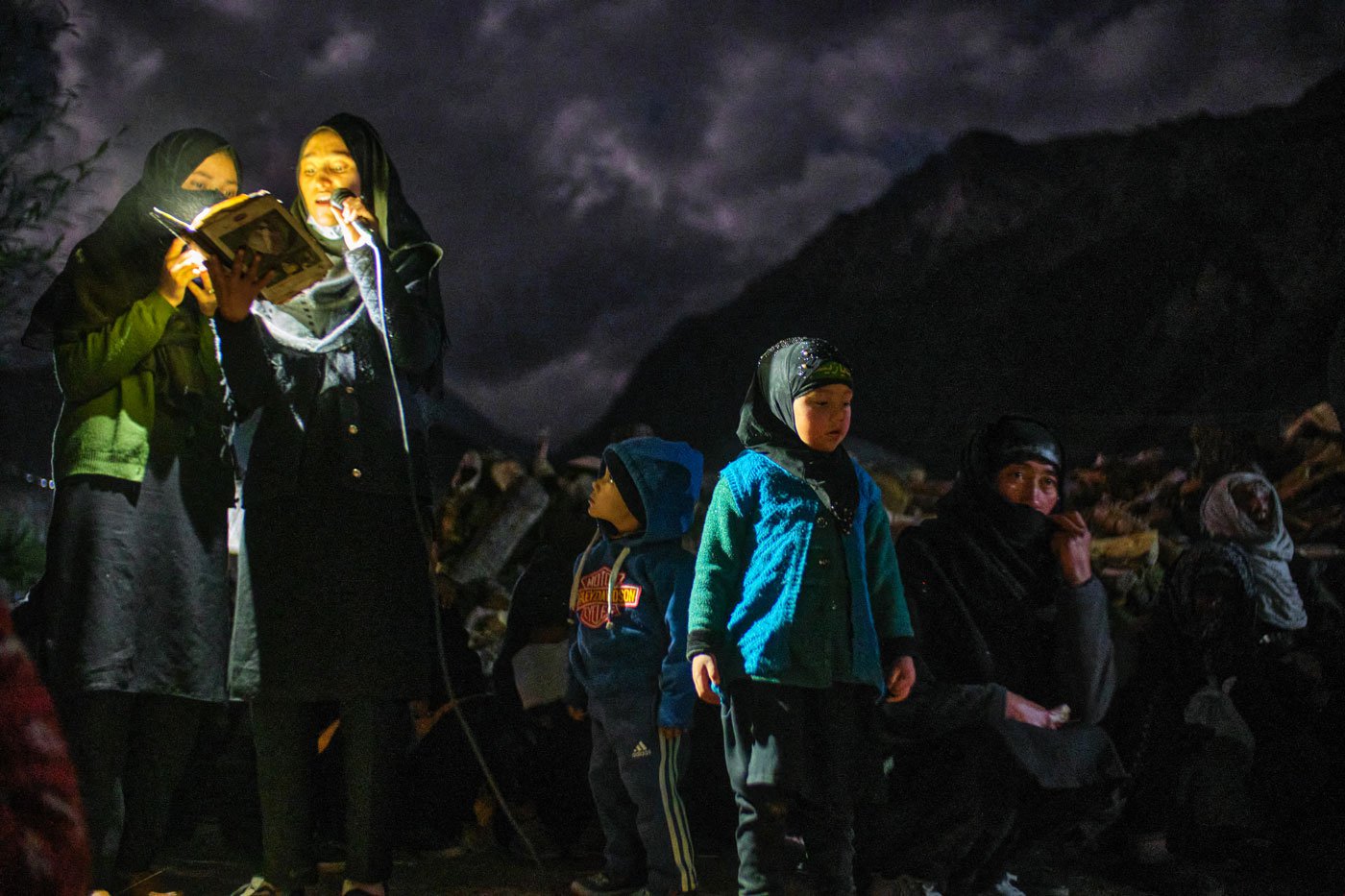 Children watch the women chant noha after taking out a procession, separate from men, on the night of Ashura. The ritual, held on the 10th day of the Islamic month of Muharram, expresses sorrow at the killing of Imam Hussain in the Battle of Karbala 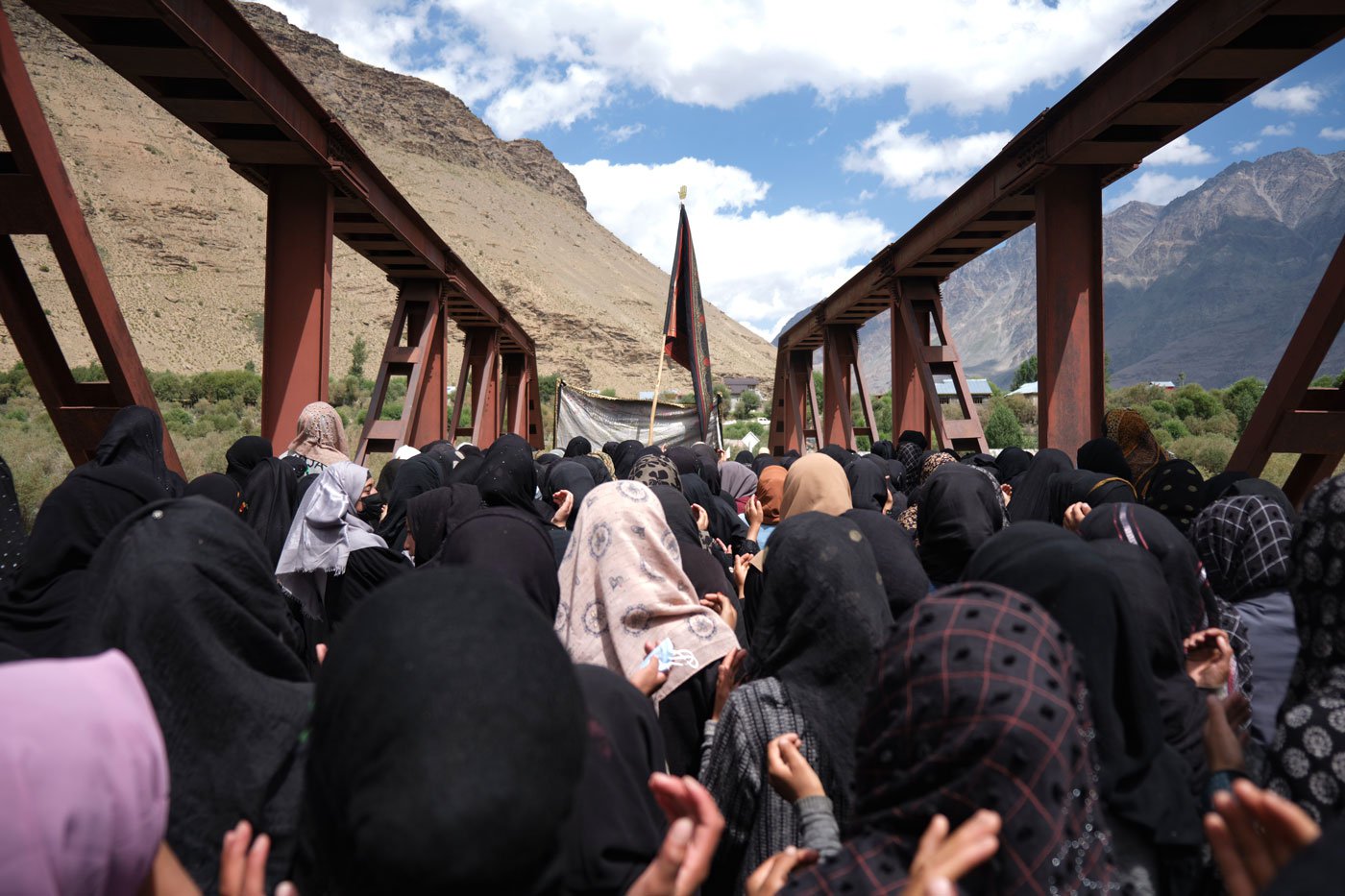 A women’s procession from Pranti village making its way towards Tai Suru on Ashura day, August 19, 2021 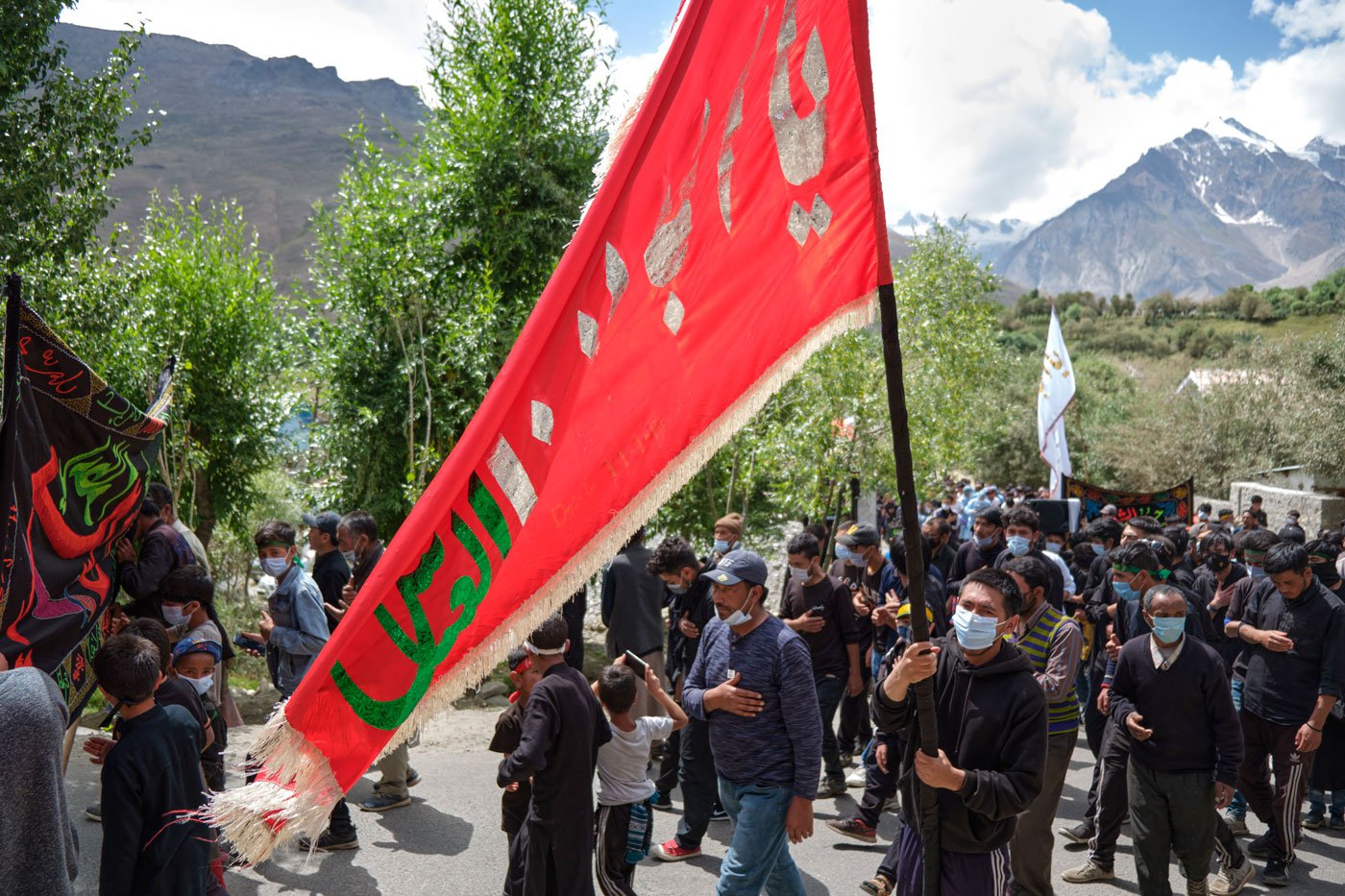 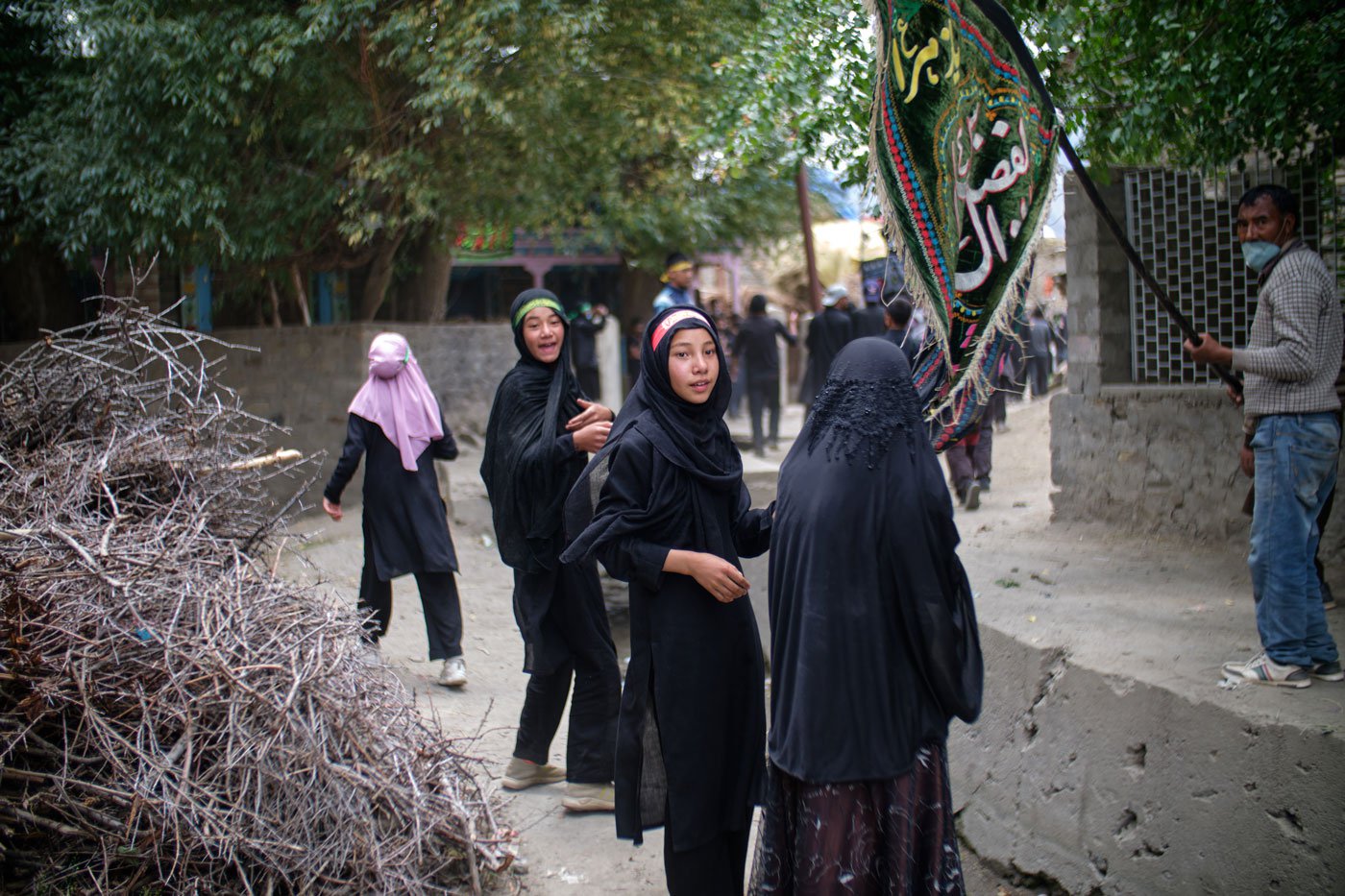 The girls try to catch up with the men’s procession 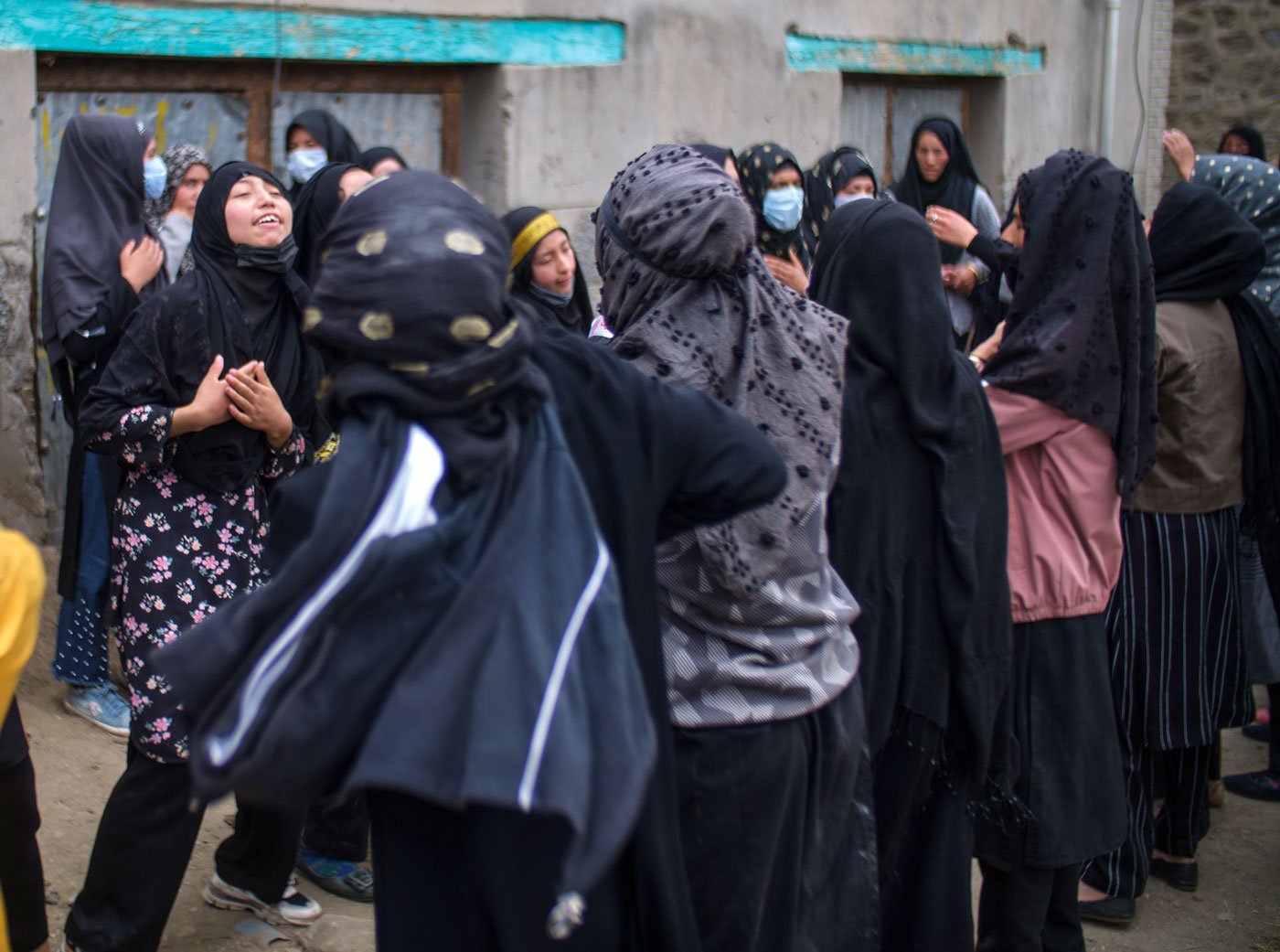 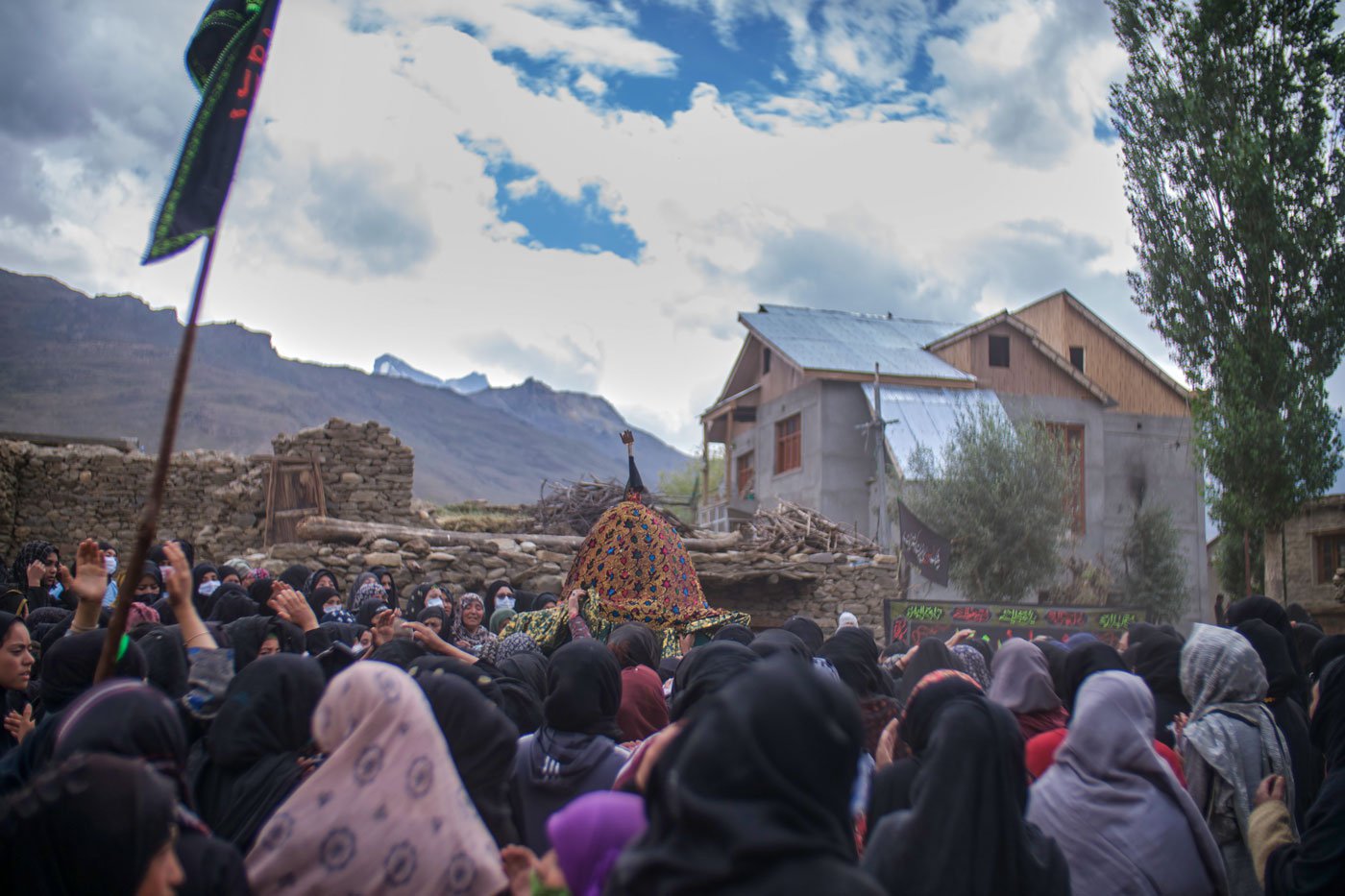 Ashura ends with the zampan –  a palanquin representing the one in which Imam Hussain’s sister Zainab had travelled to Karbala – being carried to an open ground in the village. The ground symbolises the qatl-e-gah , the battlefield where Hussain and his companions were killed for resisting the rule of Yazid, the Umayyad caliph 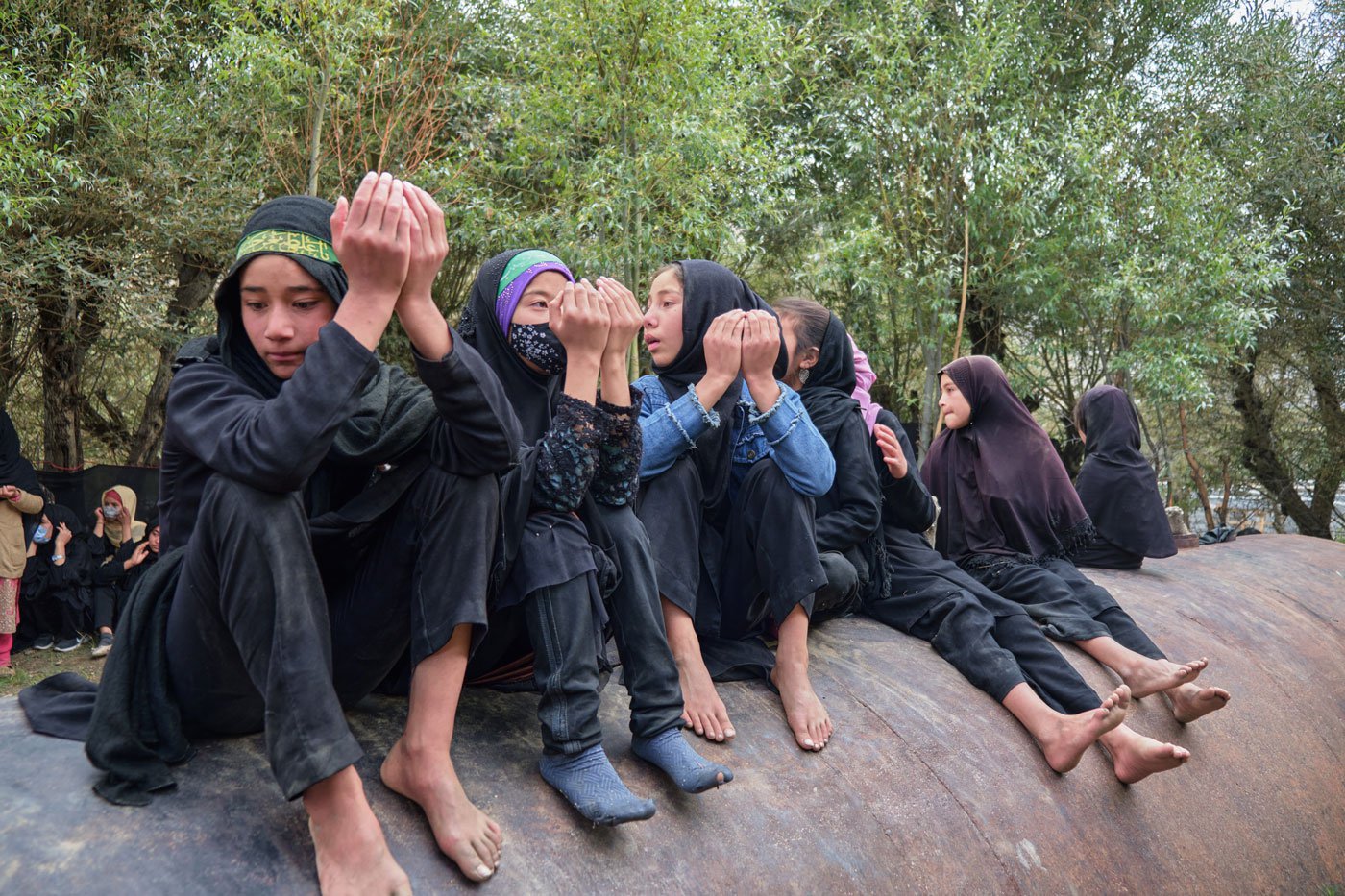 Girls praying at the qatl-e-gah 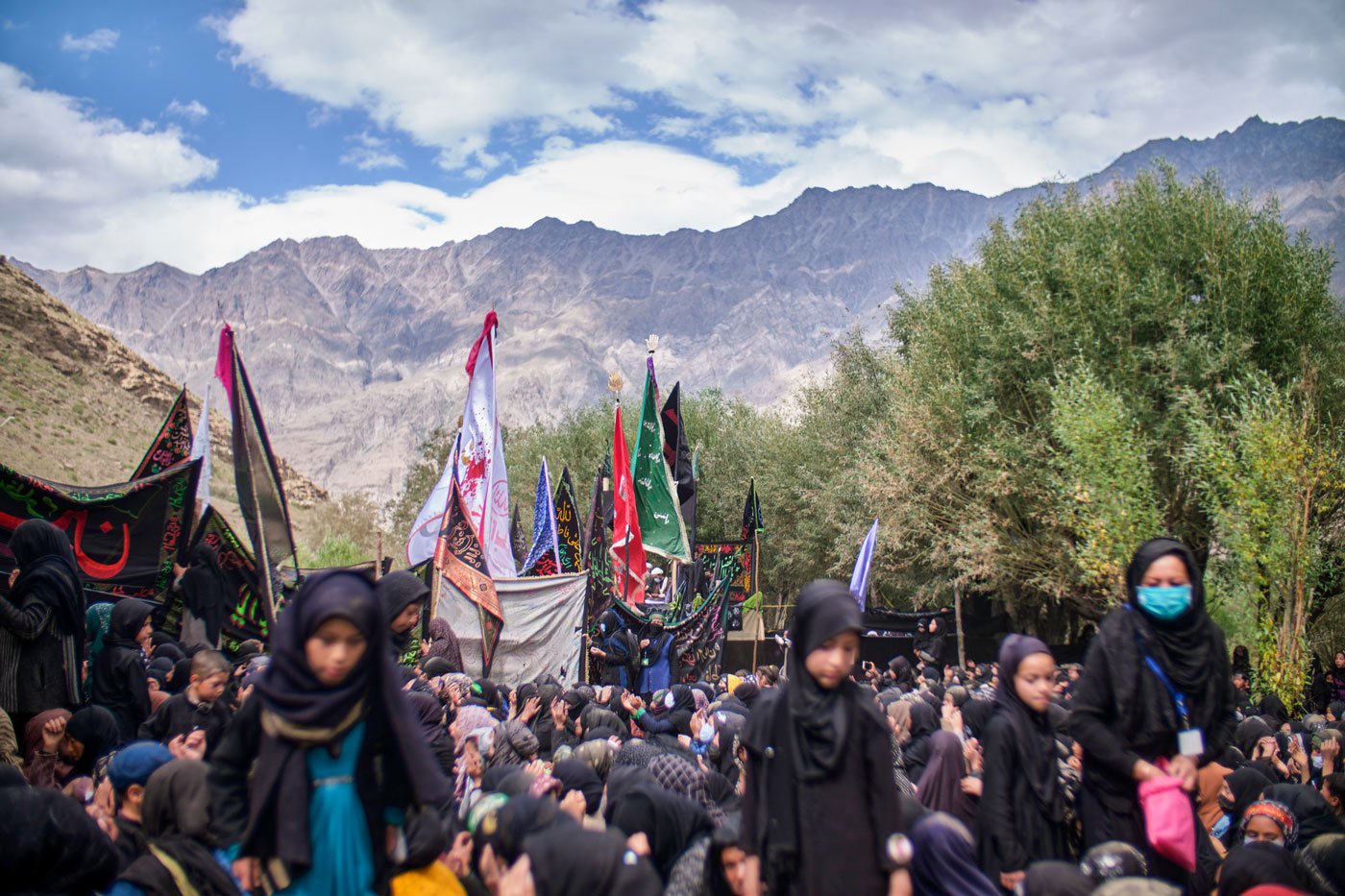 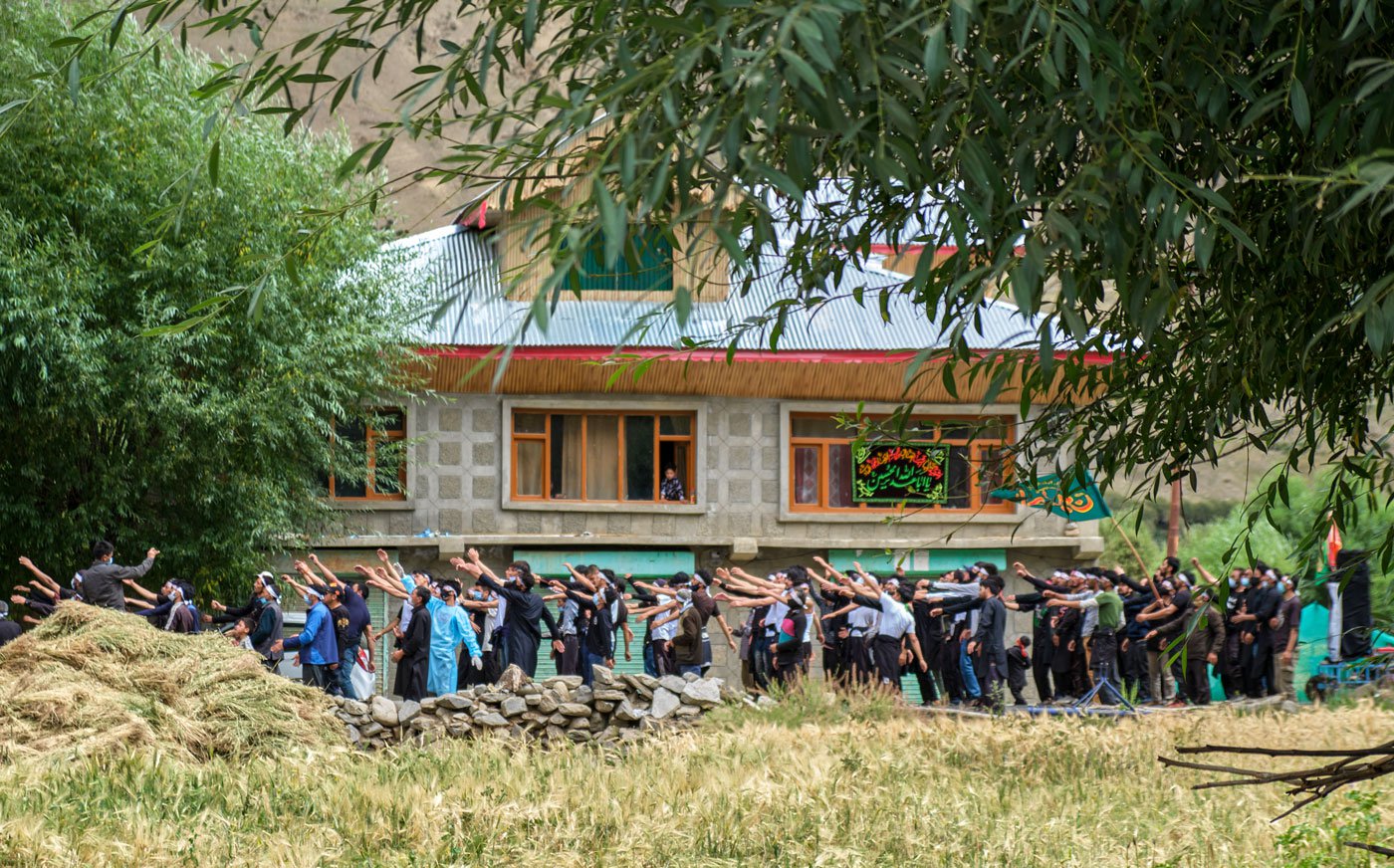 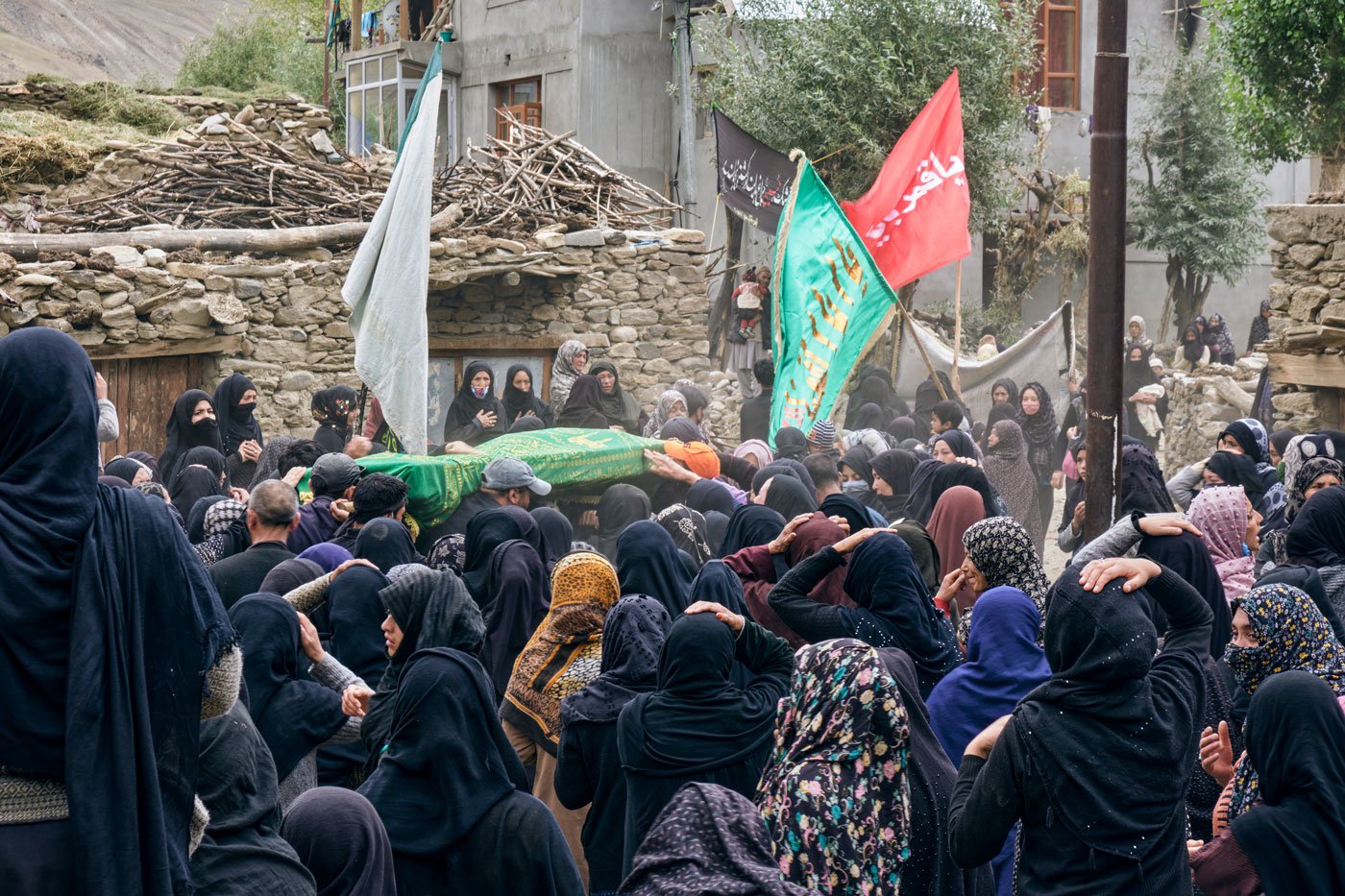 Women in Tai Suru grieve as the taboot , a replica of Imam Hussain’s coffin, is carried through the village a couple of days after Ashura 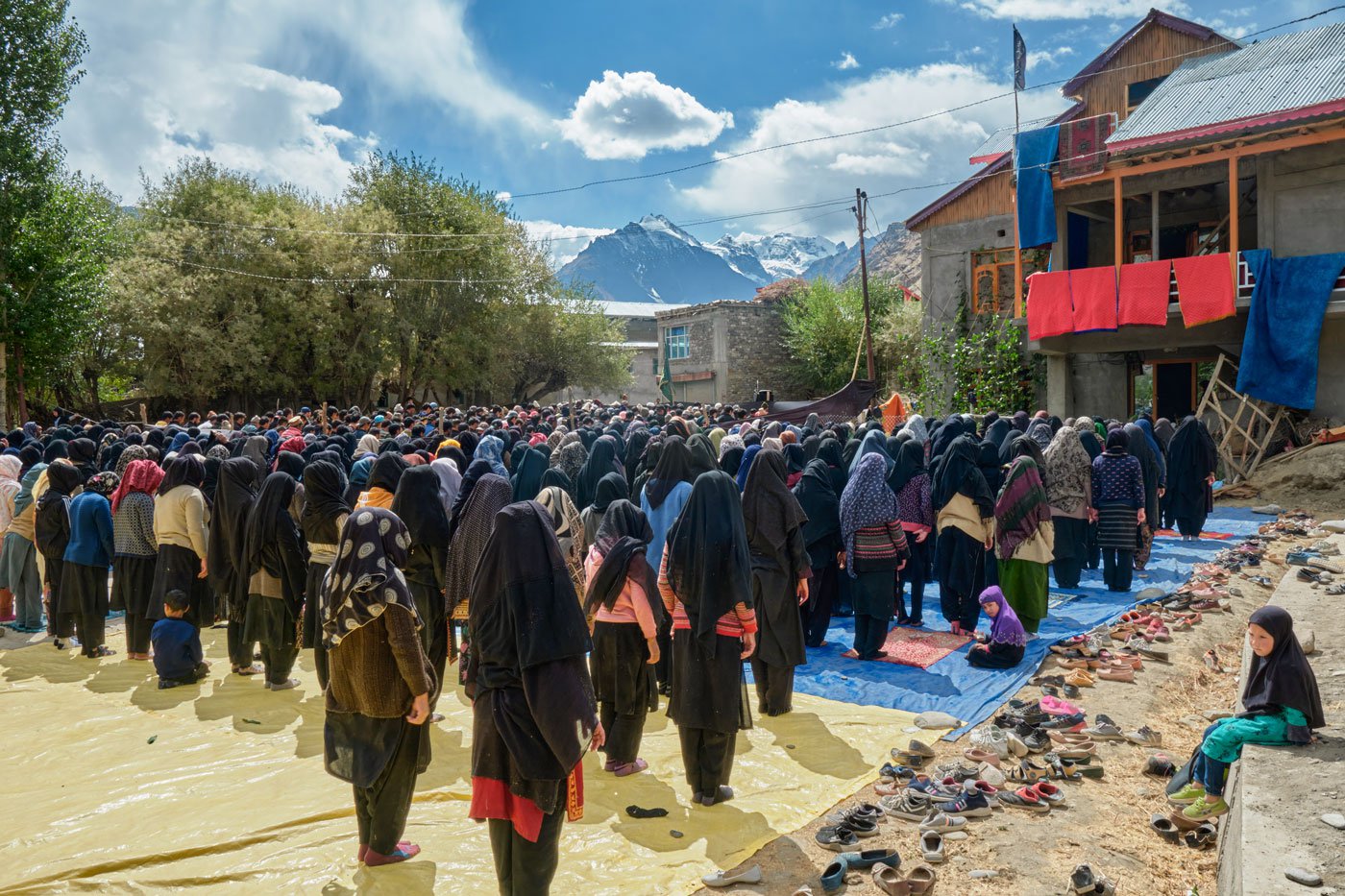 The community in Tai Suru praying together after a juloos in September 2021. The grieving for the Karbala martyrs continues until Safar, the month after Muharram

Shubhra Dixit is an independent journalist, photographer and filmmaker.

Other stories by Binaifer Bharucha