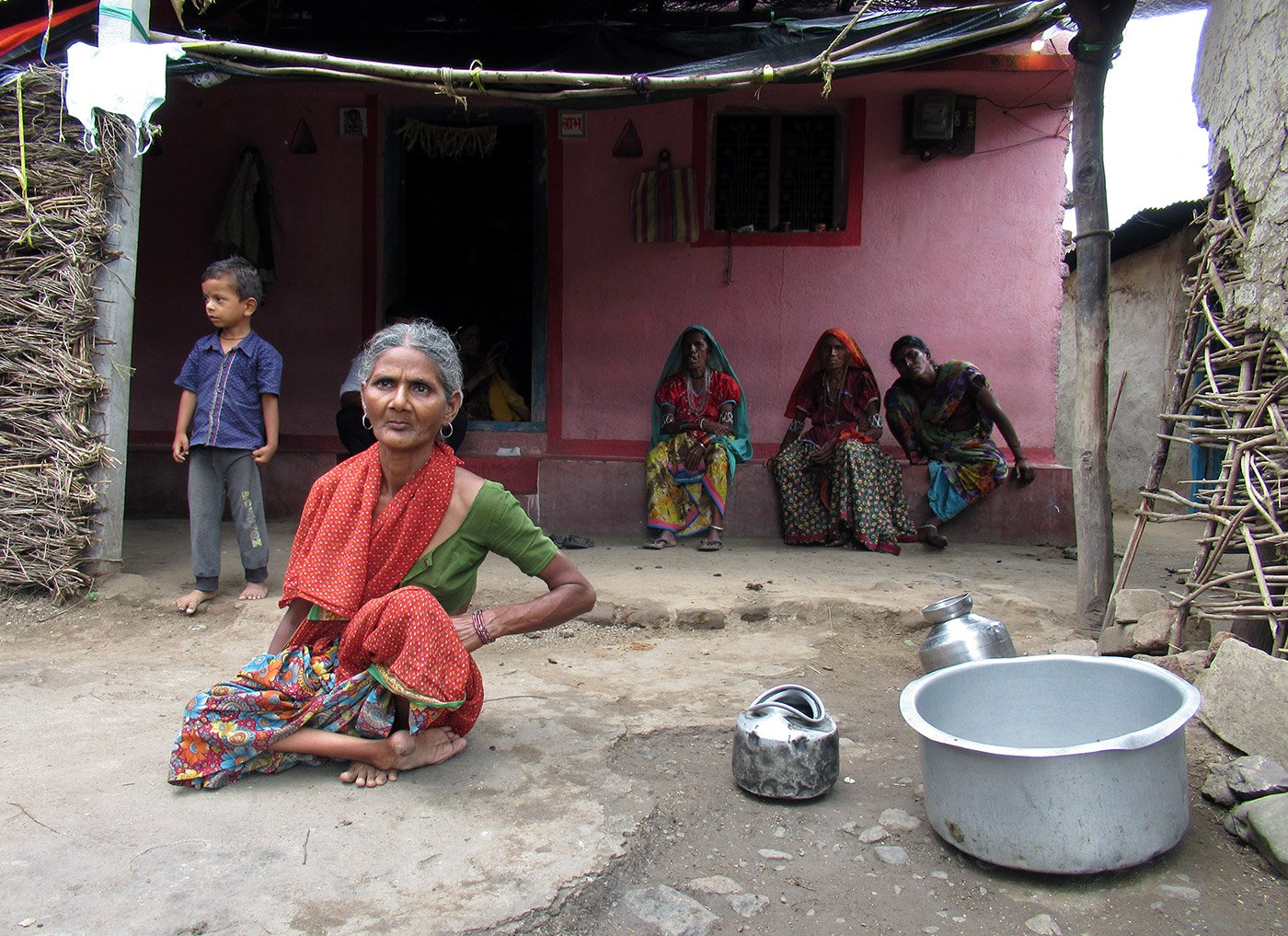 Recurring droughts in Marathwada have forced people in villages like Sawarkhed to drink fluoride-contaminated groundwater from borewells, which has inflicted debilitating fluorosis on many

Not many in Sawarkhed village of Nanded’s Mahoor taluka smile or laugh unreservedly. When interacting with a stranger, they are mindful of their mouths. “It is embarrassing,” says Rameshwar Jadhav. As he speaks, you can see that all his teeth are rotten and misshapen, their colours ranging from yellow ochre to dark brown.

Ramaeshwar, 22, an agricultural labourer, is not the only one with this problem in Sawarkhed, a village of around 500 people. Almost every adult’s teeth here have deteriorated in varying degrees. Many also have a limp or are permanently hunched over as they slowly make their way through the narrow alleys and green fields. Those who can walk, need frequent breaks. The entire village appears to move in slow motion in a different era.

This tableau has been created by what’s inside the earth, beneath the feet of the villagers: the groundwater here contains fluoride. This is a chemical that is naturally present in soil, rocks and groundwater.  But in concentrated form, it can be extremely harmful. According to the World Health Organisation, more than 1.5 mg of fluoride per litre of water is dangerous for consumption. In Sawarkhed, it was 9.5 mg when the Groundwater Surveys and Development Agency (GSDA) checked the fluoride level around 2012-13.

“The formation of flourosis depends on the extent of flouride in water, and therefore its progression varies," says Dr. Ashish Ardhapurkar, a physician based in Nanded town.  Once the deterioration sets in, he says, it cannot be reversed. "But children are protected from it. They become vulnerable to dental flourosis only after they develop wisdom teeth, and to skeletal flourosis after their bone growth, which mostly happens after the age of six." 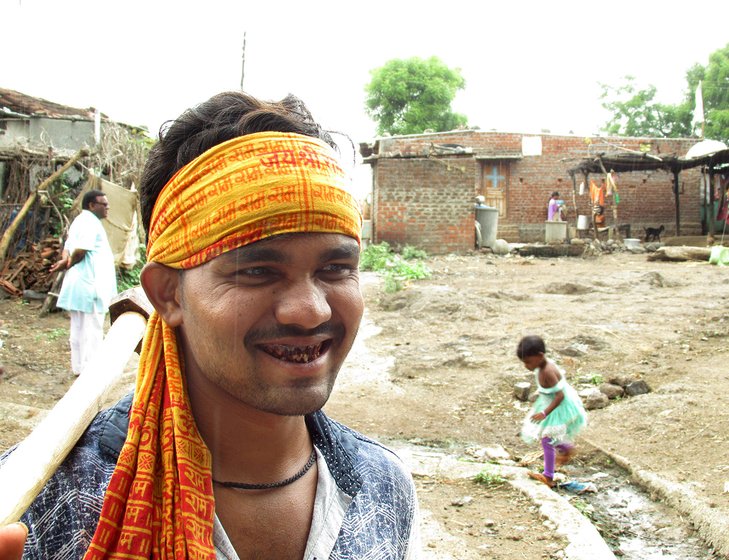 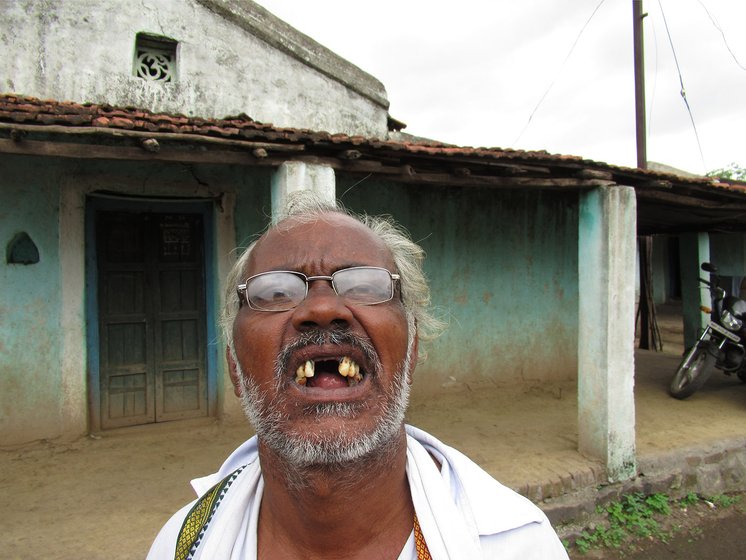 “Fluorosis can be checked in the initial stages,” says Satish Berajdar, a well-known dentist in Latur town. “If not, the effects are far-reaching. People are permanently handicapped, their teeth are destroyed. It reduces the body’s immunity and overall ability to cope as well, and makes you vulnerable to other diseases.”

But the people of Sawarkhed didn’t know this for a long time.  They kept consuming the contaminated water until 2006, when the state provided a tap at a dug well. That well is around one kilometre away, and even today is not sufficient for the drinking needs of the entire village. Whereas handpumps on borewells are at nearly every doorstep. “We knew the water we drank [from handpumps] was not the purest. But nobody told us it was so dangerous. And when you are desperate for water, you have to consume what you get,” says Madhukar Jadhav, a 55-year-old farmer and agricultural labourer.

By the time awareness started creeping in, it was too late for Madhukar’s sister Anushaya Rathod ( in the cover photo on top ). “It  started with pain in the knees [some 30 years ago],” she says, her teeth all gone. “The pain then spread across the body. Eventually, the shape and size of my bones changed, reducing me to a cripple.”

When the pain in the joints began, the family did not imagine it was due to the water they were drinking. "We thought it was an ordinary illness," Madhukar says. "Later, when it became alarming, we took her to many doctors in Yavatmal, Nanded and Kinwat. I must have spent over one lakh rupees, borrowing most of it from relatives and friends. But no treatment worked and I did not have the capacity to spend more. Eventually, we gave up…”

According to the Ministry of Drinking Water and Sanitation, as many as 2,086 water sources in Maharashtra have fluoride, along with nitrate and arsenic – both highly harmful too

Anushaya, now in her 50s,  cannot stand on her feet anymore. She can hardly move around, and has to use her hands because her bony legs remain folded into each other. This has been her condition for over 10 years. “I have become a burden on my family,” she says. “I live with my brother, he looks after me. But I feel guilty I cannot do anything for him and his family.”

Madhukar has seen his own productivity fall over the years. “If I work for an hour on the farm, I have to take a break of half an hour. My back aches a lot,” he says. “It is a task to even attend to nature’s call. The body is so inflexible.”  Madhukar cultivates cotton, tur and jowar on his six acres. He also works as an agricultural labourer. “Nobody pays me the amount that labourers usually get [around Rs. 250 a day]. It is saddening to see your worth go down.”

Pankaj Mahale’s family too tried various treatments, but he lost his 50-year-old father six years ago. "He had skeletal flourosis," Pankaj, 34, says. "He was bent from the waist. We took him to bone specialists, to doctors in Nanded and even Nagpur. But they said my father's bones have become so brittle that even a minor jerk could break him down. They gave him calcium medicines that cost 3,000 rupees per month. To take him to doctors in various places, we had to hire a private car. The expenses ran into lakhs by the time he died. The district administration did not offer any free medical help." 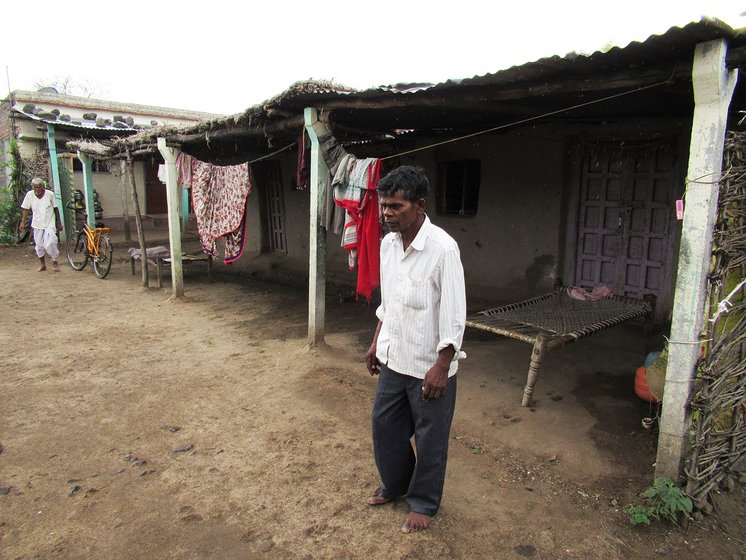 Many in these villages of Marathwada, afflicted by skeletal fluorosis, limp or have misshapen bones

So where did the excessive flouride in Sawarkhed’s water come from? Drought is at the core of the flourosis in this region. For several decades, the farmers here have been drilling borewells to extract groundwater for irrigation, washing and bathing. But with water shortages growing in increasingly arid Marathwada in the last two decades, they started drinking the groundwater too.  Flouride exists in some groundwater sources, but the deeper a borewell is dug, the more the chances of the flouride content increasing.  Additionally, fertilisers, pesticides, sewage, industrial effluents and depletion in groundwater led to higher concentrations of flouride.

Although a borewell must not go deeper than 200 feet (according to the Maharashtra Groundwater Act of 2009) , borewells in Marathwada are frequently as deep as 500 feet or more. Without any monitoring of the number and depth of borewells, and with water requirements increasing due to erratic rainfall and a shift to cash crops, farmers  in this region desperately drill deeper until they find some water.

And if a village is unlucky to have sunk a borewell where the fluoride content is high, as Sawarkhed was, the chemical slowly seeps into the people – so much so that 209 of Sawarkhed’s 517 residents are now categorised as “non-workers” by Census 2011. And a report of the National Programme for the Prevention and Control of Flourosis notes that (till 2013) 3,710 persons in Nanded had dental fluorosis, and 389 had skeletal flourosis.

Local journalist Dharmaraj Hallyale, who has followed this crisis closely, says even after tap water was made available in Sawarkhed in 2006, for four years the tap did not function properly. “There would be no electricity,” he says. “So the pump wouldn’t work. I wrote to the district collector and the state government. I followed it up for a month, before it was eventually fixed in 2010.” Hallyale also filed an RTI (Right to Information) application seeking information for the entire state – and 25 districts [out of a total of 36] turned out to have fluoride in their water sources in varying degrees. 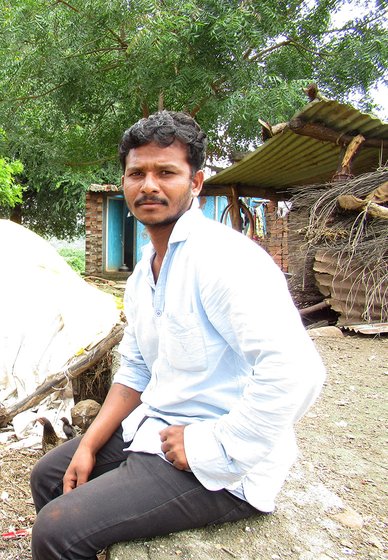 These numbers vary depending on the source of the data. According to the Ministry of Drinking Water and Sanitation, in the year 2016-17, as many as 2,086 water sources in Maharashtra had fluoride, along with nitrate and arsenic – both highly harmful too. The number has apparently decreased over the years – in 2012-13, it was 4,520. In Nanded district, according to an affidavit filed by the collector in August 2014 at the National Green Tribunal (NGT), water sources in 383 villages had flouride over permissible limits, of which 257 were provided alternative sources of water. In 2015-16 though, the GSDA categorised 46 villages in Nanded as flourosis-affected, and claimed that merely four of those remain to be tackled.

On January 11, 2016,  following an application by a team of nine advocates led by Asim Sarode about villagers being forced to drink flouride water, the NGT ordered the collectors of 12 districts in Maharashtra  along with the GSDA to, among other measures, monitor water quality and publish district-wise information; provide alternative water sources; and provide medical facilities to patients free of cost. When this was ignored, on November 28, 2017 the NGT issued warrants against the 12 district collectors, including those of Nanded, Chandrapur, Beed, Yavatmal, Latur, Washim, Parbhani, Hingoli, Jalna and Jalgaon.

Meanwhile, Sunegaon (Sangvi) village, around 200 kilometres from Sawarkhed, now has a dug well, which did not exist before. After the Limboti dam was constructed around 2006, a lake formed near the village of 630 residents in Latur’s Ahmadpur taluka . This enhanced percolation, and when they dug a well in 2007, they hit water.

But by then Sukesh Dhavale, 30, had consumed fluoride-infused groundwater for 20 years, and seen his health deteriorate like the people in Sawarkhed. “I constantly feel  there is a layer on my teeth,” says the agricultural labourer, getting up from under a tree, his joints audibly creaking.  “The layer falls off after a while. But so does a part of the tooth. I cannot eat anything hard. My joints also hurt, I cannot work for long.”

At the Ahmadpur laboratory of the GSDA, around eight kilometres from Sunegaon (Sangvi), the person in charge searches on a computer, at our request, for a list of fluorosis-prone villages; an adjacent village, Sunegaon Shendri, is on the list of 25 such villages in Latur district. Govind Kale, 35, of Sunegaon Shendri, who is with me,  exclaims, “We have been drinking groundwater for a year now. The common [dug] well in the village is not working. The entire village drinks borewell water. Why is anybody not doing anything about it? Why are we not warned in advance?”

Eighty years after this problem was first highlighted in Andhra Pradesh’s Nalgonda village (now in Telangana) – even a documentary titled Crippled lives was made on this – no lessons seem to have been learnt.