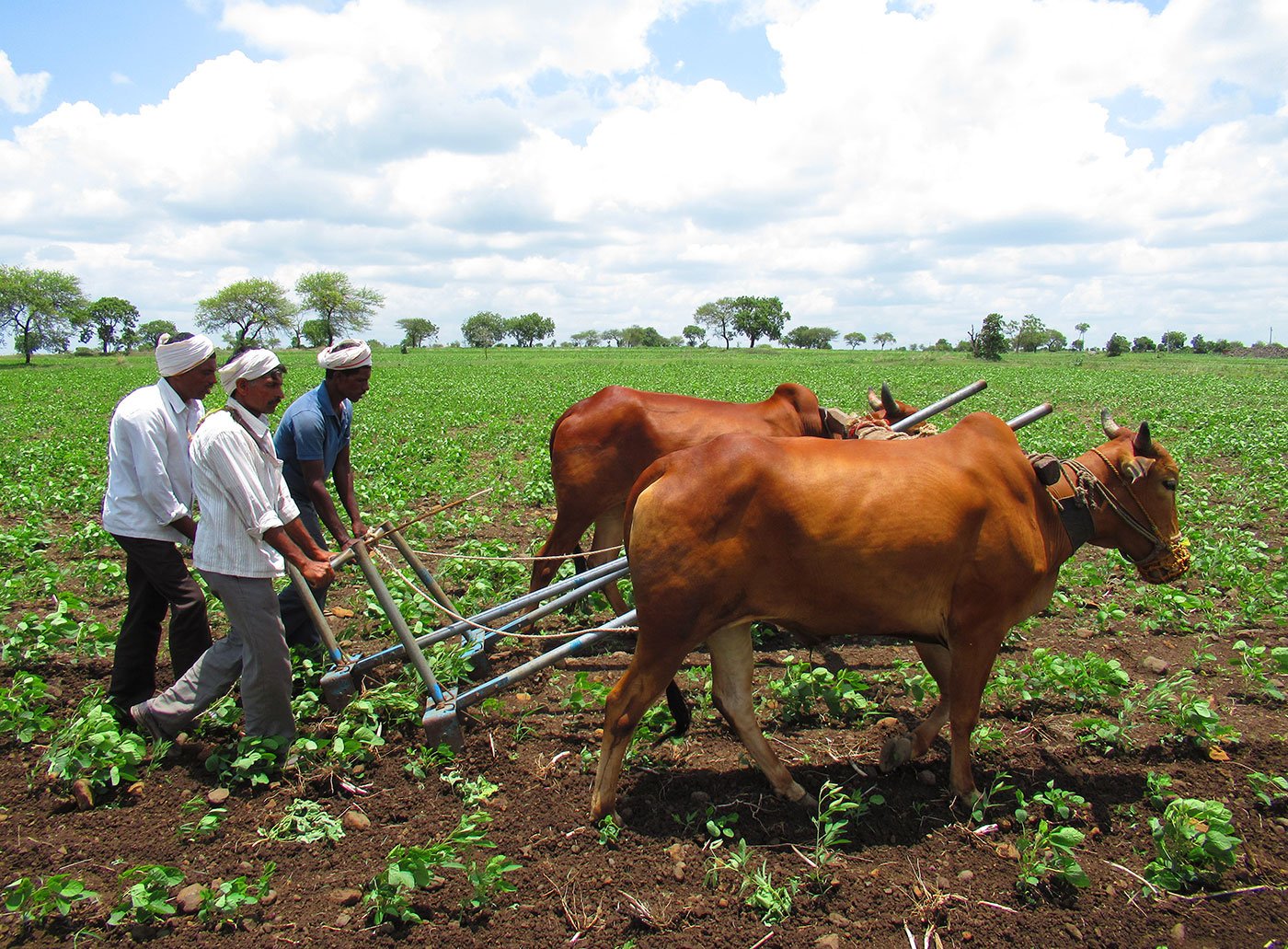 Rainfall failure in Marathwada means the first round of kharif sowing of mid-June will yield little, pushing farmers to risk a dicey second sowing. They desperately need to raise some cash ahead of the rabi season

Ambadas Kakade has taken a calculated risk: he has planted a second crop during this kharif season. It’s his last hope to recover a portion of his farming costs.

Around mid-June, after decent initial monsoon showers, the 83-year-old farmer of Moregaon village in Sailu taluka of Parbhani district had planted cotton, soyabean, tur and moong . But then, until around mid-August, there was no rain at all in Marathwada. Crops dried up or remained stunted in vast areas of the region, including Parbhani. Kakade’s soya, tur and moong shrivelled up too.

“I have 10 acres,” Kakade says. “I plucked out an acre of cotton and replaced it with cabbage [at the end of July]. It is a three-month crop, and does not require much water. I will replace some other crops with tomato [which too needs less water] if it does not rain.”

By replacing an acre of his already-planted cotton crop with cabbage, Kakade has lost the Rs. 15,000 he invested in June on that acre. If the dry streak persists, he also risks losing the additional Rs. 15.000 he has spent on sowing cabbage. “I know I won’t be making a profit this season,” he says. 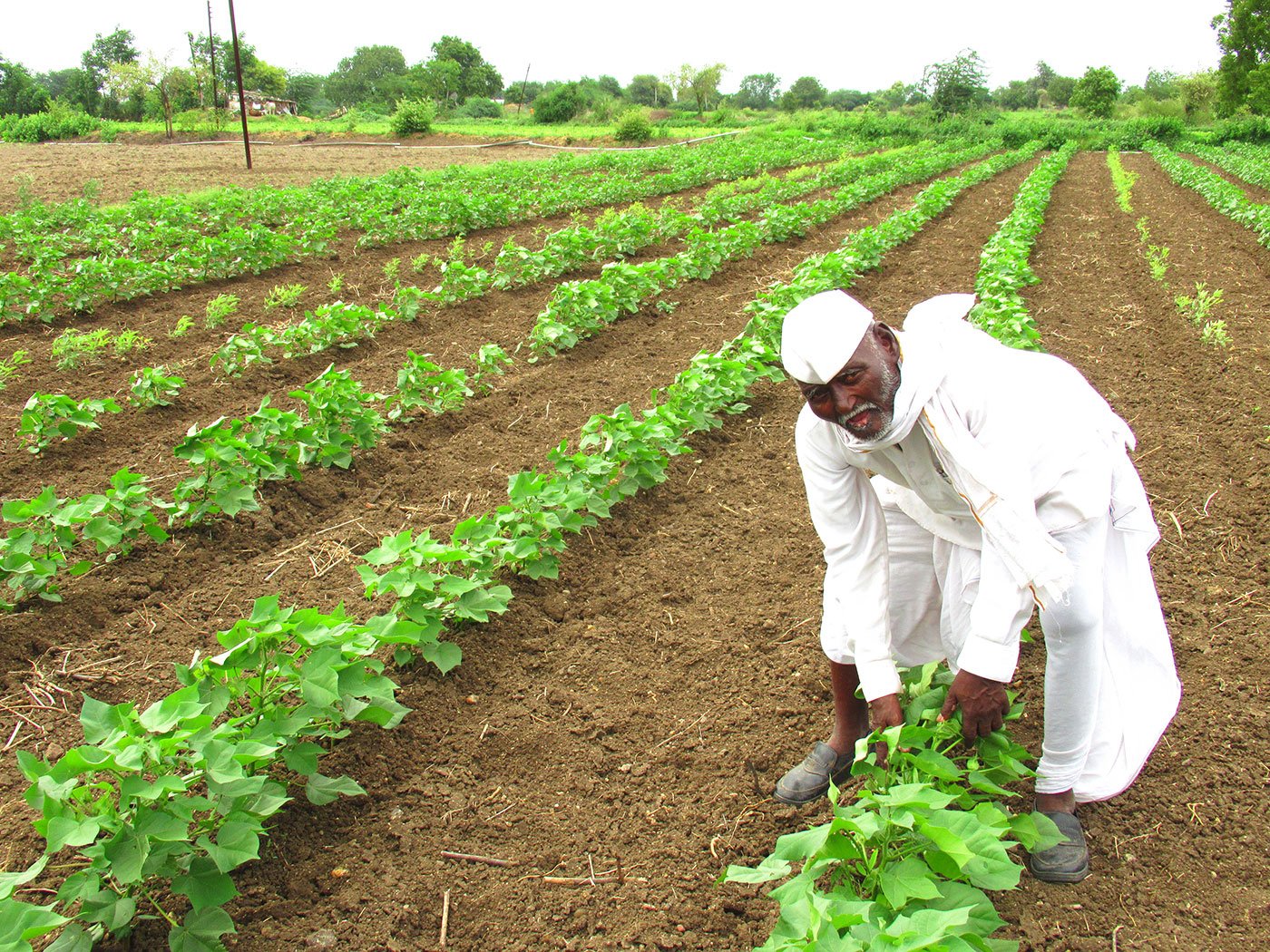 Ambadas Kakade, 83, took a calculated risk when he replaced an acre of his cotton crop with cabbage this kharif season

Kakade has a bank loan of Rs. 3 lakhs and a private loan of Rs. 5 lakhs. “I am only hoping to recover my sowing costs of both crops [on that one acre]. We are all at the mercy of nature’s whims. The weather has become more uncertain over the last 10 years. I hope I won’t have to beg for money ahead of the rabi season in October.”

Kadade will retain some of his cotton crop because he cannot sow other crops on all 10 acres – that will need more money, which he does not have. And he is hoping for a full revival of the monsoon after it rained in Marathwada in the second half of August. If the showers continue, the cotton crop can be harvested by November, and could bring decent returns. The dried up food crops of the first sowing though won’t revive.

By opting for a second round of sowing – a dobar perni – on a portion of his land, Kadade is hedging his bets. When Marathwada’s farmers do the first round of kharif sowing around mid-June, the crops require consistent rainfall to grow. If the rain is scarce or absent, the farmers know that the first round will not give them enough returns. Reluctantly, they again muster up the capital and courage to invest in a second sowing around the first week of August, hoping to at least recover their investments. If it rains after the dobar perni , the gamble will pay off. If it does not, it will be a crushing double blow.

Kakade is in his 80s – at that age, he says, slowly walking through his farmland , the uncertainty affects him. “We are 16 family members. All my three sons are married. They also do agricultural labour [in nearby villages] for extra income. My grandchildren help on the farm and study, they are young.”

In Khupsa village, around three kilometres away, Sahebrao Dasalkar, 49, has followed in Kakade’s footsteps. Of his 12 acres of cotton, he has phased out 1.5 acres; he too is still hoping for some returns on the rest of the crop. “I have incurred a loss of 25,000 rupees on the 1.5 acres,” he says. “I have now planted cabbage on it. I did not replace larger portions of the crop because even if it rains later, the cotton can still throw up 2-3 quintals an acre [in a good monsoon, it can be 6-8 quintal], and I can at least make some money [around Rs. 4,000 per quintal from it.” 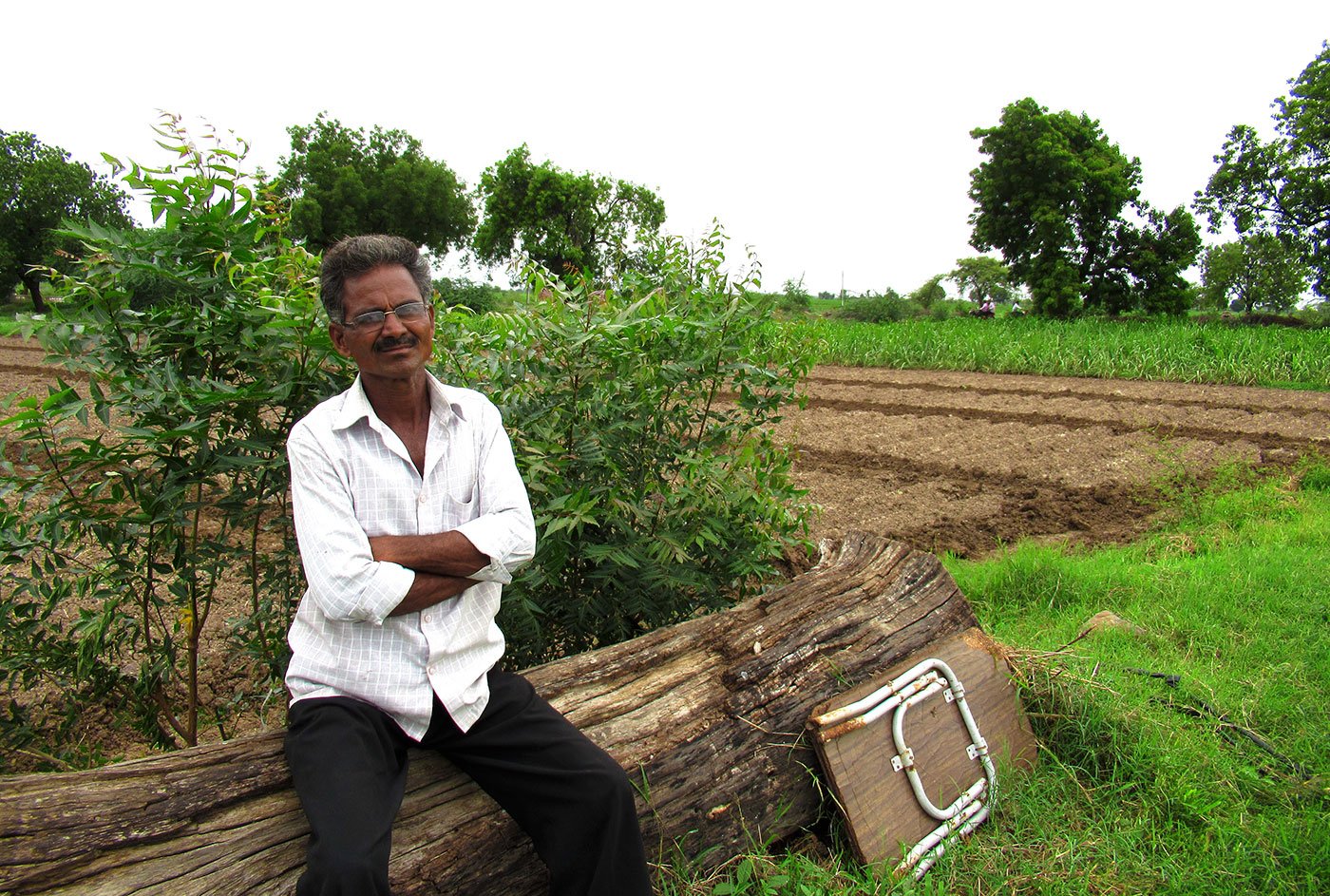 Sahebrao Dasalkar from Khupsa village has phased out 1.5 acres of cotton for cabbage, hoping for better returns this year

Farmers in Marathwada who are only cultivating food crops are in deeper trouble because of the inability of such crops to survive a prolonged dry spell. In Malihapparga village of Jalkot taluka in Latur district, Hari Kendre, 35, has been working as a labourer on someone else’s farm because his own crops have dried up. “That is the only way I can raise capital for the dobar perni ,” he says, while working the plough. “My soyabean, moong , tur and black gram are all down to nothing on the 10 acres I own. That is a loss of 60,000 rupees.”

Along with the scarce rainfall, the water reservoirs in Jalkot have also gone dry. “Sunflower [a food crop] is not water intensive,”  Kendre says. “If I manage to raise enough money through my 200 rupees daily wage, I will plant sunflower…”  This dobar perni is the only way he can now raising some money ahead of the rabi season in October. “I have a private loan of 4 lakhs,” he says. “I will be in a hole if I borrow more. I have to raise money through my crops.” 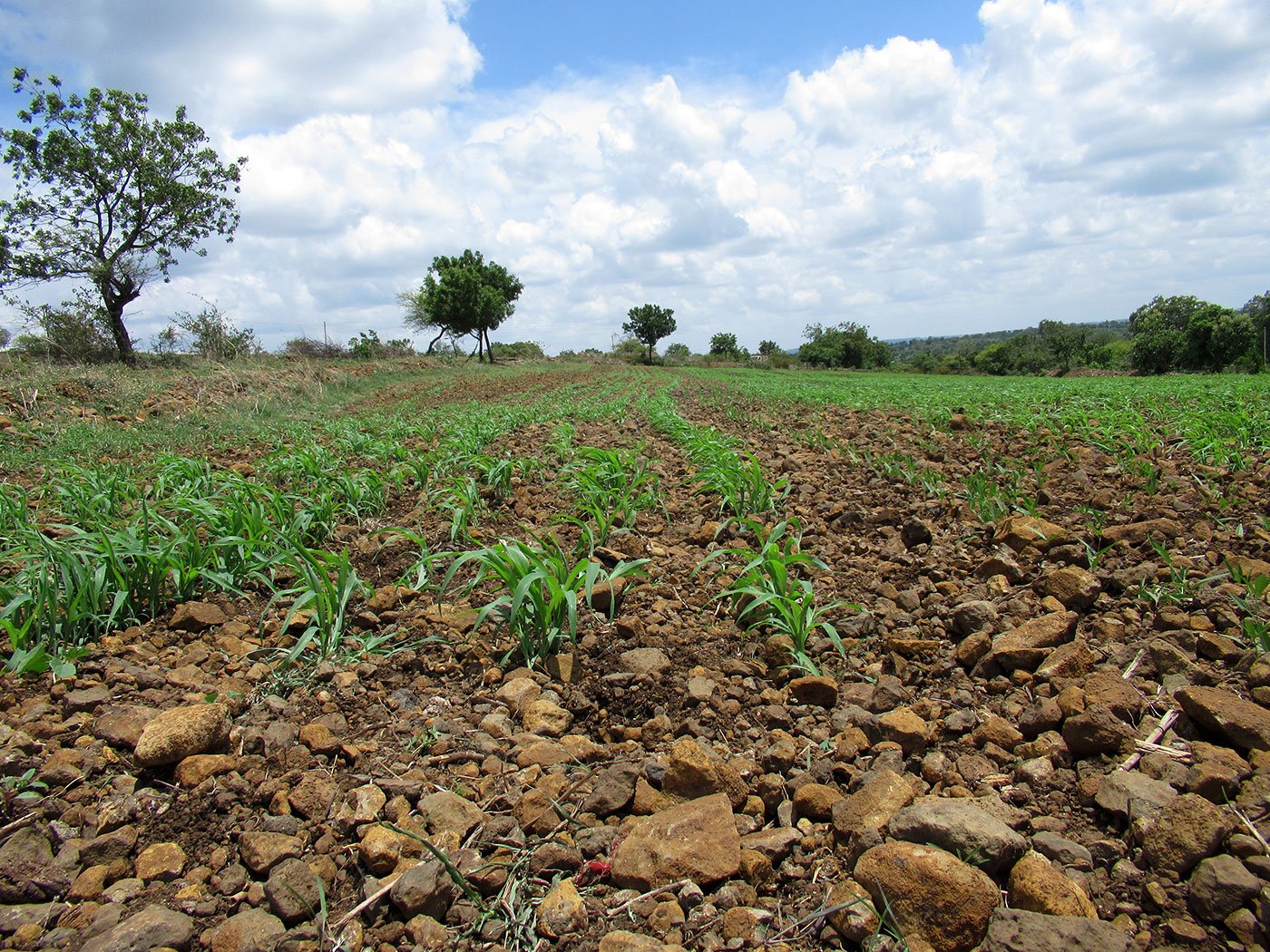 With the lack of rainfall, many crops have either dried up or have seen stunted growth

In previous years too, farmers in Marathwada have found themselves in a similar fix. A promising start to the monsoon has given way to long weeks without a drop of rain. Many have then tried their luck with a dobar perni . But the region has seen four years of drought from 2012-2015, and the farmers’ ability to raise credit for sowing has steadily fallen with each such year. So in 2017, fewer farmers have mustered up the courage; many have simply accepted that the kharif season will be unproductive.

Ganesh Bhalekar, 32, of Majalgaon village in Beed district, says many farmers are staying away from a second round of sowing this year because they had already borrowed money to raise capital ahead of the kharif season. “To borrow more and take the risk of another round of sowing would be suicidal,” he says. “We have enough debts on our head. It is practical to directly prepare for the rabi season.”

Left: Ganesh Bhalekar with his children in Majalgaon village in Beed district. Right: Suresh Chole and his wife at their farm

Bhalekar has a debt of close to Rs. 1 lakh from a private moneylender. As a tenant farmer with no land of his own, he is unable to get loans from any bank. He farms 18 acres of land – sugarcane on 13 and soyabean on five. According to his arrangement with the landowner, Ganesh takes care of 25 per cent of the expenses, the owner pays for 75 per cent. Profits or losses are shared in the same manner.

“The five acres of soyabean have totally dried up,” he says, pointing to the desolate crop. “I have accepted that my entire investment of 15,000 rupees on soyabean has been washed away. And the lack of rains has impacted sugarcane as well. Look at these white spots on the cane. The harvest will be poor…”

Unlike Bhalekar,  in Kolnoor village of Jalkot taluka Suresh Chole has no cash crops like cotton or sugarcane to bank on if the rains revive. The soyabean, tur and jowar that he  planted on his 4.5 acres are all in poor shape. “Look at them,” he says. “By this time [the first week of August], the plants should reach waist high. They are barely scratching the ankle.” Even if the monsoon picks up later in August, it won’t matter to Chole. “The crops require consistent rains,” he says. “I invested 45,000 rupees at the time of sowing to buy seeds, fertilisers, pesticides, and pay for labour. I won’t even recover 10 per cent of that….”

Watch Video: 'Look at them. By this time, the plants should reach waist high. They are barely scratching the ankle,' says Suresh Chole

Which is why, like rest of this agrarian region, Chole has to take a difficult decision: should he sow for a second time and risk losing more money? “I am not confident,” he says. “The drought has [so far] been quite acute. I don’t have the courage to take further risks.”

In mid-August, two weeks after that conversation, Marathwada received heavy showers, providing some respite to the farmers who had opted for the dobar perni . Others, like Chole, may be wishing they too had chosen a second sowing this year – but that is a gamble all farmers here live with every year.