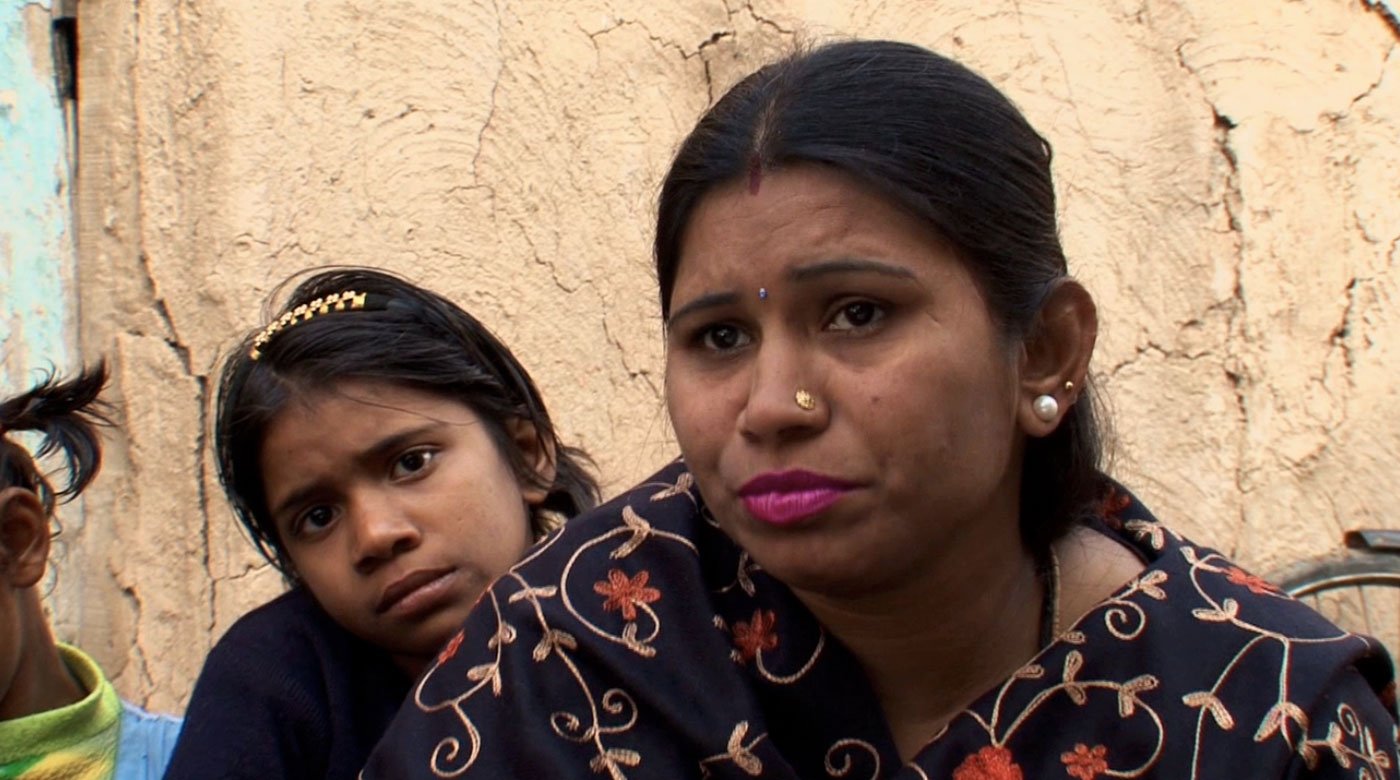 Manju fights to change the script

Nearly buried alive at birth herself, she speaks up for the girl child amid Haryana's falling sex ratio

"The day I was born, my father tried to bury me alive," Manju Singh tells me. "The moment he knew he'd had a daughter, he charged into the windowless room in which my mother had delivered me and started digging a hole in the mud floor. The umbilical cord had just been cut. My maternal grandmother scooped me up and fled."

Sitting before a wood stove in her outdoor kitchen in Haryana, Singh is cooking breakfast. It's winter, around dawn, and the 35-year-old mother of two speaks in a matter-of-fact tone, not allowing her narrative to interrupt the rapid motion of her rolling pin. The year is 2012 and there's bad news from India’s just-published Census report: the number of girls born, compared to boys, has fallen drastically between 2001 and 2011– from 927 to 919.

"That I lived is nothing short of a miracle," Manju continues. "My mother had to fight hard to keep me alive. Even while I was growing up my father tried several times to kill me. He'd beat me to pulp. But somehow, I lived through it all. I was just that stubborn." She laughs.

For generations, no girl child in Singh’s family in Sadikpur village had been allowed to live. When she was 10, Manju’s father told her that he had watched his sister being buried alive by his father. Killing new-born female progeny was a family ‘tradition’. The strictly ‘sons only’ policy was implemented ruthlessly.

‘That I lived is nothing short of a miracle,’ Manju says, while cooking on a wood stove

What happened in Singh's family over generations was not an isolated instance. Female infanticide – an unfortunate confluence of culture and economics – was practiced in some parts of India for centuries. The methods varied from region to region, but all were equally macabre – feeding the baby grain husk to slit her windpipe, a morsel of rice to choke her, tobacco juice to poison her. Strangulation, starvation, overfeeding, and the fate Manju escaped – being buried alive – were also common.

These methods are now rare, though not entirely absent. In 2014, according to National Crime Records Bureau data, 121 cases of infanticide were reported in the country. But female infanticide in India was once widespread enough to necessitate a law against it: the Female Infanticide Prevention Act of 1970. It only succeeded in making the killers more furtive, their crimes harder to detect.

What did nearly eradicate infanticide was ultrasound, a technology that came to India in the late 1980s. With ultrasound imaging techniques, parents could identify the gender of their child in the womb. Identification services combined with sex-selective abortions at affordable prices mushroomed all over India. Though the practice of infanticide declined, many more girls actually died.

In 1994, India passed the Pre-Conception and Pre-Natal Diagnostics Techniques Act to prohibit sex determination during ultrasound. But the Act, as well as an amendment passed in 2003, have been ineffective: India's ratio of young girls to young boys has slid lower every decade. 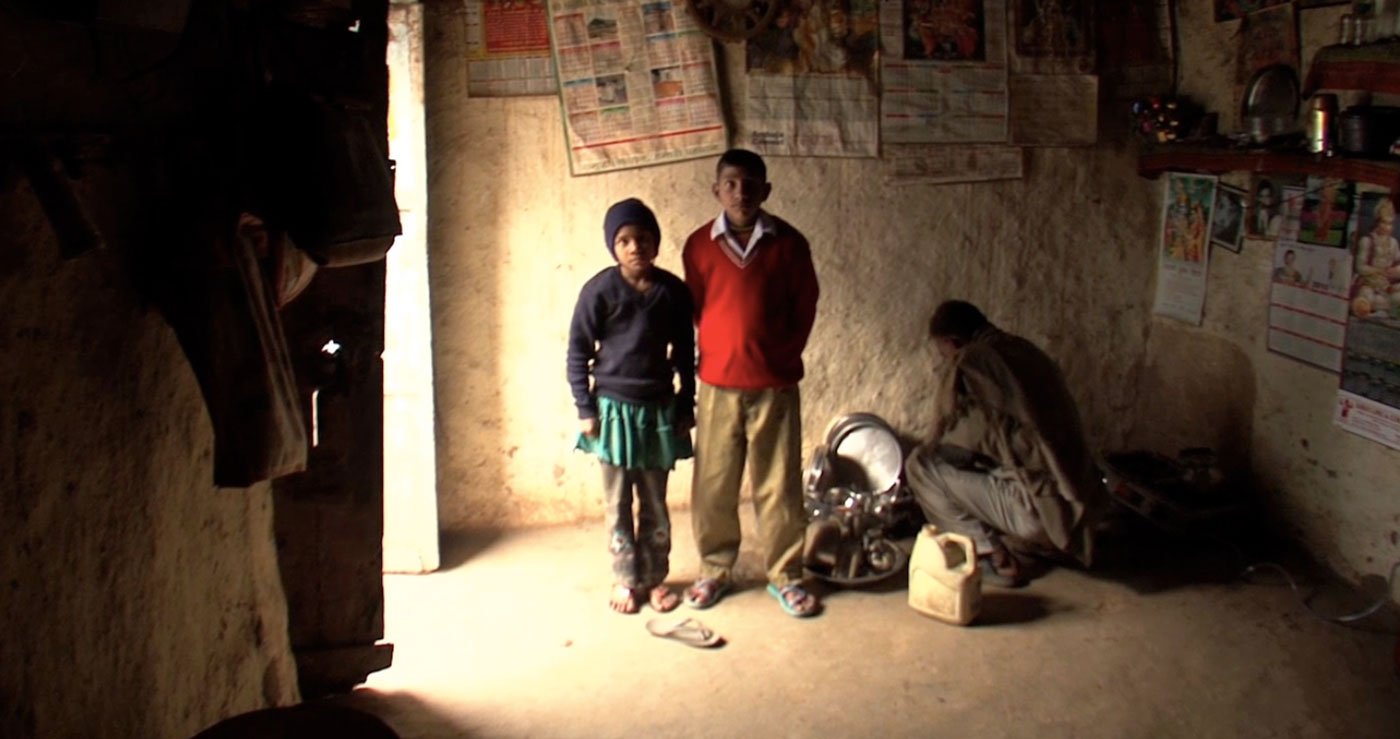 Manju’s kids and husband: ‘I love my son too, but my daughter is special'

Manju is trying to counter this in her corner of Haryana. Breakfast cooked, she is now vigorously working the hand-pump in the courtyard to fill water for her family for the day. She tells me about the traditional rituals that accompanied infanticide in different parts of India:

"In the state of Rajasthan a popular song urges the daughter not to return to this land. They used to sing that after killing the infant. And in Punjab they would place the girl alive in an earthen pot with a lump of jaggery, some gram and raw cotton yarn. Then they buried the pot while chanting ‘ Gud khaanyi, punni katti. Aap na aayi, veerey nu kalli' [Eat this jaggery, spin this cotton. Don't come back. The next time, send your brother instead]’."

Manju explains: "Gram and jaggery are symbols of celebrating a boy child. And the cotton yarn is what a sister ties on her brother's wrist to ask for his protection. These male symbols are meant to invoke a son."

Singh is a health and gender rights advocate in her community in Ambala district; she works (at the time of our meeting) with the Voluntary Health Association of Punjab . She educates village women about preventing the crime her father tried to commit. "I understand women’s concerns, the pressures they face. I never preach to them; I try to befriend them. That's the only way to make change happen," she says as she winds up her household chores and steps out for the day. 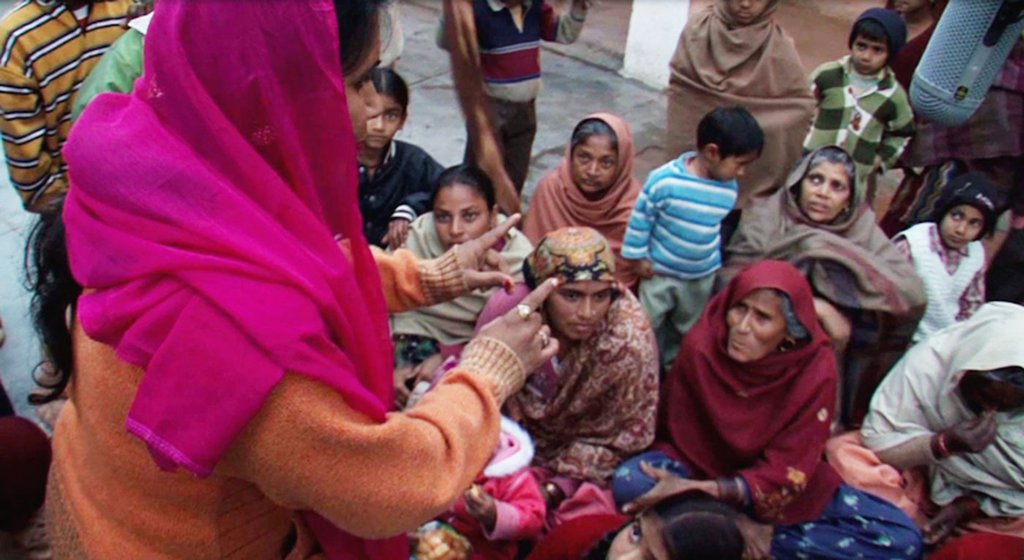 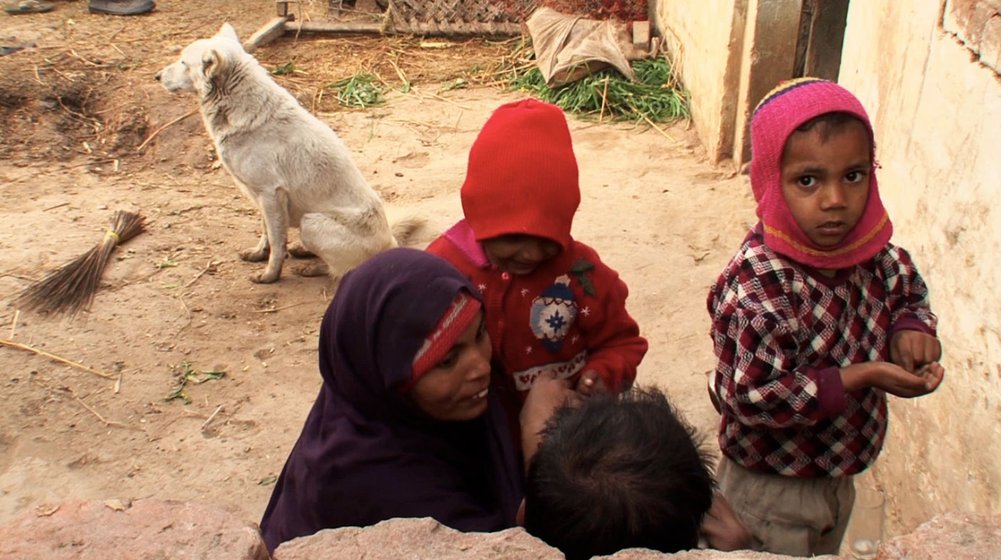 Left: Addressing a meeting, discussing the relative ‘merits’ of sons and daughters. Right: According to Census 2011 data, Haryana has only 834 girls for every 1,000 boys in the 0-6 age group

Our first stop is a village meeting. A crowd of women has gathered and a raucous debate is underway. The topic of discussion is the relative ‘merits’ of sons and daughters. Many women give various reasons for their preference: "Daughters are expensive to bring up. We need to spend on their dowries;" "Sons earn money, they bring dowries. Daughters only take from their families;" "A daughter gets married and goes away but a son is always there to look after you;" "Raising a daughter is like watering a tree in your neighbour's garden."

Then a middle-aged woman at the back of the crowd pipes up in a robust tone: "All of you who want only sons, can you tell me who will make the babies? Can men give birth to children? We need girls too. Girls are great! Ask me, I have two daughters." The air becomes thick with cheers.

But the truth is, there is little cause for cheer. According to Census 2011 data, Haryana has only 834 girls for every 1,000 boys in the 0-6 age group. There aren't enough girls in the state for young men to marry. Entire villages in Haryana are now devoid of brides. Bachelors are desperate, trying everything from propitiating the gods to buying brides from other states and arm-twisting local politicians to get them brides in exchange for votes.

Says Singh, "When I got married I learned about sex-selective abortion. It was all around me. It was happening in practically every home. Women were under immense pressure to do it. Many of them were undergoing five, six, even 10 abortions in the quest for a son. It's physical and mental torture. I felt very strongly that I should work with women to try and stop this killing... It was a calling from deep within. 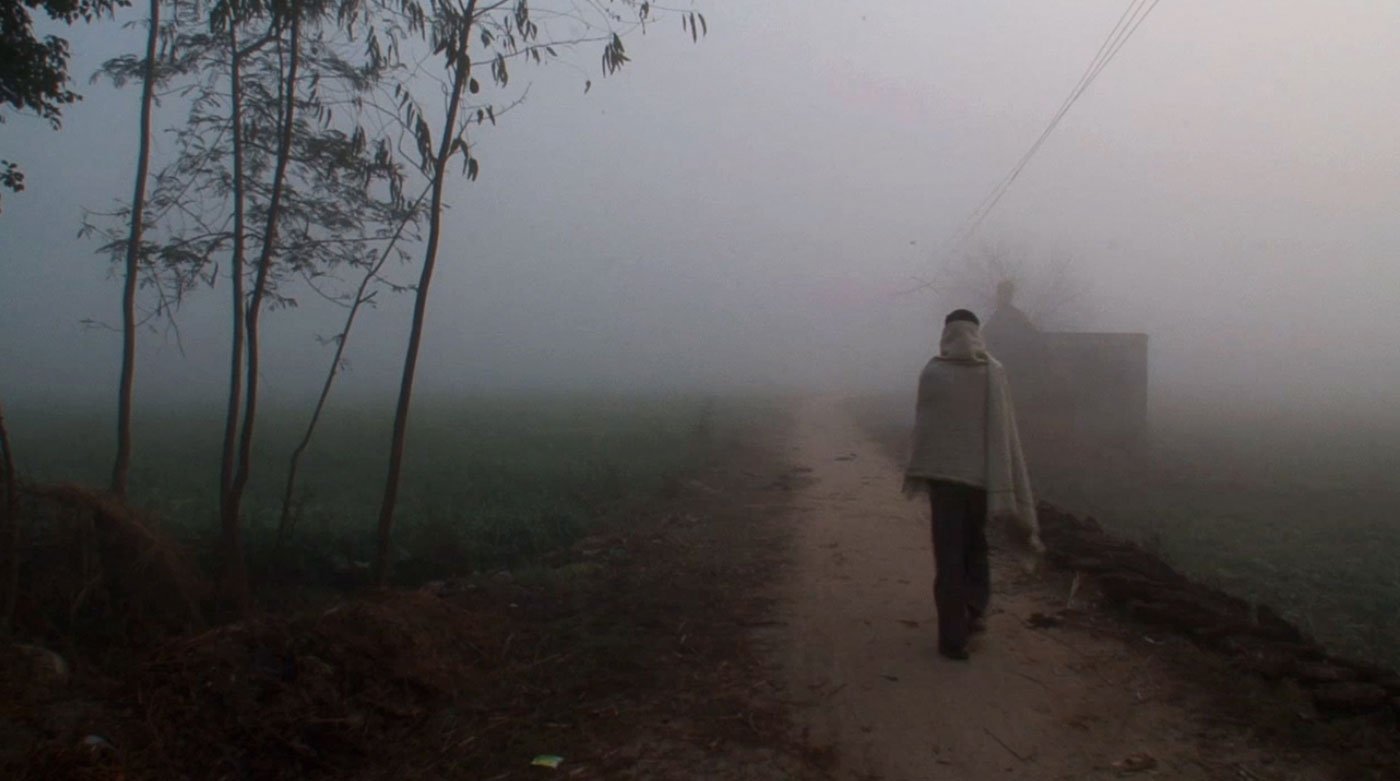 A cold wind is blowing on the way back to Sadikpur that evening; at Manju’s home, her daughter awaits us with steaming cups of tea

"Even medicine can become a poison if not used correctly," Singh tells me. "Ultrasound technology was supposed to be used to improve the health of mothers and babies. But society has used it as a killing tool. People are complicit. So are doctors. It's illegal to reveal the sex of the child and sex-selective abortion is illegal too. But it happens all the time, clinics do this everywhere. And it's so much easier compared to infanticide that people feel it is okay."

At the end of a day of trudging from village to village, addressing meetings, gathering data, chatting with pregnant women, and talking to young mothers who've just given birth to female children, it's time for Manju to head home. The sun is setting and there's a cold wind blowing. Her daughter is back from school and busy preparing for her mother's arrival. Steaming cups of tea and biscuits await us.

Ruffling her daughter's hair, Singh praises her effort and then turns to me and asks, "Do you have a daughter?" "Yes," I answer. "Then," she says, "you'll know what I mean when I say that they are precious. When I was pregnant for the first time, I prayed for a girl. And god heard me. I love my son too, but my daughter is special."

Svati Chakravarty is an independent writer, researcher and director. A communications practitioner since 1986, she has focused on issues related to social justice

Other stories by Svati Chakravarty