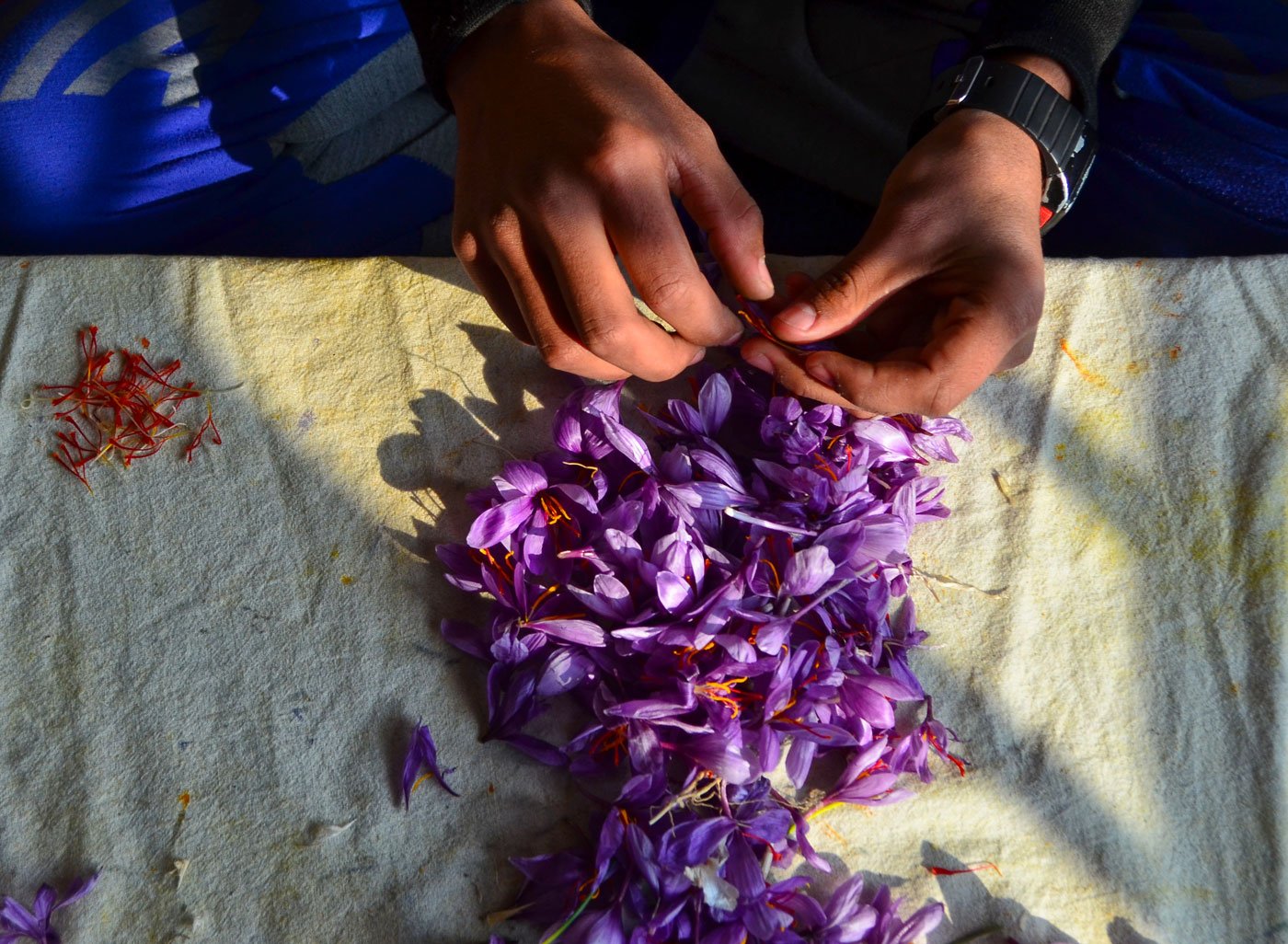 In Pulwama, a different shade of saffron

Saffron farmers in Kashmir are facing a bleak season – an early snowfall, the restrictions imposed after Article 370 was scrapped and a shortage of labourers have hit a trade already in a slump for years

“If we had been informed about the snowfall in advance, we would have hurried up with the harvesting,” says Mushtaq Ahmad.

Ahmad lives in Nambal Bal village of Pampore block in south Kashmir. Here, around mid-May every year, he and other farmers plant the Crocus sativus – the 'saffron crocus'. And from around mid-October to mid-November, they harvest the flower. Its crimson portions (the flower’s stigma and styles) become the popular and high-cost kesar .

Kashmir is the only state (now union territory) in India that grows saffron. Some of it is brewed in the local kahwa tea, while most of it is sent to other states in the country, where it is mainly used in food preparations, in ayurvedic medicines and in temple rituals.

But this year, Kashmir received its first snowfall nearly a month early – on November 7. That affected the flowering plants.  As a result, Waseem Khanday of Maij village in Pampore harvested only 30-40 grams of saffron – instead of the 250-300 grams he was expecting – per kanal on his 60 kanals of land. And instead of an estimated Rs. 20,000 profit per kanal (8 kanals equal 1 acre), he is now facing a loss of more than Rs. 3 lakhs.

“We had high hopes this season, but untimely snow damaged our crop,” says Abdul Majeed Wani, president, J&K Saffron Growers Association, which has around 2,000 members. Wani estimates that the total loss to Kashmir's saffron farmers this year will be roughly Rs. 20 crores. The saffron trade is valued at Rs. 200 crores, said Dr. Zainul Abidin, president, Kashmir Chamber of Food Processing Industries, at a recent press conference.

Ahmad’s and Khanday’s villages are among the 226 villages in Jammu and Kashmir where some 32,000 families cultivate saffron, notes a document prepared by the divisional commissioner of Kashmir. Many of these are in the Pampore region of Pulwama district. Together, they produce around 17 tons of saffron every year, says Syed Altaf Aijaz Andrabi, the director of agriculture. 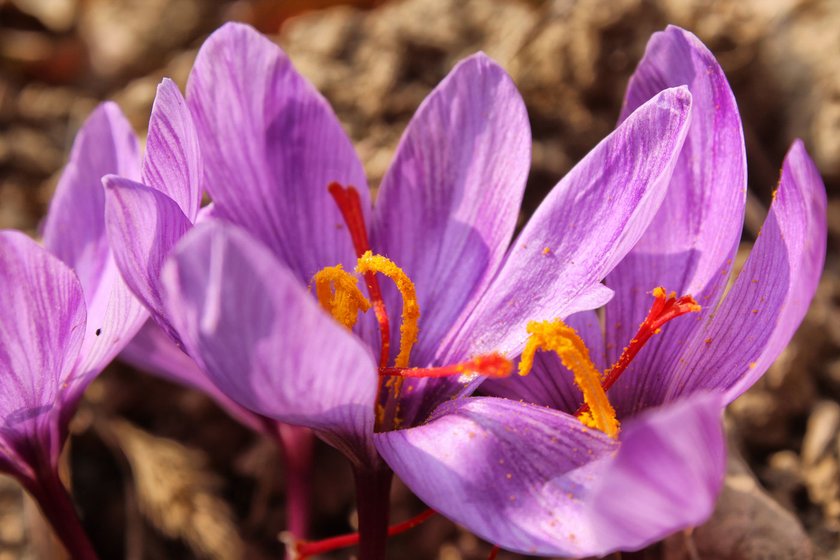 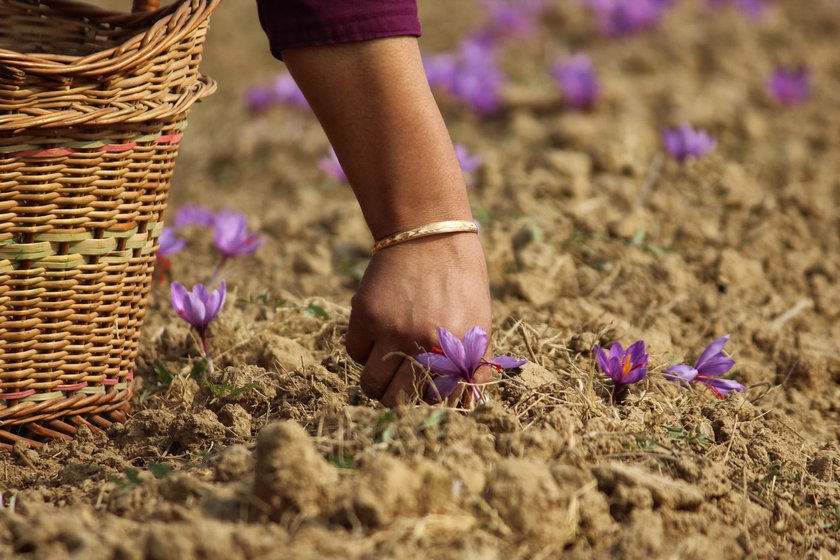 Saffron flowers in full bloom (left) in the fields of Pampore before the November 7 snowfall this year (left). A farmer (right, who did not want to be named) plucking saffron flowers in her field in the Galendar area of Pulwama.

But over the years, the land on which this cash crop is cultivated in Kashmir has reduced from more than 5,700 hectares to around 3,700 hectares. Farmers here speak of changing rainfall patterns (either less than normal rain in the monsoon months of August-September, or untimely rain) and poor irrigation as some of the reasons for the shrinking acreage.

Some of them say that even the National Saffron Mission, introduced in 2010, has not helped much. The Mission’s many aims included improving production systems, augmenting research and marketing, providing sprinklers and borewells, and introducing better quality seeds. “But the results are not visible. There are complaints by many farmers that a lot of money was misused…” says Ghulam Mohammad Bhat, who owns seven kanals in the Drangah Bal area of Pampore block in Pulwama district.

“The new saffron seeds provided by the local agriculture officers has not brought good results, though they claimed it will increase the yield,” says Abdul Ahad Mir. Like the other saffron growers in Kashmir, he too is trying to absorb the losses of this year’s poor crop.

But an early snowfall is not the only reason for the poor harvest. The political uncertainty and restrictions that followed the abrogation of Article 370 by the central government on August 5 also hit the crop. “Due to the restrictions we could not reach our fields and tend to the bulbs that were ready to sprout,” says Aijaz Ahmad Bhat, another saffron grower from the Drangah Bal area.

The post-August departure of large numbers of migrant labourers who seasonally come to Kashmir seeking work also affected the crop, forcing saffron farmers to hire local labourers at much higher daily wages, says Bashir Ahmad Bhat, a saffron grower from Zafran Colony of Pampore. “It is not a profit-making business anymore,” he adds.

The internet shutdown also pushed up the losses. “Our children used to regularly check the weather forecast on the internet,” says Mushtaq Ahmad. In the past, recalls Waseem Khanday, “We could tell when it would rain or snow by looking at the clouds. But we got so dependent on the internet that we stopped noticing the changes in weather.” 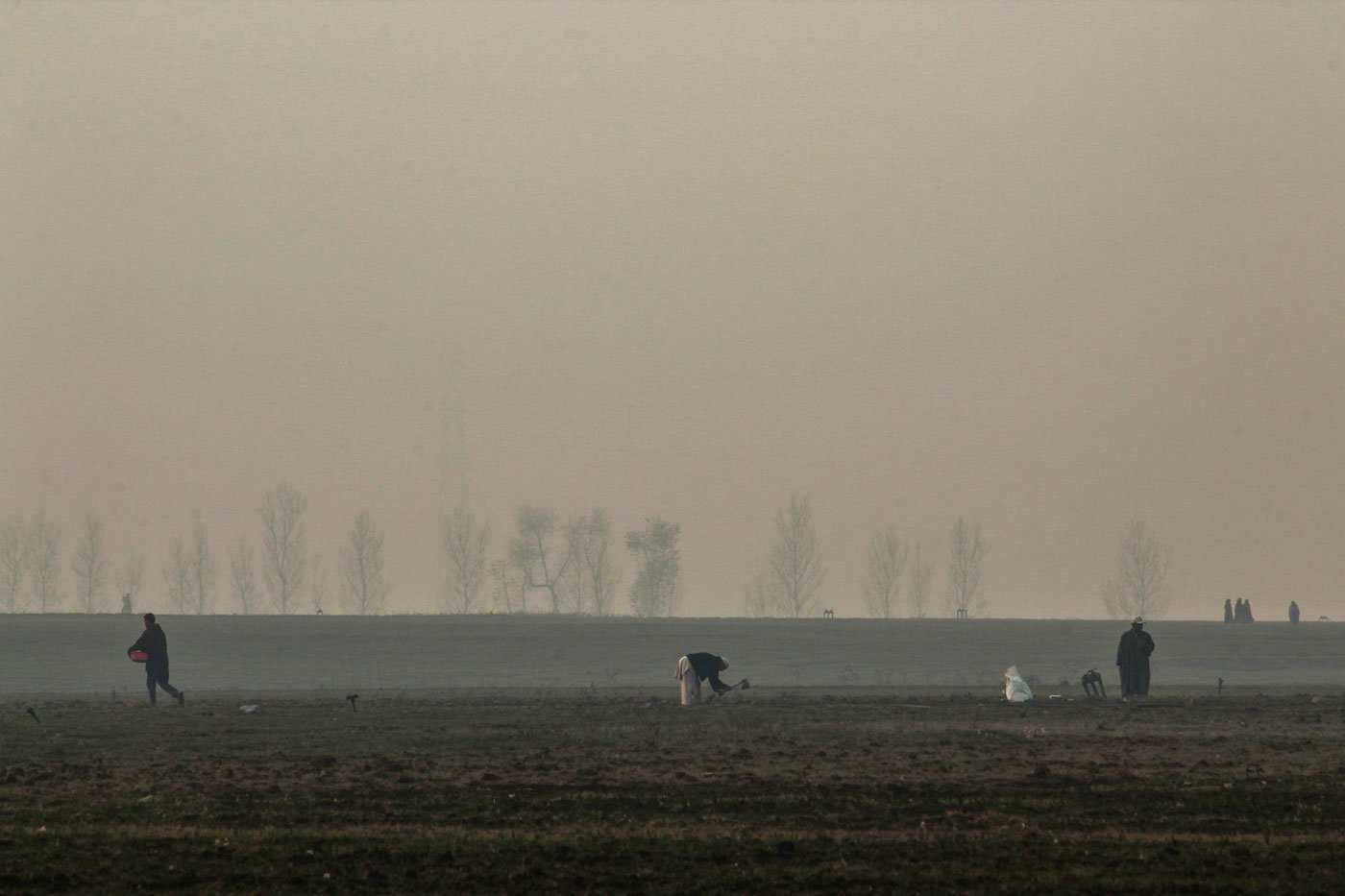 Farmers from the Khrew area of Pampore block in Pulwama district tilling and adding fertilisers in their saffron fields on a winter morning. 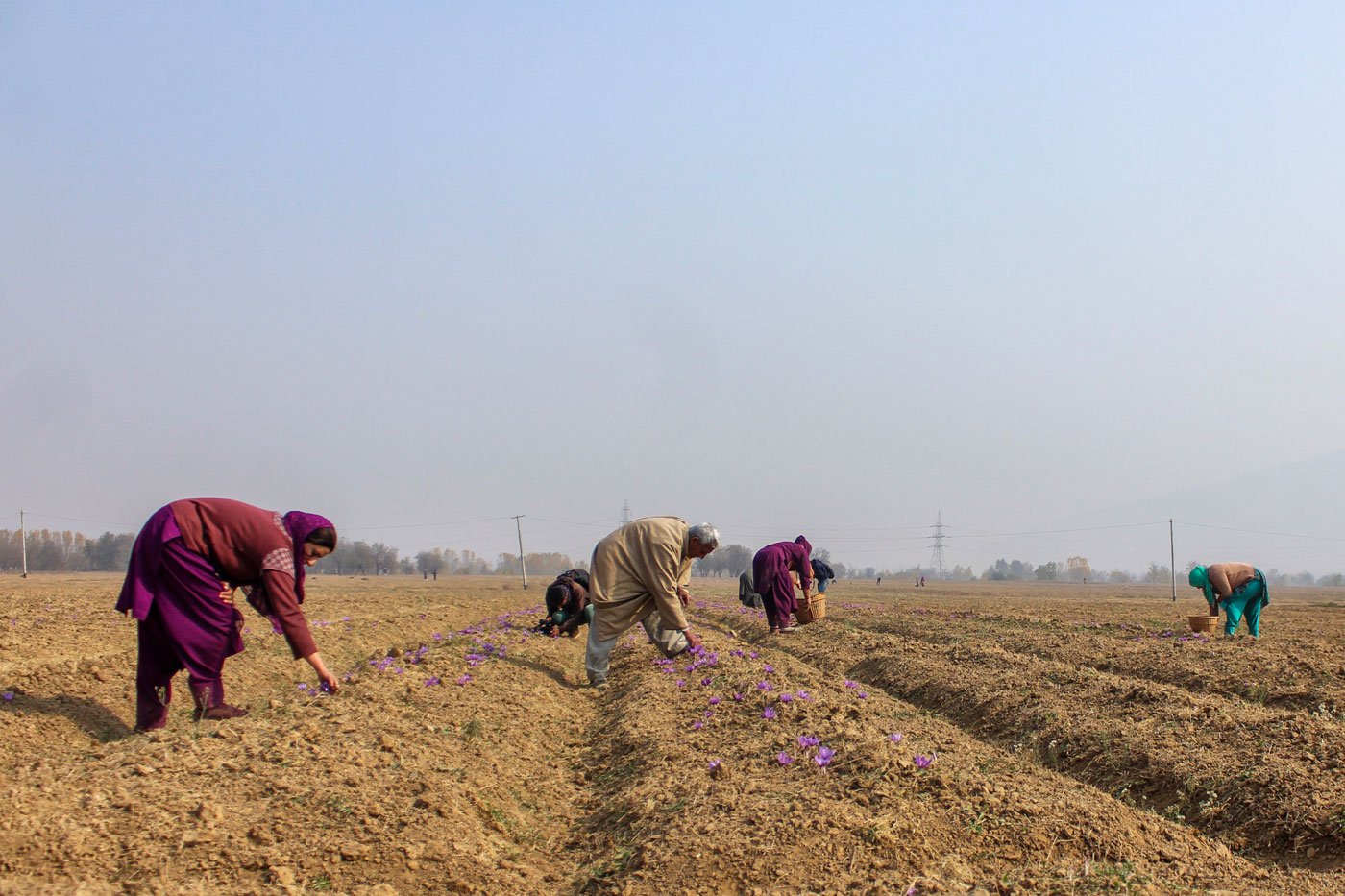 Abdul Ahad, 65, plucking saffron in his six- kanal field along with his family in the Lethpora area of Pulwama district. He has been cultivating saffron for 30 years. 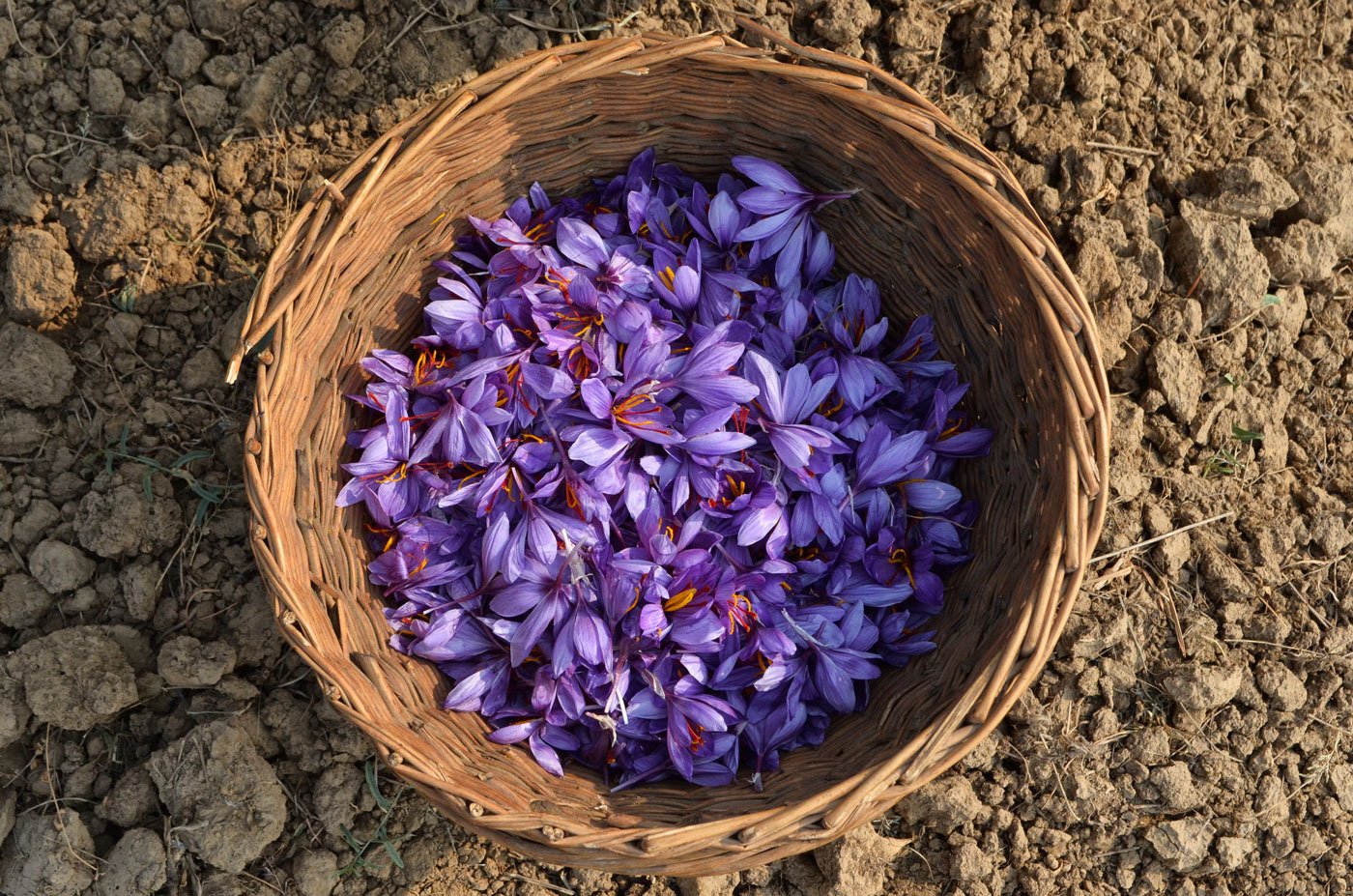 Saffron flowers from the fields of the Lethpora area of Pampore block in Pulwama district. 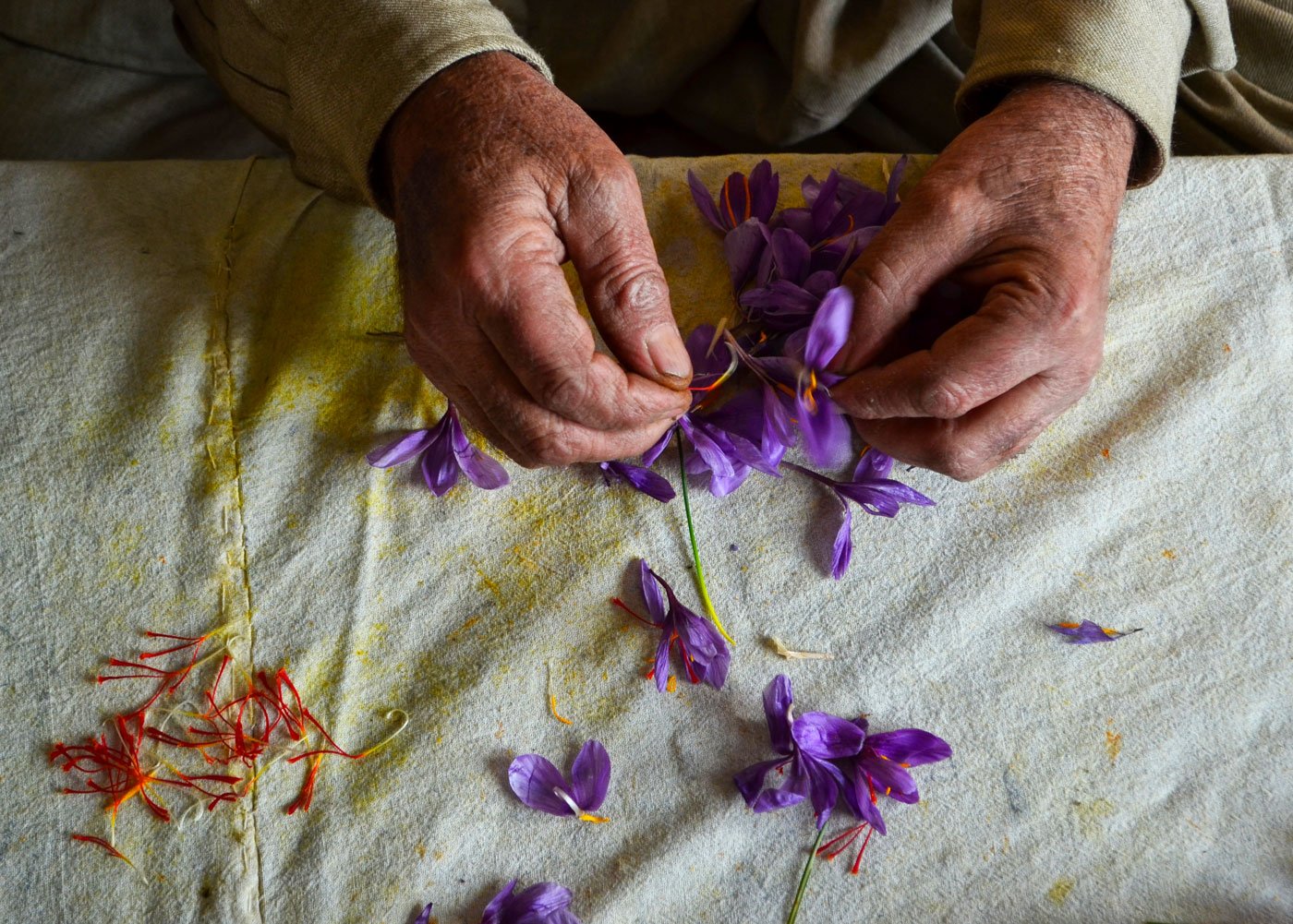 Abdul Rashid, 55, extracting the saffron strands from flowers at their home in the Khrew area of Pulwama. 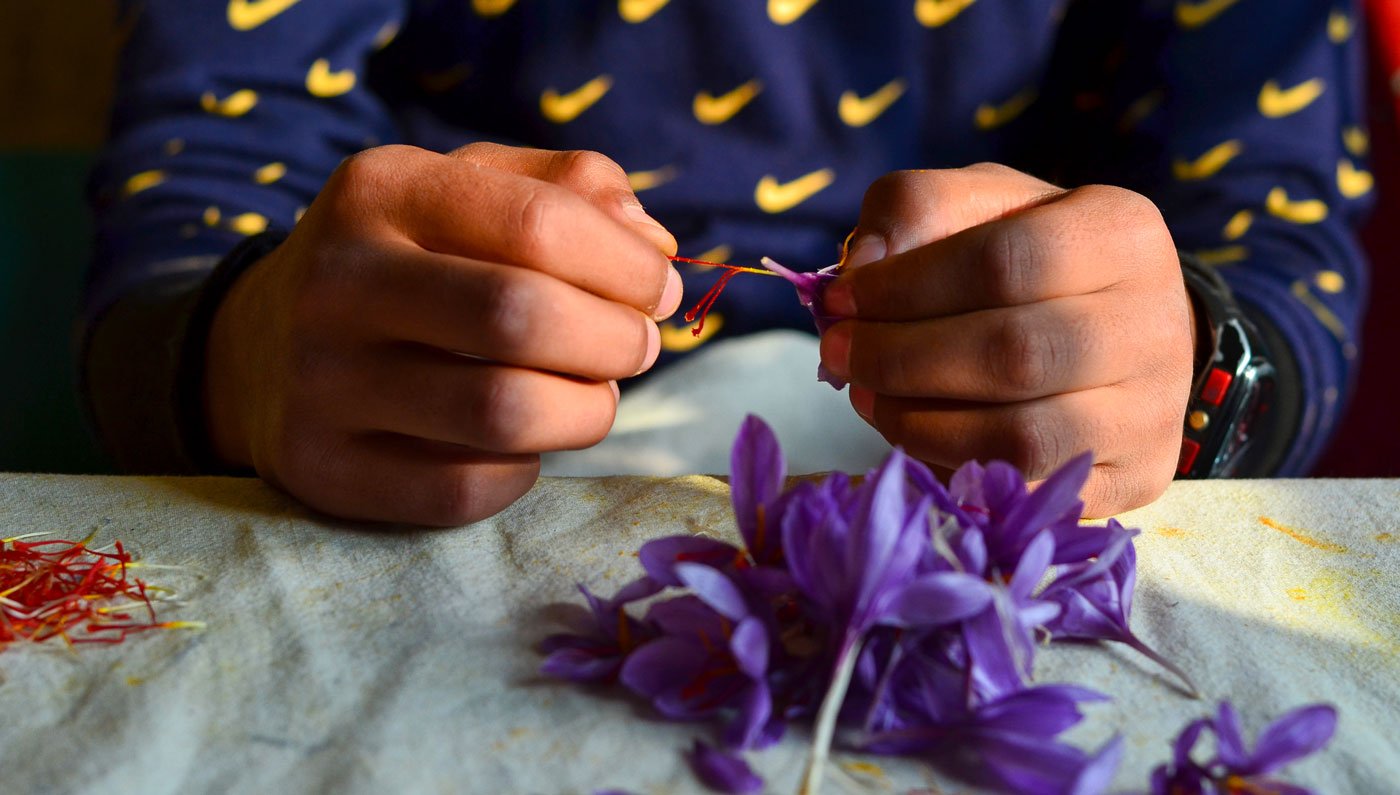 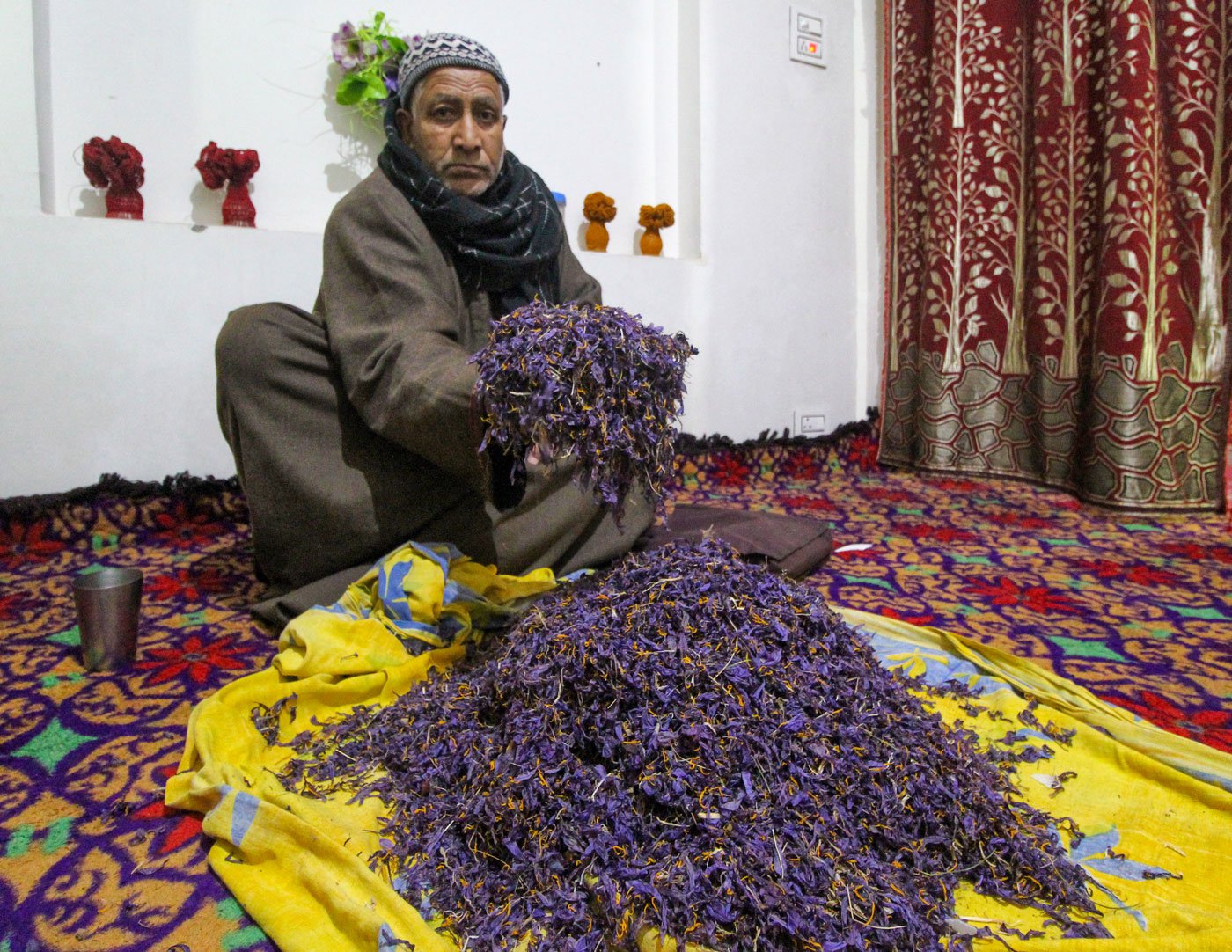 “The crop is facing a fall for the last five years,” says Haji Abdul Ahad Mir, 70. His family has cultivated saffron for three generations on their eight kanals of land. “Saffron farming is a skill which I have inherited,” he says. “But if the youngsters farm in the wrong manner [sowing and handling seeds incorrectly] we may lose this crop forever.” He is hopeful that this season’s snowfall will give way to a good harvest next year. 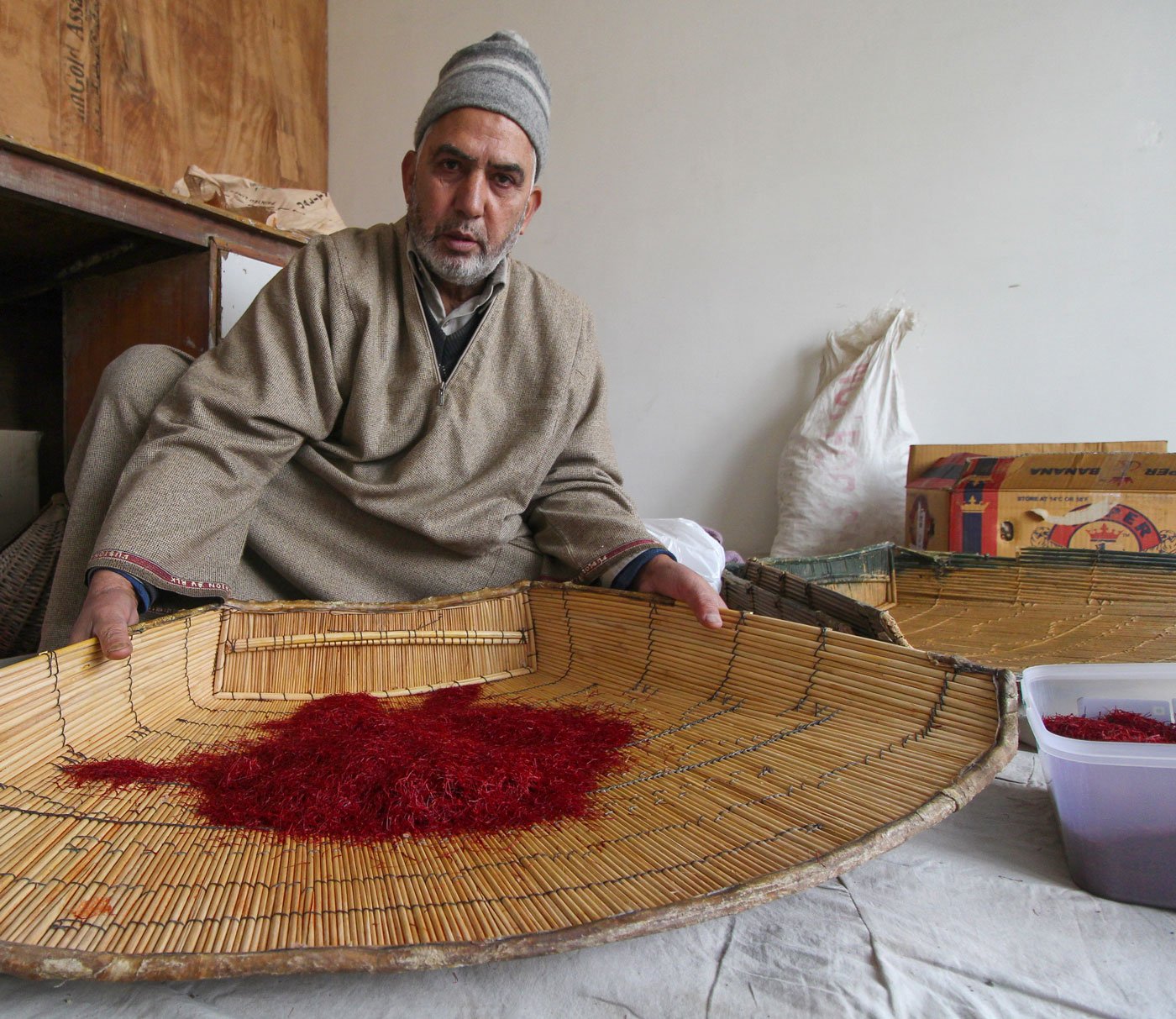 Ghulam Mohammad Bhat, a saffron grower and seller from the Drangah Bal area in Pulwama district, is grading saffron for sale at his home. Saffron is usually graded in three levels – the top quality contains only red strands and no buds, the medium quality contains flower buds, and the third quality is the extract and remnants of the top-grade saffron. 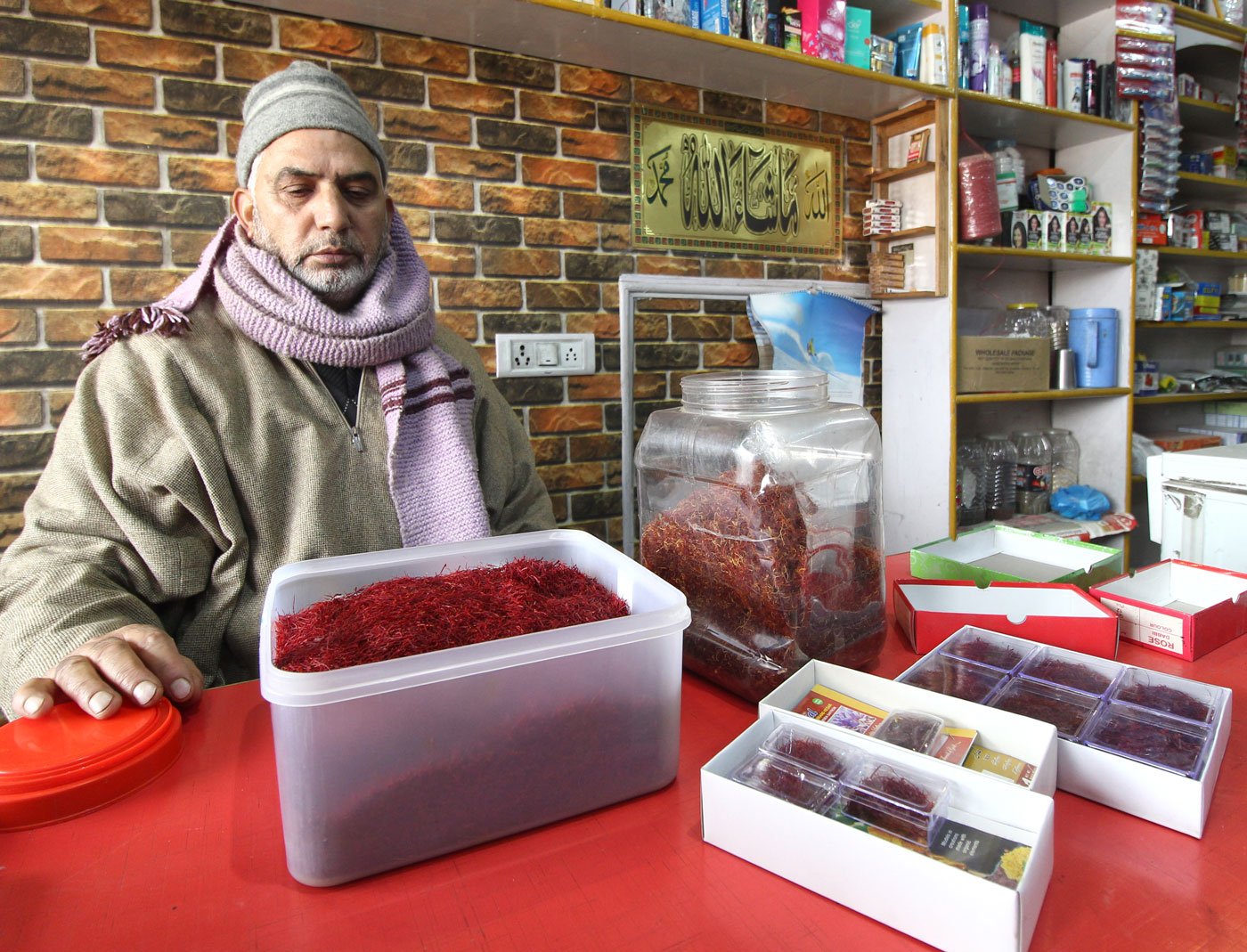 Ghulam Mohammad Bhat also owns a small kirana shop in Drangah Bal. He has been cultivating saffron on the family’s seven kanals of land for more than three decades. “I was expecting one kilo of saffron this year, but could only get 70 grams. The snow damaged my crop,” he says. He adds that the internet shutdown has meant he did not know an early snowfall was on its way to wilt his field.