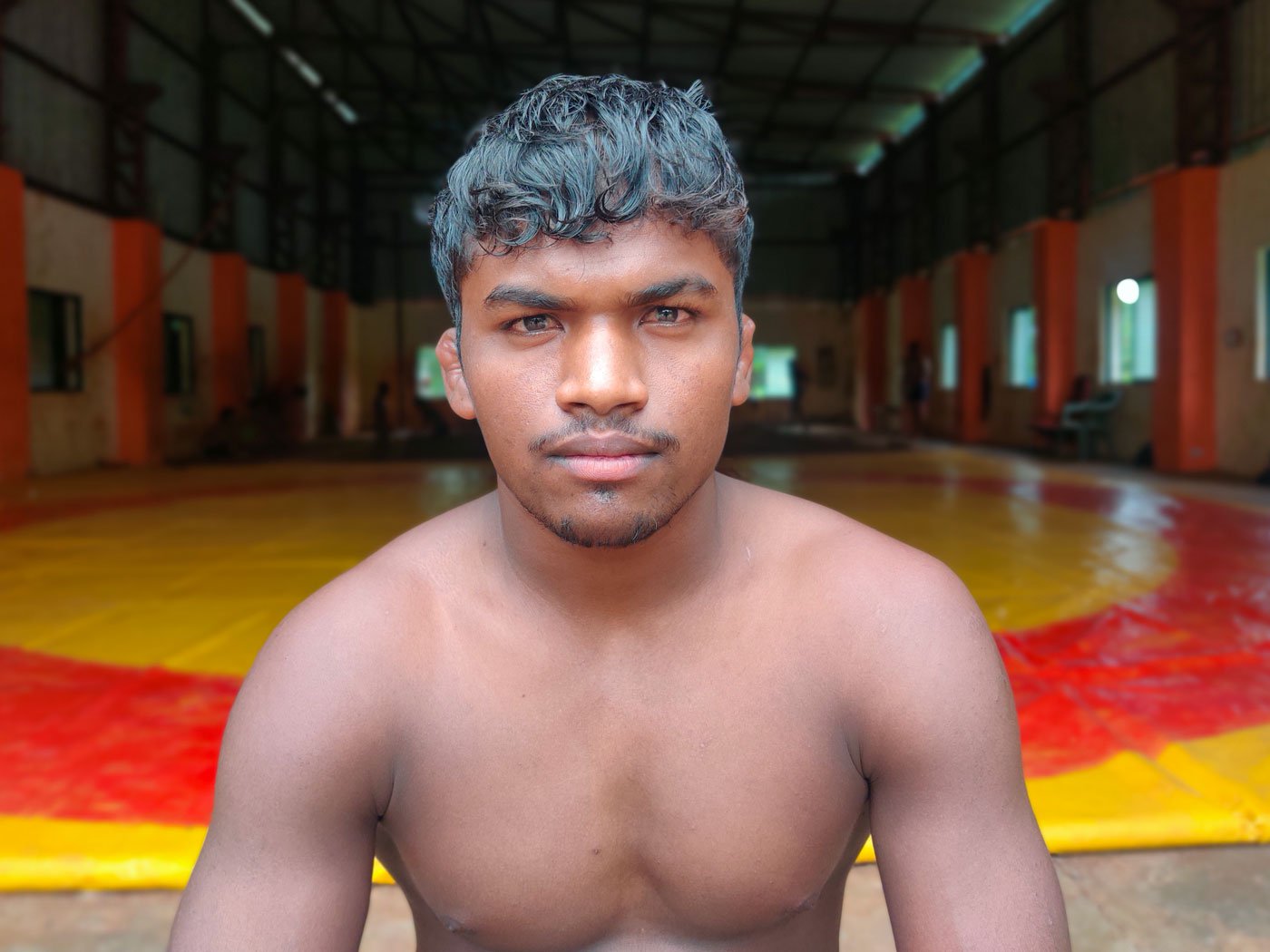 In Osmanabad: dodging and ducking the virus

Rushikesh Ghadge was emotional when wrestler Ravi Dahiya stood on the podium in Japan to receive his Olympic Silver medal on August 5. It had been a while since he had felt such absolute joy.

An aspiring wrestler from Maharashtra’s Latur district, Rushikesh, 20, has had a frustrating 18 months since the outbreak of Covid-19 in March 2020. And the situation is unlikely to change in the foreseeable future. “It is depressing,” he says. “I feel like I am running out of time.”

With a wistful smile, he points out the vexing problem: “How do you practice wrestling and physical distancing at the same time?”

To cheer himself up, Rushikesh keenly watched the Tokyo 2020 Olympics with his friends at Hatlai Kusti Sankul, a wrestling academy on the outskirts of Osmanabad city. When the Games concluded on August 8, India finished with its best ever Olympic tally of seven medals – two of which were won in wrestling.

Dahiya’s silver medal and Bajrang Punia’s bronze – in the men’s 57kg and 65kg freestyle wrestling events respectively – have inspired wrestlers like Rushikesh who belong to families with modest means. Speaking to the Press Trust of India in Tokyo after his win, Dahiya, 23, the son of a tenant farmer from Nahri village in Haryana, said that his family had sacrificed a lot to see him succeed. But his village, which had raised three Olympians, was lacking in basic facilities. “It needs everything… good schools as well as sports facilities,” he said. 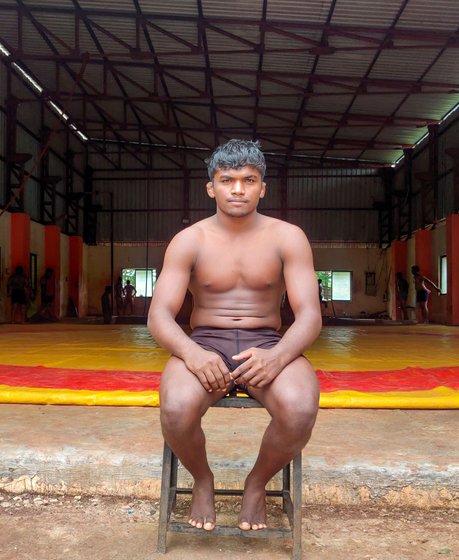 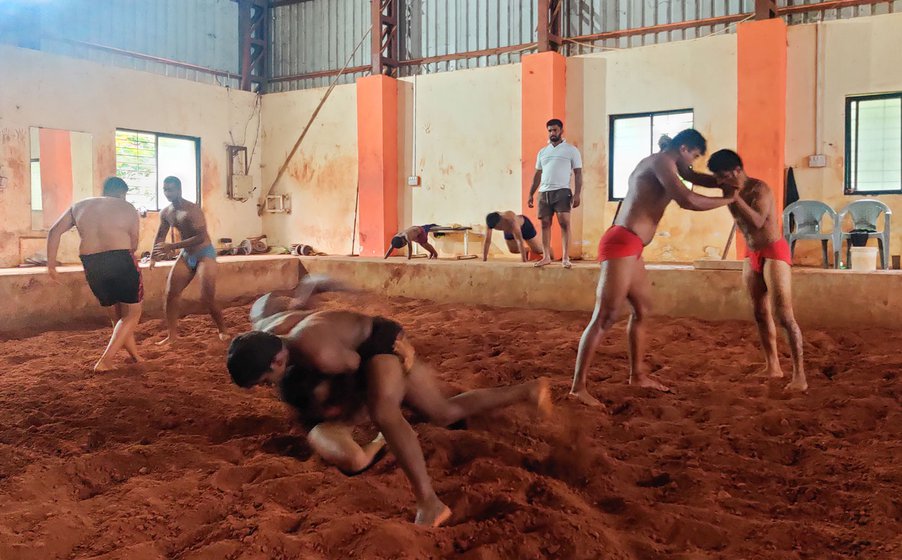 Left: Rushikesh Ghadge moved from Latur to Osmanabad to train in wrestling. Right: Practice session in the wrestling pit at Hatlai Kusti Sankul in Osmanabad

Rushikesh knows what Dahiya is talking about. Three years ago, he left home in Latur’s Taka village to follow his passion for wrestling. “There are no facilities back home,” he says, explaining why he shifted about 65 kilometres away, to Osmanabad. “Osmanabad has good coaches, and I have a better chance here of making it [as a successful wrestler].”

The decision to move was not easy for Rushikesh, who belongs to the Koli community. His father was unemployed and his mother ran the household with her income of Rs. 7,000-8,000 a month from doing embroidery. “Luckily, I found a coach here who let me stay at the wrestling academy’s hostel for free,” he says. “So my mother had to send only a basic amount for my survival [Rs 2,000-3,000]. Things were going well.”

Rushikesh showed great dedication and promise after moving to Osmanabad, says his coach, Kiran Jawalge, 28, who runs Hatlai Kusti Sankul. “He did well in the district-level tournaments. His next step was the national level,” he says. “If you do well in these tournaments, there is a chance of landing a government job through the sports quota.”

But the pandemic brought life to a standstill. Rushikesh’s mother lost work, and the wrestling tournaments – through which he could earn some money – were stopped. “Many wrestlers have dropped out during the pandemic and have taken up labour work,” says Jawalge. “They can’t afford to continue [the training] anymore.” 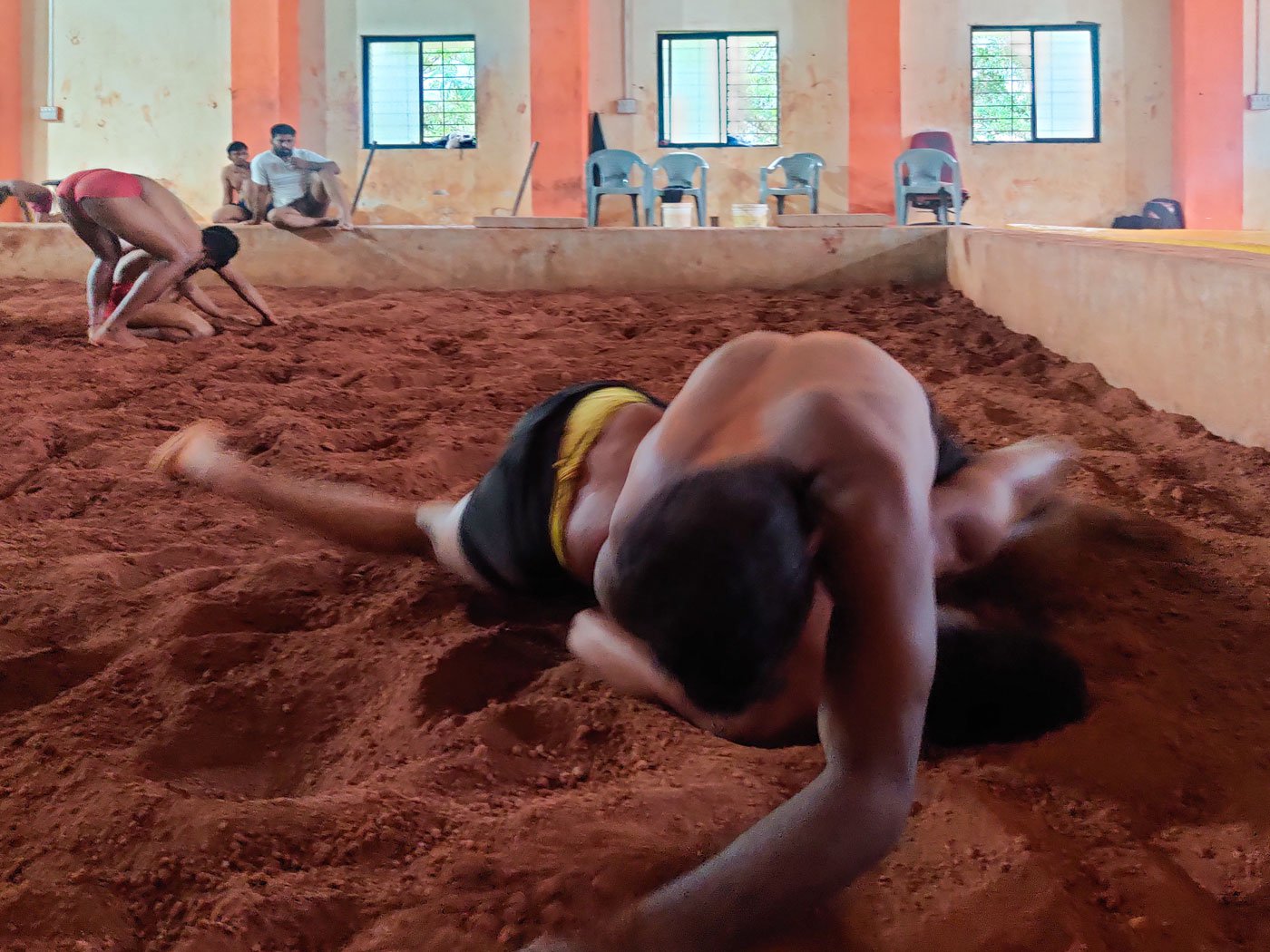 Maintaining a healthy diet is important for a wrestler – and expensive too. “A wrestler eats four kilos of almonds per month on an average,” says Jawalge. “Along with that, he needs 1.5 litres of milk and eight eggs daily. The diet alone costs Rs. 5,000 per month. Many of my students have given up wrestling now because they can’t afford the diet anymore.” From 80 students at his academy, the coach has only 20 coming in now.

Rushikesh is one of the students who haven’t lost hope.

To sustain himself, he goes fishing at a lake near the wrestling academy and sells his catch to nearby eateries. “I have also taken up a part-time job at a garment factory in Osmanabad. All in all, I make about Rs. 10,000 per month,” he says, adding that he keeps Rs. 5,000 and sends the rest home. Rushikesh is also a second-year student of BA at Bharat Vidyalaya in Osmanabad’s Makani village. He has been attending the online lectures on his friends’ smartphones as he doesn’t own one.

Rushikesh’s mother is not aware of her son’s struggles. “My mother is already worried about my future because tournaments are not happening, I don’t want to add to it,” says Rushikesh. “I am willing to do anything to keep my dreams alive. I practice every day so that I am not out of touch when the pandemic ends.” 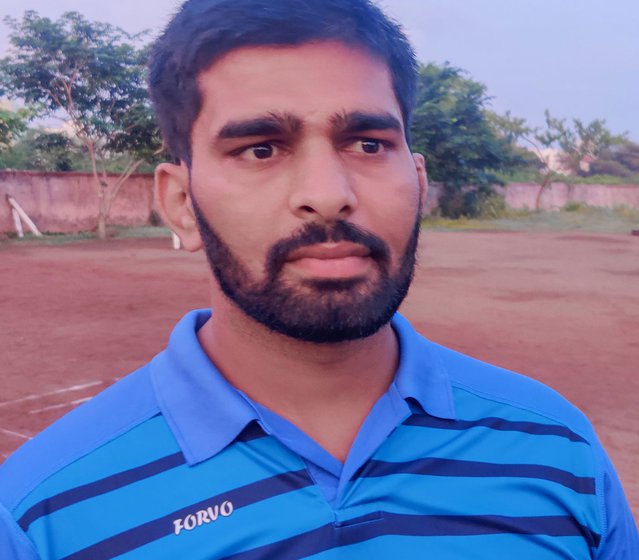 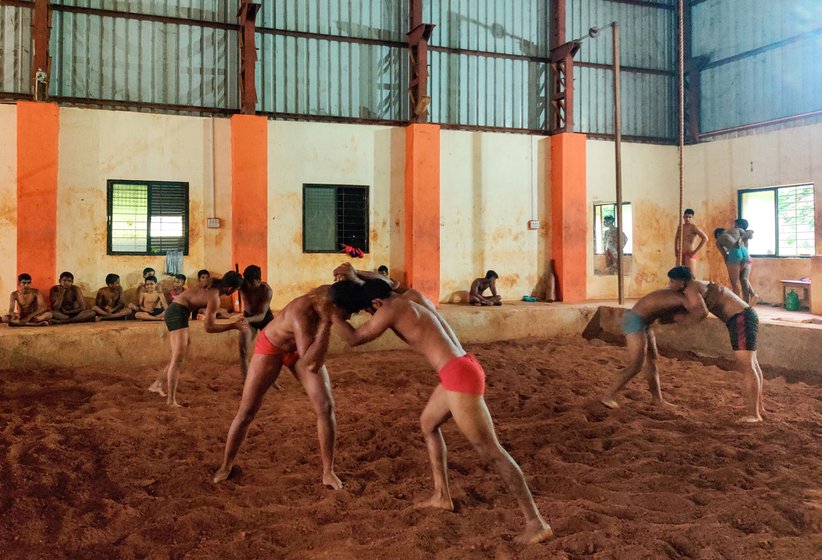 Tournaments used to be a good source of income for aspiring wrestlers says Kiran Jawalge (left), who coaches the Hatlai Kusti Sankul students

Wrestlers across rural Maharashtra – most of them are children of farmers and farm-workers – mirror Rushikesh’s passion. The sport is popular in the state, where thousands, sometimes lakhs , turn up to watch wrestlers battle it out in the wrestling pit.

The akharas (traditional gymnasiums) usually host wrestling tournaments every year, from November to March, for different age groups. “If you do well in those six months, you can earn up to a lakh of rupees in prize money,” says Jawalge. “It helps take care of the expensive diet.” But since Covid-19, this major source of income for wrestlers has dried up. “The problem is, we are only concerned about cricket and to some extent hockey. But some of the traditional games like wrestling and kho-kho are completely ignored,” the coach adds.

Before she was selected on the national kho-kho team, 29-year-old Sarika Kale, from Osmanabad city, had to travel in trains without reservation and stay at community halls while going to play inter-state matches. “We would carry our own food while travelling. At times, we would have to sit next to the toilet in the train because we didn’t have a ticket,” she says.

Kho-kho, a sport with origins in Maharashtra , is popular among the traditional Indian games. Sarika captained the Indian kho-kho team at the 2016 South Asian Games in Guwahati, Assam. She played on the Indian team against England in a bilateral tournament in London in 2018. In August 2020, the Government of India conferred on her the prestigious Arjuna Award. “More and more girls have started taking up kho-kho in the past decade,” says Sarika. 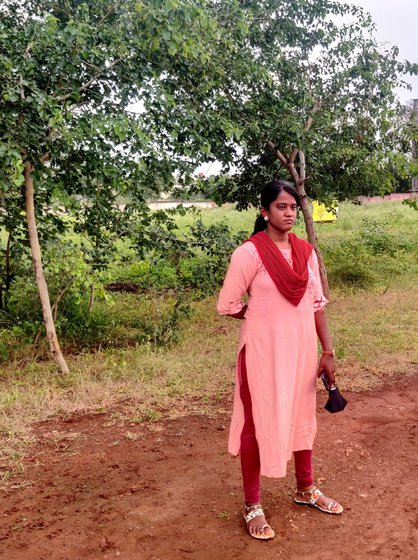 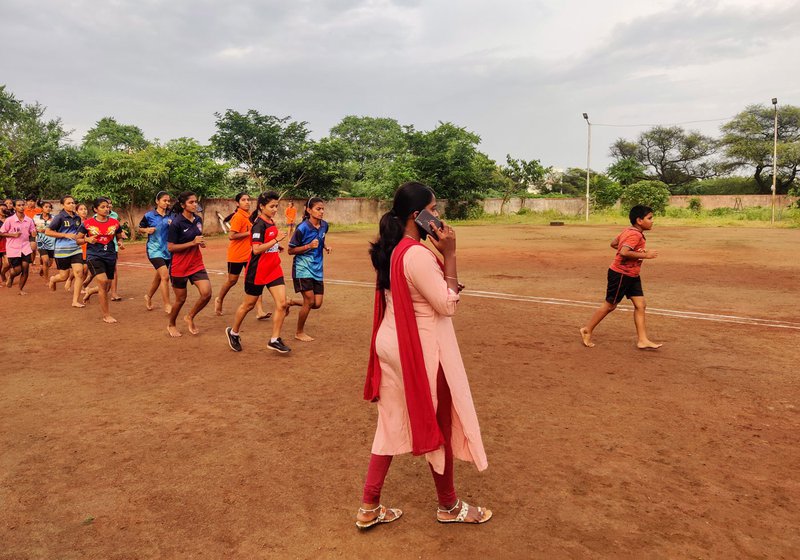 Now working as a taluka sports officer in Tuljapur taluka of Osmanabad, Sarika trains and mentors young players. After the outbreak of Covid-19, she has seen players slowly drop out of training. “Most of them are girls who belong to poor families,” she says. “Girls in villages are not encouraged to take up sports. The pandemic has given parents an excuse to dissuade their children from sports.”

Missing out on training during the pandemic is a critical loss for a young player’s growth, says Sarika. “Practice had completely stopped for five months or so after March 2020,” she says. “When some of the players returned, you could see that their fitness levels had dropped. Then, when we started training from scratch, the second wave arrived. We couldn’t practice again for a few months. We restarted in July [2021]. These on and off practice sessions are not ideal.”

The players competing in age-group tournaments stand to lose without sufficient practice. “An under-14 player will go to the under-17 category without playing a match,” says Sarika. “These are precious years they are losing. A kho-kho player’s performance peaks between the ages 21 and 25, and they are selected at the highest level [national] based on their performances at the age-group level.”

An uncertain future under the pandemic is casting a shadow on the prospects of promising talent, undoing the progress made by sportspersons in rural Maharashtra. 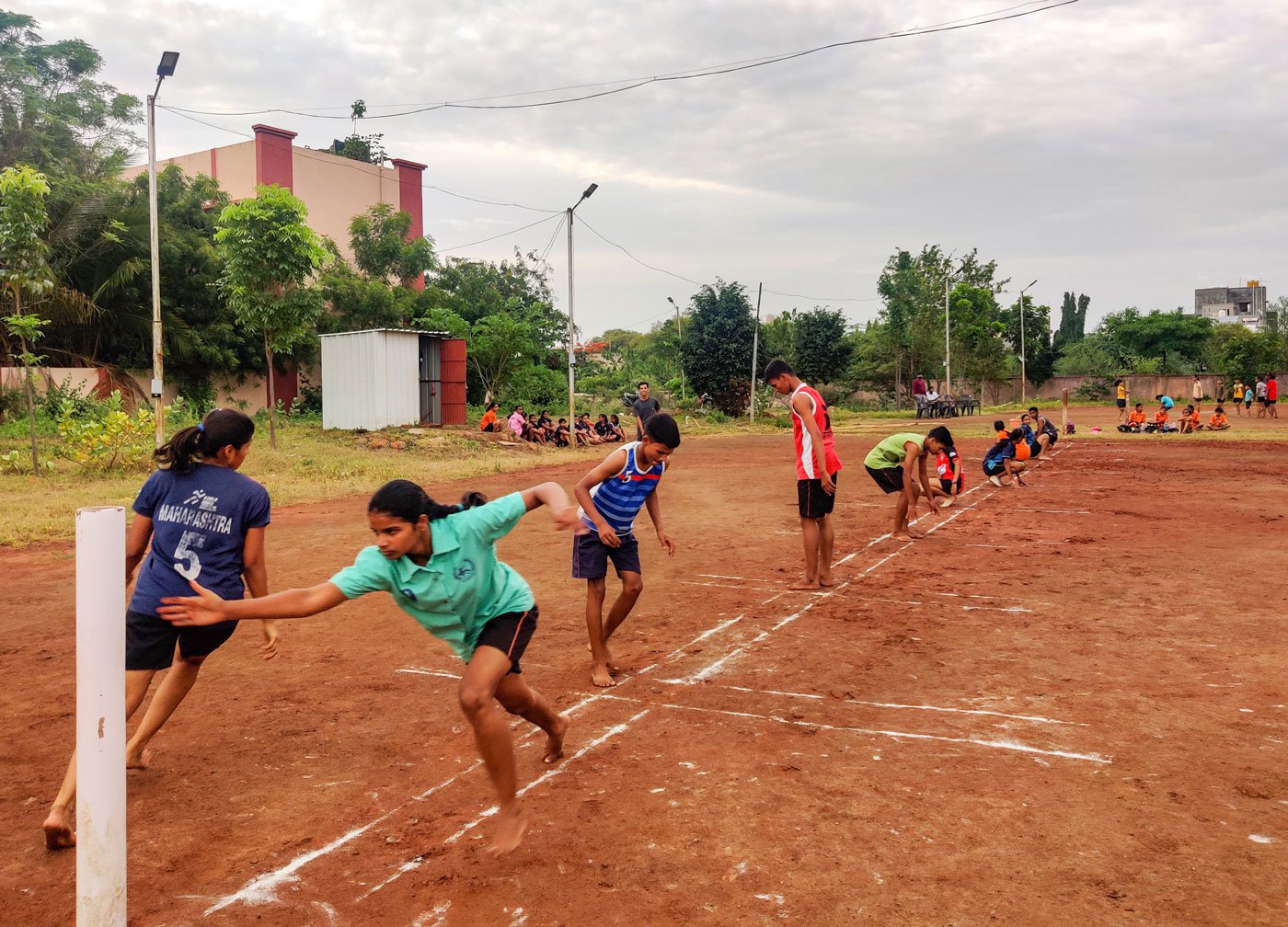 Promotion of kho-kho in Osmanabad district has brought more players to the sport, but Covid-19 is affecting the progress of recent years

When Sarika started playing kho-kho about two decades ago, she had to hide it from her parents because they did not approve. “There is very little institutional support and there are no great facilities in rural areas,” she says. “Families want a safe future for their children – my father also wanted the same for me. We didn’t even have enough food for the family when I was growing up.” Her father worked as an agricultural labourer, and her mother, a domestic worker.

Taking up a sport is more difficult for girls, says Sarika. “The mindset is that a girl should look after her children and manage the kitchen. The idea that she girl would play a sport wearing shorts is too much for a family to digest.” But nothing could deter Sarika from playing kho-kho when she was 10, after she had watched a game for the first time in school. “I remember being fascinated by it,” she says. “I found a good coach who supported me.”

Her coach, Chandrajit Jadhav, is the joint secretary of Kho Kho Federation of India. A resident of Osmanabad, he has played a big role in promoting the sport there and making it a kho-kho hub. There are two coaching centres in Osmanabad city and about 100 schools across the district promote the game. Jadhav says: “Over the last two decades, 10 players from Osmanabad, across the age-groups, have won the best player award nationally. Four women have won the state government's Shiv Chhatrapati Award and I have won it as a sports coach. We also have an Arjuna awardee.”

Sarika has observed a noticeable change in the way people in the villages now regard sports (other than cricket or hockey). “Fewer people think of it as a waste of time,” she says. 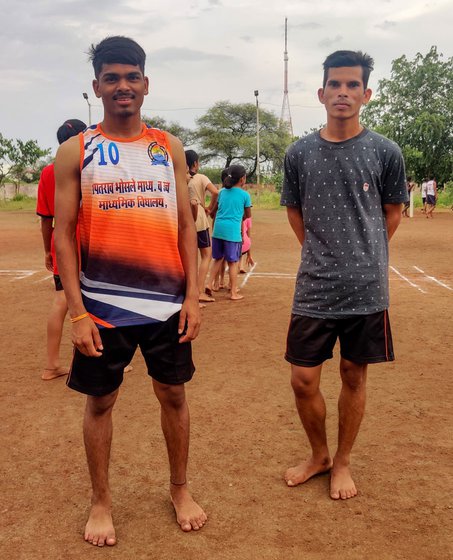 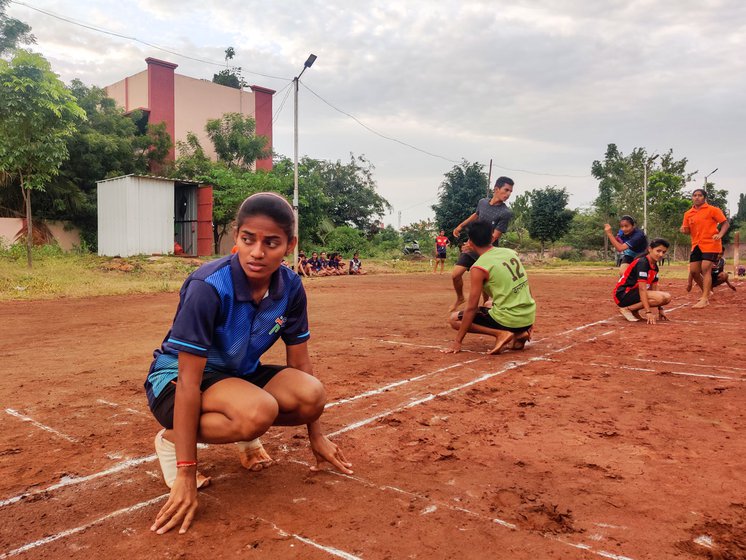 Left: Ravi Wasave (in grey t-shirt) from Nandurbar wants to excel in kho-kho. Right: More girls have started playing the sport in the last decade

The progress is evident from the fact that 19 young people have moved to Osmanabad for kho-kho training – all the way from Nandurbar, a predominantly Adivasi district of Maharashtra, 600 kilometres away. One of them is Ravi Wasave, a 15-year-old from the Bhil Adivasi community. “The atmosphere at home is not conducive for sports,” he says. “Osmanabad has produced several kho-kho champions. I want to be one of them.”

Sarika has no doubt that Ravi could have played at the national level in 2020 had it not been for the pandemic. “I don’t have a lot of time to prove myself,” he says. “My parents have five acres of farmland, which is barren. They make a living by working as daily wage labourers. They have taken a big risk by allowing me to pursue my passion.”

His parents want what’s best for him, says Ravi, who is training at Diet College Club in Osmanabad, but they wonder if he will get anywhere if the situation continues. “They feel it is pointless for me to be away when I can’t participate in a tournament,” he says. “My coaches have reassured them for the time being. But I know they will get worried if tournaments don’t begin soon. I want to excel at kho-kho, appear for the MPSC [state civil service] exams and get a job in the sports quota.”

Ravi wants to walk in the footsteps of Sarika, who is a role model for young kho-kho players across rural Maharashtra. Well aware that she has inspired a generation of kho-kho players, Sarika fears the pandemic’s impact on the sport. “Most of the children don’t have the privilege to wait for the pandemic to be over,” she adds. “So I financially support the talented underprivileged children in the hope that it will help them stay with the sport."


This story is part of a series supported by the Pulitzer Center through an independent journalism grant to the reporter.