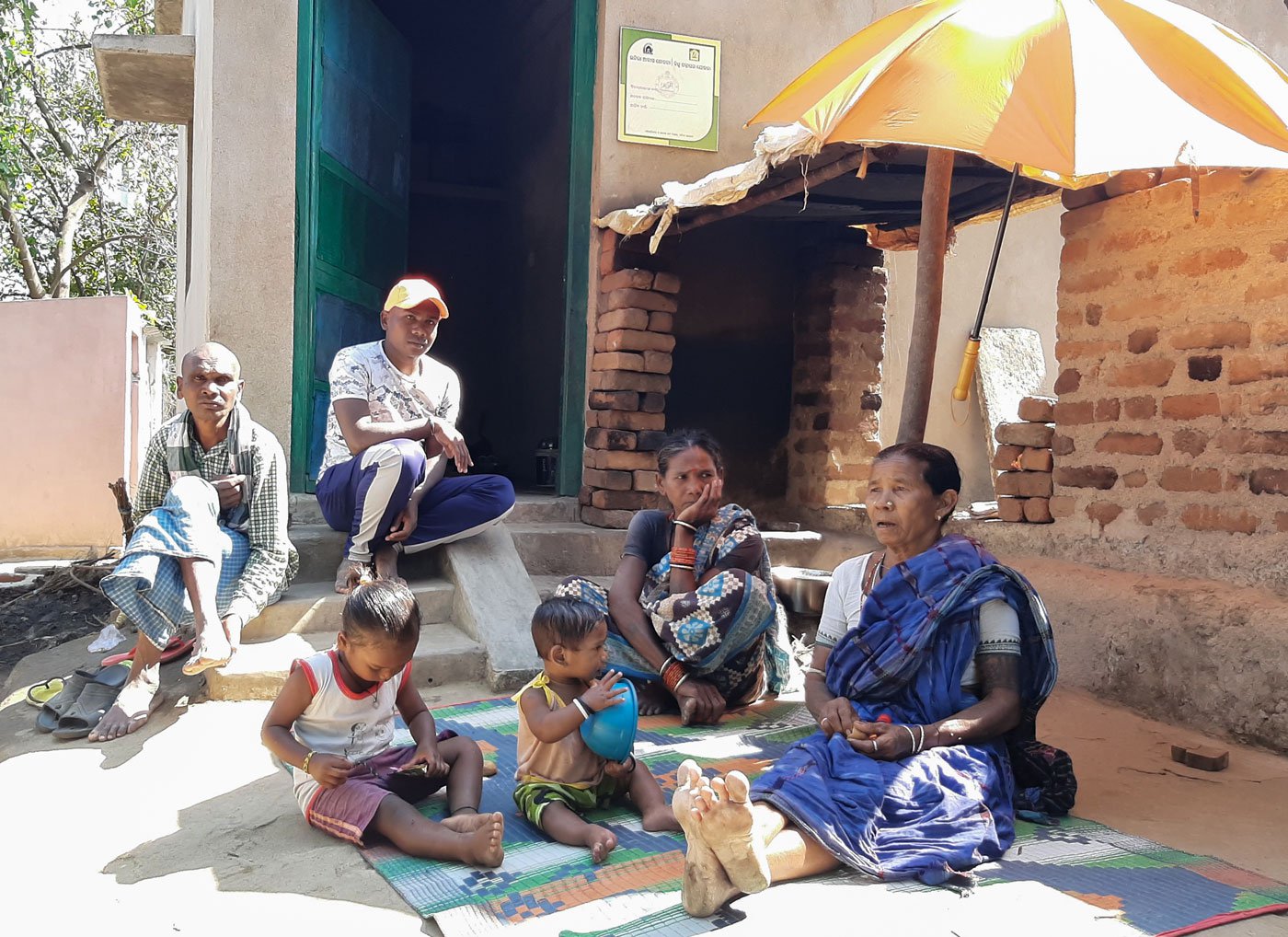 Tulsa Sabar's sudden death, her family’s mounting debts and migration from Odisha to work in brick kilns, tell a story of systemic failure in one of the country's poorest districts

Draupadi Sabar keeps wiping her eyes with the end of her sari, unable to hold back her tears. Her grandsons, three-year-old Girish and nine-month-old Viraj, play quietly near her outside her house in Odisha’s Gudabheli village. Her family members are trying to console the distraught 65-year-old woman who is mourning the death of her granddaughter, Tulsa.

“Whom do we call ‘our daughter’ now?” she asks no one in particular.

Seated on a plastic mat in front of their half-finished brick house in Khariar block of Nuapada district, Tulsa’s family, which belongs to the Sabar Adivasi community, is trying to come to terms with their sudden loss. Her parents – mother Padmini and father Debanand – are worried about their daughter’s infant children, especially Viraj, who was still nursing when she died. “My daughter-in-law Padmini and I are taking turns looking after these children,” said Draupadi.

The children's father, Tulsa’s husband Bhosindhu, is not around. He is labouring at a brick kiln 500 kilometres south, in Rangapur, a village in Telangana’s Peddapalli district. He had gone there in December 2021 with his mother, and Tulsa’s younger sister Dipanjali, to work at the kiln for six months. They were to earn about Rs. 200 per day.

On the night of January 24, 2022, Tulsa Sabar, 25, was at home in Chanatamal village, 20 kilometres from her parents’ house in Gudabheli. She complained of a severe stomach ache at around 8 p.m. “I took her to the sub-divisional hospital in Khariar [town],” says her father-in-law, 57-year-old Dasmu Sabar. “The doctor there said the situation was serious and told us to go to the District Headquarter Hospital in Nuapada. But by the time we reached, Tulsa was already dead.” 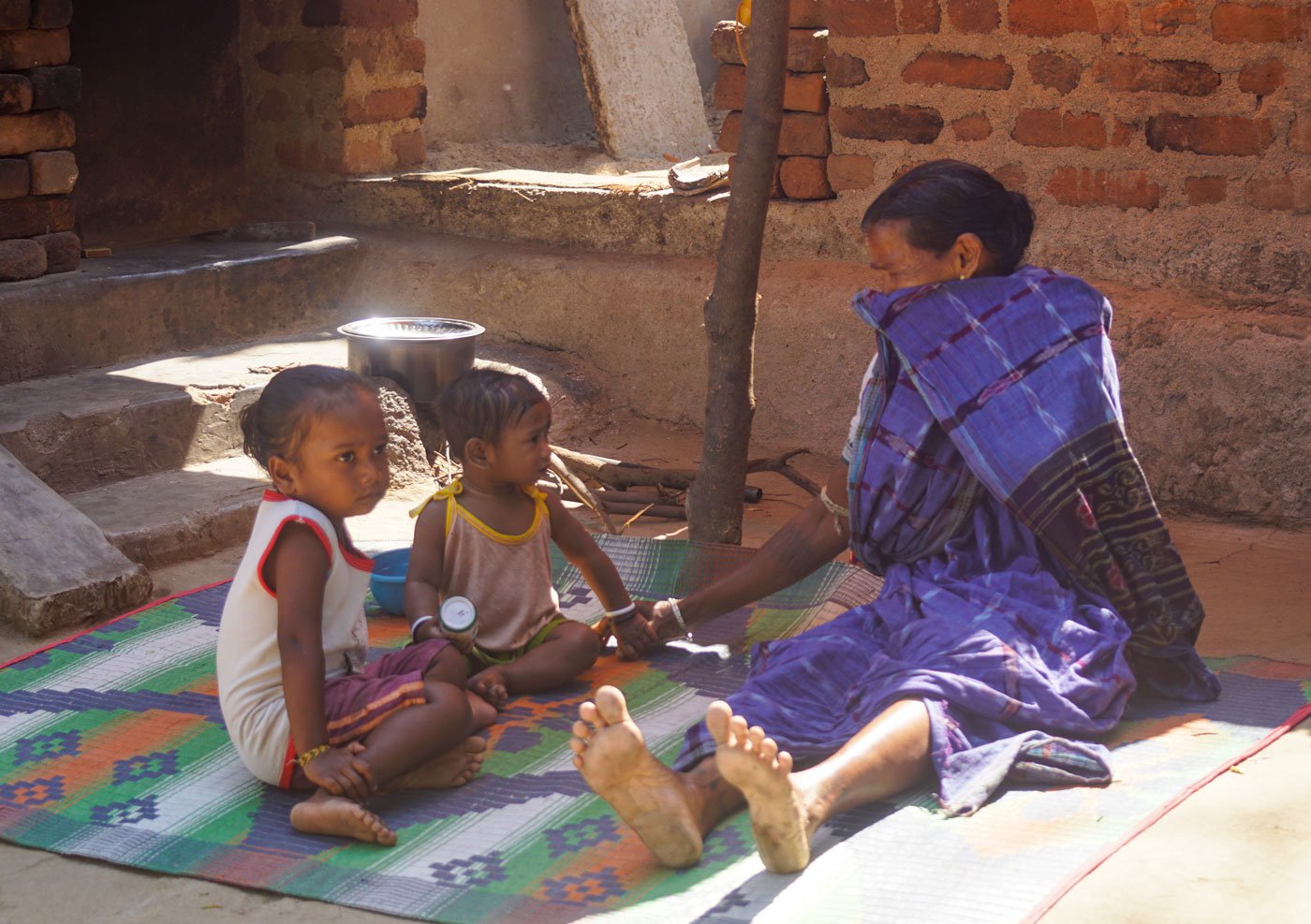 Draupadi Sabar wipes her tears, talking about her late granddaughter Tulsa. Next to her are Tulsa's infant sons Girish and Viraj

The family’s experience of travelling quite a distance to get to a hospital – 20 kilometres to Khariar and another 68 to Nuapada – is not unusual for people in Odisha’s tribal areas trying to access the public health system. A shortfall of specialist doctors across the 134 community health centres (CHC) in these parts of rural Odisha forces people to travel to the block or district headquarters during an emergency.

According to the Rural Health Statistics 2019-20 , at least 536 specialist doctors – physicians, surgeons, gynaecologists and paediatricians – are required at CHCs in Odisha’s tribal areas, but the shortfall is 461. A CHC – the apex health facility in the three-tier rural health infrastructure – serves just under a lakh of people on average here.

For the grieving family, their sudden loss was compounded by the fact that her husband was away in Telangana.

Bhosindhu, 27, could not return to perform his wife’s last rites. “When I told him about his wife’s demise, my son requested the employer for leave, but he was not allowed,” says Dasmu. His appeals to the local labour contractor (or sardar ), to arrange the family’s return from Peddapalli were in vain.

The sardar who had sent Bhosindhu along with about 60 others from the village to the kiln in Telangana, asked the family to refund the advance of Rs. 111,000 he had paid them. The brick kiln owner would ask for it, he said, passing on the blame.

Like Bhosindhu, many from Nuapada's Sabar community (also called Shabar) migrate for work, either for short or long periods, or seasonally, especially when they have large expenses to fund. Almost half of the district is covered by forest, and traditionally the Adivasi communities here have depended on income from selling non-timber forest produce (NTFP) like mahua flowers and char seeds (chironji). They also practice subsistence farming of rain-fed crops. However, forest produce is non remunerative, and farming of rain-fed crops has been severely affected by droughts and insufficient rainfall. Irrigation is almost non-existent in the district. 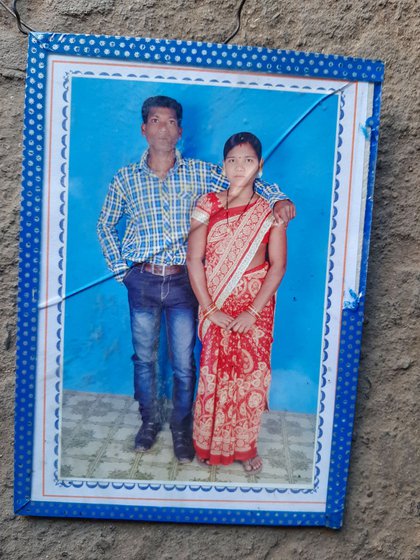 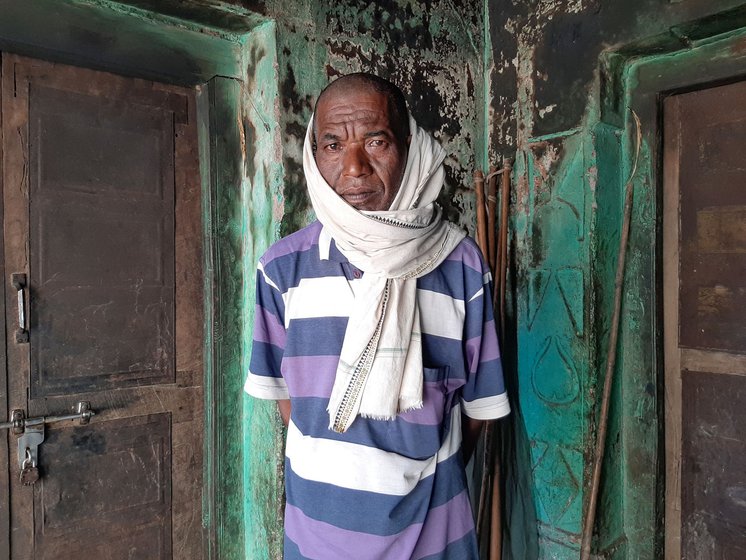 Left: A framed photo of Bhosindhu and Tulsa. Bhosindhu was away, working at a brick kiln in Telangana when Tulsa died. Right: Dasmu Sabar at his home in Chanatamal

“After the kharif season when regular agricultural work is not available, our only hope is MGNREGA, but the delayed payments force us to look for other options,” says Dasmu about his family’s experience under the Mahatma Gandhi National Rural Employment Guarantee Act scheme. “My son and my wife had worked in a road improvement project, but their wages are yet to be paid. The total outstanding amount is about 4,000 rupees,” he says.

Employment options are few even in the kharif season (June-October), says Rabindra Sagaria, Dasmu’s neighbour. “That’s why young people from this area migrate from November every year,” he adds. Nearly 20 out of the 60 people from the village who went away to work this time are young, he says.

Only 53 per cent of Nuapada’s Sabar community (also called Shabar) is literate, well below rural Odisha’s average of 70 per cent. Those with some school education find their way to Mumbai, but the others pledge the combined labour of the family to earn daily wages at brick kilns, where they carry hot bricks on their head for 12 hours a day in inhuman conditions.

The local sardars arrange for unskilled workers to find employment at brick kilns for a fixed period of about six months, paying them a portion of their total wages in advance. Bhosindhu’s family needed the money to complete the construction of their house, so they enlisted for the job.

Dasmu says that they were allotted a house under the Pradhan Mantri Awas Yojana (Gramin), “but the sanctioned amount of 1.3 lakh rupees was not sufficient to complete it.” The family had saved their MGNREGA wages of Rs. 19,752, which they received until June 2020, but they still needed over a lakh of rupees. “We took a loan, and to repay it, we needed the money from the sardar ,” he says. 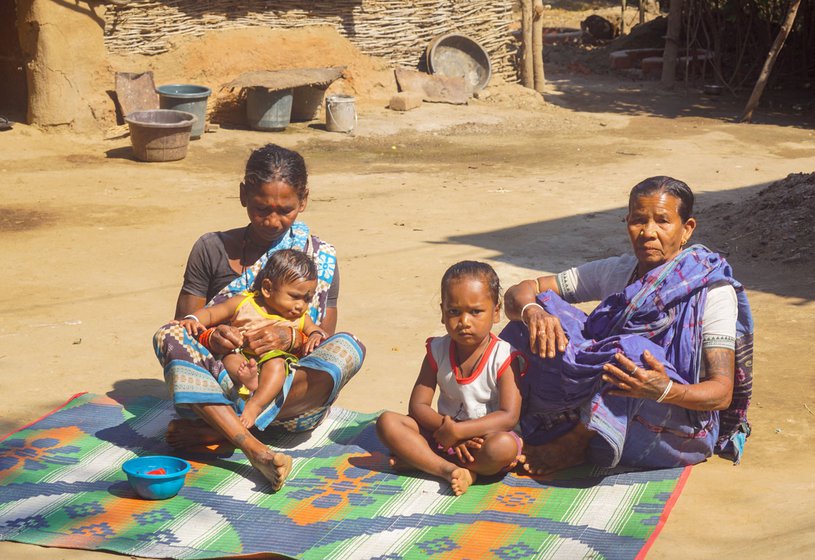 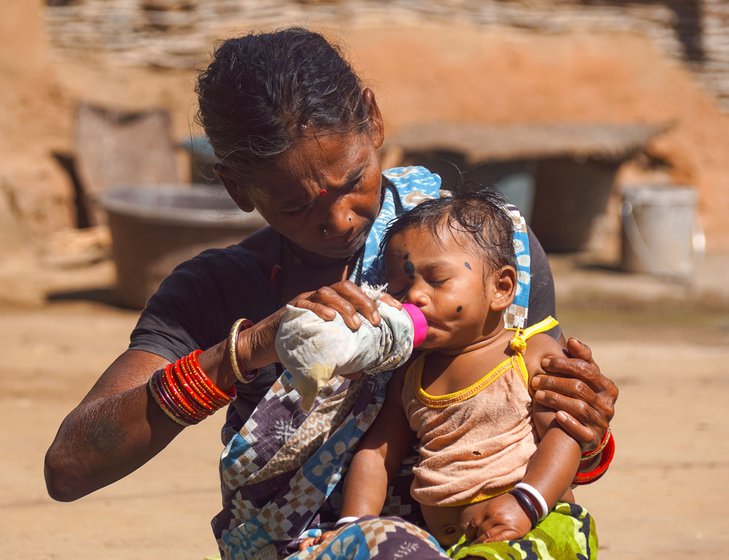 It was not the family’s first loan in 2021. Tulsa’s pregnancy had been difficult, making her ill, and Viraj was born prematurely. In the first three months after the birth, the mother and baby were treated at two hospitals – the District Headquarter Hospital in Nuapada and the Veer Surendra Sai Institute of Medical Sciences and Research in Sambalpur, 200 kilometres away.

“We pledged our one and half acres of land for 35,000 rupees and Tulsa took a bank loan of 30,000 rupees through her self help group (SHG) for the medical expenses,” says Dasmu. It was to repay their debts that the family had taken the advance from the contractor and gone to Telangana in December last year.

Nuapada is one of the poorest districts in Odisha. People from here and other southern and western districts of the state migrate to work in Andhra Pradesh, Chhattisgarh, Tamil Nadu and Karnataka, says a study on internal migration in India. About five lakh workers migrate from Odisha, of which two lakhs are from Balangir, Nuapada, Kalahandi, Baudh, Subarnapur and Bargarh districts, it adds, citing data gathered by a local NGO.

Noted activisit Ranjan Panda, the founder of Water Initiative Odisha based in Sambalpur city, has closely observed the issues of migrant labour. “People of this region are facing risks and vulnerabilities for multiple interrelated factors, especially climate change,” he says. “There has been constant degradation of natural resources and a failure of local employment schemes.”

“You might have seen her. She was beautiful,” said Draupadi tearfully about her granddaughter.

Before her death, Tulsa was going from village to village in Arada gram panchayat , canvassing for the 2022 panchayat elections in the state, (held from February 16 to 24). Chanatamal, a predominantly Adivasi village, falls in Arada panchayat , and she was contesting in the samiti election. The seat was reserved for a woman candidate from a Scheduled Tribe, and Tulsa was a popular choice as she was the only Adivasi woman in her village to have finished school and she was also leading a self help group. “Our relatives encouraged her to fight,” says Dasmu. 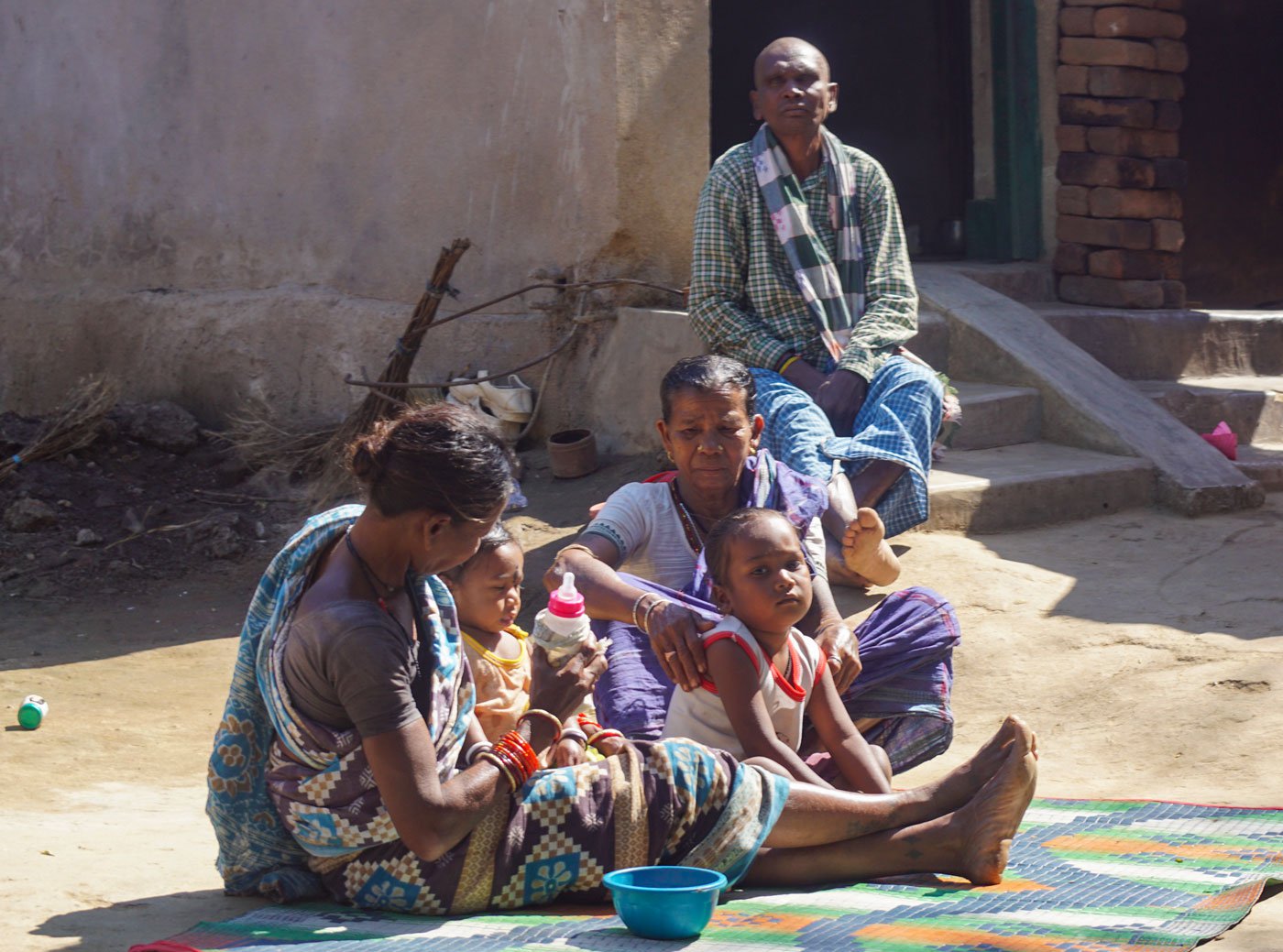 Tulsa's father Debanand at the doorstep of the family's home in Gudabheli. He and the others are yet to come to terms with their loss

Draupadi had advised Tulsa against standing for the elections. “She had regained her health just six months ago, so I was against it,” said the distressed grandmother. “She died because of that.”

Migration impacts elections too said local leader Sanjay Tiwari, who stood for the post of sarpanch in Khariar block’s Bargaon gram panchayat . The number of voters decline, especially from the poorer sections, he said. More than a lakh migrants could not vote in in Nuapada district, he added, estimating that 300 were from Bargaon.

“We claim that elections are celebrated as festivals in our country, but for migrants like Bhosindhu and his mother who are not even allowed to return home to perform the last rites of their nearest and dearest, it means nothing,” said Tiwari.

“Where did you go my dear? Why did you leave us?”

Draupadi’s words for Tulsa echo those of the larger community.

Postscript: A week after Tulsa’s death, journalist Ajit Panda tweeted about the family’s situation, tagging the official handles of Odisha’s chief minister, Nuapada’s district collector, and the commissioner of police of Ramagundam. The police tracked Bhosindhu, his mother and Dipanjali within 24 hours, and the brick kiln owner was told to send them to Raipur, Chhattisgarh. The kiln owner insisted that Dipanjali remain there to ensure that the other two would return, but he finally yielded to official pressure and let them leave.

The three members of Tulsa’s family were picked up from Raipur by the sardar who had sent them, and brought by train to Kantabanji station in Odisha’s Balangir district , around 25 kilometres from their home in Chanatamal. Dasmu says they were asked to sign a blank sheet of paper at the railway station, agreeing that they would return to work at the same brick kiln to recover the money that had been paid in advance .

Other stories by Ajit Panda