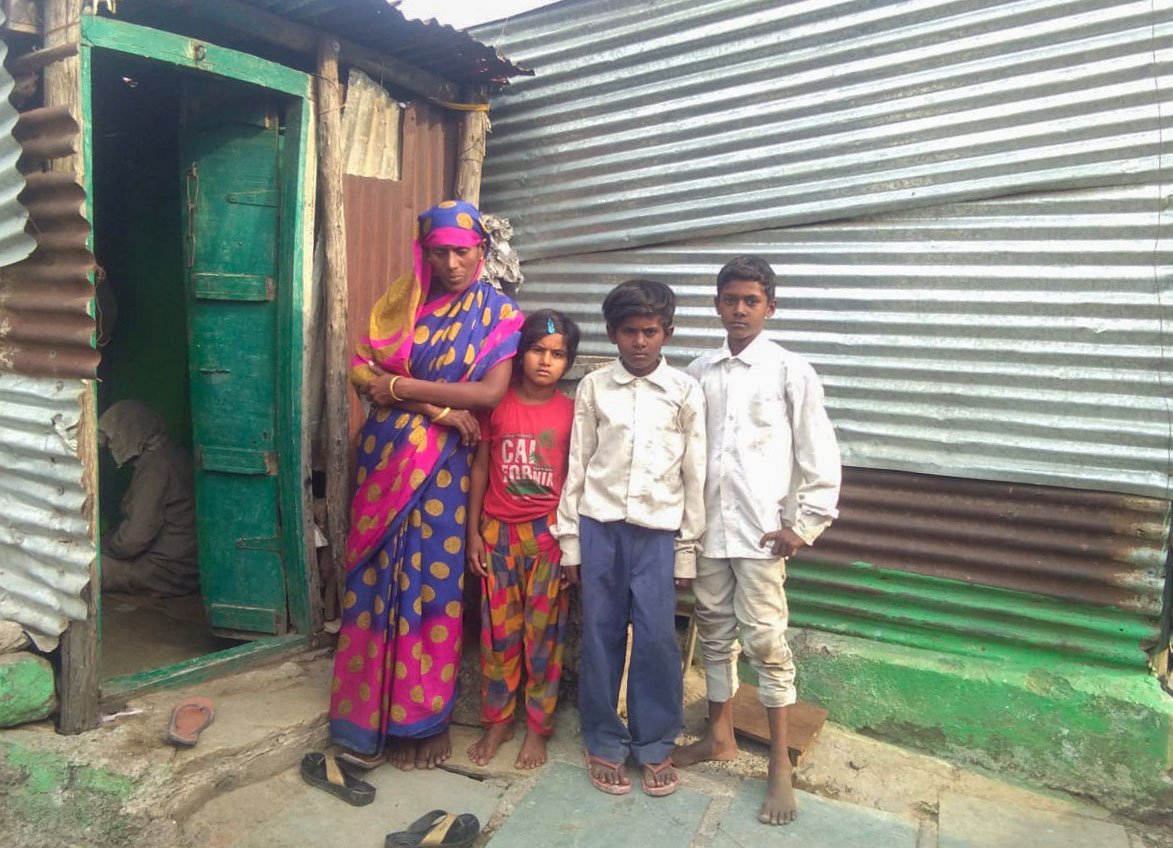 In Marathwada, women living on their own, like Azubi Ladaph and Jehedabi Sayed, struggle to earn an income. Along with social exclusion, the pandemic and discrimination are making it harder for them

“Nobody was ready to employ me. I took all the precautions, but they wouldn’t let me enter their homes,” says Jehedabi Sayed, 68, a domestic worker in Maharashtra’s Latur city. "I never took off this kapada [cloth mask], and followed all the rules like maintaining distance.”

In April 2020, during the Covid-19 lockdown, four out of five families that Jehedabi had been working for told her to leave. “I was left with only one and they overburdened me with work.”

Jehedabi has been a domestic worker for more than 30 years – many of them spent doing dishes and cleaning floors in the homes that closed their doors to her last year. She believes that her employers were influenced by the controversy surrounding the Tablighi Jamaat religious congregation at a Delhi mosque in March 2020, which had become a Covid-19 hotspot. “The whispers telling people to stay away from Muslims travelled like fire,” she remembers. “My son-in-law said I lost the jobs because of the Jamaat. But how am I related to it?”

From earning Rs. 5,000 a month, Jehedabi’s income fell to Rs. 1,000 then. “Will the families who asked me to leave never call me back?" she asks. "I worked for them for many years and then, all of a sudden, they abandoned me and hired other women.”

Her situation has hardly changed in year. “It has become even more bekaar [miserable],” says Jehedabi. In March 2021, she was working in three homes and earning Rs. 3,000 a month. But two of her employers let her go in April, when the second wave of Covid-19 started spreading across Maharashtra. “They said that I live in a slum and we don’t follow the rules [safety protocols] there.”

So now, she’ll earn only Rs. 700 a month from her sole employer until she finds more work. 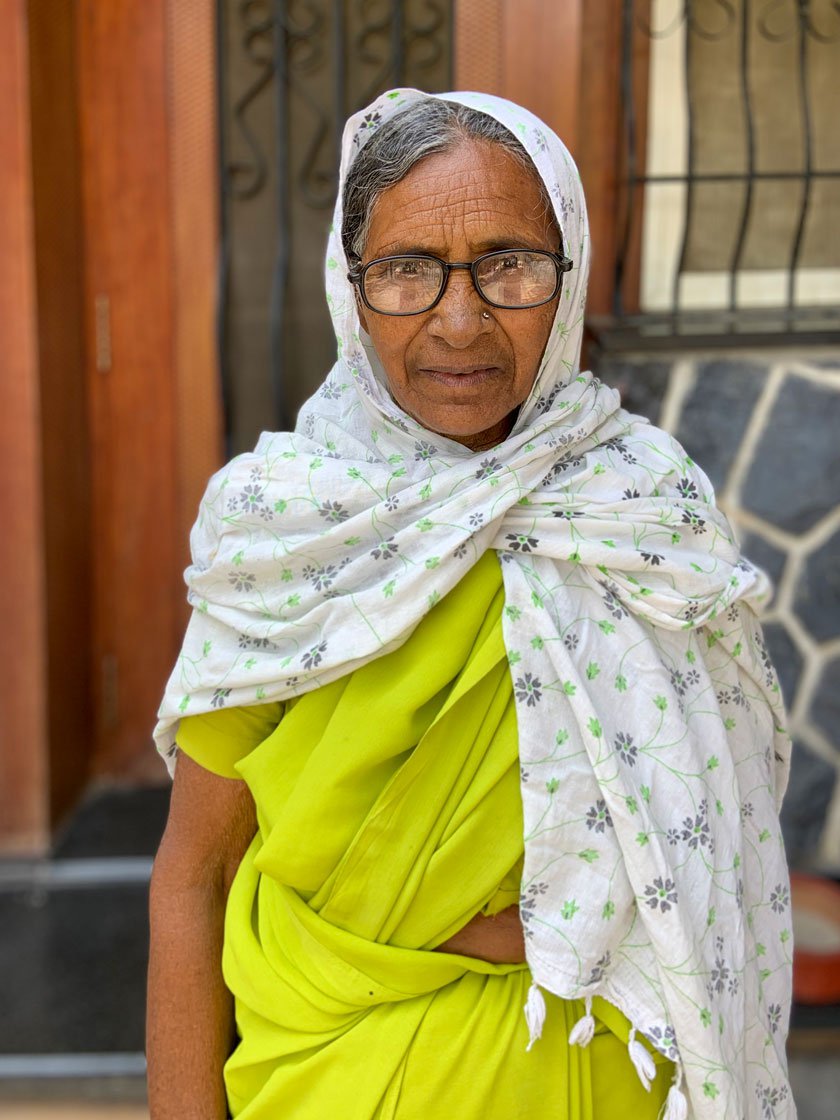 Jehedabi Sayed has been a domestic worker for over 30 years

A widow living on her own in Latur’s Vitthal Nagar neighbourhood, Jehedabi has been struggling to manage without a steady income in the past year. Her house, which is in her husband’s name, is just a room with kitchen. It has no electricity or a washroom. Her husband, Sayed, died of an illness 15 years ago. “I had three sons and a daughter. Two of my sons died a few years ago. The youngest is a construction worker. I haven’t met him since he got married and shifted to Mumbai in 2012.” Sultana, her daughter, lives near Vitthal Nagar with her husband and children.

“Where we stay, which community we belong to, everything has become a problem. Kaise kamana? Aur kya khana? [How do I earn, what do I eat?]. This disease is very discriminatory,” says Jehedabi.

The pandemic has been hard on senior women like Jehedabi, living on their own, and harder on widows like Gausiya Inamdar, whose five children, of ages 6 to 13, are dependent on her.

Since mid-March this year, 30-year-old Gausiya, a farm worker in Chivari village, Osmanabad district, hasn’t been finding much work because of the restrictions implemented to curb the second wave of Covid-19.

Before March 2020, Gausiya was earning Rs. 150 a day doing farm work. But during the lockdown, farm owners from Chivari and Umarga, in Osmanabad’s Tuljapur taluk , called her only once a week or so. “This illness [Covid-19] made us starve for days. I was worried for my children. How could we survive with Rs. 150 a week?” she says. The rations sent by a local NGO helped her during those days.

Even after lockdown restrictions were eased, Gausiya could earn only about Rs. 200 a week. Others in her village, she says, were getting more work. “Every woman from my family was finding it difficult to get work. But from June-July [2020], some women from my mother’s neighbourhood were getting work at least thrice a week. Why didn’t we get it when we put in equal effort?” To earn some money, Gausiya rented a sewing machine and began stitching blouses and saree falls.

Gausiya was married when she was 16 years old. Her husband died of an illness five years ago. Her in-laws blamed her for his death  and forced her to leave their home with her children. Gausiya and her children were also denied a right in her husband’s share of the family property in Chivari. She took her children to her parents' home, also in Chivari. But her brother, who lives there, couldn’t afford to take on the expenses of six more people. So she left the house with her children and moved into a makeshift structure on a piece of land owned by her parents on the outskirts of the village.

"There are a very few houses here," says Gausiya. "In the nights, drunken men from a bar next to my house used to trouble me. They would often come into the house and physically abuse me. It was miserable for the first few months, but I had no option." The harassment stopped only after healthcare workers in the village intervened to help her. 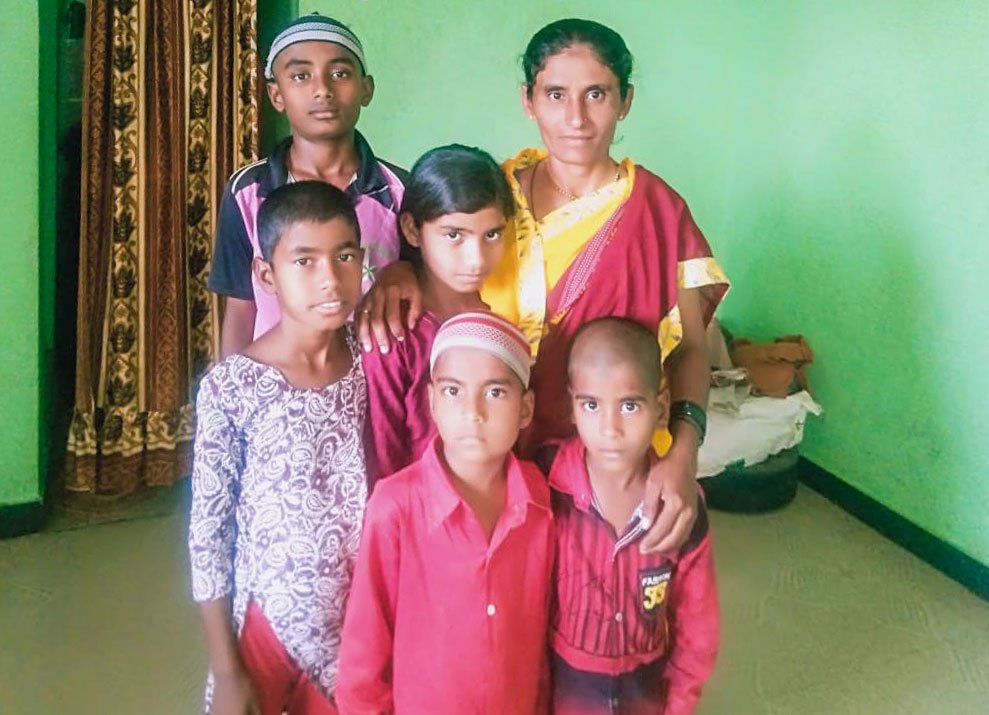 Gausiya Inamdar and her children in Chivari. She works as a farm labourer and stitches saree blouses

Making ends meet is tough for Gausiya even now. “I don’t have enough sewing work – just one customer in two weeks. Women are not coming to get anything stitched because of Covid. This is like a nightmare again,” she says. “Are we going to be trapped in this fear of corona and unemployment forever?”

In April 2020, Azubi Ladaph’s in-laws evicted her with her four children from their home. It happened a day after her husband, Imam Ladaph, died. “We lived in Umarga in a joint family with Imam’s parents and elder brother’s family,” she says.

Imam, a daily wage earner, had been ill for a few months before his death. His kidneys were damaged from his alcohol addiction. So in February last year, Azubi, 38, left him behind in Umarga town and took her children with her to Pune to look for work.

She found work as a domestic helper, earning Rs. 5,000 a month. But when the Covid-19 lockdown began, she decided to leave the city with her children, of ages 10 to 14, and go to Naldurg village in Tuljapur taluk , where her parents live. She hoped to find some work there. “We started walking from Pune on March 27 last year and walked for nearly 12 days to reach Naldurg,” says Azubi. The distance is about 300 kilometres. “We barely ate a proper meal on the journey.”

But when they reached Naldurg, they found out that Imam was critically ill. So Azubi and her children left immediately and started walking to Umarga, 40 kilometres from Naldurg. “Imam died that evening, after we reached,” she says.

On April 12, with the help of their neighbours, Imam’s parents and brother forced Azubi and her children to leave. Her in-laws claimed that they were a health risk because they had come from Pune. “We took refuge in a local dargah that night and then went back to Naldurg,” says Azubi.

Her parents were in no position to look after Azubi and the children. Nazbunabi Dawalsab, Azubi’s mother, says, “Her father and I are daily wage labourers. We hardly find any work. The money we earn is not even sufficient for the two of us. We were helpless.” 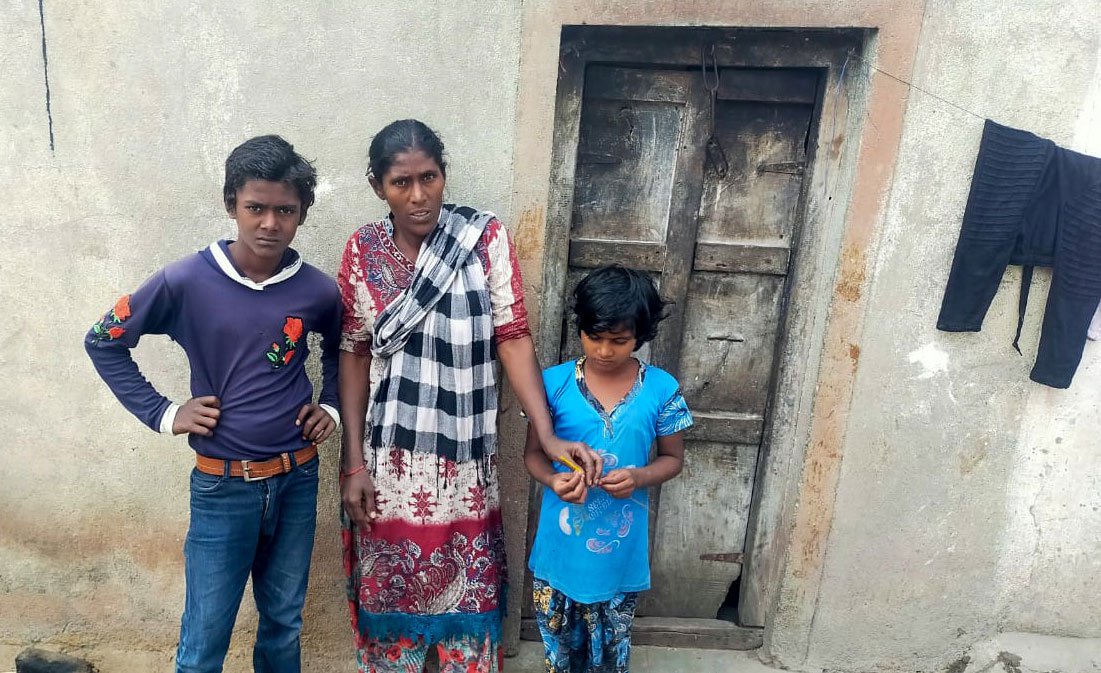 Azubi Ladaph with two of her four children, in front of their rented room in Umarga

“I couldn’t trouble my parents with the burden of the five of us,” says Azubi. So she moved back to Umarga town in November. “I rented a room that costs me 700 rupees a month. I do dishes and wash clothes now, and earn Rs. 3,000 per month.”

After her in-laws forced her out, local newspapers covered Azubi’s story. “I was not in a condition to speak. I can’t describe how traumatising it was,” she says. “Government officials and political leaders came to meet me at my mother’s place in Naldurg and promised financial help. But I still haven’t received any help.”

Neither Azubi nor Gausiya or Jehedabi have ration cards. They also don't have a bank account under the Jan Dhan scheme, the central government’s financial inclusion programme. Through a Jan Dhan bank account, they would have received Rs. 500 per month in the first three months of the lockdown (April-June 2020). “I can’t go to the bank and spend so much time there,” says Jehedabi, adding that she doesn't feel confident of receiving help there. The bank is three kilometres away from her house.

Gausiya is eligible for Maharashtra government’s Sanjay Gandhi Niradhar Pension Scheme, through which widows, single women and orphans receive financial assistance. She gets Rs. 900 per month as pension, but only when it comes – she didn't receive it from January to August 2020. “It would have reduced my burden during the lockdown,” she says. She's been getting it off and on since then – in September and November 2020, then in February 2021.

Social exclusion and the lack of financial support make survival a challenge for single women like Jehedabai and the others. “They are deprived of land and a house, and funding their children’s education is another cost burden. They have no savings. Unemployment during the lockdown led to starvation in such families,” says Dr. Shashikant Ahankari, chairperson of HALO Medical Foundation, based in Andur, Osmanabad district. The organisation works to strengthen rural healthcare and provides vocational training to single women in Marathwada.

The new wave of Covid-19 is intensifying the women's struggles. “Ever since I got married, everyday was a struggle to earn and feed children. The pandemic has been the worst time of my life,” says Jehedabi. And the lockdown makes it worse, says Gausiya. “Not this illness, but our everyday struggle during lockdown will kill us.”