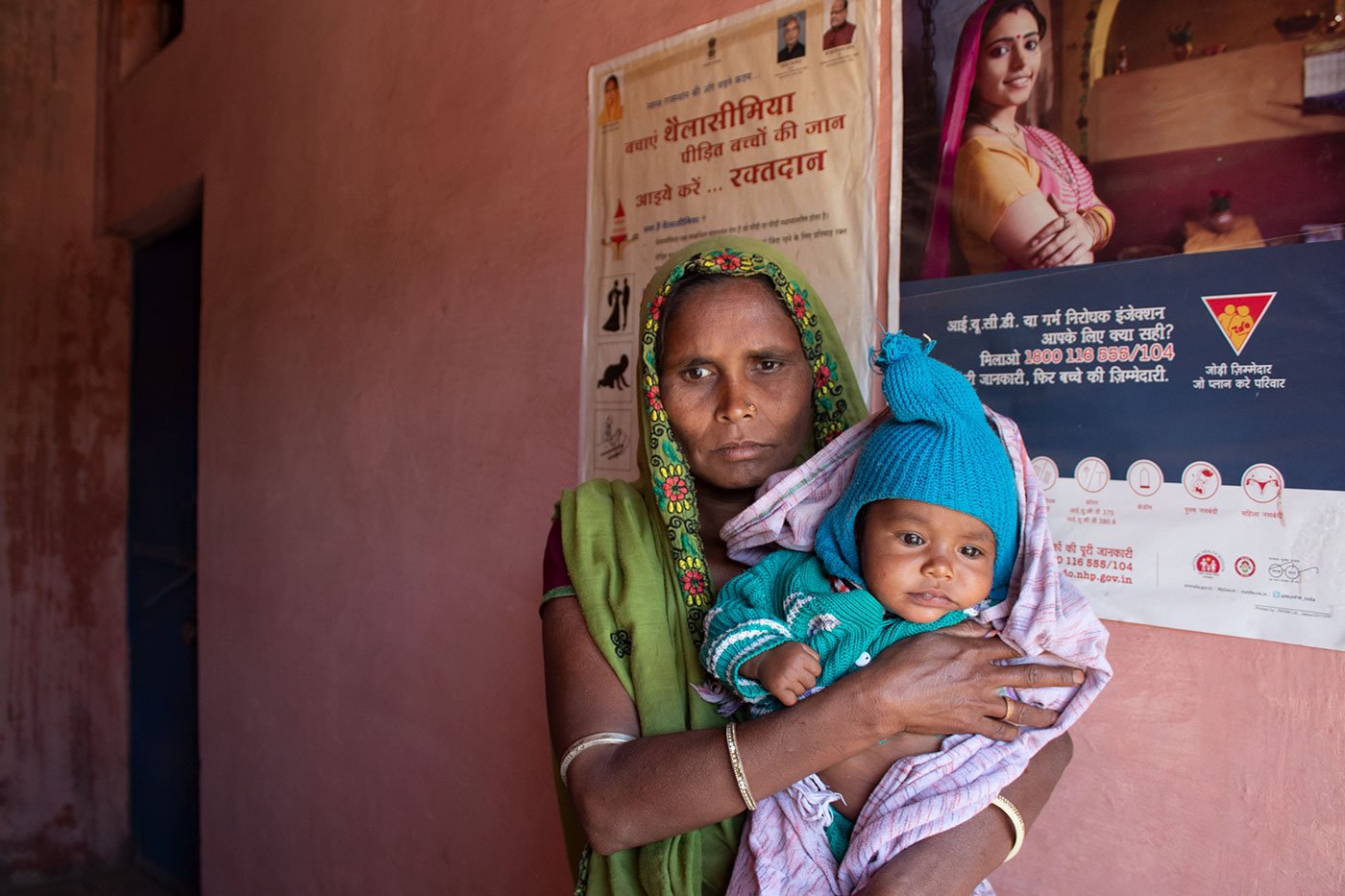 ‘He says I'm even more cursed than my mother’

In Banswara district of Rajasthan, a state that ranks low on gender indicators, women endure multiple deliveries due to the social pressure to have a son. But these views are slowly being challenged

Hira Ninama and Kalpana Rawal, both 35 years old, are separated by 15 kilometres but united in their desire for a son. “What good are daughters for their parents?” asks Hira, when I meet her in Sewna village of Banswara district. “It is good to have an heir – at least one boy,” says Kalpana, from Waka village in the same district of Rajasthan.

Over seven years, since 2012, Hira, who works as an occasional agricultural labourer and homemaker, has given birth to six girls. Her youngest is only a couple of months old. “I was not told that my [sixth] baby was a girl. But when I heard my mother-in-law cry, my tears began to flow. I cried even harder than my husband,” she says.

“Since my second daughter [was born], I have been going to a babaji . He recites some chants over a coconut. Then I break it open and have the water. But he says I am even more cursed than my mother,” she adds with a sigh, the youngest of five daughters herself.

Hira is from the Bhil Adivasi community in Sewna, a village of 1,237 people, and is unlettered. She and other women here who survive multiple births often pay a hefty price in terms of their health – she looks much older than her 35 years, is weak, has constant body aches, and is battling emotional distress too. 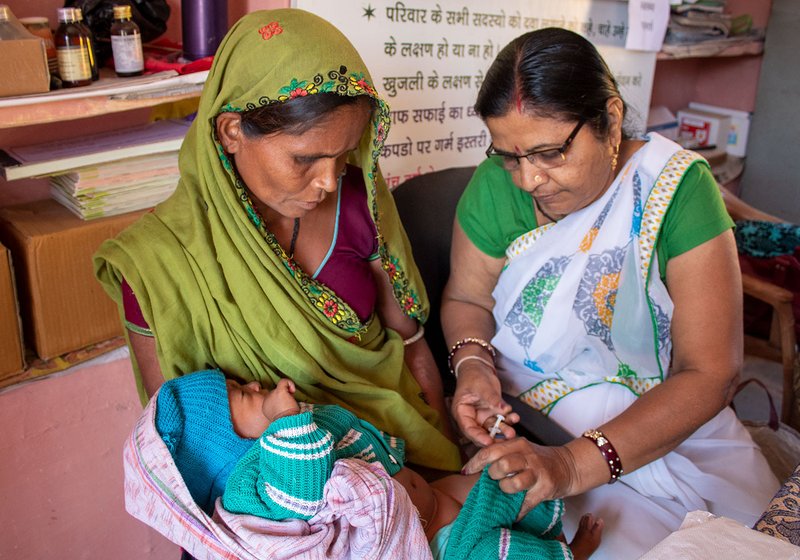 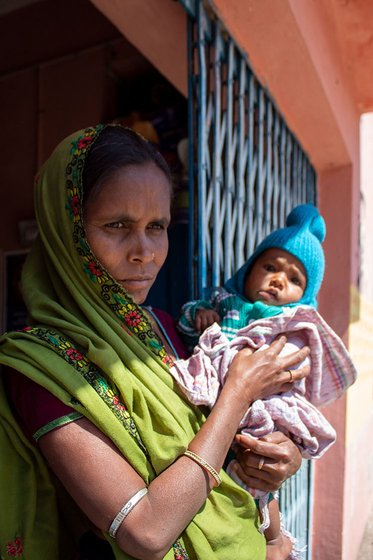 Niranjana Joshi, the ANM at the Sewna health sub-centre, administers the first set of vaccines to Hira Ninama’s sixth daughter

The state also ranks poorly on most parameters of the UNDP’s Gender Empowerment Measure of the ability of women to participate in economic and political life and their command over economic resources. A 2009 report by the Ministry of Women and Child Development finds that Rajasthan has had “consistently low achievement” on the UNDP’s Gender Development Index too, which measures disparities between men and women in health, education and economic resources.

Hira though refuses to accept that she might not be responsible for determining the sex of her children, says Niranjana Joshi, the auxiliary nurse and midwife (ANM) at Sewna’s health sub-centre and Hira’s go-to health resource. She is resigned to the physical and verbal abuse her husband Khema, an agricultural and construction labourer, heaps on her and accepts that he ignores their daughters.

In Hira’s and Kalpana’s home district of Banswara, where three-fourths of the population is Bhil, there are 980 women for every 1,000 men. This is much higher than the state’s average of 928 women per 1,000 men (Census 2011), but only slightly more than half of the district’s population is literate (56.33 per cent), compared to Rajasthan’s average of 66.11 per cent. And while close to 7 in 10 women in the state have had some education, in Banswara this number dwindles to 4 in 10. 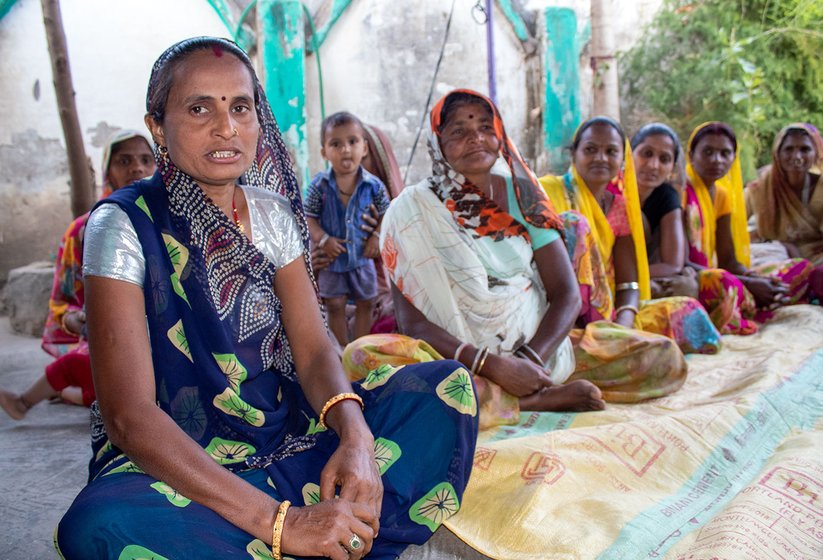 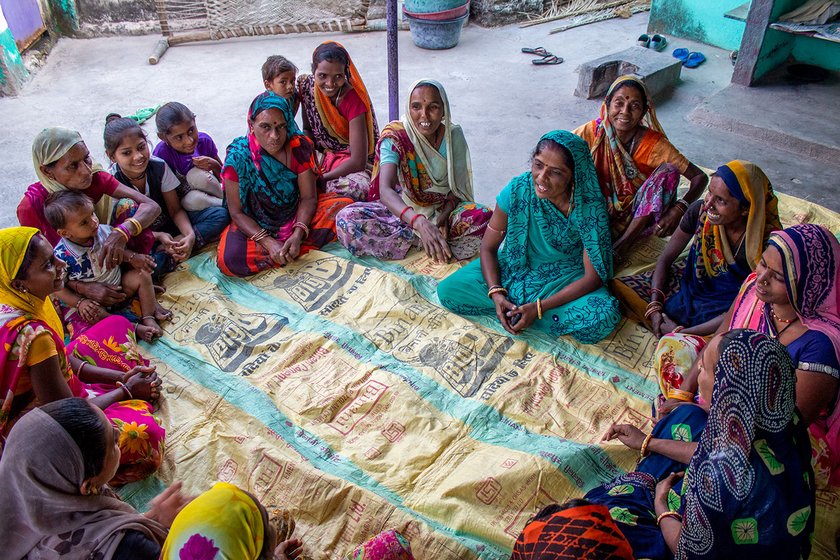 Kalpana Rawal (in the blue saree) leads a group in her village to promote women’s health, but education and awareness don’t always spell better health for women

Over time, these ingrained views are being challenged by Kalpana and others. Kalpana, who is from the Rawal community (listed as a Scheduled Caste in Rajasthan),  has studied till Class 8 and  lives in Waka, a village of 1,397 people in Banswara district’s Ghalkiya panchayat . She heads the recently-formed local branch of Tajo Parivar (roughly ‘healthy family’ in the local Bagadi language), a group of 25 women trying to create more awareness about maternal health in their communities. Tajo Parivar was set up in December 2018 as part of the  ‘Apna Swasthya, Apni Pehel’ (Our Health, Our Initiative) of the Delhi-based research and training centre PRIA (Participatory Research in Asia). It disseminates information about maternal health, and works to improve child and adolescent health and strengthen panchayats .

Tajo Parivar’s work is informed by studies which establish that women display ‘poor health-seeking behaviour’ in communities that accord low priority to their well-being. A March 2018 study by PRIA with 1,808 women in two blocks (Banswara and Govindgarh) found that almost 7 in 10 women in Banswara had no one to turn to for counselling on maternal and child health, while one-third of the women had no money for emergency healthcare. And more than 3 in 5 of the women had no control over decisions regarding their health and nutrition.

“Our people live in scattered habitations. We go from door to door distributing condoms, calling out for immunisation, speaking about simple methods to prevent infections, and so on,” says Kalpana, explaining Tajo Parivar’s work. Such groups are now active in 18 panchayats of Banswara and Govindgarh blocks. On an average, each group has 20 members, all volunteers.

Kalpana, who is also an ‘MGNREGA mate’ (appointed by the state government to register people for work under the scheme), says that women suffer in silence. “They will not even call an ambulance if it is late in the night. Instead of going to the PHC [which is around three  kilometres away in Ghalkiya], they trust the jhola chaap [local uncertified medical practitioner] who leaves medicines at a provision store in the village,” she says. 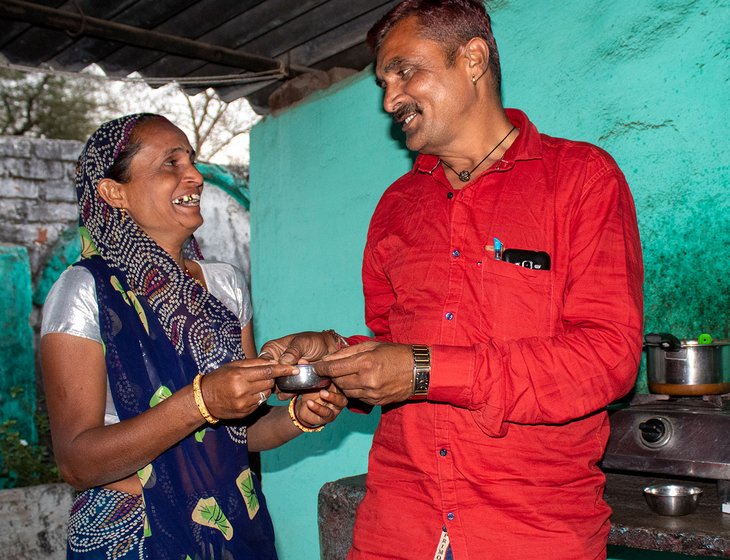 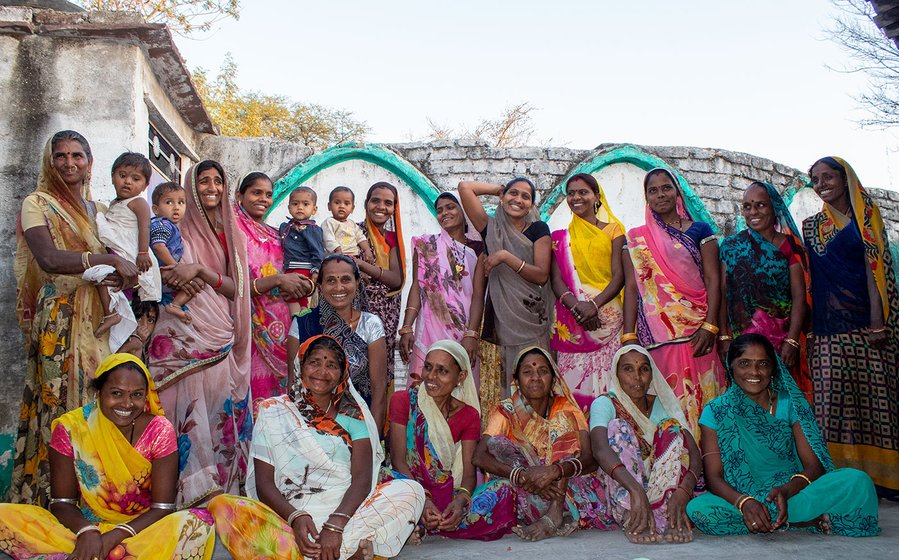 Left: 'I know being childless is not my wife’s fault', says Gorakh Nath, Kalpana's husband. Right: Members of the Tajo Parivar in Waka village

But education and awareness don’t always spell better health for women. As Kalpana’s own experience illustrates, the bigger challenge of changing perceptions is multi-layered and difficult. Married for 20 years, she and her husband Gorakh Nath (also an ‘MGNREGA mate’) are childless – a status that has led to bitter arguments within Gorakh Nath’s family about their eligibility for a share in three bigha s [1 bigha is 0.40 acres] of ancestral farmland.

Both Kalpana and her husband underwent tests to find out why they weren’t able to have children. The tests showed there were no physiological issues for Kalpana, though Gorakh Nath’s test results pointed to a low sperm count.  Yet, this knowledge has not kept her from thinking that her husband could have offspring if he gets married again. “Why should I object if my husband were to re-marry? It will be good to have a successor, at least one boy,” she shrugs.

Gorakh Nath thinks otherwise. “I know being childless is not my wife’s fault,” he says. “I have never thought of re-marrying. I do not care if she insists. Elders in the community and in my family believe that only women are responsible for bearing children. But I know that both parties should stay equal [are equally responsible].”

However, he sees the work of creating awareness and changing perceptions as primarily the responsibility of women. “Men hesitate to talk about such issues [like child birth] to women,” he adds. “It is best that women do the work.”

Kalpana though knows that only the community as a whole can turn around such perceptions. “We have to become our own leaders,’ she says.