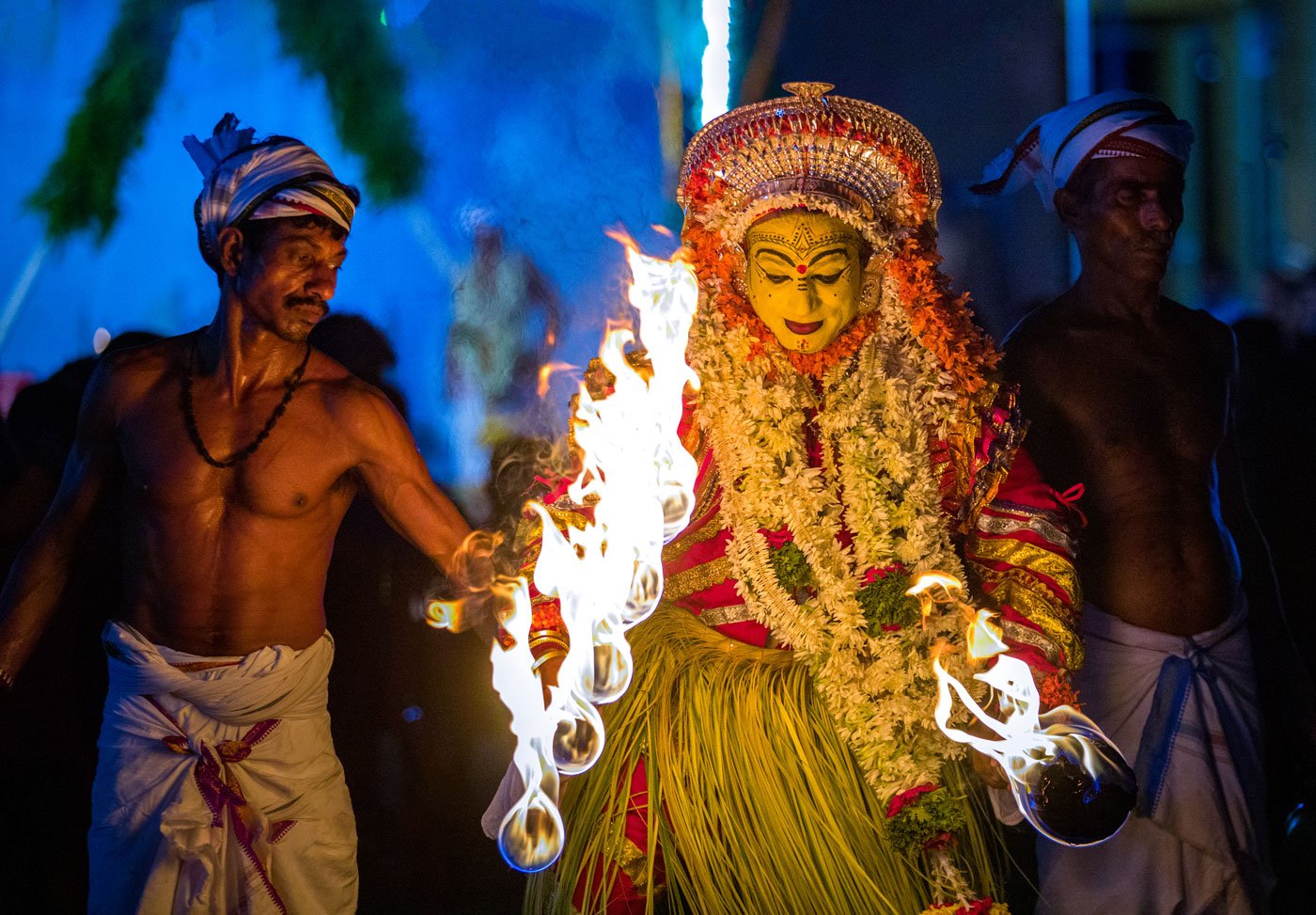 Everyone had gathered in the yard of a large house in Permude village to witness the metamorphosis of the dancer into Kordabbu Daiva. He was a sight to behold – in his elaborate costume, ornaments and bright yellow face paint.

The rituals began with the host, the owner of the house, ceremoniously offering oil to the impersonator for a ritualistic bath. The daiva applied make-up while a member of his family recited the paddanas , oral epics about the origins and prowess of the daiva – Kordabbu is a local cultural hero from a Dalit community. It was around 10:30 at night.

Once ready – with neckpiece, bangles, crown, a mask made of bronze and silver, an elaborate halo-headpiece made of wood, metal, tender coconut leaves, flowers, shells, bamboo and cloth, with fire torch in hand and bronze anklets on his feet – Kordabbu Daiva danced.

This was over a decade ago, in Mangalore t aluk in Dakshina Kannada district, and I don’t recall the name of the performer. But Dayanand Kathalsar of Paduperar village in the same taluk , who is an impersonator-performer, recently told me, “If you believe in the daiva , it will deliver relief….”

That night, over a decade ago, the dancer jumped around, furiously, vigorously, to display his power. He asked the d ani (host) why he had been called. A member of the impersonator’s family holds a fire torch and the daiva symbolically washes his hand in the fire. "Sometimes they walk on glowing coals or run through the fire or ‘swallow’ flames from camphor. All of this is done to create an atmosphere of fear and awe,” says Kathalsar. 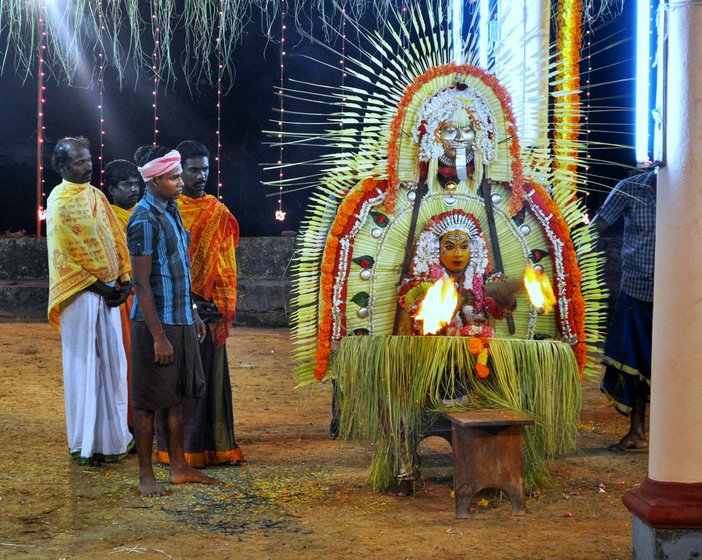 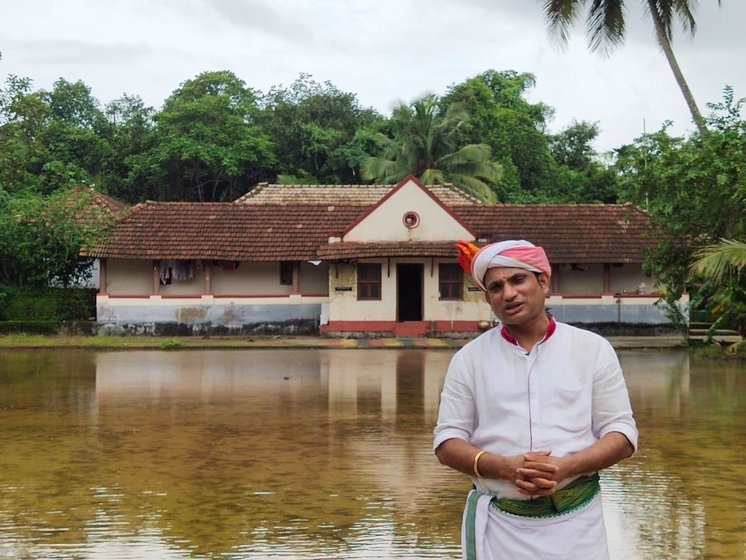 In this ritual performance, dancers assume the divine form of daiva s like Kordabbu Daiva (left). Dayanand Kathalsar (right) is one such performer

A member of the host family then offered him tender coconut, raw rice, live chickens, sugarcane, and other food. In such performances, once the daiva is 'pacified' with the offerings, at the end of the dance, he sits with a hand-held fan, while people come to him for blessings in the form of kumkum and pingara (areca nut flower) and ask him for solutions to their troubles – about their family’s land disputes, hopes of a good harvest, marriage prospects, health issues, and more. The daiva – now as an oracle – pronounces predictions and prescriptions. “He provides relief by giving solutions to the various problems faced by the people who attend the k ola [performance or event],” Kathalsar says.

Kathalsar himself performs around 75 to 100 times during the k ola season between December and May. The events are popular mainly in Dakshina Kannada and Udupi districts of Karnataka. A senior impersonator can get paid, by the hosts and other offerings, between Rs. 15,000 and Rs. 50,000 for 2 to 3 performances on consecutive days or nights in the same yard, hosted by the same family. During such events, sometimes different impersonators, the daivas traditionally specific to that area, perform.

“I observed my pijjere [great grandfather], then my ajjere [grandfather], and later I assisted my ammere [father] during his performances,” Kathalsar says. “I have grown up around the kola and have always been interested in this art form. I started with a small part and eventually I impersonated almost all daivas in my family.”

Each family, explains 44-year-old Kathalsar, who is also president of the Karnataka Tulu Sahitya Academy, and a former postman as well as a former radio host (for a devotional show), has its own ‘stock’ or repertoire of daivas – and must impersonate only these. “It is a hereditary practice, so it remains the same within the family.” 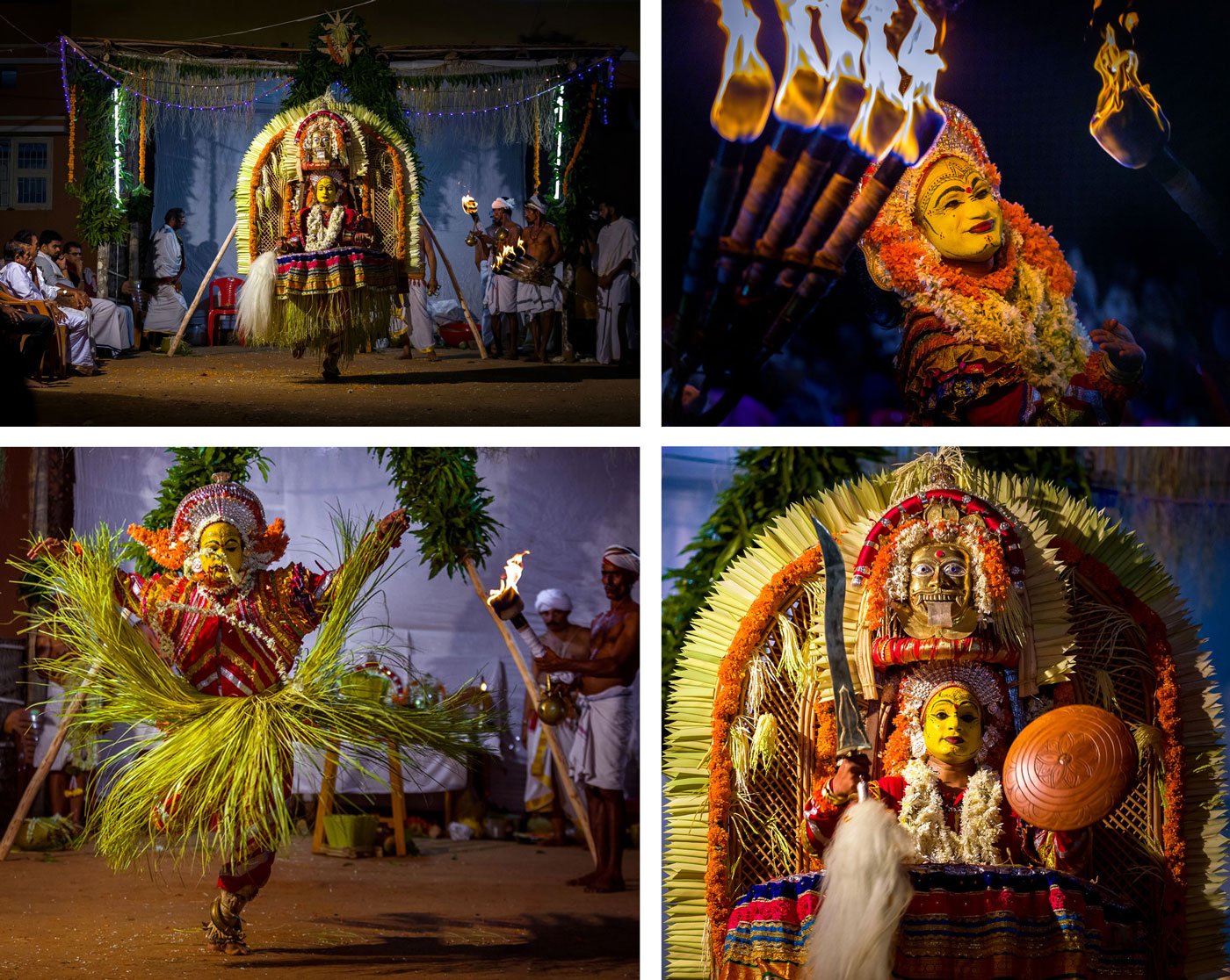 'I started with a small part and eventually I impersonated almost all daiva s in my family,' says Dayanand Kathalsar

Kathalsar makes a distinction between daivas and bhutas , though some use the terms interchangeably – those that originate in the p rakriti s hakti (natural forces) or divinity must only be called d aiva , he says. And forms that originate from ancestral or animal sources can be called either daiva or bhuta .

“Various communities have their own bhuta or daiva ,” he adds. “At the inception, the bhuta was animalistic – for instance, some of the oldest bhutas are panjurli [wild boar] and pilichamundi [tiger]. These are the animals that the ancient farmer must have been scared of. As time went by, Tuluva kings had their Rajendra [royal] Bhuta, then there were those that are divine in nature such as Jumadi or Raktheshwari [similar to Goddess Durga].”

Prof. B. A. Viveka Rai though does not make a distinction between daivas and bhutas . He is professor emeritus, Mangalore University, where he was formerly professor of Kannada Literature and Folklore. “There is no difference between the two terms,” he says. “Both represent village deities worshipped in Tuluva culture. Both words are derived from Sanskrit.”

Some accounts speak of how colonial and and upper-caste historians changed the term ‘ d aiva ' to ' b huta ' to reduce the importance of the deities worshipped by the non-Brahminical castes. "The word ' daiva ' mean ' satya ', truth, while, bhuta in Tulu means 'bygone', 'deceased'. They are both derived from the Sanskrit language," says Prof. K. Chinnappa Gowda, former vice chancellor of Karnataka Folklore University, and former professor in the Department of Kannada, Mangalore University. "But if we look at the literary context, the paddanas , we can see the origin of the bhuta is one of a hero and not the devil. So yes, Brahmins, missionaries and colonisers reduced the importance of bhuta worship."

Most of the Tulu communities except Brahmins were traditionally involved in the k ola , the performance, says Prof. Rai. Some of the origin myths (narrated in the paddanas ) speak of heroes from Dalit communities who die a tragic death in battles or were murdered by kings and upper castes. But other origin myths and kola also involved other castes and communities, says Prof. Rai, including Muslims. 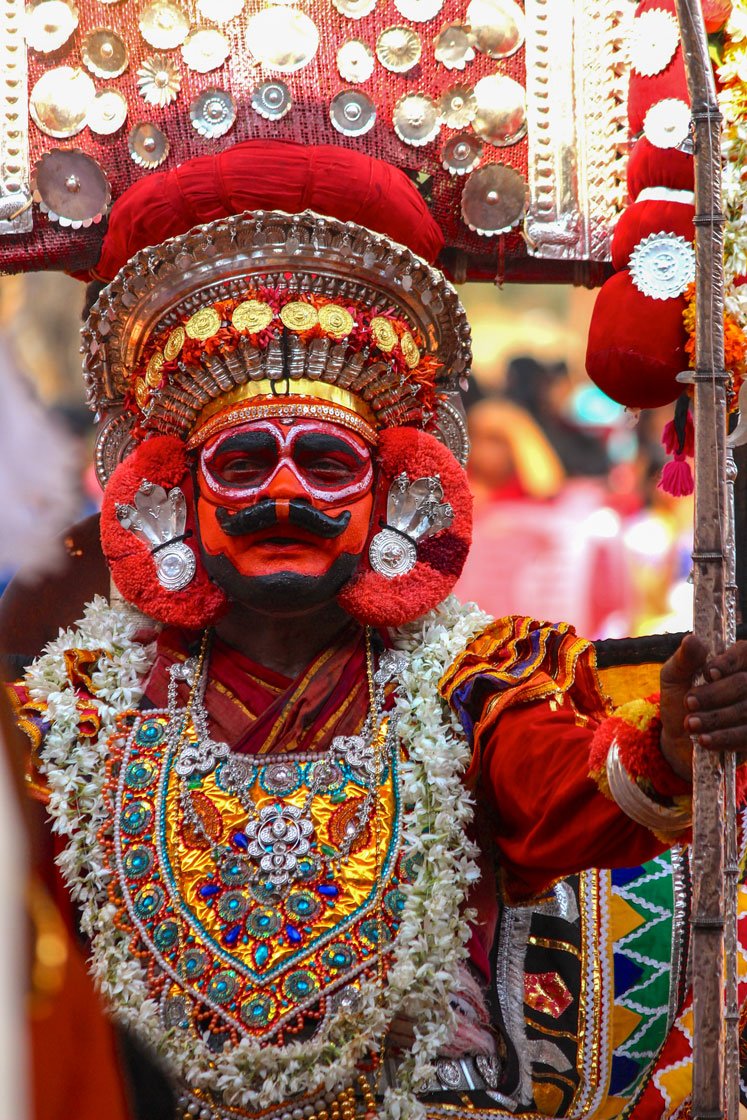 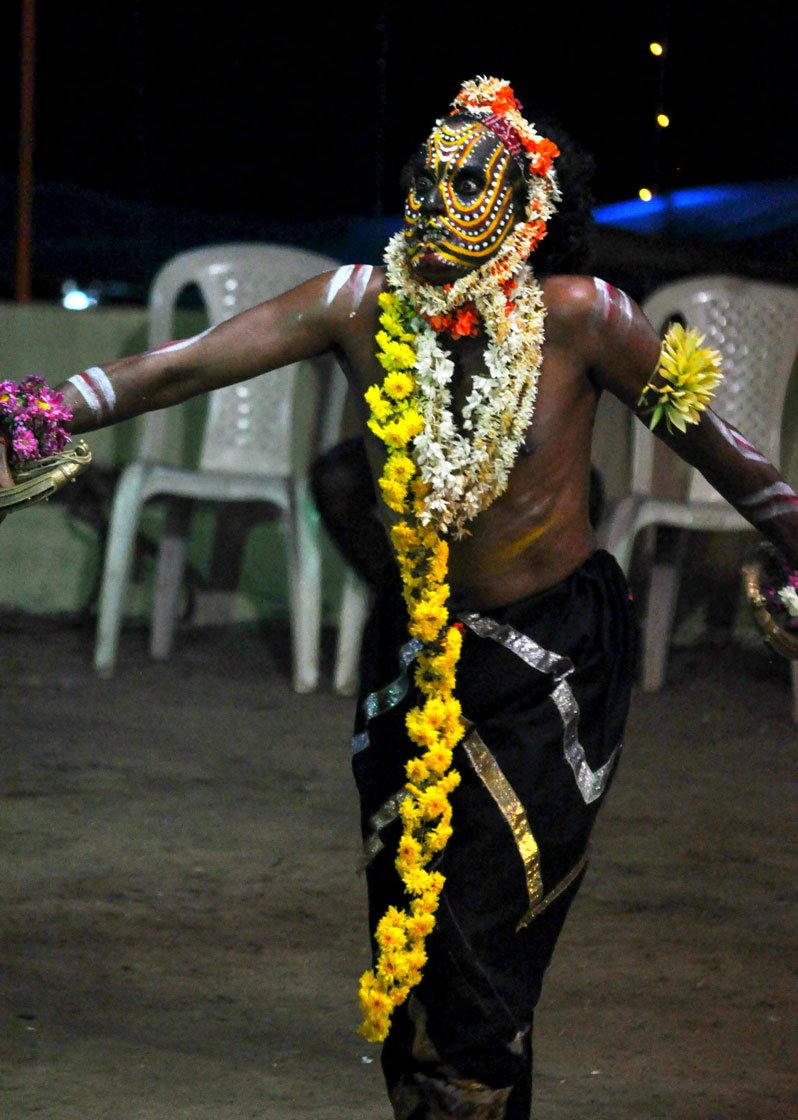 Various communities have their own bhuta or daiva , such as Kinnimani Daiva (left) and Rahu Guliga (right)

“The concept and ritualistic performance of b hutas might have been prevalent from the 15th century onwards. The Tuluva kings who ruled Tulunad from the 14th to 17th century were mostly Jains, and the religion does not believe in b huta worship. The worshipers of b hutas were mainly land-owning communities like Bunts. Later, since Jains also owned huge lands, they also started worshipping b hutas . When the Land Reforms Act was implemented in the 1970s [it was passed in Karnataka in 1961] and many Bunts lost their vast lands, other Tuluva communities who got the land also continued that tradition," Prof. Rai says.

“Brahmins appropriated b hutas in many Hindu temples and started to involve themselves in the rituals of bhutas , “through renovation of b huta shrines, conducting initiation rituals and inducting some Brahmanic practices of prayers and customs in bhuta performances…”

Kathalsar belongs to the Pambada community, a Scheduled Caste. Like him, the impersonator in a kola is always male. One of the women in the family is the singer at the beginning of the performance – she sings the paddana (which are also sung while plucking paddy, at home during leisure time, during festivals, and also formerly during toddy tapping). "Women of Dalit communities are the owners of the literary tradition of paddanas," says Prof. Gowda. "The paddanas explain the origin, diffusion and adventures of the bhuta/daiva. This entire oral tradition is preserved by the women of the performer's community, women are the source for this indigenous knowledge of the area."

“My mother and grandmother would sing paddanas in the field during farming. But my wife doesn't know these so well, so I recite them,” says Kathalsar. “Women were not allowed earlier inside the shrine and angana [yard where the performance takes place. They would gather in the surrounding area. Today they are allowed in all the areas, though in some places even today women are not allowed to collect prasada directly from the bhuta/daiva .”

Kathalsar’s wife Shailja is a former government school teacher, and now a homemaker. Their son and only child, Keerthan, is in Class 9 and attempted his first impersonation three years ago. 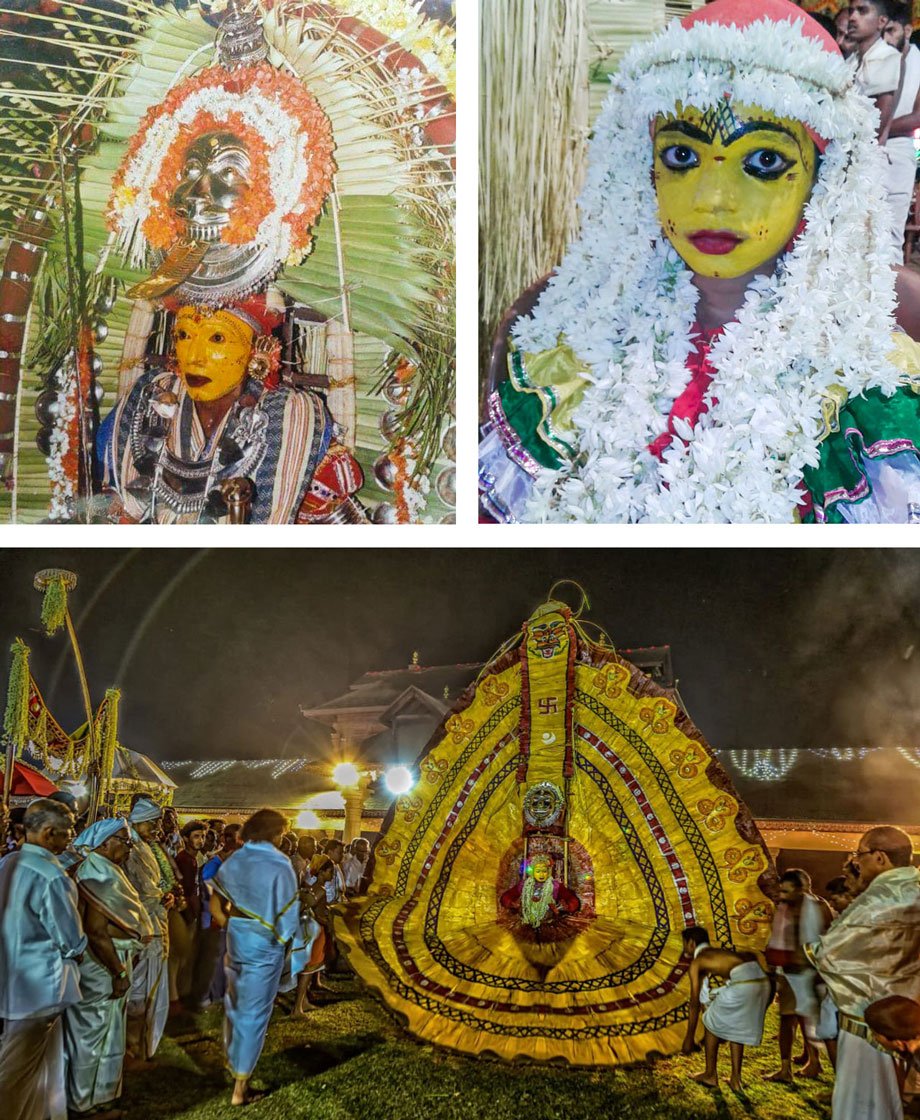 "It is ritualistic theatre with an element of anger and protest," adds Prof. Gowda. "Notice how idols of gods in the temples are calm, while the bhuta is loud and boisterous. It mirrors the history of oppression and injustice faced by members of the Dalit community."

The costume and ornaments can sometimes together weigh 60-70 kilos.And the elaborate halo-headpiece ( ani ) can go up to 10 feet. Kathalsar laughs when I ask how he carries this weight, and how he gets his foot movements right to perform. “In the same manner in which my father learnt — by observation. I observed him, and my kid will observe me and learn. There is no school where we can go and learn this art form, no guru . It is sheer observation and imitation. The sound of the instruments, the heat, the costume – all add to the transformation too of the performer into the daiva/bhuta ].”

Besides Kordabbu Daiva, that night over a decade ago, Rahu Guliga also performed. Part of his performance involved eating of puffed rice and raw chicken in a frenzied manner. He drank the blood of a sacrificial chicken. He didn’t don a heavy costumes or mask and was ready to perform after adorning a few flower garlands and some bodypaint. With no stage to perform on, he moved among the crowd, engaging directly with his audience. At times, he pretended to get angry with the musicians and at times ran around '‘possessed’, only to be reprimanded and calmed down by the audience. He danced for hours together.

At the end of a kola , the daiva/bhuta walks around the bhutastana (temple), and sits, exhausted, with a hand-held fan, while people come to him for blessings. Slowly, the night comes to end, with the impersonator having played his multiple roles – as a conservator of forest (there are sacred groves dedicated to local daivas/bhutas) , as a rural court in solving local disputes, as an avenue of psychological catharsis for many, and as a source of story-telling and remembrance of forgotten heroes from Dalit communities.

Nidhi Shetty works as a media professional in Mumbai. She has a postgraduate degree in Media and Communication from the London School of Economics and Political Science.