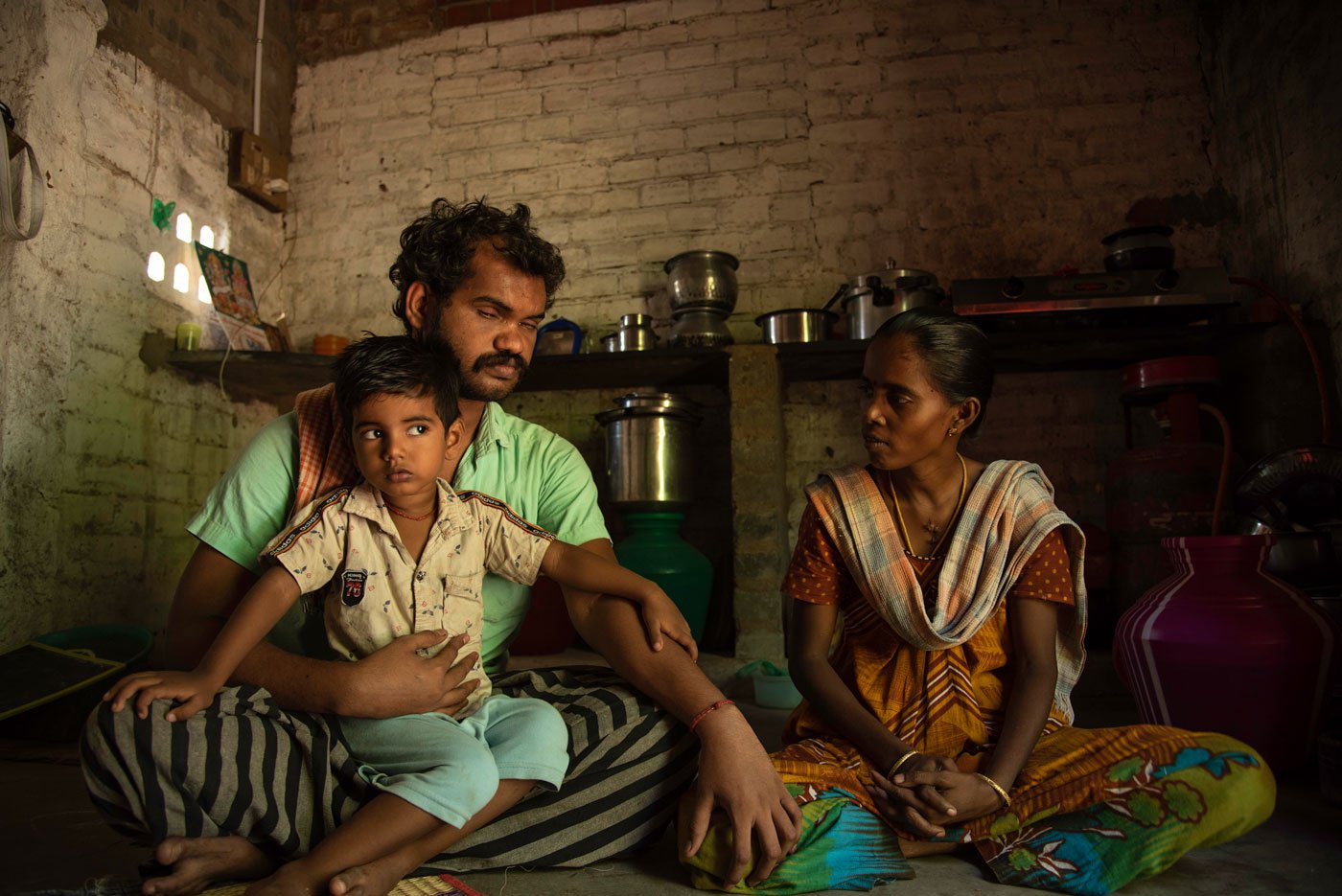 His arm on her shoulder, she guides his steps – this husband and wife team in Madurai faces life together despite the odds. But poverty, poor health and disability make their daily existence hard

It was love at first sight when Chitra saw Muthuraja at a friend’s wedding in 2016. He fell in love too, except he couldn’t see her – he was blind. Her family railed against the match. They argued she was throwing her life away marrying a blind man. She would have to earn for both, they warned, trying hard to dissuade her.

A month after they were married, Chitra’s family was proved wrong. It was Muthuraja who was looking after her fulltime, for she was diagnosed with a heart ailment. Since then, their life has been full of twists, many of them cruel. But M. Chitra and D. Muthuraja, 25 and 28, living in Solankuruni village, in Tamil Nadu’s Madurai district, face life with courage and hope. This is their love story.

Chitra was 10 years old when her father abandoned his three girl children, a bewildered wife, and left behind plenty of debts. Harassed by moneylenders, her mother pulled her children out of school and fled to the neighbouring state of Andhra Pradesh, where they all worked for a company manufacturing cotton thread.

They returned to Madurai after two years, and this time they went to work in a sugarcane field. Chitra was 12; she earned Rs. 50 cleaning up 10 rows of sugarcane, plucking and ripping the dried stalks. It was painful work, it chafed her hands and hurt her back. But they could barely pay back her father’s loans. So Chitra and her elder sister were sent to work in a cotton mill. She earned a daily wage of Rs. 30 there, and after three years – during which time the wage went up to Rs. 50 – she paid back the loan. Chitra does not recall the loan amount or the rate of interest. From experience, she knows it was crippling. 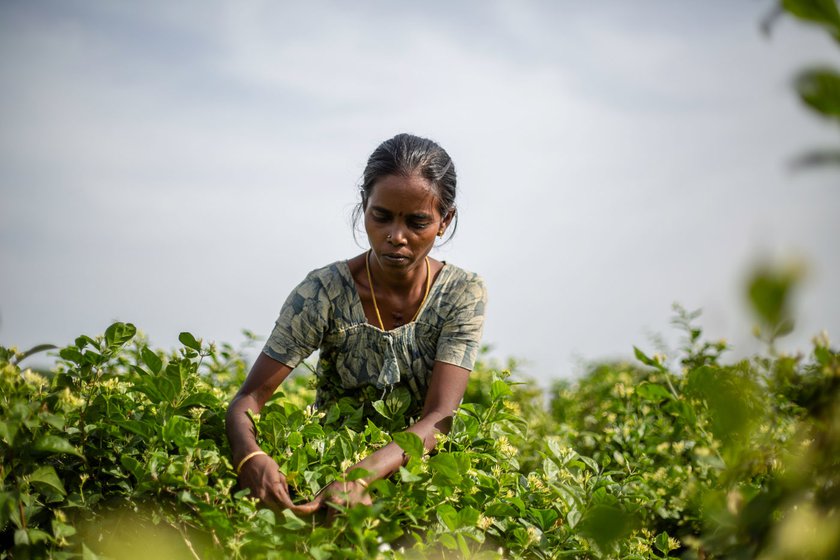 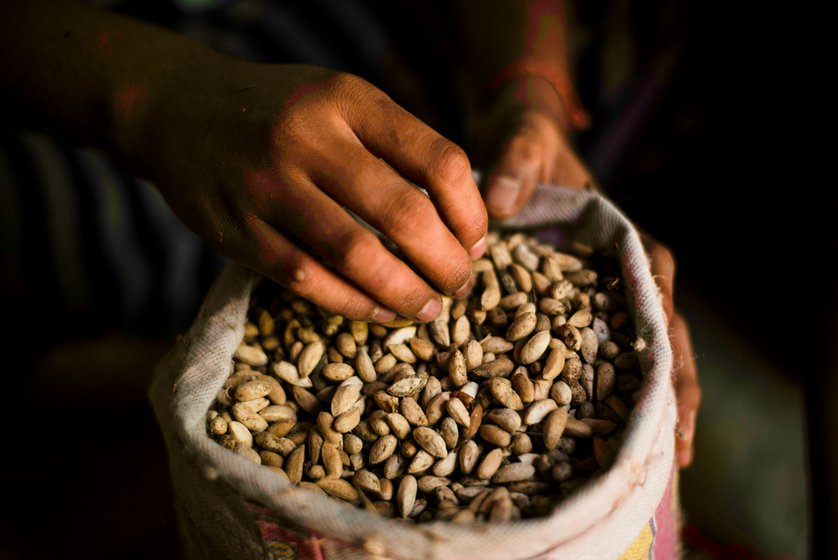 Chitra plucks 1-2 kilos of jasmine flowers (left) at a farm for daily wages. She gathers neem fruits, which she sells after drying them

No sooner was one loan paid off, there was need for another – her elder sister was to be married. Chitra and her younger sister went to work again, to a textile mill this time. They were employed under the Sumangali scheme, a controversial programme introduced by private textile mills in Tamil Nadu to supposedly help girls cover their marriage expenses. Unmarried women from poor and vulnerable communities were recruited to work for a period of about three years, and their families were promised a lump sum at the end of their contract. Chitra, who earned Rs. 18,000 a year, was still a teenager and toiling to pay off debts. She ran the house until 2016, when she was 20 and met Muthuraja.

It was three years before he met Chitra that Muthuraja completely lost vision in both his eyes. The date and time is stamped on his mind  – it was 7 p.m. on January 13, 2013, the night before Pongal festival. He remembers the rising panic when he realised he could no longer see anything.

The next few years were devastating for him. He mostly stayed indoors – feeling angry, mad and weepy – and he had suicidal thoughts. But he survived. At the time of meeting Chitra, he was 23 and blind, and he “felt like a corpse”. It was she, he says softly, who gave him a new lease of life.

A series of unfortunate accidents had impaired Muthuraja's vision before he became blind. When he was seven, he and his sister was transplanting rose plants on their farm in Madurai, where they grew the flowers for sale. It took one mistake – his sister did not grab an uprooted plant correctly from his hands – and the stem hit his face and the thorns pierced his eyes.

After six surgeries, there was some vision in his left eye. His family sold their three cents (0.03 acres) of land and went into debt. Some time later, his good eye took another hit when he met with a bike accident. Then school and studies were hard for Muthuraja – he couldn’t see the blackboard very well or the white letters on them. But he somehow managed until Class 10 with his teachers' help.

Muthuraja's world went completely dark that January day in 2013 when he bumped his head against an iron rod on the street in front of his house. It was only after he met Chitra that light – and love – returned. 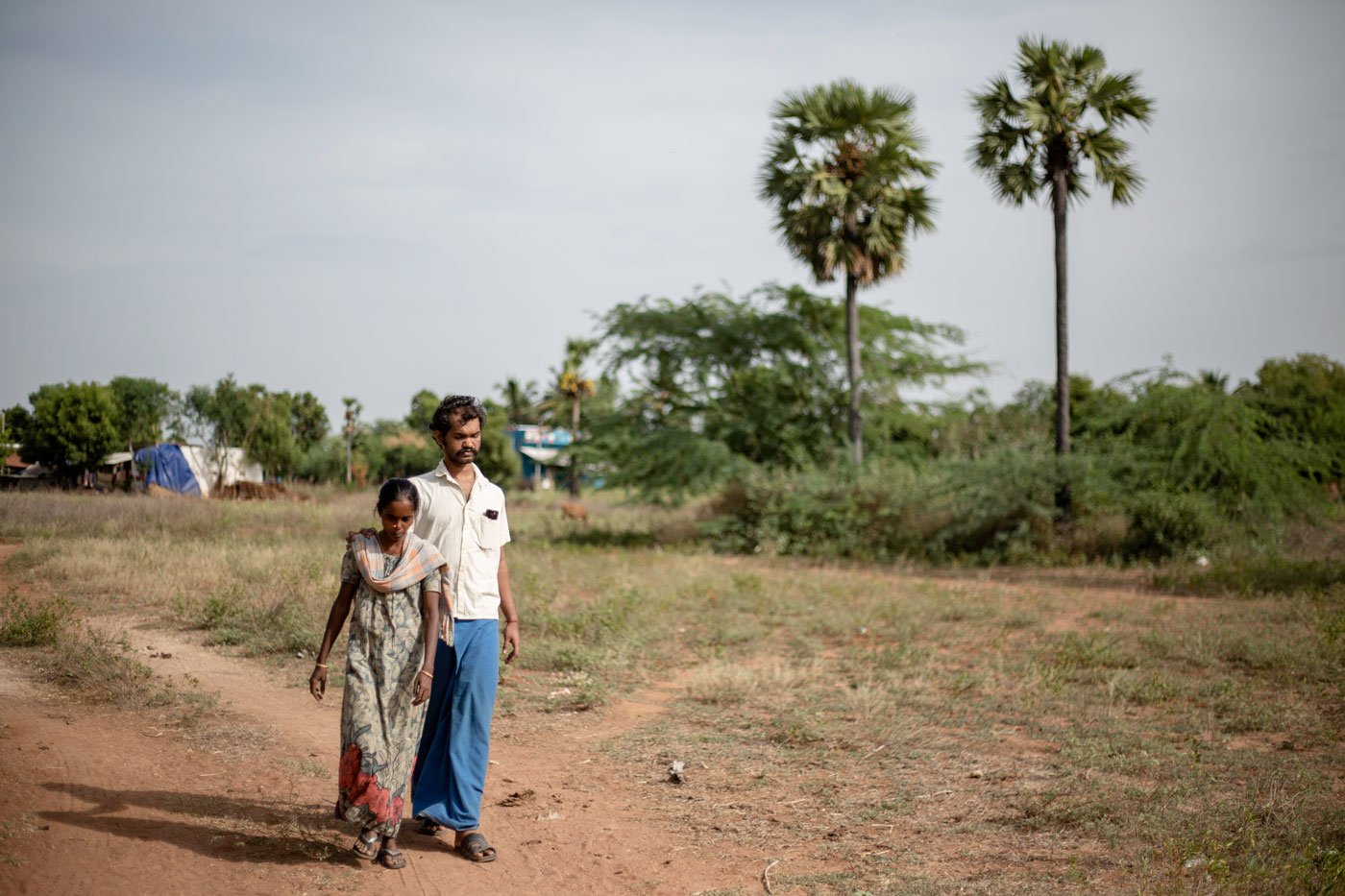 Chitra and Muthuraja walk back to their home in Solankuruni village, in Madurai's Thiruparankundram block, after she finishes the day's work at the jasmine farm

A month after their wedding, in 2017, Chitra began to have trouble breathing. They went to the government hospital in Madurai's Anna Nagar, locality. After many tests, they discovered that Chitra's heart was weak. The doctors said they were surprised she was alive this long. (Chitra cannot name her problem – her files are with the hospital.) Her family – for whom she had toiled all her life – refused to help.

Muthuraja borrowed Rs. 30,000 at a usurious interest rate for her treatment. She had an open heart surgery and was in the hospital for three months. When she returned home, she was better, but then Muthuraja needed an ear surgery. Frustrated, they contemplated ending their lives. But a new life stopped them – Chitra became pregnant. Muthuraja was worried if Chitra’s heart could take the strain but their doctor advised them to go through with the pregnancy. After anxious months and prayers, their son was born. Four years old now, Vishanth Raja is their hope, their future and joy.

Everyday living continues to be hard for the couple. Chitra cannot lift anything heavy because of her condition. Muthuraja carries the pot of water they fill up at a pump two streets away, with one arm on her shoulder. She is his guide, his eyes. Chitra gathers neem fruits from fields and the nearby forest area, then dries them and sells them for Rs. 30 a measure. At other times, she picks and sells manjanathi kai (Indian mulberry), which fetches her Rs. 60 a measure. She plucks a kilo or two of jasmine flowers at a farm and earns Rs. 25-50 in daily wages.

Chitra’s income averages Rs. 100 a day, which goes towards their living expenses. They buy her medicines with the Rs. 1,000 that Muthuraja receives every month through Tamil Nadu government’s Differently Abled Pension Scheme. “My life runs on these medicines. If I don’t take them, I’m in pain,” says Chitra.

The Covid-19 lockdowns took away her chance of earning by foraging for fruits. With the drop in income, Chitra stopped taking her medicines. So her health has worsened – she has been having trouble breathing and walking. She cannot afford to buy milk for her tea – so her son drinks only black tea. “But I like this only,” says Vishanth, as if he understands his parents, their life, their losses – and their love. 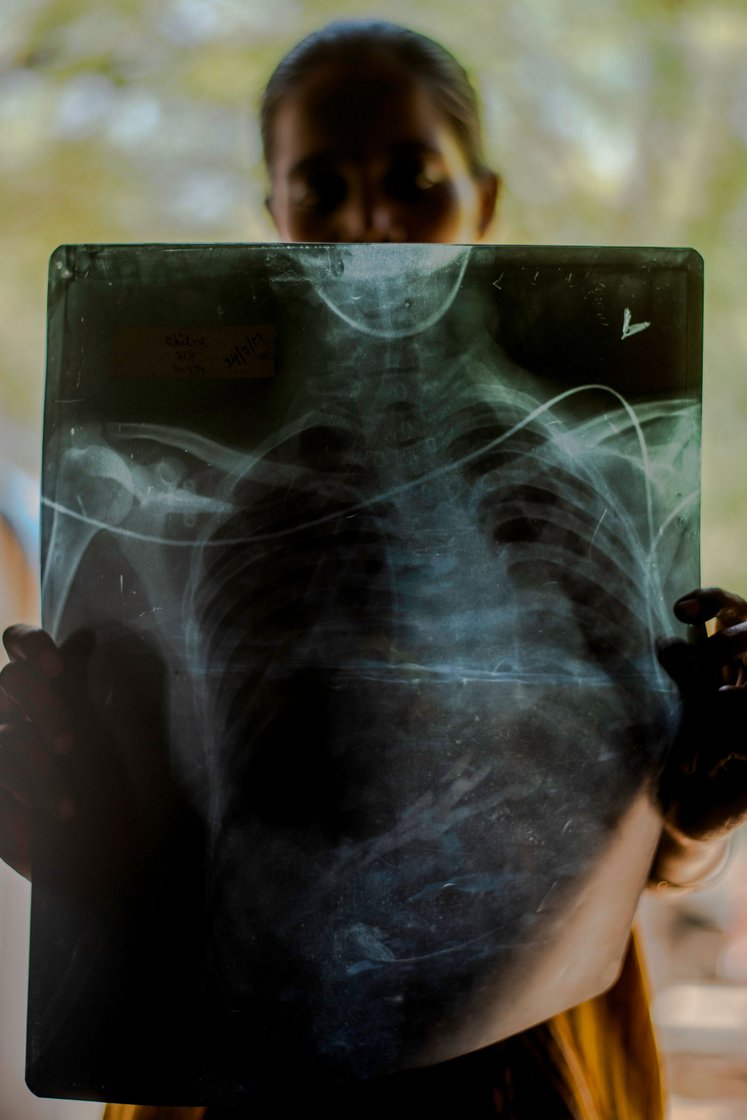 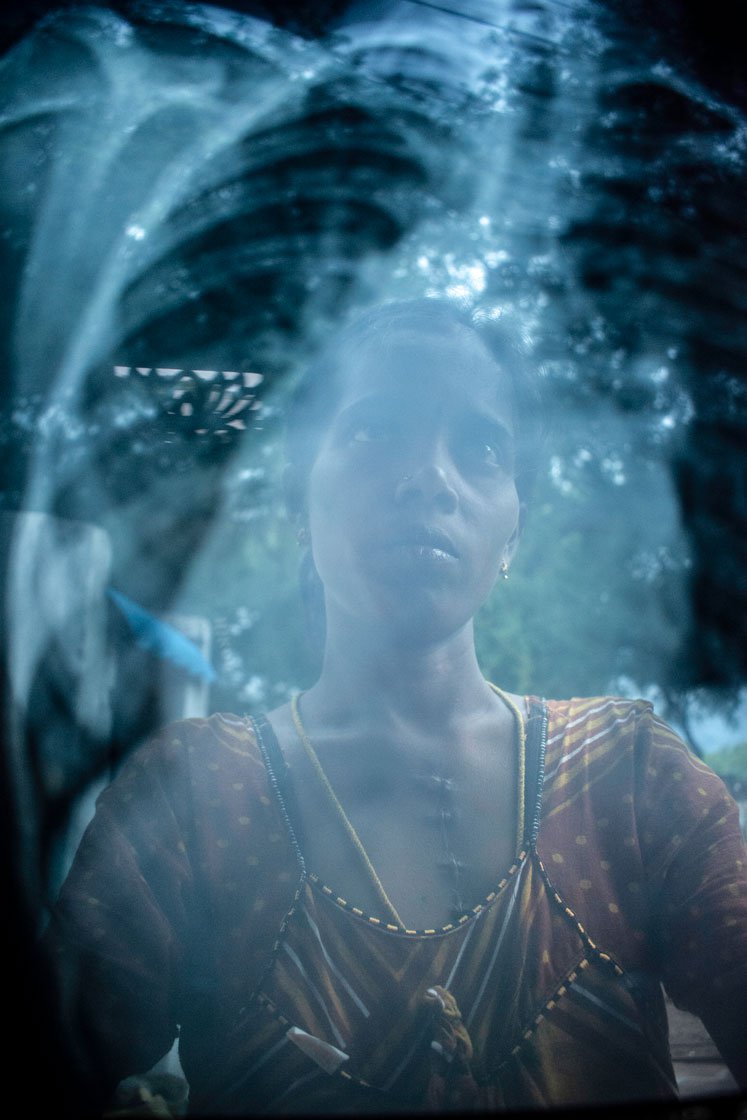 Chitra’s chest scans from when her heart ailment was diagnosed in 2017. Recently, doctors found another problem with her heart. She needs surgery, but can't afford it 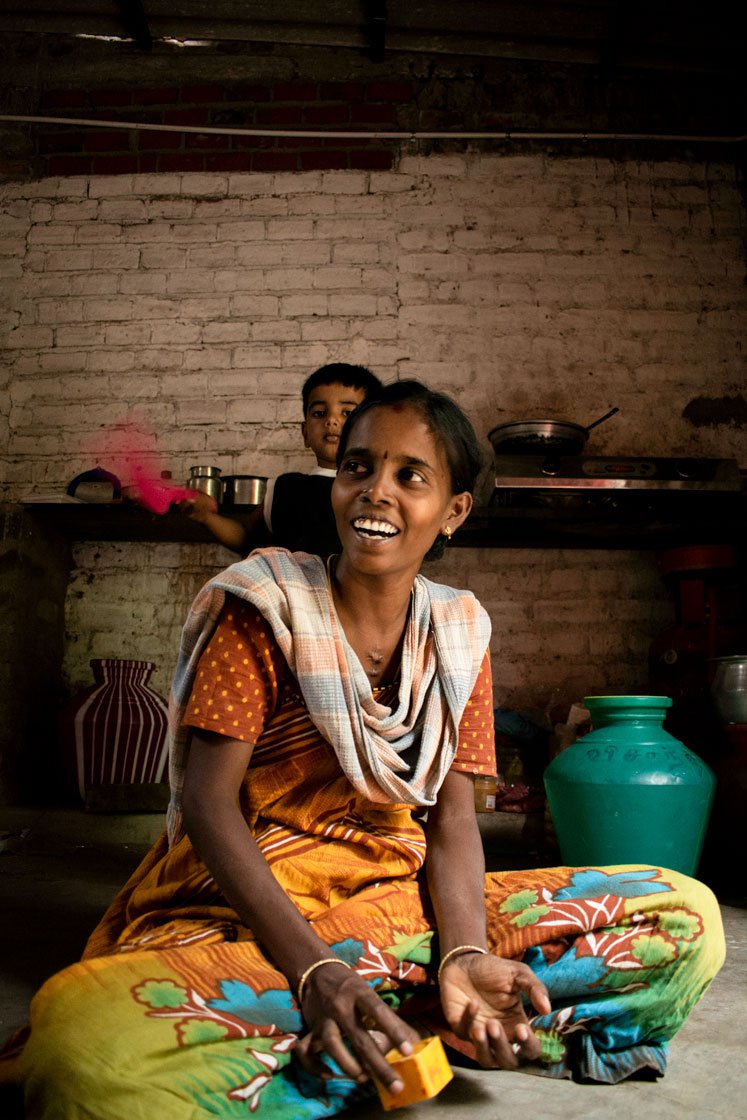 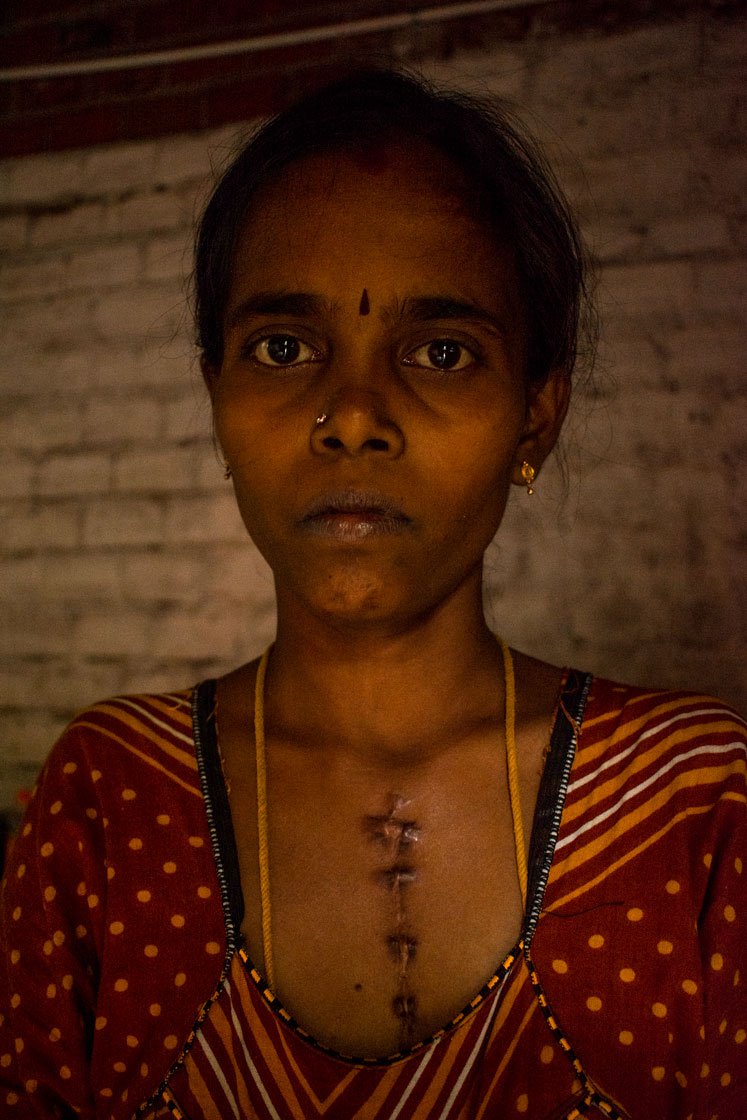 Chitra worked long, back-breaking hours since she was 10, much of it as a farm worker and mill employee 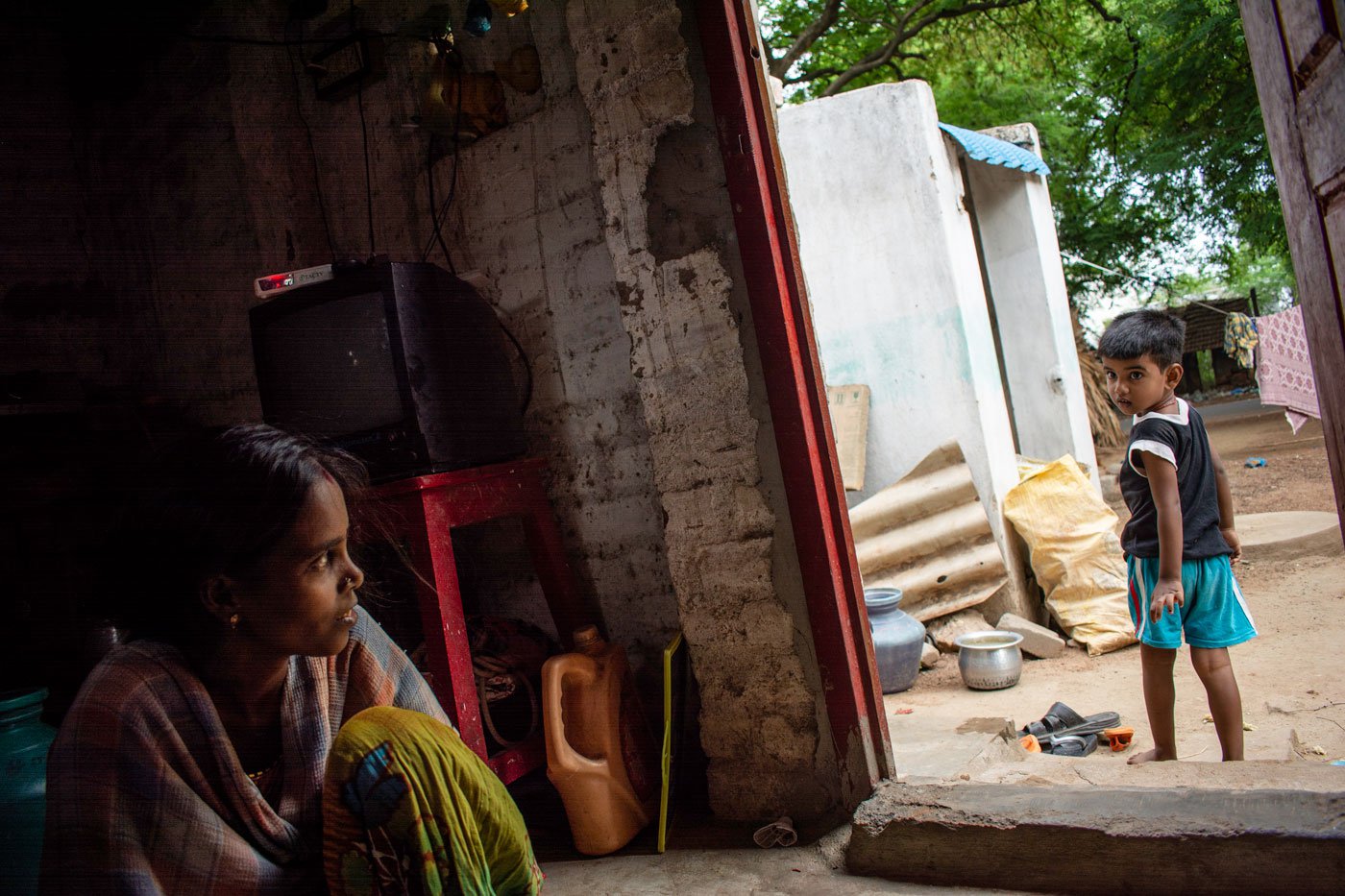 Chitra watches over her four year old son, Vishanth Raja, who was born after anxious months and prayers 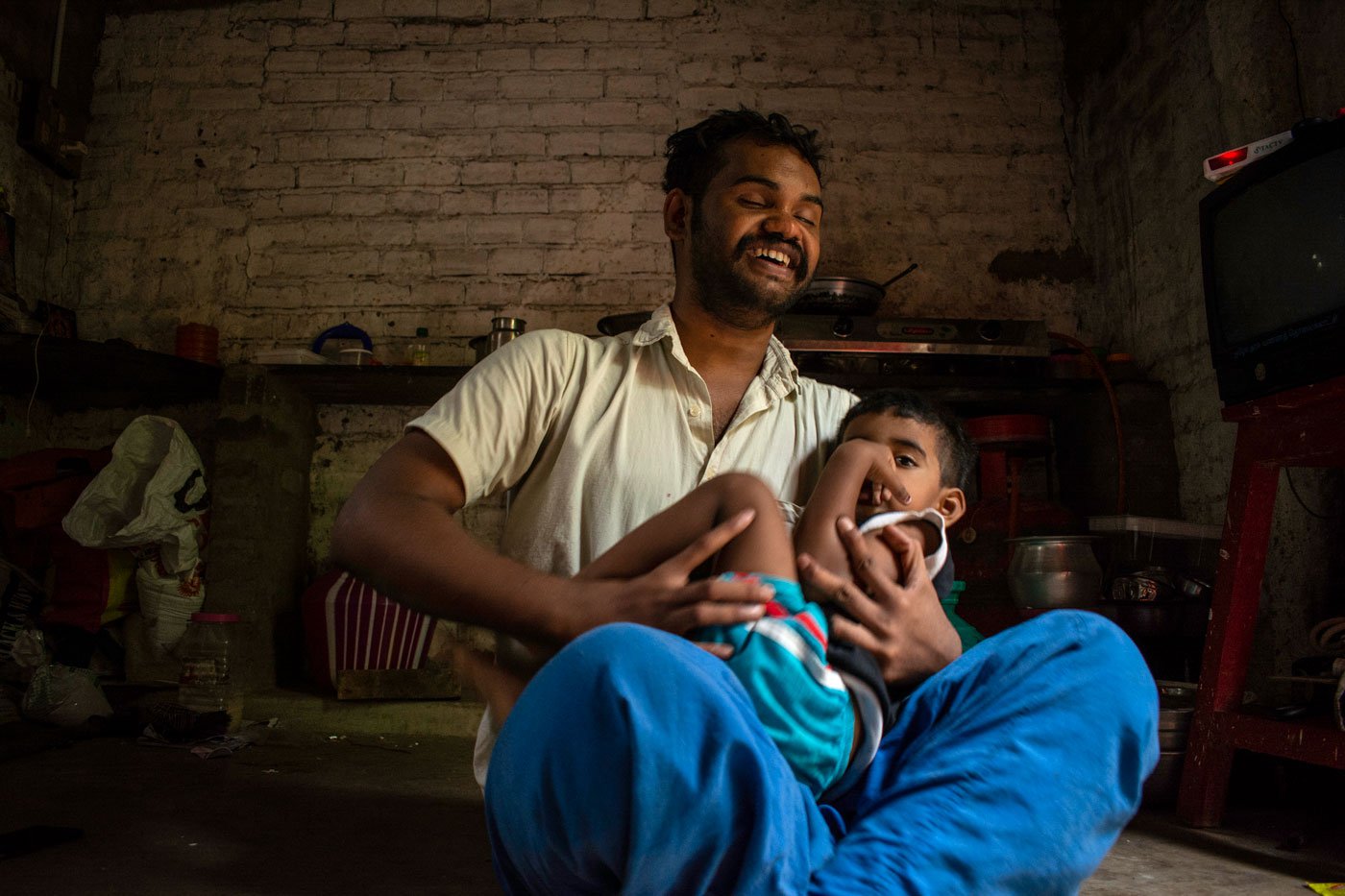 Their son is their world; without him, Muthuraja says, he and Chitra would have ended their lives 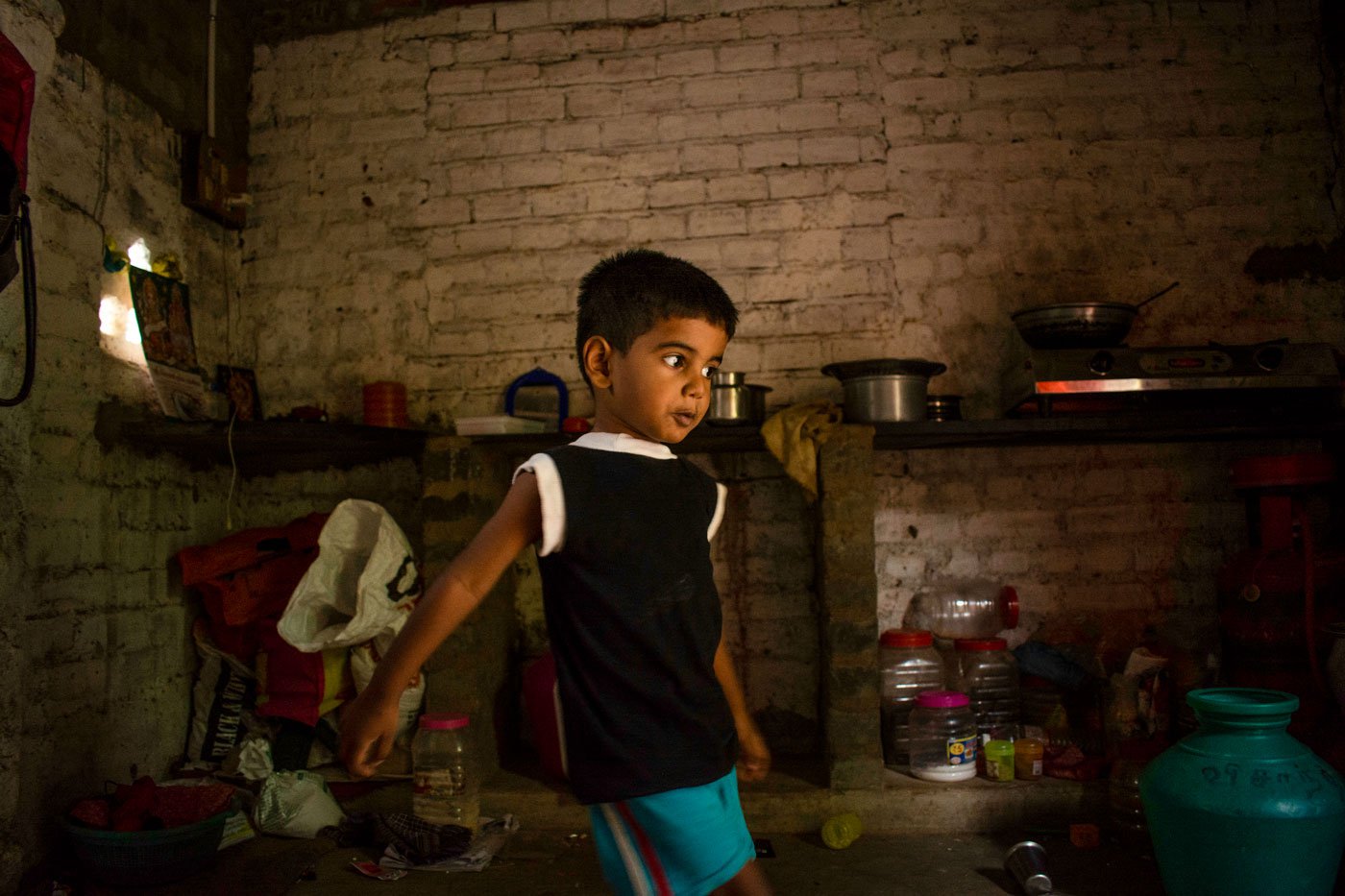 Vishanth entertains his parents by singing and dancing with them. Seen around him are all the household belongings of the family 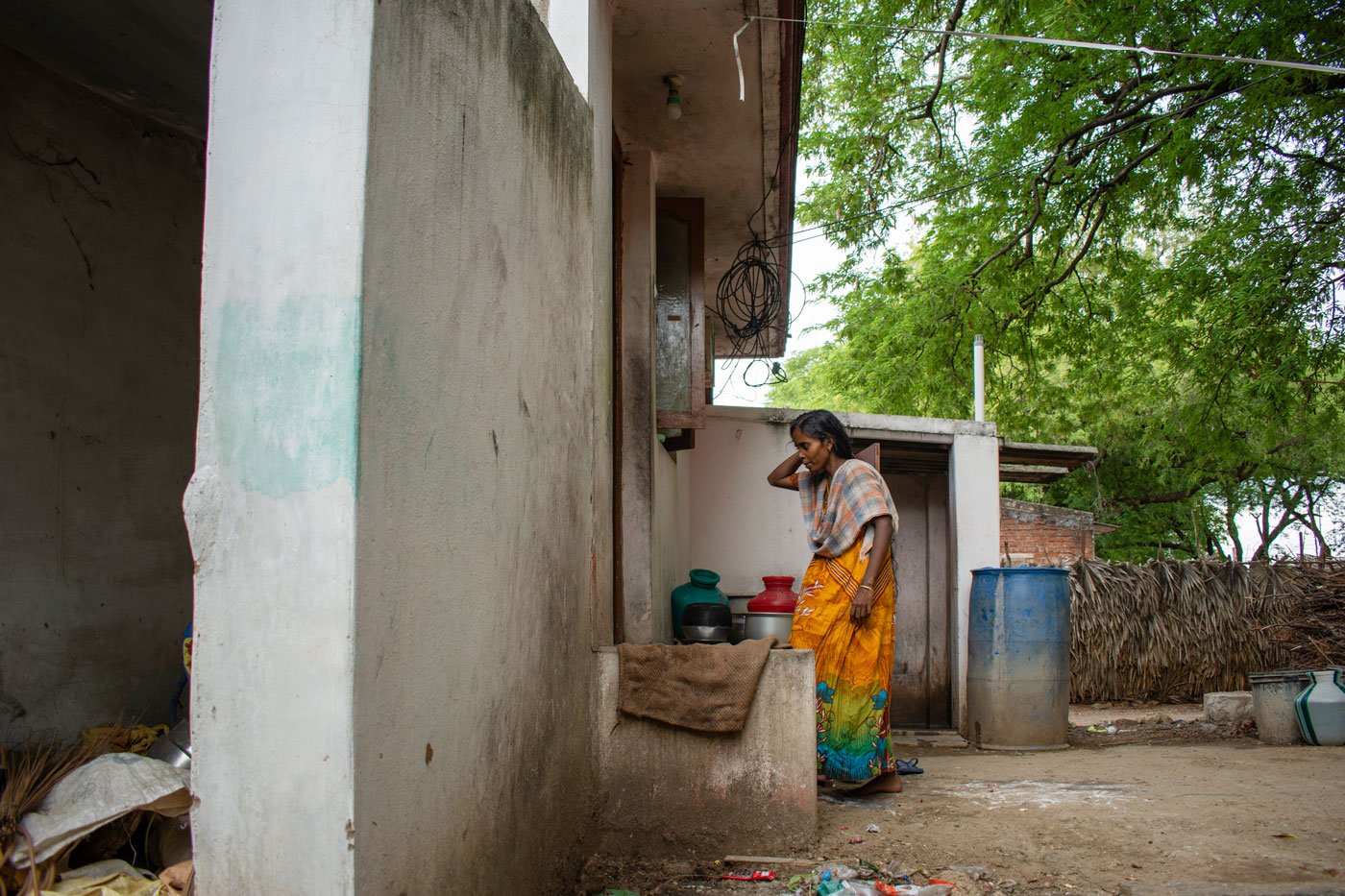 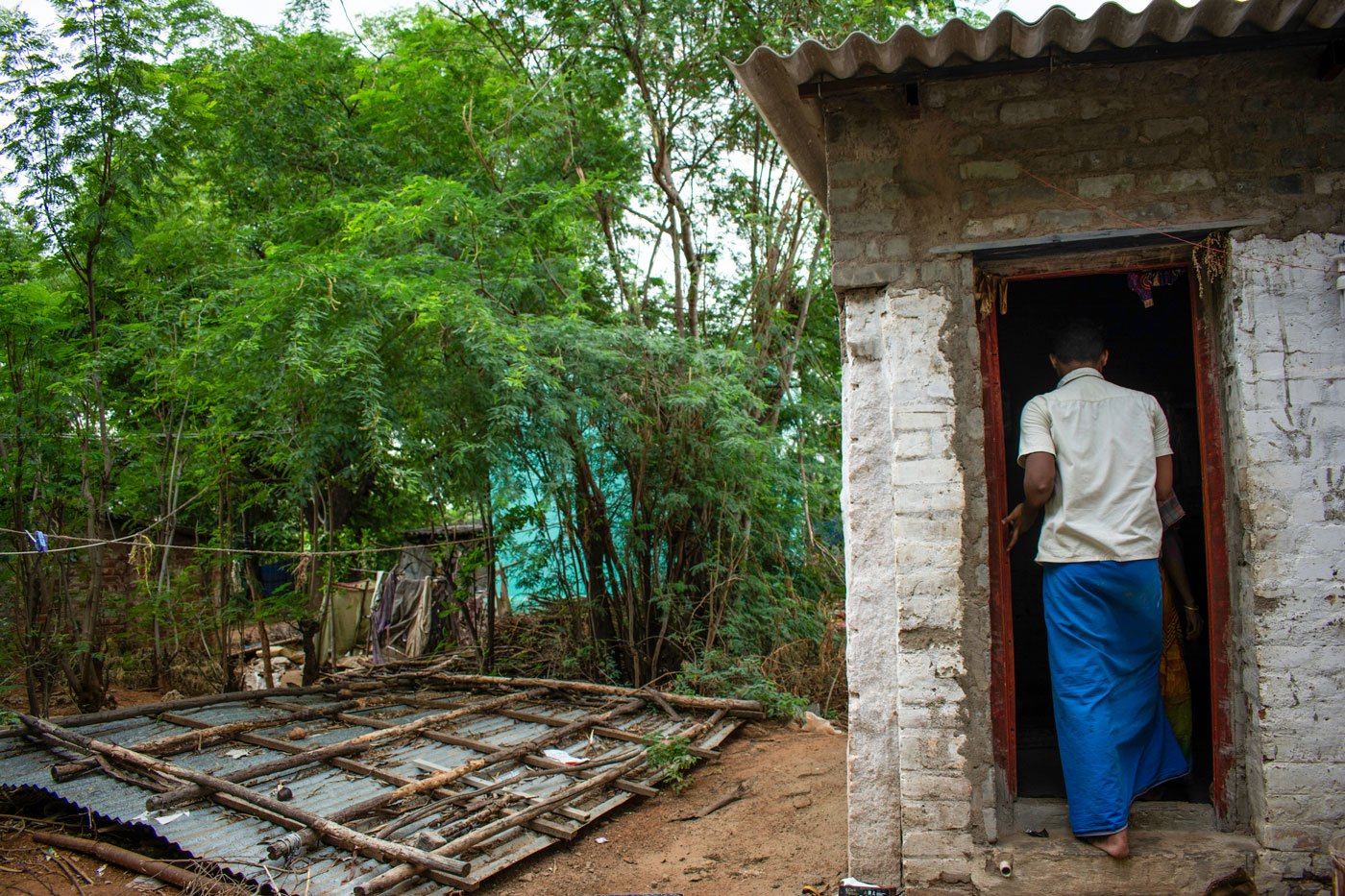 The asbestos roof of Chitra and Muthuraja’s house was blown away by strong winds and heavy rain. Their relatives helped them get a new roof sheet 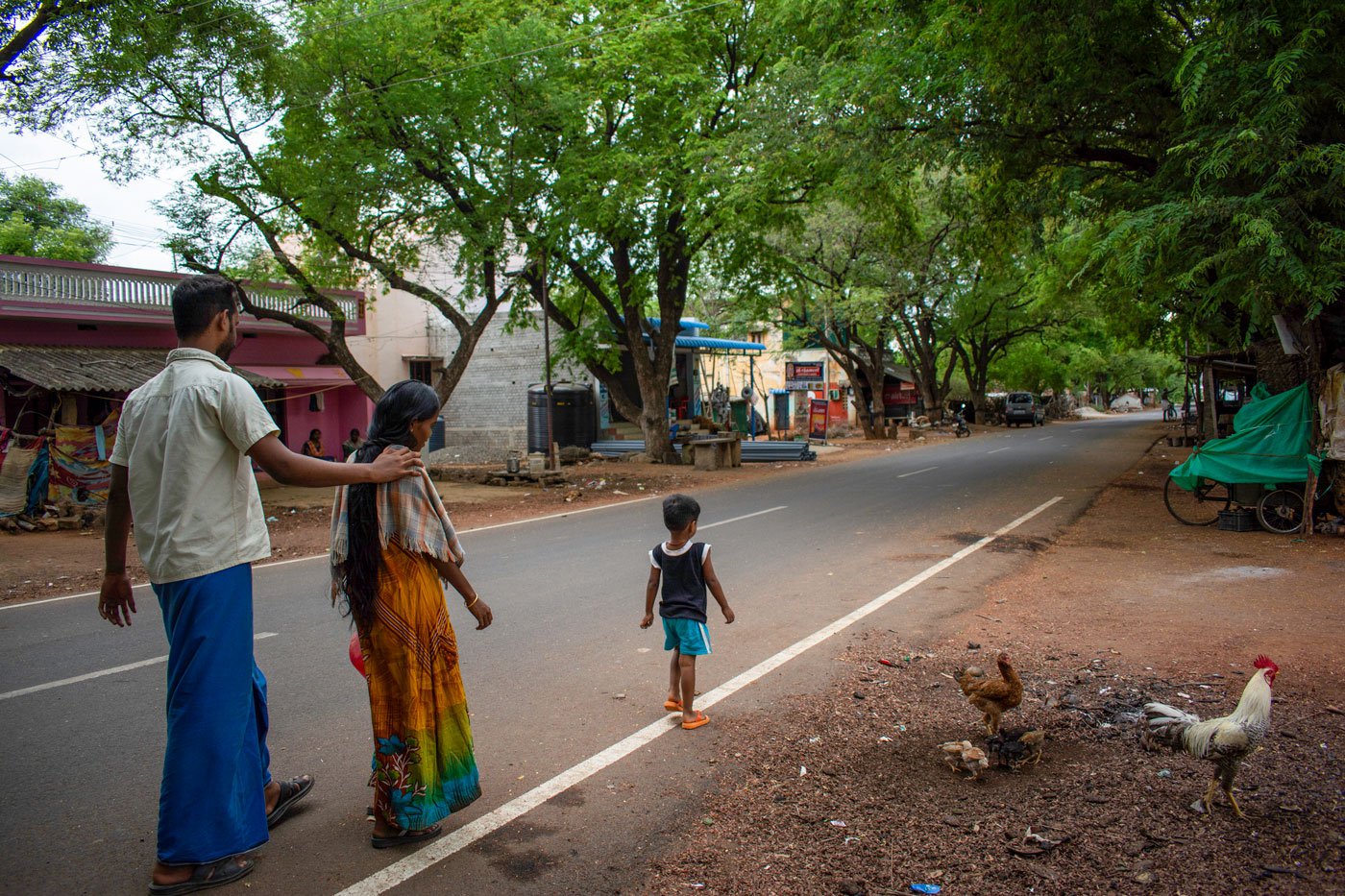 Muthuraja, Chitra and Vishanth walk to the pump two streets away to fetch water everyday 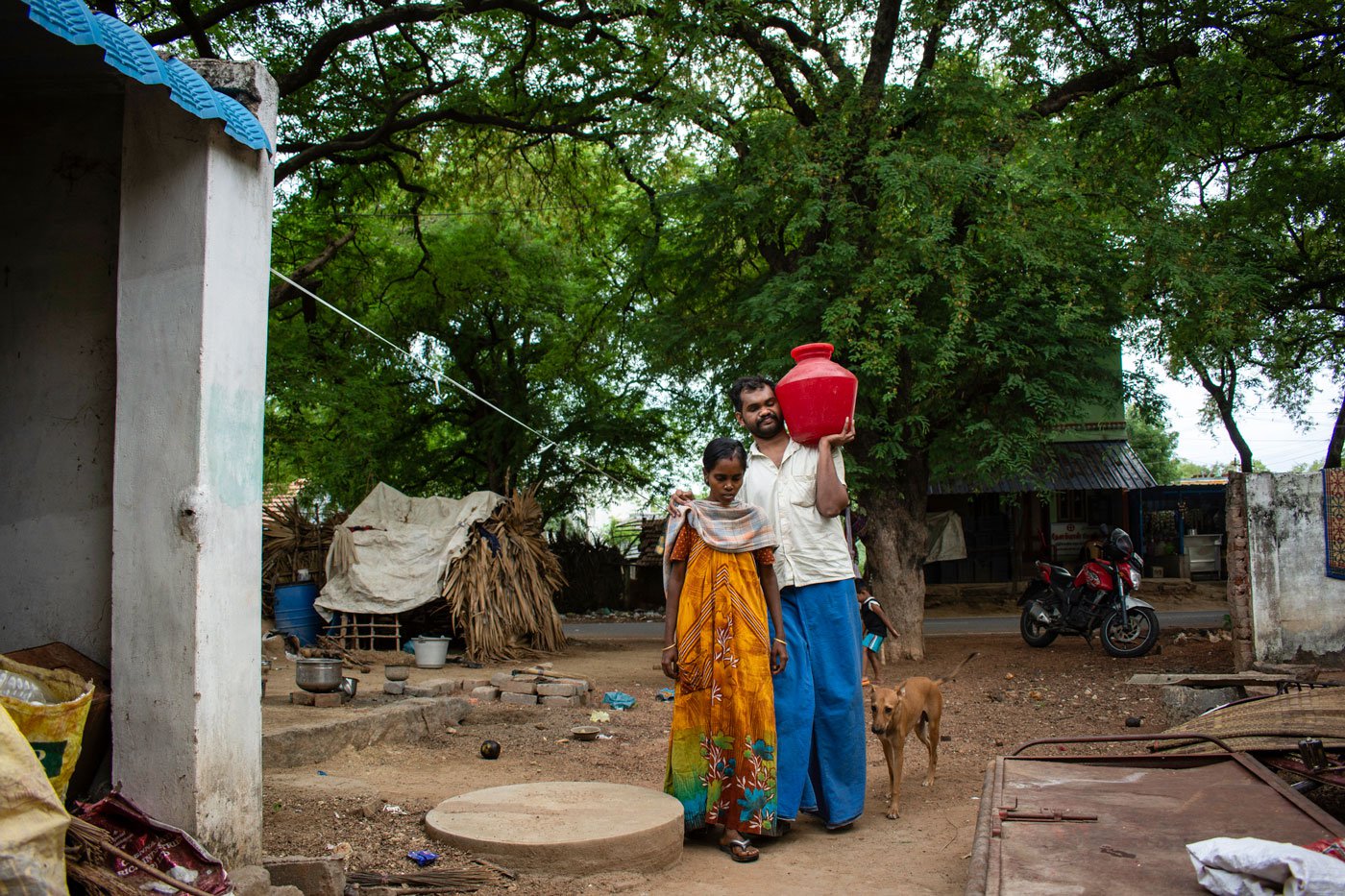 Chitra cannot lift anything heavy because of her heart condition, so Muthuraja carries the pot and she guides him 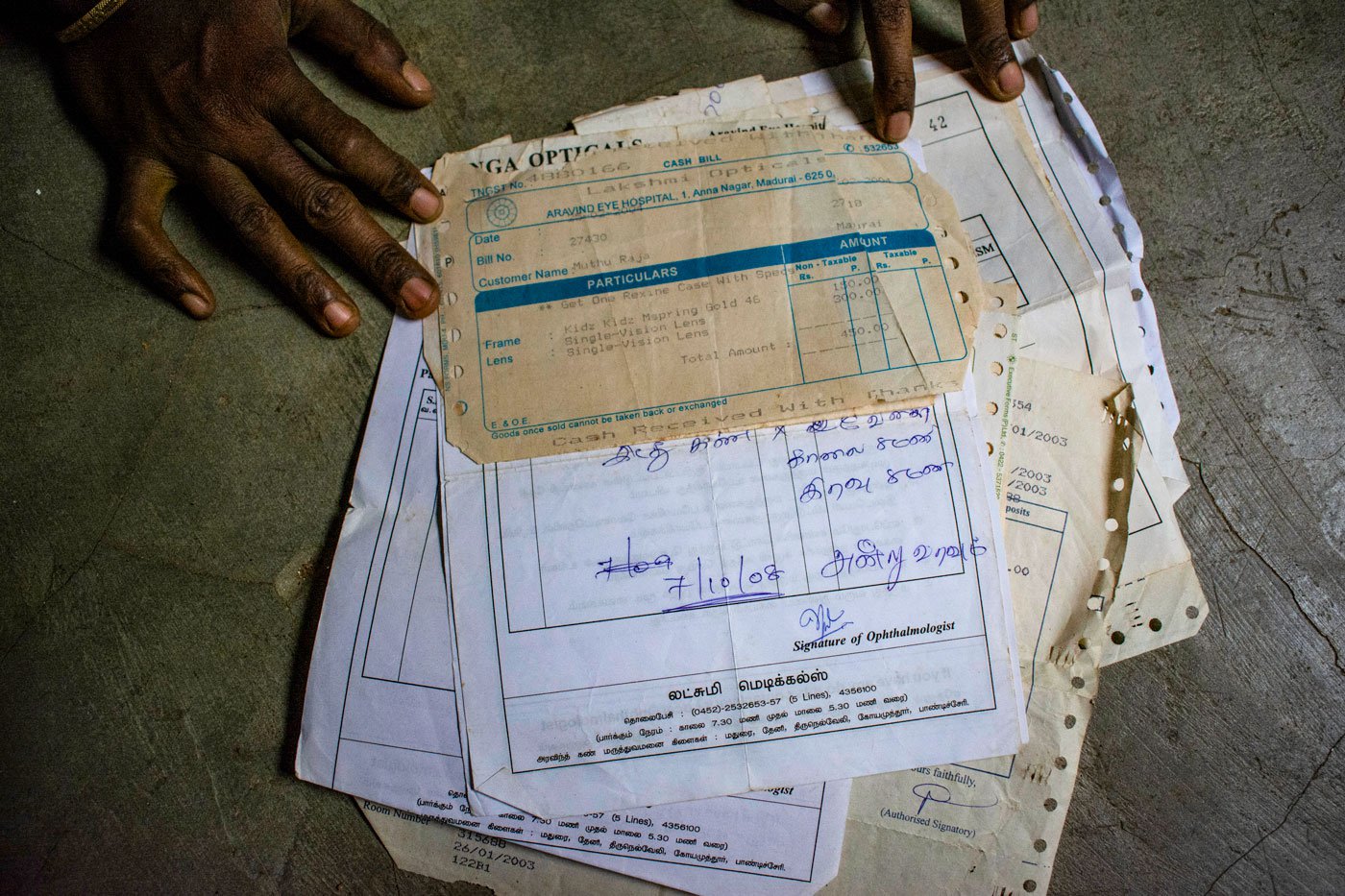 In their crumbling home, Chitra has safely preserved all their medical bills 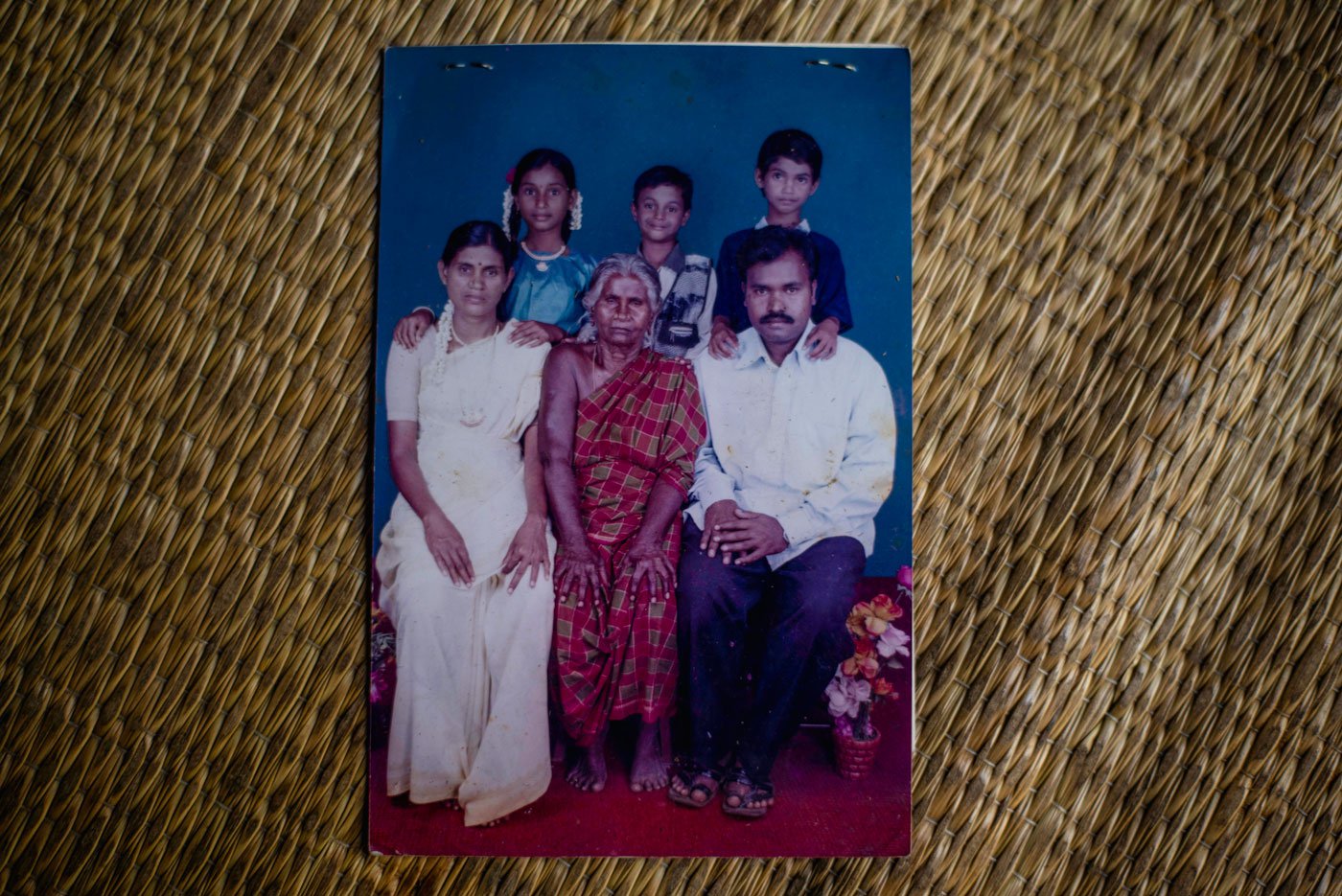 An old photo of Muthuraja’s family – he’s the boy in a blue t-shirt, at extreme right in the second row 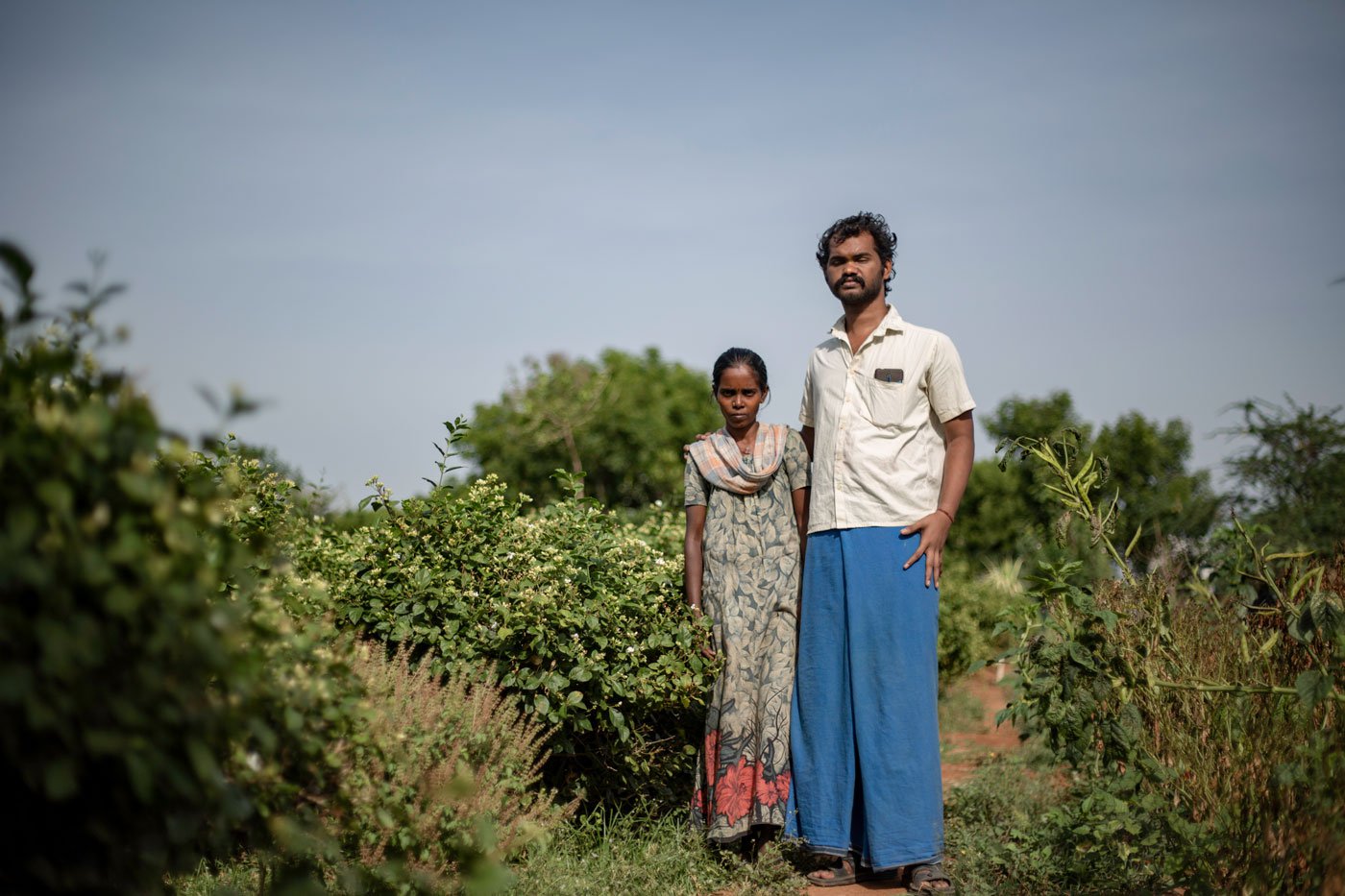 Chitra and Muthuraja's life is full of cruel twists, but they face it with hope