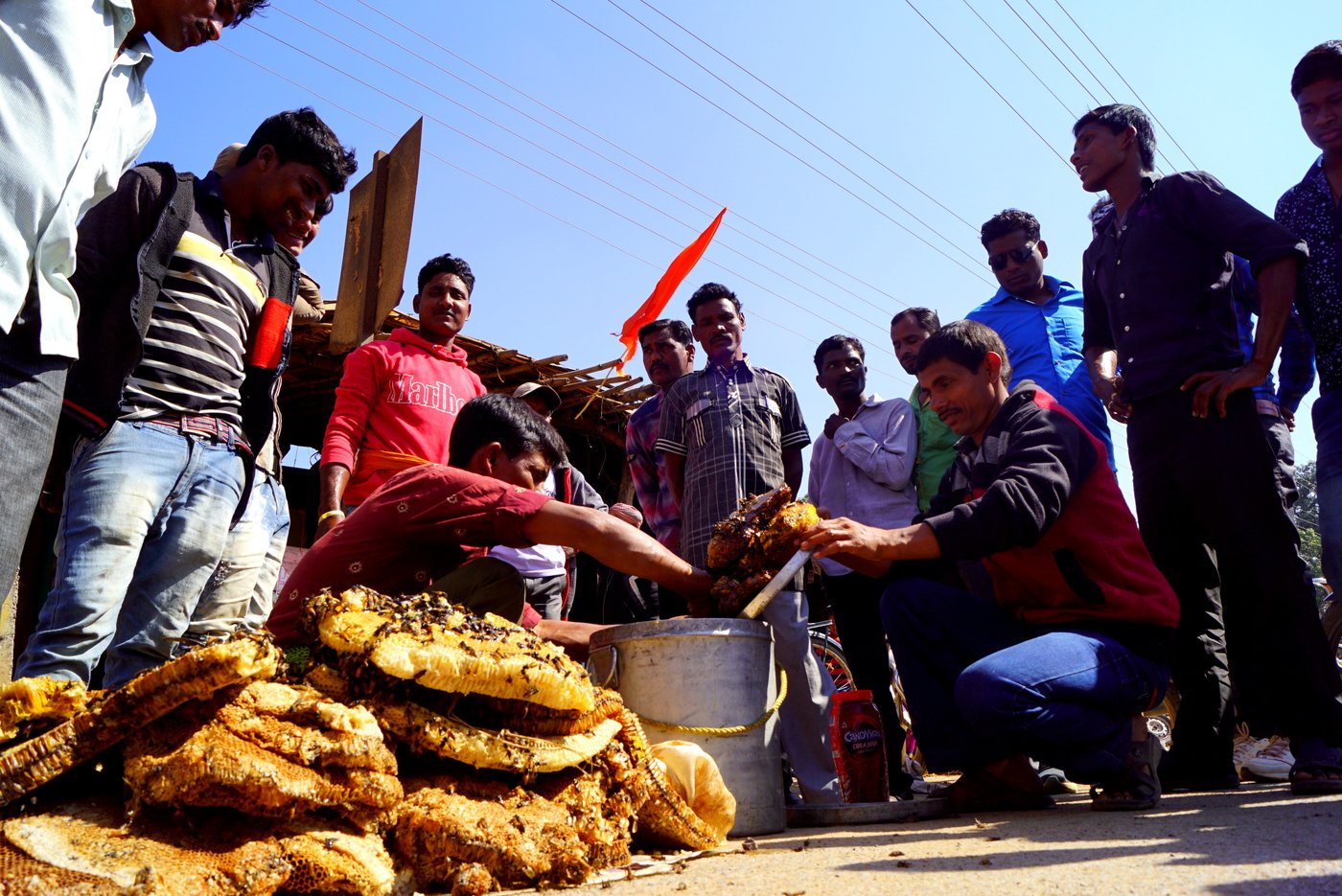 Chasing bees from Bengal to Chhattisgarh

Honey harvesters from the Sundarbans are sometimes called to various states to remove large bee nests from buildings. Their payment is the honey, which they then sell – as this group is doing in Dhamtari district

On the side of a road in Nagri tehsil of Dhamtari district, I notice a group of around 10 people huddled over something. I stop and walk up to them to see what they’re drawn to.

A few young men are selling honey dripping from honeycombs that were part of a bee nest on the roof of a local government hospital. The hospital administration had asked them to remove the nest.

I ask them where they’re from. Saibal says, with evident fondness for his home, “Kolkata, West Bengal!” Proper Kolkata, I ask? “Do you know the Sundarbans?” he replies.  Of course, I say, wondering if they collect honey back home in the Sundarbans too. 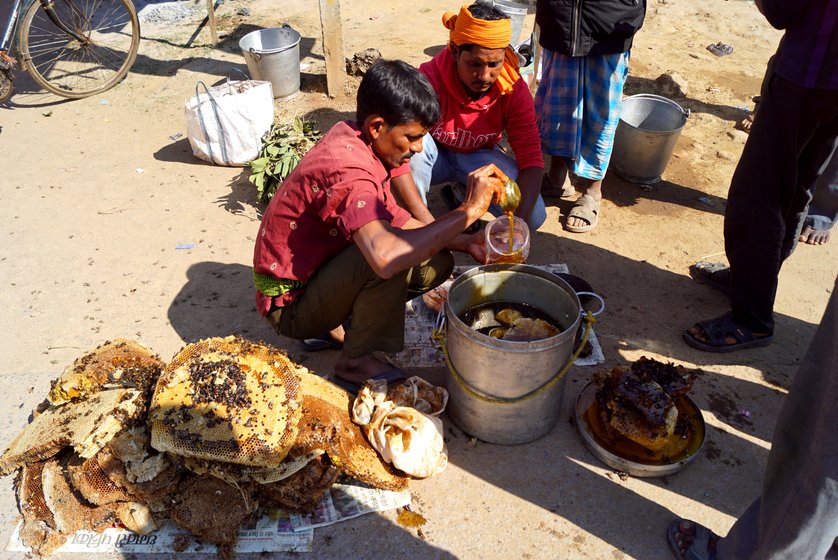 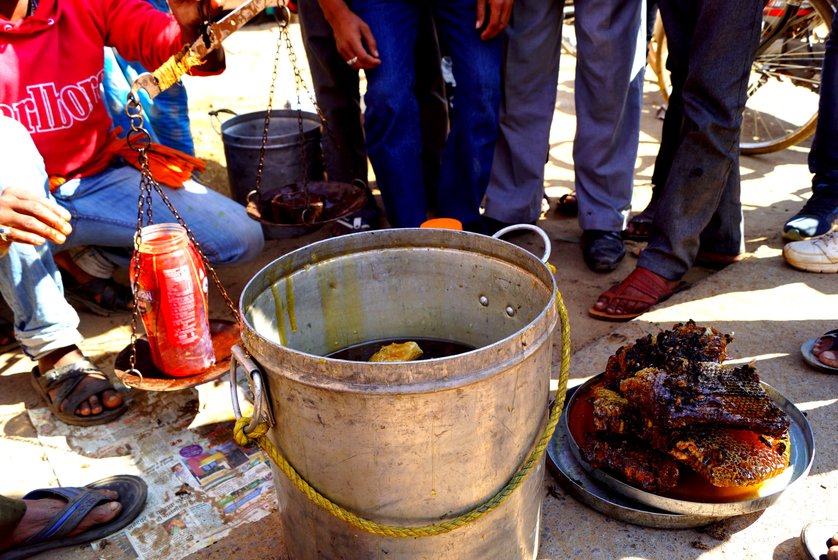 Saibal (in red shirt, pouring the honey) and Ranjit Mandal (not in the photo), along with a few others, at their makeshift roadside honey stall in Nagri tehsil

“Collecting honey is not our profession, we are [house] painters. Whenever someone asks us, we do this work too. But we also harvest honey as beekeepers in our village, so we know how to remove honeycombs. It is our traditional skill. Our grandfather and his grandfather also did this.”

Saibal then tells me how they handle the flying, buzzing bees. They start with setting fire to a handful of straw and smoke the bees out from the hives. “We capture the queen bee by creating smoke,” he says. “We neither kill honeybees nor burn them. Once we’ve captured the queen bee and kept it in a bag, the other honeybees become harmless.” The bees fly away and the harvesters cut the nest and collect the honey.  “Then we release the queen bee in the forest. So that they can make their new colony.” 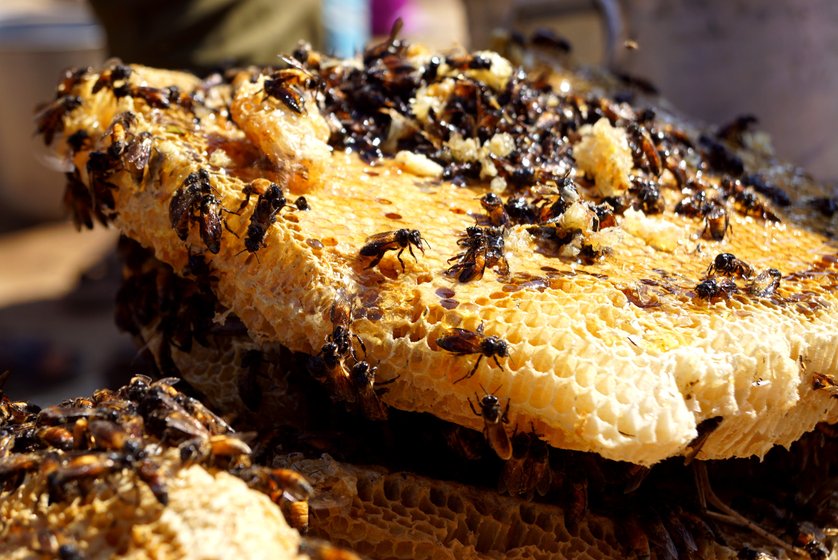 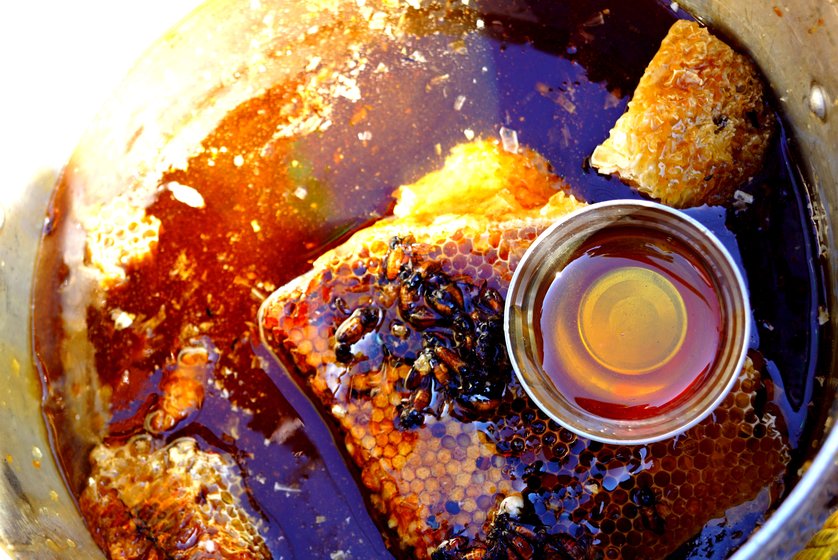 'We neither kill honeybees nor burn them... we release the queen bee in the forest. So that they can make their new colony'

In Nagri, by the side of the road, they are selling the honey (and honey-soaked combs) for Rs. 300 per kilo. They have got 25 kilos of honey as their payment from the hospital authorities.  They also sell beeswax (the comb’s hexagonal cells) for Rs. 400 a kilo. In Chhattisgarh, the Ghadwa community uses it to make the distinctive Dhokra art objects.

When I ask Ranjit Mandal, one of the youngest in the group, how many times he’s done this before, he says: “So far I have removed honeycombs around 300 times in different places like Jagdalpur, Bijapur, Dantewada, Sikkim, Jharkhand and so on.”

Two years ago, while doing a story on drought, I was travelling through a forest near Jabarra village in the same tehsil in Dhamtari district. There I met Anjura Ram Sori, from the Kamar tribe, who made a living by selling forest produce. He said, “When there is a drought in the forest, it’s the honeybee who migrates out of that forest.” That’s when I realised that like people forced to move, honeybees too must migrate to greener lands.
Purusottam Thakur
@puruthakur
[email protected]