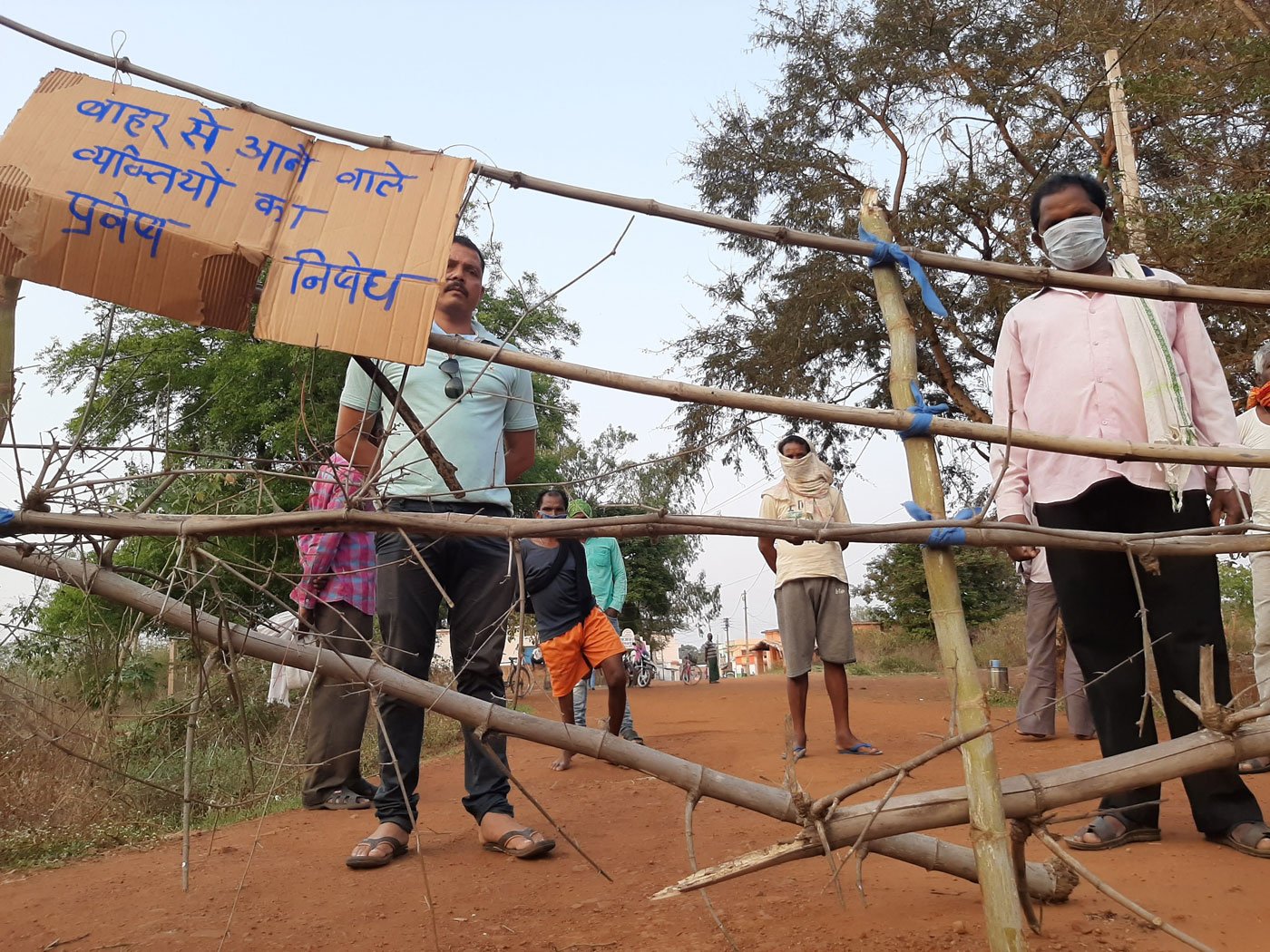 In Chhattisgarh: barricades as social distancing

Across parts of the Bastar region, people are setting up barricades denying entry to ‘outsiders’ – and restricting the access of even migrants returning to their own villages

‘Entry of outsiders is prohibited’ – reads the placards on the bamboo-made barricade at the entrance to Siyadehi village. When this reporter visited the village in Nagri block of Chhattisgarh’s Dhamtari district, a group of residents sitting nearby came close to the barricade to speak – but maintained a distance.

“We, the villagers, have decided unanimously to have this barricade to protect ourselves from the deadly coronavirus,” said Bharat Dhruv, who works as a lecturer at a government college in neighbouring Kanker district. Siyadehi, a mainly Gond Adivasi village of some 900 people, is about 80 kilometres from Raipur, the capital of Chhattisgarh.

“We want to maintain ‘social distance’. We don’t want outsiders visiting our village during this lockdown period, nor do we want to violate the rules ourselves by stepping out. Therefore, this barricade,” says Rajesh Kumar Netam, a marginal farmer and labourer in the same village.

“We are stopping all those coming here to avoid any contact. We request them to go back to their own villages,” said Sajjiram Mandavi, a farm labourer. “Some of our own youngsters had migrated to Maharashtra under a skills’ development project, but they returned before Holi,” he adds. “Nonetheless, health department officials have taken their details.”

What about other migrants from Siyadehi who return now? Would they be let inside? “Yes,” says Manoj Meshram, a panchayat official. “But as per the government’s guidelines, they have to undergo the quarantine period.” 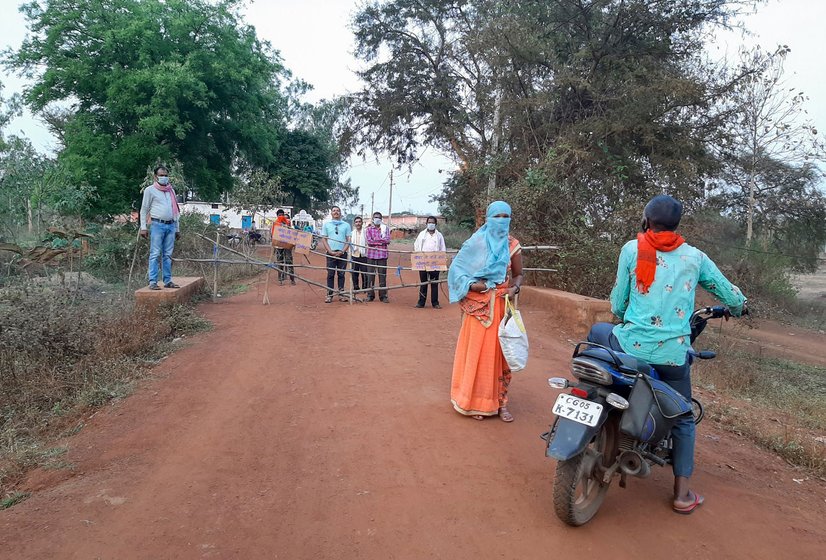 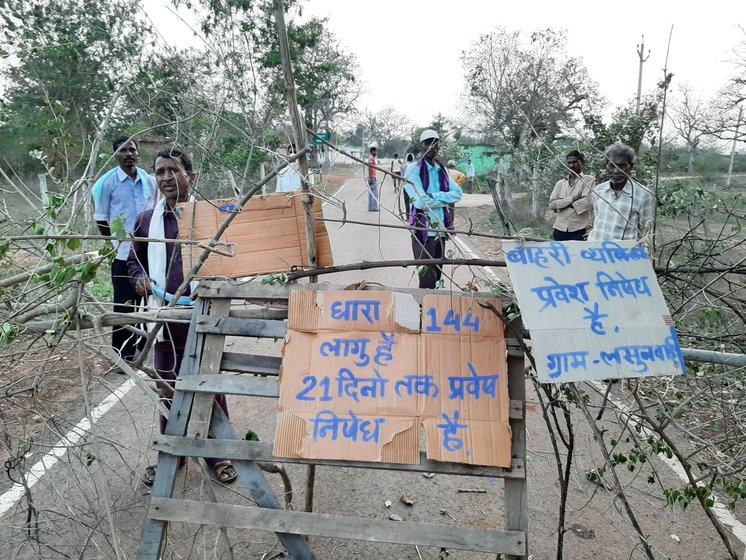 Left: In Siyadehi village of Dhamtari district, Sajjiram Mandavi, a farm labourer, says, 'We are stopping all those coming here to avoid any contact'. Right: We saw similar barricades in Lahsunvahi village, two kilometres from Siyadehi

However, across the country, there is confusion and great variance among states, district administrations and local officials in interpreting the quarantine rules declared by governments.

From where did the people of Siyadehi draw their information on the coronavirus threat? “From TV and newspapers and, later, we were informed by the administration,” says Meshram. Adding that “if we protect ourselves, our families and our village will also be protected.”

He informs us that though their earnings have been badly hit, “First, we need to be protected from this virus. This is the big issue. Afterwards, we will earn wages.”

They have heard of the ‘packages’ announced by the central government. However, say two or three people simultaneously, “we cannot say anything [about it] till we receive it.”

One villager was up a tree, doing some wiring. That, they explained, was for “lighting up the place as we will be guarding this barricade area till 9 p.m. in the evening.”

We saw similar barricades in Lahsunvahi, a village of some 500 people, just two kilometres from Siyadehi. Again, this is mainly a Gond tribal village. Here, the poster at the barricade read: ‘Section 144 is in force – entry is prohibited for 21 days’. Another poster simply said: ‘Entry of outsiders is prohibited’.

“We are stopping people from outside and especially urban or city people,” said Ghasiram Dhruv, a local farm labourer, at the barricade. Why city people? Because “they’re the ones who go abroad and because of them, this virus is spreading.”

Barricades like these are springing up at several villages across Bastar. 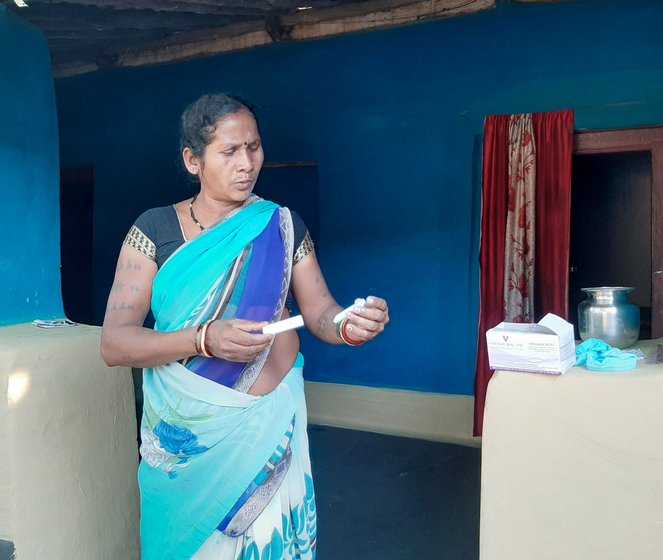 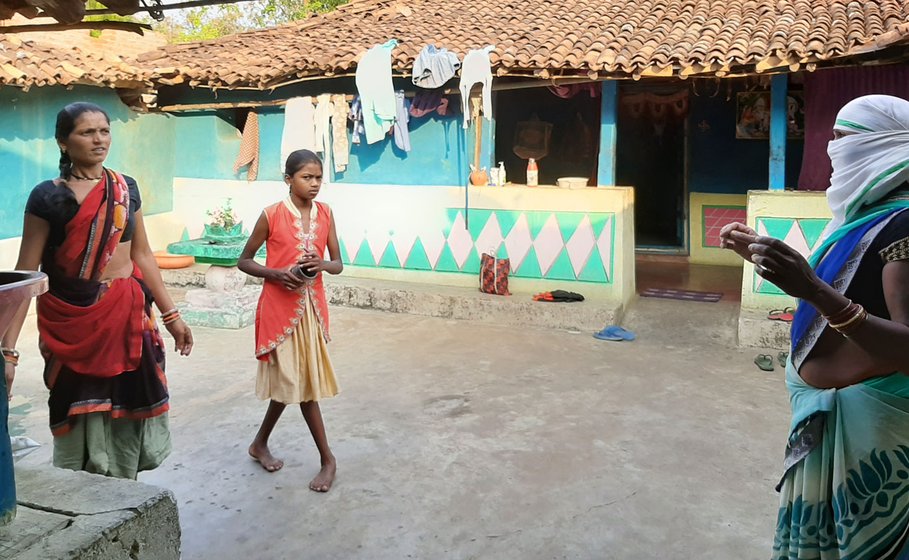 Mehtarin Korram is a mitanin (known elsewhere as an ASHA) health worker, thee frontline foot-soldiers of the healthcare system at the village level. She says, 'If I get scared, who will work?'

At Khadadah though, another village on the Dhamtari-Nagri road, there is no barricade. Here we ran into Mehtarin Korram, a mitanin (known elsewhere as an ASHA) health worker. She had just returned from the house of Anupa Bai Mandavi – a woman who had tested positive for malaria. Mehtarin had provided Anupa with medicines for that.

“We have been informed about the coronavirus pandemic,” she says. “I have personally visited each household and requested everyone to maintain social distancing. And also told them to wash their hands regularly.” Did she inform them of that in a meeting? “No. If we have a meeting people will sit next to each other… Ours is a small village with just 31 households. So I did it by visiting each house.”

She and her colleagues stay alert on the issue of social distancing.  On one occasion, she says, “There was an after-death ritual at Ashok Markam’s home in Kumhada village. So I, together with mitanin from Banraud, Kumhada and Mardapoti, went there and asked the family members and their relatives to keep a distance from each other. We stood there the entire day till the condolence ritual got over.”

And the precautions she takes in this period? “We cover our faces with a scarf or towel and wash our hands with soap or Dettol liquid.”

But, she confirms, they have no masks.

The mitanin or ASHA workers are the frontline foot-soldiers of the healthcare system at the village level. They are even more important in villages where doctors or other medical personnel are rarely seen. That they are without personal protection kits makes them a lot more vulnerable in this period.

Mehtarin Markam isn’t scared, though: “If I get scared, who will work? If somebody is ill, I have to go to them.”