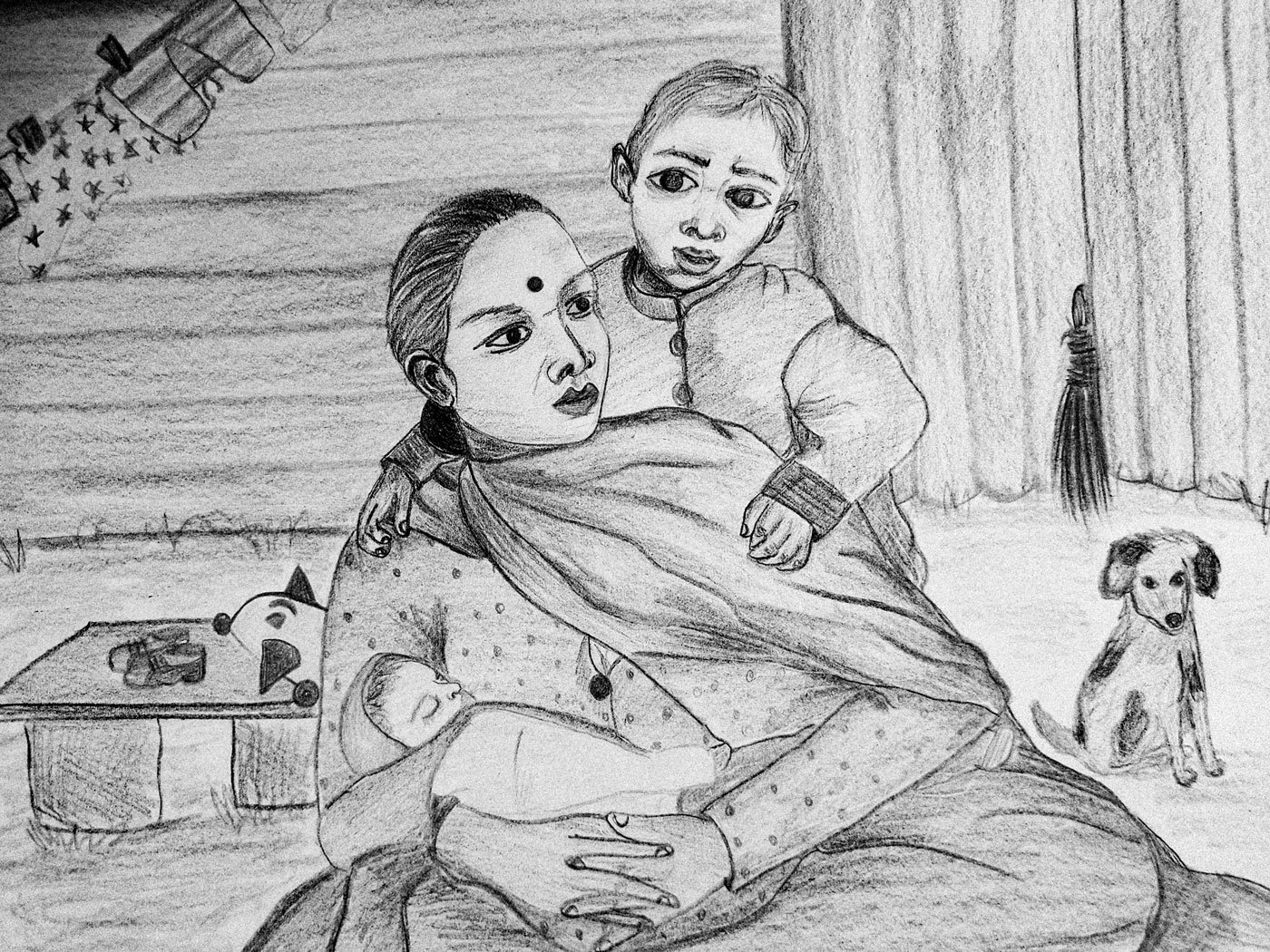 Birthing in the backseat of a Bolero

“That afternoon I was not certain if my baby and I would survive. My water had broken. There was no hospital in sight, no health worker around. I was in labour inside a moving jeep on the way to a hospital in Shimla. There was no way I could have waited. I gave birth to the baby right there – inside the Bolero.” Six months after the event, when this reporter met her in April 2022, Anuradha Mahto (name changed) was sitting with her little baby on her lap, still remembering the day in vivid details.

“It was about three in the afternoon. As soon as my water broke my husband informed ASHA didi . She arrived in the next 15 or 20 minutes. I remember her calling for an ambulance soon after. It was raining that day. The ambulance people said that they would leave in 10 minutes, but it would have taken them at least an hour more than usual to reach our place,” says Anuradha, in her late 20s, explaining how the roads get dangerous when it rains.

She lives in a makeshift tin hut in a hilly area in Koti village, Himachal Pradesh, along with her three children and her husband, a migrant worker. The family is originally from Gopalpur village in Bhagalpur district of Bihar.

Anuradha, who joined her husband in Koti, in Shimla district’s Mashobra block, in 2020, says, “We had to move here from our village [in Bihar] because of financial problems. It was difficult to pay the rent in two places.” Her 38-year-old husband, Ram Mahto (name changed), works as a mason on the construction site and must move wherever his work takes him. Presently, he has been working at a site right ahead of their tin hut.

Even on normal days it would be difficult for an ambulance to have an easy access to their house. And if it were to come from Kamla Nehru Hospital in the district headquarters, Shimla, about 30 kilometres away, it would take 1.5 to 2 hours to reach Koti. But during rains and snowfall it takes double that time. 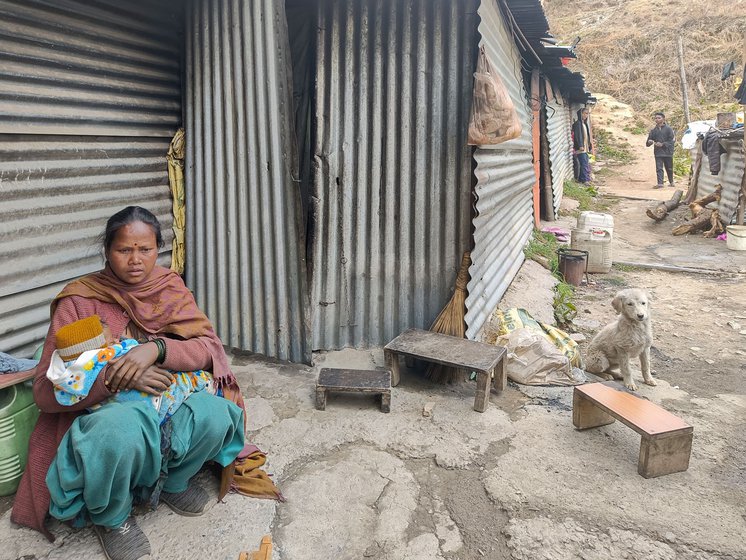 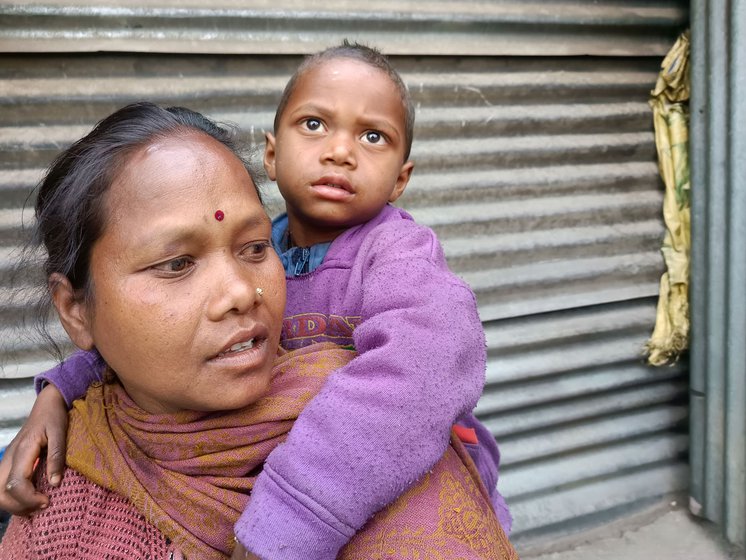 Left: Anuradha sits with six-month-old Sanju outside her room. Right: Anuradha with her older son

About seven kilometres from Anuradha’s house is a community health centre (CHC) that serves close to 5,000 people from nearby villages and hamlets, says Reena Devi, an Accredited Social Health Activist (ASHA) in the area. But hardly anyone approaches the CHC as it is lacking in facilities – even mandatory essential services like a 24-hour ambulance. “When we dial 108, the vehicle never comes easily in one call. It is a tough job to get an ambulance here. They try to convince us to arrange vehicles on our own, instead,” she adds.

Ideally, a CHC, with a team of an obstetrician-gynaecologist and 10 staff nurses, should be able to offer essential and emergency obstetric care like a caesarean section and other medical interventions. All emergency services are supposed to be available round the clock. In Koti, however, the CHC closes by six in the evening, and there is no gynaecologist on duty even when it is open.

“The labour room has been converted into a kitchen for the staff since it’s not functional,” says Harish Joshi, a shopkeeper in the village. “Even my sister suffered the same way and she had to deliver at home under a midwife’s supervision. That was three years ago, but the situation is still the same. Whether the CHC is open or closed does not make a difference in such cases,” he adds.

The midwife who lives in the village was of no help to Anuradha, says Reena. “She does not like visiting homes of people who belong to other castes,” suggests the ASHA worker. “That is why we had decided to go to the hospital since the very beginning,” adds Reena, who had accompanied Anuradha on the day she gave birth.

“After almost 20 minutes of waiting, when my pain worsened,” says Anuradha, “ASHA didi discussed with my husband and decided to take me to Shimla in a hired vehicle . The charge was 4,000 rupees each way. But 10 minutes after we started from here, I gave birth in the backseat of the Bolero.” Anuradha’s family was still charged the full amount for the ride to Shimla that they could not make. 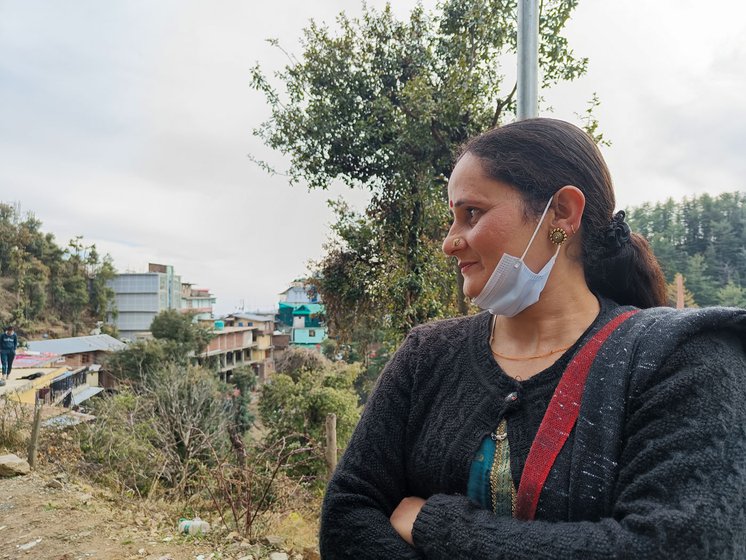 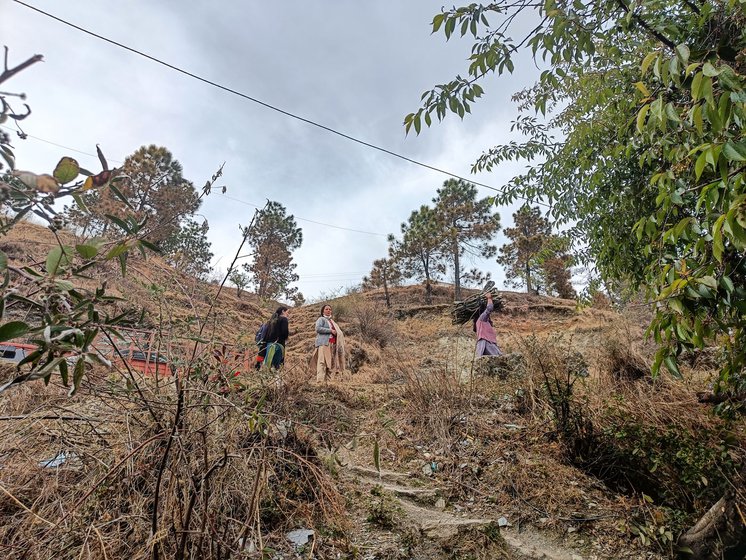 Left: Reena Devi, an ASHA worker in the village, still makes regular visits to check on Anuradha and her baby boy. Right: The approach road to Anuradha's makeshift tin hut goes through the hilly area of Koti village

“We would have covered barely three kilometres when the baby was born,” says Reena. “I had ensured that we had some clean cloth, water bottles and an unused blade with me. Thank God for that! I had never done it myself before – cutting the umbilical cord. But I had seen how it was done. So I did for her,” says the ASHA worker.

Anuradha was simply lucky to have survived the night.

In spite of a remarkable improvement in absolute number of maternal deaths, globally, more than 800 women continue to die every day due to complications of pregnancy and childbirth, says the World Health Organization. The majority of the deaths occur in low- and middle-income countries. In 2017, India accounted for 12 per cent of global maternal deaths.

Maternal mortality ratio (MMR) in India – maternal deaths per 100,000 live births – was 103 in 2017-19. The reported number is still a way off from the UN’s Sustainable Development Goal (SDG) to reduce global MMR to 70 or less by 2030. The ratio is a key indicator of health and socioeconomic development; a higher number shows resource disparity.

Data around maternal mortality in Himachal Pradesh is not easily available. Though the state is ranked second, with Tamil Nadu, in NITI Aayog’s SDG India Index 2020-21, its high ranking does not reflect the maternal health issues of rural women living in distant, hilly areas in poverty. Women like Anuradha face problems of nutrition, maternal well-being, postnatal care and health infrastructure.

Ram, Anuradha’s husband, works as a construction labourer with a private company. During months when there is work, he “makes around 12,000 rupees per month, out of which 2,000 rupees are deducted as house rent,” says Anuradha as she invites me inside her house. “Everything inside belongs to us,” she says.

A lone wooden bed, and an aluminium trunk covered with little piles of clothes and vessels that converts into a bed, take up most of the space in her 8 x 10 feet tin room. “We barely have savings. If there is a health issue or some other sort of emergency, we must cut on necessary expenses like food, medicines and milk for the children, and borrow,” Anuradha says. 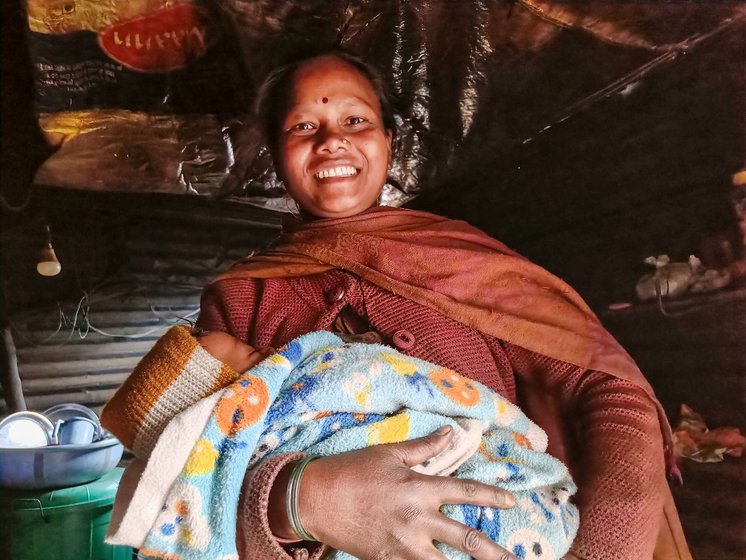 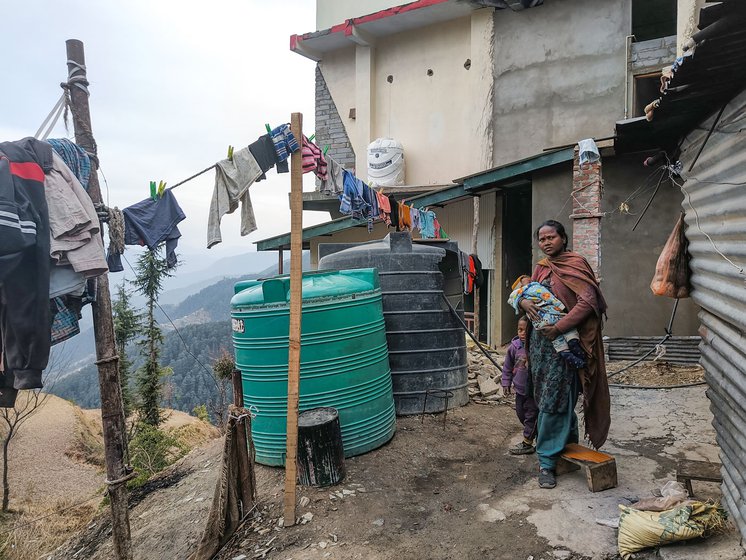 Left: Anuradha inside her one-room house. Right: Her family has to live in little rented rooms near construction sites, where her husband works

Her pregnancy added to their financial stress in 2021, especially with the Covid-19 pandemic raging in the country. There was no work for Ram. He received Rs. 4,000 in the name of wages. The family still had to pay the rent and live on the remaining Rs. 2,000. The ASHA didi supplied iron and folic acid tablets to Anuradha, but regular check-ups were an impossibility given the distance and the cost involved.

“Had the CHC been functioning well, Anuradha would have had a stress-free childbirth and she wouldn’t have had to spend 4,000 rupees on taxi,” says Reena. “The CHC has a designated labour room, but it is non-operational,” she adds.

“We understand the challenges women must be facing due to unavailability of [child] delivery facilities in CHC Koti, but things are not in our control because of staff shortage,” says Surekha Chopda, chief medical officer of Shimla district. “There is no gynaecologist, nurse or sufficient cleaning staff needed to handle the deliveries. Doctors don’t wish to be posted in rural areas like Koti, which remains the bitter truth of districts and states throughout the country,” she adds.

Despite an increase in the number of CHCs in the state, from 66 in 2005 to 85 in 2020 – and in the number of specialist doctors, from 3,550 in 2005 to 4,957 in 2020 – the shortfall in obstetrician-gynaecologists in rural areas of Himachal Pradesh is 94 per cent according to Rural Health Statistics 2019-20. In other words, only 5 obstetrician-gynaecologists are in position instead of the required 85. This translates into enormous physical, emotional and financial stress for pregnant women.

Shila Chauhan, 35, who lives around six kilometres away from Anuradha’s house, also travelled all the way to a private hospital in Shimla to give birth to her daughter in January 2020. “I am still in debt months after giving birth,” Shila tells PARI.


She and her 40-year-old husband, Gopal Chauhan, who works as a carpenter in Koti village, had borrowed Rs. 20,000 from their neighbours. After two years, they still owe them Rs. 5,000. 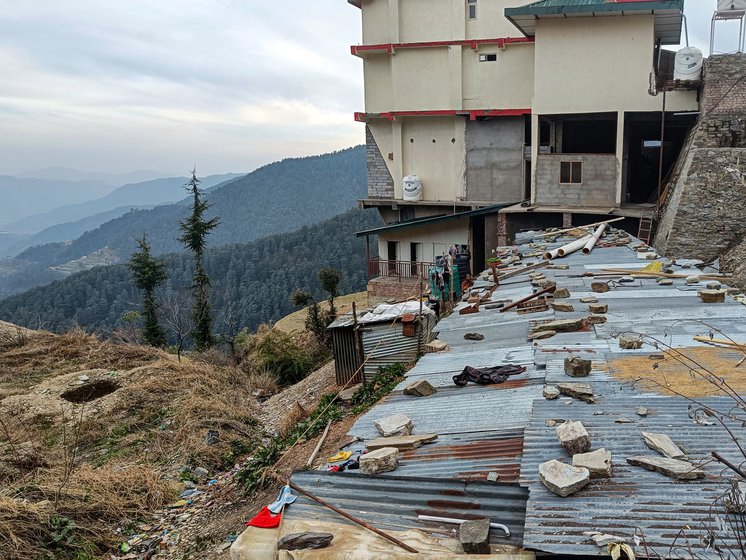 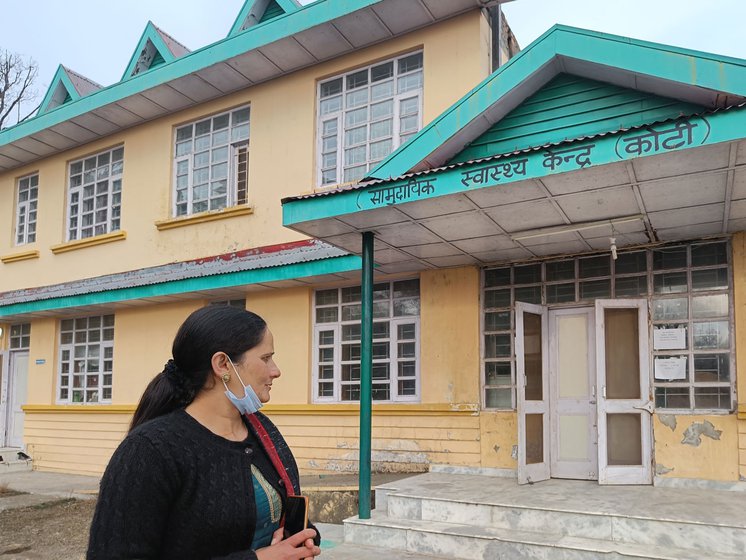 Left: The construction site, right beside their house, where Ram was working in April this year. Right: Reena Devi at CHC Koti

Shila could not spend more than one night in the Shimla hospital as the daily room rate was Rs. 5,000. The next day, she, Gopal and the infant left for Koti in a private taxi they hired from Shimla for Rs. 2,000. The taxi dropped them at a point before the destination, refusing to go further because of the snow-filled lanes. “To think of that night still gives me goosebumps. It was snowing a lot, and I was walking in knee-deep snow just a day after I had given birth,” says Shila.

“If this CHC had been working properly, we would not need to run to Shimla and spend all that money, nor would my wife have had to walk through snow within a day of childbirth,” Gopal adds.

If the health care facility had functioned as it should, both Shila and Anuradha could have received completely free and cashless health services under the Janani Shishu Suraksha Karyakaram, Through the government scheme, they would have been entitled to free child birthing facilities, including for caesarean section, in public health institutions. They could have also availed medicines and consumables, diagnostics, diet, and blood if required – and transport too – all at no personal cost. But everything remained on paper.

“We were very scared for our two-day-old daughter that night,” says Gopal, “she could have died due to the cold.”