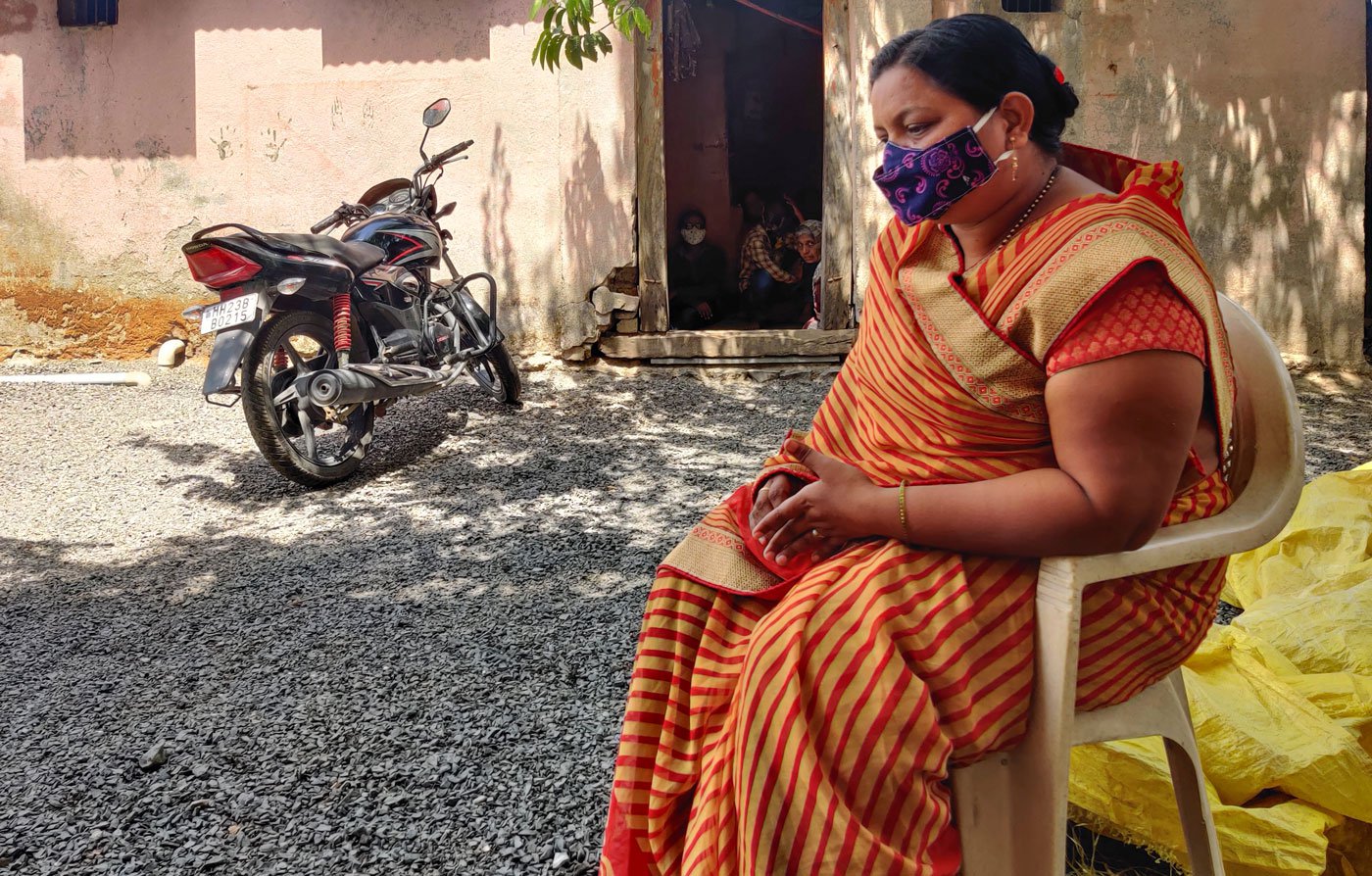 “I don’t know what finally caused her death but I know she did not get the attention she deserved.” Subash Kabade says this, describing his sister’s death.

The night before his sister, Lata Survase, died in the Civil Hospital in Maharashtra's Beed city, a doctor had prescribed two injections to be urgently given to her. So Subash rushed to the medical store just outside and returned with the injections within minutes. But the physician was gone by then.

“He had too many patients to attend to so he moved on to the next ward,” says 25-year-old Subash. “I told the nurse to give my sister the injections but when she looked at Lata’s file, she found no mention of them. I tried to tell her that they were prescribed just a few minutes ago and wouldn’t be in the file.”

But the nurse did not listen to him. When he frantically begged for the injections to be given, “the person in charge of the ward threatened to call the security,” says Subash. Almost an hour was lost in trying to clear up the matter before the injections were given to the patient.

Lata died the next morning, on May 14. She had been in the hospital since April 23, the day she tested positive for Covid-19. “She showed signs of recovery now and then,”says Subash, a lawyer in Beed city. He isn’t certain if the injections, had they been given on time, could have saved her life. But he is sure that the hospital is highly understaffed. “It is affecting the patients,” he says.

The rapid spread of the second wave of Covid-19, which began in March this year, has highlighted the overburdened public health infrastructure in rural India. Short-staffed hospitals, worn-out health workers, and patients deprived of good treatment sum up the state of medical care available to several lakhs of people in the countryside. 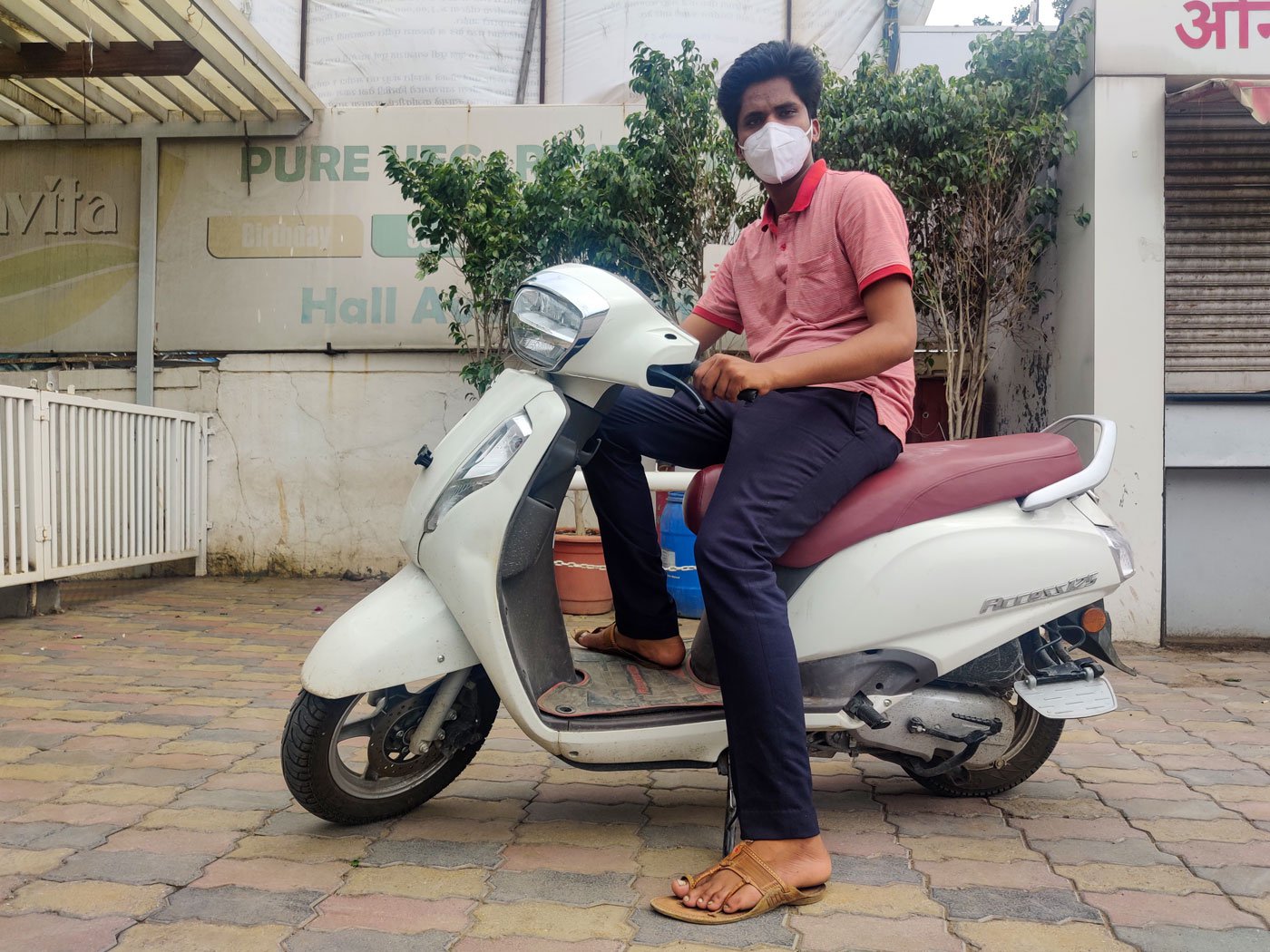 Subash Kabade, whose sister died in the Beed Civil Hospital, says that the shortage of staff has affected the patients there

The impact of the second wave was severe in Beed, which is located in Marathwada, a region already grappling with climate change, water scarcity and an agrarian crisis. As on June 25, 92,400 positive cases and nearly 2,500 deaths deaths were recorded in the district. But the number of cases rapidly rose when the second wave peaked – from about cases 26,400 recorded on April 1 to over 87,400 on May 31. Beed's healthcare system crumbled under the caseload.

Most people in Beed opt for treatment at a public facility because of the free healthcare. This is especially so because debt from a prolonged farming crisis has left the predominantly agrarian district, which has a population of more than 26 lakhs, in poverty and distress.

Out of the district's 81 Covid Care Centres, where patients with mild symptoms are first sent, all except three are run by the state government. Patients who don’t recover there are transferred to a Dedicated Covid Health Centre. There are 45 DCHCs in Beed but only 10 are state-run. The administration manages five of the 48 Dedicated Covid Hospitals where critical cases are treated.

The government facilities, however, are severely understaffed.

Even at the peak of the second Covid wave, the state-run Covid centres in Beed did not have enough healthcare workers. The district administration had approved the appointment of temporary staff but many of the posts were not filled.

According to Radhakrishna Pawar, the district health officer (DHO), out of the 33 approved physician posts only nine were recruited. All of the 21 posts for anaesthetists remained vacant. Of the 1,322 staff nurses and 1,004 ‘ward boys’ (ward assistants) posts, 448 and 301, respectively, were not filled.

In total, of the 3,194 approved positions in 16 categories, 34 per cent – 1,085 posts – were vacant, which put the existing staff under tremendous pressure. 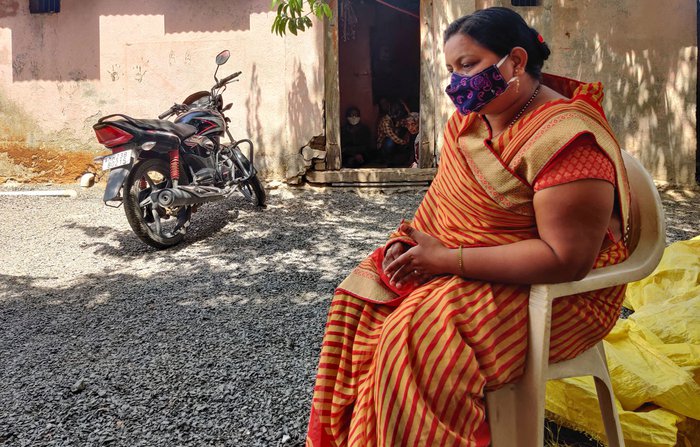 Jyoti Kadam's husband, Balasaheb, died the day after he was admitted to the hospital

The number of cases rapidly rose when the second wave peaked – from 26,400 cases recorded on April 1 to over 87,400 on May 31. Beed's healthcare system crumbled under the caseload

So when 38-year-old Balasaheb Kadam found a ventilator bed in the Beed Civil Hospital, his relatives had to carry the oxygen cylinder from the public hospital’s storage room to the ward. “There was no member of the staff around and his oxygen levels were dipping,” says his wife, Jyoti, 33. “His brother carried the cylinder on his shoulder and got the ward assistant to fix it.”

But Balasaheb did not survive. The deputy sarpanch of Yelambghat village, 30 kilometres from the city, Balasaheb “used to be out and about all the time,” says Jyoti. “People would come to him with their problems.”

Balasaheb was spreading awareness about the vaccines in Yelambghat, adds Jyoti, a schoolteacher in the village. “He was trying to ensure that people didn’t have doubts about them. So he was going door to door.” Jyoti believes that it was during one of those times that he was infected with the coronavirus. She will now have to bring up their two daughters, aged 14 and 9 years, on her own.

On April 25, Balasaheb began to feel shortness of breath, an indication of the infection. “The day before that, he was working in our farm. He did not have any co-morbidities but he died within a day at the hospital [on April 26],” says his father Bhagwat Kadam, 65. “He was scared. At such times, patients need doctors to tell them they will be okay. But doctors don’t have time for that now.”

Even if it risks infection, the family members of Covid patients insist on being their caretakers in the ward, especially when they see that the hospital is short of staff. At Beed Civil Hospital, where the authorities have been trying to keep relatives away, arguments regularly break out between patients’ relatives, the hospital staff and the police. 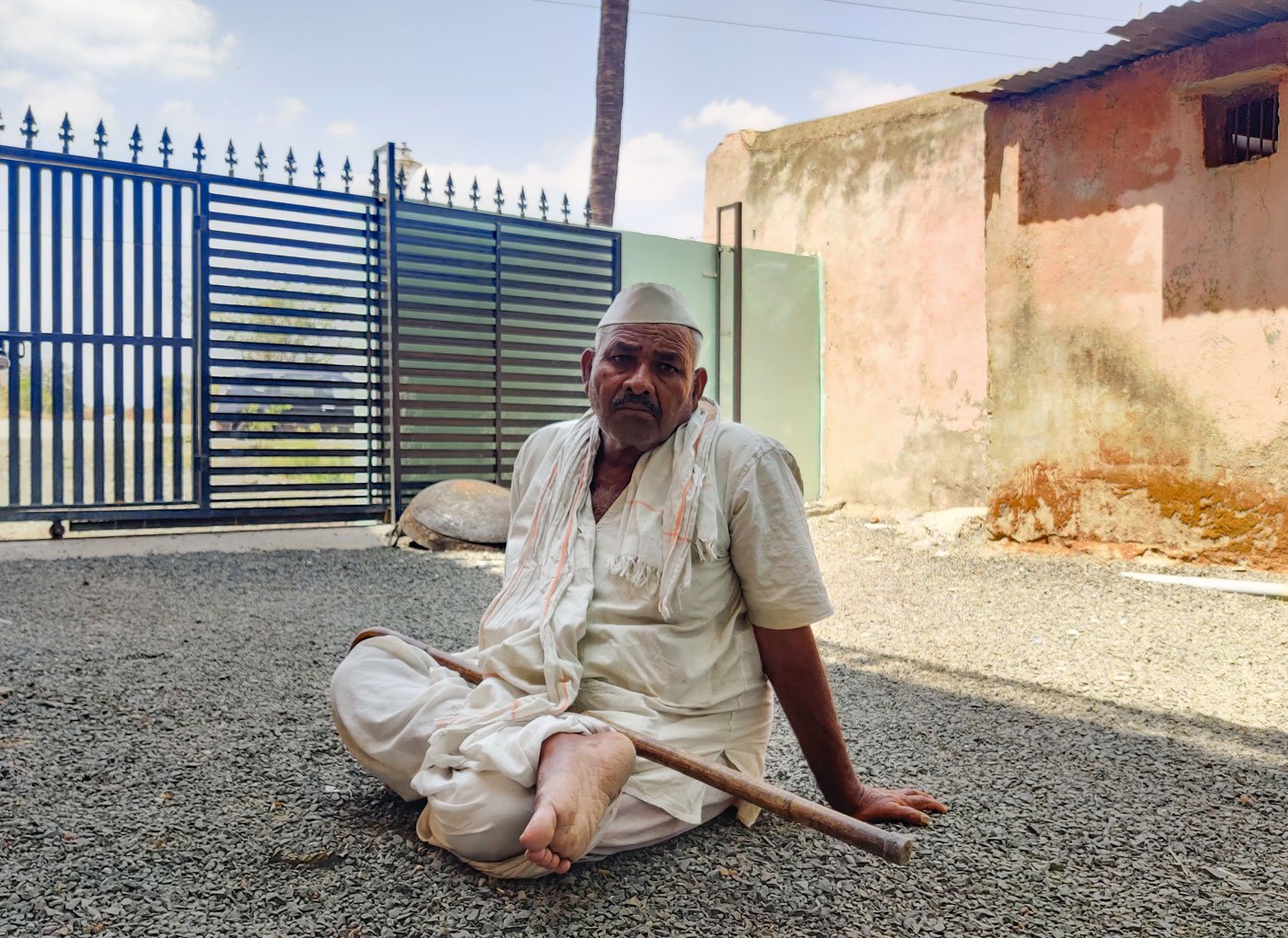 Bhagwat Kadam, Balasaheb's father, says his son was scared but the doctors didn't have time to assuage his fears

The family stays close even after being driven away, waiting for an opportunity to sneak in and see their loved one. “We wouldn’t have to do it if we knew our dear ones were being taken care of,” says 32-year-old Nitin Sathe, sitting on motorbike outside the hospital. “Both my parents are over 60 years old and both are in the hospital. No one will ask them if they want water or if they are hungry.”

It is important to protect the mental state of a scared patient, says Sathe, who works as a bank clerk in the city. “If I am around, I can attend to them, I can reassure them. That will strengthen their mental resolve. When you are left to yourself, you start thinking of all the bad things that could happen. It affects your recovery.”

Sathe points out the irony: “On the one hand, we are forced to stay outside the hospital. On the other, they don’t have enough staff to look after the patients.”

In the second week of May, the lack of staff landed the district administration in an embarrassing spot after a local journalist discovered that a significant number of Covid-19 deaths were missing from the official count.

Somnath Khatal, a 29-year-old reporter for Lokmat newspaper, verified the number of people who were cremated at the crematoriums and compared it with the official figures. He found a difference of 105 deaths. “Within a week of the newsbreak, the district administration had to adjust over 200 deaths in the official figures. Some of them were from 2020,” he says.

DHO Pawar admits the mistake, attributing it to the lack of staff. It was not due to an attempt to downplay the number of cases, he adds. “We have a system in place. Once a person tests positive for Covid-19, we receive a notification at the backend of the Covid portal. The facility where the patient is admitted is supposed to update the entry with the treatment and its outcome,” explains Pawar. 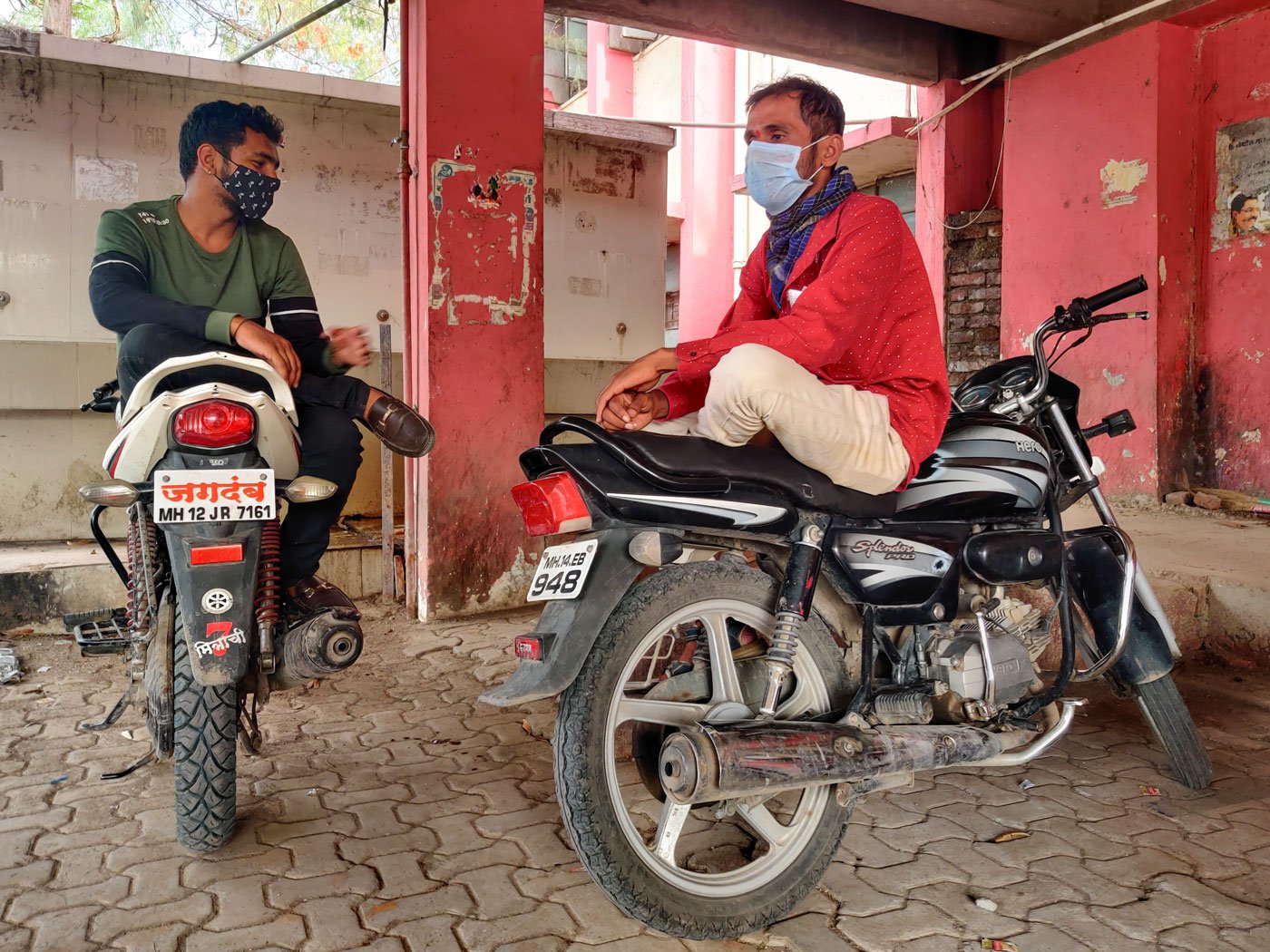 But when the number of Covid patients suddenly increased from 25-30 to about 1,500 per day in April, “no one paid attention to the entries in the midst of the overload,” says Pawar. “They were treated as Covid-19 patients, but some of the deaths were just not updated in the portal. We have accepted our mistake since the news report [was published] and updated the number of deaths in the district.”

Though it accepted the mistake, the district administration took the extreme step of initiating action against Subash for allegedly breaking Covid protocols and “dishonouring the dead body” of Lata.

“The hospital staff did an antigen test [on the dead body], which came back negative,” says Subash. “So they allowed me to take the body home.”

Subash had asked the hospital if he could take his sister’s body to her village, Kumbharwadi, in Beed’s Georai taluka , about 35 kilometres from the city. Lata lived there with her husband, Rustum, and their four-year-old son Shreyas. “It was the family’s wish. We wanted to give her a decent funeral.”

But when they were halfway to Kumbharwadi, the hospital phoned Subash, telling him to return with the body. “I told my relatives that we must cooperate with the administration because these are tough times. We took a U-turn and came back with the body.”

But the Civil Hospital filed a first information report charging Subash under the Epidemic Diseases Act, 1897. “If a Covid patient dies at the hospital, there are protocols to be followed. And the relatives in this case broke those protocols,” says Ravindra Jagtap, district magistrate of Beed, adding that the antigen test meant nothing. 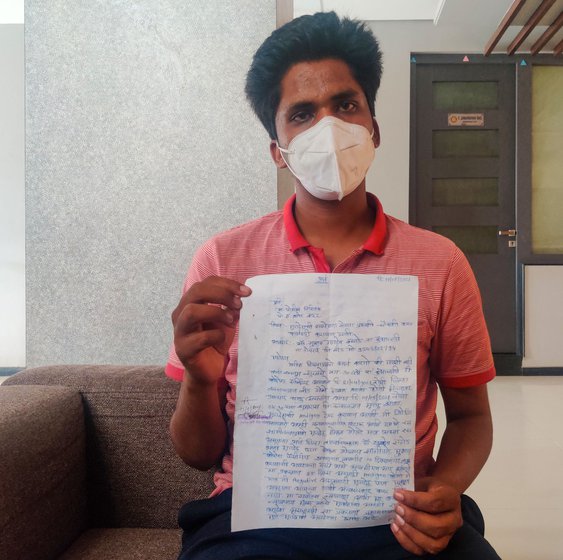 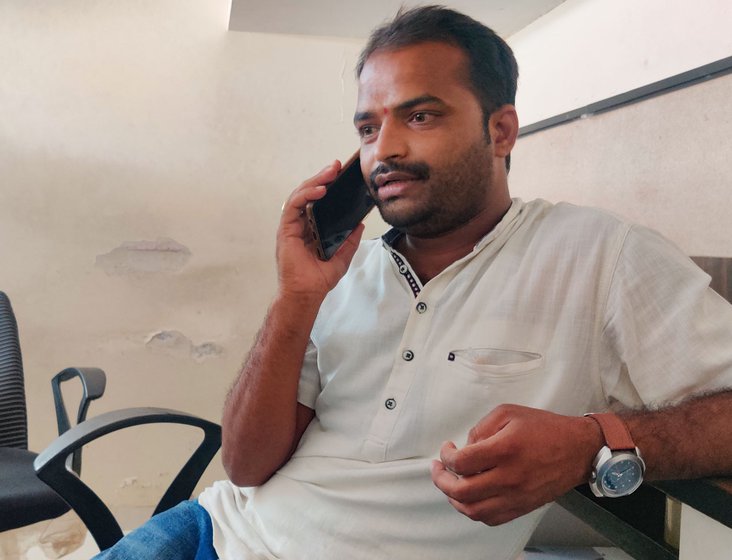 Left: Subash Kabade shows his letter to the district collector explaining his side in the hospital's complaint against him. Right: Somnath Khatal, the journalist who discovered the discrepancy in official number of Covid deaths reported in Beed

Covid protocols require the dead body of a Covid patient to be wrapped in a leak-proof body bag and be directly taken from the hospital to the crematorium for cremation.

Subash says that he took Lata’s body only because the hospital allowed him to. “I am an advocate. I understand the protocols. Why would I go against the hospital and risk my family’s health?”

He is dejected that the hospital didn’t consider the help he provided to its patients and staff in the past. “I must have helped at least 150 patients get admitted at the hospital. Several patients don’t know how to read or write, and they are scared. I helped them fill up forms and to find their way around the hospital. I did what the hospital staff was supposed to do,” says Subash.

Even before Lata had taken ill, Subash was helping patients with the admission process at the Civil Hospital. He says he spent entire days for a month and a half in total, including the weeks his sister was in hospital.

During his time in the hospital taking care of his sister, he once picked up a Covid patient from the floor and put her back on the bed, he says. “She was a senior citizen. She fell off her bed and was lying on the floor but nobody paid any attention. This is the condition of the patients in the hospital.”

A distraught, dejected and angry Subash met me in the lobby of a hotel in Beed because he couldn’t invite me home. “My parents are in shock since my sister died,” he says. “They are not in a position to talk. Even I have not been in my senses. Lata’s son keeps calling me and asks ‘When will aai come home?’ I don’t know what to tell him.”