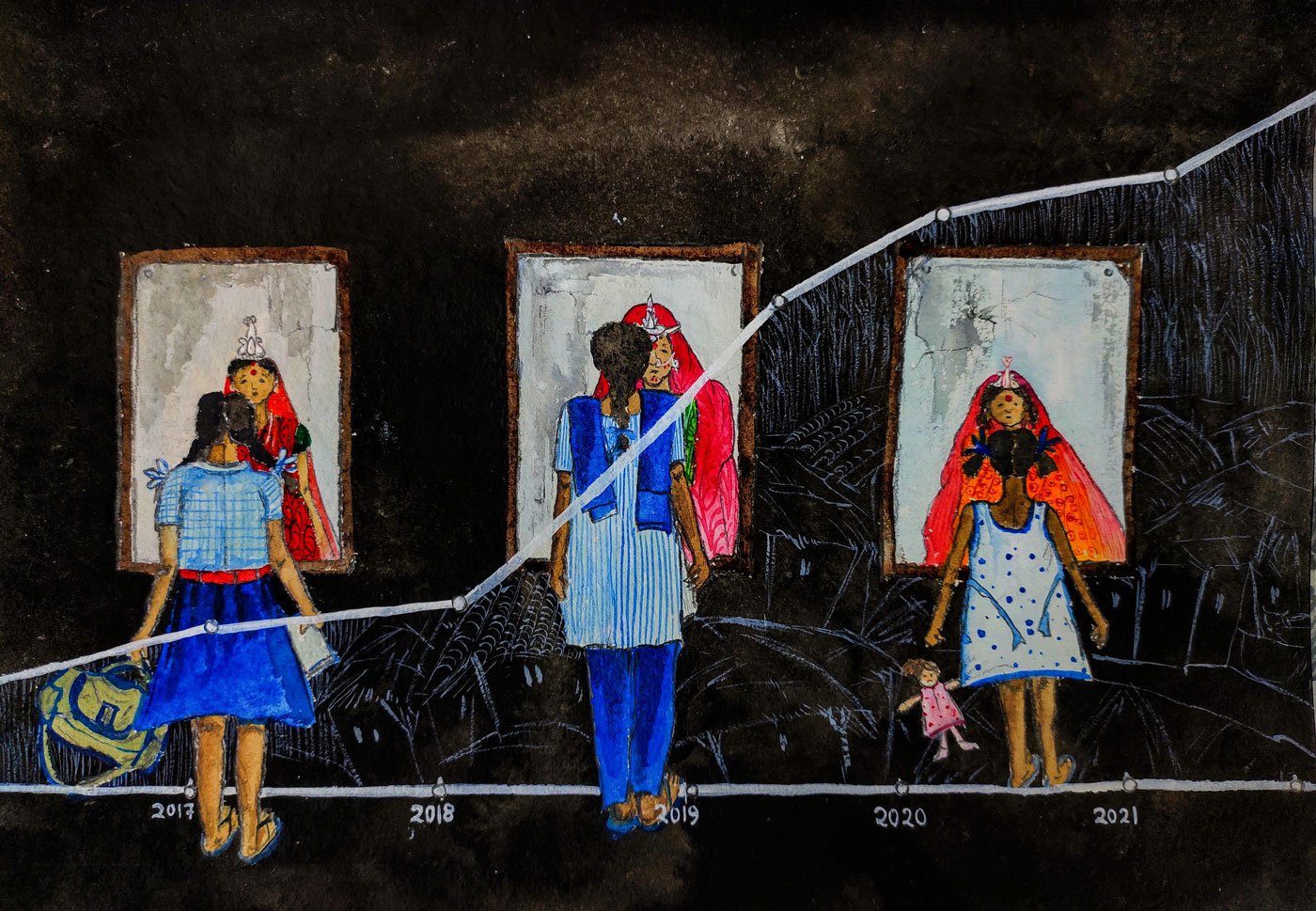 The pandemic is making an already difficult situation worse for teenagers like Rekha in Maharashtra's Beed district. Rising poverty, school closures and other factors are forcing girls into early marriage

It was 10 days before Rekha realised she had no option other than to get married. She had resisted as much as a 15-year-old could but her parents didn’t take any of it seriously. “She cried and said she wanted to study more," says Bhagyashree, her mother.

Bhagyashree and her husband, Amar, both in their late 30s, live with their children in an impoverished village in Maharashtra’s Beed district. Around November every year, they migrate to western Maharashtra or Karnataka to cut sugarcane. After six months of gruelling labour in the fields, they earn Rs. 80,000 between them. With no land to their name, cutting cane is the only source of income for the family, which belongs to the Matang caste, a Dalit community.

Each time her parents migrated, Rekha and her siblings, aged 12 and 8, were left in the care of their grandmother (she died in May last year). They attended a government school just outside the village. But when the pandemic forced schools to shut in March 2020, Rekha, who was in Class 9, had to stay home. More than 500 days on, schools in Beed continue to be closed.

“We realised that the schools were not going to open any time soon,” says Bhagyashree. “When the school was open, there were teachers and children around. The village was busier. With the school shut, we couldn’t leave her behind because of safety concerns.”

So Bhagyashree and Amar got Rekha married to 22-year-old Aditya in June last year. His family was from a village 30 kilometres away, and they were seasonal migrant workers too. In November 2020, when the sugarcane-cutting season was about to start, Rekha and Aditya migrated to western Maharashtra – leaving just her name behind in the school register.

Adolescents like Rekha and girls younger to her are being pushed into marriages because of the pandemic. A UNICEF report released in March 2021, titled COVID-19: A threat to progress against child marriage , warns that by the end of the decade, an additional 10 million girls globally would be at risk of becoming child brides. School closures, rising poverty, parental deaths and other factors resulting from Covid-19 “has made an already difficult situation for millions of girls even worse,” the report notes.

In the last 10 years, the proportion of young women married as children had decreased by 15 per cent, and about 25 million child marriages were averted around the world, adds the UNICEF report. The pandemic has become a threat to the progress made in recent years, even in Maharashtra. 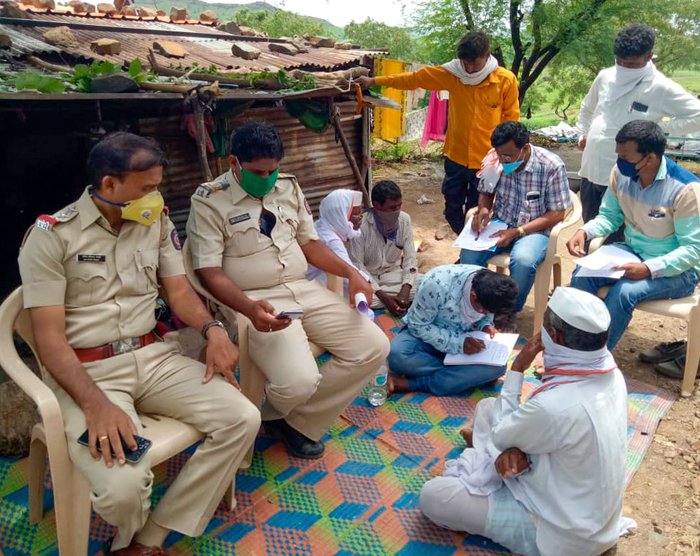 Activists and the police intercepting a child marriage in Beed

The Maharashtra government's Department of Women and Child Development recorded 780 child marriages that were intercepted in the state from April 2020 to June 2021. It is a conservative estimate, say Tangde and Kamble

However, despite evidence that child and adolescent marriages have been on the rise during the pandemic, the state government has not taken proactive steps to prevent them. Tatwashil Kamble, a 34-year-old activist in Beed, says, when it comes to children and the youth, the state government has been focusing on online classes, which are accessible only to children whose parents can afford privileges like a smartphone and a good internet connection.

Just 18.5 per cent of rural households in Maharashtra had internet facility, noted a report of the 2017-18 National Sample Survey. Nearly 17 per cent of persons (aged 5 years and above) in rural Maharashtra had the “ability to use internet,” the report said, but the ratio was 11 per cent among women.

Most of the children lacking access to internet belong to marginalised communities, where poverty and material insecurity had already been pushing girls into early marriage. And the closure of schools has made the situation worse, which is evident in Beed.

Nearly 44 per cent of women aged 20-24 in Beed said in 2019-20 that they were married before they turned 18 (NFHS-5). The main reason is people’s dependence on migrant work – especially seasonal work like cutting sugarcane – due to drought and agrarian distress in the district.

Contractors recruiting workers for sugarcane cutting prefer to hire married couples as the job requires two people to work in tandem – one to chop the cane and the other to make bundles and load them on the tractor. The couple is treated as one unit, which makes it easy to pay them as such and avoids conflict among two non-related workers. A girl can travel and earn with her spouse after getting married. That way, parents feel, she would be safe with her husband, and it would ease their financial burden at the same time.

Parents struggling financially in the pandemic have responded in one of two ways to their child being at home, says Tatwashil Kamble, “If it’s a boy, he has been forced into child labour. For a girl, it is child marriage.” As a member of the Child Welfare Committee, a statutory body that looks into the care and protection of children in need, Kamble has helped prevent many early marriages in Beed. 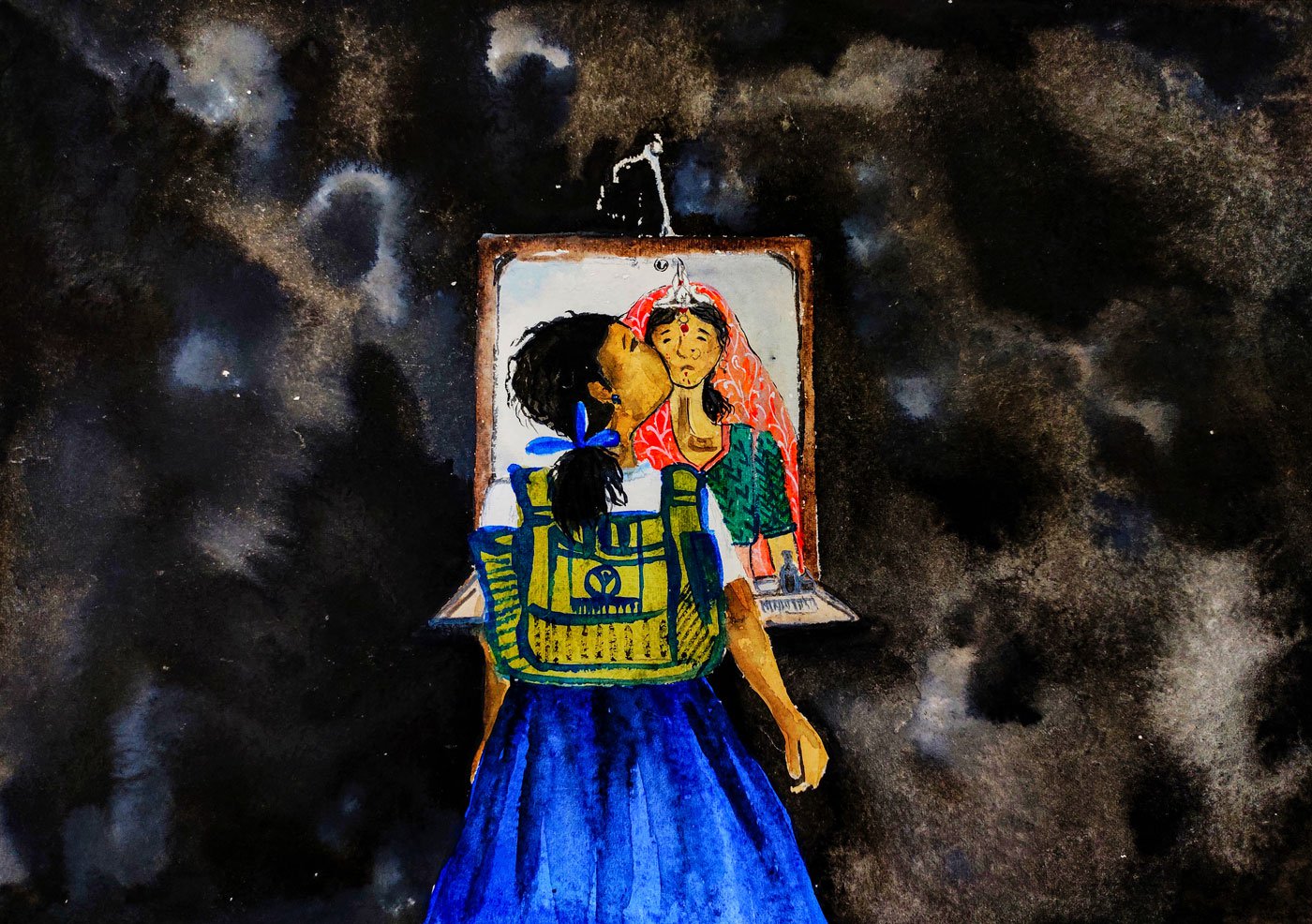 Together with Ashok Tangde, a member of Beed taluka ’s Child Protection Committee, which works to prevent child marriage and child labour, Kamble has stopped more than 100 child marriages since the outbreak of Covid-19 in March 2020. “Those are just the ones we have managed to catch,” says Tangde, 53. “We don’t know how many have fallen through the cracks.”

People’s reduced purchasing power in the pandemic is playing a role in early marriages. “Parents of grooms are not insisting on higher dowry,” says Tangde. Weddings have become cheaper, he adds. “You can get away by inviting only close family members because large gatherings are not allowed now.”

On the other hand, fears around mortality, heightened by the pandemic, have parents worrying about their daughter’s fate if they died. “All of this has contributed to the increase in child marriages. Some of the girls being married off are as young as 12,” says Tangde.

The Maharashtra government's Department of Women and Child Development recorded 780 child marriages that were intercepted in the state from April 2020 to June 2021. It is a conservative estimate, say Tangde and Kamble, pointing to the official count of 40 in Beed – much less than the number of weddings they prevented in that period.

Even the conservative estimates raise an alarm about the increase in child and adolescent marriages during the pandemic. From January 2019 to September 2019, according to the state government data, 187 child marriages were intercepted in Maharashtra. This indicates an increase of 150 per cent in the monthly average of intercepted child marriages after the Covid-19 outbreak.

Kamble and Tangde rely on informants to stop the weddings. “The ASHA workers or gram sevaks in the village tip us off,” says Kamble. “But they are often scared because they live in the same village. If the families performing the marriage find out, they can make the informant’s life difficult.” 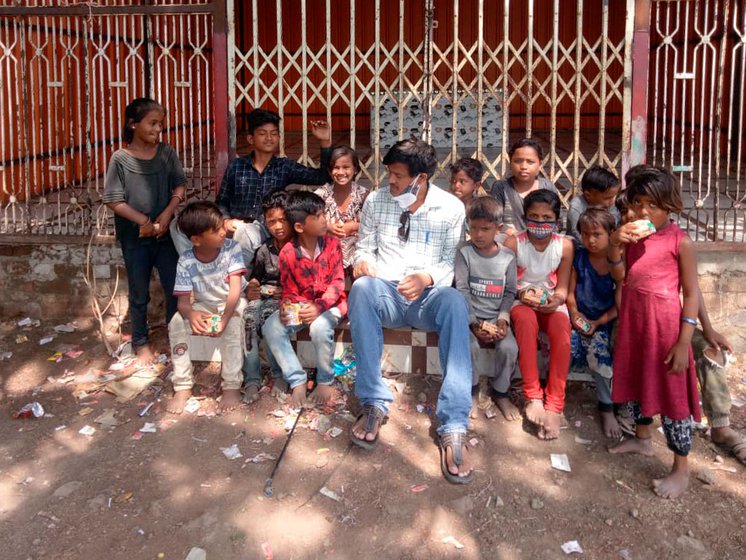 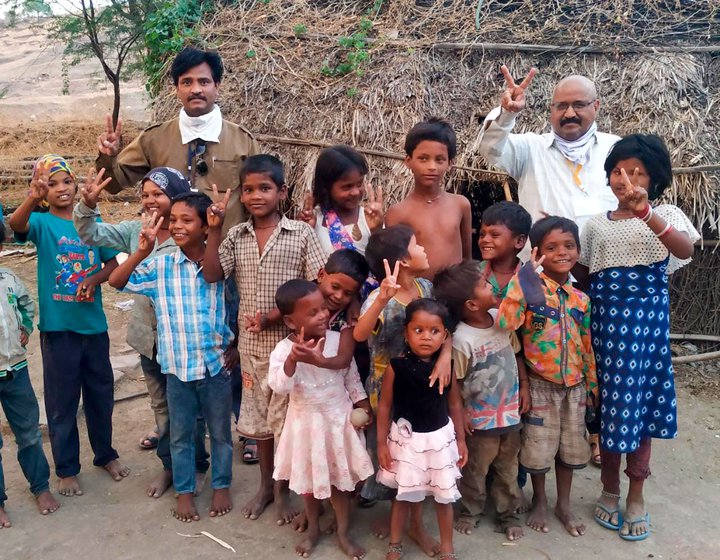 Left: A file photo of Tatwashil Kamble with a few homeless children. Right: Kamble and Ashok Tangde (right) at a Pardhi colony in Beed after distributing ration kits

Village rivalries play a part too, adds Tangde. “Sometimes, a person belonging to a rival group will reveal the information. At times, a boy who is in love with the girl being married will inform us.”

The tip-off is only the first step in preventing a wedding. The families involved try different means to get away, using political influence sometimes. “We have been intimidated and attacked,” says Kamble. “People have tried to bribe us. But we always alert the police. Some people quickly surrender. Others don’t go down without a fight.”

In October 2020, Kamble and Tangde learnt about the wedding of 16-year-old Smita a day before it was to take place. On that day, they reached the venue – about 50 kilometers from Beed city – before the rituals had begun. But her father, Vitthal, refused to stop. “He shouted, ‘She is my daughter, and I can do whatever I want with her,’” says Tangde. “It took him a while to understand the gravity of what was going on. We took him to the police station and filed a complaint against him.”

Smita was a bright student, her uncle Kishor says. “But her parents didn’t go to school so they never understood its importance. They were struggling to manage two meals a day because of the pandemic.” Vitthal and his wife, Pooja, both in their 30s, work in brick kilns, earning Rs. 20,000 together for four months of work. “Labour work had dried up. Getting Smita married meant two less meals to worry about every day,” explains Kishor.

A major challenge for Kamble and Tangde is to make sure that the family doesn’t try to arrange the wedding again. "The school teachers used to let us know if the girl involved in an attempted child marriage stopped coming to school, and we would follow up. But with schools shut, it has become difficult to track them.”

Vitthal has been asked to report to the police station every two months. “We couldn’t trust him,” says Tangde, because they worry he might try marrying his underage daughter off again. 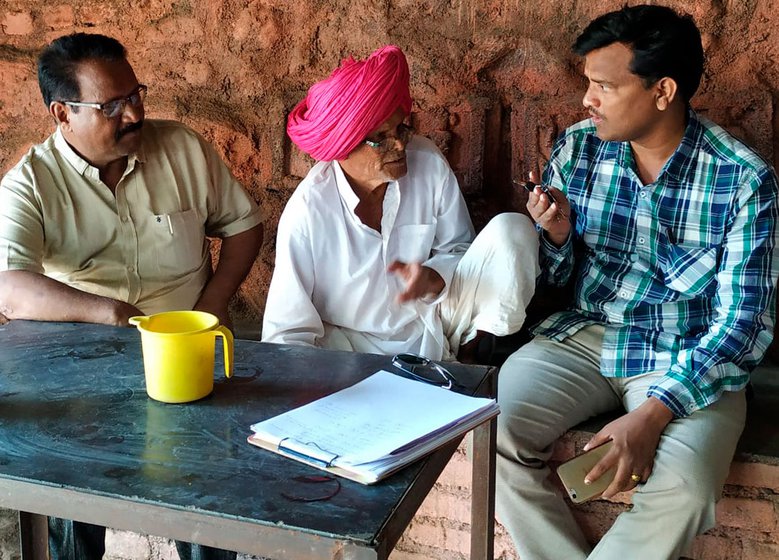 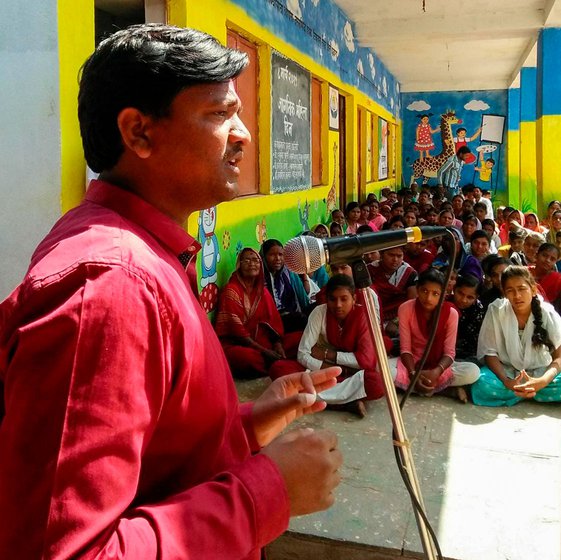 Smita went to stay with Kishor for three months after her wedding was stopped. She was unusually quiet during that time, her uncle says. “She didn’t speak much and kept to herself. She did her work, read newspapers and helped us in the house. She was never keen on getting married so early.”

Studies on women’s health have documented the adverse effects of early marriage, including the impact of child marriage on maternal mortality. A report by the National Commission for Protection of Child Rights, A Statistical Analysis of Child Marriage in India , based on Census 2011 data, notes that girls between the ages of 10 and 14 are five times more likely to die during pregnancy and childbirth than women in the 20-24 age group. And babies are born malnourished if their mothers were malnourished before or during the pregnancy.

In Rekha’s case, physical weakness, a sign of malnutrition, was the reason her in-laws gave to send her back to her parents. “In January 2021, two or three months after she went away with her husband, she returned home,” Bhagyashree says.

Chopping cane and carrying bundles weighing over 25 kilos on her head was difficult for Rekha, who is underweight. “She couldn’t do the backbreaking labour work. It affected her husband’s income,” says Bhagyashree. “So her in-laws ended the marriage and sent her back.”

Rekha spent some time at home upon her return. “But when a girl comes back home after a few months of getting married, people in the village ask questions. So she has been staying with an aunt most of the time,” says her mother.

As another season of sugarcane-cutting approaches and Bhagyashree and Amar get ready to migrate, Rekha’s future is being planned once again. The only difference is that Rekha is not resisting this time – she has agreed to get married again.

Names of the children and their relatives have been changed in the story to protect privacy.