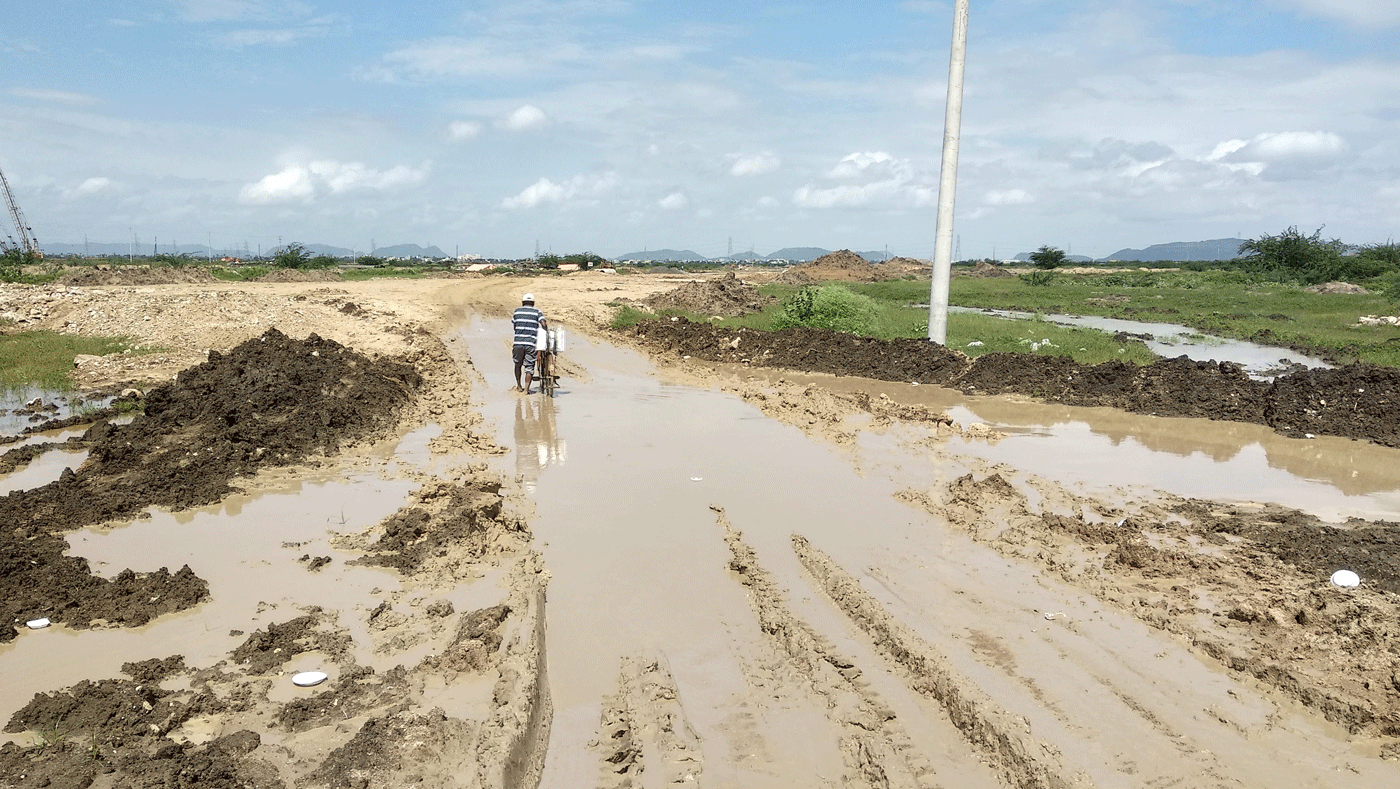 Valaparla Tirupathamma was relieved. She had been hired to clean the paint spilled on the floor at the newly-built SRM University in Neerukonda village of Guntur district. “We haven’t had much work for 3-4 years, so we were happy to be employed. But that happiness was short-lived,” she says. After two weeks, 29-year-old Valaparla was asked to leave, no reasons were given.

Ustala Mary Matha, 40, was fired too. “They paid us Rs. 250 a day for cleaning up the paint. When the work was over, we were asked to leave. They said that we are ‘old’ and not fit to work,” she says.

In May 2018, contractors had visited the Dalit colony in Neerukonda – a village of around 1,500 people – looking for workers. A group of 20 men and women were hired. “They come and take us whenever there is work. They send us away when the work is done, using some pretext,” says 60-year-old Kuraganti Vajram.  “Anyway there is no shortage of labourers since we are all jobless.”

A few others villagers continue to work with the university’s gardening and housekeeping departments, not knowing how long this work will last. The private SRM University – as well as several others – will be part of a ‘knowledge hub’, the Amaravati ‘Knowledge City’ in Andhra Pradesh’s new capital. It will include higher educational institutions, research and development departments of the corporate and public sectors, ‘skill development’ institutes and a ‘start-up hub’. Phase one of this cluster, spread over 75 acres, is scheduled to be ready by the year 2022, and phase two by 2037, says a document of the Andhra Pradesh Capital Region Development Authority (APCRDA). 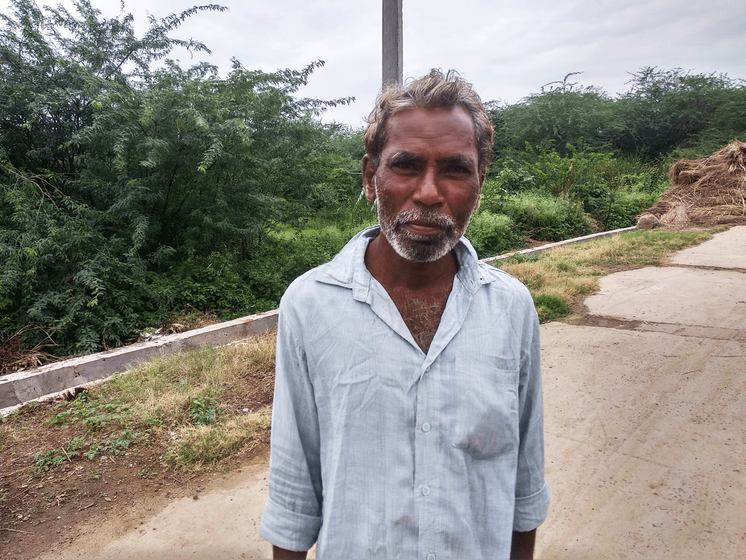 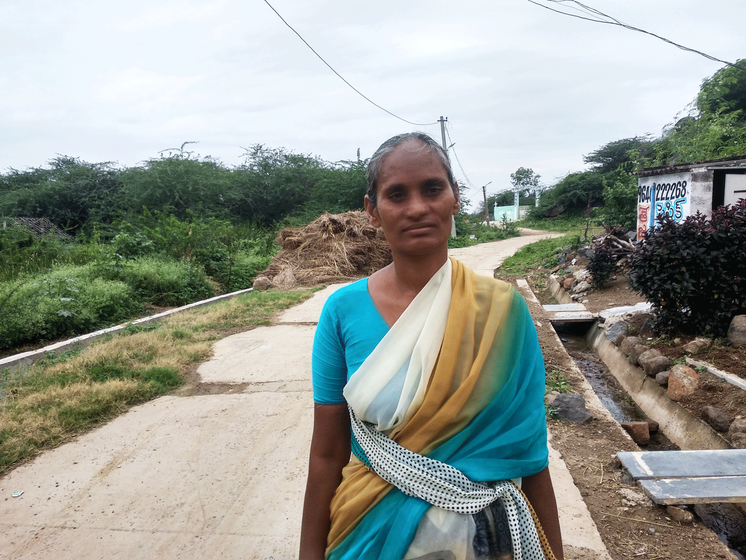 Ustala Ajarayya and Ustala Mary Matha: ' We used to work as labourers till the farmers gave away their lands for pooling'

Around this 'hub' though lies a wasteland of lost agricultural jobs. Almost all the labourers – those still working with the university and those who were fired – are landless Dalits, most of them from the Mala community. Since 2014, agricultural work in the region has dried up, after landowners started ‘voluntarily’ giving their plots under a Land Pooling Scheme (LPS) to the Andhra Pradesh government for Amaravati. Ustala Ajarayya, 52, Mary’s husband, says, “My wife and I used to work as labourers till the farmers gave away their lands for pooling. We haven’t had much work since then.”

Neerukonda is located in the fertile Krishna-Godavari delta, which spans four districts – East Godavari, West Godavari, Krishna and Guntur. The village is at the foot of a hill and adjacent to the Kondaveeti vagu (canal). The daily wages for agricultural labourers in the delta villages are among the highest in the state – Rs. 400-500 for men and Rs. 150-200 for women. “A family of two agricultural workers could earn between Rs. 12,000 to Rs. 15,000 a month,” says Mary.  The last time she and her husband made this much was in early 2015, not long after work on Amaravati began.

Under the LPS, only landowners – and not tenant farmers or agricultural labourers – who give up their land to the state for the new ‘greenfield’ capital are entitled to compensation. For agricultural workers deprived of a livelihood, the government has promised a pension of Rs. 2,500 per family per month for 10 years as part of the LPS. But this is much lower than the Rs. 8476 that a World Bank inspection panel report of September 2017 says has been the average monthly income of landless labourers here. And this meagre amount too was sanctioned in mid-2015 only after a series of protests by labourers in Vijayawada in Thullur mandal , around 12 kilometres from Neerukonda, at the branch office of the APCRDA. 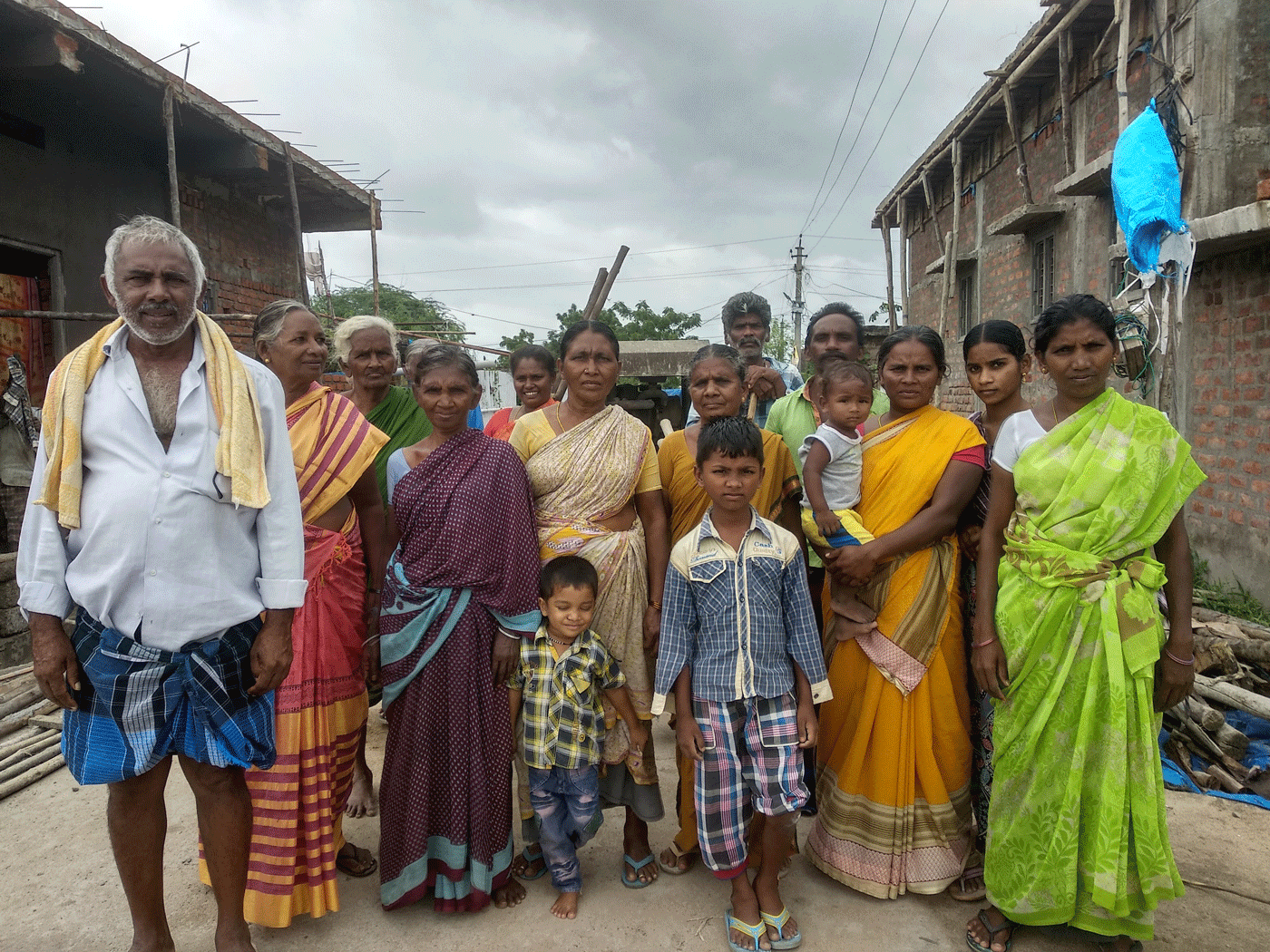 In Nelapadu village, landless Dalit women and the elderly can no longer find work, while the men in their families now go to far off places seeking low-paid jobs

“How will Rs. 2,500 be enough for a family of four?” asks Mary. “This little amount is also delayed and paid to us once in two or three months.” Her family is trying to cope by taking loans from upper caste farmers in the village.

Neerukonda is one of 29 villages where landowners are ‘pooling’ sland and giving it to the state government. The village is on the southern tip of Amaravati, and at its north boundary are other villages along the Krishna river. In phase one of the entire capital city project, the state will acquire 33,000 acres (and a total of 100,000 acres by phase three in 2050).

On the opposite bank of the river is Nelapadu, another of the 29 villages, “We used to have 5-6 days of farm labour [in a week],” says 40-year-old B. Mariyamma of Nelapadu. “You wouldn’t have found us here [at home] if not for the lack of work."

Around 100 landless Dalit families in Nelapadu depend on agricultural work. However, since 2014, when land started being ‘pooled’ they have had to travel to far-off places looking for work. Kommuri Chittamma, 35, an agricultural worker from the Mala Dalit community, says “We go to Vykuntapuram, Garapadu and Lingapuram villages, 30-40 kilometres away. And work there [of cutting the chilli crop] is available only from November to March. Even in these five months, we hardly get work for 50-70 days [earning Rs. 150-200 a day].” 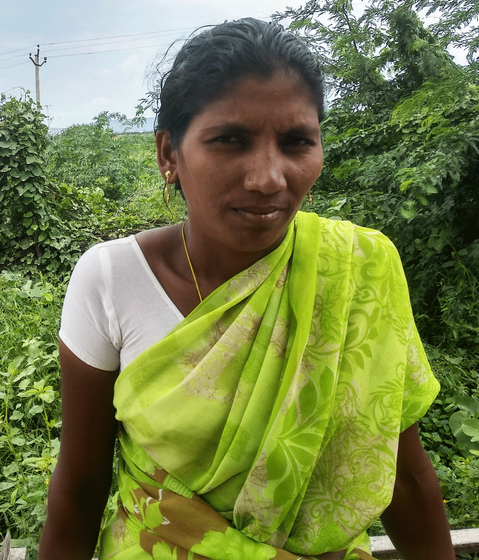 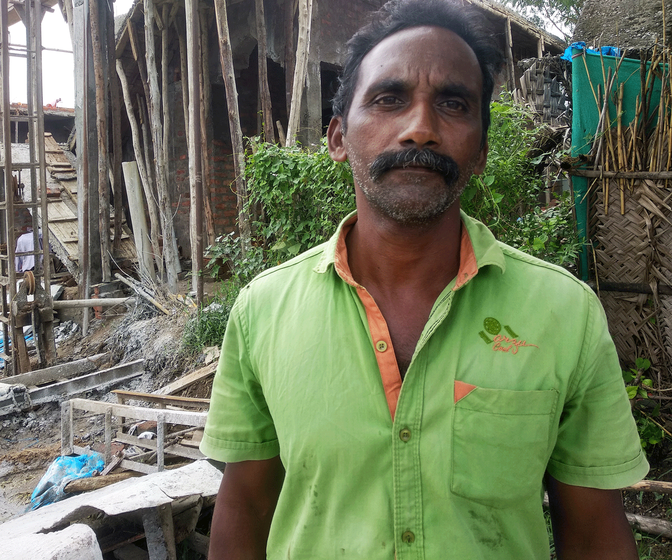 Mariyamma and Bakka Donesh: 'We eat whenever we get some work. Otherwise, we sleep hungry'

“We have to wake up early in the morning, at 5 a.m., cook food, pack lunch and then leave for work by 7 a.m. It is 8 p.m. by the time we return to our village,” says Kommuri Chittamma, 35. This journey and schedule, she adds, is exhausting.

“We demand at least Rs. 10,000 per month for all the landless families [as pension],” says Koyyagura Nirmala, 50, who participated in some of the protests in Thullur.  “What use will Rs. 2,500 be when a one-time visit to the private hospital in Tulluru costs Rs. 500?”

The government has also promised the labourers 365 days of MGNREGA work, but the villagers complain that they haven’t got a single day of work under the scheme since 2014. However, boards in Nelapadu say in Telugu that cement roads have been built here using MGNREGA funds. “None of us got any work under MGNREGA,” says Nirmala, after I read this out to her. “I don’t know how and when these boards came up.”

However, when I contacted the revenue officer of Thullur mandal , A. Sudhir Babu, he said, “The villagers of Nelapadu were given the work under MGNREGA as per the rules of APCRDA in 2017 when the roads were constructed.”

Nelapadu is one of the three or four villages in the capital region where the construction of new buildings has begun. Big companies such as Larsen & Toubro and Shapoorji Pallonji are building a ‘Justice City’ (a high court campus), MLA quarters, and an IAS officers’ colony, among several other complexes. 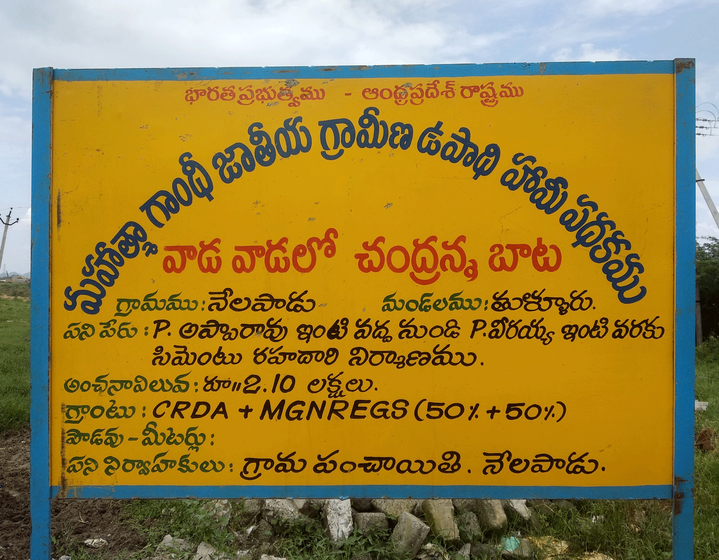 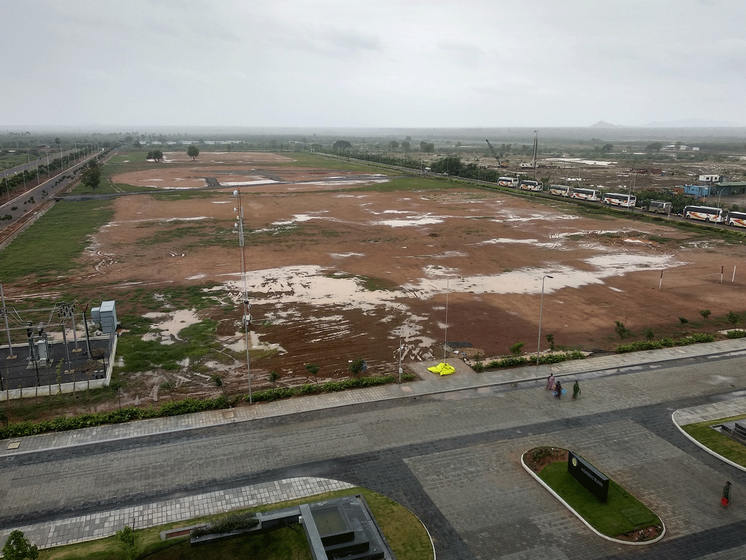 Left: A board in Nelapadu announcing the MGNREGA work done in the village, though people here say they haven’t got any work under the scheme since 2014. Right: The sports ground of the SRM University, not far from Neerukonda; the university will be part of a 'knowledge hub' in Amaravati

“All the construction workers are from West Bengal, Bihar and Jharkhand,” says Bakka Donesh, 48, Mariyamma’s husband. “None of the labourers are from Andhra Pradesh, forget this village. The companies employ them because they work for lower wages.”

Donesh once went to a construction site looking for a job as a guard. “They asked me to catch a snake. When I killed the snake, they told me that I have to catch it alive. I told them that they will not find such a watchman anywhere in the district and came back.” Donesh now goes to Thullur whenever he can find work on construction sites there.

How are the Dalit families of Nelapadu managing with little work and barely any support from the government? Mariyamma laughs. “We eat whenever we get some work. Otherwise, we sleep hungry.”

Back in Neerukonda, around 20 families from drought-hit villages in Guntur and Prakasam districts are camped on the outskirts, in tarpaulin tents. They too work at the university. “The [gardening] contractor brought us and we’ve been here for over a year [since October 2017]. We don’t have any idea when the contract will end,” says Ramadevi, 40, who earns Rs. 250 per day. 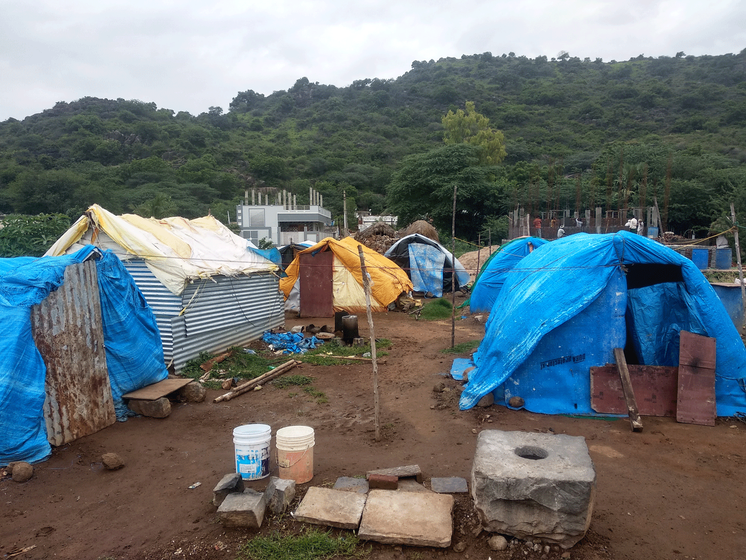 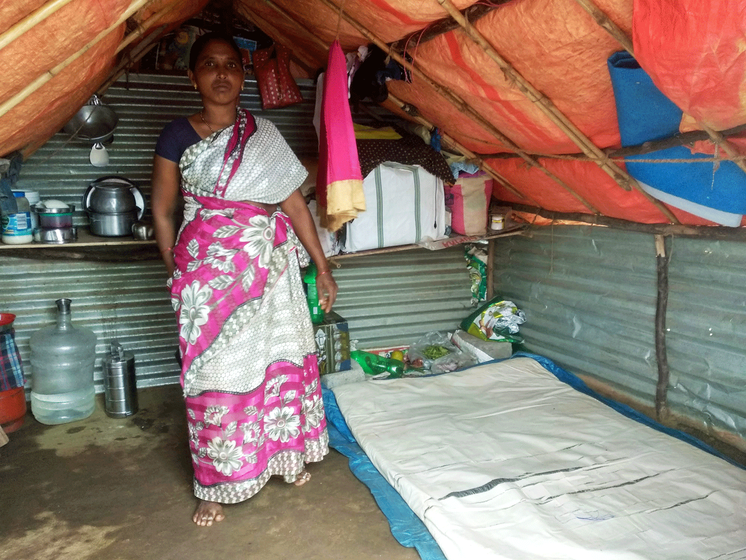 On the outskirts of Neerukonda, families from drought hit villages of Prakasam and Guntur districts have been staying in makeshift tents. “The contractor brought us... We don’t have any idea when the contract will end', says Ramadevi

Gorlamma, 35, from Markapur village in Prakasam district, says, “There is no agricultural work in our villages due to a lack of water. So we left our homes and came here.” Gorlamma has left her kids with their grandparents in the village. “I want to go back, but there is no work in our village,” she says.

The Amaravati capital city plan also envisages a huge statue and memorial of N.T. Rama Rao, former chief minister of Andhra Pradesh and founder of the Telugu Desam Party, atop the hill above Neerukonda. It will displace the villagers, but the government has not yet notified them. Mary, who lives on the hill with other Dalit families, is afraid she will lose her house because her family does not have a title deed. “We want house titles so that even if the government removes us, we will at least get some compensation,” she says.

The compensation, the people of Neerukonda hope, will give them at least a house somewhere else when they are forced to leave behind the village they have lived in for long – making way for a big city that, they feel, has no place for small people like them.