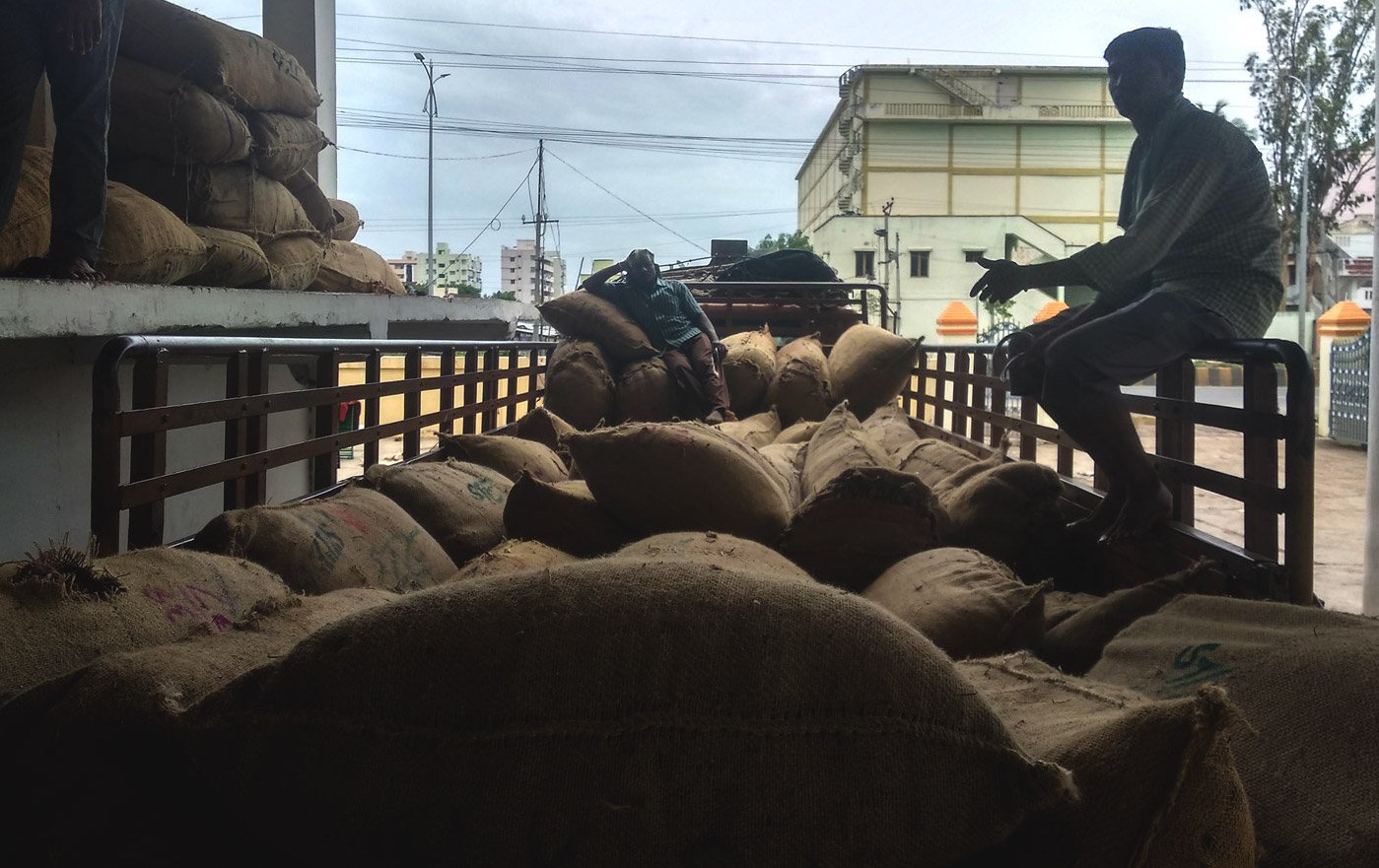 Labourers in Guntur's cold storage units carry heavy loads of chillis up and down several floors every day, for a few rupees per sack. Asking for better wages or benefits usually means either censure or loss of work

Every morning, Pentapalli Raja Rao slowly walks down six floors of stairs carrying a sack of red chillis on his back or head. The sack weighs around 45 kilos, and he makes several such trips over the next few hours. “Coming down is easy compared to climbing up 130 steps,” says 29-year-old Raja Rao, who has been doing the back-breaking work since he was 19.

Once the sacks full of mirchis are on the ground floor of Viswa Cold Storage, Rao and 11 other workers shift them to the truck waiting in the compound. When the truck is fully loaded, it leaves for the NTR Agricultural Market Committee Yard in Guntur town, around seven kilometres away.

“They pay 15 rupees for taking the sack from the lorry to the cold storage, and 10 rupees when it's brought back down,and loaded into the lorry,” says Raja Rao, who is from Korni village of Gara mandal in Srikakulam district. “But we only get 23 rupees per sack. The mestri (supervisor) takes two rupees as commission.” That’s a rupee for every sack carried up, a rupee for every sack brought down.

During peak mirchi sales season from February to May – Viswa Cold Storage only keeps chillis – Raja Rao earns around Rs. 300 a day; for the rest of the year, his wage can fall to Rs. 100 a day or even less. 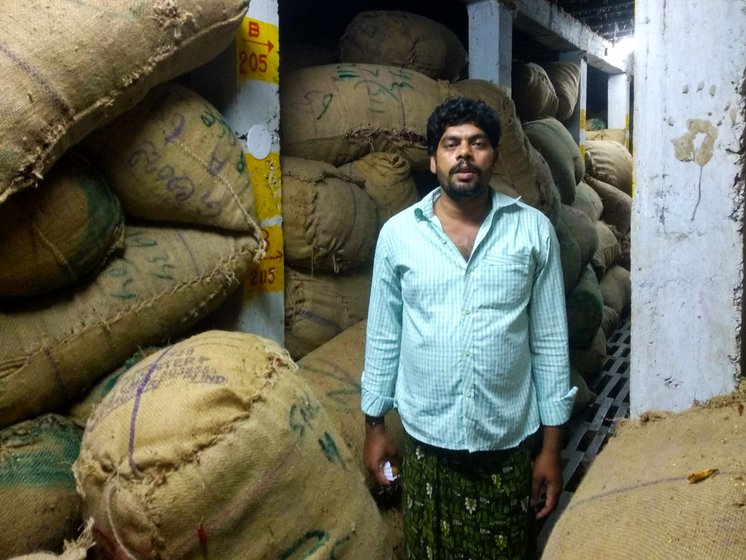 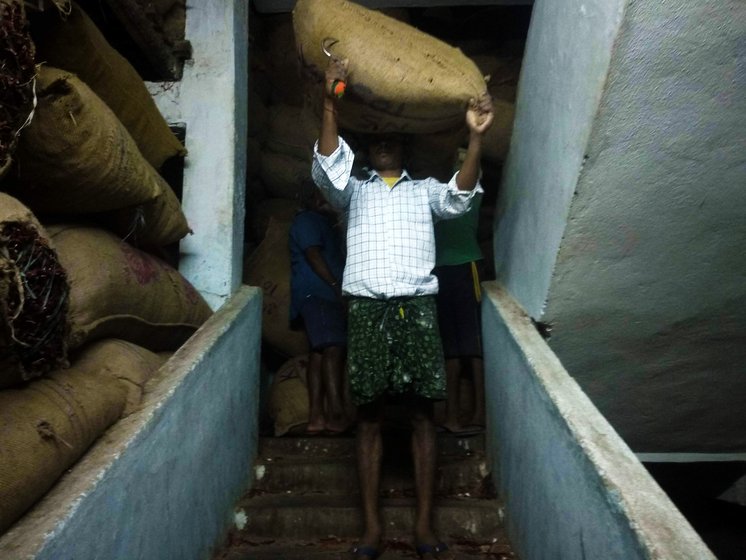 'They pay 15 rupees for taking the sack from the lorry to the cold storage, and 10 rupees to bring it down, back to the lorry' , says Raja Rao

The lot that Raja Rao and his co-workers were shifting recently belonged to Garla Venkateswara Rao, a farmer from Oddupalem village in Prakasam district. “The mirchi rate has been very low for two years (2016-17 and 2017-18), so I have stored 40 quintals in AC [cold storage] since March 2017,” he says. “ I was hoping that prices will increase and I can sell later. I have waited for more than 15 months, but the prices have remained almost the same.”  In July 2018, Venkateswara Rao was forced to sell the produce at Rs. 4,500 a quintal so that he could invest in the 2018-19 agricultural season for mirchi , which runs from around October to February, while the sales in the market yard go on till May (See Waiting for fair prices in Guntur )

Guntur is known for its mirchi production and chilli is among the major cash crops stored in the district’s 125-175 cold storage units because it is vulnerable to price variations. There were 290 such units in Andhra Pradesh in 2010 says a study published in 2016. The first of these came up in the early 1990s, recall storage owners, workers and trade union activists. The cold storage helps farmers maintain the quality without spoilage. Other commodities stored in some of these units include turmeric, vegetables, fruits and ornamental flowers. 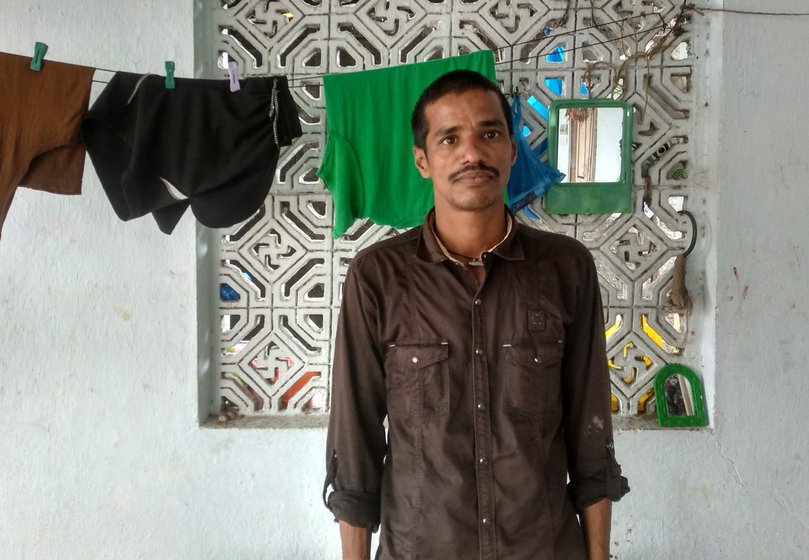 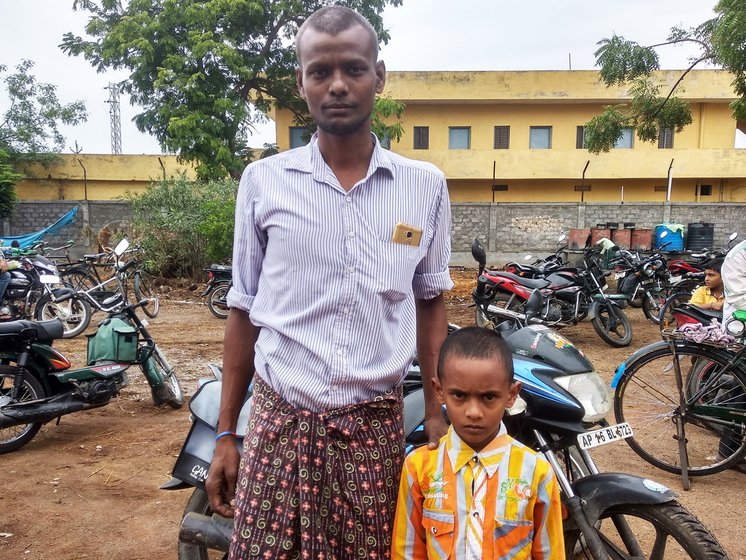 Chamalla Sampath Rao (left) says, 'Today each of us earned a little over 100 rupees', while Karimi Chinnam Naidu (right, with his son Aakash), stopped working as a cold storage loader last year in protest

Some of the units have direct trading links with commission agents in the mirchi yard, others function without such links. The agent takes a cut from the farmers for brokering the sale in the market, purchases the produce from them at a lower rate, then negotiates a higher price for it in the market yard – and keeps the extra amount.  “A lower price by the commission agent is a win-win game for both the agent and the cold storage,” says Venkateswara Rao. The farmers take their produce to the cold storages hoping for the prices to increase. Many of the commission agents in Guntur, over time, have become cold storage owners.

The owners of the units are largely from the dominant Kamma, Reddy and other communities, while the loaders are mostly from backwards castes from the Uttarandhra region. Around 2,500 workers,  estimates  the Cold Storage Workers and Employees Union, affiliated to the Centre for Indian Trade Unions (CITU), are employed in the storage units in the peak mirchi sales season between February and May. Depending on the storage capacity, each unit hires 12 to 25 workers on a per-sack rate.

“While 95 per cent of the workers in the cold storage units are from Srikakulam and Vijayanagaram districts, some have started to come from Odisha over the last few years,” says Chinthada Vishnu, 50, secretary of the union and the mestri at Viswa Cold Storage. “Some of the workers go back during the low season from June to December for agricultural work in their villages. We call them whenever necessary.” 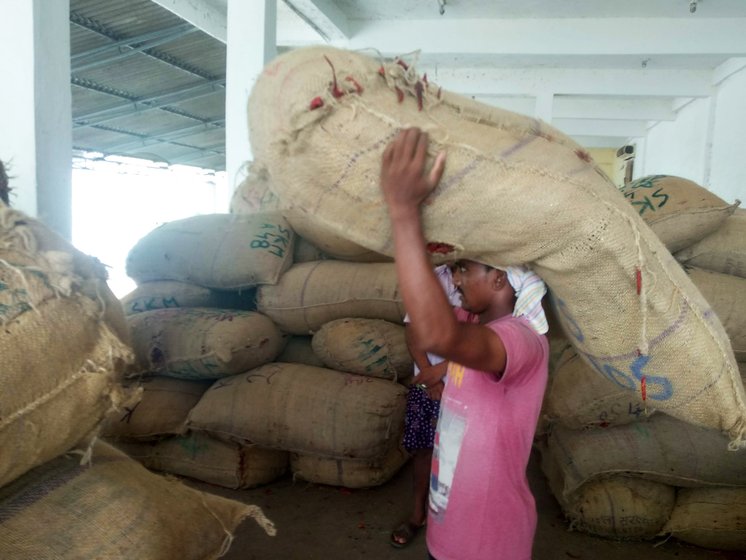 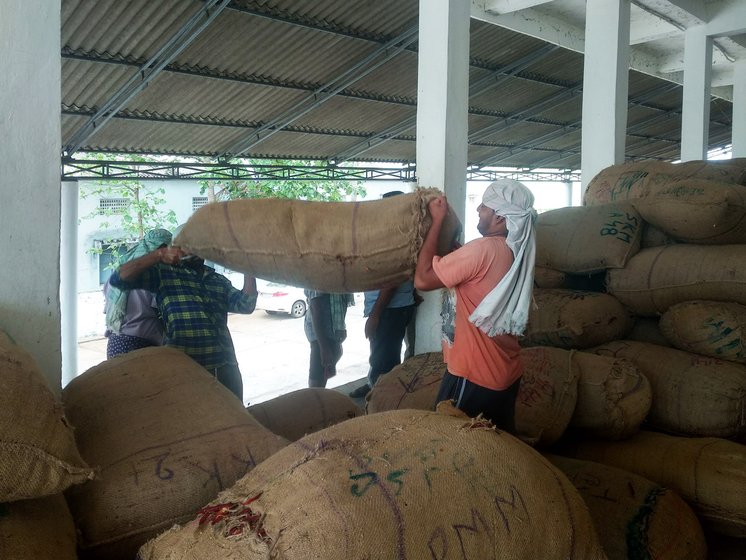 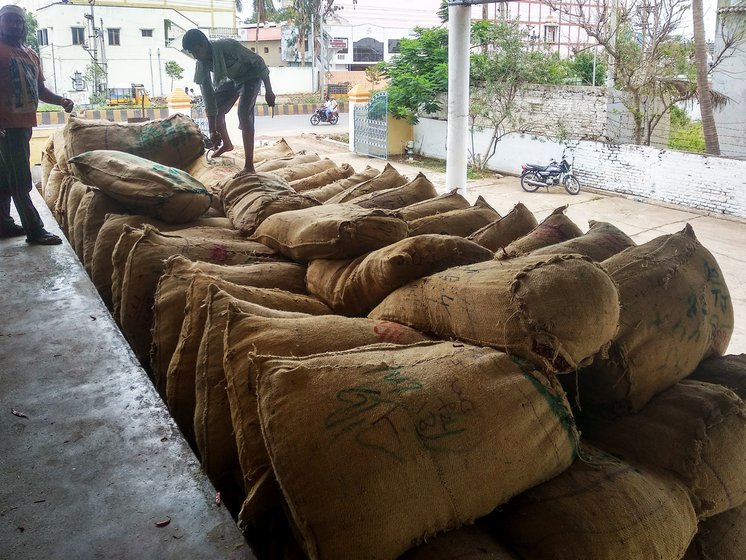 Around 2,500 workers are employed in the cold storage units of Guntur in the peak mirchi sales season between February and May

Vishnu belongs to the backward Kalinga community and doesn’t own any land. “Failed agriculture brought me here [from Srikakulam] in 1999. I took land on lease and cultivated paddy for three years and ended up in losses due to a lack of irrigation facilities as well as a lack of good market prices for the produce,” says Vishnu.

The cold storage loaders work for five days a week, and get two days off during the February to May market season. Their work timings are not fixed and depend on the demand for chillis. “We have to work at odd hours, because that’s when loads come. We even wake up at 3 a.m. and work till night. We take short naps whenever we get time in the day,” says Raja Rao.

Most of the unmarried workers (all the loaders are men) stay in the compound of the cold storage in a couple of rooms, where they cook basic meals of rice and curry. The  married ones usually rent rooms nearby.

“All of 11 of us together carried down just 150 sacks today. We share the money dividing it by the number of people who work. Today, each of us earned a little over 100 rupees,” says Chamalla Sampath Rao, who came to Guntur looking for work a decade ago from  Korni village of Gara mandal in Srikakulam district. 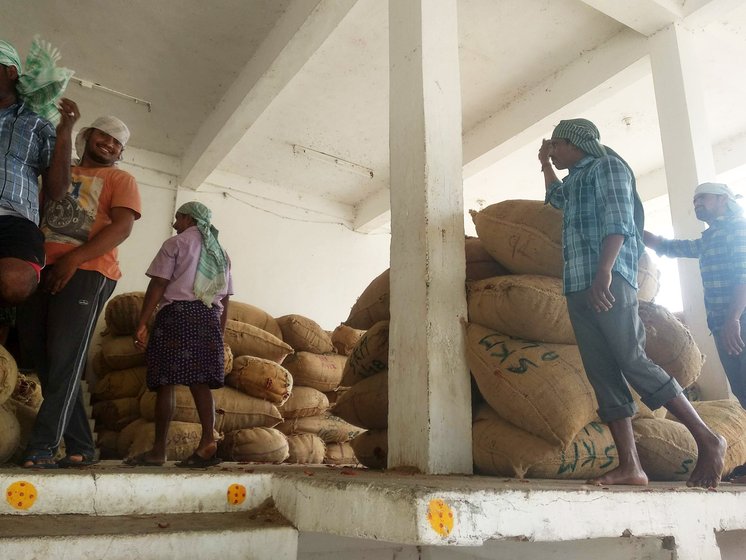 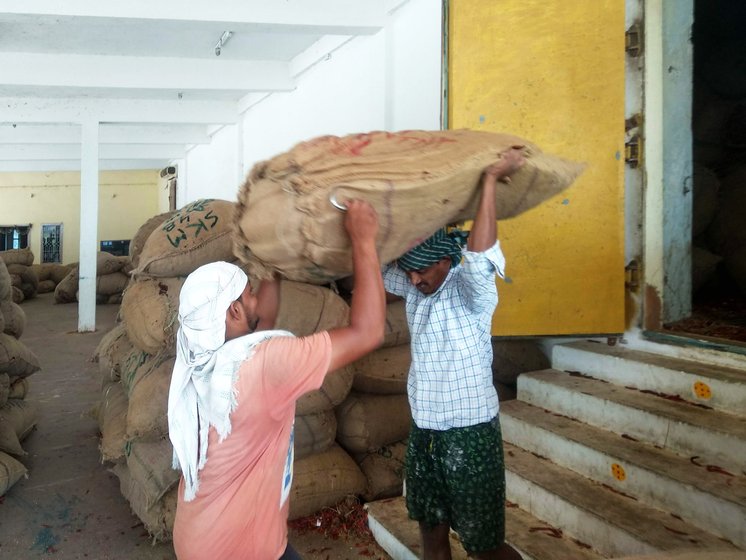 'We do all the hard work', says Sampath Rao, of carrying 45-50 kilo sacks up and down several floors every day

He makes sure that his mestri Vishnu isn’t around and tells me, “We do all the hard work. No mestri ever does any work. All they do is command and instruct us. Even then, he takes a commission of one rupee every time a bag is carried on our shoulders. In addition, he also gets what each of us gets [the sack-carrying wage], without ever placing his hand on the sack.”

Viswa Cold Storage can stock 1.2 lakh sacks at a time, which means the mestri gets Rs. 2.4 lakh every year, plus the sack-carrying wage. The workers know that questioning the mestri would mean messing with their livelihood. “He will send us away and get someone else. So, we just stay silent,” adds Raja Rao.

Karimi Chinnam Naidu, 35, stopped working as a cold storage loader last year after 13 years. “I protested against the two rupees commission and confronted the mestri . He then made it tough for me to survive. I had to leave and find work elsewhere,” says Naidu, who  now works as a porter in the mirchi market yard.

When I ask Vishnu about the commission, he says, “Sometimes, we pay money to the workers in advance and they ditch us. This money is used to cover those losses. The workers should probably ask the owners of the cold storage to increase their wage.”

Asking the owners to increase the wage has not helped. “When I first started working 10 years ago, the wage was 12 rupees per sack. Now, we get 23 rupees per sack, not even double. During the same time, the cooling charges have increased from 50 rupees to 200 rupees per sack [including the labour costs],” says Sampath Rao. This amount is paid by the farmers who store their produce at these units. 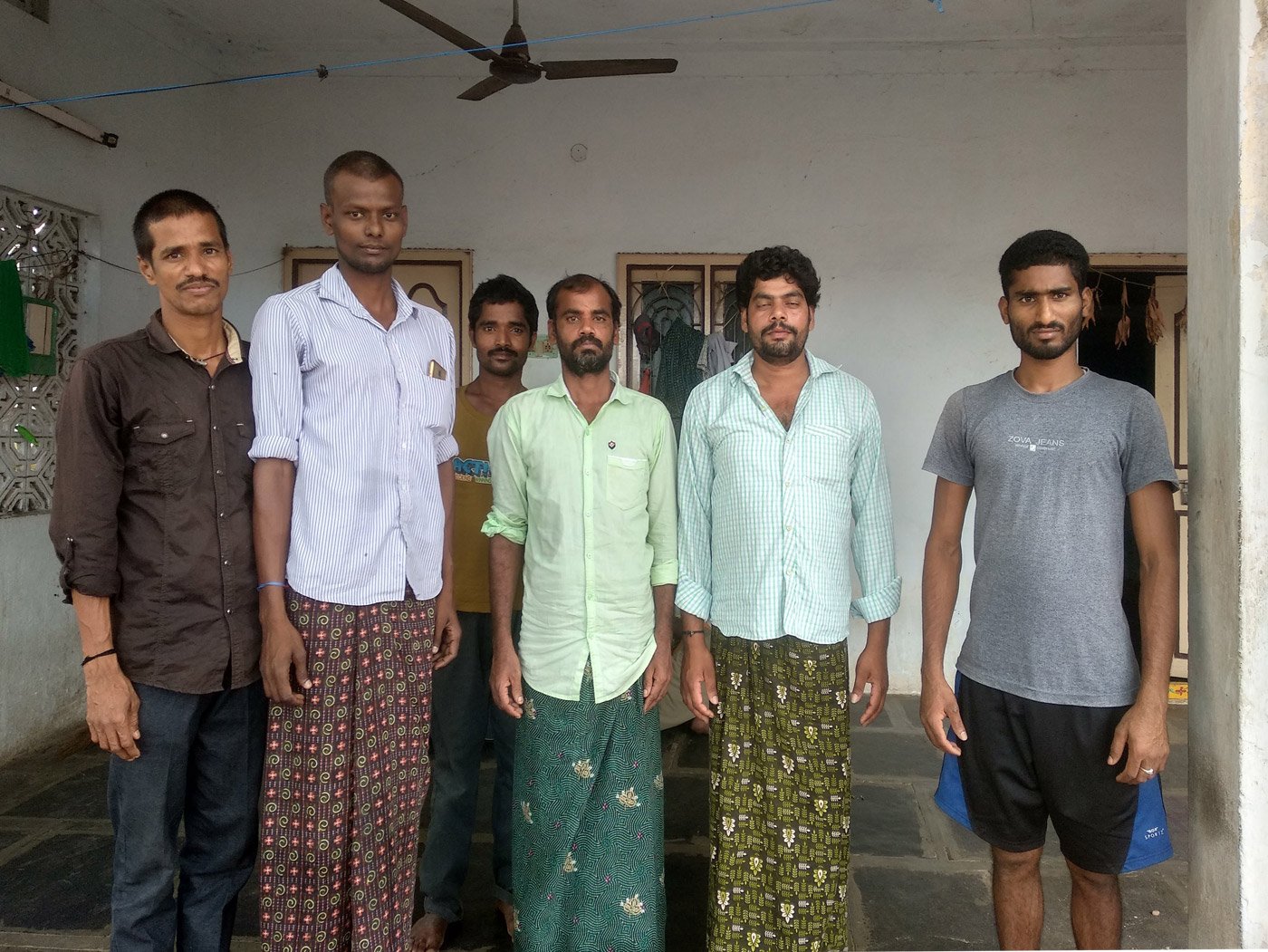 The owners of the cold storage clearly make a robust profit. The running costs of the units are not high. Srinivasa Rao, the owner of Viswa Cold Storage, says, “The  important costs are electricity for the ACs, diesel for the generator during power cuts, ammonia [used for the refrigeration] and water, apart from maintenance costs. Electricity costs are around Rs. 2.8 to 3 lakhs per month and water costs  around Rs. 25,000  per month.”

“Even if we assume the running costs to be around Rs. 5 lakhs per month, the cold storage business is hugely profitable, fetching profit upwards of 50 lakhs every year,” says Nalinikanth Kotapati, Guntur city secretary of CITU.

The workers are not on the pay-roll of the cold storage and don’t have the protections mandated by labour laws – no medical cover, provident fund, coverage under the Employees State Insurance scheme, bonus, or any other benefits. “The cold storage people say that the workers are brought by the farmers to load and unload, thereby absolving themselves of any responsibility,” says Nalinikanth.

The workers have been trying to ask for more through the union, but the union itself is not very strong. The informal nature of the work makes it difficult for the loaders to organise and they fear losing their work entirely if they question the owners and mestris .

“We come here only if we can’t live [find livelihoods] in our village,” says Raja Rao. “Who would want to live like slaves leaving our loved ones behind? But we can’t even talk about our slavery.”