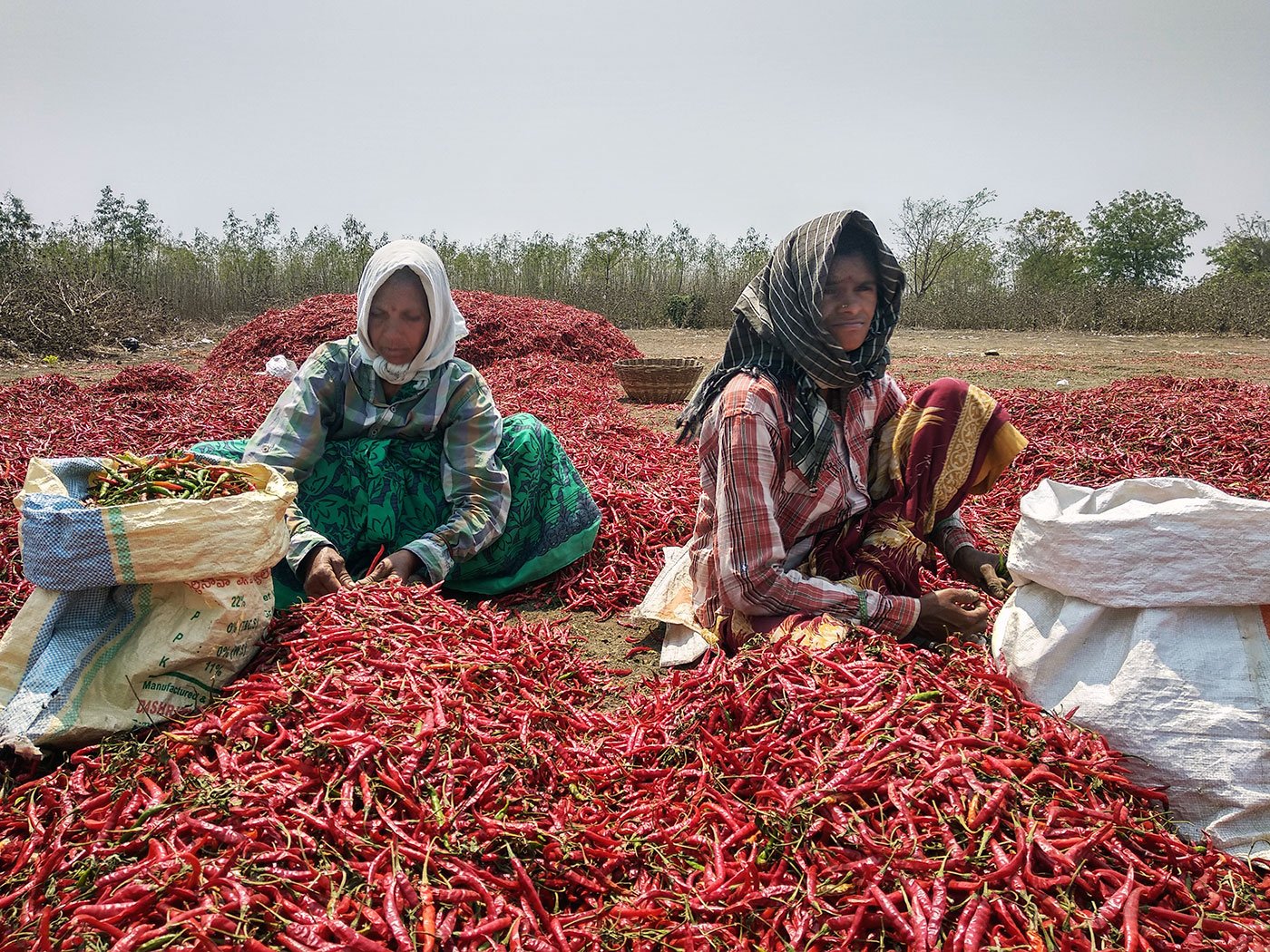 Waiting for fair prices in Guntur

After investing lakhs, often on loan, mirchi farmers in Andhra encounter cartels of agents at the market yard, who dictate low, loss-inducing prices – and the state’s plans to digitise sales haven’t helped either

On a hot summer day in May this year, Gottam Hanimi Reddy travelled 105 kilometres in a truck from Tripurapuram village in Nuzendla mandal to Guntur, hoping to sell the eight quintals of mirchi he had cultivated on his five-acre farm. This was the last harvest; he had come to the market thrice in April, when he sold the chillis at prices ranging from Rs. 6,000 to Rs. 8,000 per quintal, depending on the variety – Mirchi LCA334 or Guntur Sannam.

Now he was at the NTR Agricultural Market Committee Yard in Andhra Pradesh’s Guntur town again, waiting for three days, hoping to sell off the load if the prices increased. Sitting outside the farmers’ mess at the mandi (market) on a day when mirchi sales for the 2017-18 agricultural season were closing, he said, “Today, the prices have fallen further and the commission agents are only giving 4,200 rupees per quintal. All of them form a cartel and decide the price at their whims and fancies.”

Pushed to a corner, Reddy had to decide if he should take the load back home and keep it in cold storage or sell it at the low price. “I can’t afford the AC [air conditioning] costs and moreover, a quintal – two tikkis [bags] of 50 kilos each – costs 1,000 rupees for transport one way,” explained Reddy, about his choice to sell at the poor price. He paused, then said in a low voice, “The links of the brokers with the AC people [cold storage suppliers] is well known. It’s a win-win for both.”

Reddy had spent around Rs. 2 lakhs per acre as investment on seeds, fertilisers, pesticides and labourers’ wages – and there was his and his wife’s labour too. This had yielded 20 quintals per acre in the 2017-18 mirchi season from October to March. Around 100 quintals in total, at a cost of roughly Rs. 10 lakhs. In previous years, this was somewhat profitable – with prices at a high of Rs. 12,000-15,000 per quintal in 2015-16 (reportedly due to increased demand in the international market), and at least Rs. 10,000 in some other years, allowing cultivators to break even. 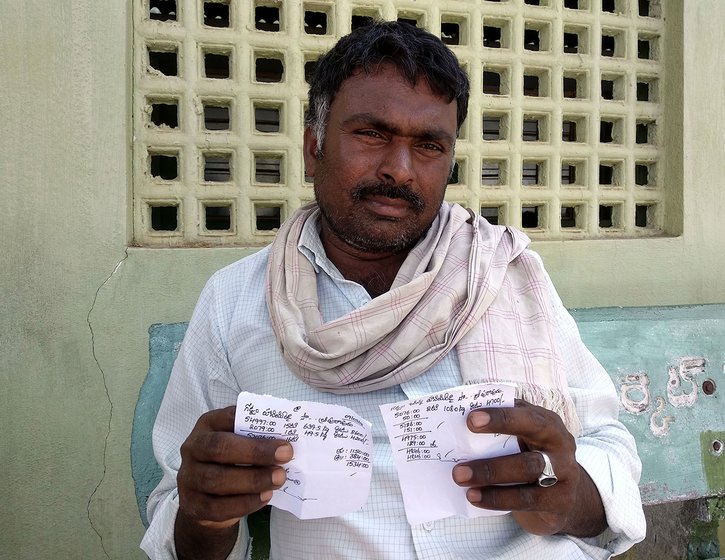 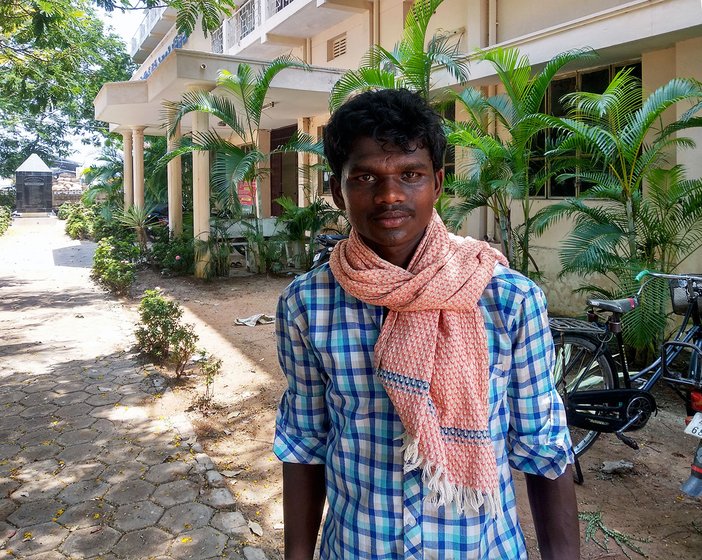 Gottam Hanimi Reddy (left) was forced to sell his chillis at a low price, while Mohammad Khasim (right) burned a part of his crop in desperate protest

In the 2016-2017 agricultural season, there was a flood of mirchi in the market. Many farmers had cultivated the crop, hoping for prices as high as what was on offer in 2015-16. Besides, when the cotton crop was attacked by the pink bollworm, those farmers too switched to mirchi, hoping to do better. But then prices fell to an all-time low of Rs. 1,500-3000 per quintal. Over 10 mirchi farmer suicides were reported in local newspapers across Andhra Pradesh (See Mirchi is not so hot anymore in Penugolanu ).

“While input costs have increased from 30,000 rupees to 2 lakh rupees per acre during the last 10 years, the prices have remained the same,” says Nagaboina Rangarao, a Vijayawada-based activist with the All India Kisan Sabha (AIKS). Low prices have forced farmers to try to cultivate other crops. From 4.65 lakh acres of mirchi cultivation across Andhra Pradesh in  2016-17 with a total produce of 93 lakh tonnes, in 2017-18 mirchi was cultivated only on 2.5 lakh acres (according to data given by the secretary of the Guntur market yard),  and the produce by the end of the season was just 50 lakh tonnes.

“The brokers and the officials claimed that the high supply and low demand was the reason for low prices last year. But, this year, despite the low supply and high demand, the prices have not increased much,” says 24-year-old Mohammad Khasim from Tripuranthakam village of  Prakasam district, who burnt a part of his produce in March 2017 in front of the Guntur yard, as a mark of protest. 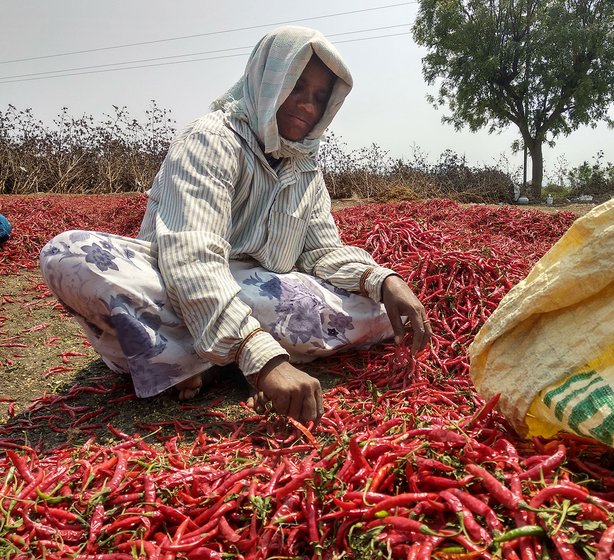 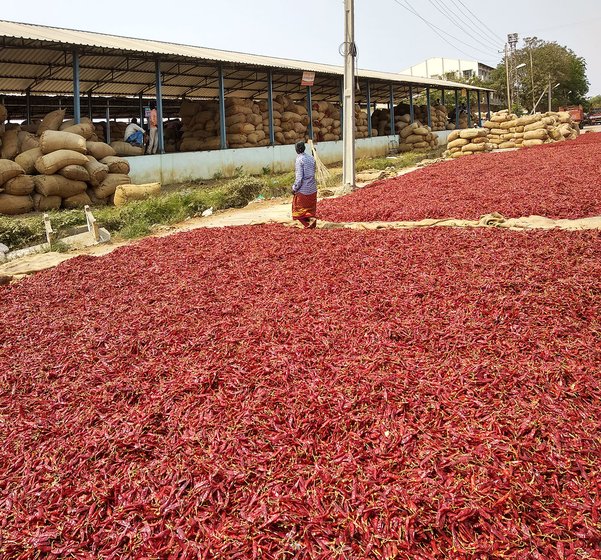 Agricultural labourers like Januboina Ankalamma are also hit by the low prices. Right: At the Guntur yard, a lush mirchi crop does not mean a good rate

And when farmers cultivate amid losses, the agricultural labourers they hire can suffer even more. Mirchi is a labour-intensive crop and requires three to four rounds of labour – the first when seeds are sown, the next to remove weeds, followed by cutting the crop and separating the mirchi based on variety. “The first two tasks are usually done by women. Men do the cutting – and these costs alone are around 1.5 lakhs per acre – 300 labourers work for two days to pluck mirchi from an acre of crop,” says Alturi Rami Reddy, who owns two acres in Meduru village of Gampalagudem mandal in Krishna district.

Januboina Ankalamma, who comes to work on Rami Reddy’s farm from Ganugapadu village in the adjacent Tiruvuru mandal , travelling 15 kilometres in a tractor, says, “When we ask the farmers to increase the wage [and also make it equal, instead of Rs. 250 for men and Rs. 150 for women], they rue that they are already paying us more than we deserve. They tell us that they are in losses themselves because of the lack of a good price for mirchi . If the government makes sure that the farmer gets fair and profitable prices for the produce, it is likely that the farmer will increase our wages too.”

The Guntur yard is the largest in Asia, where more than 400 commission agents operate as brokers between farmers and buyers or exporters. They get a commission of Rs. 3 to Rs. 5 for every Rs. 100 paid to the farmer, which is deducted from the final amount the farmer receives. “Over half of them don’t even have licenses but operate because they have links with politicians. The nexus between the officials, brokers and the politicians keep the rates low and farmers lose lakhs of rupees every day,” says Nagaboina Rangarao of the AIKS, which has led agitations against the cartel system and low prices.

On February 1, 2018, the mirchi yard in Guntur went digital with eNAM (electronic National Agriculture Markets), with which buyers can buy from anywhere in the country. The Guntur yard is one of 585 Agricultural Produce Market Committee (APMC) markets in the country that is trying this out as a pilot project. The project started on April 16, 2016, and is aimed to be an all-India electronic trading portal which links the APMC mandis to create a unified online national market for agricultural commodities. This, the government claims, if implemented properly, could break the local cartels and increase competition among buyers, thereby giving fair prices to the farmers. 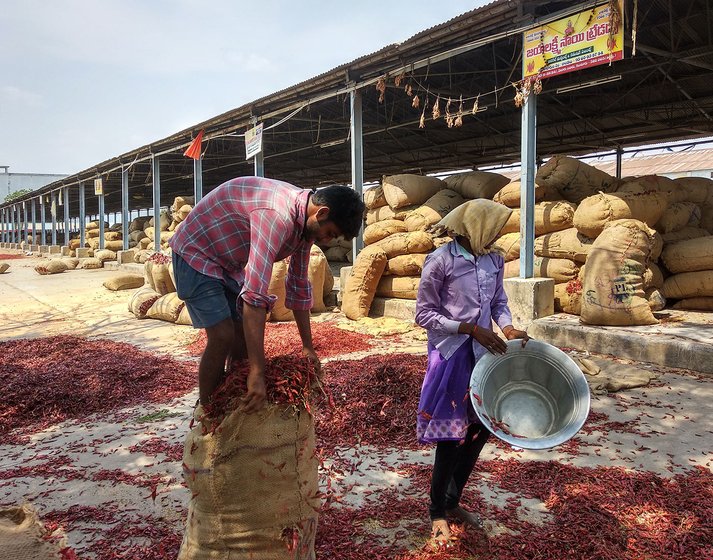 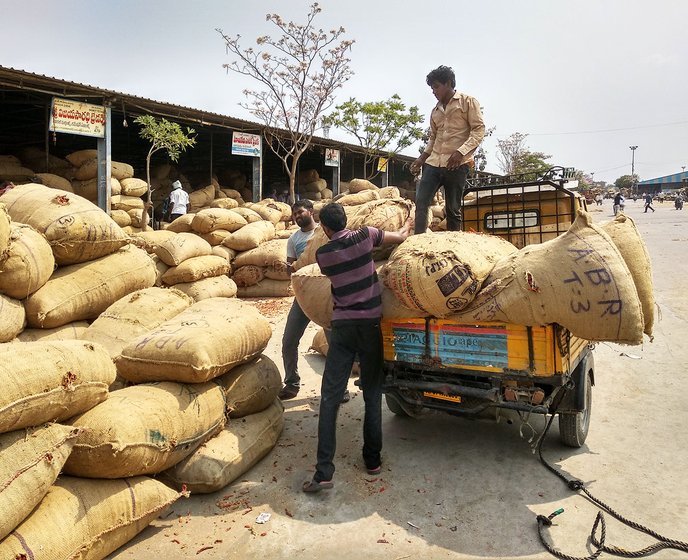 Workers stuff the dried chillis into jute sacks, which are then taken in tempos and trucks to be sold to buyers and exporters at the market

The brokers at Guntur have opposed the digitisation and refused to buy any produce bought by farmers to the yard. In turn, in March this year, the farmers protested the brokers’ refusal to buy. “We can’t take our load back. So we blocked the Chilakaluripet road [adjacent to the yard] and forced the administration to put eNAM on hold for some time,” says Khasim.

In April, eNAM restarted at Guntur. Venkateswara Reddy, secretary of the market yard, says, “It is back, but we haven’t been able to interlink this market with the rest of the markets in the country.” So the digitisation has not increased the price of mirchi . “eNAM is useful if the markets are linked. Otherwise, the local agents who form a cartel offline will now form a cartel online,” says Sarampally Malla Reddy, Hyderabad-based all-India vice president of the AIKS. “Moreover, eNAM is another step in corporatisation of agriculture and opening up the agricultural sector to big corporates.” In other words, a solution to end agent-controlled cartels could shift the exploitation axis to big companies.

“What the government should instead do is to announce a minimum support price (MSP) which has been a demand of the farmers for some time,” says Malla Reddy. “It should also involve the Andhra Pradesh State Cooperative Marketing Federation Ltd and the National Agricultural Cooperative Marketing Federation of India Ltd in the marketing process – these were systematically dismantled after the 1991 liberalisation – rather than force technology and digital processes on farmers, especially where there is a lack of infrastructure to implement eNAM.” In the past, the federations procured produce from farmers and were a buffer, minimising the role of commission agents.

With or without the promises or pitfalls of digitisation, farmers like Hanimi Reddy are waiting for the day when they need not wait for days together at the market yard to sell their produce at a fair price – and return home dejected.