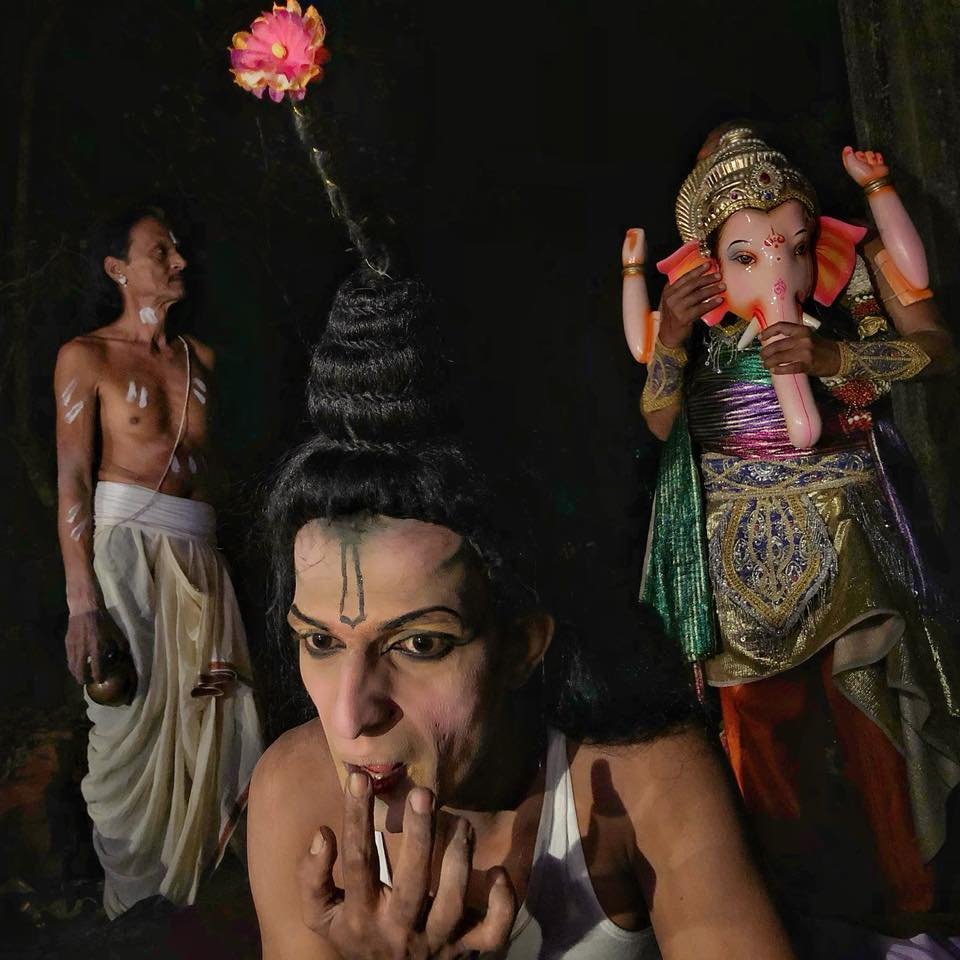 A rich night of Dashavatar improvisations

In Dashavatar performances – a centuries-old theatre form of south Maharashtra and north Goa – plays of several hours, with only male actors, most of them farmers and labourers, keep audiences riveted till dawn

“In conservative society, it’s very difficult to live as a [male] actor who performs female characters,” says Omprakash Chavan, 52, who has played women’s roles in more than 8,000 Dashavatar plays for over 35 years.

Dashavatar is a religious folk theatre form of southern Maharashtra and northern Goa that’s at least 500 years old. It’s based on mythological tales about Lord Vishnu’s 10 avatars – Matsya (the fish), Kurma (the tortoise), Varaha (the boar), Narasimha (the lion-man), Vamana (the dwarf), Parashurama, Rama, Krishna (or Balarama), Buddha and Kalki. The plays are almost entirely improvised, several hours long and usually performed by seasonal farmers and labourers. Traditionally, they have been performed inside temples – and only by men.

In October every year, soon after the paddy harvest, Dashavatar theatre companies begin touring Sindhudurg district in Maharashtra and parts of north Goa. Temples offer them contracts to perform at an annual jatra (fair) for the village deity, where the audience is mainly local residents and migrants working in Mumbai. The companies consist of about 15 members – 8-10 actors, three musicians and two cooks – and they perform approximately 200 plays per season (from October to May).

Sometimes, the companies are also invited to put on shows at people’s homes, where the characters are mythological but the stories are fictional. While the temple performances are in Sanskritised Marathi, the enactments at people’s homes are in the local Malvani.

From 2014, I have photographed the Yakshini Dashavatar Company and the Parcekar Company as they toured several villages. Their performances started at midnight and went on till sunrise. Entire families would come to see the plays and even young children stayed up to watch them. All riveted by the actors performing amidst the audience, their improvisations, and the popular ‘moral of the story’. 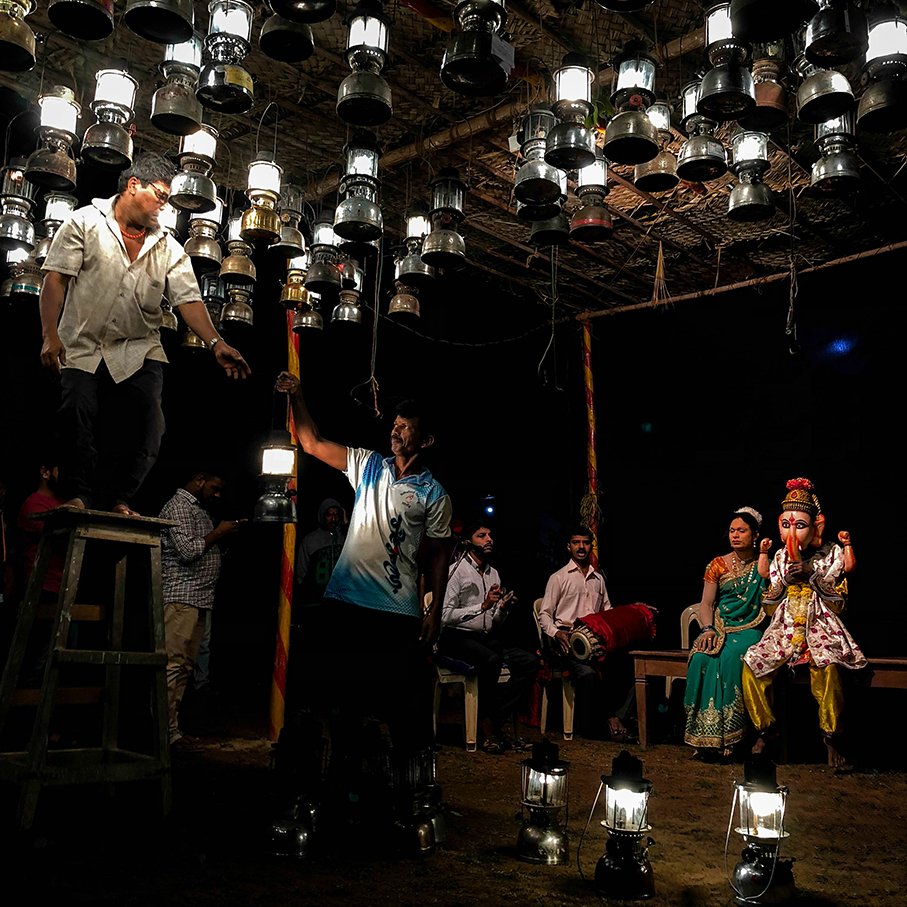 At the jatra (fair) in Vengurla town of Sindhudurg district, people ask Lord Mansishwar to fulfil their wishes. In exchange, they buy lamps and hang them at a temporary shed. These petromax lamps are sometimes used to light the stage for Dashavatar plays. Once I saw some malfunctioning lamps being replaced with new ones mid-performance! 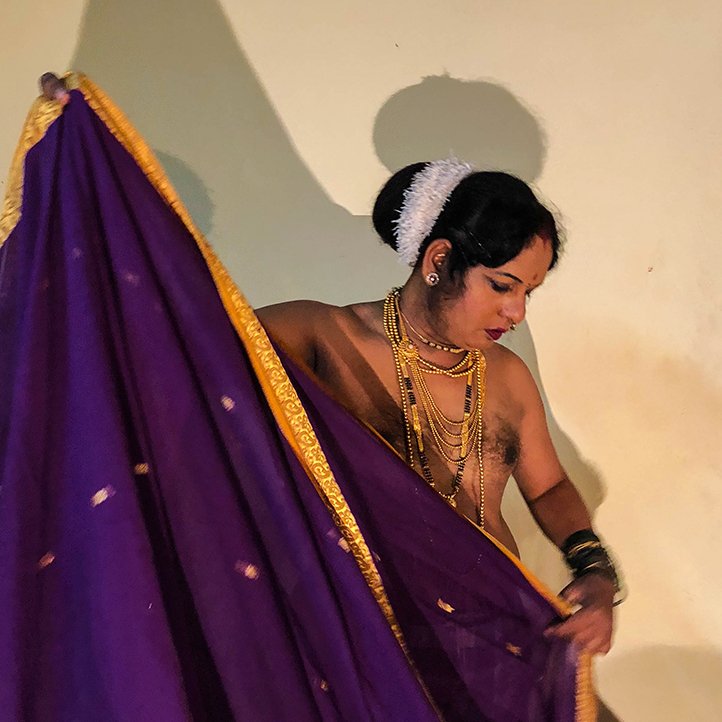 “I have always maintained the dignity of women in my performances and acting,” says Omprakash Chavan, a veteran actor with the Yakshini Dashavatar Company, who has made a name for himself playing female roles. 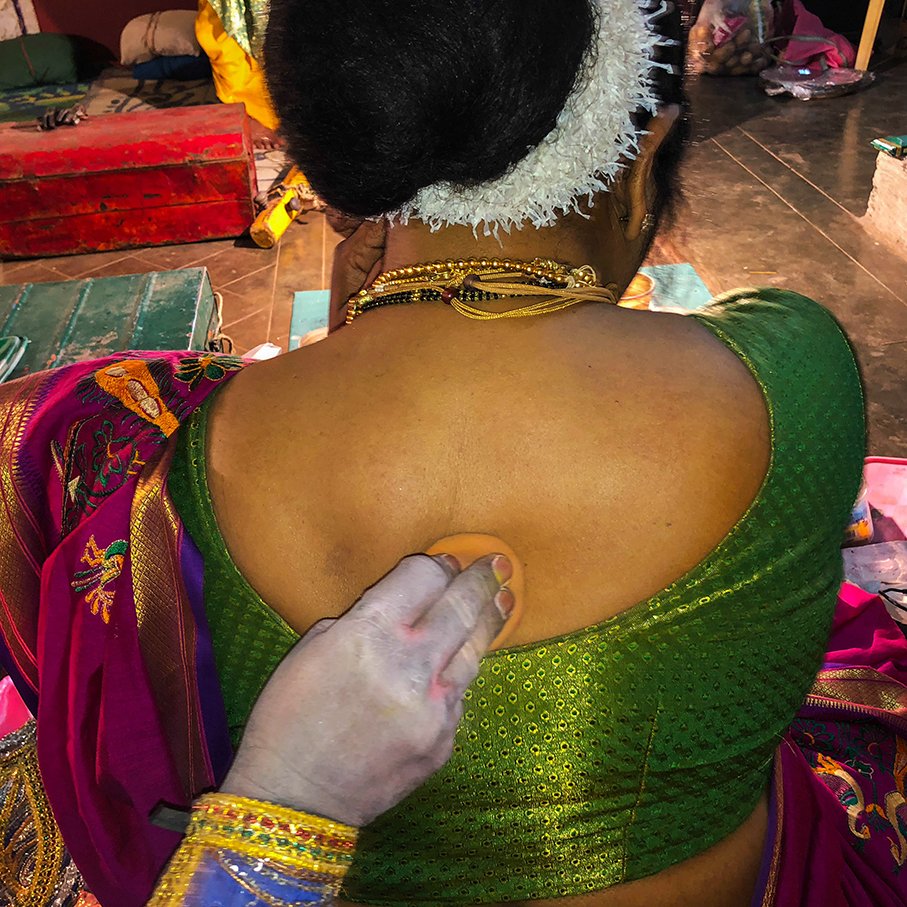 In Satarda village on the Maharashtra-Goa border, the actors help each other to get dressed. They buy costumes and make-up from their modest income – on average, Rs. 300 per show. 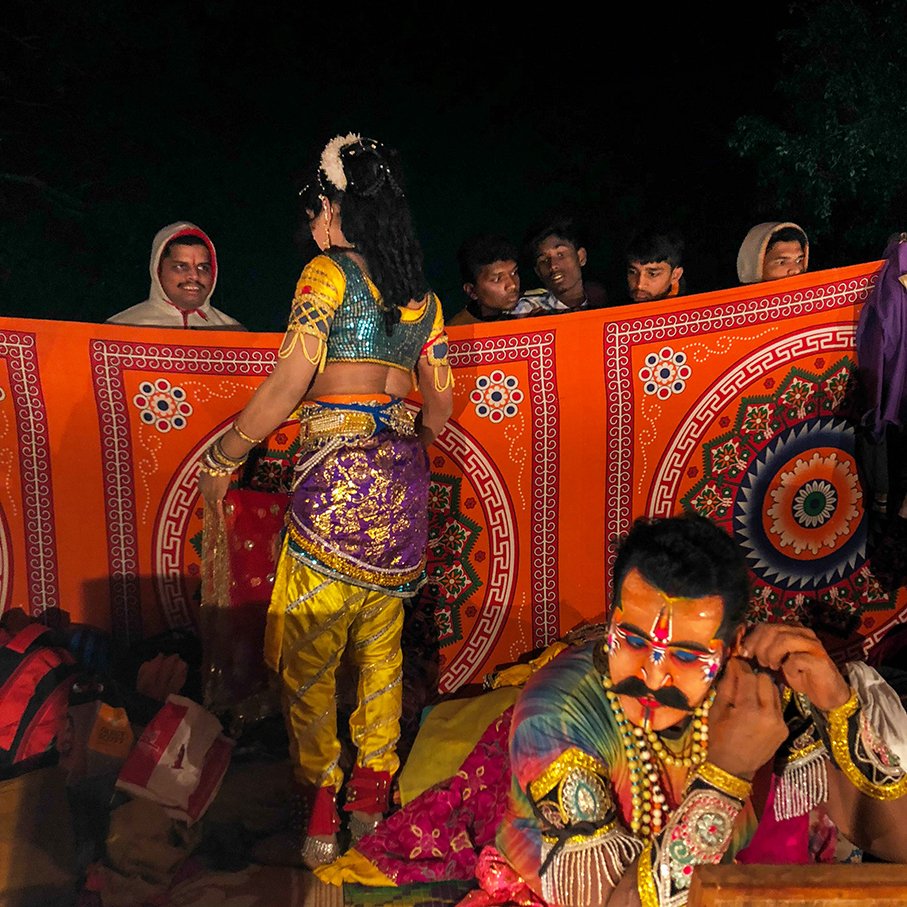 Curious members of the audience peek at the performers as they get ready in a makeshift dressing room at the Mansishwar jatra. 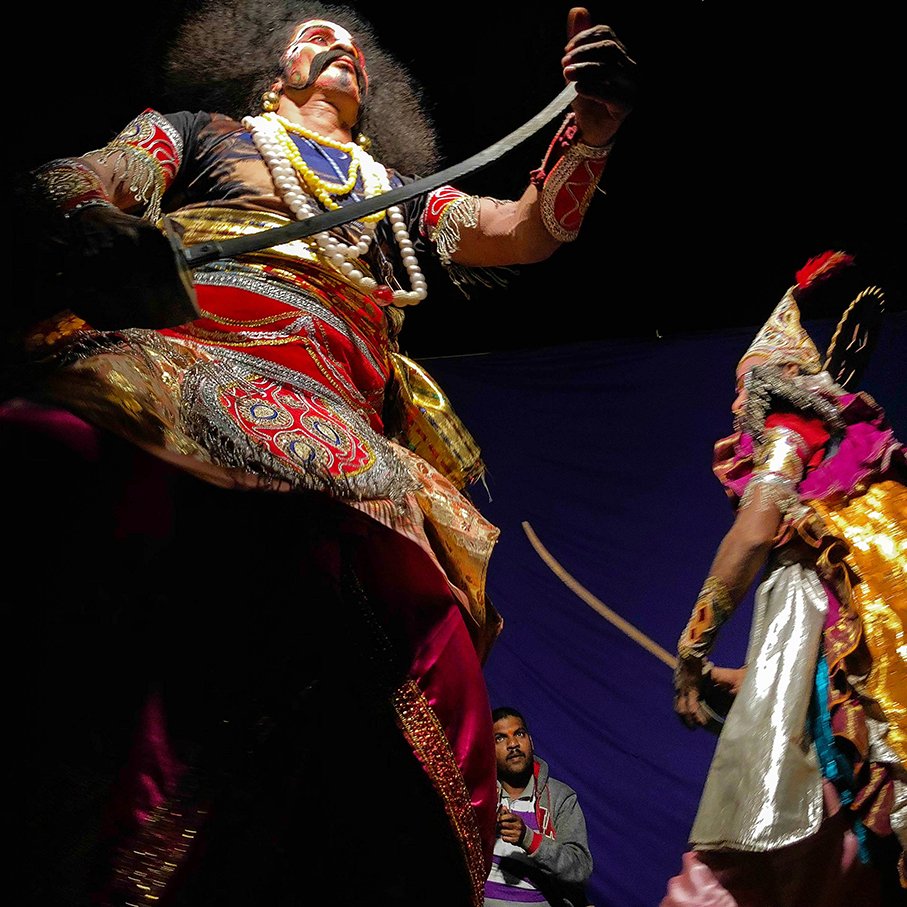 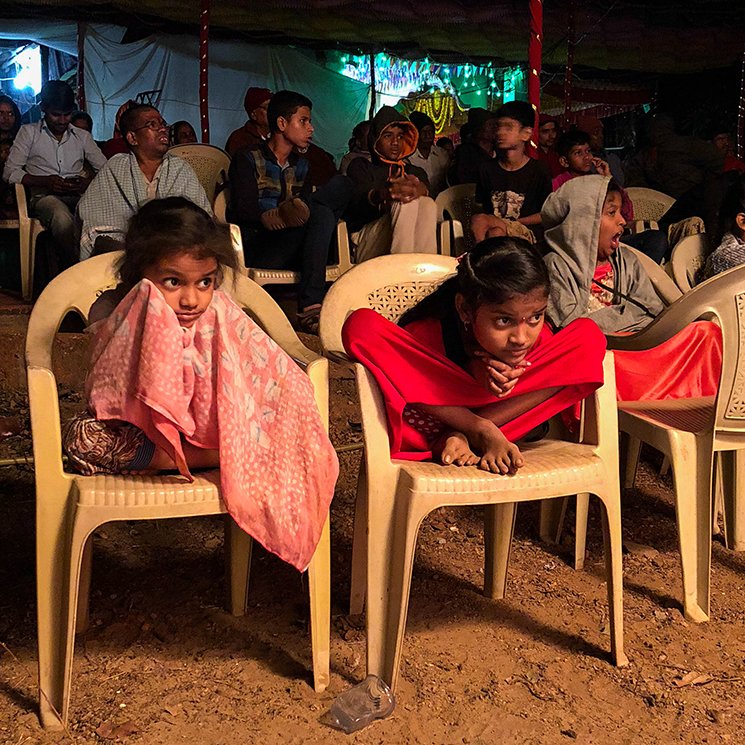 Most Dashavatar performances start after midnight and go on till dawn or around 6 a.m. Enraptured by the stories told on the stage, these young girls stay awake to watch the play. 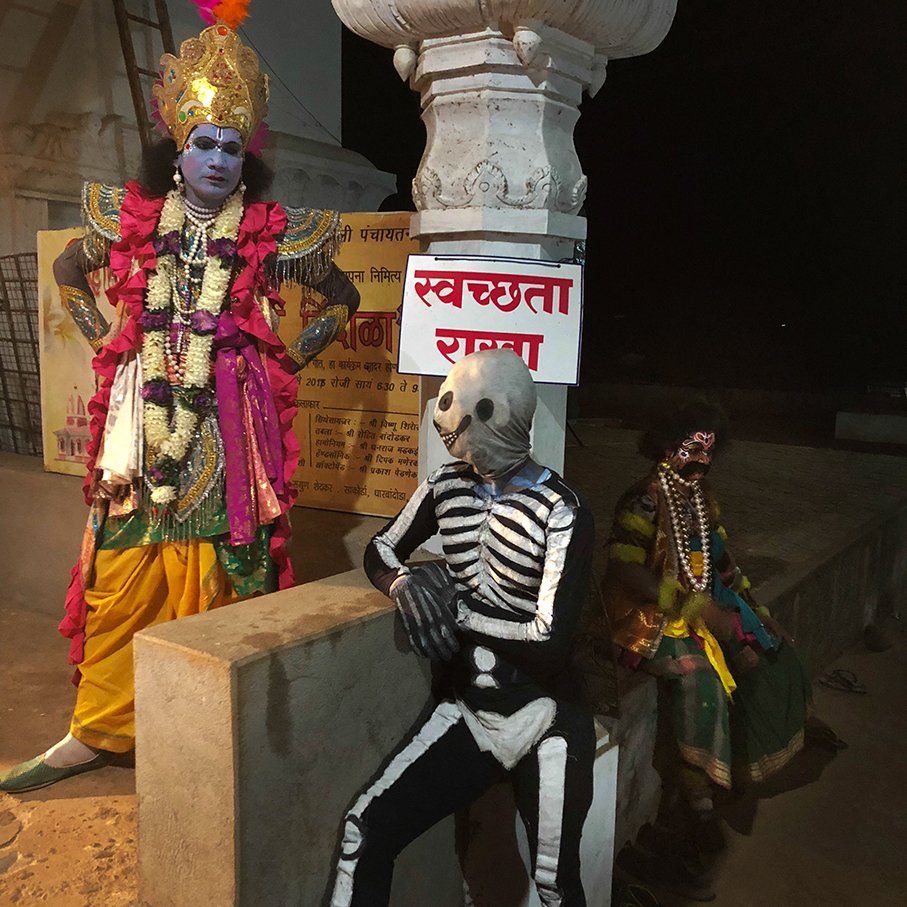 Sameer Mahadeshwar (left, dressed as Krishna; also at the centre in the cover photo on top), the owner of the Yakshini Dashavatar Company, and Uday Lad (right, in a ghost costume) wait to make their entrance, just outside the temple in Satarda village in Sindhudurg district’s Sawantwadi taluka. 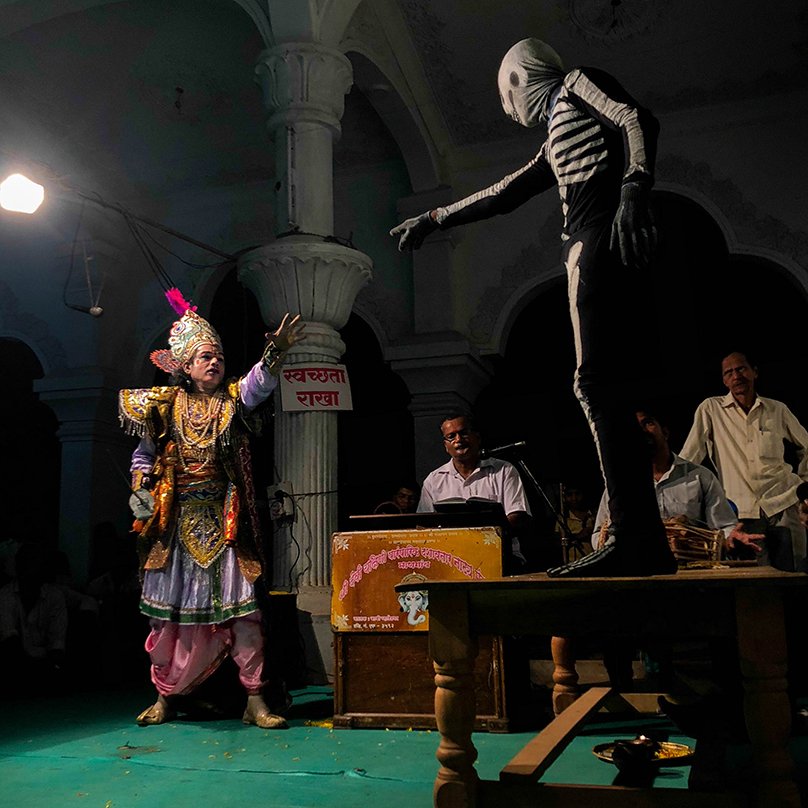 The actors use props that are easily available in the village where the jatra is held. Here, they stand on a wooden table to make dramatic statements. 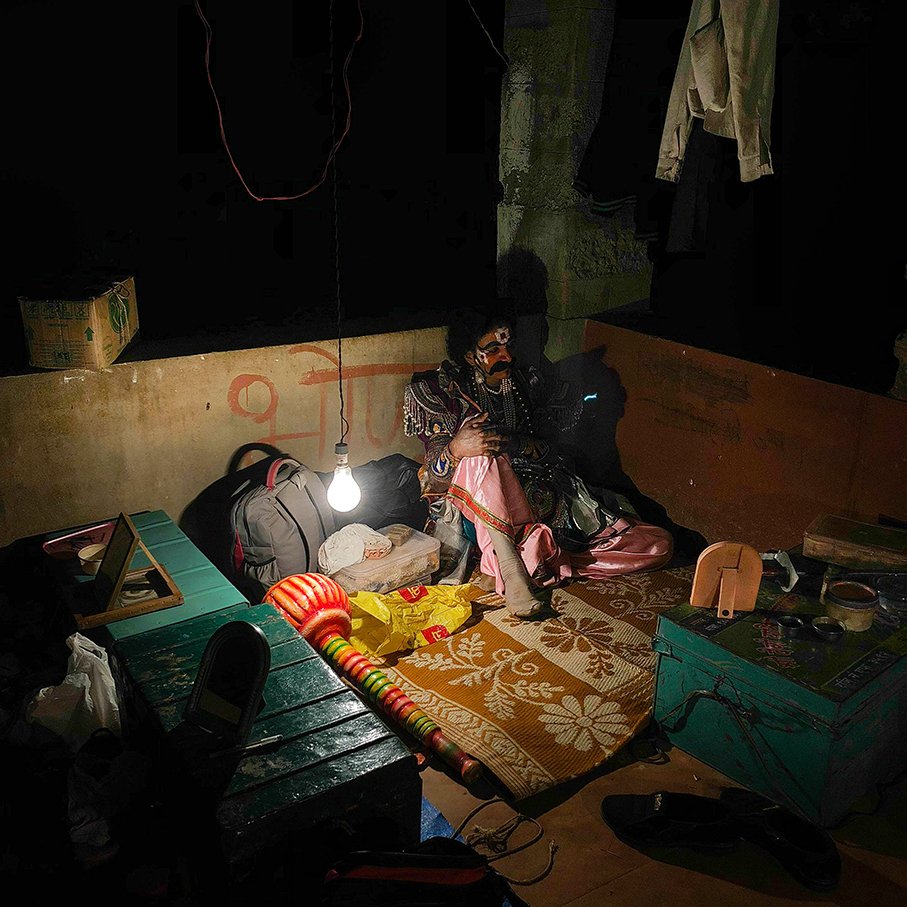 An artist takes a break in a temporary structure between his stage appearances at a fair in Pinguli village of Kudal taluka in Sindhudurg district. 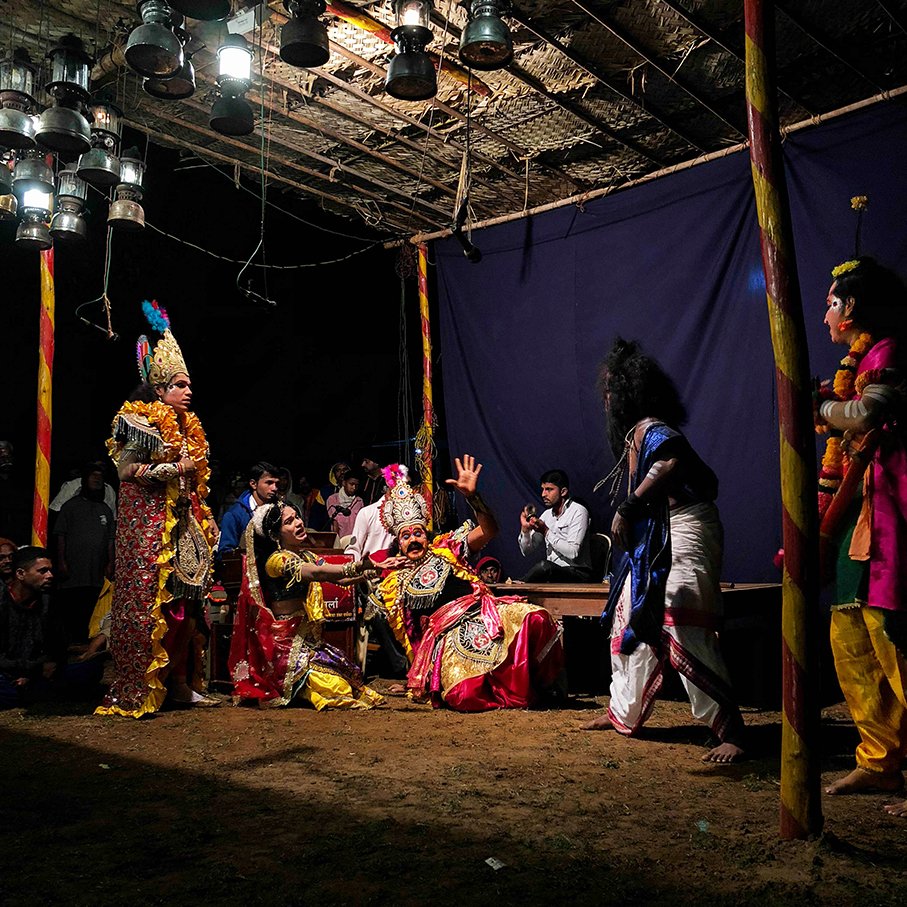 In towns like Vengurla, where the fair attracts a large number of people,  Dashavatar is performed outside the temple premises. A temporary stage is set up and the artists use microphones in order to be to be heard in the back rows. 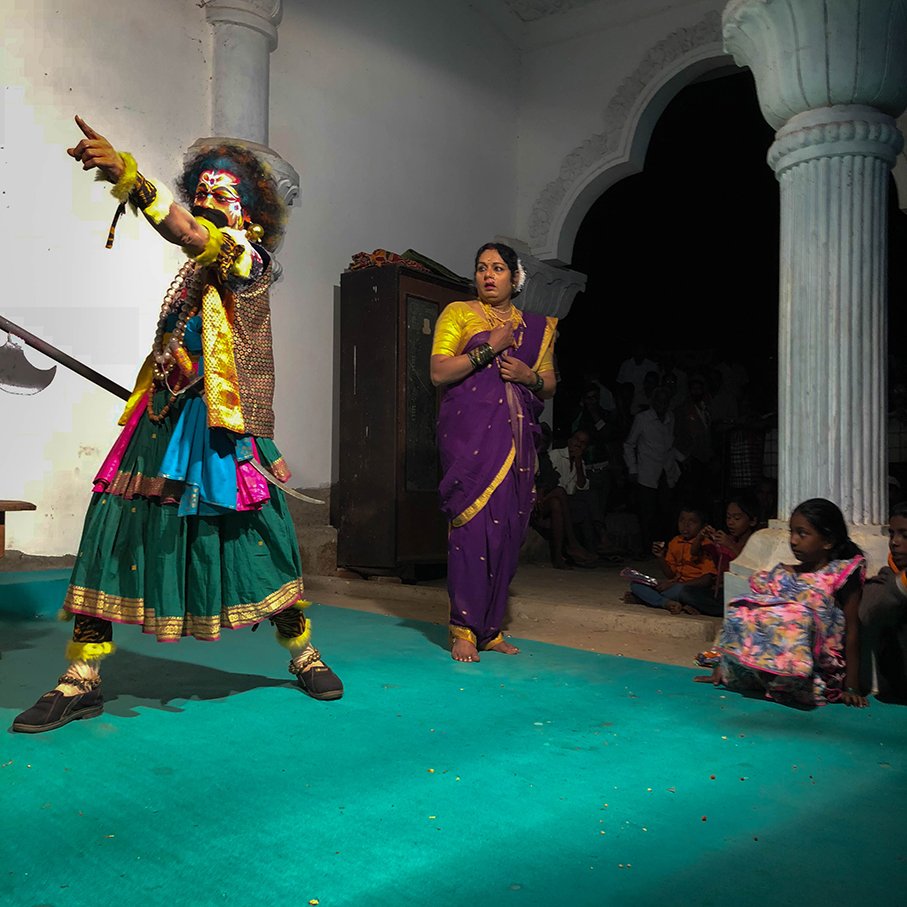 Since their earnings are meagre, performers use whatever is available to create their costumes – such as the canvas shoes worn by this actor (on the left). 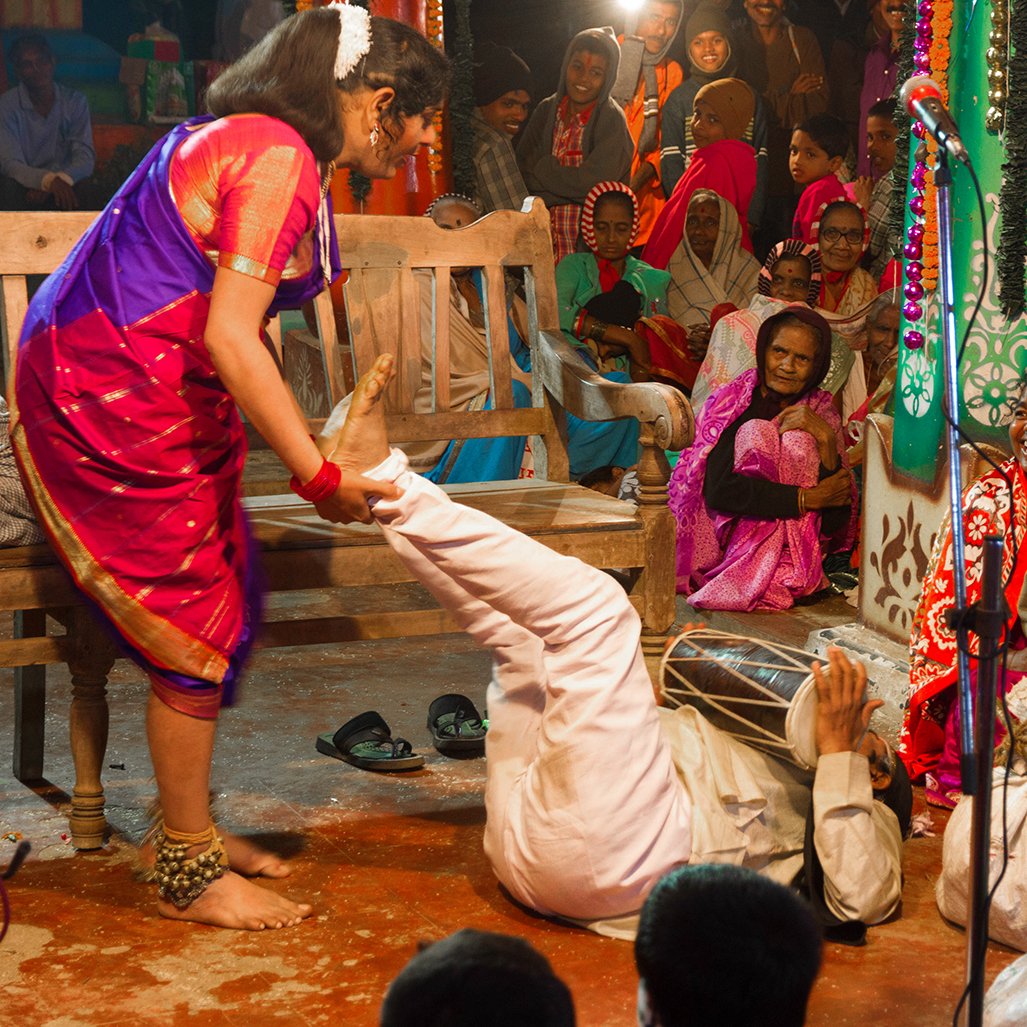 An essential element of a Dashavatar performance is the ‘moral of the story’. Besides the mythological tale, the play must also convey the importance of ethics in everyday life – and deliver some entertainment too. 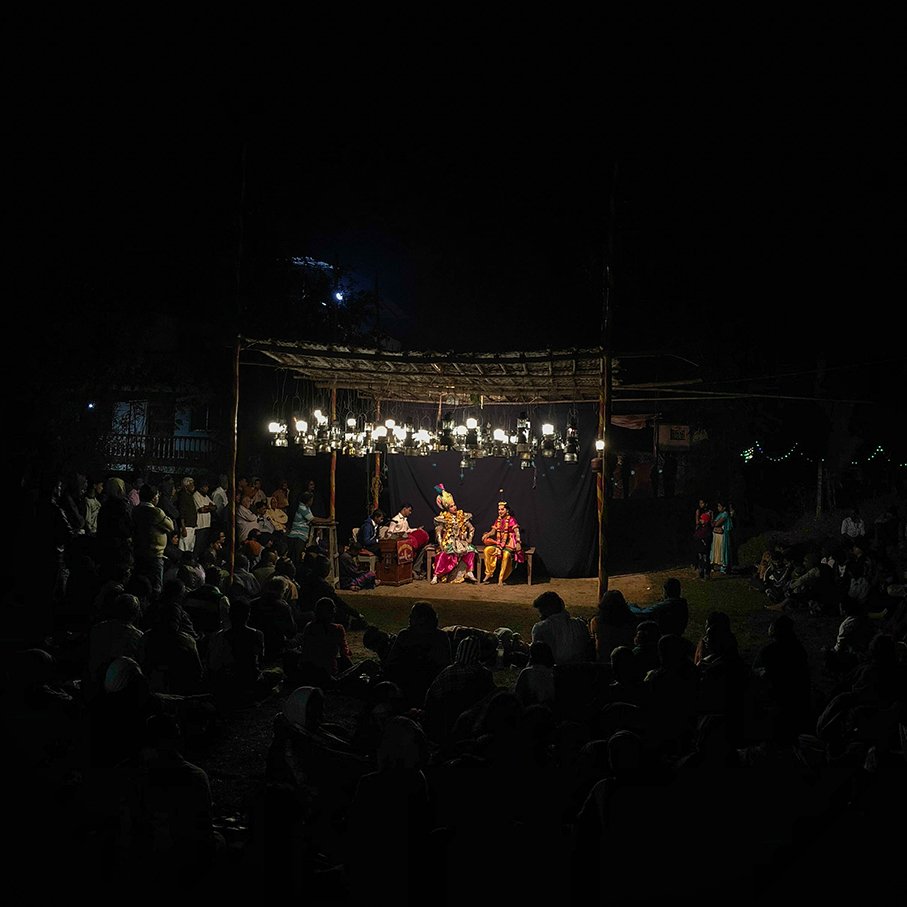 Almost 500 people have come to watch the Dashavatar performance in Vengurla town; they sit on three sides of the stage. This kind of intimate theatre allows for a lot of flexibility – lights can be changed mid-performance, children stroll onto the stage, an actor delivers his dialogues standing among the audience… 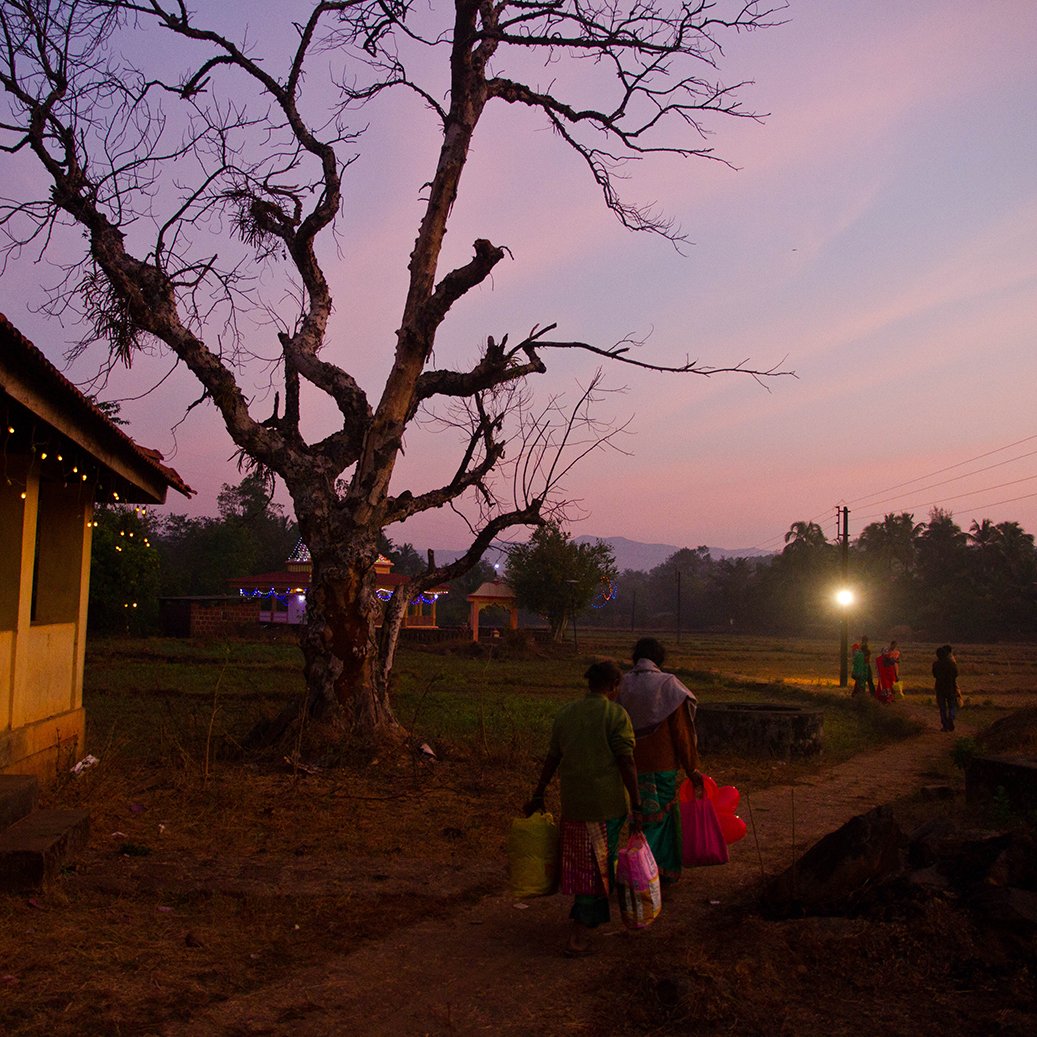 After a rich night of improvisations, people from the audience in Shivdav village of Kankavli taluka begin the journey home, just as the sun is rising .

Indrajit Khambe lives in Kankavli, in Sindhudurg district, Maharashtra. He turned to photography in 2012 after practising experimental theatre for 10 years and running a computer repair shop.

Other stories by Indrajit Khambe