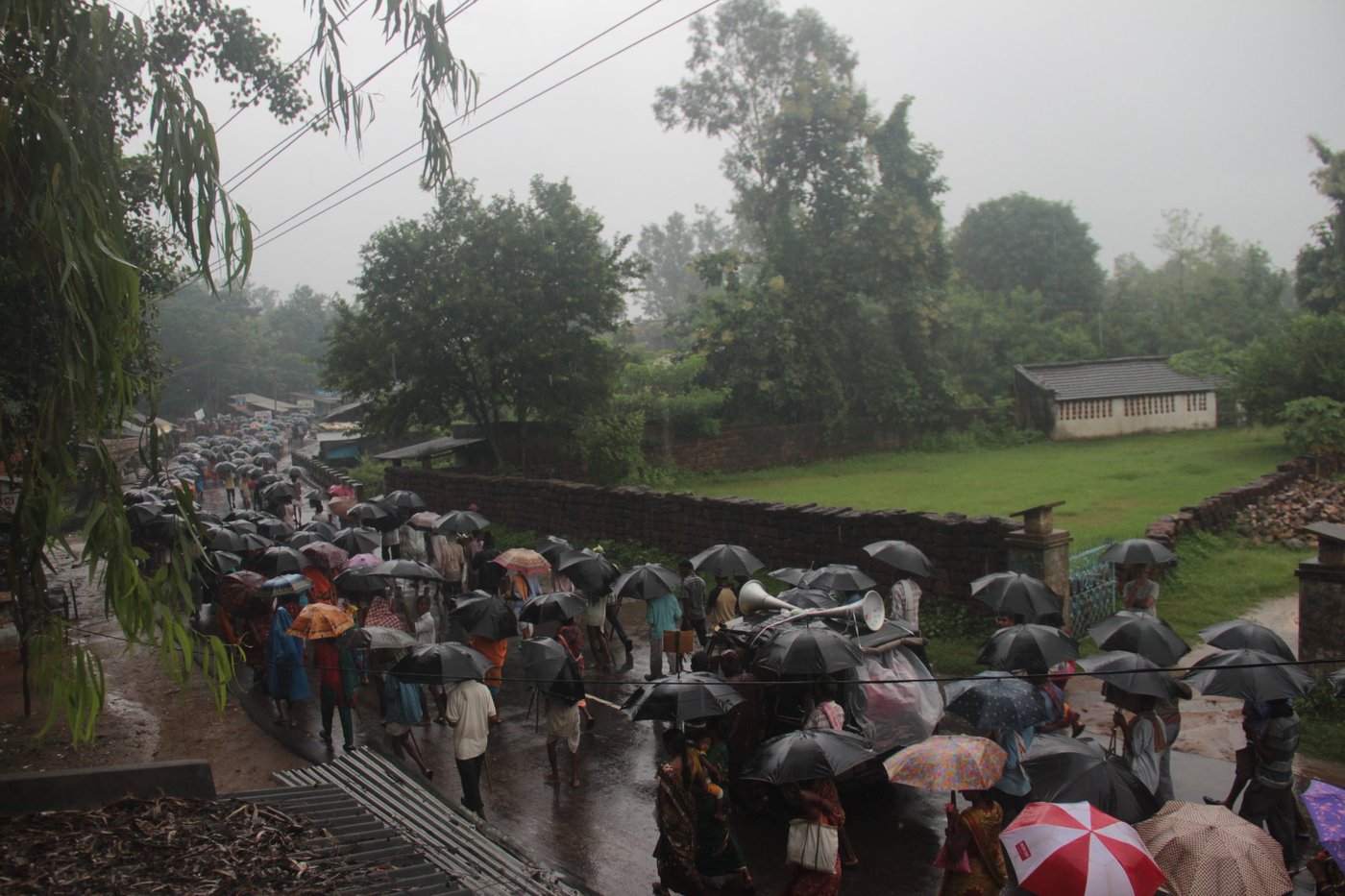 A mutiny in coal-rich Orissa

(Chhendipada, Orissa) It was just after 7 a.m. on Thursday, September 4, when the first marchers—men, women, youth, children—streamed down the street, into view.

They wielded placards in Oriya and English, mounted atop young, green bamboos harvested from their lands for this overcast morning. (Turned upside down, these could double up as a counter to police batons, a villager had explained to me the previous afternoon: “We won’t hit them first. But if they hit us, let them not expect us to take it lying down.")

As dawn’s drizzle turned into pouring rain, the villagers' slogans rose to a crescendo through a canopy of black umbrellas.

“Modi used to sell tea, now he wants to sell us to Adani”, one man hollered.

“Give us land if you want to take our land”, chanted a gaggle of women farmers in bright sarees and rubber slippers.

As I took photographs of the hundreds of protesters, I was periodically asked, “Are you with us, or with the company?” It was a reflection of deep mistrust of the media among villagers, who alleged that local journalists were routinely bribed by industry, and did not report their side of the story. 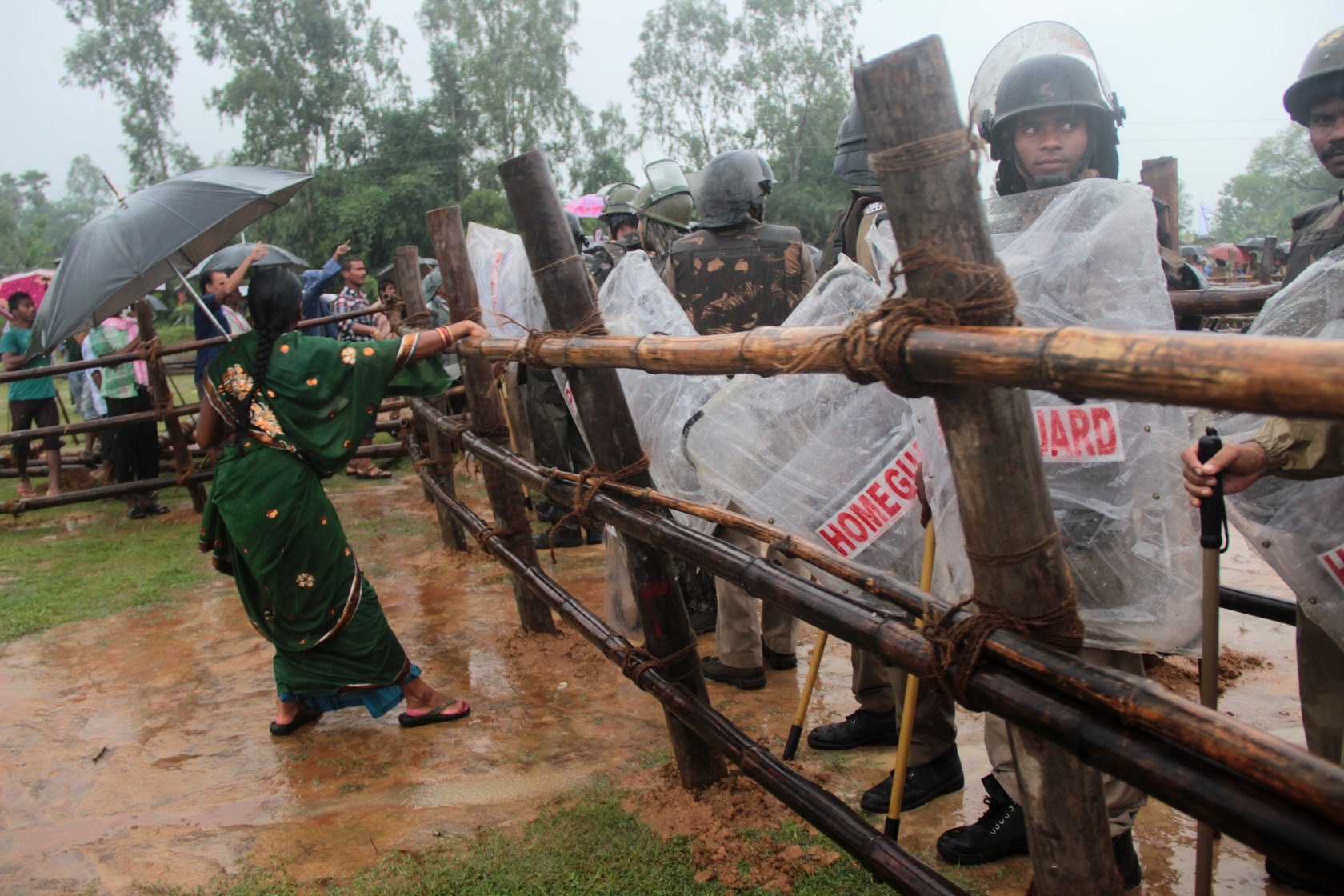 The mutinous crowd turned into an open ground looking onto distant blue mountains. This was the bucolic site of the environmental hearing for a proposed coal mine, called by the administration in Chhendipada town in the forested, mineral-rich Angul district of the eastern Indian state of Orissa.

Over 600 hundred tense, unusually restrained police personnel and home guards deployed at the ground since dawn with rifles, batons, tear gas and protective gear looked on.

The protesters started taking apart the rickety stage the forces were encircling. Some wrecked the loudspeakers, then the blue and red plastic chairs. Others dismantled the bamboo boundaries, erected to separate officials and company representatives from the public during the hearing. Men and boys carted off these poles through the mud and slush for added measure.

This done, the crowd turned its attention to district officials and (rumoured) company representatives who were attempting to leave, embraced by the protection of a tight police cordon.

Raucous protesters sat down on the winding lane leading out of the ground, insisting that the officials could go only after formally calling off the hearing.

“And say it is cancelled because of people’s strong opposition,” they demanded.

A fire engine had pulled up minutes ago, followed by a truck marked ‘Riot Control Vehicle.’

Faced with an unyielding crowd, the district official weakly declared that the public hearing was cancelled, because the villagers were opposed to it. Loud cheers broke out.

It was now 8.54 a.m. - over 90 minutes before the hearing was meant to officially begin. 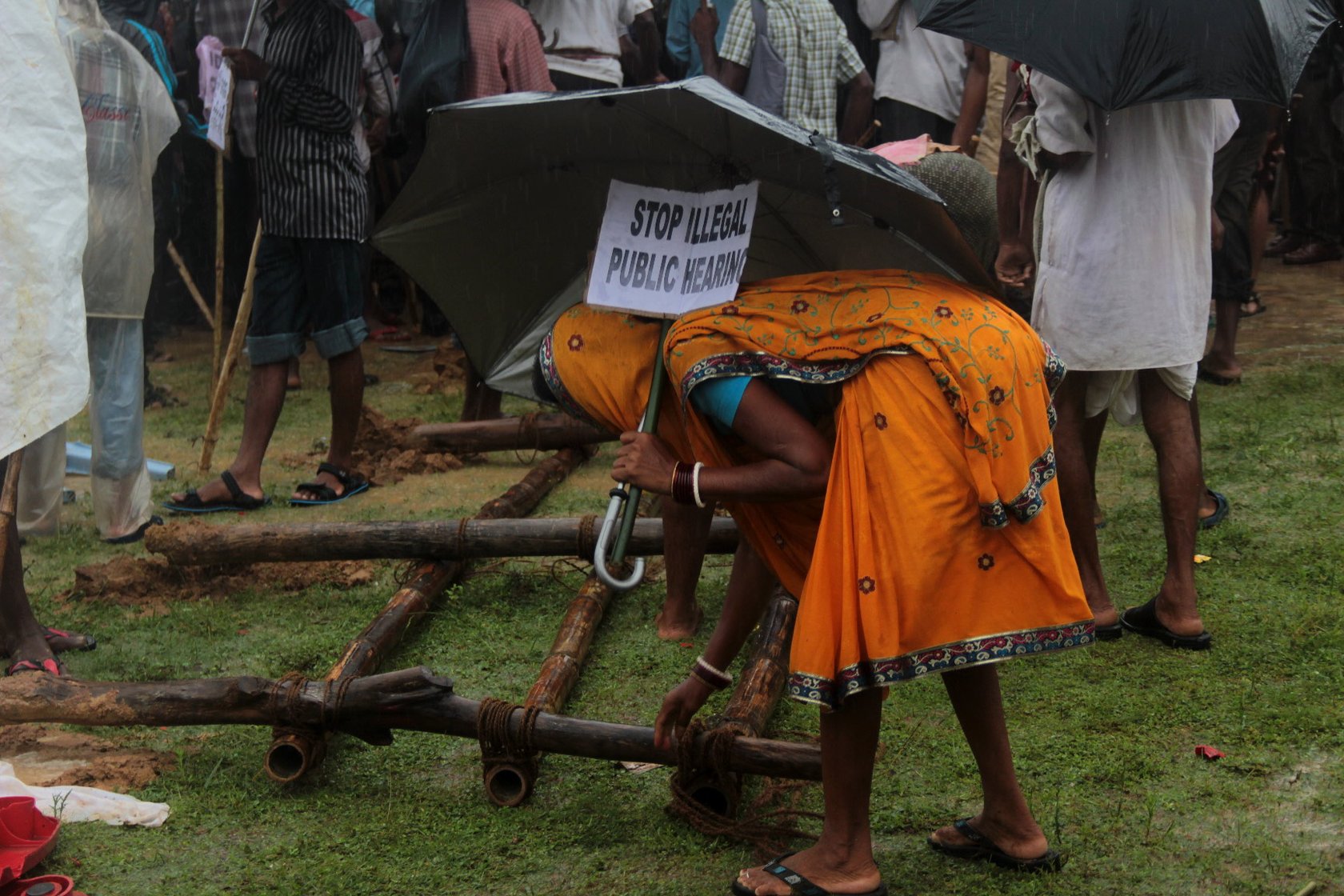 Resource conflicts are an intensifying and under-acknowledged phenomena across the coal-rich farms and forests of central and eastern India. But few urban Indians know or think about these pitched battles unfolding almost every month in rural, often remote, areas of their country.

Yet, they increasingly must. Firstly, because where they live, work and play will need a widening range of energy sources to meet growing demand – a fact brought home yet again in recent days by a power cut in Mumbai and news of tariff tussles and fuel shortages.

But also because the conduct of the state and corporations in rural areas is key to reforming discredited public institutions and processes, and to creating a just and accountable policy regime around India's natural resources.

Take for example the proposed coal mine, for which the environmental hearing on September 4th was called, first ignoring intense rural protests, and then reluctantly abandoned – the third time this has happened in as many years.

Located in Orissa’s Angul district, home to one of India’s largest coal deposits, the mine contains an estimated 12 million tonnes of coal , with a proposed life of 48 years. The mineral lies beneath 7,500 acres of a thriving agrarian economy spread across nine villages. Over 10,000 people live here - their education and relative prosperity made them akin to a rural middle class, with the capabilities and the resources to assert their rights.

This rectangular tract of rural land was marked out as the Macchakata Coal Block by the Ministry of Coal, one of several coal blocks which it created in this area. The mine was allotted in 2006 to MahaGuj Collieries Ltd, a public sector power company jointly formed by the Maharashtra and Gujarat state governments.

As has been the case so often, rural India’s forests, farms, mountains and water bodies were meant to make way for open-cast mines and urban India’s fuel, with little attention paid to the corruption, conflicts and injustices these transitions produce. 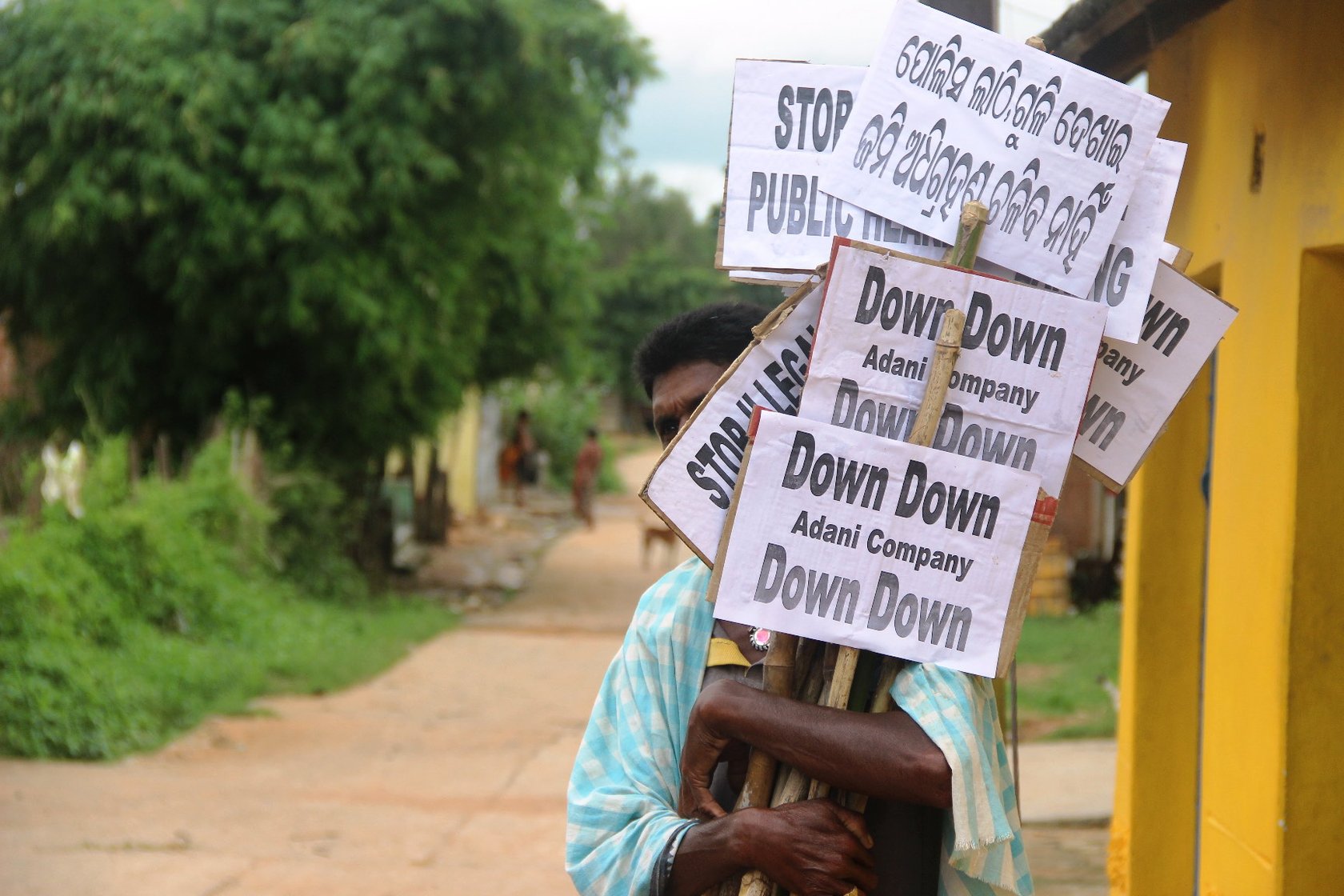 A villager prepares to express opposition to Adani Enterprises Ltd, an industrial behemoth contracted to remove nine villages, including his, for a proposed coal mine

“People in Bombay (sic) will turn on their air conditioners, while we will lose our lands and roast in the heat of a rehabilitation colony, outside the coal mine?” one Macchakata farmer asked me a day before the hearing. “Why?”

(Several coal mines and industries operating in Angul have landed it the dubious distinction of the state’s most polluted district , where summer temperatures can hit the late 40 degrees centigrade.)

In 2010, MahaGuj Collieries Ltd signed an agreement with the Gujarat-based private industrial behemoth M/S Adani Enterprises Ltd to start and operate the block. Typically, the details of the deal have not been shared with the villagers whom the state is trying to evict. Neither is Adani mentioned in public documents like the mine’s Environmental Impact Assessment report , released for the September 4 hearing.

The company’s response to my phone calls, texts and an email was that its officials were travelling. Ten days later, there was still no response to my questions.

But Adani— deeply linked in local perception to Prime Minister Modi , since he campaigned in its aircraft during elections this summer—is now the prime target of local protests, closely followed by IDCO – the Odisha government body with a violent track record of acquiring land from farmers for industry. In conversations, villagers also brought up the bloody fate of other displaced communities in the district, seeking rehabilitation from mining corporations (WARNING: Video contains graphic content of violence).

Rural anger in the area was equally directed at the administration and regulatory authorities. In recent times, Supreme Court rulings and inquiry commission findings have outlined how in the complex policy arena of natural resource governance, authorities have consistently undermined public interest and depleted the public exchequer. Yet, there is little attention paid to the fates of protesting rural communities, who have borne the brunt of this misconduct.

In the villages earmarked for erasure, residents were quick to point out to me that the coal block the state was trying to displace them for was among the 218 coal mines whose allotments were declared as “arbitrary and illegal” by the Supreme Court on August 24. These blocks had been allotted beginning 1993, when the state wanted to involve the private sector in mining for power production and other captive uses. Hearing public interest litigation, the court held that the allotments “followed no fair and transparent procedure, resulting in unfair distribution of the national wealth.” 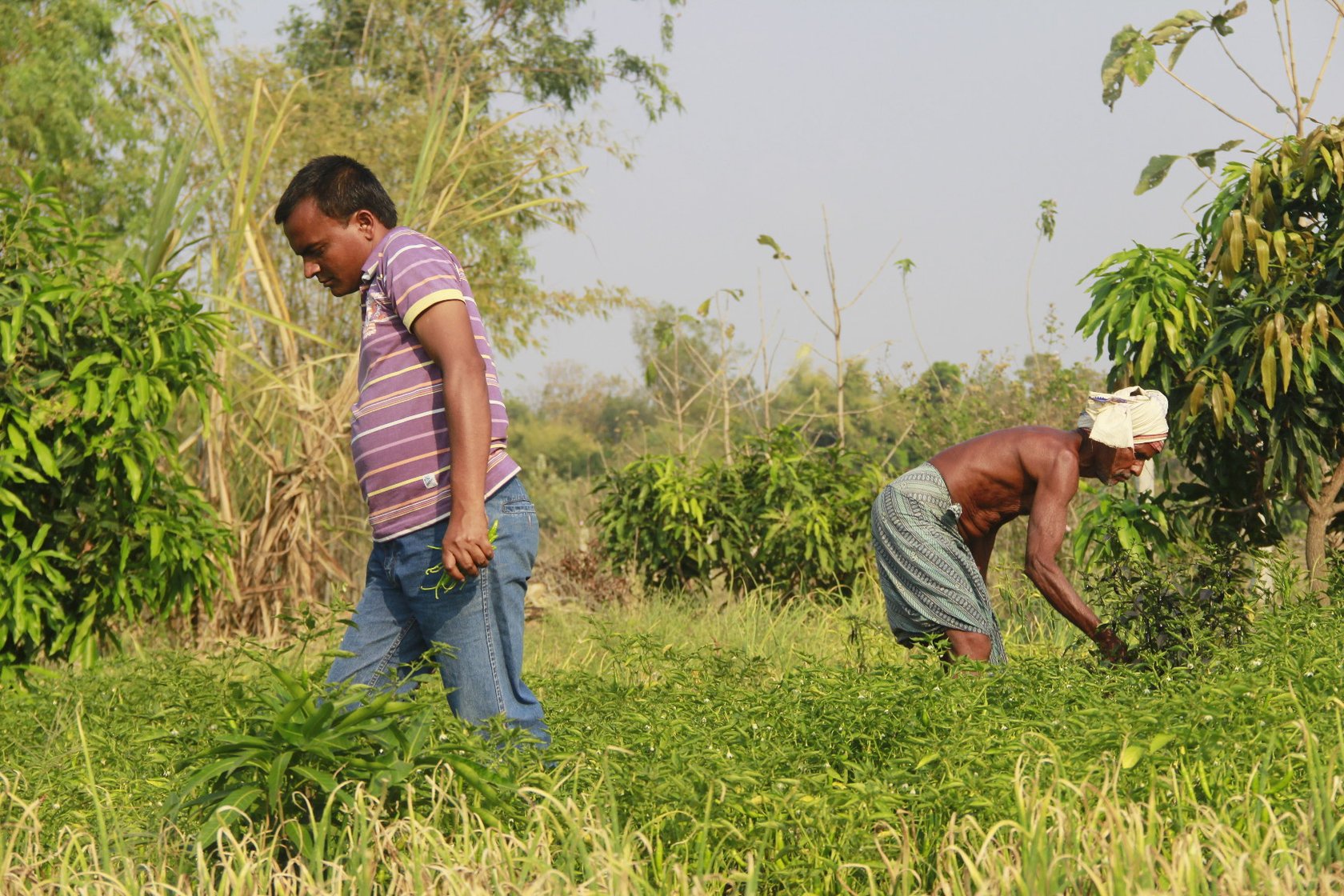 Sujit Garnayak and his father harvest their vegetable patch in Bagdia village. Farms in the area rest atop rich deposits of coal

In Bagdia village, I spoke to the head of the protesting villagers Prafulla Pradhan. A portly, baby-faced man in his 60s, who looked like he should be telling stories to grandchildren, not bracing for street fights with the state, Pradhan asked me, “When the government has told the Supreme Court this week that these allotments should be cancelled, how is the company going ahead to try and get environmental clearance for the block?”

In another village, a school teacher who declined to be named since he had a government job and feared retribution for speaking out against the mine, brought out a letter from 24 August addressed to the state’s Pollution Control Board - the body in charge of environmental regulation and public hearings. Signed ‘Villagers in Machhakata Coal Block’ , the 2-page letter articulated numerous factual problems with the Environmental Impact Assessment (EIA) report released for the mine. The teacher wondered why board officials routinely accepted faulty reports from distant, industry-commissioned consultants, but never paid attention to contrary evidence offered by villagers about the lands they lived in.

What rankled residents most was the fact that the EIA did not mention, let alone assess, the fact that the 7,500 acres of agricultural and forest land to be acquired for the proposed mine currently provided the 10,000-odd residents of the area with a year-round stream of food, work and income, which the coal mine would finish off. This week, I saw lush paddy fields, and sesame, pulses and mushroom harvests in the area. On a March visit, villagers had pointed out sprawling fruit orchards, and vegetable farms to me.

The EIA report’s omissions were further proof to locals, if any was needed, that in the eyes of the state and corporations, costs incurred by rural citizens did not need to be accounted for while clearing projects.

The new Narendra Modi government has barely acknowledged this deep absence of trust between government institutions, corporations and citizens in India’s mineral-rich areas. Since taking power this May, it has instead moved to quicken mining and industrialization, with a focus on altering laws to shut out the voices of rural Indians from decision-making. 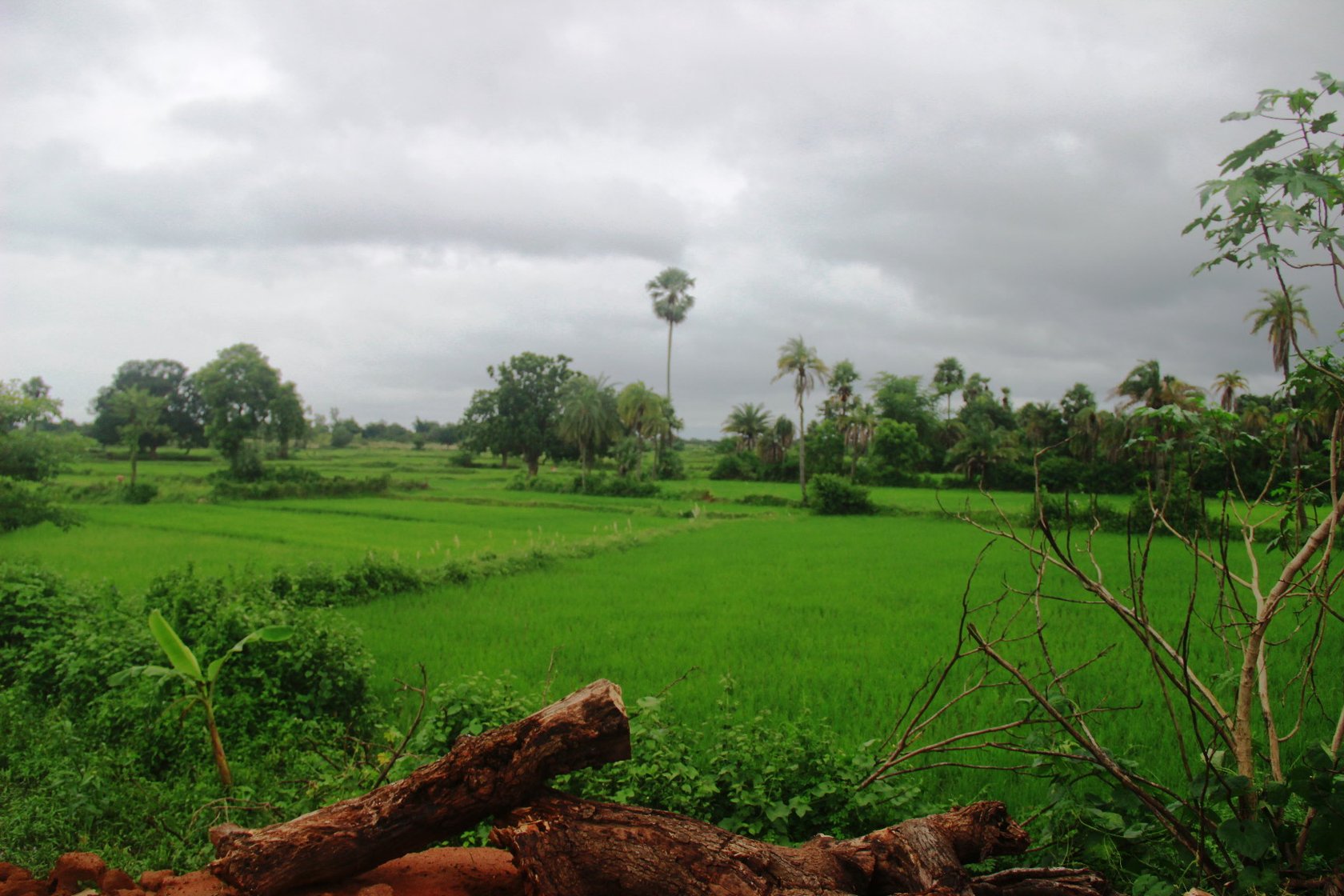 Below these lush paddy fields lie vast deposits of coal. Locals see no benefits in being displaced for mining

For example, the Ministry of Environment and Forests (MOEF) has decided to do away with the requirement of public hearings as part of the environmental clearance process for some projects, such as coal mines seeking expansion – a move, which was begun by the UPA towards the twilight of its regime. As a recent Amnesty alert suggests, on the ground, communities will experience these changes in the form of renewed state excesses and violence against them. The MOEF is also devolving clearances for other projects to state governments, even though their regulatory capacity and intent is suspect.

According to two senior bureaucrats I spoke to in recent weeks, there are also growing demands on the Ministry of Tribal Affairs from the Prime Minister’s Office and the MOEF to remove the requirement of involving gram sabhas or village assemblies in decision-making around the cutting down of forests for mining and linear projects – currently mandatory under the Forest Rights Act.

Similarly, one of the first things Minister for Rural Development Minister Nitin Gadkari did on assuming office was to begin work on altering the new Land Acquisition Act. The new law had come into effect in January 2014 - a belated replacement for its colonial-era predecessor, which had been in force since 1894, and had enabled the forcible displacement of rural communities, and accompanying human rights abuses. The note prepared by the Rural Development Ministry proposes that gram sabha consent and social impact assessment provisions in the new law be diluted.

A bureaucrat involved with the creation of the land acquisition law expressed doubts about how the proposed dilutions might play out, telling me last month, “Even if these changes are made, how will they be forcibly implemented on the ground?”

In Prime Minister Modi’s grand vision of development, they will have to be engaged with greater democracy and dignity, not less.