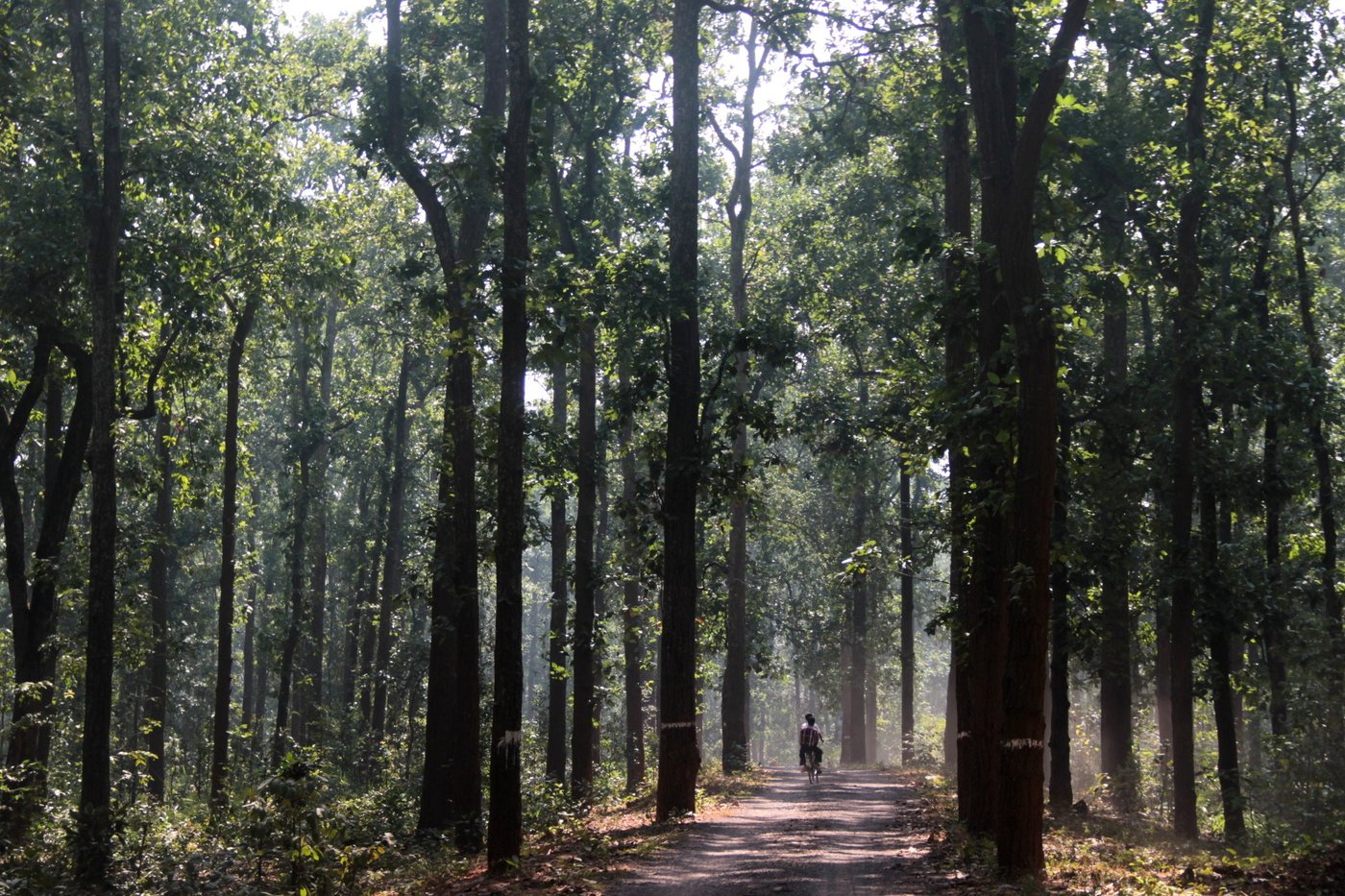 Not Just A Coal Block

The Hasdeo Arand forests spanning north Chhattisgarh’s Korba and Surguja districts comprise some of central India’s best contiguous tracts of forests, and are home to perennial water sources, rare plants as well as wildlife species, including elephants and leopards.

But this rich eco-system is also under threat because of the vast coal reserves it holds – the Hasdeo Arand Coalfield mapped by the Ministry of Coal has over a billion metric tonnes of proven coal reserves, across an area of 1878 square kilometres. 1502 square kilometres of this consist of forests.

The threat is accentuated with the central government’s swift moves in past weeks to hasten coal mining and acquisition of rural land from individuals and communities by corporations.

After its controversial coal mining bill was not passed in Parliament by the Rajya Sabha, the government re-issued an ordinance on 24 December 2014 to auction lands and forests across over 90 coal blocks (or mines), and to permit the commercial mining of coal.

On 29 December 2014, it issued another ordinance which dilutes the public hearing, consent and social impact assessment provisions of the Right to Fair Compensation and Transparency in Land Acquisition, Rehabilitation and Resettlement Act, 2013 for a range of projects wanting to acquire land, including power projects.

News reports and official documents indicate the government is also looking to weaken environmental and adivasi rights protections that regulate mining in forested areas, in a bid to open up and transfer resource-rich lands to corporations.

In Hasdeo Arand, villagers, primarily adivasis from the Gond community, have been debating these moves, which will profoundly impact them.

In mid-December, across 16 villages, local residents held gram sabhas (village assemblies) and passed resolutions asking the government to not auction these forests and their lands to mining corporations.

They also demanded that the government implement the PESA and Forest Rights Acts. The two laws recognise the rights of local adivasi and forest-dwelling communities, and mandate their involvement in decision-making around natural resources, including their consent to proposals for destruction of forests. 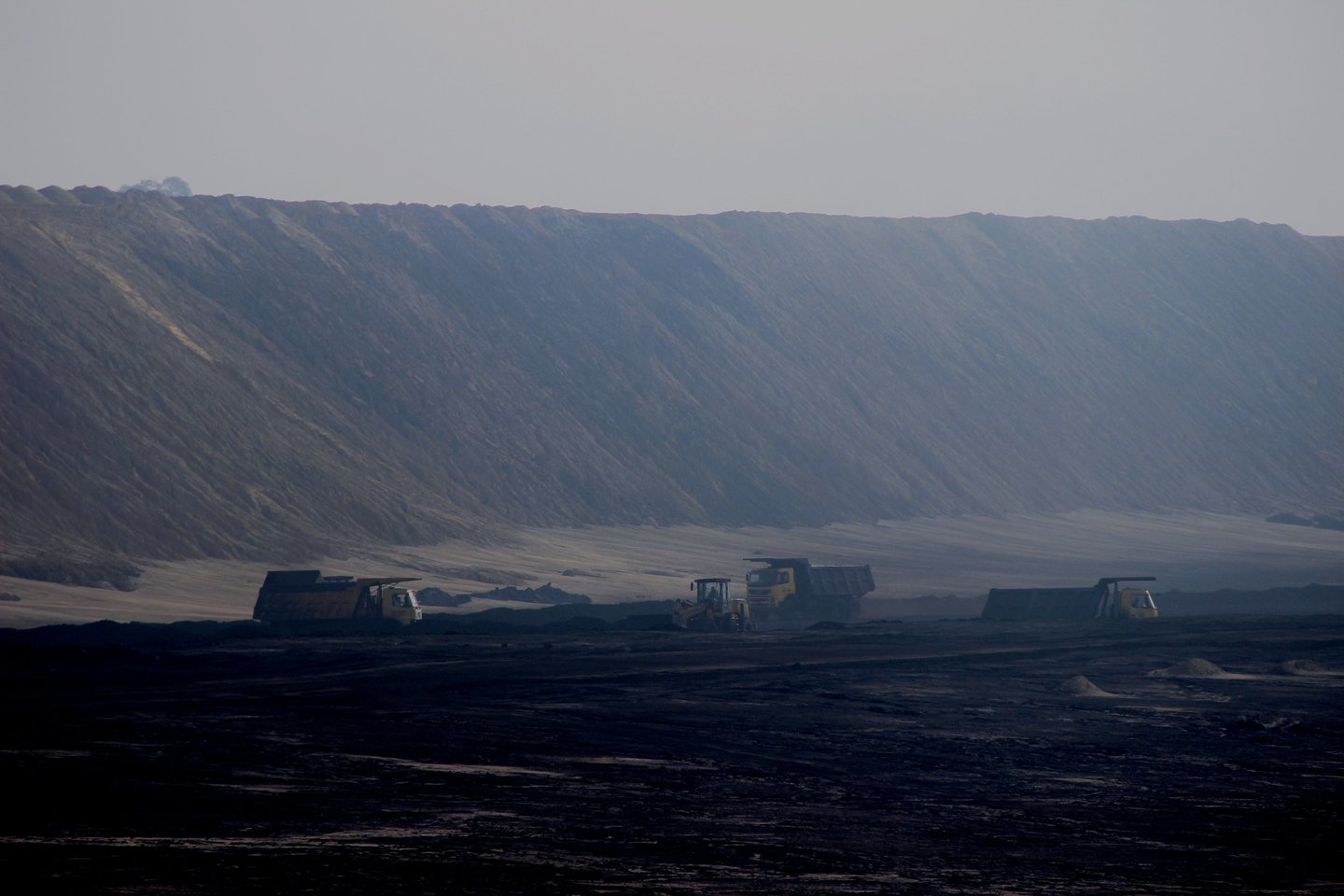 Since 2011, Adani Mining Pvt Limited has been operating the largest coal mine in the Hasdeo region – the Parsa East Kante Basan block, for which forests and farm lands belonging to villagers were stripped bare. 30 coal mines are proposed in this region so far 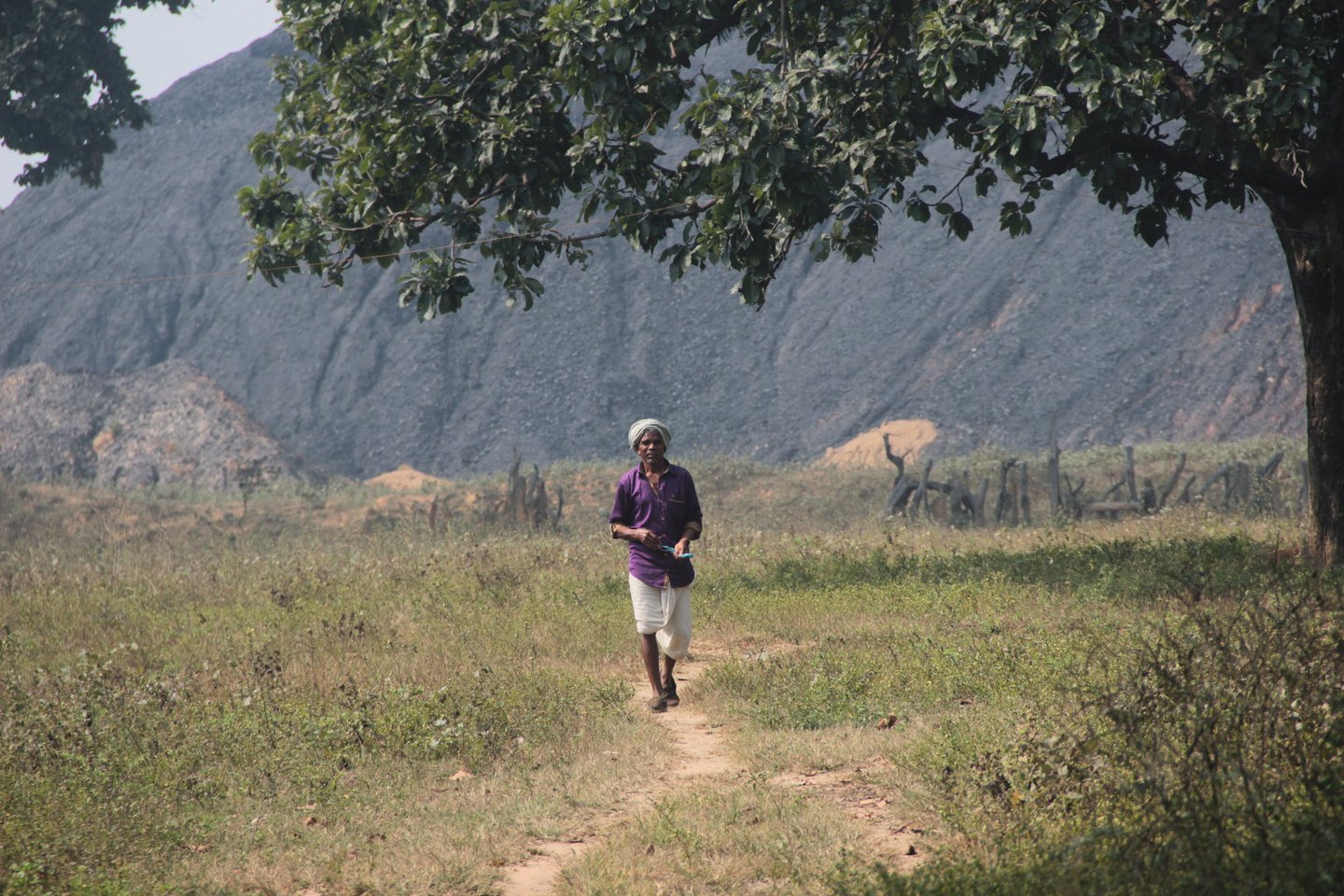 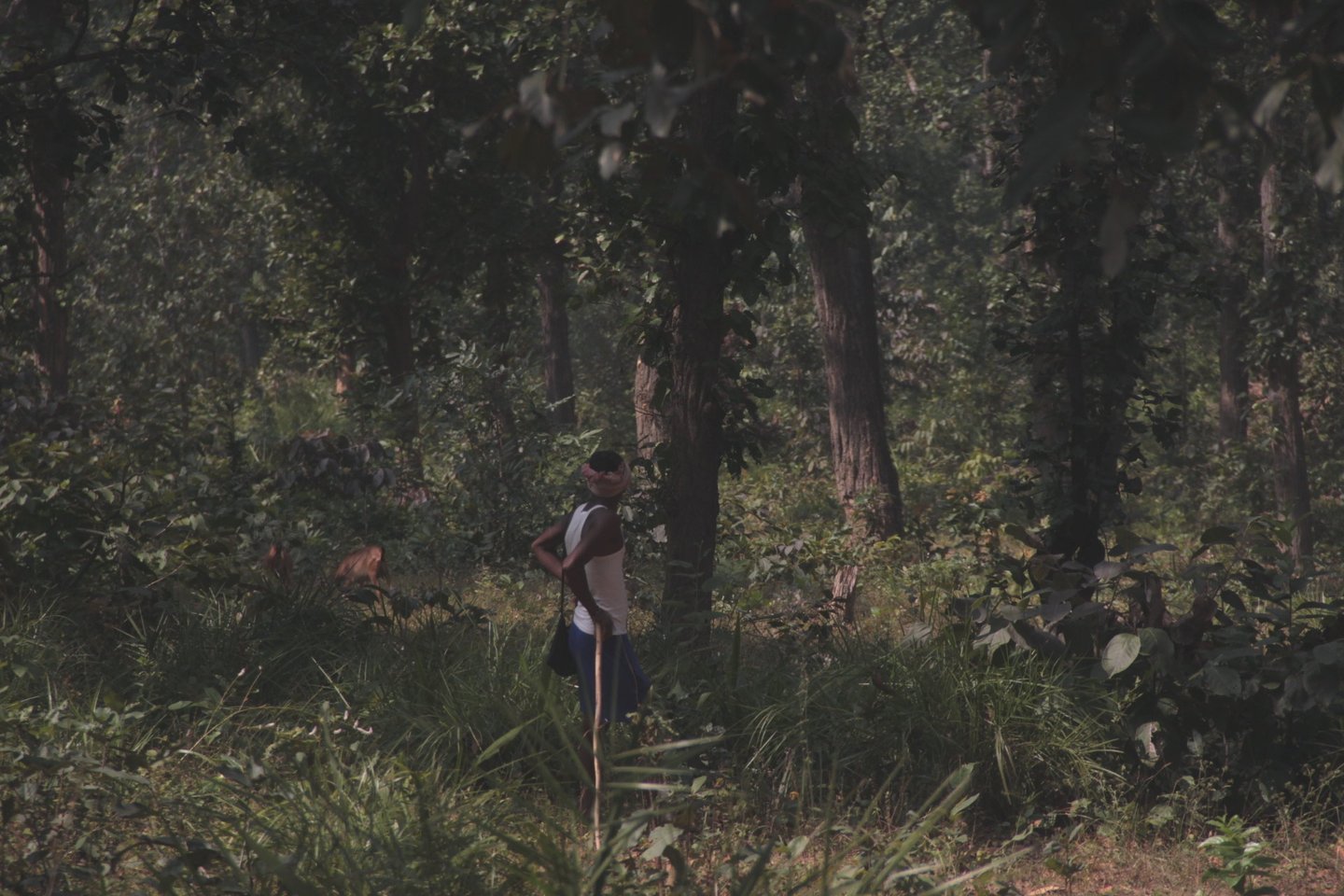 A 2010 evaluation by the UPA government categorised much of the Hasdeo forests as a ‘No-Go’ zone, i.e. to be kept beyond the bounds of mining – an assessment, which has since been set aside. A proposed elephant reserve in the region was not notified, following lobbying from industry bodies in 2008, who pointed to Hasdeo’s rich mining prospects 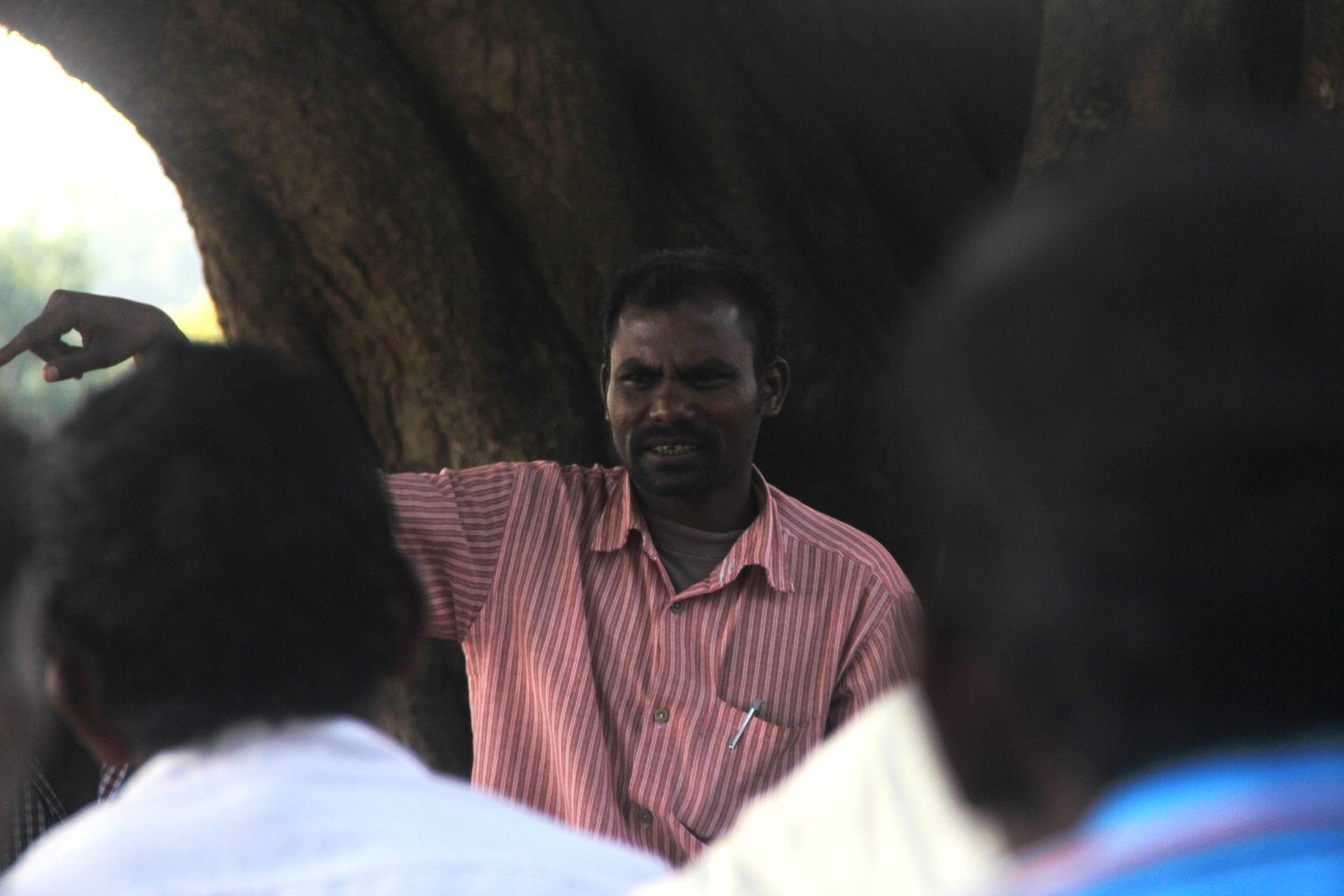 The Hasdeo Arand Bachao Sangharsh Samiti is a village-level movement, which meets every month to discuss protection strategies. Here, villagers discuss the recently issued coal block ordinance, and its adverse impacts on the forests and their lives 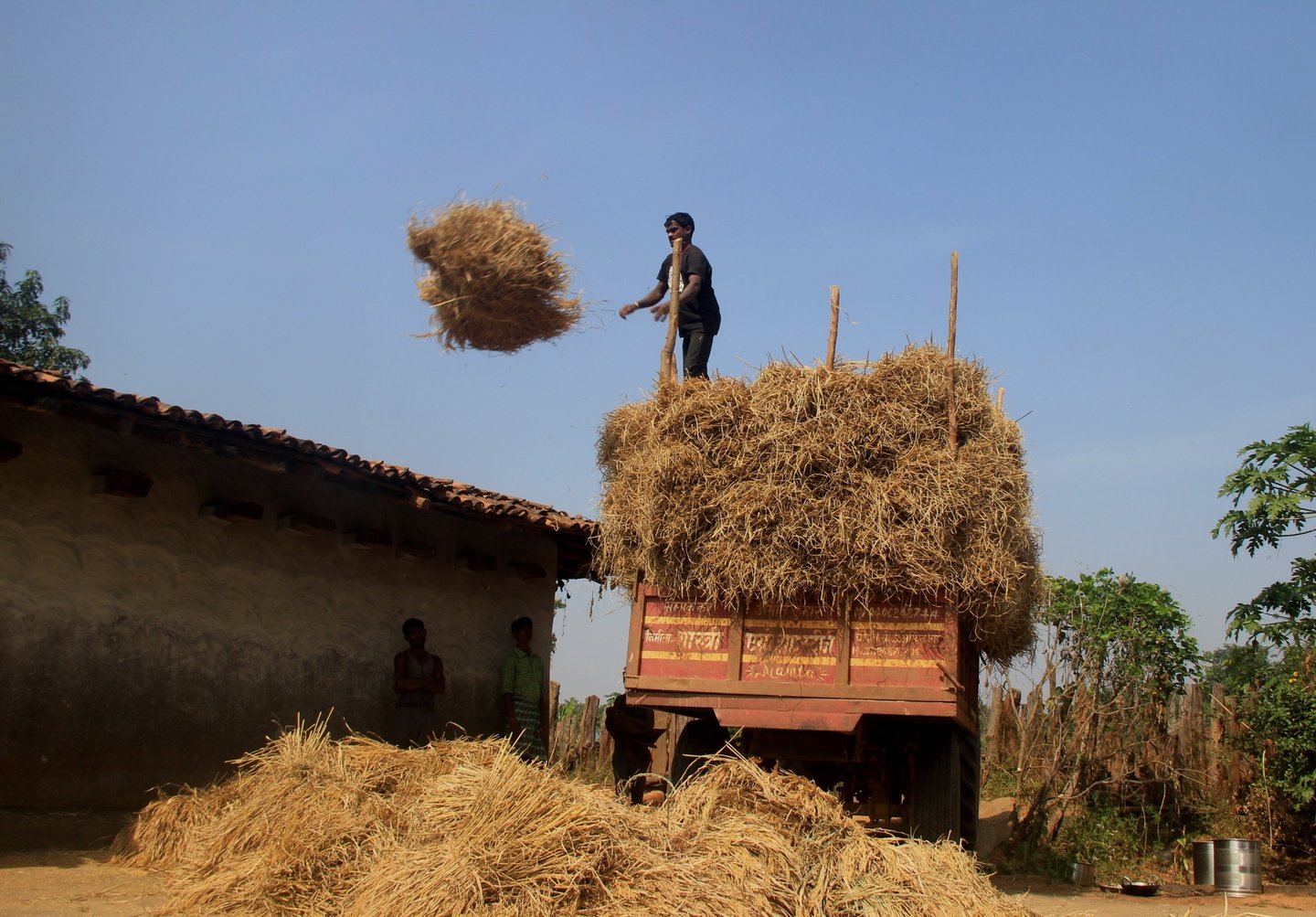 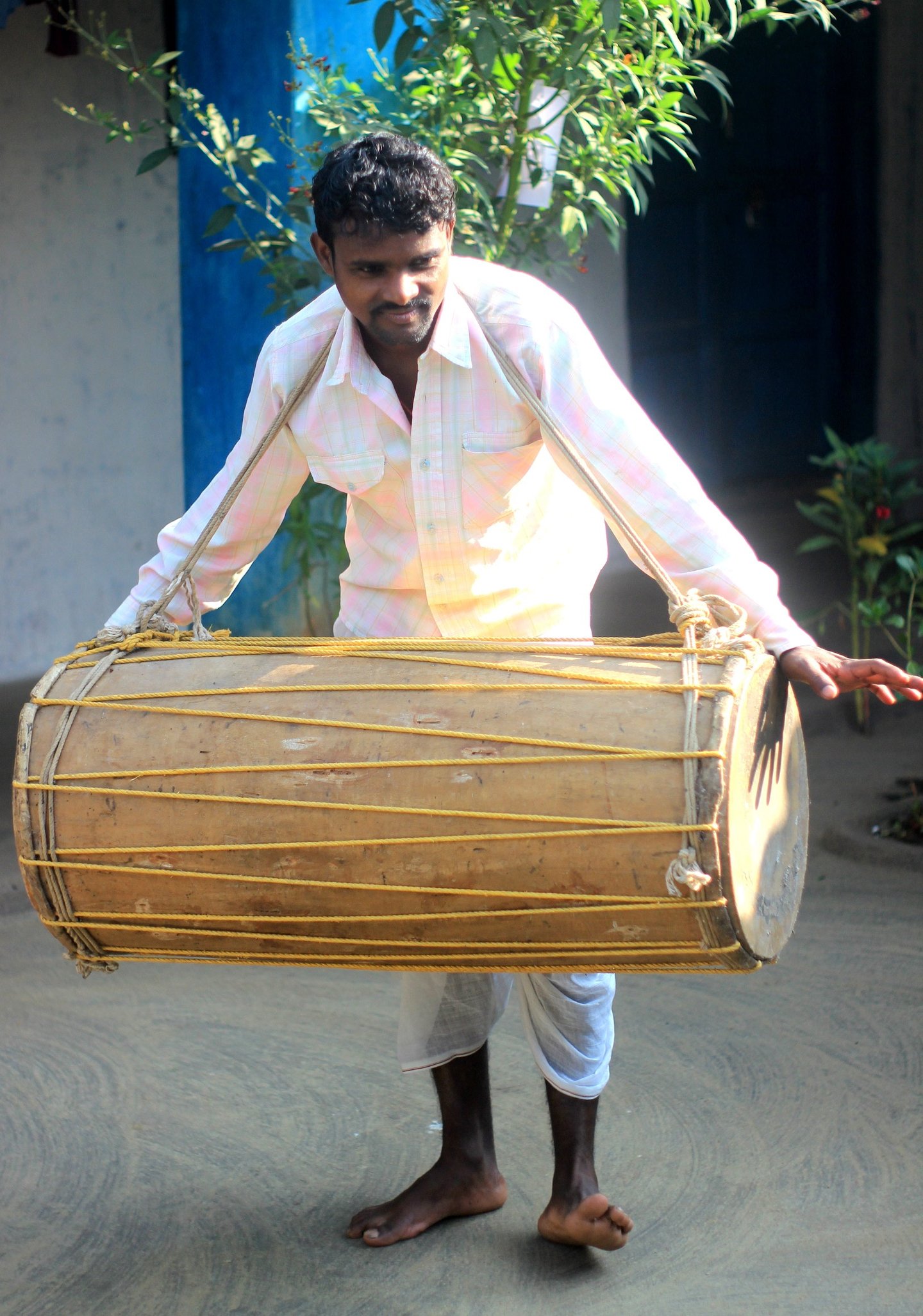 Salhi villager Ramlal Singh plays his Gond community’s traditional drum – an instrument he fashioned out of goat skin, and bijaa and khamaar wood from the forests 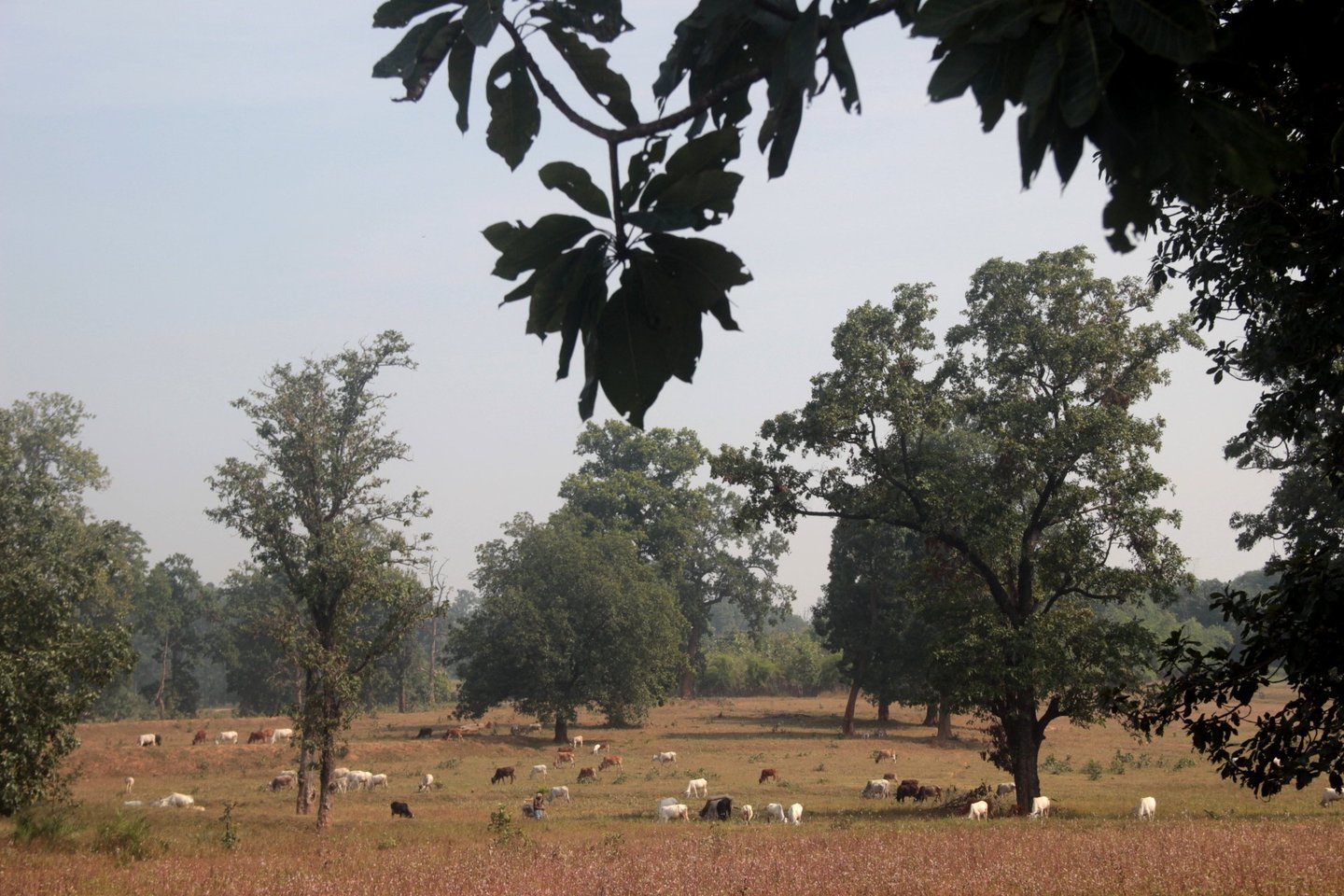 The forests are interspersed with paddy fields – the primary harvest and source of food security for locals – as well as grazing commons, critical for their livestock. 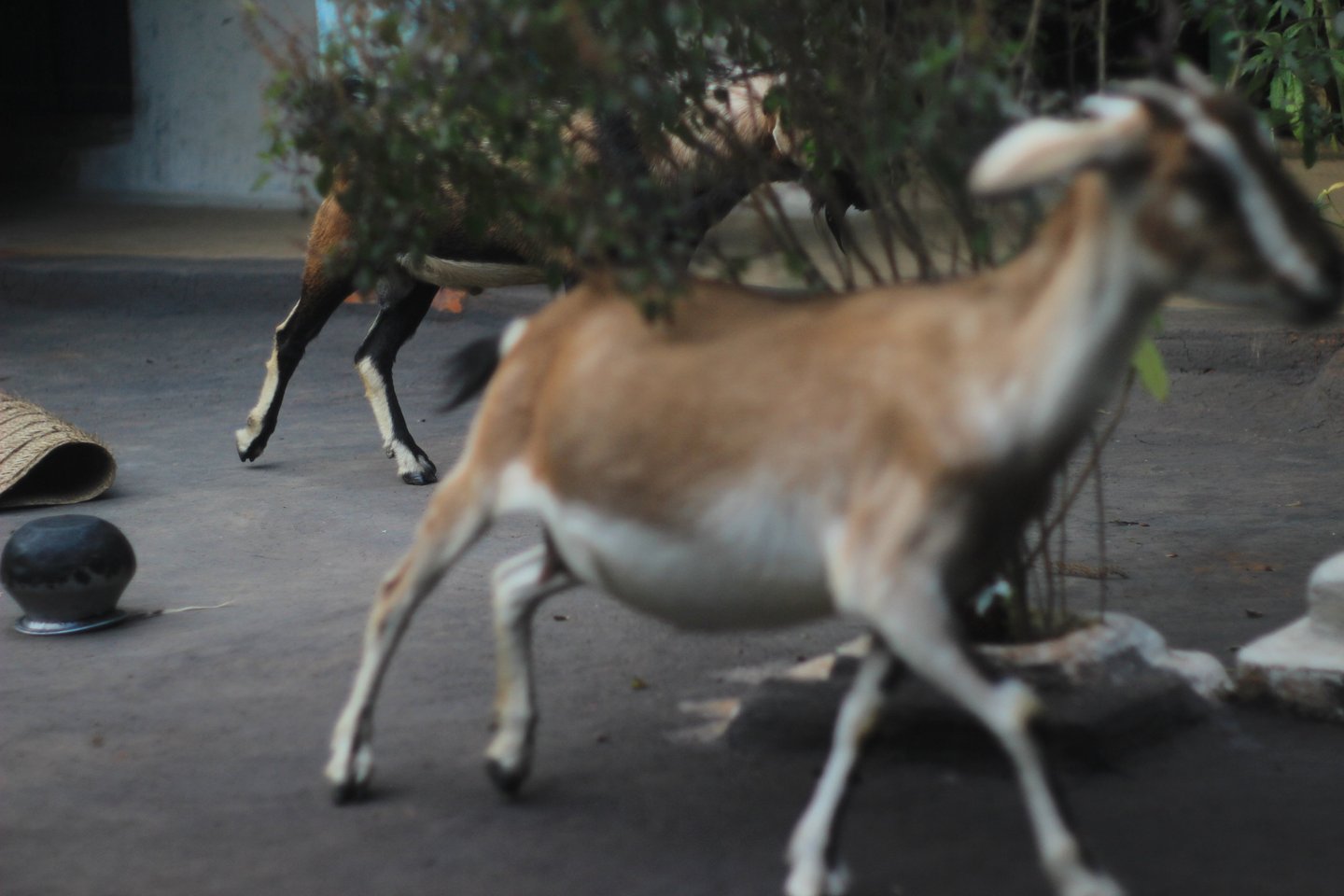 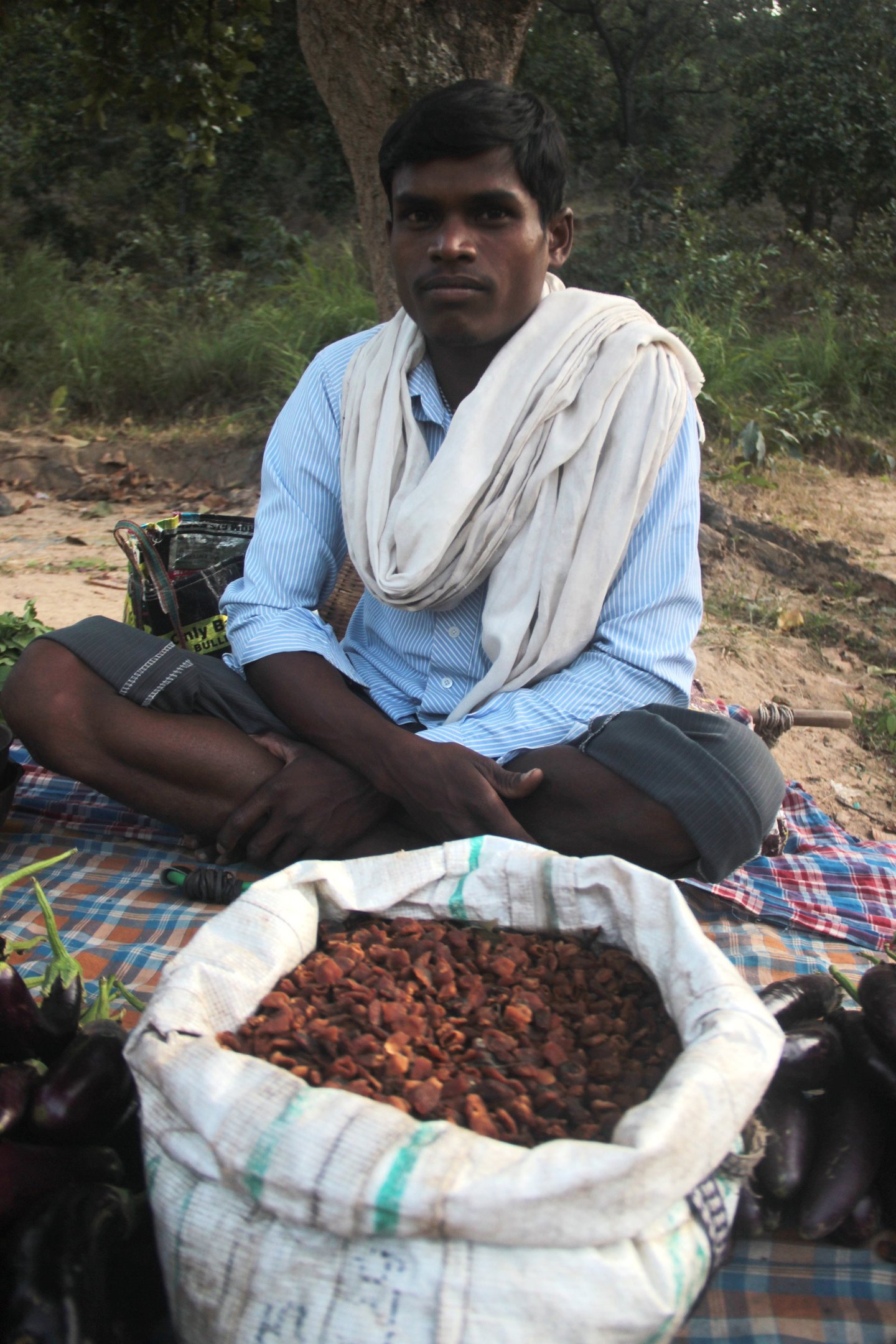 Forest produce is a source of year-round food and income for local residents. Mahaa Singh brings a sack of mahua to sell at the weekly village haat (market) 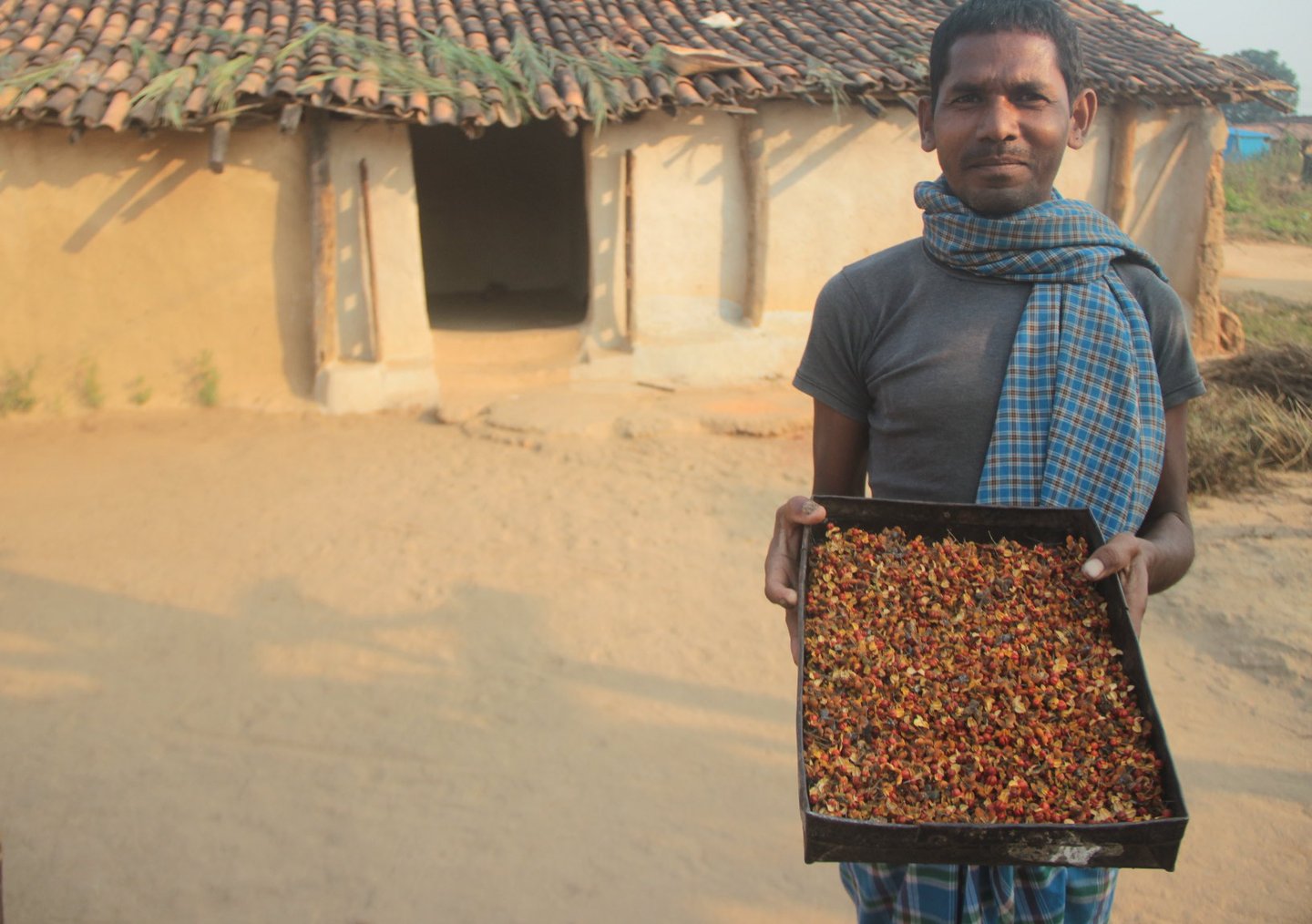 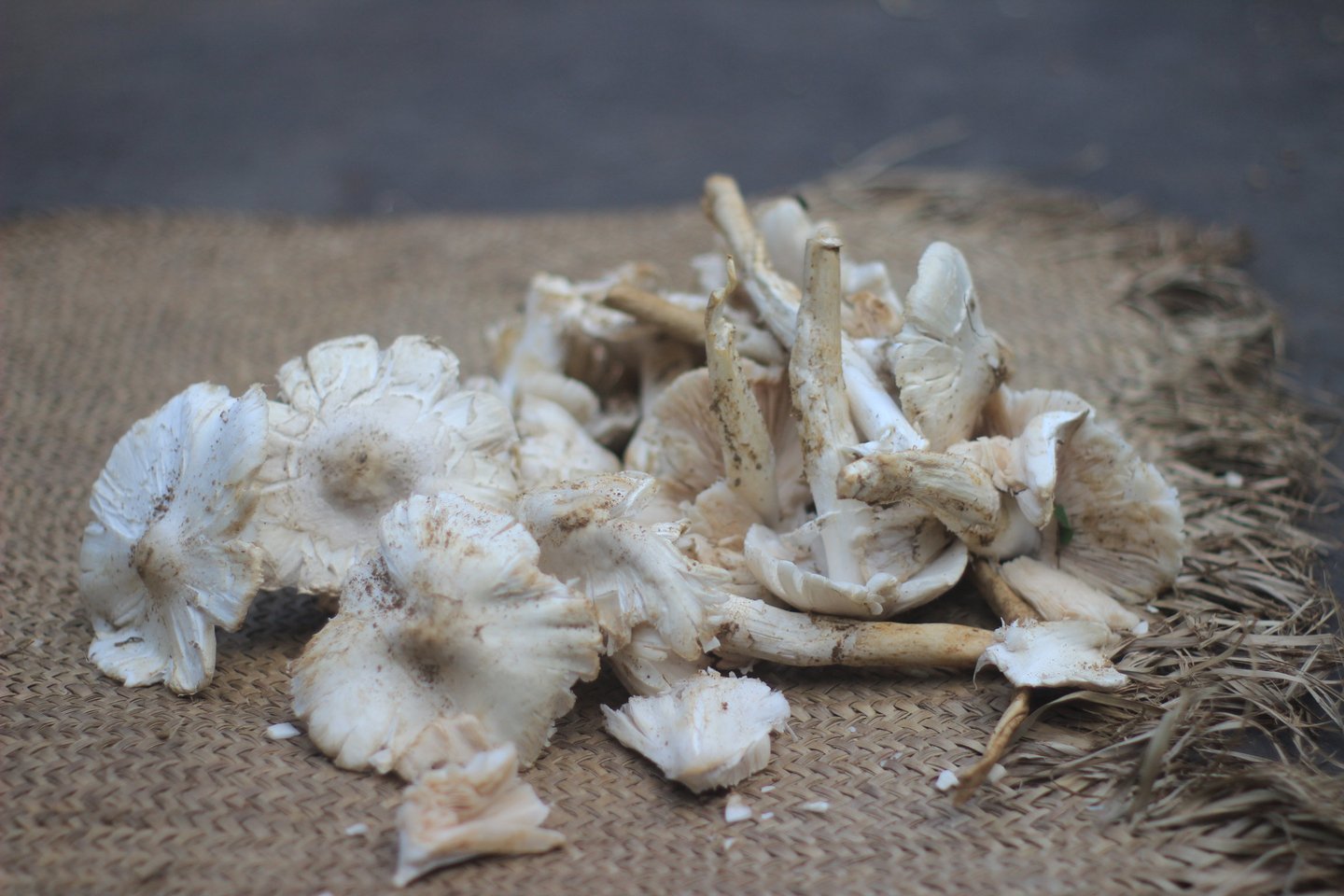 Villager Phulbai collects a batch of khunkdi , or mushrooms for the night’s dinner 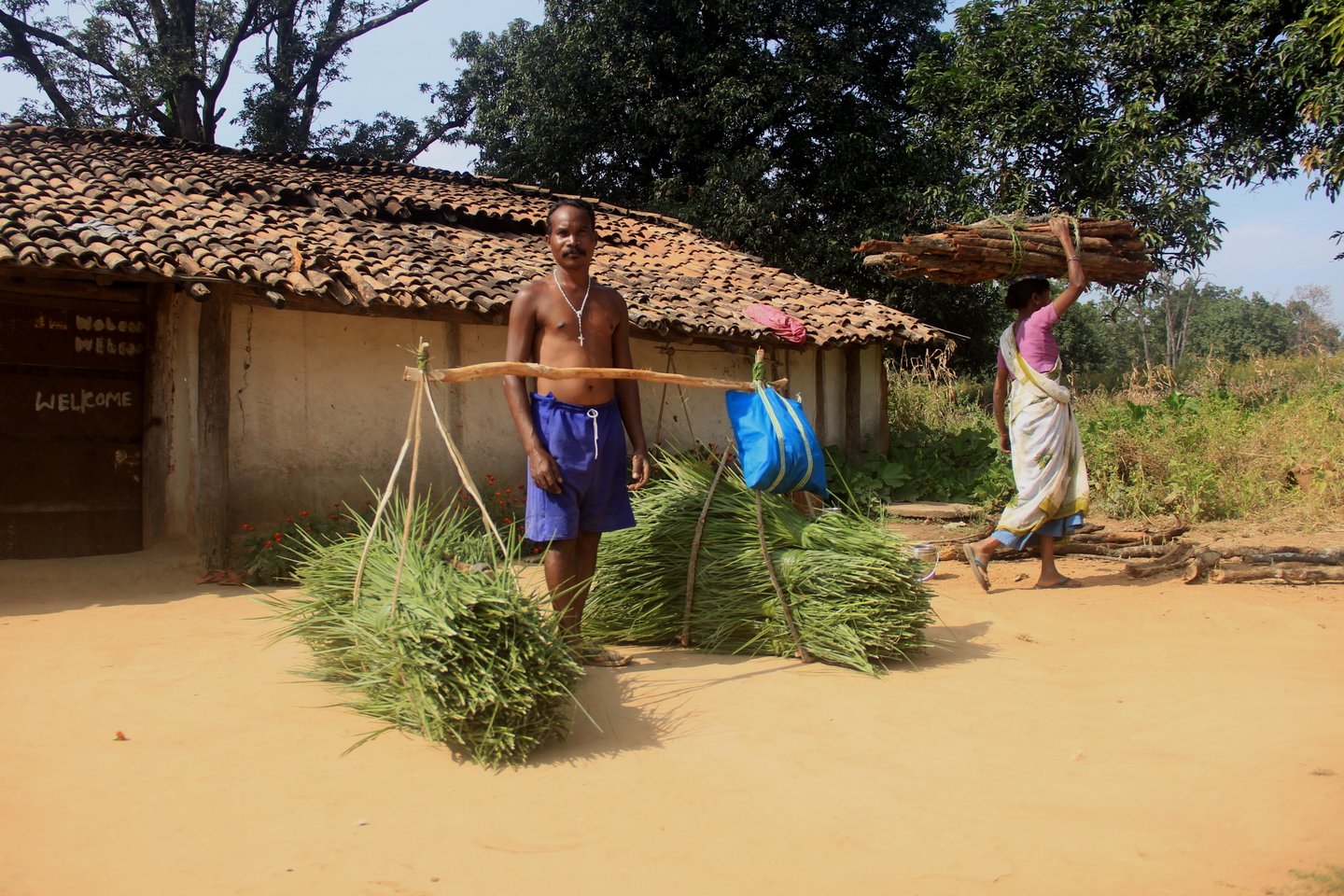 The Hasdeo forests are a source of daily essentials for local communities, including firewood and grass 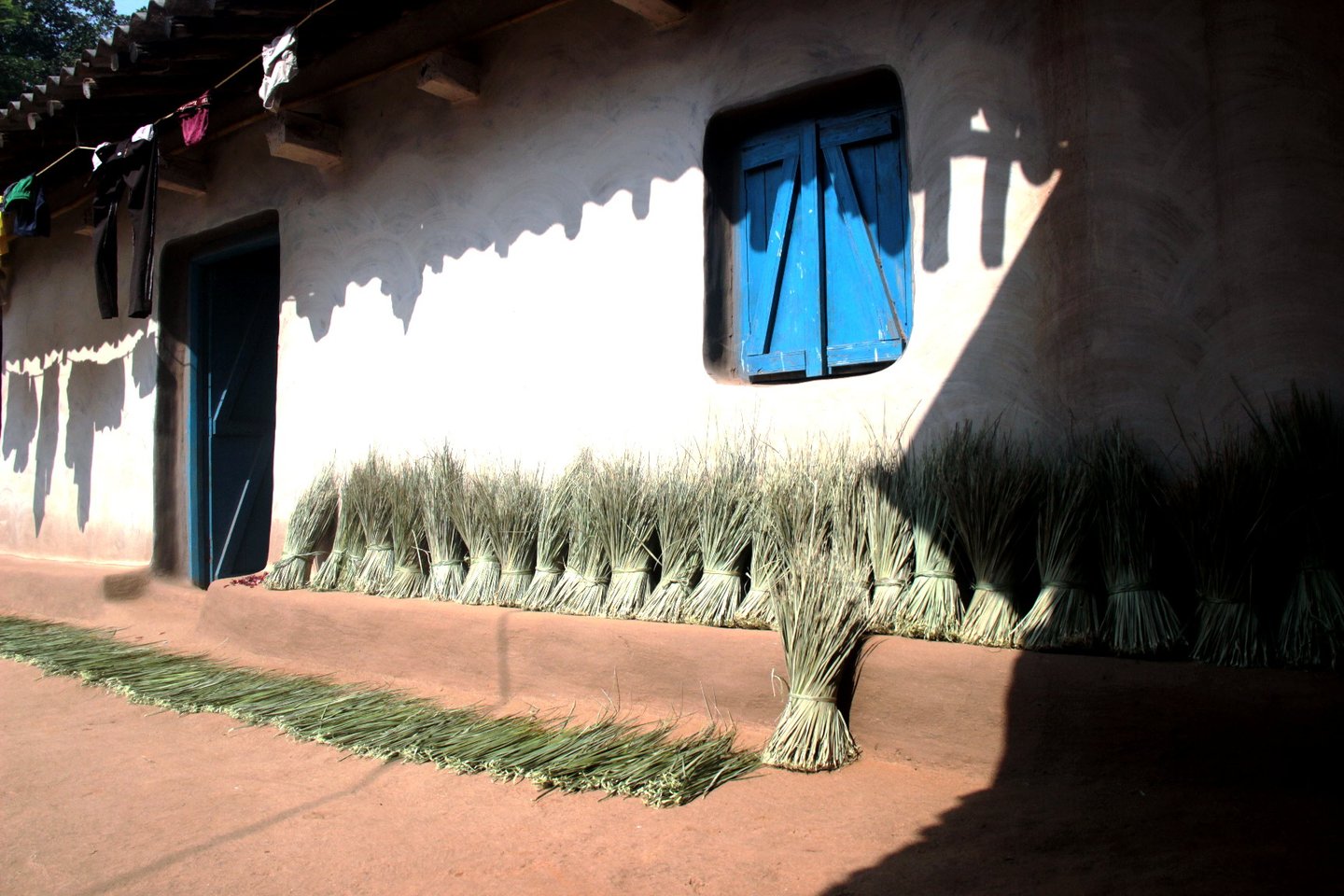 The forests have more than 30 different species of grass, and villagers fashion a range of products from them, including brooms, ropes and mats 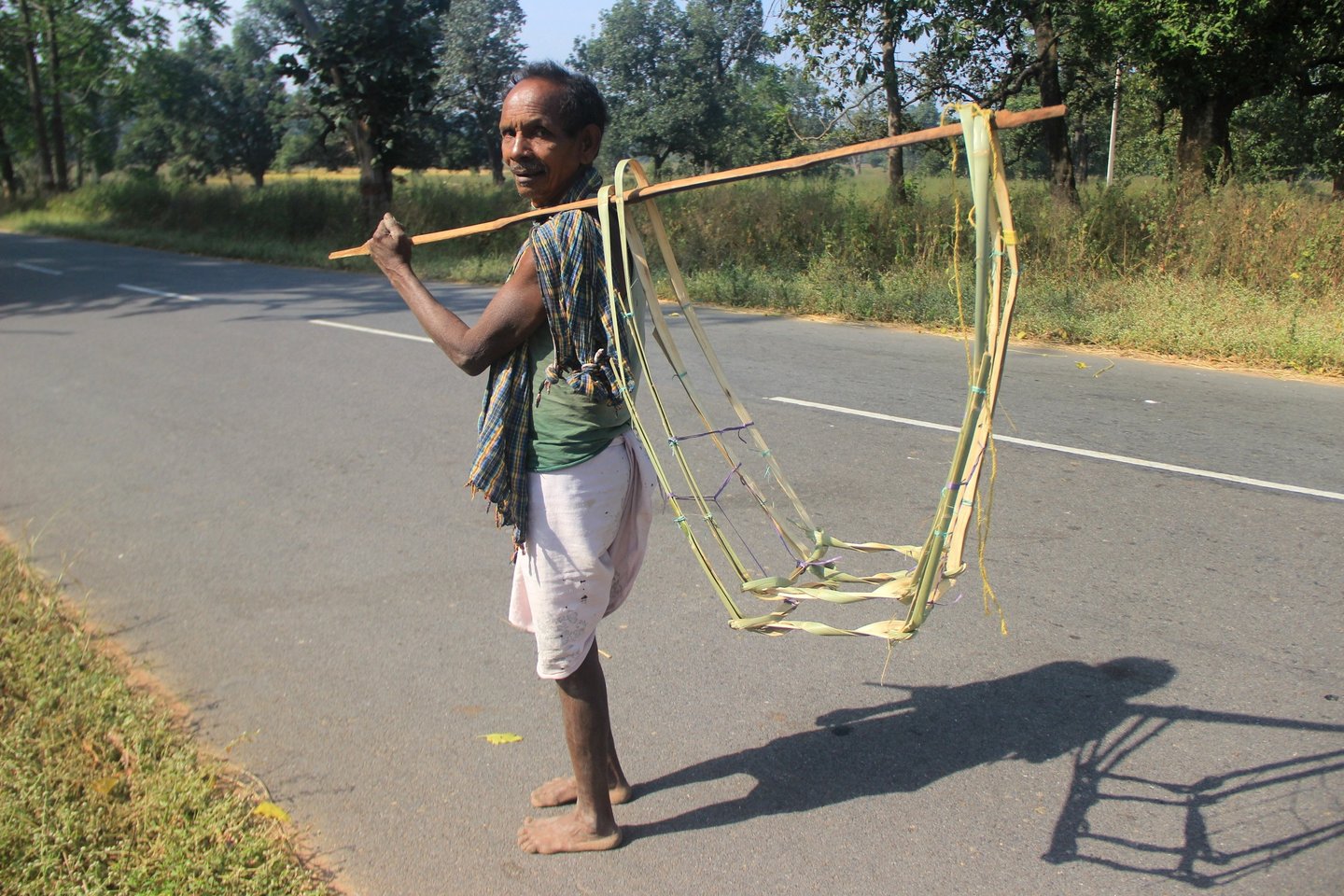 A farmer fashions a paddy holder out of bamboo 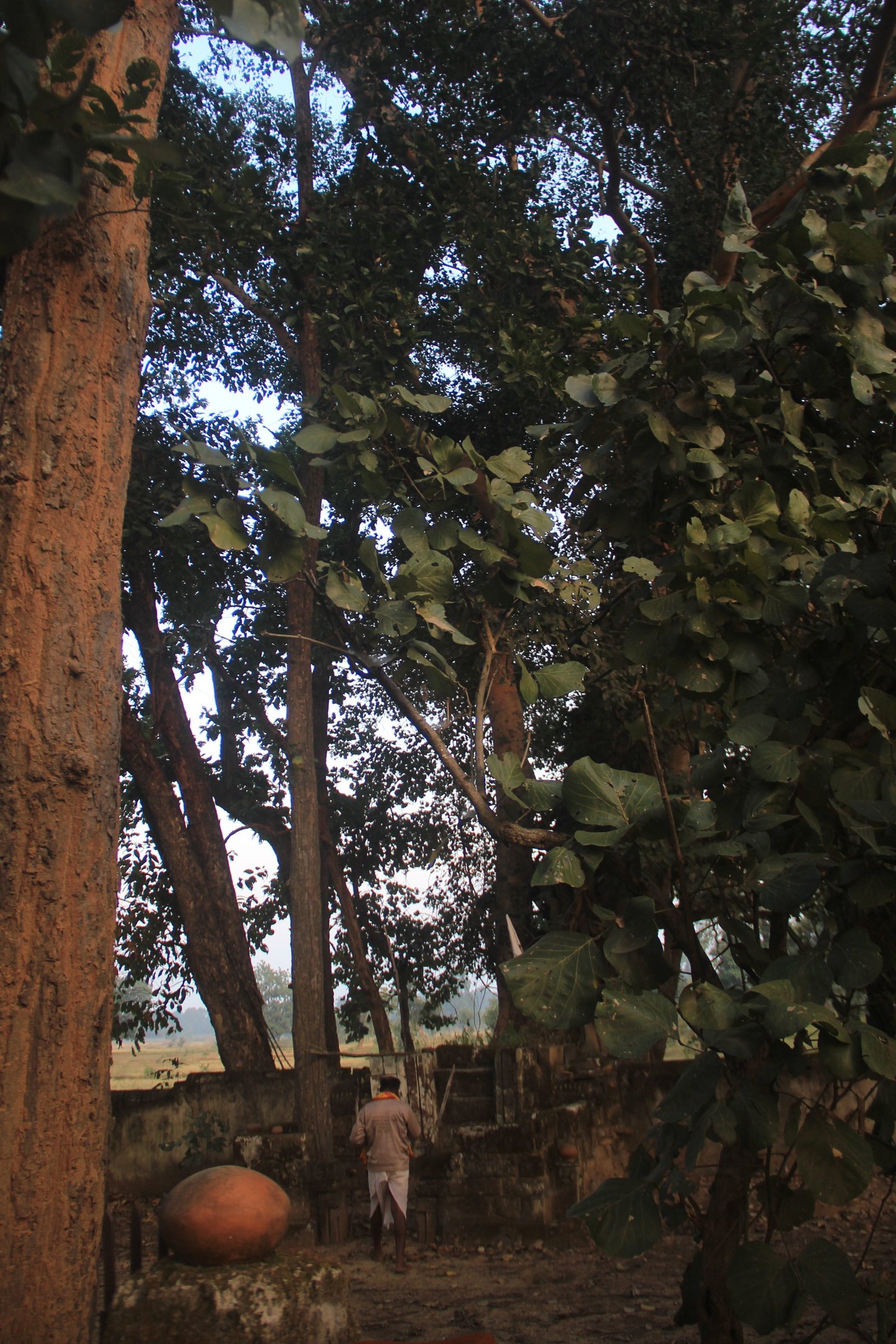 Holy sites or deyurs in the villages are marked by a collection of trees – here, a villager and priest prays at one such sacred grove