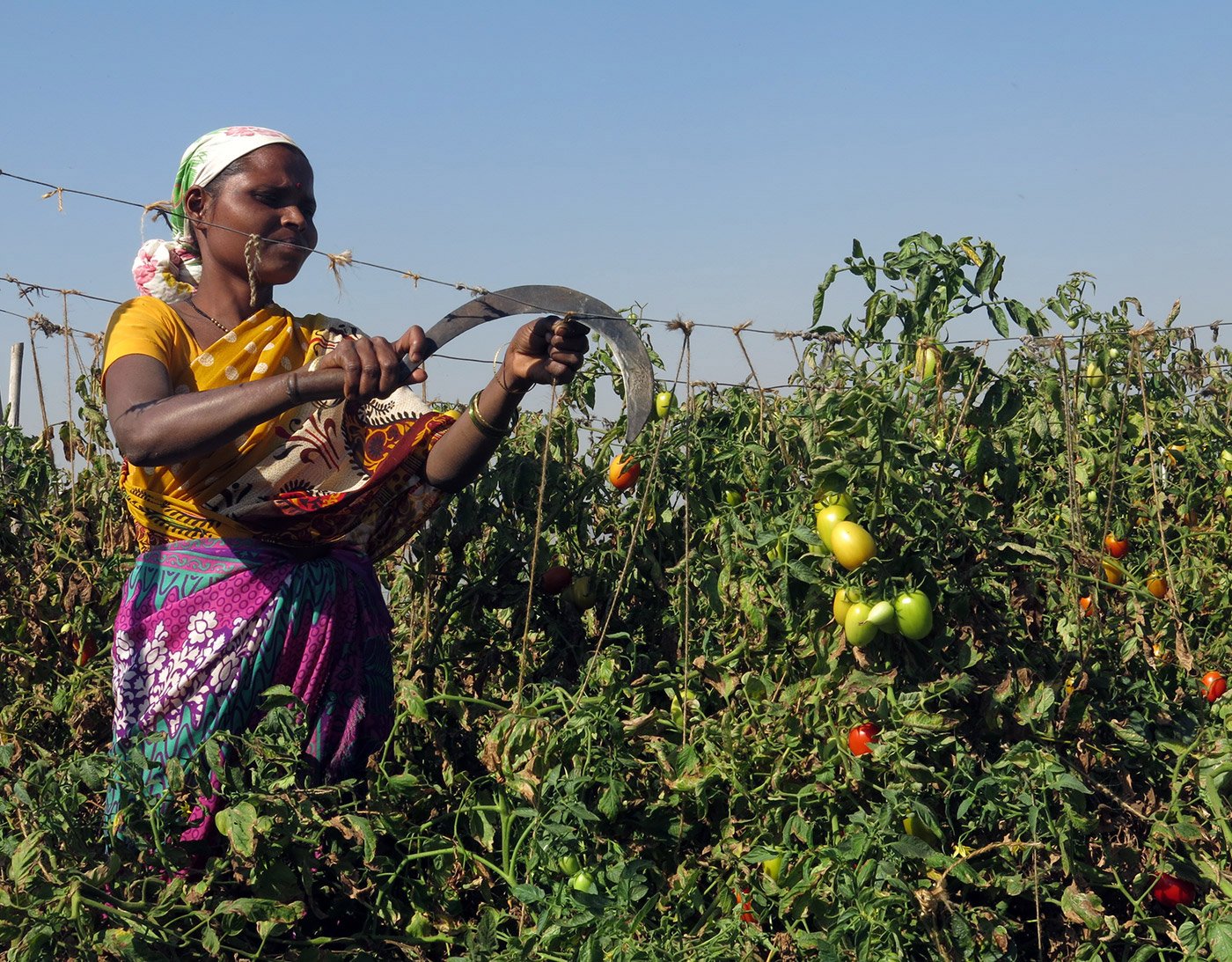 Notebandi takes the sauce out of Nashik’s tomatoes

Farmers in Maharashtra’s Nashik district – where one in every four tomatoes in India comes from – are destroying standing crops on a scale never seen before, following persistent rock-bottom prices since the November 8 demonetisation

On Christmas morning, barely 24 hours after Prime Minister Narendra Modi laid the foundation of the Rs. 3,600 crore Shivaji statue in Mumbai, Yashwant and Hirabai Bendkule were slashing and uprooting the tomato vines on their farm in Dhondegaon village of Maharashtra’s Nashik district, just 200 kilometres away. “Since over a month, tomato prices have collapsed. Even leaving the crop standing means a loss for us,” Yashwant muttered, explaining why the Adivasi couple was destroying a perfectly good crop, in which they had invested over Rs. 20,000 and family labour. They will sow wheat in the cleared land. “At least we will  have food to eat in the summer,” Hirabai said.

With the cash crunch following Modi’s November 8 demonetisation announcement, already low tomato prices tanked. The prices at the Girnare mandi , 20 kilometres from Nashik city, now range from 50 paise to Rs. 2 per kilogram. So low that farmers cannot even recover the cost of harvesting and transporting their produce. Retail prices hover between Rs. 6-10 a kilogram. Across Nashik, a key horticultural district of India, frustrated farmers are uprooting crops, dumping produce, and allowing cattle to graze in vegetable fields, in which they had invested anywhere between Rs. 30,000 and Rs.1.5 lakhs per acre this monsoon.

Good rates last year – ranging from Rs. 300 to Rs. 750 per crate (20 kilos) – saw more farmers sowing tomato with high hopes in monsoon 2016. By October, they realised that with good weather, no major pest attacks, and the number of tomato growers increasing, there would be an abundant harvest. So, rates might be favourable, but would not match those of the previous year. Several farmers said rates were decent over Dussehra and just break-even until Diwali, at about Rs. 130 per crate.

However, with the outlawing of 500 and 1,000 rupee notes, harvest arrivals met a severe paucity of currency, driving down purchases and prices. “Rates fell by November 11, and have never recovered,” said Nitin Gaikar a Girnare-based farmer. They’ve fallen to a range of Rs. 10-40 a crate since then. Gaikar points out that cash fuels the entire rural agricultural economy, including transactions among farmers, traders, transporters, retailers of farm inputs and labourers. 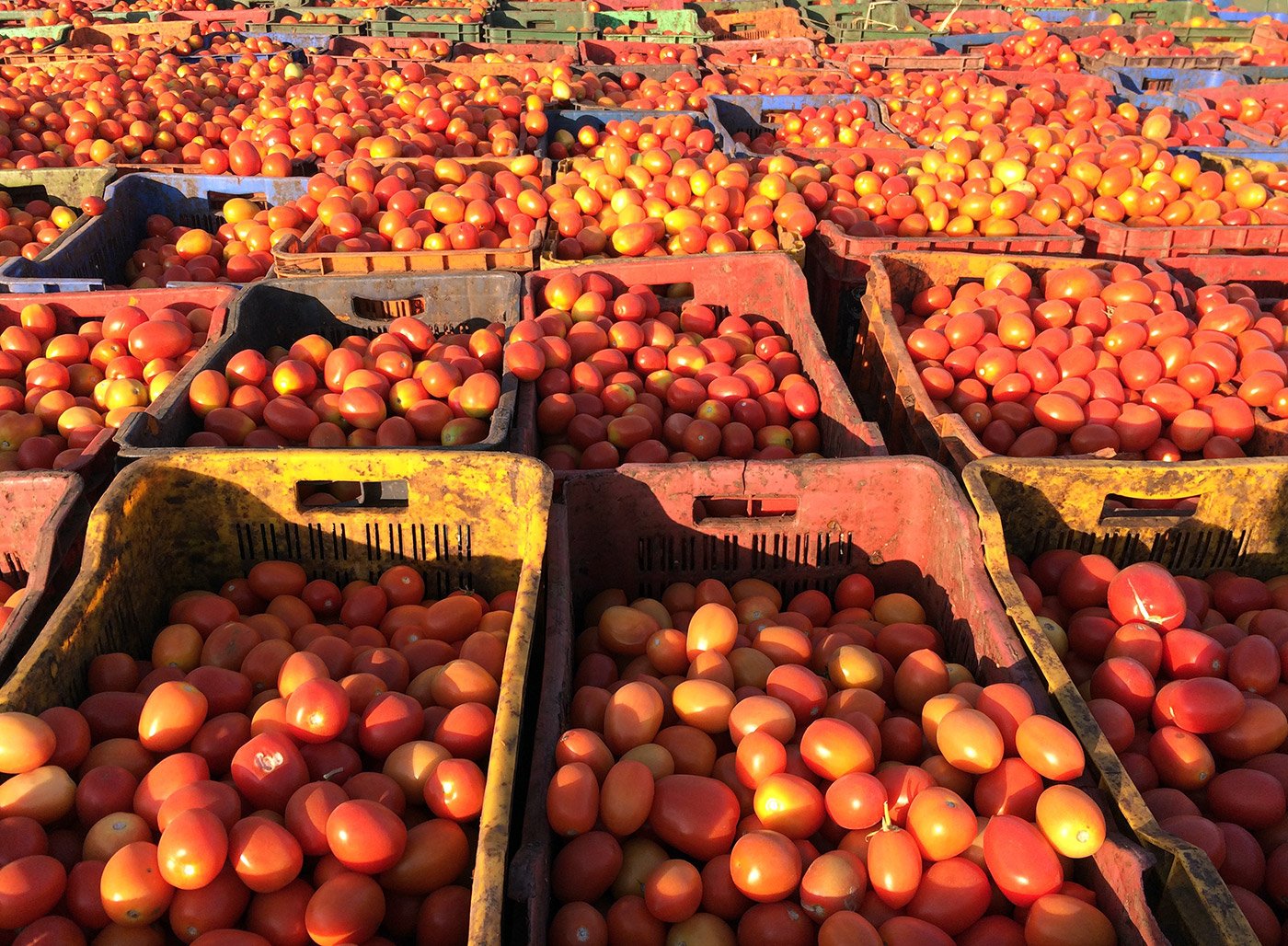 With the outlawing of 500 and 1,000 rupee notes, abundant harvest arrivals met a severe paucity of currency, driving down purchases and prices

District authorities don’t appear too worried. “It's a free market, and we cannot control it day in, day out,” said Nashik collector B. Radhakrishnan.  "Prices are a purely market-driven activity."

Rural households, though, are deeply concerned. “I spent Rs. 2 lakhs on my two acre tomato plot, but have not recovered even Rs. 30,000 yet”, said Ganesh Bobde. “There are hardly any buyers, which is why I have let my cows graze on the tomato crops,” said Somnath Thete, as we walked through his bountiful plot, with three cows grazing on the vines. 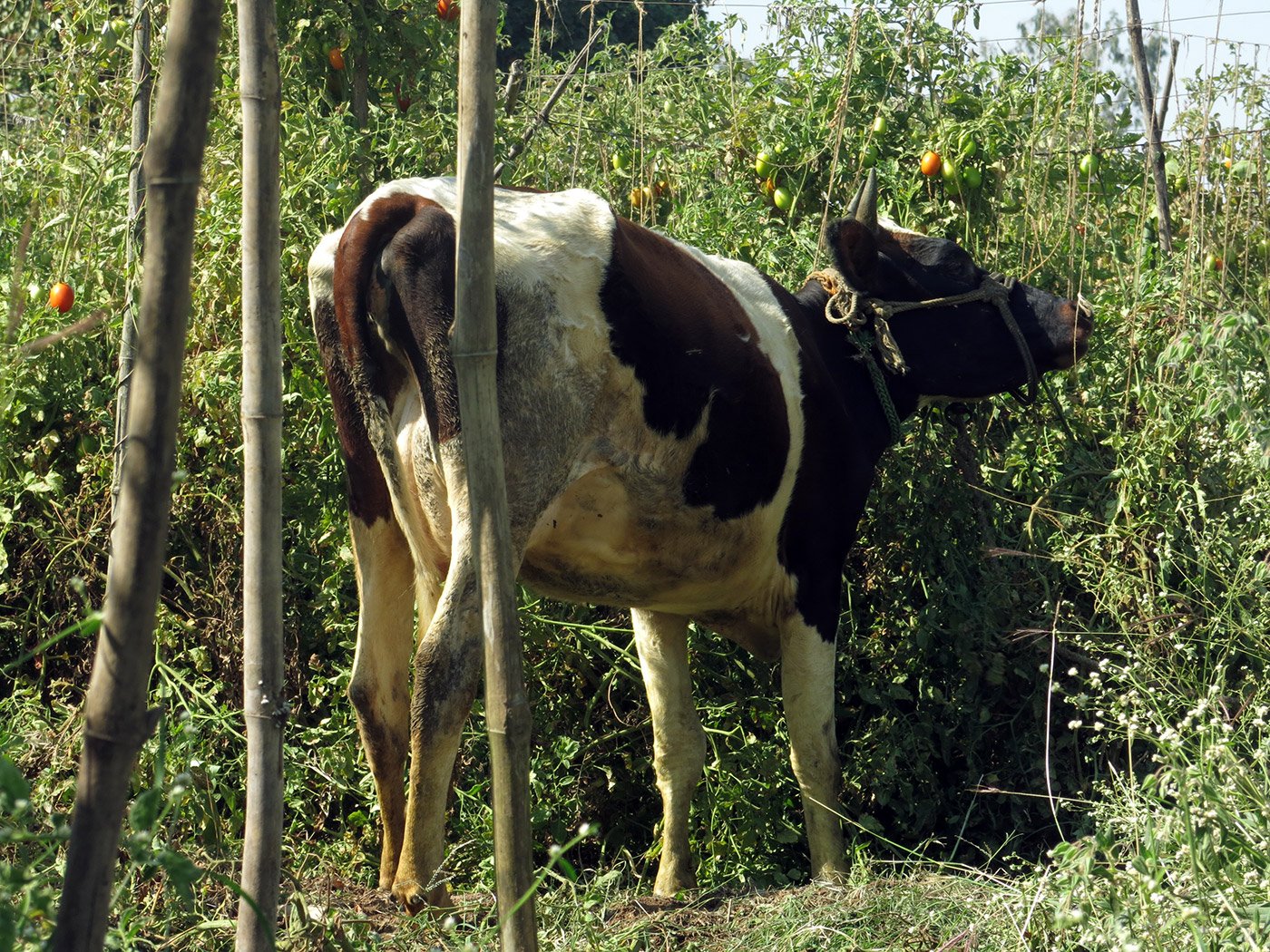 With hardly any buyers, Somnath Thete has let his cows graze on the tomato crops

A visibly agitated Yogesh Gaikar, who planted tomato across his 10-acre farm, said, “I have sold 2,000 crates so far, most of them at a loss. It is due to this note ka lafdaa [mess]. Just when we were about to make some money, Modi has kicked us.”

Roughly  every fourth tomato sold across the country this kharif season came from Nashik. Government  of India data indicate that 24 per cent of tomatoes sold by weight between September 1, 2016 and January 2, 2017, were from this district. (That is, 3.4 lakh of 14.3 lakh tons).

Resigned to volatile prices and income insecurity for years, neither distress sales nor dumping of produce is new for farmers.  But the region has never seen destruction of a standing crop on this scale, says Dnyaneshwar Ugale, the Nashik-based correspondent for the Marathi agrarian daily Agrowon . “Farmers’ production costs are on average Rs. 90 per crate. If all they are getting is Rs. 15-40, imagine the kind of losses they are incurring.”

Ugale’s calculation, based on arrivals in the five mandis (agricultural marketyards) of Nashik district, pegs farmers’ losses at around Rs.100 crores so far.  And the official reckoning? Bhaskar Rahane, agriculture supervisor at the District Superintendent of Agriculture Office, Nashik, said their estimates of tomato acreage and production in the district ended at 2011-12. "There is no system to capture farmers’ losses. Farmers should keep track of their incomes themselves, the way they track other expenses,” he said.

Watch video: 'The current rate for tomato does not even cover my cost of harvesting the produce', says Adivasi farmer Dattu Bendkule

The dusty maidan that is Girnare mandi , a leading tomato hub, is unusually subdued for this time of the year. The approach roads, usually jammed with tractors laden with tomatoes, are ominously clear. Most  of the traders from outside Maharashtra who annually set camp here from October to December, and purchase and transport tomatoes all across India, left early.

Among them was Rahat Jaan, now back in his home in Amroha in Uttar Pradesh. “I have an ICICI bank account in Nashik city,” he told us on phone. “But they gave only Rs. 50,000 over eight days. I need cash of Rs.1-3 lakh for daily business,” Jaan added. “As long as old notes were being accepted by farmers and petrol pumps, we managed somewhat. But for the shortage of notes, I would have purchased tomatoes for another 15 days.”

The  upcountry traders gone, the mandi currently sees only local buyers from places like Vashi and Virar near Mumbai. They too are struggling with low prices and the cash crunch. We watched Pimpalgaon-based trader Kailash Salve buy 100 crates of tomato for Rs. 4,000. “I don’t have more currency,” he said, “so I could not buy more.” He told us he was exploring buyers in Surat in Gujarat.

“Last year, around this time, we had done business in tomatoes of Rs. 50 lakhs and earned Rs. 3 lakhs,” Salve said. “This year we have only bought Rs. 10 lakhs of produce so far, and incurred losses on it.” Two days later, he sold the tomatoes to a Surat buyer at a loss.

Over the past 15 years, tomato has become this region’s aspirational crop, after grapes. However small the landholding, as long as they have some access to capital and water, Adivasi and Maratha farmers (such as Bendkule and Gaikar, respectively) look to plant tomato. Consequently, the tomato market’s collapse is ruinous. Some traders like Jaan argue that overproduction, too, has pushed rates lower. Farmers say this might be the case, but point out that they are getting rock-bottom rates even for vegetables, which were not planted as widely.

Left: Yogesh Gaikar said, 'Just when we were about to make some money, Modi has kicked us'. Right: For many like Yashwant Bendkule in Nashik, even leaving the crop standing would mean a loss

“Look at cauliflower, brinjal, coriander, bottlegourd – whose price has not collapsed in the past weeks?” asked Nana Achari, rhetorically. An Adivasi small farmer from Dhondegaon village, Achari took 20 crates of brinjal to the mandi in Nashik city 20 days ago, but returned without finding a buyer. The next day he sold the entire consignment for Rs. 500 at the Vashi mandi , leaving him with just Rs. 30, after deducting transportation costs. Another farmer, Keru Kasbe from Vadgaon village, told us he sold 700 kilos of brinjal at Vashi eight  days ago. He made Rs. 200, net.

Some traders are paying farmers by cheque. But diesel has to be purchased, labourers paid, fertilisers bought. Neither farmers nor traders here have the time to deposit cheques, and then stand in long queues to withdraw cash. That too, just Rs. 2,000 at a time, usually in one new note. Besides, farmers don’t trust cheques. Vijay Kasbe, forced to take one since his trader did not have currency, told us that he would be helpless if it bounced. 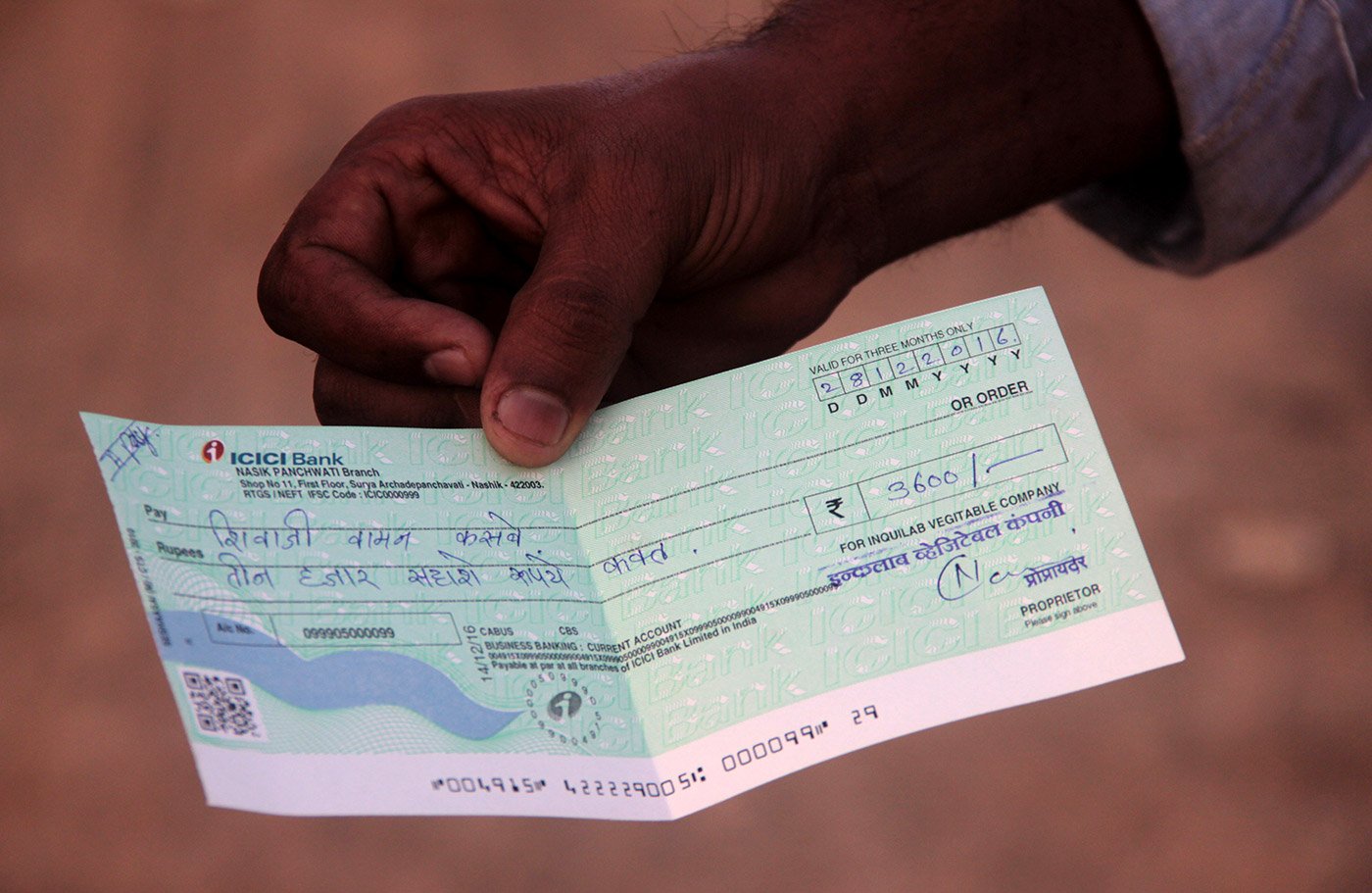 A cheque in the name of Vijay Kasbe's father – he was forced to take one since his trader did not have currency, but would be helpless if it bounced

Crashing prices and the currency crunch have had cascading consequences. Adivasi labourers are not finding enough work, and the 2,000 rupee note adds insult to injury. “To get change, the shopkeeper wants us to spend over Rs. 1,100. The petrol pump owner says fill for at least Rs. 300,” said Rajaram Bendkule. “Bring all that petrol home, let us drink it,” said his aunt darkly.

Retailers of farm inputs are deeply anxious. “My whole business depends on that,” said Aba Kadam, retailer, gesturing towards the mandi . “I am hit on both counts. Since farmers are destroying their standing crop, they are not buying inputs from me now. And since they are not making money in sales, I can’t recover the credit I had advanced to them in the growing season.”

On December 30, the 50-day window Modi had asked the country for, when he announced demonetisation, ended. On new year's eve, expectation levels matched the distress. Modi should deposit money in our accounts to compensate for the losses we are incurring, said one farmer; karza maafi (loan waiver), said another; lower interest rates for crop loans, demanded a third. However, Modi did not address farm distress and losses in his December 31 speech to the nation.

All eyes are now on the grape crop which will be harvested, starting end-January. Good rates will see grape farmers earn some profits. Retailers like Kadam will recover some of their advances. Traders, however, are not optimistic. Jaan says unless the currency scarcity ends soon, he will be unable to purchase from farmers. A gloomy Salve believes grape prices will also tank.

Aniket Aga is an anthropologist. He teaches Environmental Studies at Ashoka University, Sonepat.

Other stories by Aniket Aga