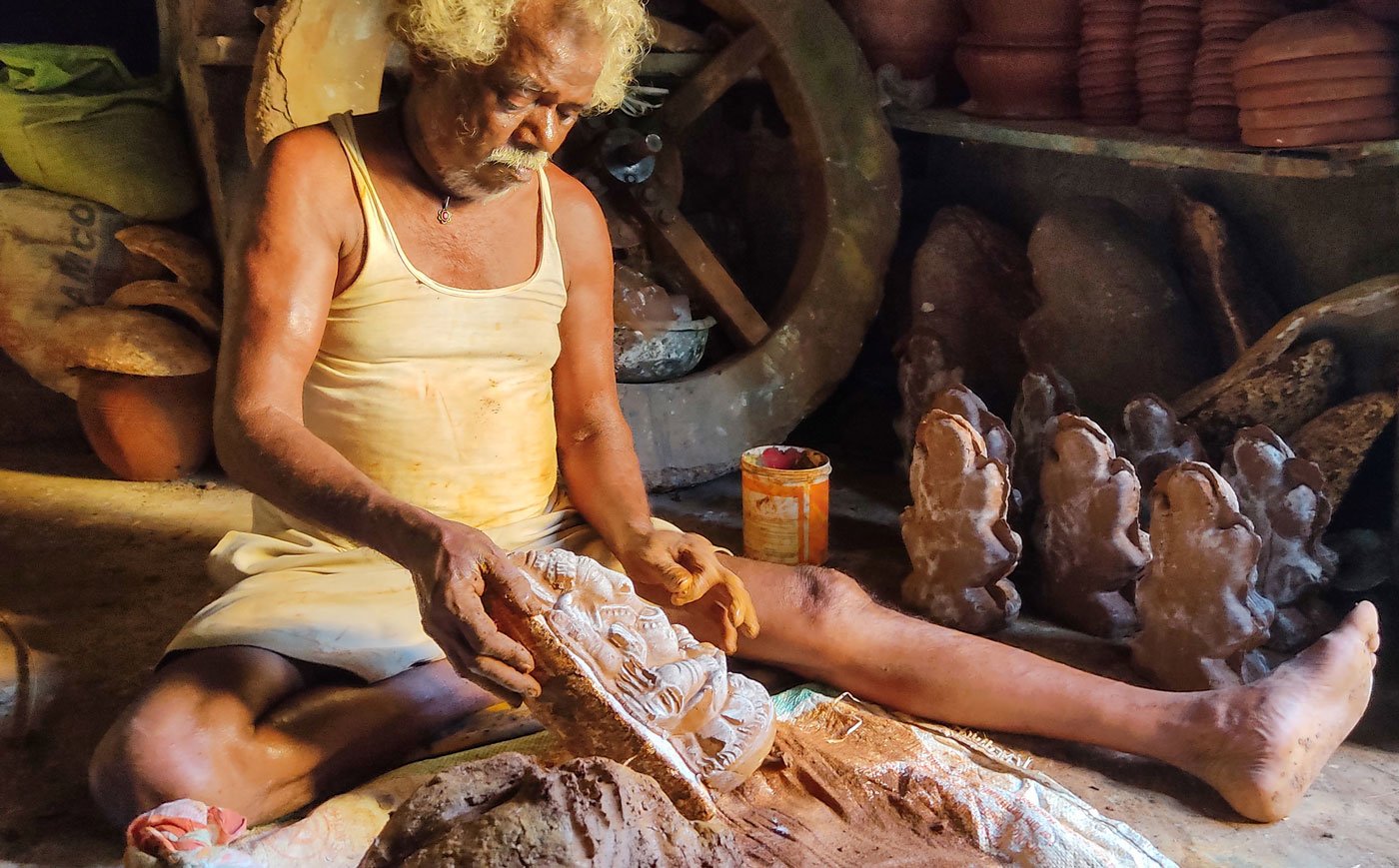 The artisans in this AP city earn the most during the festival season – starting with Ganesh Chaturthi this week. But they have not received a single bulk order for Ganesh idols and other products so far this year

“Do you think people will buy Ganesha idols this year?” asks U. Gauri Shankar, a resident of Kummari Veedhi (potters’ street) in Visakhapatnam. “We put our faith in god and create these idols every year. And by His grace, we have made at least meagre profits,” he says. “But this year, there seems to be no god, only lockdown and viruses.”

Shankar, 63, along with his son, Veerabadhra, 42, and daughter-in-law Madhavi, 36, start making Ganesha idols in April every year, at their home in this city in Andhra Pradesh. But due to the pandemic, they could only begin in mid-June this year.

Normally, they say, they make Rs. 20,000 to Rs. 23,000 every month between July and October (the festival season for potters), delivering on orders linked to Vinayak Chaturthi and Diwali. This year, barely 48 hours before Vinayak (Ganesh) Chaturthi, they had not received a single bulk order for idols.

Barely 15 years ago, the potters’ street buzzed with the activity of 30 Kummara families engaged in this livelihood. Now there are just four. And these families have seen their situation worsen through the lockdown that began in the last week of March.

“We receive bulk orders from traders who distribute idols, but this year we have got none,” says Madhavi, who is from Srikakulam district of Andhra Pradesh. Her husband’s grandparents came here from a village now in Vizianagaram district. 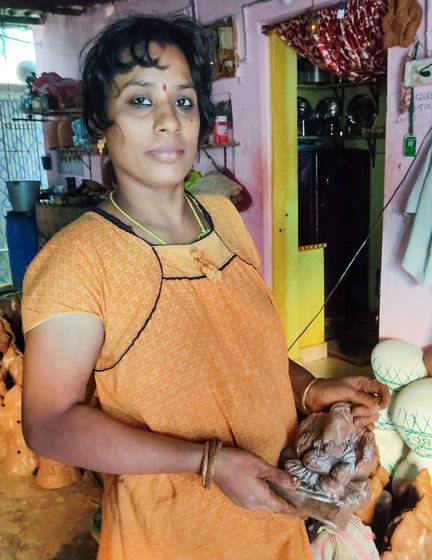 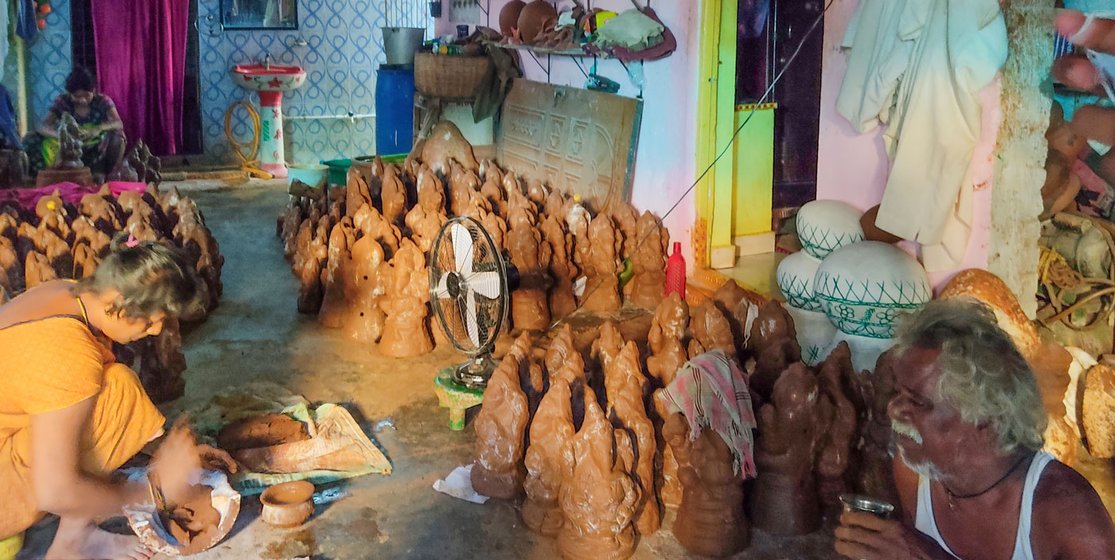 U. Gauri Shankar's family – including his daughter-in-law Madhavi – has not received a single bulk order for idols this Ganesh Chathurthi

The family together moulds up to 100 such idols a day. “Of which maybe 60 to 70 come out perfectly well. Some break while painting,” Shankar says. Madhavi showed me a new idol whose arm had come off. “Broken idols cannot be fixed,” she says. “They are a symbol of our wasted efforts.” Outside their house are three large, broken, half-painted Durga idols too.

They also make a number of small items, including pots, ‘piggy banks', mud jars, cups and other clay curios. A variety of these are stacked unevenly on top of each other outside their house. Each piece is priced at Rs. 10 to Rs. 300. “There aren’t many who buy these nowadays. Everyone buys steel or copper items,” says Madhavi.

“The income from these is not more than Rs. 700-800 a month,” says Shankar. “We survive on the earnings from Ganesh Chaturthi and Diwali.” When that fails, they’re in deep trouble. 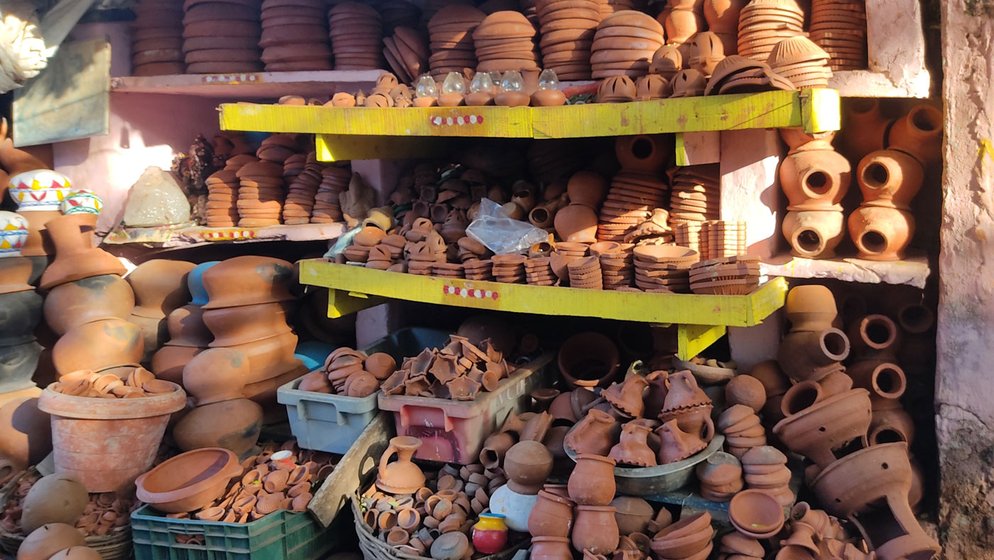 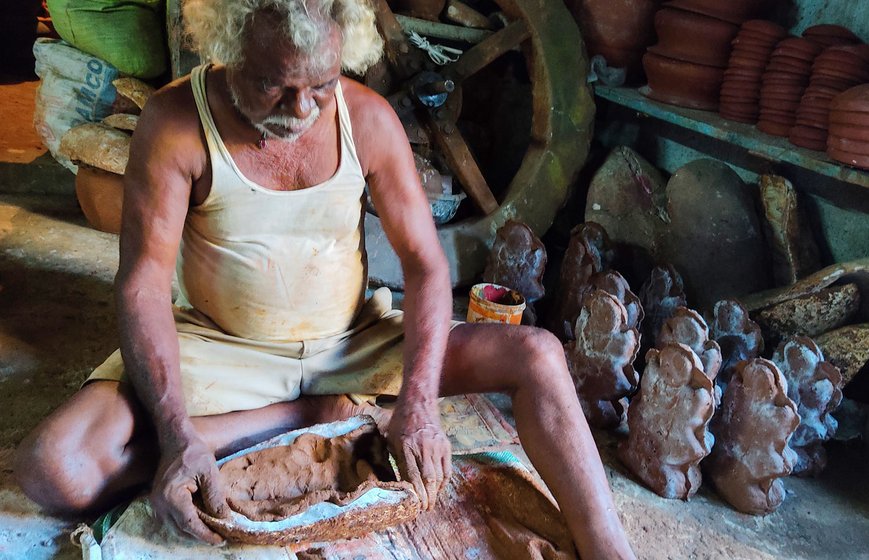 'We put our faith in god and create these idols every year', Shankar says. 'But this year, there seems to be no god, only lockdown and viruses'

Madhavi worries about the education of her two children. “Somehow, I feel these online classes won’t give them enough knowledge,” she tells me while kneading the clay. These past two months, the English-medium private school her kids attend has repeatedly demanded they pay the monthly fees despite its being shut during the lockdown. “But we couldn’t pay,” says Madhavi.

“We borrow money – around Rs. 70,000-80,000 – for my grandchildren’s education almost every year,” says Shankar. They mostly borrow from relatives or friends to avoid paying interest.

Shankar and his family also make bigger clay idols, mainly Ganeshas, up to 5-6 feet in height, and these are priced between Rs. 10,000 and Rs. 12,000 each. “However, the police told us not to place the big idols outdoors. And so we haven’t received orders for them either,” he says, smiling sadly. “It’s the big ones that fetch us good profits.”

Isolated from the main road, the potters’ street has received little attention and few visitors in recent years.

Until recently – when the larger locality it lies within was declared an active coronavirus containment zone. Then Shankar’s new visitors were the police. 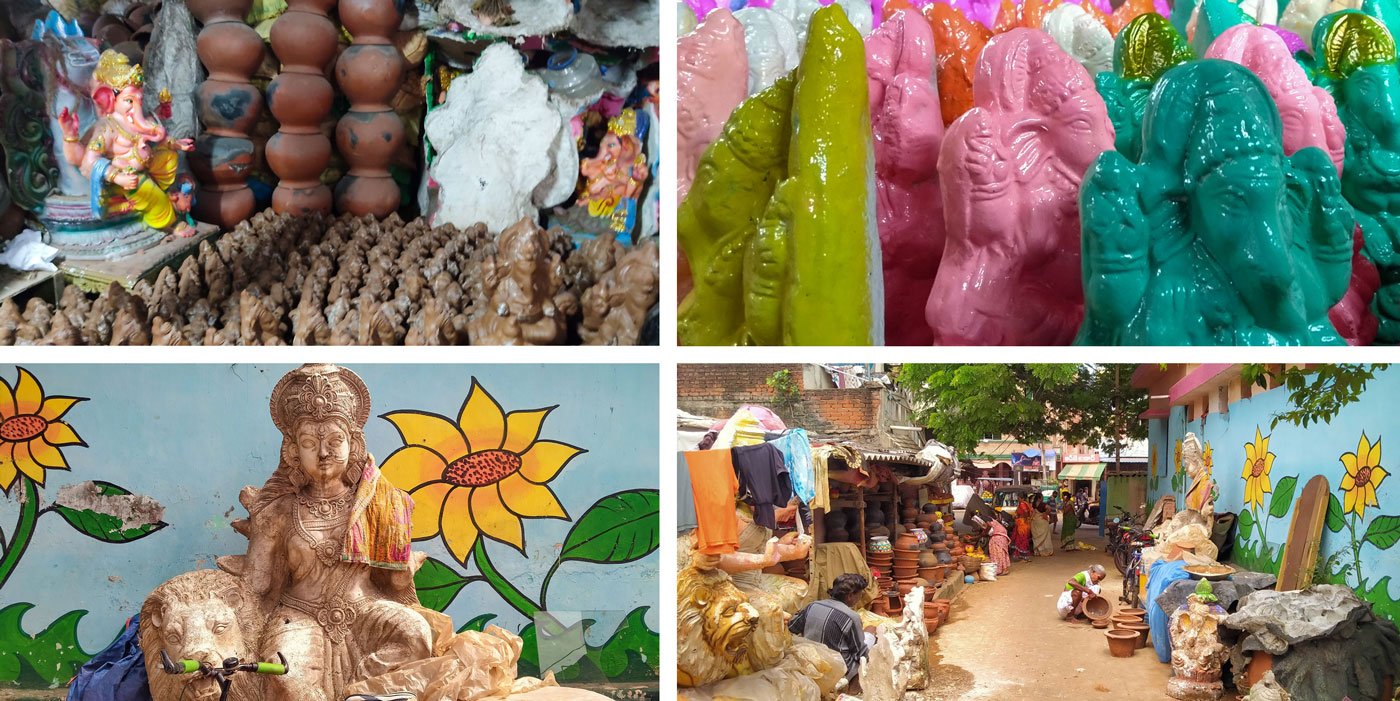 The potters in Kummari Veedhi make small and big Ganesha idols, and other items. But the four Kummara families in this lane – which had 30 potters' families 15 years ago – have seen their situation worsen through the lockdown

“A few days ago, they told me to stop selling pots and other mud items,” he says. “That’s funny, because I hardly have any customers. Maybe one a week – or none.” He sets up his ‘shop’ on the Akkayapalam main road on a handcart, where he displays lots of diyas and other small, decorated and painted items. Most of the larger, mainly decorative clay pieces, are stacked on racks outside his house.

“Now police have asked us to keep these also inside. But where do I put them?” Shankar asks. Much of his house is filled with newly made Ganesha idols, and some left over from previous years, along with other clay items.

“You see, pottery looks cheap to many. But we have to invest a huge amount in it,” he says. “It is a gamble,” adds Madhavi

The potters of Kummari Veedhi buy a truckload of mud (roughly 4-5 tons) for Rs. 15,000 every year. For this clay (and other materials), Shankar borrows money from local lenders – at an annual interest rate of 36 per cent. At the end of Ganesh Chaturthi and Diwali, he pays them back with the earnings from selling idols and diyas . “If I am unable to sell much this season, I won’t be able to pay them back,” he says, worried.

They dry the mud they purchase in the sun for 2-3 days before mixing it with water and stamping it down with their feet. Usually, Madhavi does the stamping. “That takes around 4-5 hours,” she explains. After this, the idols are shaped using Plaster of Paris moulds. “Earlier, the moulds used to last 3-4 years. But now they are of poor quality and must be replaced every year,” Shankar says. Each mould costs around Rs. 1,000. 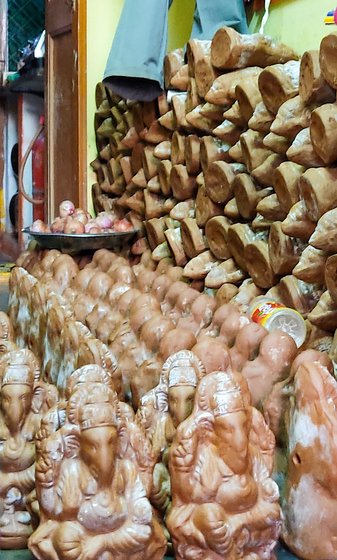 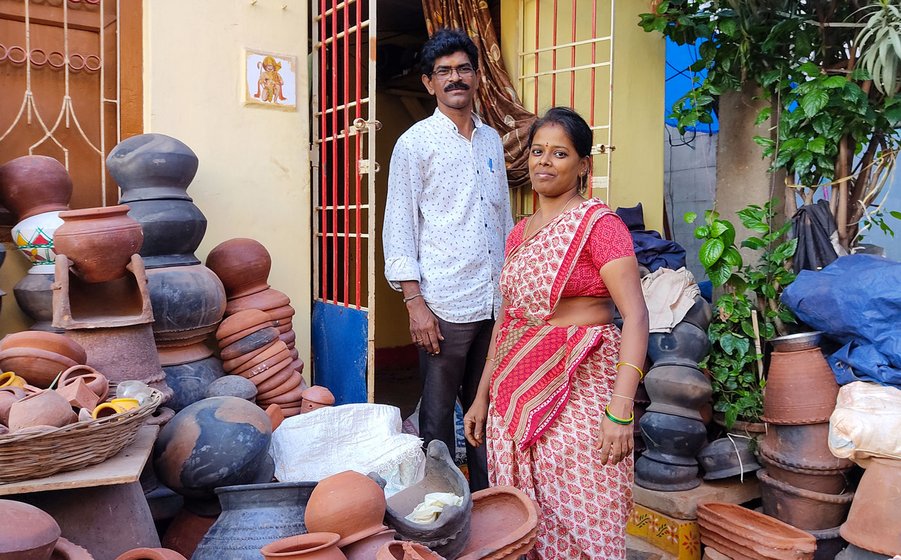 After moulding, the idols are left to dry for over a week. Once dry, they are painted. “It costs us around Rs. 13,000-15,000 to buy paints and other materials required [for the festival season],” Shankar says. “This year I haven’t bought any yet. I feel no one will buy. But my son thinks otherwise. Either way, we have to sell to survive.”

“Usually, people begin paying us for the idols in June itself. But we’ve had no income since April,” Shankar says. “Even the little we earn from selling pots and other items has fallen to zero.”

Just a few houses away is S. Srinivasa Rao’s three-room house. Right now, a major part of it is filled with unpainted Ganesha idols. Along with pottery, Srinivasa Rao, 46, took a job as a clerk in a nearby private college 10-12 years ago.

His wife, S. Satyawati, 38, has persisted with pottery. “Pottery is our kula vruthi [caste occupation] and has provided at least a little income,” she says. “I have no education, I only know how to make pots, diyas and idols. We are a family of nine, including my three daughters. We can’t all depend solely on his earnings.”

Satyawati makes only small Ganeshas, selling them for Rs. 30 each. “So far, I have made 40 idols,” she says – over the 10 days preceding our meeting in mid-July. Usually, her profits from selling these in the festival season vary between Rs. 3,000 and Rs.4,000. 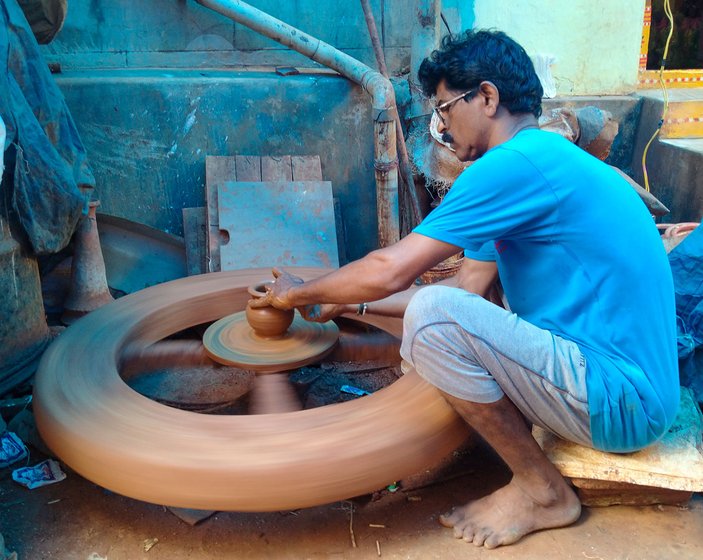 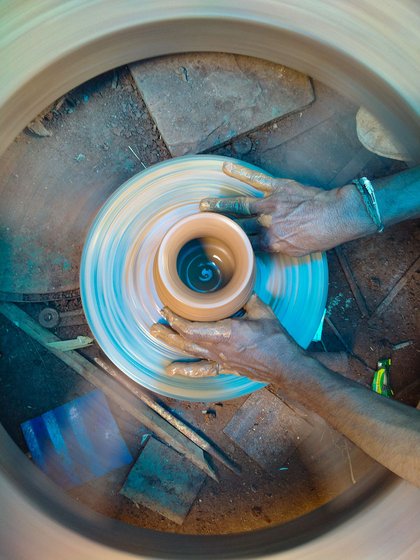 Along with pottery, Srinivasa Rao took a job as a clerk in a nearby private college 10-12 years ago

Srinivasa Rao has not received his salary – Rs. 8,000 a month – since May, but has been going to work at the college from June onwards. “I hope I get my salary this month,” he says.

In his free time, he helps his wife make idols. “The more the idols, the more the income,” he says. Srinivas believes they can sell their idols even this year, despite not receiving orders. “The times are bad,” he reasons, “so many will want to pray to god and perform rituals.”

Satyawati is worried about her two older daughters, aged 15 and 16. “They have both passed 10th standard. A lot of intermediate colleges are demanding the usual fee – around Rs. 45,000 a year for each – even though its only online classes right now,” she says. “We still haven’t enrolled them anywhere. We are hoping the fees will be reduced.” Sending her youngest daughter, aged 10 and in Class 4, to an English-medium private school costs her Rs. 25,000 a year.

She recalls a time when Kummari Veedhi was happier, especially just before Ganesh Chaturthi and Diwali. “This street bustled with joy and the smell of semi-wet mud,” she says. “But now, there are only four families left practicing pottery.”

The only immersion here this season could be not of Ganpati, but of these families in debt.