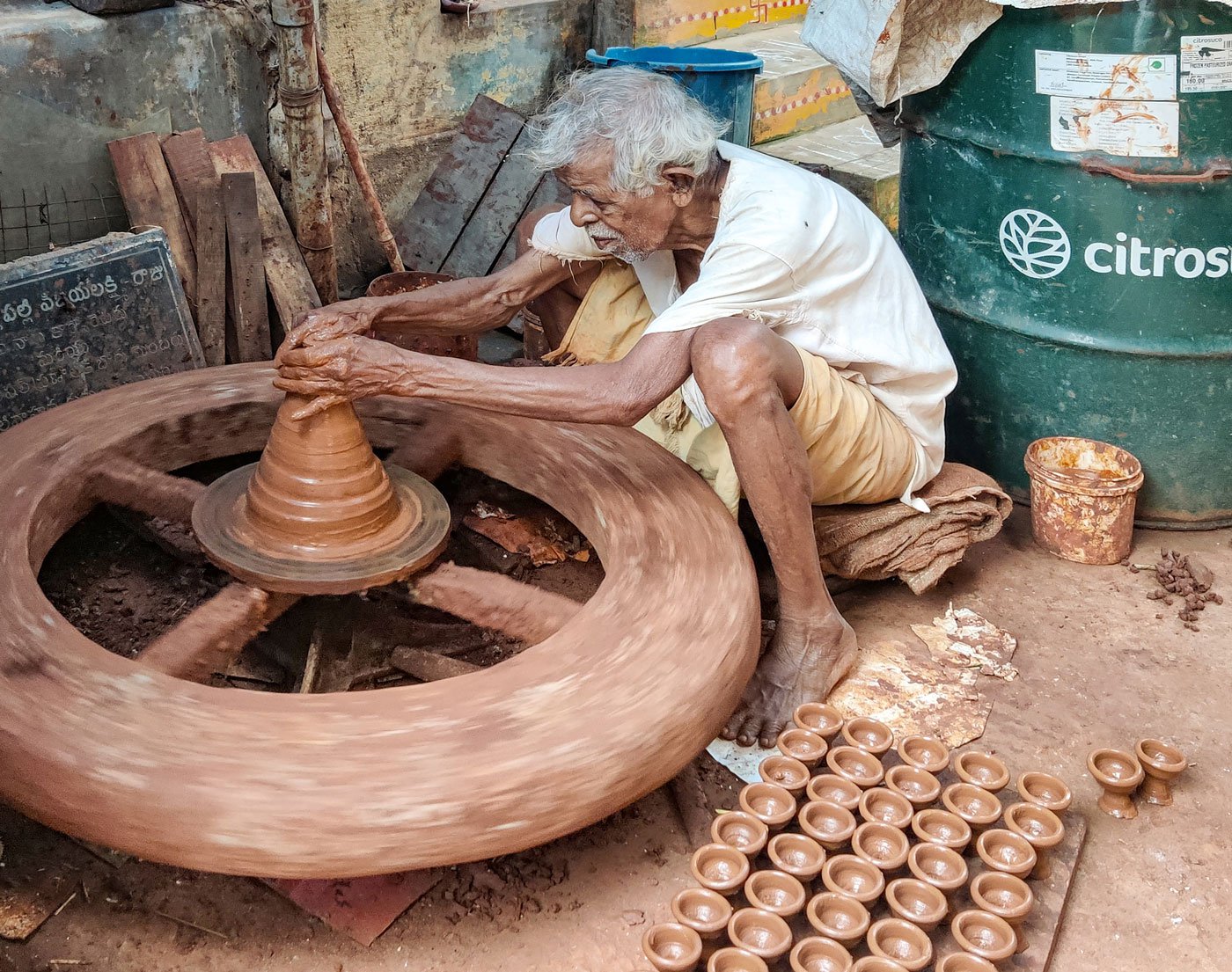 S. Paradesam has made lakhs of diyas to light up homes celebrating Diwali. The 92-year-old is the last potter in Visakhapatnam’s Kummari Veedhi making lamps for the festival

Srikakulam Paradesam says he has made nearly 10,000-12,000 diyas this Diwali. The 92-year-old potter started more than a month before the festival being celebrated this week. Every day he would begin working at 7 a.m. after a cup of tea and continue until late evening with just a couple of breaks.

A few weeks ago in early October, Paradesam tried his hand at making diyas with a small stand. “These are slightly more difficult to make. One has to get the thickness of the stand right,” he says. A stand prevents the cup-shaped lamp filled with oil from toppling over, and the burning wick from going out. It also takes him five minutes to make one as compared to the two minutes in which he spins out a regular one. But in order to not lose customers, he charges only a rupee more than the regular diya that sells for Rs. 3.

Paradesam’s enthusiasm and fondness for his craft has kept the potter’s wheel spinning for over eight decades in his home in Visakhapatnam’s Kummari Veedhi. In this time he has made lakhs of diyas or deepams that have lit up homes celebrating Diwali. “Shapeless mud turns into an object using just our hands, energy and a wheel. It is a kala [an art],” says the nonagenarian who lives with his family and doesn’t move around much as his hearing is slightly impaired.

Kummari Veedhi is a narrow street close to the busy market area of Akkayyapalem in Visakhapatnam city. A majority of the residents in the street are Kummara – a potter community traditionally engaged in the making of clay items including idols. Paradesam’s grandfather migrated to the city from Potnuru village in Padmanabhan mandal also in Visakhapatnam district looking for work. He remembers a time when he was younger and the 30 Kummara families on this potters' street would all be making diyas , pots for plants, ‘piggy banks', mud jars, cups and other clay items including idols.

Today, Paradesam is the last craftsman of diyas in what is regarded as the only home of potters in Visakhapatnam. Other potter families here have switched to making only idols and other clay items that are more profitable, or completely left the craft. Until a decade ago, he too made idols for festivals but slowly stopped: Idol making is more physically arduous work and he says he finds it hard to sit on the ground for hours. 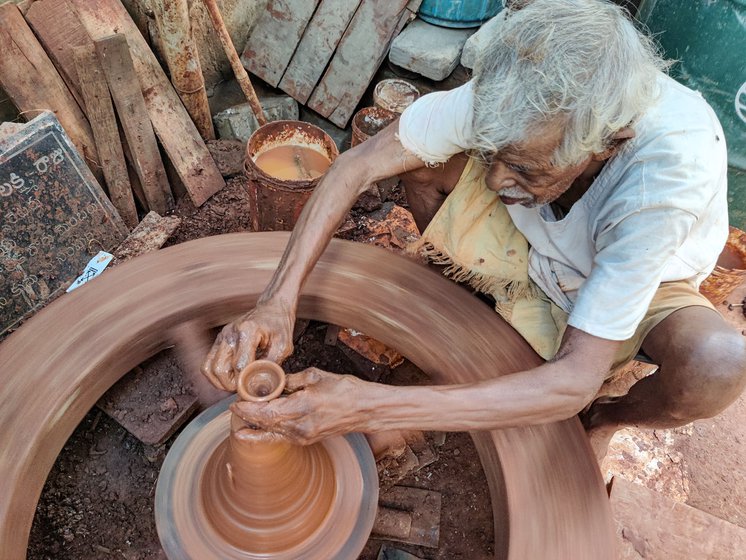 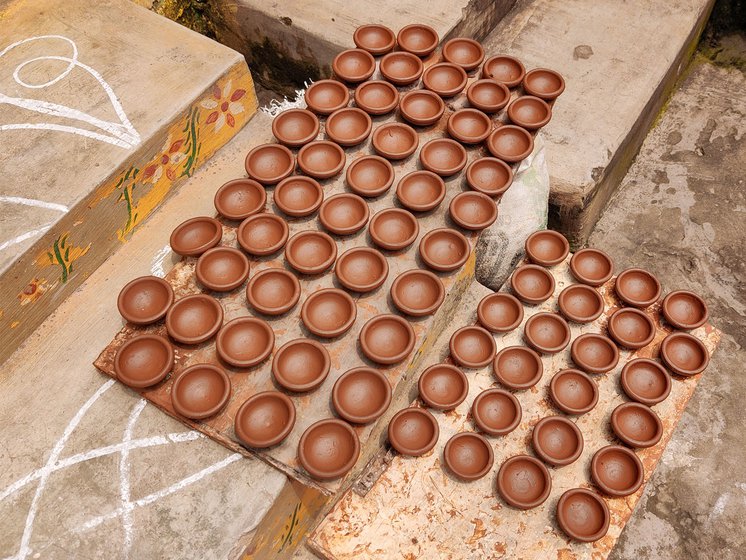 Left: Paradesam is the only diya maker on Kummari Veedhi (potters' street) in Visakhapatnam He starts after Vinayak Chaturthi and his diyas are ready by Diwali 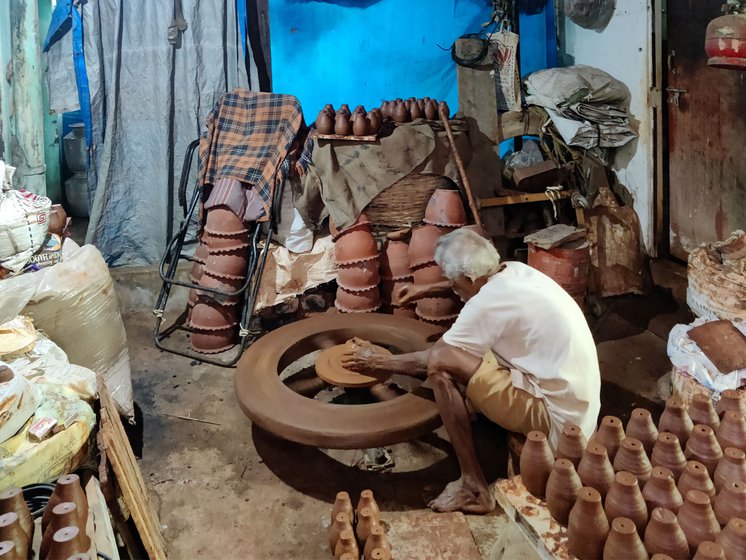 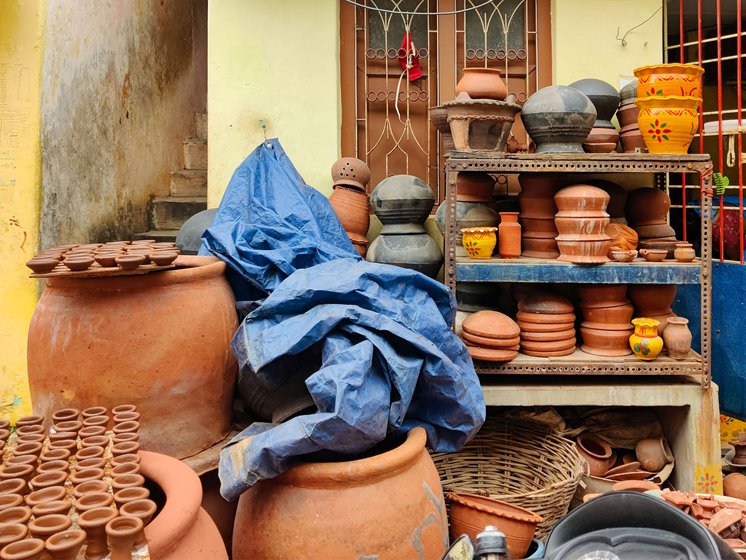 Left: Paradesam made a 1,000 flowerpots (in the foreground) on order and was paid Rs. 3 for each. These are used to make a firecracker by the same name. Right: Different kinds of pots are piled up outside his home in Kummari Veedhi (potters' street)

Paradesam now waits for Vinayak (Ganesh) Chaturthi to end so that he can begin making diyas for Diwali. “I don’t really know why I find happiness in making diyas . But I do. The smell of the mud is perhaps what I like the most,” he says, at work in a makeshift structure in the lane near his house. The room is filled with lumps of clay, broken pots, idols and drums used to store water.

As a young child, Paradesam learnt from his father how to make the regular diyas used at Diwali for lighting up homes. He would go on to make both regular and decorative diyas , pots for plants, money banks and Ganesha idols for Vinayak Chaturthi. He also learnt to make ‘flowerpots’ – a small clay pot that is used in the firecracker industry to create a cracker by the same name. Recently he received an order for 1,000 flowerpots and was paid Rs. 3 for each.

In a day, the skilled Paradesam can still make around 500 diyas or flowerpots in the months leading up to Diwali.  He estimates that nearly one in three items he moulds doesn't make it – breaking or cracking when baked in the wood-fired kiln or later while being cleaned. The potters blame the poor quality of mud they get now for this.

Paradesam’s son, Srinivas Rao and daughter-in-law, Sathyawathi help out during the busy season. Together, the family earns roughly Rs. 75,000 during the July-October festival season. The rest of the year this street gets few visitors and sees almost no sales. Srinivas’s job at a school brings in Rs.10,000 a month and the family relies on this income.

Last Diwali, Covid put a damper on sales, and they managed to sell only 3,000-4,000 diyas and no flowerpots.  "No one wants simple handmade diyas anymore,” he says speaking to PARI a week before Diwali even as he was hopeful that demand would pick up.  “They [buyers] want machine-made diyas with designs,” he says referring to the patterned diyas made with die-cast moulds in small industrial units. Many former potters’ family’s here in Kummari Veedhi buy these diyas for Rs. 3-4 a piece and sell them for Rs. 5-10 each depending on the design.

Despite the competition, Paradesan lights up when he says, “Making simple earthen diyas are my favourite because my granddaughter likes them.” 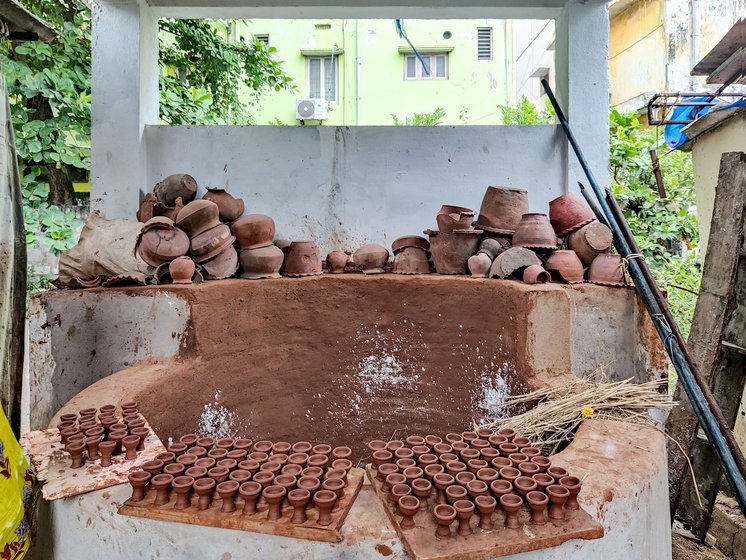 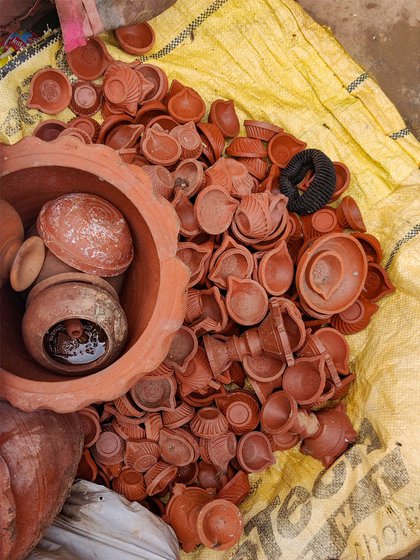 Left:  The kiln in Kummara Veedhi is used by many potter families. Right: Machine-made diyas washed and kept to dry outside a house in the same locality 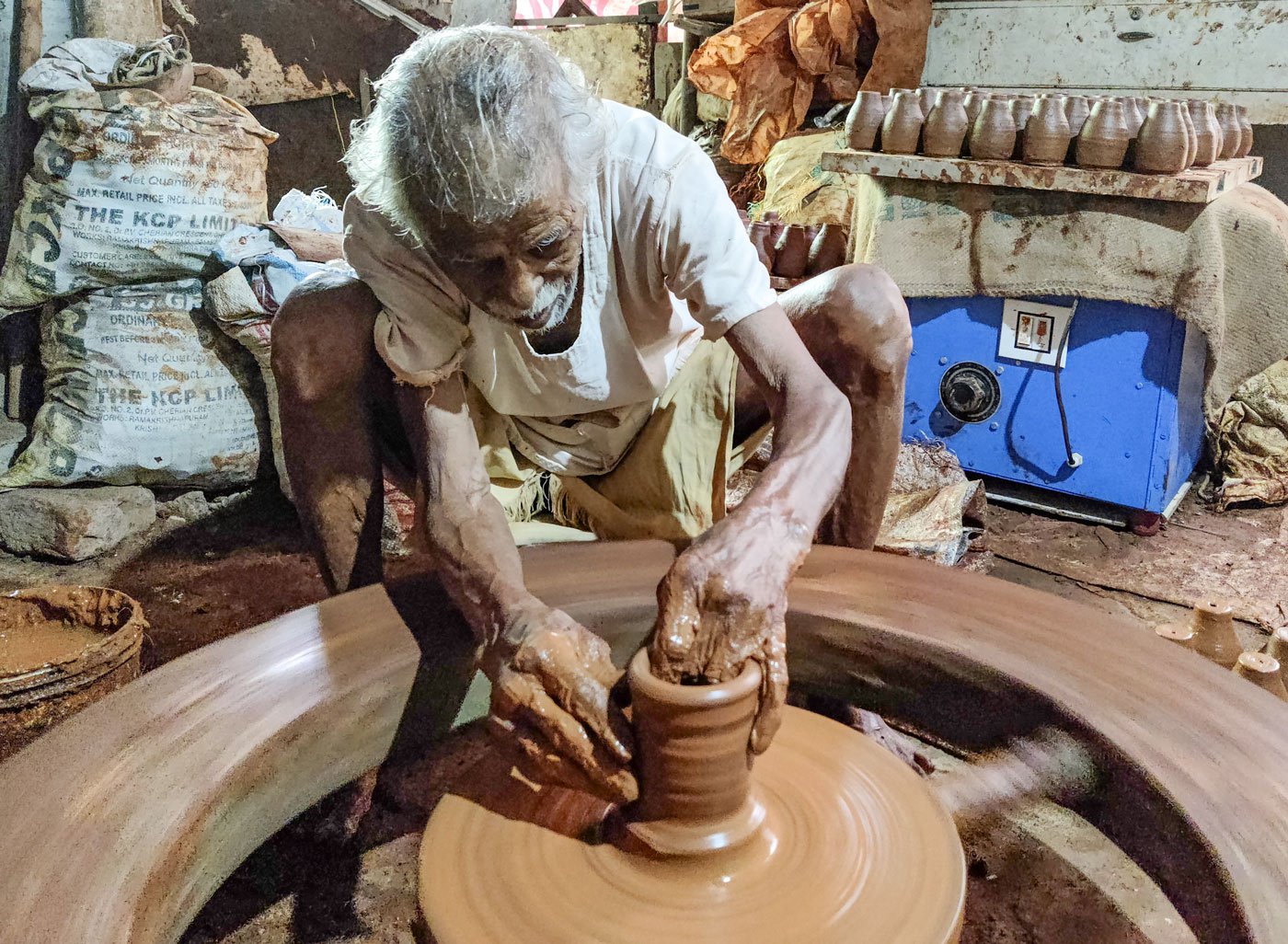 On a rainy day, Paradesam moves to a makeshift room behind his home and continues spinning out diyas

The few families in Kummari Veedhi that are still engaged with the craft buy matti (clay) from a dealer a few months ahead of Vinayak Chaturthi every year. Together they buy a truckload of mud, roughly five tonnes. They pay Rs. 15,000 for the mud and Rs. 10,000 for its transportation from specific locations in the neighbouring Vizianagaram district of Andhra Pradesh. Getting the right jinka matti – a mud with the natural presence of glue is crucial for making both clay artefacts and idols.

Paradesam’s family takes nearly a tonne or 1,000 kilograms of the load. A week before Diwali some of the mud can still be seen stacked outside his house in big gunny bags.  The dark red mud is dry and lumpy and they must slowly begin mixing it with water to bring it to the right consistency. Later it will be stamped upon to mix it up; Paradesam says it feels hard and also has small rocks that poke his feet.

Once the clay has reached the right texture, the master craftsman brings out the heavy wooden wheel marked with splashes of dried up clay from a corner and places it on a stand. He then folds a cloth over an empty paint can and that becomes his seat in front of the wheel.

Paradesam's wheel, like other potter's wheels in Kummari Veedhi, is a manual one. He has heard of an electrically run wheel but is unsure how he can control it. “The speed should vary for every kunda [pot] and deepam [lamp]” he points out.

Throwing a handful of wet clay onto the centre of the wheel, his hands work gently but firmly, digging into the clay and gradually shaping the diya . The smell of wet mud fills the air as the almost metre-wide wheel begins rotating. To keep the momentum going, he turns it with the help of a large wooden stick. "I am getting old now. I can't always use the same force," says Paradesam. Once the diya starts taking shape and becomes sturdy, the potter uses a thread to slice it off the moving wheel.

As they come off the wheel he arranges the diyas and flowerpots carefully in a row on a rectangular plank of wood. The clay items must dry for 3-4 days in the shade. After drying, the items are placed in a kiln and baked for over two days. The kiln is lit once every 2-3 weeks between July to October (for Vinayak Chaturthi, Dussehra and Diwali). During other times of the year it is lit barely once a month. 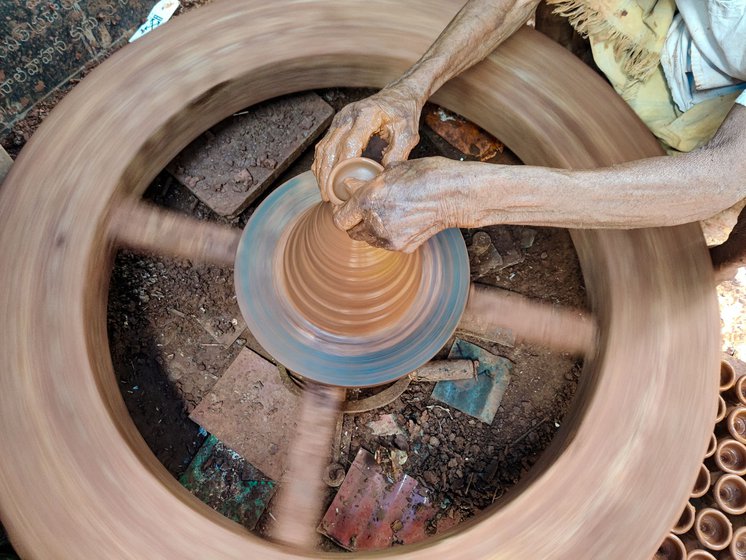 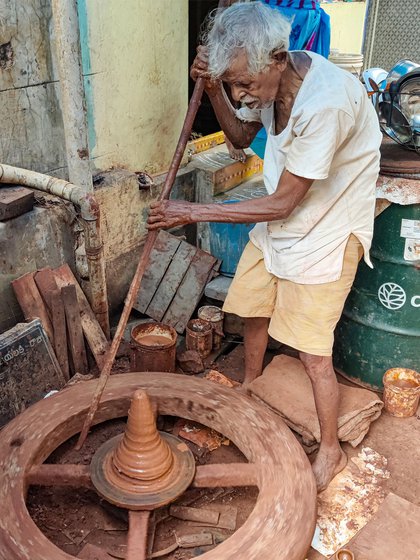 Left: The wooden potters' wheel is heavy for the 92-year-old potter to spin, so he uses a long wooden stick (right) to turn the wheel and maintain momentum 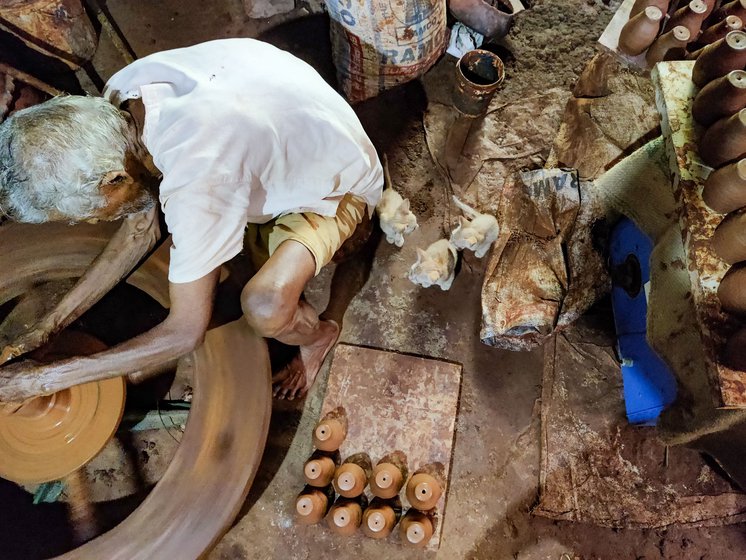 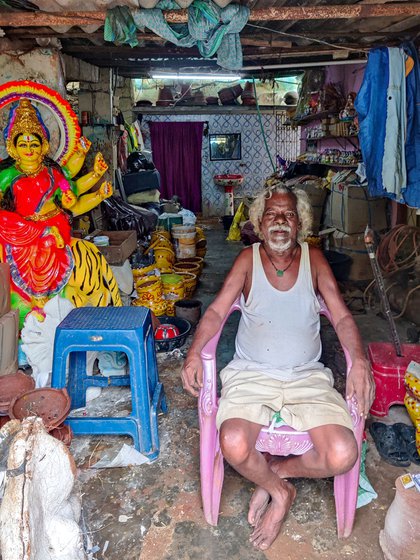 Left: Paradesam is not alone – a few kittens area always around him, darting in and out of the wheel. Right: His neighbour and friend, Uppara Gauri Shankar in his house

The late monsoon rains on the eastern coast of India don’t stop or slow him down in the run up to Diwali. The veteran potter simply relocates to a cramped space behind his house that is roughly covered by plastic sheets and continues on a rainy day. A few kittens play around him, darting around the spinning wheel and bits and pieces of pottery and discarded household goods.

Paradesam’s wife,  Paidithalli is unwell and stays close to her bed. The couple had four children- two daughters and two sons, one of whom passed away when young.

“It is sad that I am the only one left making diyas. My entire life I thought at least my son would continue pottery,” Paradesam says. “I taught my son how to spin the wheel. But the money from making Ganesha idols and diyas is not sufficient so he works as a peon in a private school.”  A dozen of Paradesam’s handmade diyas sell for Rs. 20 but if someone bargains, he drops the price to as little as Rs. 10 and the few rupees worth of profit disappears.

“No one understands how much effort goes into making the regular diyas ,” says Uppara Gauri Shankar. A resident of Kummari Veedhi, the 65-year-old lives a few houses away from Paradesam and they have been neighbours all their lives. Gauri Shankar can no longer spin the wheel or sit on the ground. “My back aches and it becomes impossible to get up,” he says.

Until a few years ago, Gauri Shankar says his family made diyas by hand, starting a month before Diwali. He stopped because he says the handmade ones are priced so low that they barely cover the cost of the mud. So this year Gauri Shankar’s family has bought around 25,000 machine-made diyas that they are hoping to sell and make some profit.

But he helps his friend Paradesam knead the mud with his feet. “This is the first step in making diyas . This [stamping] is my only contribution to his wish to keep the pottery wheel spinning,” he says and adds, “Paradesam is old. Every year feels like it may well be his last year making diyas. ”

This story is supported by a fellowship grant from Rang De .

Amrutha Kosuru is a 2022 PARI Fellow. She is a graduate of the Asian College of Journalism and lives in Visakhapatnam.