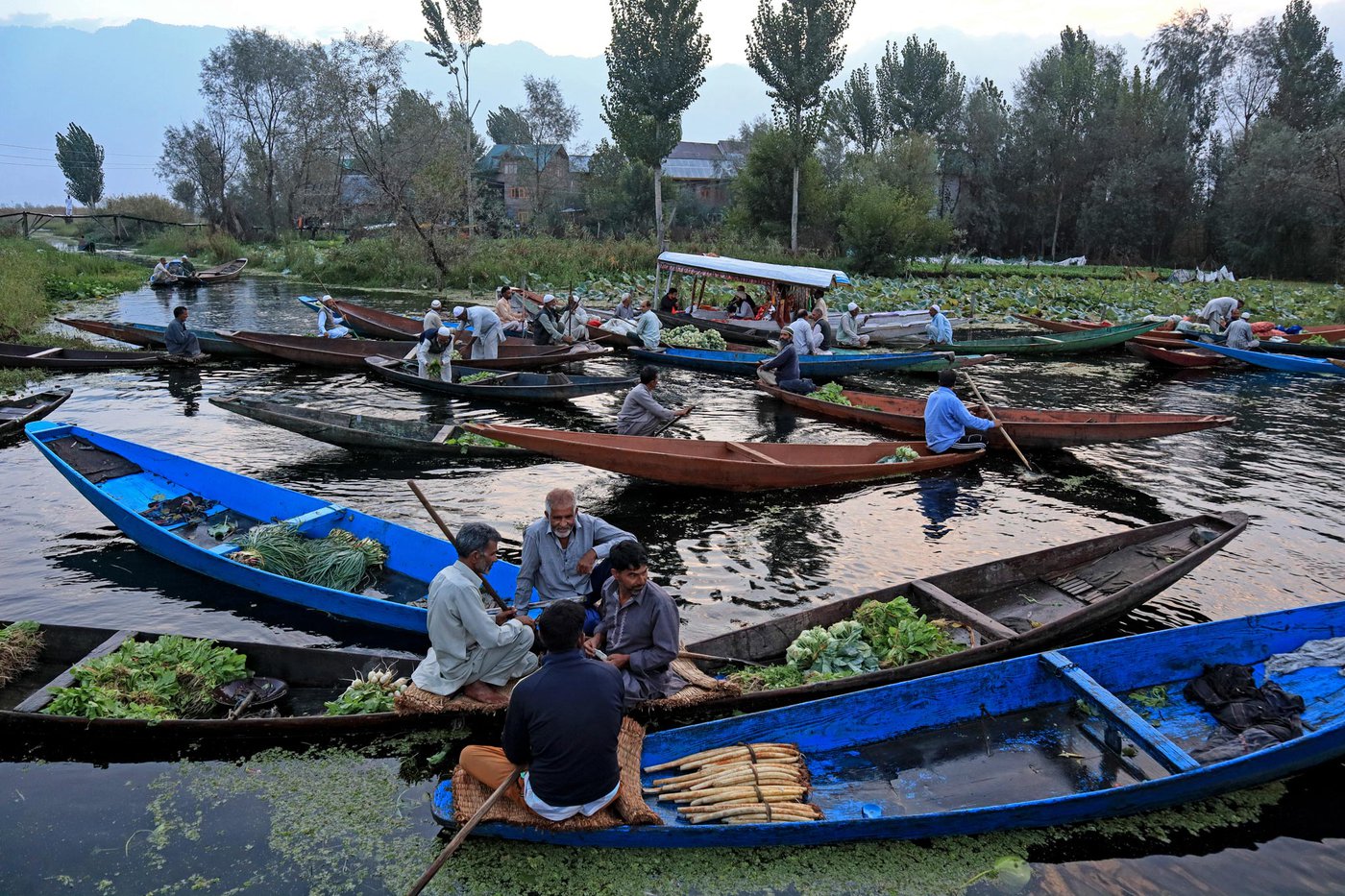 Vegetable trade on the Dal: in troubled waters

The floating gardens on the Dal in Kashmir supply tonnes of vegetables to the market on the lake, but with the administration moving people out of the area, farmers and traders fear for their livelihoods

“When workers from outside the Dal hear that they have to work on floating gardens, they worry about drowning!” says Mohammad Maqbool Mattoo, smiling.

The 47-year-old farmer in Moti Mohalla Khurd area of the Dal lake in Srinagar city says he ends up paying them Rs. 700 a day – Rs. 200 more than what people pay for agricultural work in and around Srinagar, in the Kashmir valley. To reduce his spending on labour, he says, “My wife Tasleema and I come everyday [to work], even if we are busy.”

Mohammad Maqbool Mattoo uses a boat to get to his 7.5 acres of floating gardens on the Dal – locally referred to as Dal ke garden – where he cultivates a variety of vegetables like turnips and haakh (collard greens) through the year. He does it even in winter, when temperatures drop to –11°C and he must break the icy surface of the lake to manoeuvre his boat. “This trade does not fetch us enough money nowadays. I do this because it is the only thing I can do,” he says.

Spread over 18 square kilometres, the Dal is well known for its houseboats, shikara (boat) rides, the Char Chinar island of ancient maple trees, and Mughal-era gardens that border the lake. It is Srinagar’s primary tourist attraction.

Floating houses and floating gardens sit on the lake, which is part of a natural wetland that  covers about 21 square kilometres. The floating gardens  are of two kinds: raadh and demb . Raadh is a woven floating garden made by hand by the farmers, who weave  two types of weeds together: pech ( Typha angustata ) and nargasa ( Phragmites australis ). The woven mat-like structure can measure between a tenth of an acre to three times that size. It is dried out on the lake for 3-4 years before it can be used for cultivation. Once dry, the  mat is layered with mud after which it becomes suitable to grow vegetables. Farmers move the raadh around to different parts of the lake.

The demb is marshland found along the banks and edges of the lake. It floats too, but cannot be shifted. 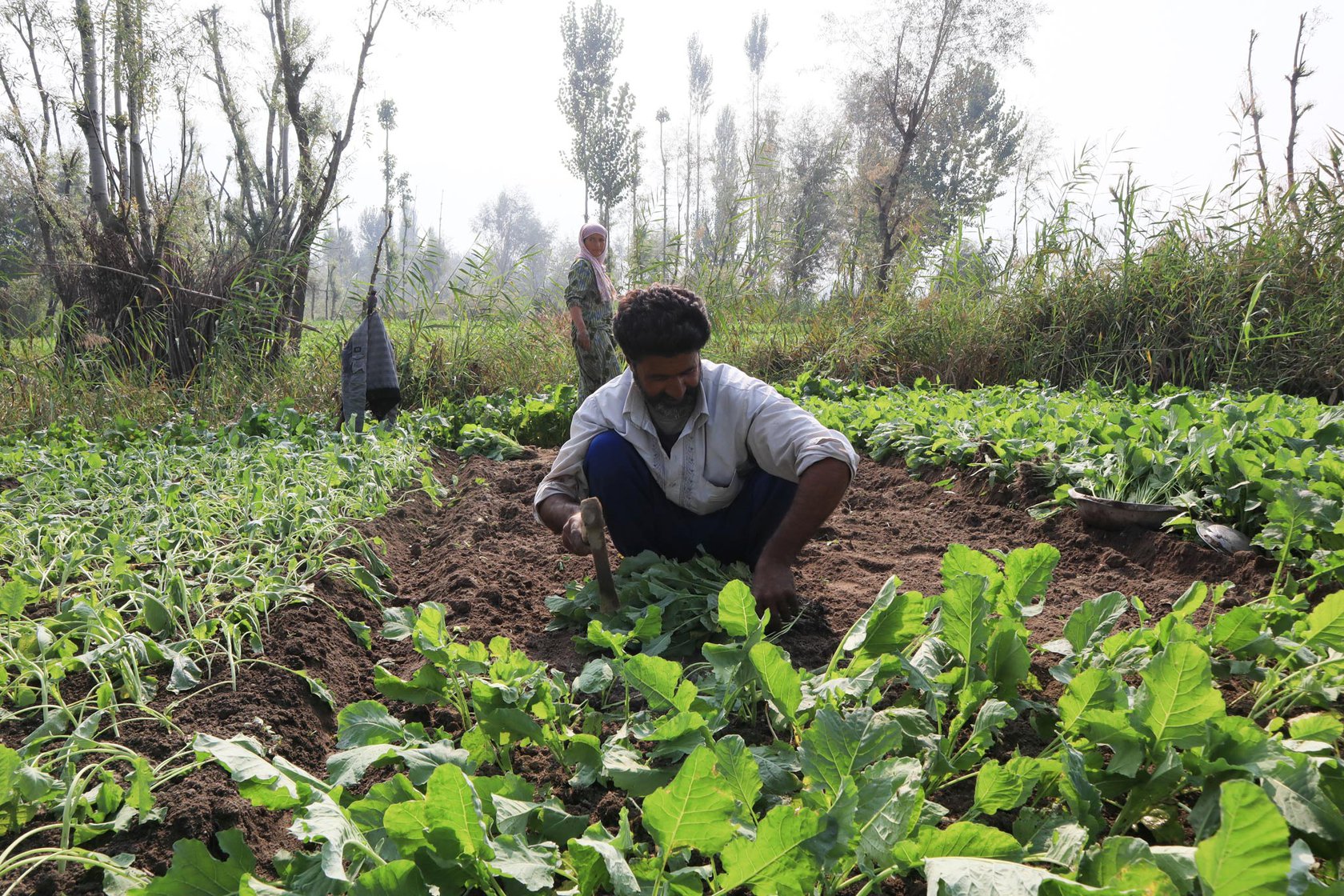 Mohammad Maqbool Mattoo and his wife Tasleema planting haakh (collard greens) in their floating garden at Moti Mohalla Khurd, on the Dal. It takes them about half an hour from their home in the same area on the lake to reach here. They work from 8 a.m. to 4 p.m.

Ghulam Mohammad Mattoo, in his 70s, has been growing vegetables for the last 55 years on his floating gardens at Kurag, another area of the Dal. He lives in Moti Mohalla Khurd, which is about 1.5 kilometres away. “We use hill , a local manure for our gardens. We extract it from the lake water and dry it under the sun for 20-30 days. It is natural and adds to the taste of the vegetables,” he says.

He estimates that around 1,250 acres of the Dal’s water and marshland are under cultivation, yielding turnip, radish, carrot and spinach in winter, and melon, tomato, cucumber and pumpkin in summer.

“This trade is dying because only old people like me are doing it,” says Ghulam Mohammad Mattoo. “It takes a lot of effort to keep the floating gardens fertile – we have to check the water level, add the proper quantity of hill and shoo away hungry birds and other raiders.”

Hundreds of farmers sell the harvest from their floating gardens at the floating vegetable market – locally called ‘ gudder ’ – located on the Dal’s Karapora area. The market opens as the first rays of the sun touch the lake’s surface, and hundreds of boats laden with fresh vegetables line up on the still water.

Abdul Hamid leaves his home on the other side of the lake,  at 4 a.m. every day, with his boat, piled with vegetables such as turnip, haakh and carrot. “I sell them at the gudder and earn around 400-500 rupees every day,”  the 45-year-old farmer says.

For more than a century, the market has been a source of essential vegetables for Srinagar’s residents, says Ghulam Mohammad Mattoo. Most of the produce is sold to wholesale buyers from nearby Srinagar city, who arrive in the morning. A small portion is bartered by farmers for dry rations such as rice and wheat, and vegetables like potatoes, which are not grown on the lake. 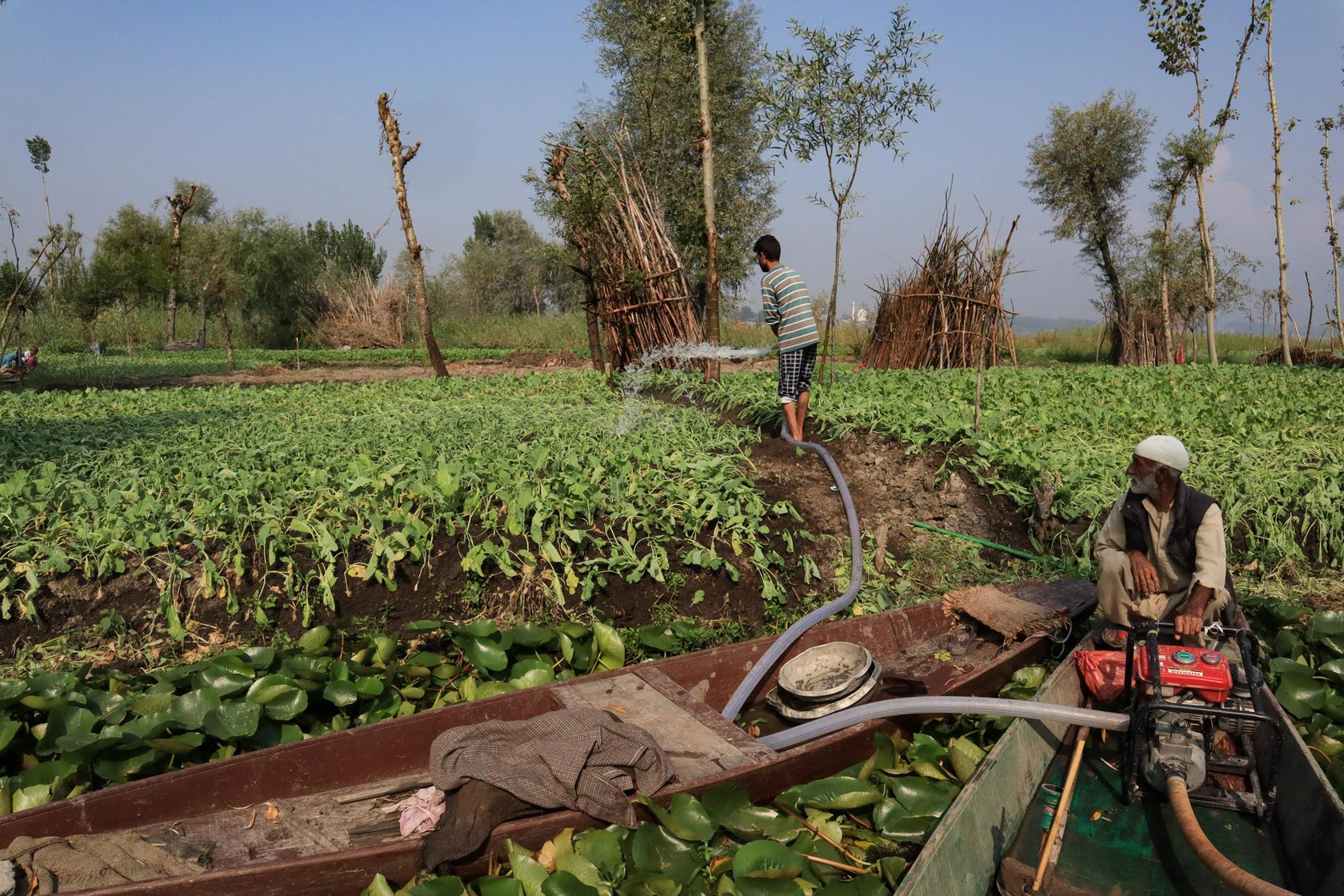 Shabir Ahmad, a large trader of vegetables in the city, procures vegetables at the gudder every day. He says that 3 to 3.5 tonnes of produce is traded at the market daily. “I come in my truck at 5 a.m. and pick up around 8-10 quintals (0.8 to 1 tonne) of fresh vegetables from the growers. I then sell it to street vendors and also supply some of it to the mandi,” says Ahmad, 35. He earns Rs. 1,000-2,000 a day, depending on demand.

Many believe that the vegetables grown on the Dal taste better. Firdousa, a homemaker in her 50s who lives in Srinagar’s Nawakadal area, says, “I like the nadur [lotus stem] of the Dal. It tastes completely different from the nadur grown in other lakes.”

Despite the demand, farmers and wholesalers who depend on the Dal’s vegetable trade, fear they are in troubled waters.

“Cultivation of vegetables on the lake has fallen since the government shifted farmers to Rakh-e-Arth near Bemina” says Shabir Ahmad, a 35-year-old farmer from Rainawari area of Srinagar who farms on the Dal. As part of a long-drawn-out strategy to conserve the Dal, Jammu and Kashmir’s Lakes and Waterways Development Authority (LAWDA) moved to ‘rehabilitate’ the Dal’s residents. Since the late 2000s, over a thousand families from the lake have been moved to a housing settlement developed by the then state government in Rakh-e-Arth, a wetland area 20 kilometres away, in Budgam district of the present union territory.

Older farmers have continued farming on the Dal, but the younger ones have left, citing low returns, adds Shabir.

“The Dal, which used to be crystal clear once, is polluted now. We used to harvest more vegetables 25 years ago,” says Ghulam Mohammad, a 52-year-old farmer who owns less than half an acre of demb on the lake. He says he is struggling to support his family of four, which includes his wife, son and daughter. “I earn 400-500 rupees a day, and from that I have to take care of expenses like school fees, food, medicine and more.”

“The government blames us for the [Dal’s] pollution, but only half of the original dwellers are around. How come the lake was clean when everyone was living here?” he asks. 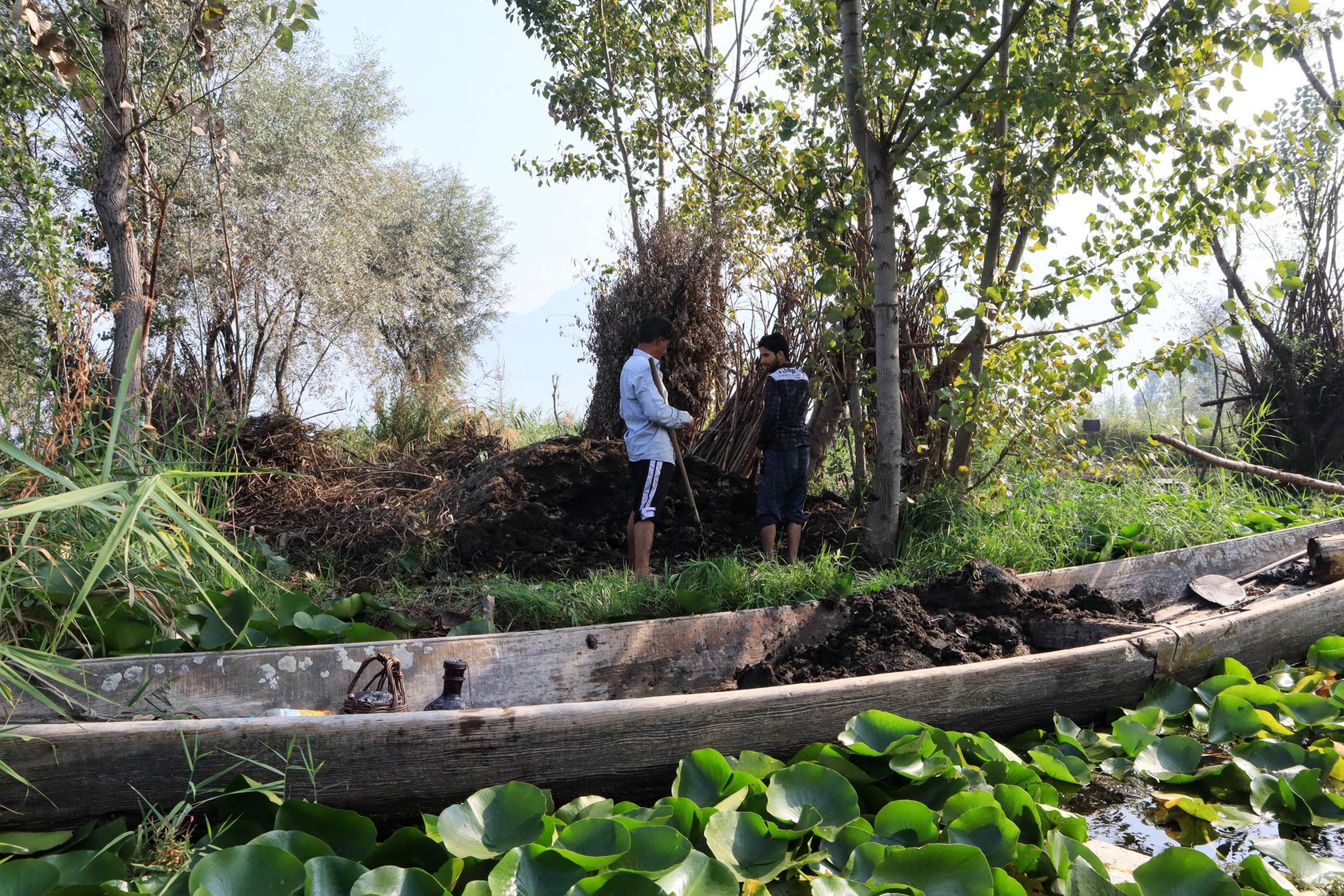 Farmers extracting hill (manure) from the lake, which they will first dry and later use to fertilise their crops 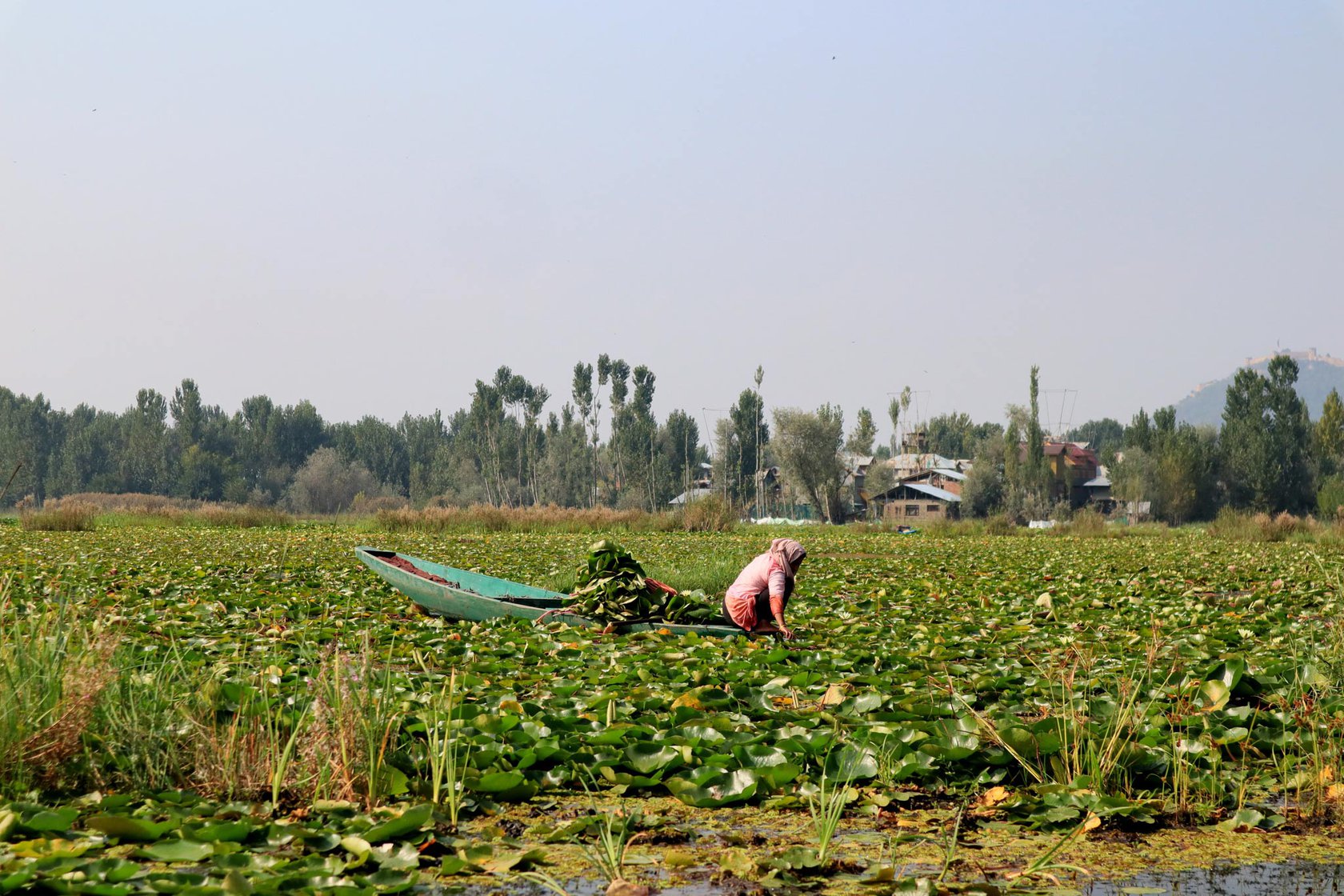 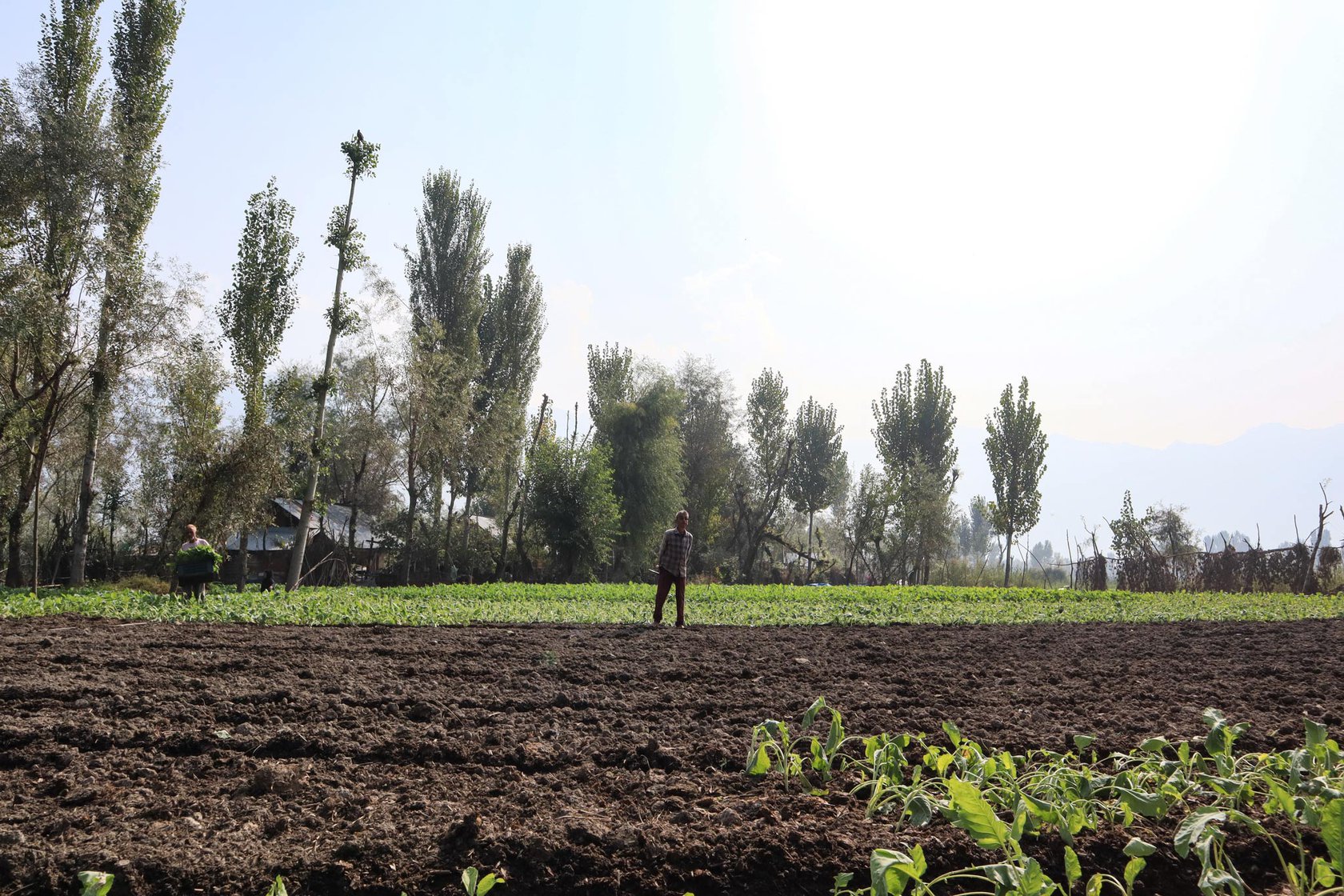 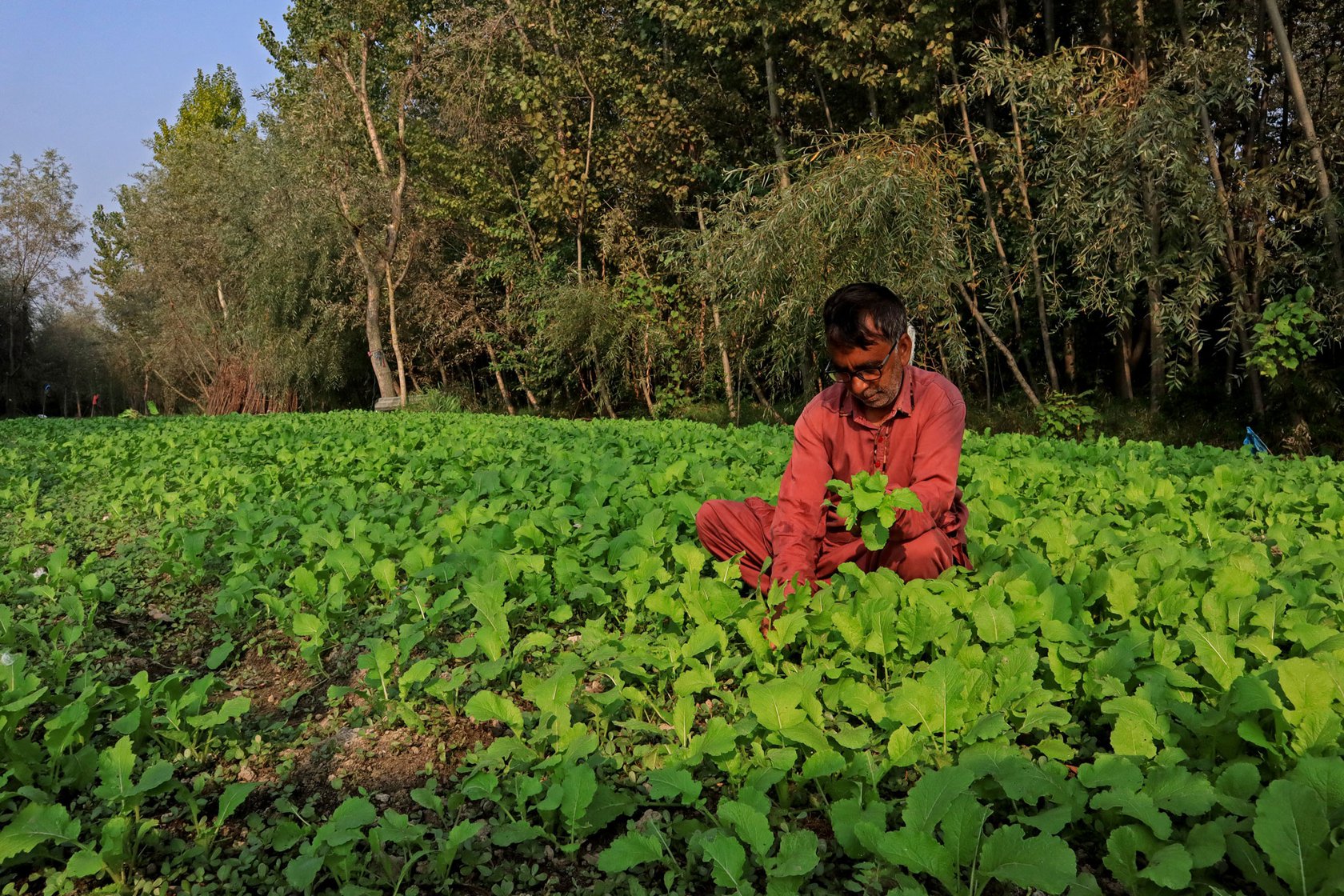 Ghulam Mohammad at work at his demb garden on the lake. “We used to harvest more vegetables 25 years ago,” he says 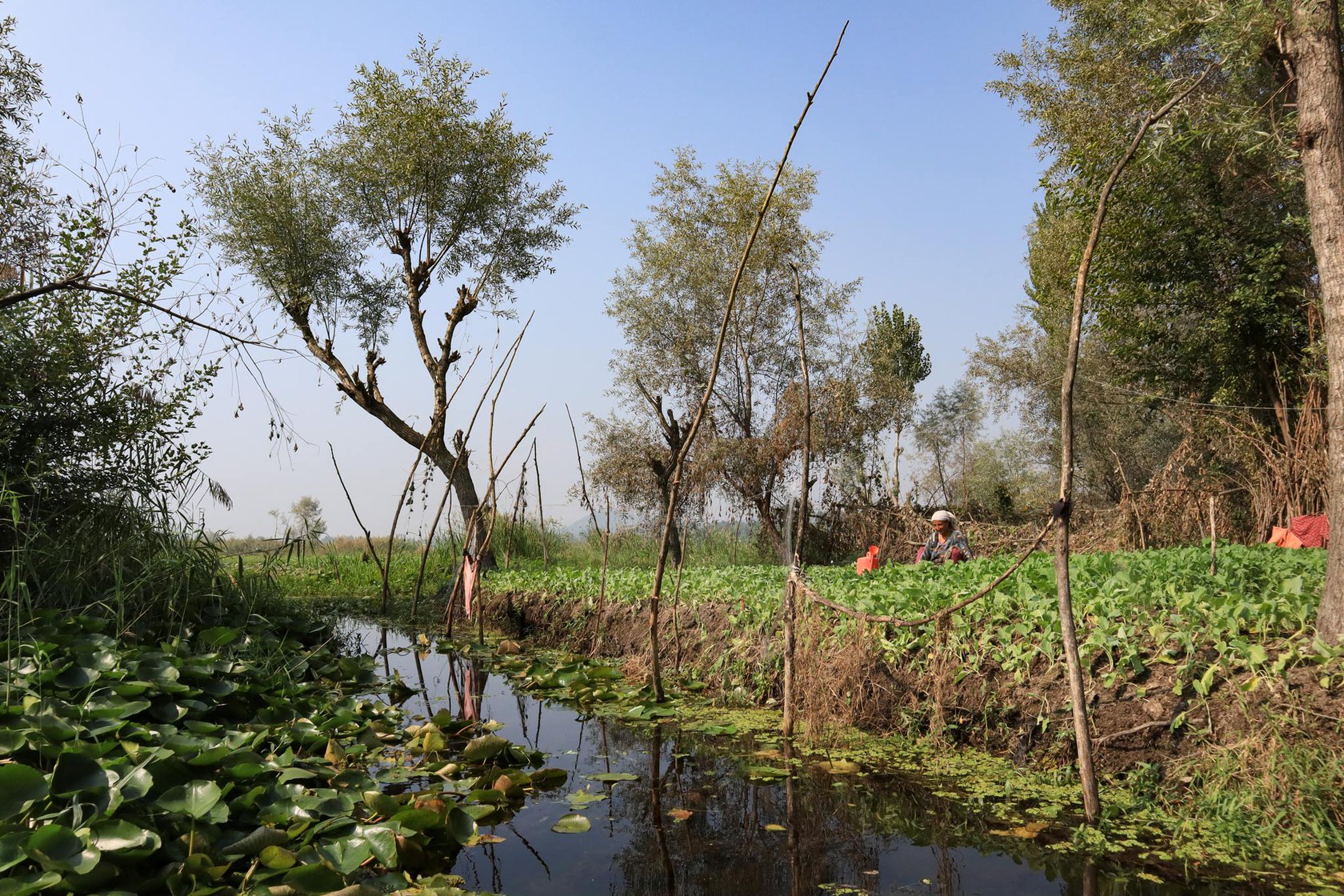 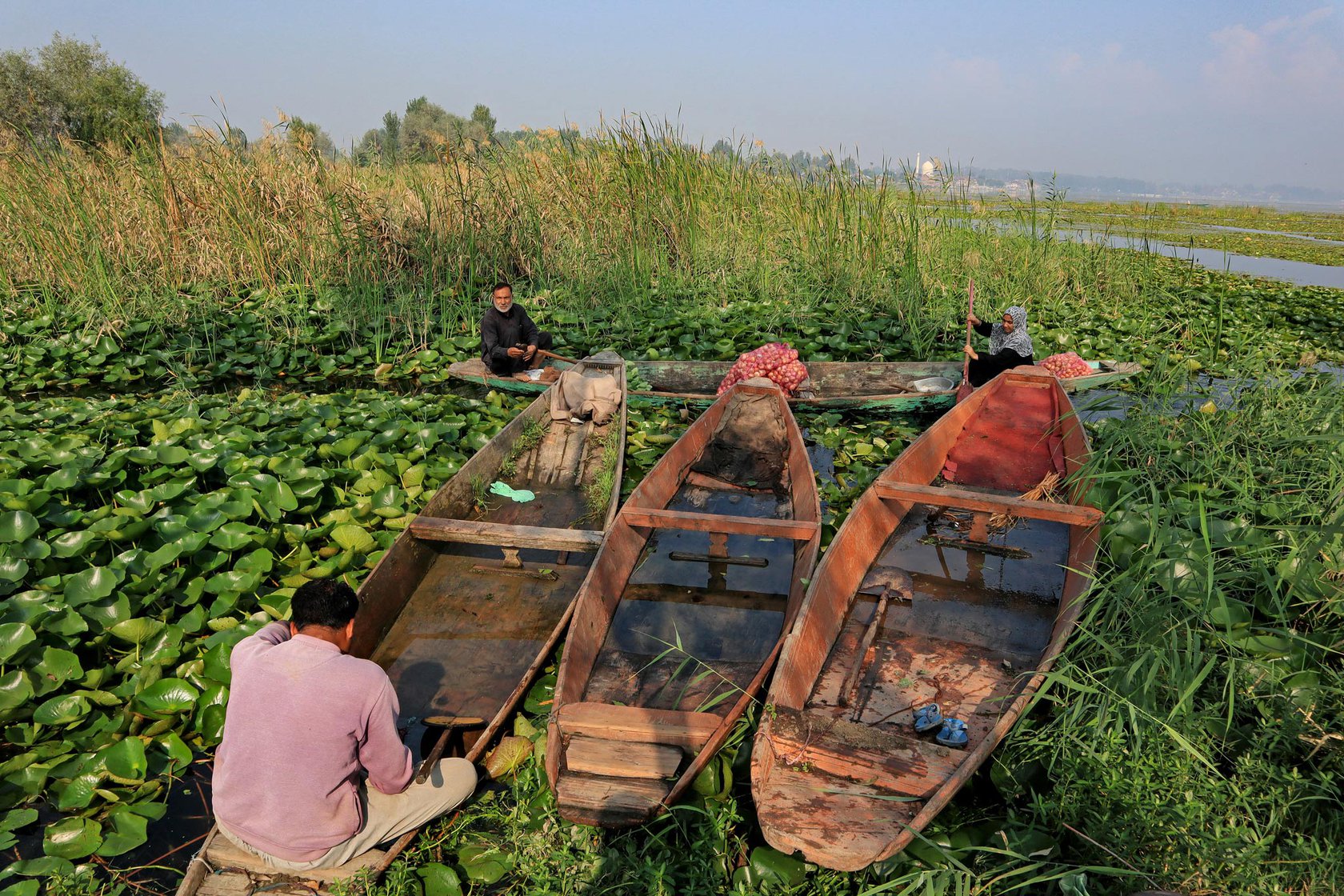 Nazir Ahmad (in black) is one of the farmers who has been moved out of the Dal. He lives in Bota Kadal, in Srinagar’s Lal Bazar area, a few kilometres away from the lake 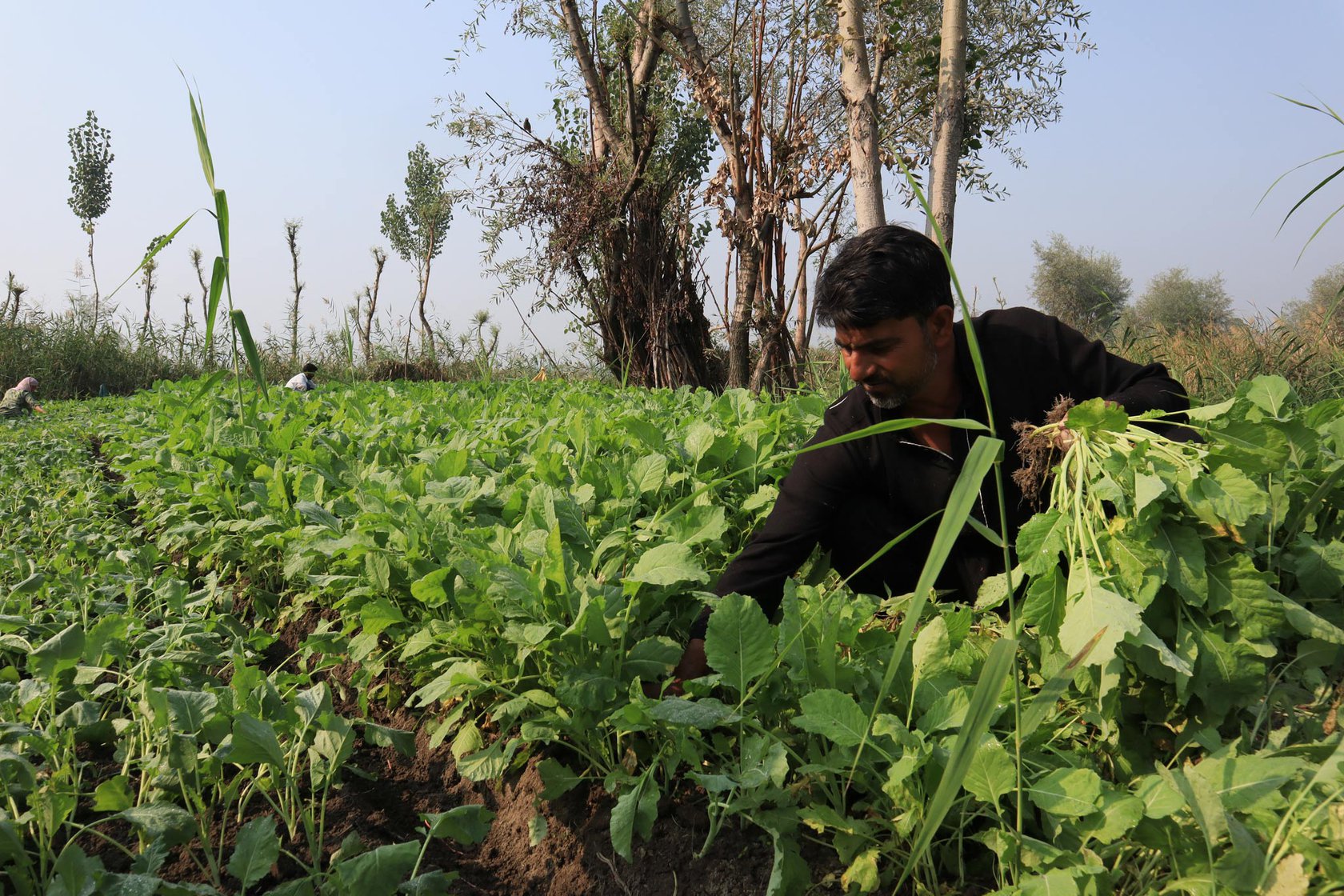 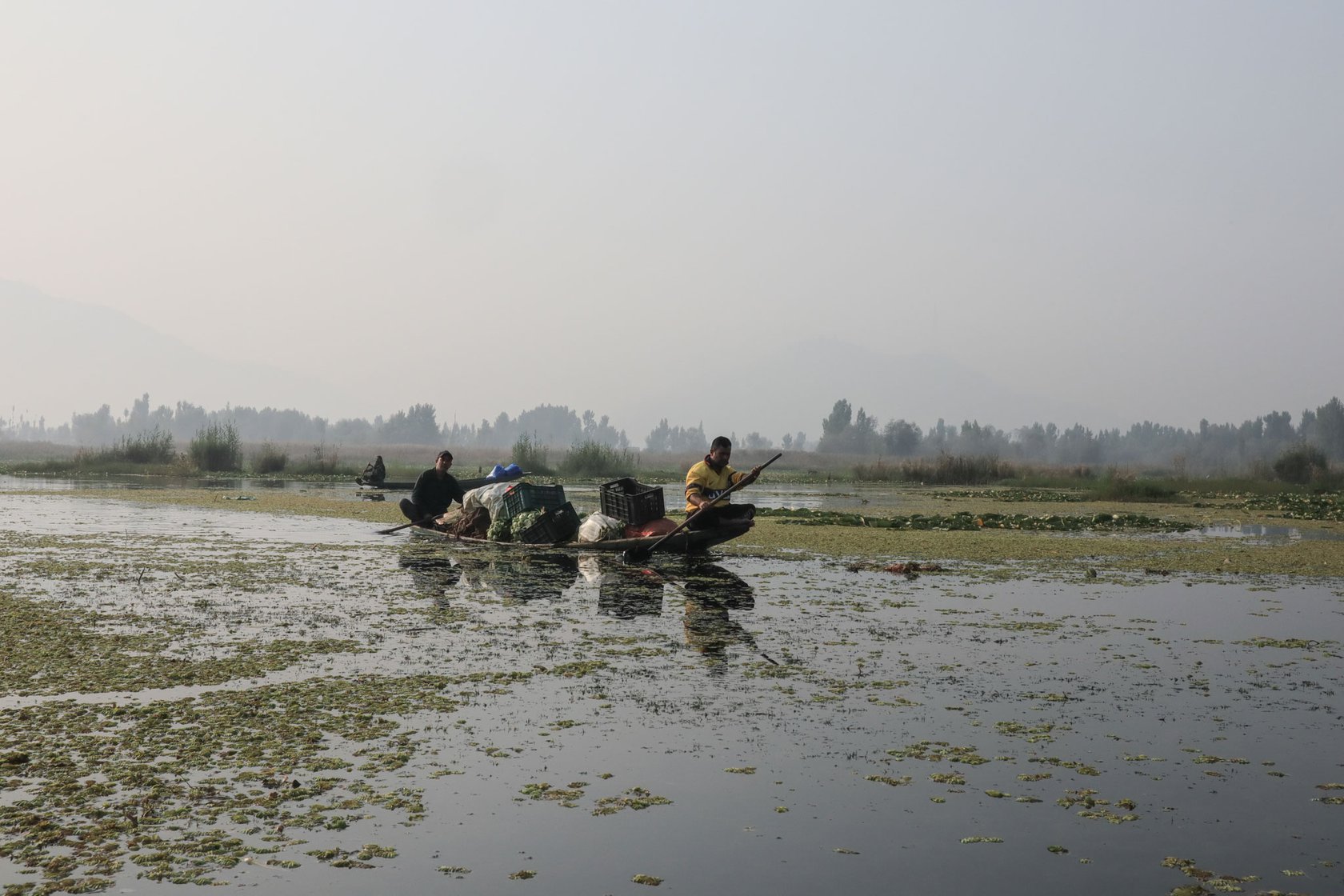 Farmers bring their harvest by boat to sell at the gudder , the floating vegetable market on the Dal, from where it will reach the markets of Srinagar city 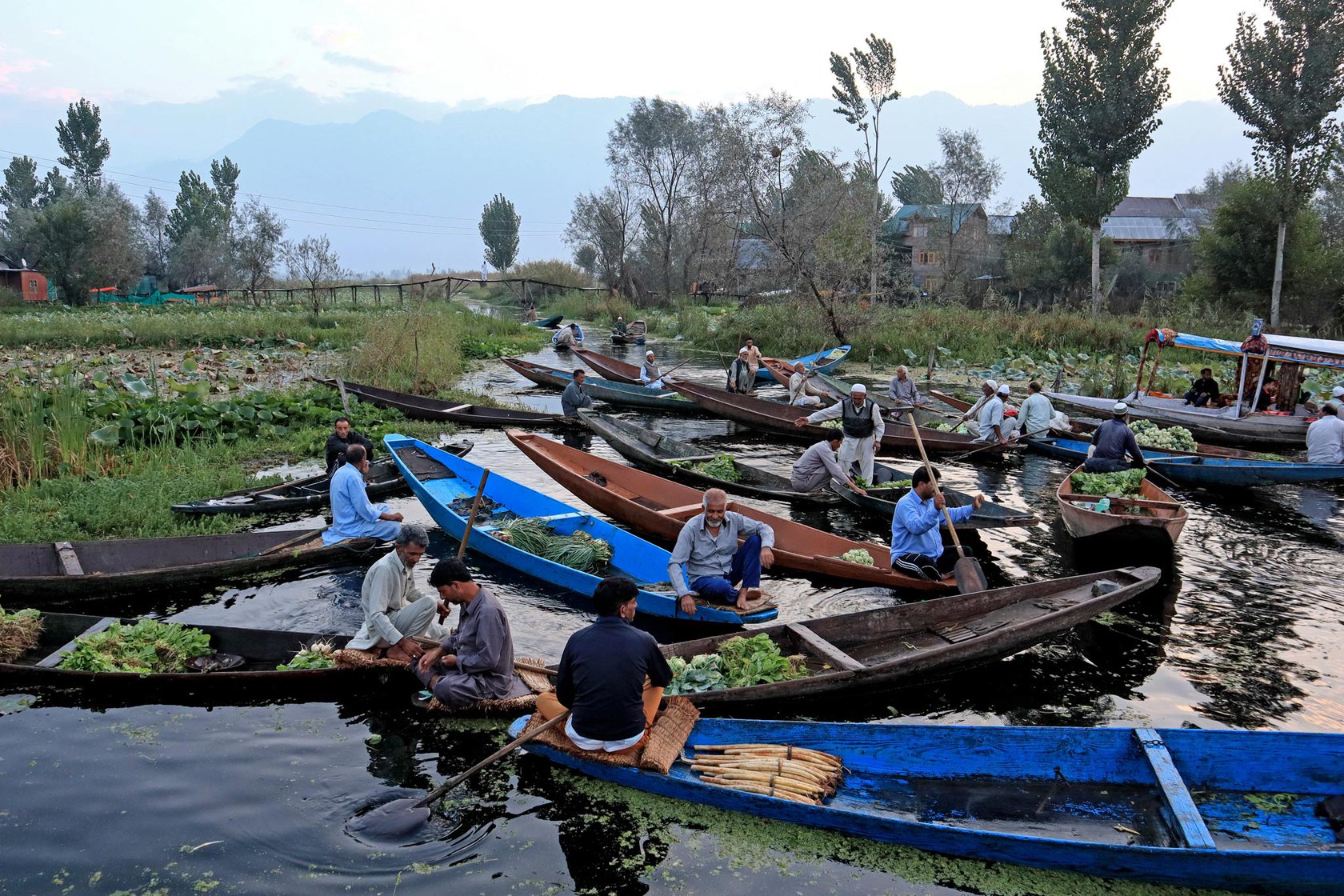 Vegetable vendors at the gudder . Sale and purchase of vegetables take place early in the morning, from 5 a.m. to 7 a.m. in winter and 4 a.m. to 6 a.m. in summer 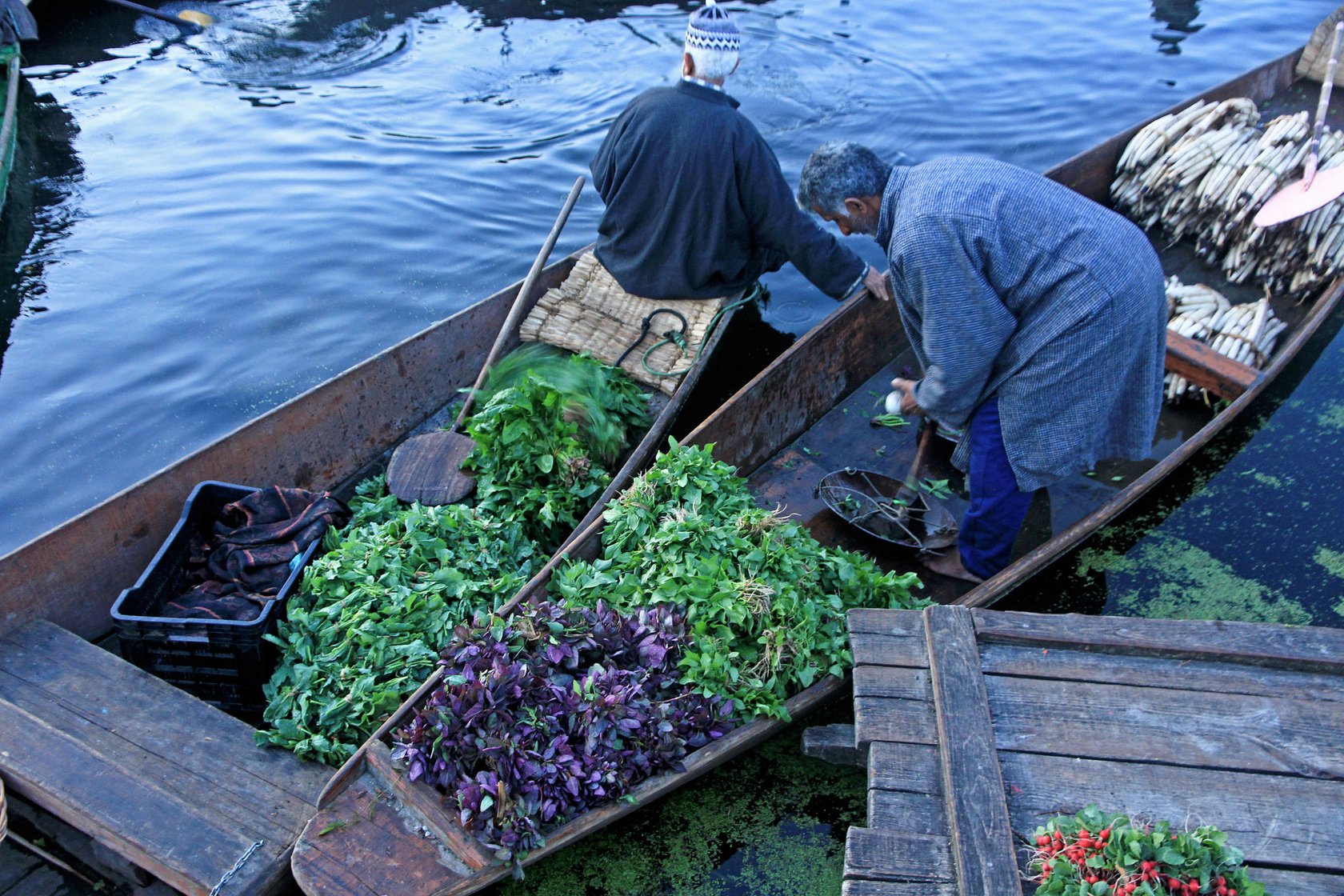 Farmers sell their vegetables to traders from the city, who then sell it at the mandi and to street vendors 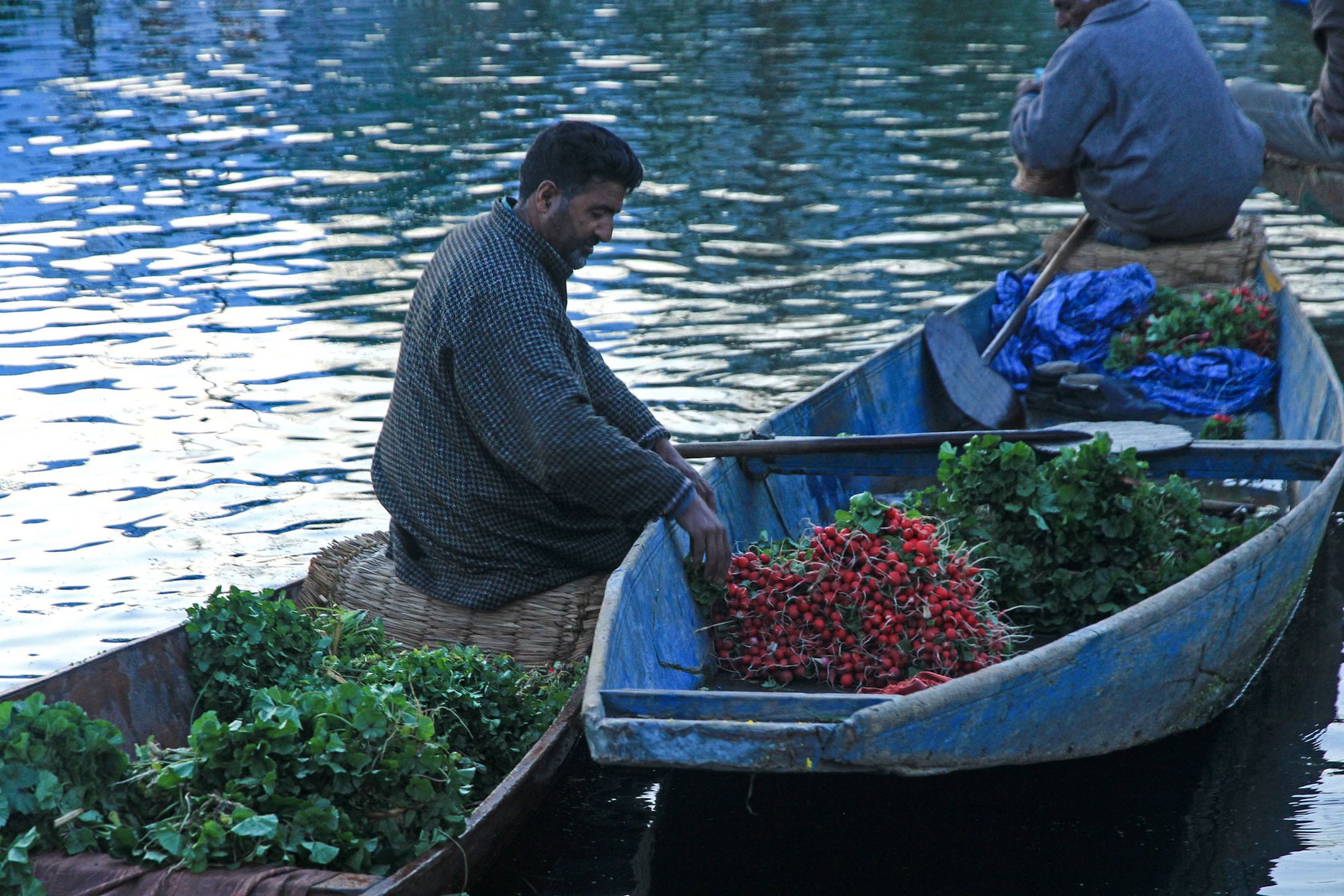