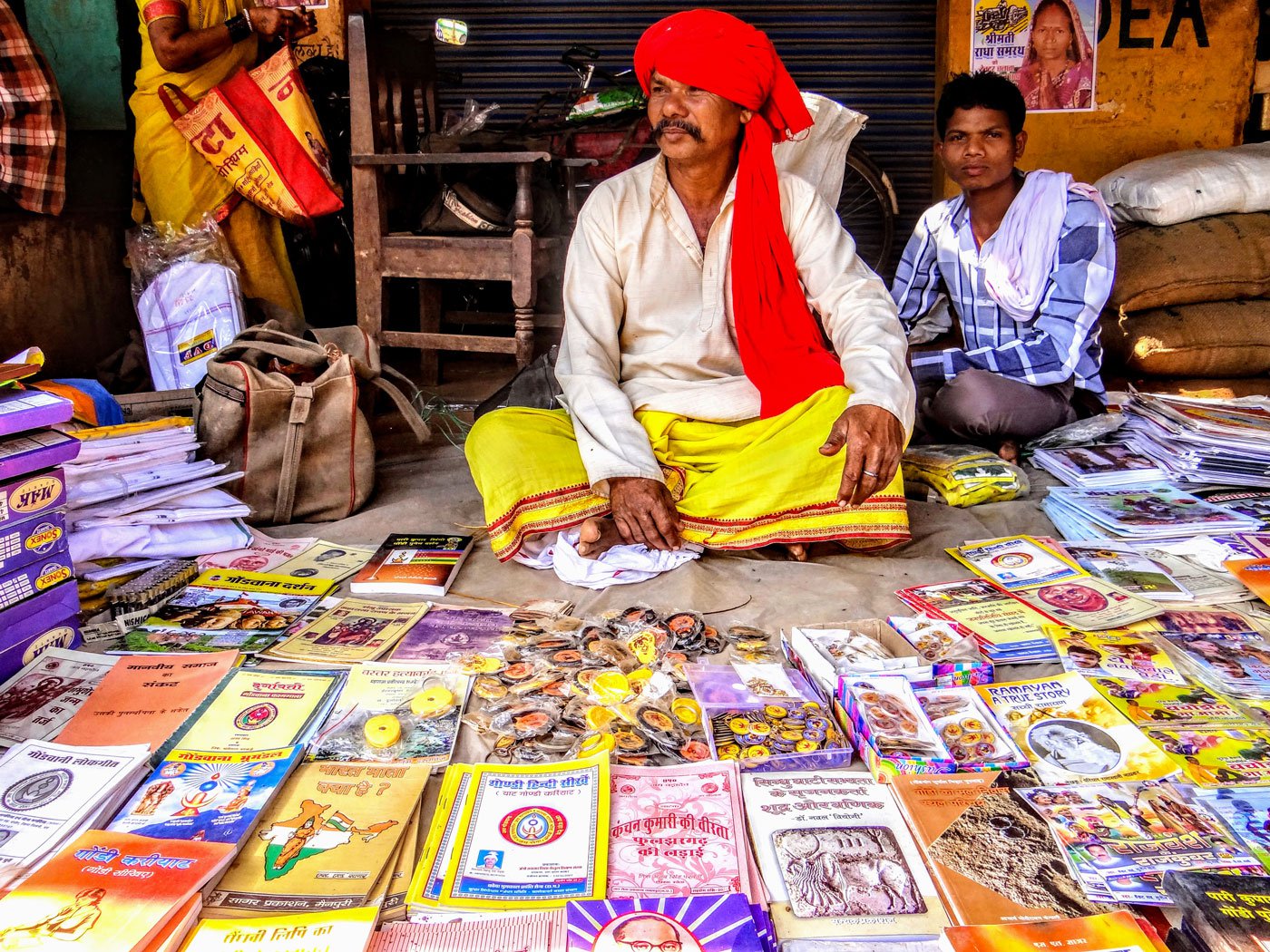 The bookseller of Dhamtari

Rampyari Kawachi cannot read any of the books he sells. But the book vendor from Chhattisgarh's Gond community is on a mission to promote reading and learning in Adivasi communities

ÔÇ£Do you know what makes it possible for us to enjoy our rights and freedoms? It is Bharat ka Samvidhan [the Constitution of India].ÔÇØ Rampyari Kawachi held up the volume for a customer who was browsing through the books in his mobile bookshop. The Constitution was the thickest of the books displayed at his stall in the haat at Ghotgaon village, in ChhattisgarhÔÇÖs Dhamtari district. The weekly market is held about 13 kilometres from his village, Joradabri Ryt, in DhamtariÔÇÖs Nagri block.

Rampyari, who cannot read or write, was explaining the ConstitutionÔÇÖs importance to whosoever came to see his wares that day. Like him, his potential customers belonged to the regionÔÇÖs Adivasi communities, and the bookseller was only too keen to introduce them to the Indian Constitution.

It is ÔÇ£the one holy bookÔÇØ, said Rampyari, that everyone needed to keep at home, and learn from about their rights and duties. ÔÇ£Do you know, we Adivasis and Dalits get reservation [in higher education and government employment] because of the Constitution of India┬á and its provisions, and the fifth and sixth schedules [that protect tribal communities]?ÔÇØ he said to the people at Ghotgaon, who were at the haat to mainly purchase groceries, vegetables and other essential items.

Rampyari Kawachi looks like he could be 50 years old. He belongs to the Gond community ÔÇô the largest Adivasi group in Chhattisgarh, where the Scheduled Tribes are one-third of the population. Most of the books he sells ÔÇô with titles such as Teesri Azadi ki Sinhgarjana ; Birsa Munda: Sachitra Jeevani ; Bhrashtachar ; Hindu Adivasi Nahin Hain ÔÇô are in Hindi. But he also stocks a few books in the Gondi language, and some in English. When someone picks up a title, Rampyari explains its contents, often sounding like a short book review. 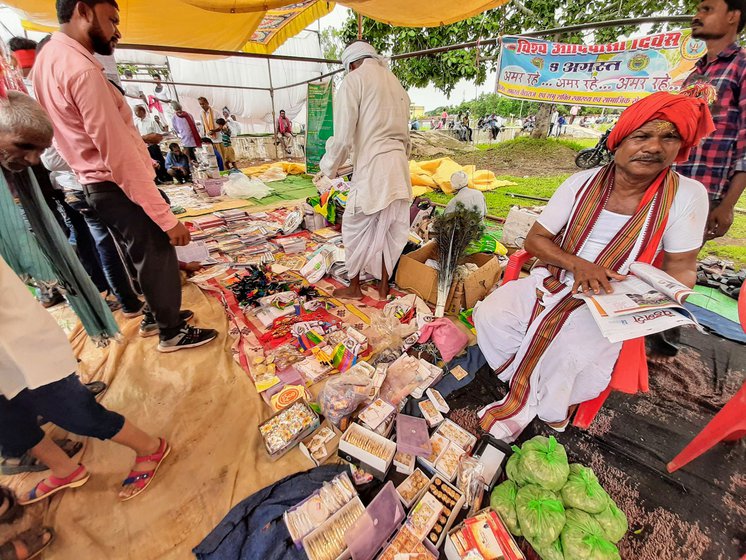 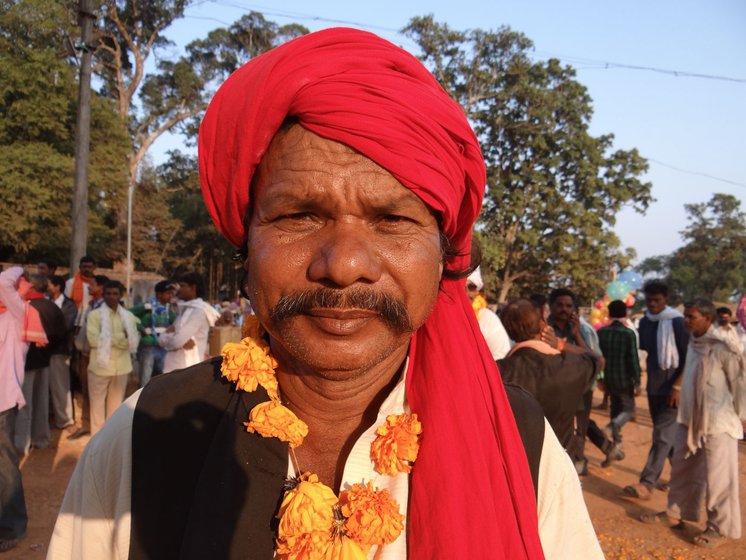 Left: Rampyari Kawachi (right) selling books and other materials during World Tribal Day celebrations in Dhamtari, Chhattisgarh, in 2019. Right: Rampyari loves wearing a red turban when he goes to haats , melas and madais

ÔÇ£I have never been to school; I cannot read and write,ÔÇØ Rampyari tells me. He takes the help of a retired sarpanch in village, Sobsingh Mandavi, who is in his late 60s. ÔÇ£I request him to read the books. He tells me what they contain, which I then explain to the customer. I can't even read the price printed on the book, but once I am told what it is, I don't forget,ÔÇØ he says.

Before he started selling books about 15 years ago, Rampyari worked as an agricultural labourer on othersÔÇÖ farms. Then he started selling seeds and pesticide at the haats . He still sells seeds at the weekly markets in central Chhattisgarh, within 10-15 kilometres from Joradabri Ryt. Seeds of vegetables like okra, tomato, cucumber and beans are laid out in a separate section, next to the books and other items like calendars and clocks.

At first glance, one could mistake Rampyari as just a vendor of┬á books and seeds. But he is much more ÔÇô he says he is a karyakarta , an activist. He started selling books to help the Adivasi people learn about tribal issues and their rights. At the madais (harvest festival) and melas (fairs) where he would go to sell seeds, the debates and discussions about Adivasis' concerns would draw him deeper into thinking about them. He wanted to do more.

ÔÇ£I am creating awareness among fellow Adivasis,ÔÇØ says Rampyari, who also sells interesting and inspiring posters. One of them features Ravan, the mythological character whom the Gond Adivasi regard as an ancestor. ÔÇ£Our people are deprived of education and rights because they are not aware. Though the Constitution gives us strength we are not able to use our rights. We are exploited because of the innocence of our people,ÔÇØ he explains. Besides books and posters, his stall at madais and melas has other items on sale: calendars marking Adivasi events and festivals; the anti-clockwise-moving Adivasi ghadi ; and bracelets and necklaces with Adivasi symbols. 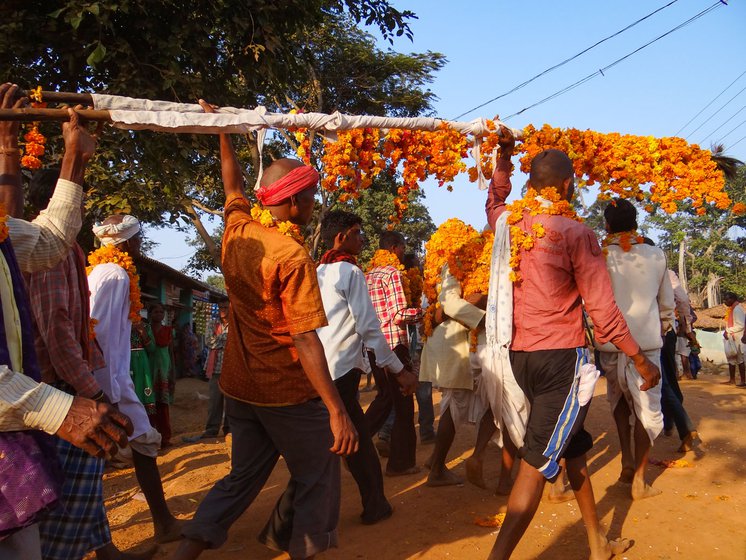 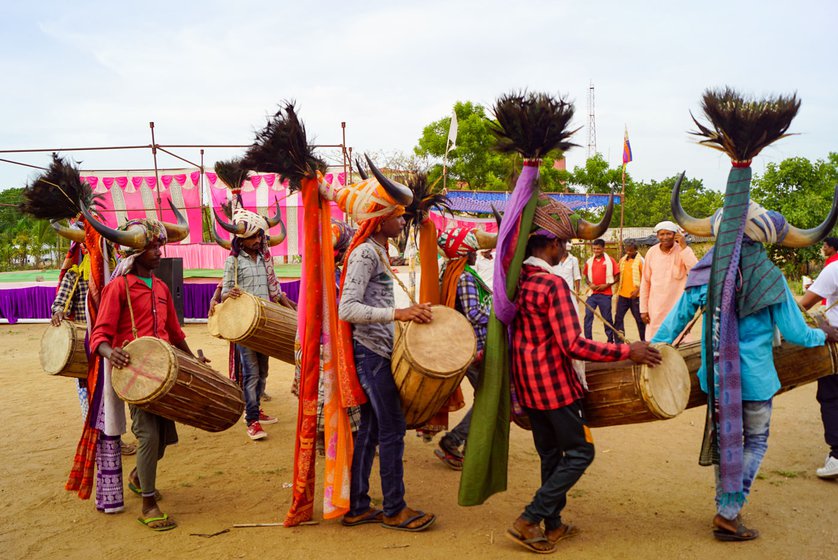 A floral procession (left) for guardian deities at a madai (harvest festival) in Dhamtari. Right: Dhol performers at a mela (right) in Chhattisgarh's Sukma district. Rampyari had set up his stall on both occasions

Rampyari travels the length and breadth of ChhattisgarhÔÇÖs Adivasi belt, including Bastar and other parts of south Chhattisgarh. He even goes to attend fairs and meetings in the neighbouring states of Odisha, Maharashtra and Telangana, taking with him books ÔÇô 400-500 at a time ┬¡┬¡┬¡┬¡ÔÇô and other materials to sell. In the past decade, this reporter has met him on numerous occasions in Chhattisgarh and Odisha.

ÔÇ£Earlier, I used to buy books and distribute them. I might have distributed about 10,000-12,000 books for free,ÔÇØ says the book supplier, who for a long time transported bundles of books on his motorbike. He sources his collection from the cities like Nagpur in Maharashtra, Jabalpur in Madhya Pradesh, and Raipur in Chhattisgarh. He says his income is not fixed, and he doesnÔÇÖt keep a record.

The books are priced between Rs. 10 and Rs. 350. ÔÇ£These books are about our society, so we need to spread it among people. They need to read them. When someone like you [the reporter] asks us questions, we become shy and are not able to speak to you. I realised, it is because our ancestors were denied opportunities that we were not able to speak or raise our voice,ÔÇØ he says.

To make his journeys easier, Rampyari bought a secondhand multi-utility vehicle some years ago. He borrowed money on interest from someone he knew. But during the Covid-19 lockdowns since March 2020, he found it difficult to repay the loan instalments. It is tough even now, he says. 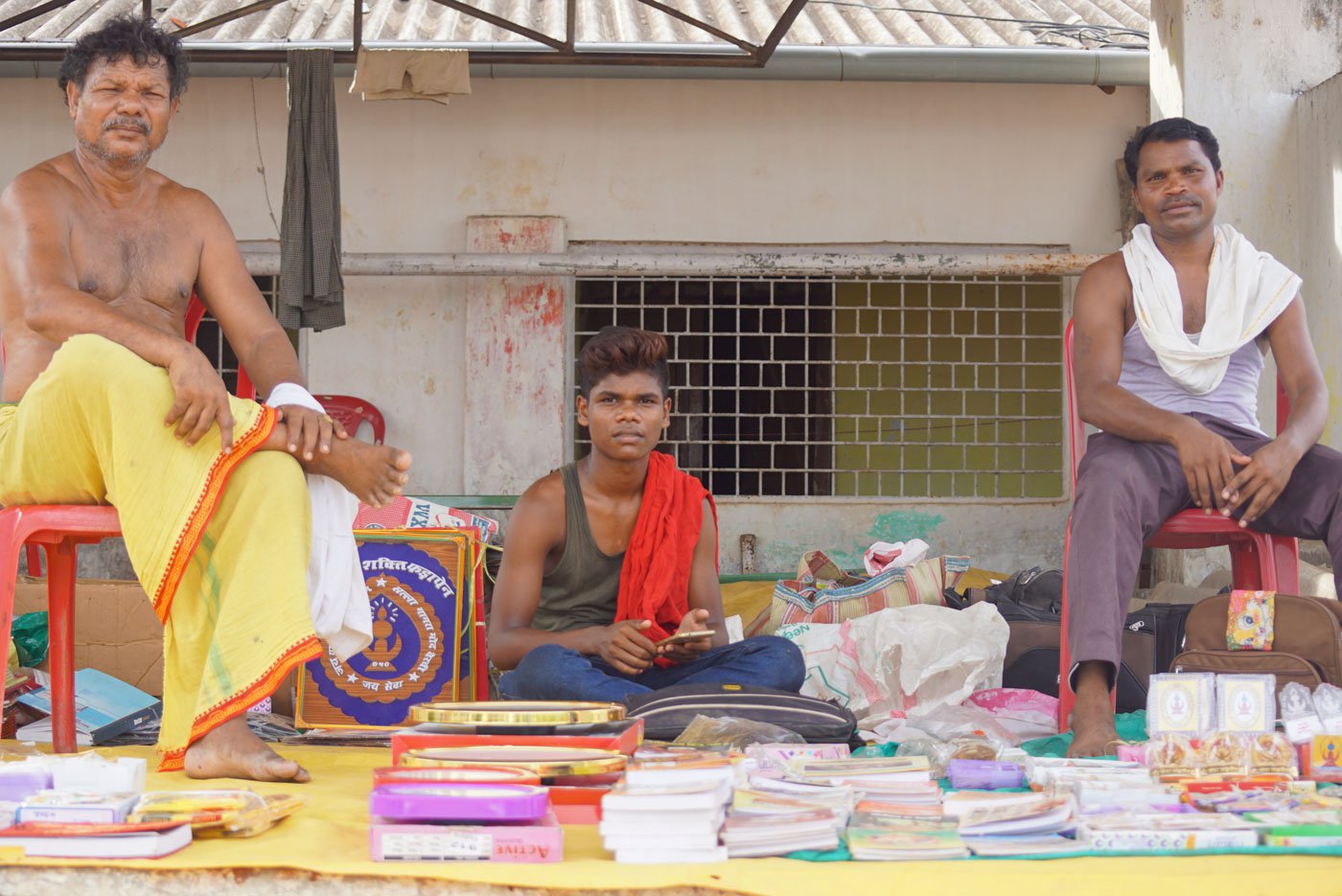 There is no warehouse to store his goods. Rampyari keeps them all at his three-roomed, tile-roofed house in Joradabri Ryt, where he lives with his wife, Prema Bai. Neither she nor Rampyari know how old they are ÔÇô they have no records or birth certificates. When she can, Prema goes with Rampyari to help him with the stall, though she focuses on housework and on cultivating their small patch of land in the backyard.

ÔÇ£I do this work because I get a lot of satisfaction from it,ÔÇØ says Rampyari . ÔÇ£We Adivasi people come together during madais and melas , and celebrate. I can earn anywhere, but in such places, I not only earn some money but I get to do what I live for.ÔÇØ