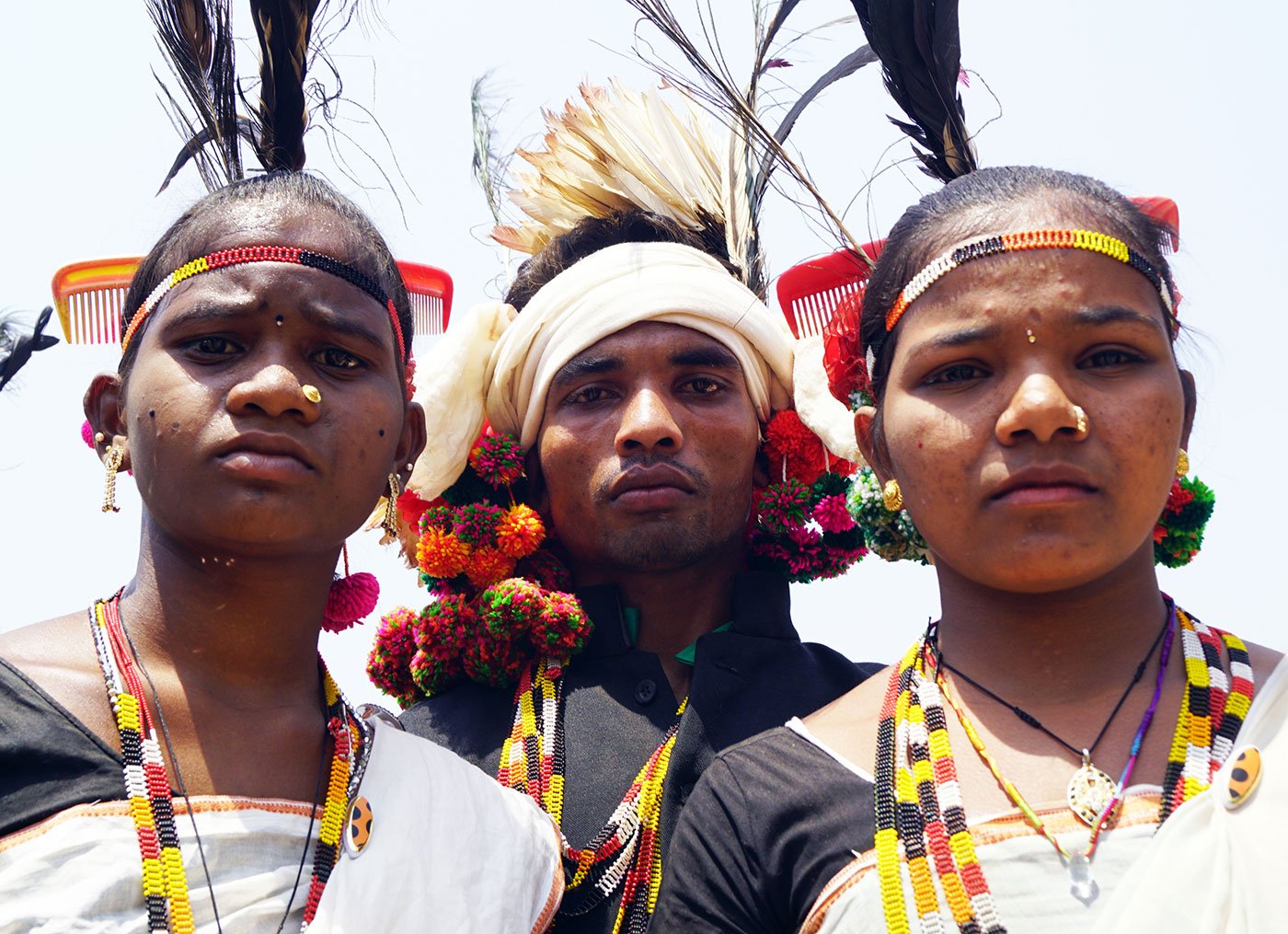 Summit of the ancestor gods at Semargaon

Every four years, Gond Adivasis bring their clan’s deities to a festival in Semargoan village of Chhattisgarh to make offerings to their ancestors, seek their advice and create a space for the ‘deceased’ to mingle too

Once in four years, Gond Adivasis travel long distances to Semargaon, a village of around 200 people in Antagarh tehsil of (Uttar Bastar) Kanker district of Chhattisgarh. They come from the neighbouring districts of Kondagaon and Narayanpur for a jatra (festival) to celebrate their ancestors. The Gonds believe that even after death, community elders continue to exist; they are worshipped as ancestor gods and goddesses who come visiting during the jatra . I attended this festival in March 2018.

Known as the Pahandi Pari Kupar Lingo Karrsad Jatra, this ‘summit of deities’ attracts an estimated 20,000 people over three days. It celebrates Pari Kupar Lingo, the grand old man of Gond mythology. He is the god from whom flow many of the community’s cultural and musical legacies, which give the Gonds a sense of identity.

“Earlier, the jatra was held every 12 years, then every nine years, then every seven years and now every four years,” says Bishnudev Padda, a Gond Adivasi from Khalemurbend village in Kondagaon district, and one of the organisers of the festival. “It had a low profile because of fewer people, but now it is celebrated with more vigour.  Many people gather here after hearing and reading about it,” he adds. Mobile phones and access to motorbikes and shared taxis to reach the venue have helped spread the word and popularity of the festival.

When I ask Bishnudev about what people do at the festival, he says, “Out of a total of 750 gotra s [clans] among the Koya [this refers to indigenous people here, but Gond, Muria and Koya are the same Adivasi group – in Bastar, Telangana and Andhra Pradesh, respectively], around 72 gotras are here in Bastar. People from these clans bring their Mandaku Pens [deities] with them, who meet each other here.” (The gotras are represented by a totem – symbols of different creatures and animals like the goat, tiger, serpent and tortoise. The Gonds worship their totem and help preserve that species).

So who are the Pens? Keshav Sori, a Gond activist based in Kanker town, who works with a non-governmental organisation on livelihood issues, says, “The Pens are our forefathers. For us, elders who are no more are not swargiya [deceased]; rather, they become Pens. We assume that they are still with us and worship them. We also visit the Pens of friends and relatives. The Gonds assemble with their Pens, and everyone speaks to each other and celebrates.”

It is believed that the Pens, the ancestor gods and goddesses, dance, cry and hug each other at the jatra . People come here to share their problems with them and they, in turn, offer solutions. Some Adivasis offer them marigold garlands, and I was told that the Pens love flowers – which are abundantly on sale at the jatra .

Deosingh Kureti, a priest from Ghotia village in Kanker district says, “We carry the anga [deities] and offer our services to Lingo Dokra [ dokra is elder, a term of endearment used interchangeably with deo or god]. We offer him flowers, supari, laali and limboo [betel nut, vermillion and lemons]; we also sacrifice pigs and goats [for him].” Traditionally, people have come to the festival from faraway places, often walking through the night, carrying anga s in wooden palanquins, along with offerings like flowers, chickens and goats. This year, I noticed a few vehicles too on which some people had brought anga s – this seems to be a new development, observes Keshav Sori, with whom I went to the festival.

I ask J.R. Mandavi, around 50, and a government employee,  who has brought his anga on a Bolero, about this. He says, “Although I come from Ghodagaon, our deo is in Telawat village in Kanker district. We used to carry this anga on our shoulders and travel on foot, but since our family has fewer members now, it’s difficult to cover such a long distance [around 80 kilometres]. So we sought the permission of the anga and when Anga Udum Kumari [all angas are related to Lingo Deo] gave us her permission, we brought her here in this vehicle.”

Maituram Kureti from Domaharra village in Kanker district, who has brought his anga to the jatra on his shoulders, tells me, “This is the place of our ancestors. We have brought an elderly mother with us; she is a relative of Lingo Deo. Our deity visits places where she receives invitations [to meet other deities] and invites them to meet her too.”

Before they enter the sacred festival space where Lingo is believed to reside, families rest under the trees. They make rice, vegetables, chicken and other items on wood fires, and drink boiled ragi (millet) water. Ghassu Mandavi from Koliyari village in Kanker district is among them. He says, “We have brought Mood Dokra, the elder brother of Lingo Deo. His younger brother and their sons and daughters are also here . This is an old tradition and Lingo Dokra’s family members assemble here to meet each other.”

In the festival ground, photography and videography are not permitted. In the recent past, Gond culture and tradition have been misrepresented, especially through the visual medium. So they’ve become cautious. I make sure to take photographs only outside the festival ground. 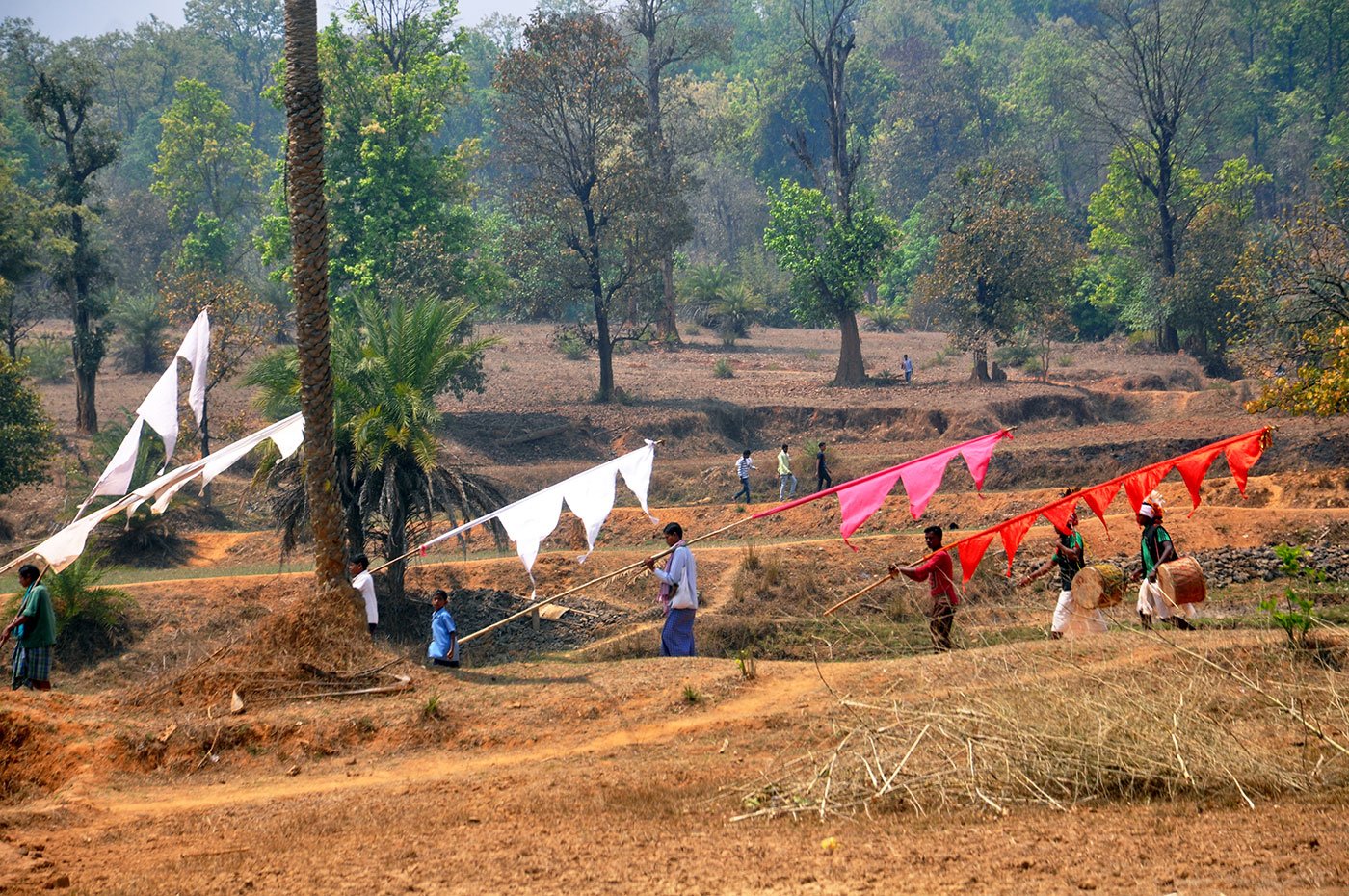 Gond Adivasis from (Uttar Bastar) Kanker, Kondagaon and Narayanpur districts of Chhattisgarh bring to the festival flags that symbolise their ancestor gods, who too, they believe, are here to meet them 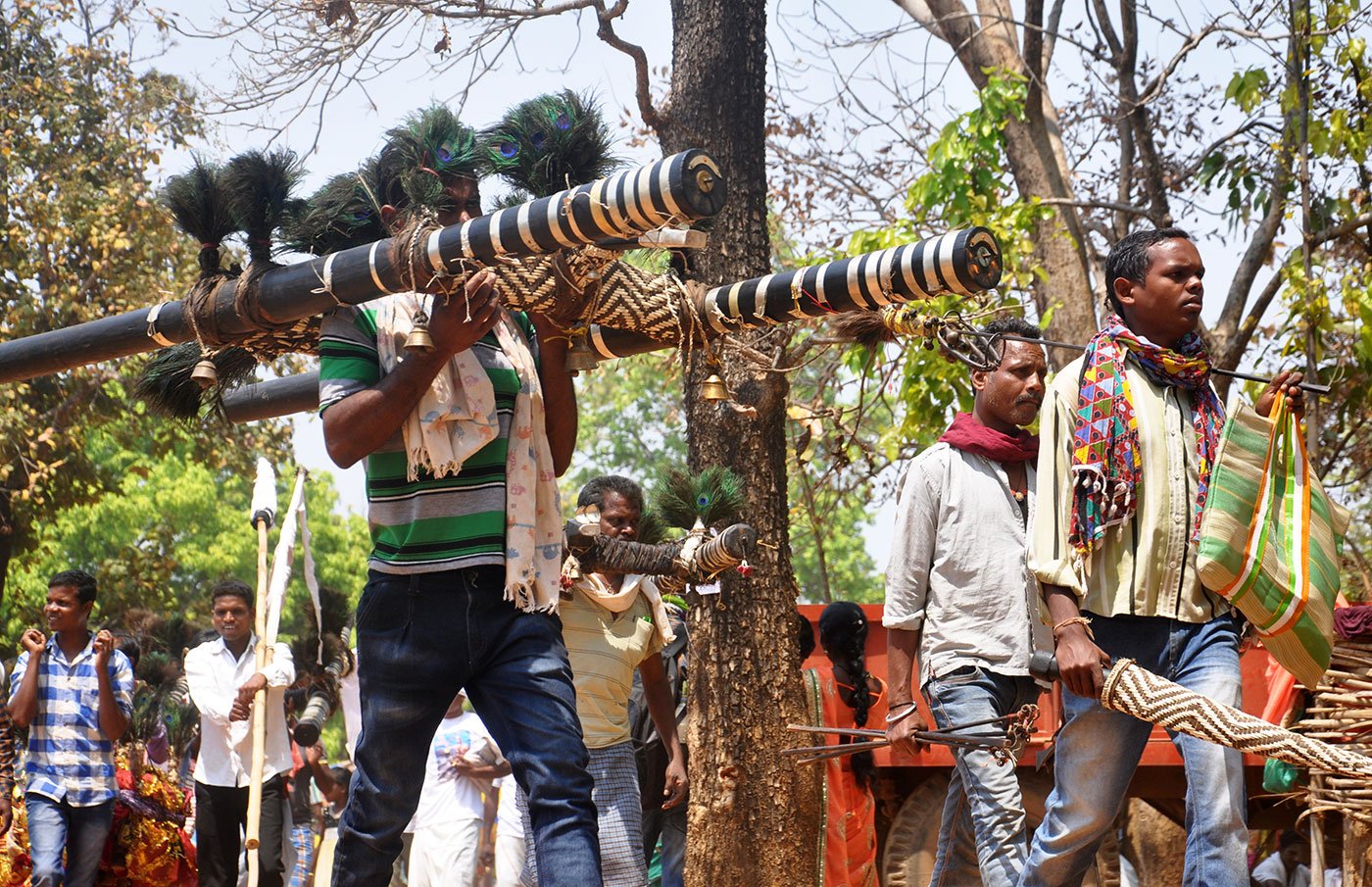 Some devotees walk long distances from their villages – at times through the night – carrying their angas (gods), all related to Pari Kupar Lingo, the 'grand old man' of Gond mythology 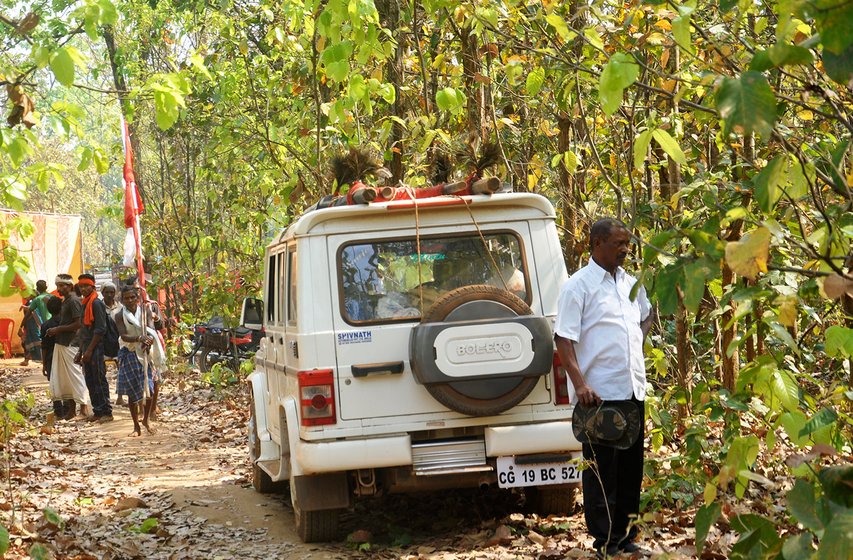 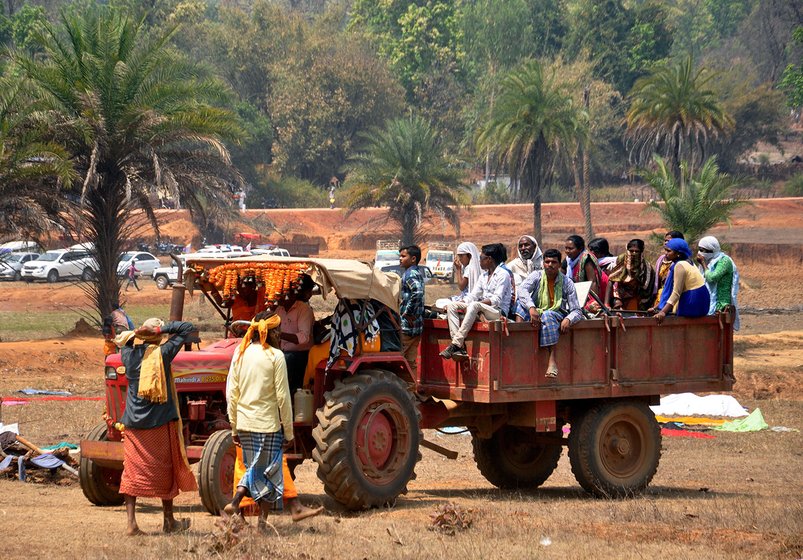 Some families now transport their anga s on vehicles (left), though this is a recent change. Some visitors come to Semargaon tractors, others on foot, bicycles and motorbikes. Mobile phones and access to motorbikes and shared taxis have increased the popularity of the festival 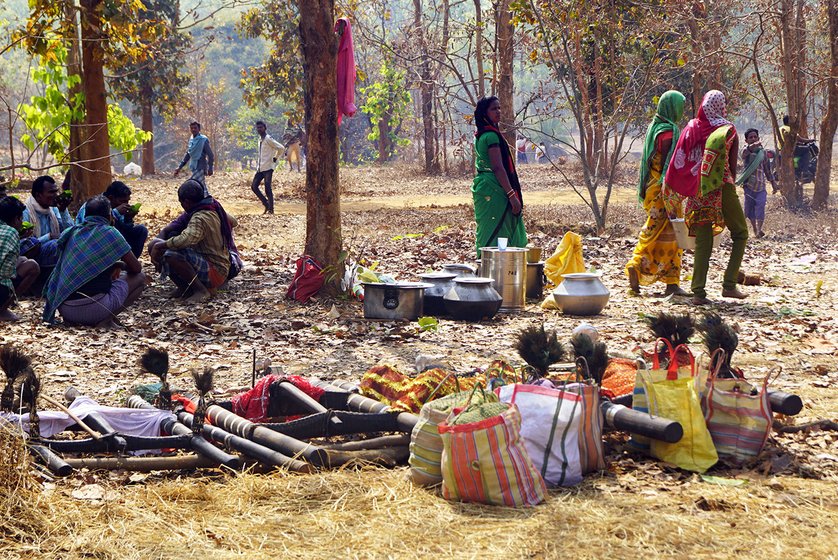 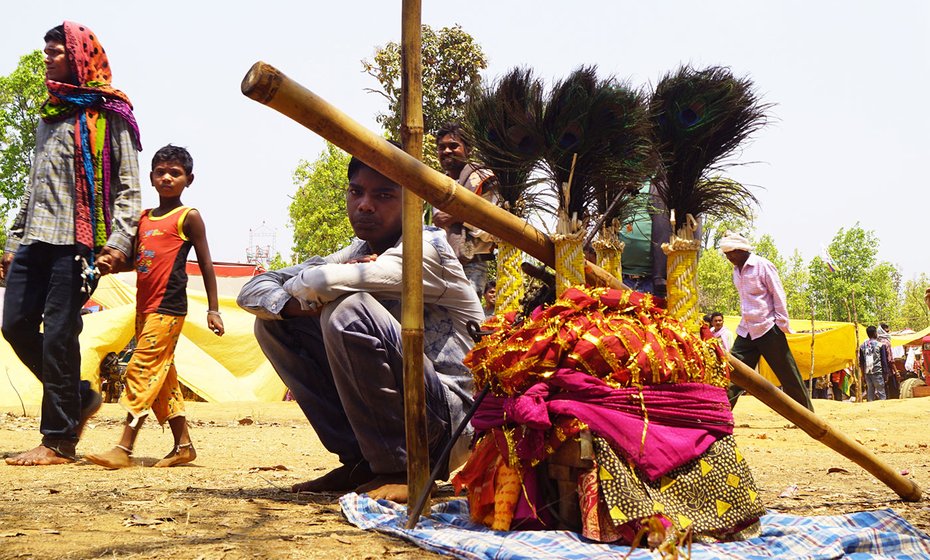 Once the Gonds reach an assembly point, known as Lingo gudi or Lingo’s darbar (shrine) they rest before proceeding to the festival ground 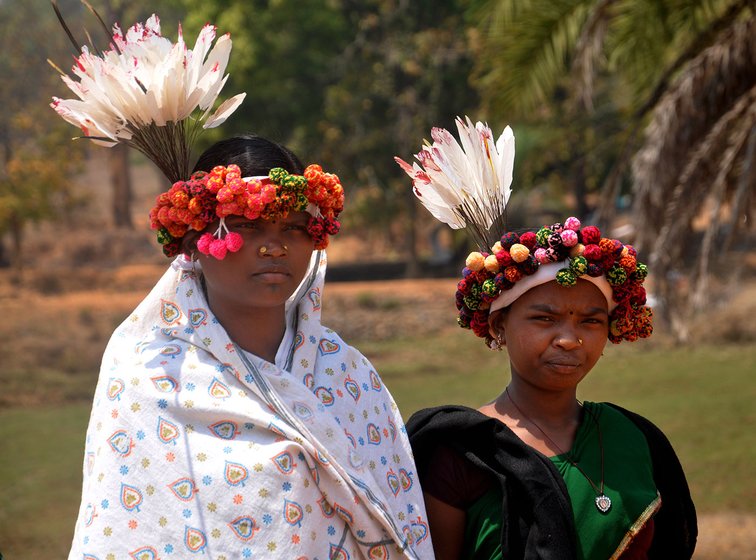 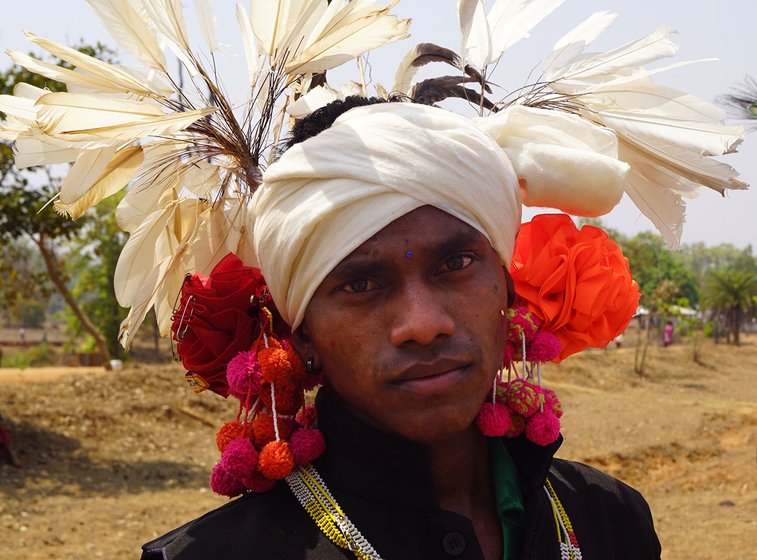 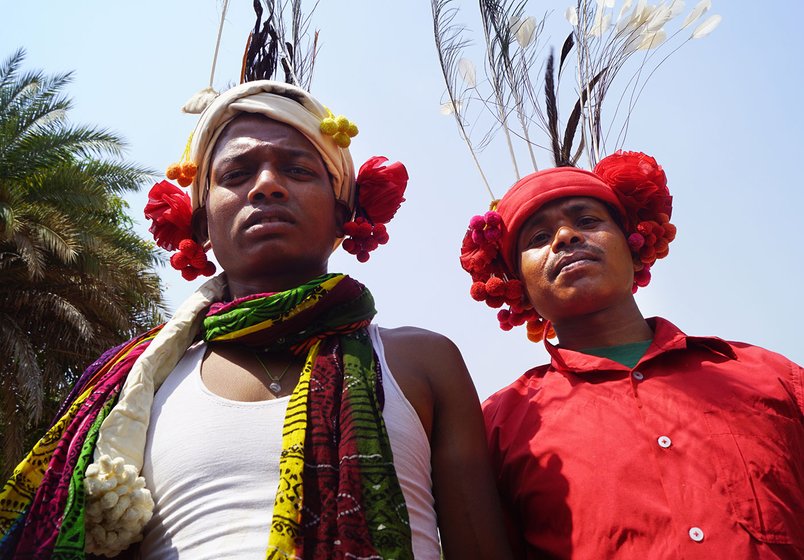 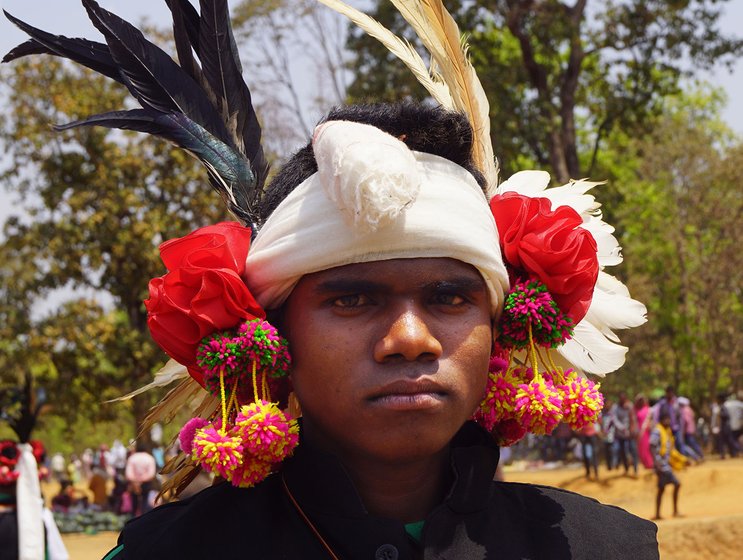 The festival celebrates deeply revered Pari Kupar Lingo, from whom flow many of the community’s cultural legacies 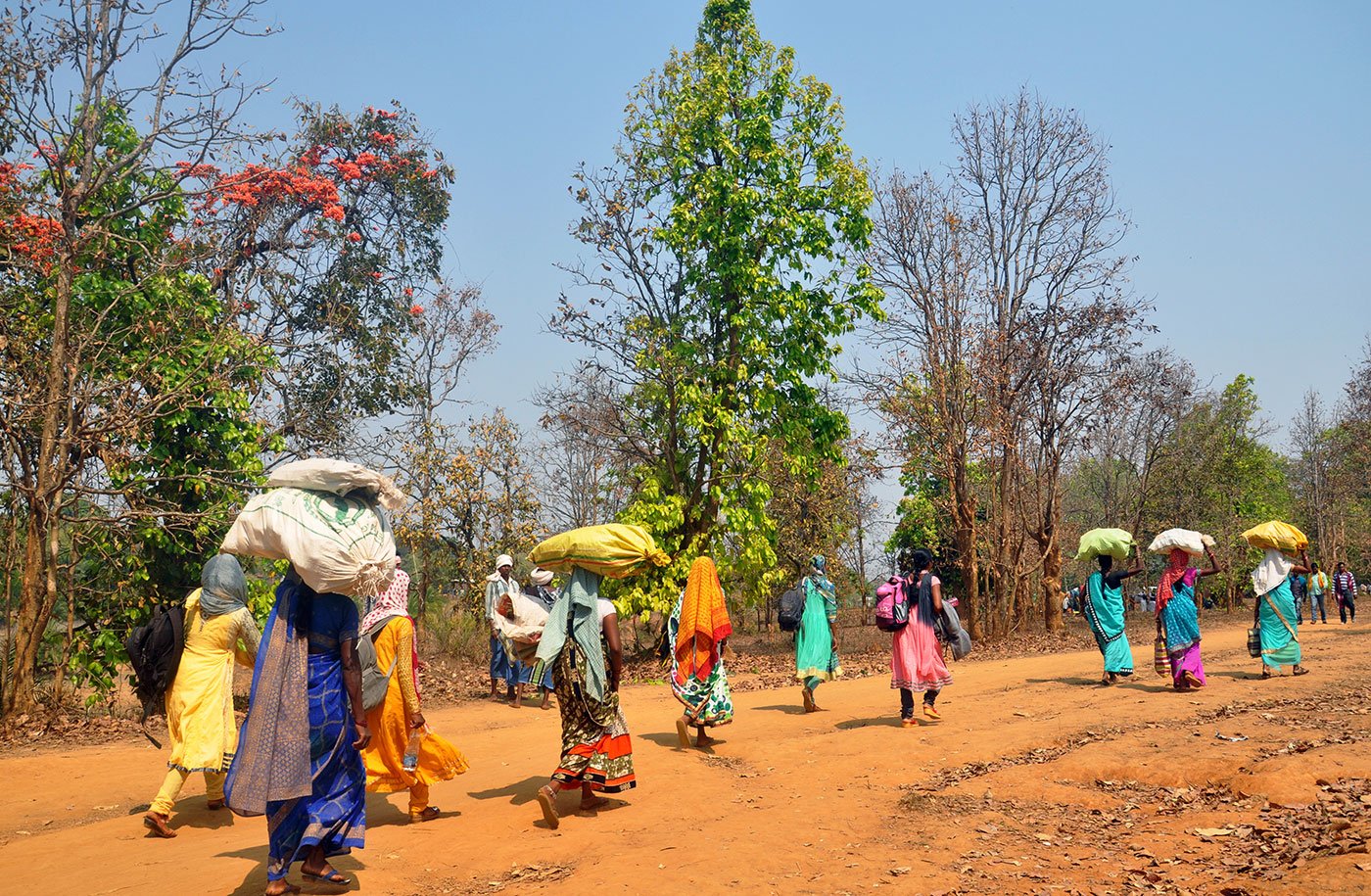 Women carrying headloads are also at the festival; many are part of self-help groups and are here to sell cooked food 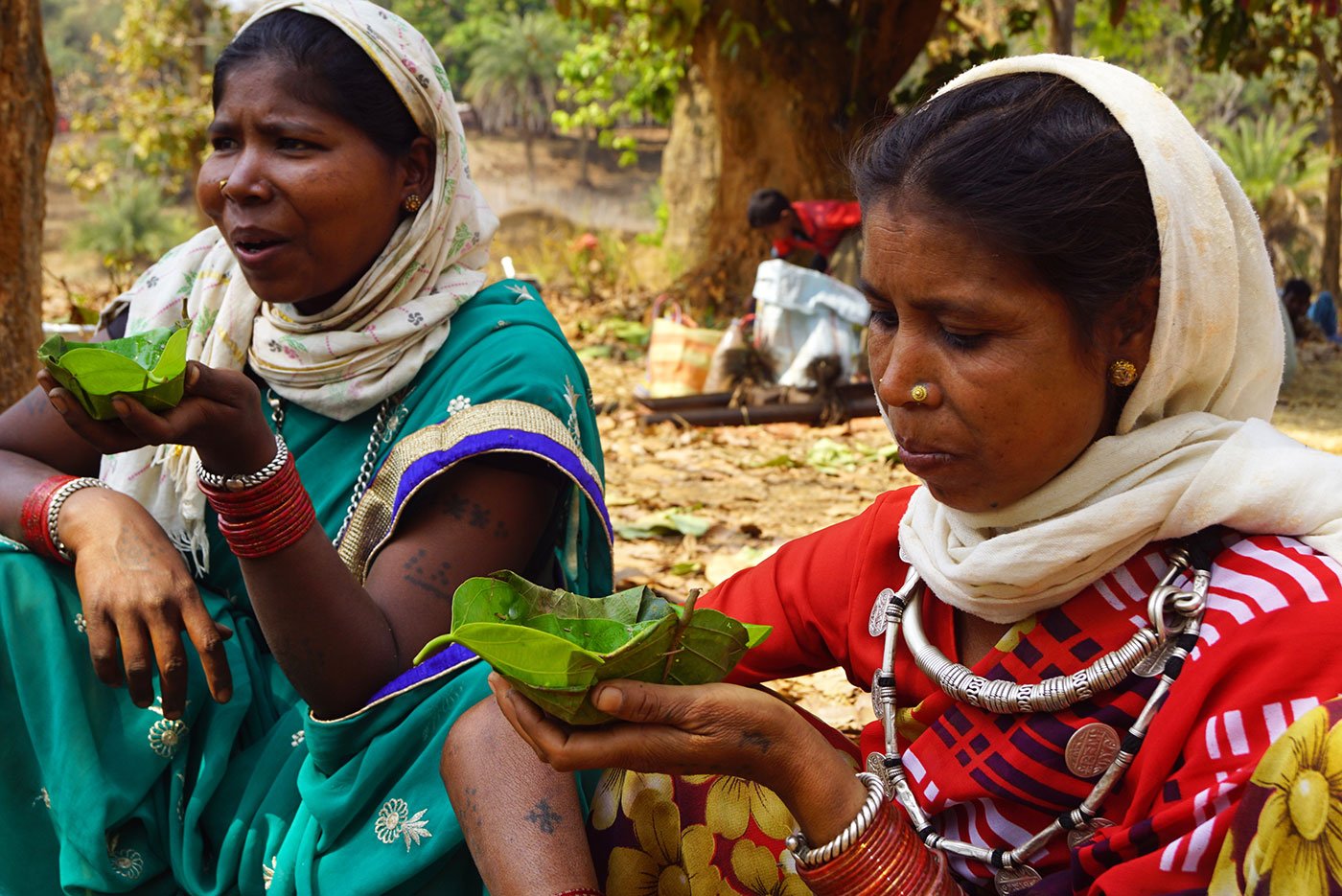 People eat and drink before they enter the festival ground. A popular and cool summer drink is ragi (millet) water 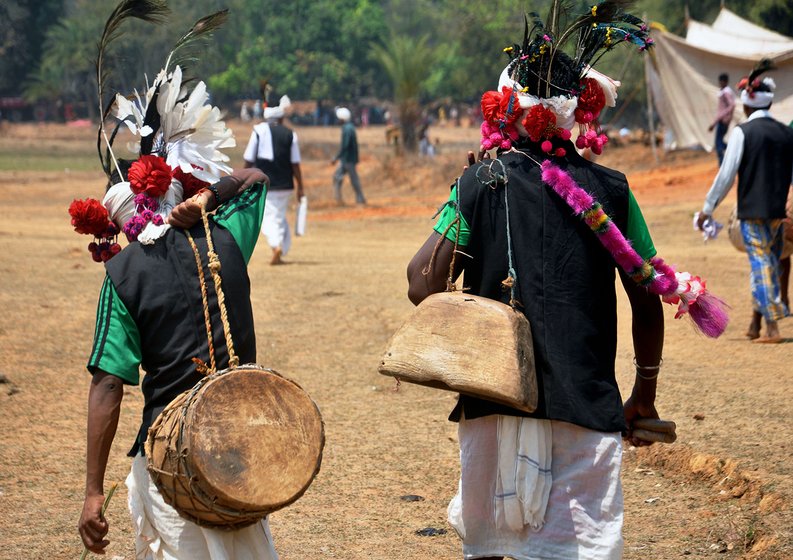 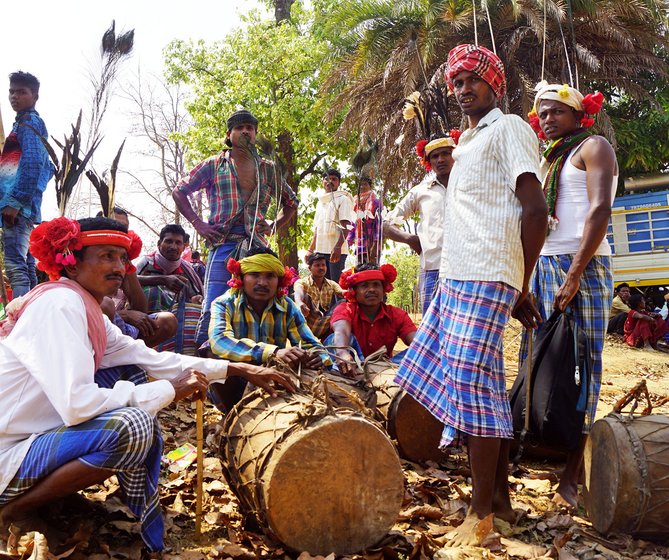 The jatra draws Adivasi dancers and musical troupes from different parts of (Uttar Bastar) Kanker, Kondagaon and Narayanpur districts. Musicians take a break from the performance space, where at a time, only one or two groups can be present, while the other groups wait their turn or take a break 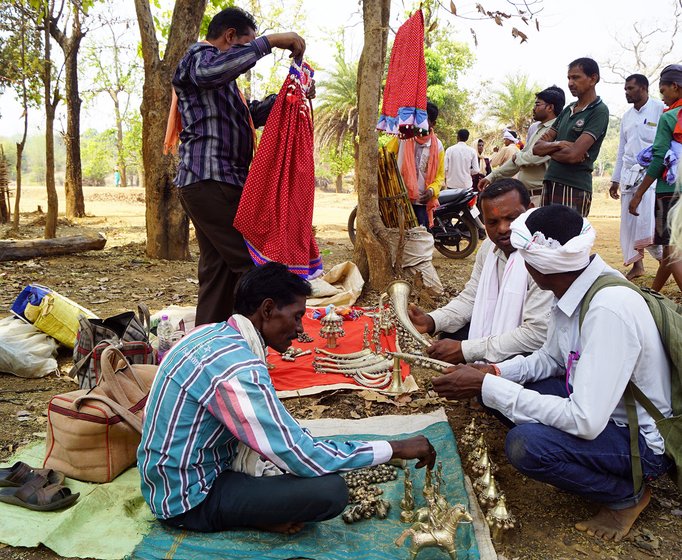 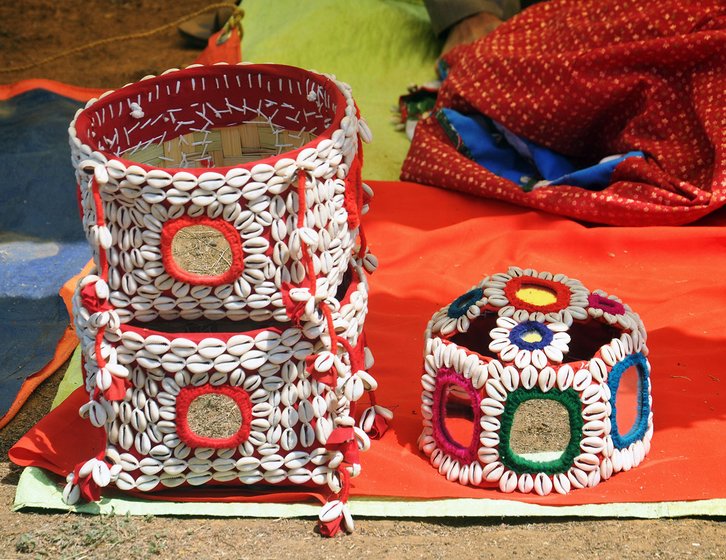 Visitors buy bamboo products, jewellery and other items as offerings to their ancestor gods and goddesses 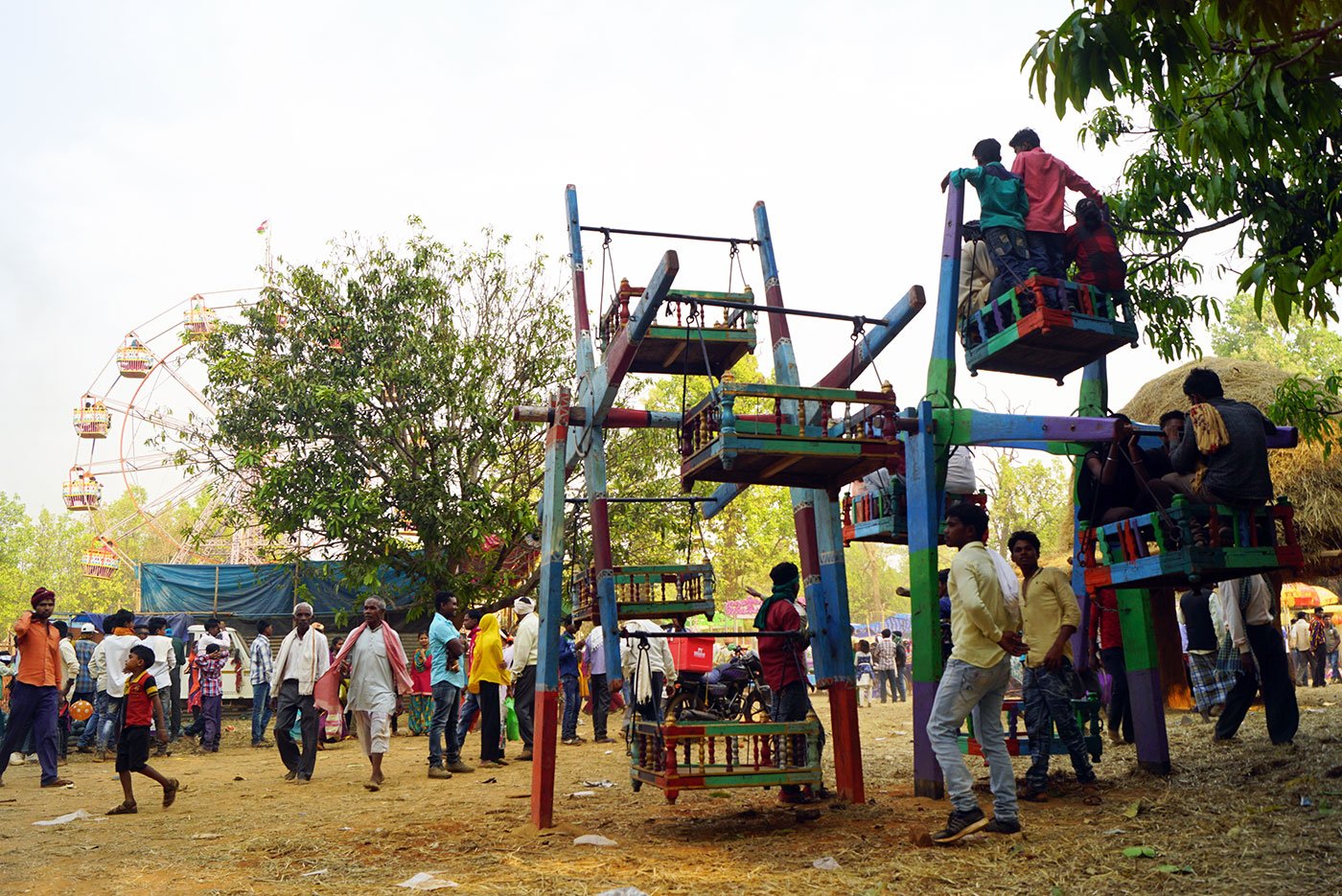 There are ferris wheels here – manually operated as well as motorised. The locals who operate the manual wheels are finding it hard to get customers