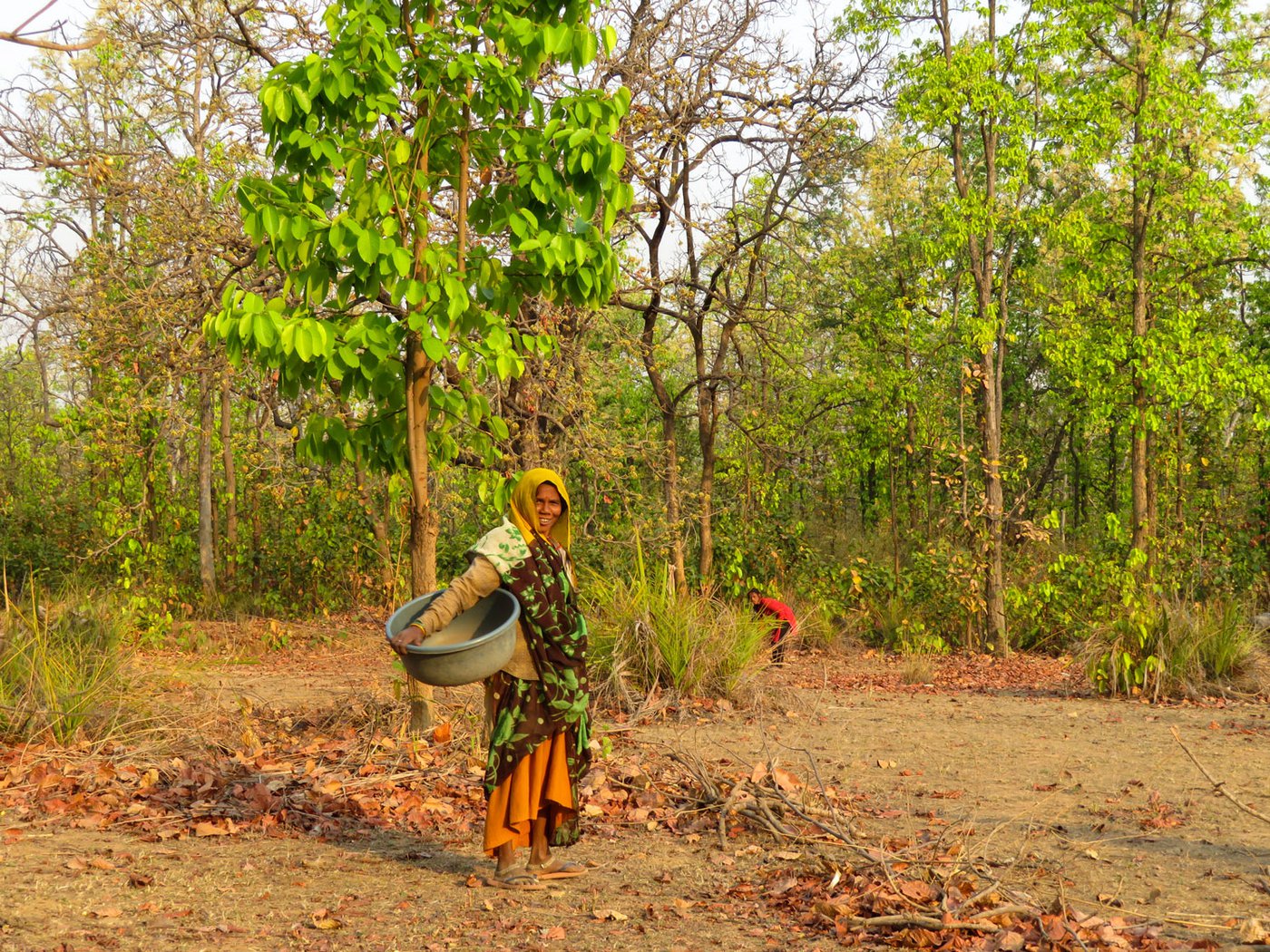 Slowly dropped the mahua in Umaria

Mahua flowers are an assured source of income for people living near Bandhavgarh Tiger Reserve in Madhya Pradesh. But the green blossoms were fewer this season because of poor rain

Sukhrani Singh does not remember a year in which she did not gather mahua flowers from the forest. “From when I was a young girl, I used to accompany my mother to the forest. Now I bring my children with me,” says Sukhrani, 45. She had left home at 5 a.m. to pick the bright green mahua blossoms just as they began to drop off the trees. She was there until noon, gathering the flowers that fell under the rising heat. Once home, she would spread them out to dry in the sun.

Mahua flowers are an assured source of income for small farmers like Sukhrani who live next to the Bandhavgarh Tiger Reserve in Madhya Pradesh's Umaria district. A kilo of the dried flowers earns Sukhrani about Rs. 40 in Umaria market – 30 kilometres from Parasi, her village in Manpur block. She usually manages to gather about 200 kilos in the season, which lasts about 2-3 weeks in April. “The tree is very valuable to us,” says Sukhrani. Besides its flowers, the fruit and the bark of the tree are valued for their nutritional and medicinal qualities.

During the season, Sukhrani returns from the forest by 1 p.m. and cooks and feeds her family that includes her husband and their five children. She steps out again at about 3 p.m. to join her husband in cutting and gathering the wheat harvest. Sukhrani and her husband, who belong to the Gond Adivasi community, own about four bighas of land (roughly one acre), where they cultivate rainfed wheat, mostly for self-consumption. 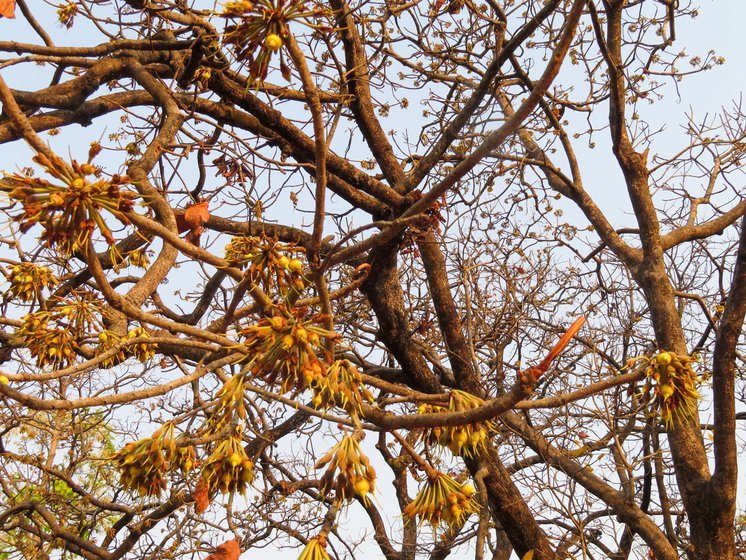 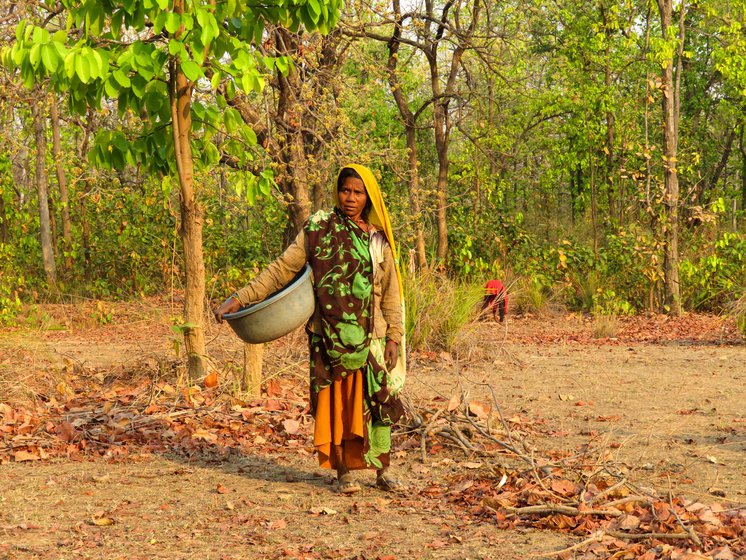 Left: Mahua flowers ready to drop off the trees near Parasi village. Right: Sukhrani Singh near her mahua trees in the buffer zone of Bandhavgarh Tiger Reserve

Surjan Prajapati, a potter in Parasi, also gathers mahua in the forest. “I sell to a trader who comes to the village and sometimes in the haat (local market),” says the 60-year-old, who belongs to the Kumhar caste (listed as OBC in Umaria). “This [ mahua ] is useful. I can’t survive on the money I get from selling pots. When I get back [at noon] I go looking for wage work.” When he runs out of salt or oil at home, he sells a few kilos of the dried flowers to tide over the shortage.

Locals in Umaria say that the mahua would be the last tree in the forest to ever be cut. The district’s Adivasi communities, who revere the tree, believe that it won't let anyone starve. The flowers and fruit are edible, and the dried mahua flowers are ground to flour and also used to make an alcoholic brew.

Communities on the periphery of Bandhavgarh are allowed into the forest to gather mahua flowers, which begin to drop down in early April

Watch the video: ' The mahua flowers are less this year'

Communities on the periphery of Bandhavgarh reserve – which covers 1,537 square kilometres – are allowed into the forest to gather the flowers, which begin to drop down in early April, almost immediately after the festival of Holi. Most of the adults come with young children, who are quick to spot the flowers and gather them in baskets.

The trees are scattered every 100-200 metres in the forest. In the flowering season, each tree is marked with a rag or a cloth hanging from its lower branches. “Every family in the village is allotted a few trees. These allotments were done many generations ago,” says Surjan, adding that sometimes people who can spare the income from a tree will give it to someone in greater need.

Bandhavgarh was designated a tiger reserve in 2007, and the national park – the core zone now – was sealed off from human activities. A buffer zone, with restricted access to people, was created around it. Sukhrani’s family were among the Adivasi farmers who owned agricultural land adjacent to the national park, in what later became the buffer zone. She says they have let that land go fallow in the last decade. “No crop lasts in the jungle. We stopped growing anything inside the forest as we cannot stay there to protect the crops. Monkeys would eat up our chana and arhar crops.” 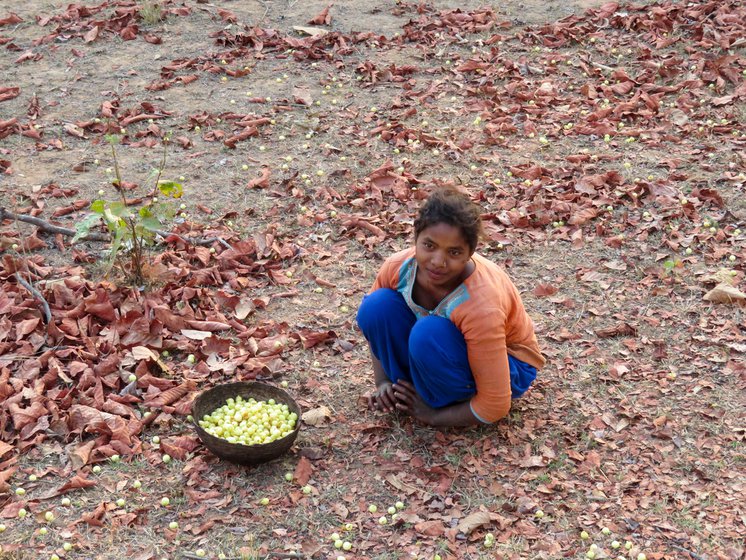 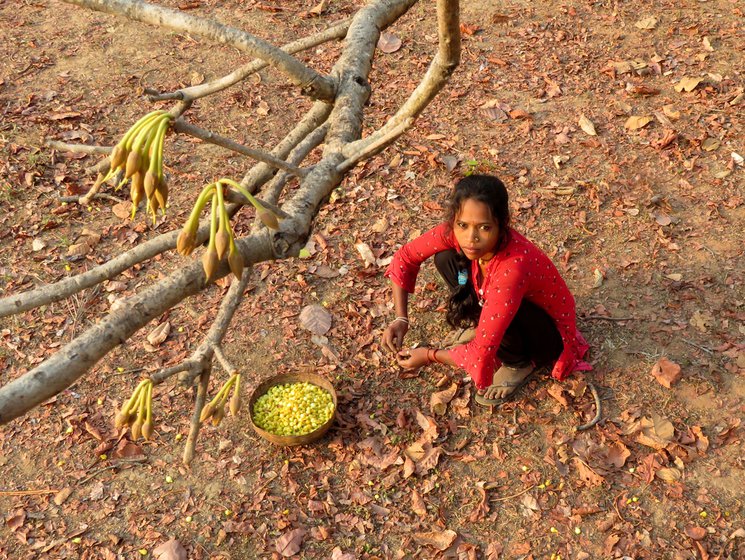 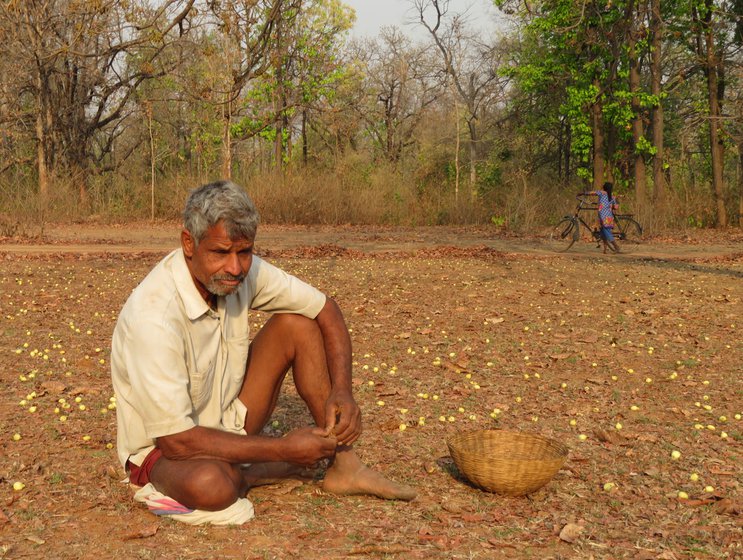 From the left: Durga Singh, Roshni Singh and Surjan Prajapati gathering mahua in the forest next to Parasi in Umaria district

When Bandhavgarh was just the national park, the Adivasi farmers would build temporary shelters during the crop season to ward off animals from their land, but that is no longer allowed. Now they go to the buffer zone only to collect MFP like mahua . “We leave home when it’s still dark, so we all walk together as we are scared of meeting a tiger alone,” says Sukhrani. Although she’s never encountered one, she says, she knows they are around.

At 5:30 a.m., even before the rays of the sun have reached the forest floor, the mahua pickers are already at work, sweeping up the dry leaves under the tree. “The flowers are heavier, so they stay on the ground when we sweep up the leaves,” explains Roshni Singh, Sukhrani’s 18-year-old daughter. Roshni finished school in 2020 and was hoping to sign up for college, but Covid-19 struck and so she put her plans on hold. In Parasi – where Adivasis are 23 per cent of the population of 1,400 – the literacy rate is less than 50 per cent (Census 2011). But Roshni, a first-generation learner, is determined to be the first in her family to go to college.

The nip in the early-morning air is not helping the flower gatherers. “When our hands are cold it’s difficult to pick the small mahua flowers [off the forest floor],” explains Durga, Sukhrani’s 17-year-old niece, who has come along. “It’s a Sunday, so I don’t have school and have come to help my aunt,” she adds. A student of Class 11 at the government high school in Dhamokhar, about two kilometres from Parasi, she studies History, Economics, Hindi and Art. Her school, which was shut through the lockdowns last year, reopened only in January. 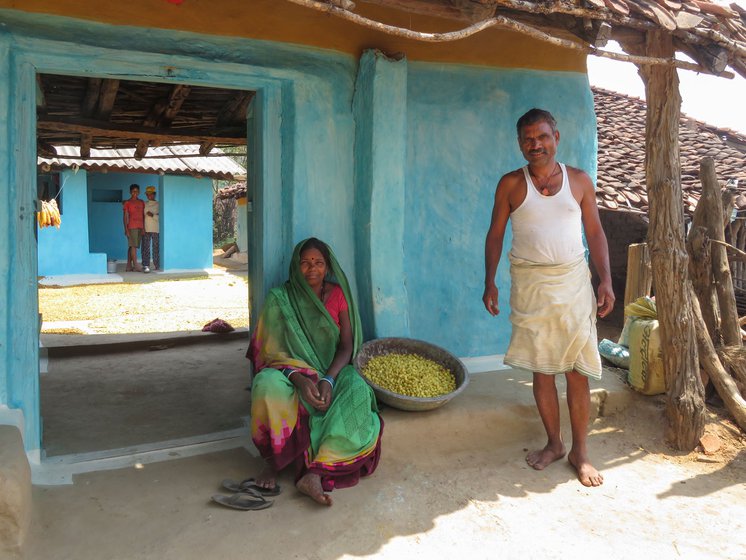 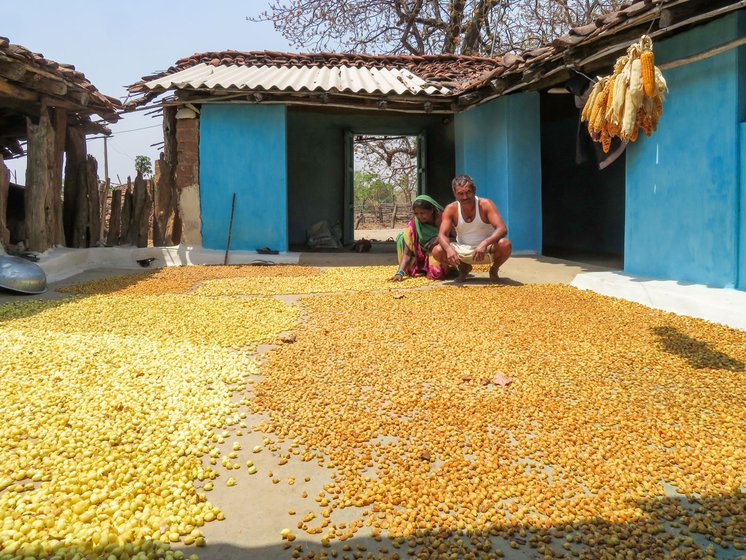 Left: Mani Singh and Sunita Bai with freshly gathered flowers. Right: Mahua flowers spread out to dry in their home in Mardari village

Looking up at the towering mahua tree above her, Sukhrani shakes her head and says, “This year we will not get much [yield], not even half of what we normally get.” Her dire estimate is echoed by Surjan, who says, “The flowers are hardly falling this year.” They both blame the poor rains in 2020 for the decreased yield. But Surjan, who has seen more seasons of mahua , shrugs it off as the odd bad year, saying, “The yield will be less at times, and sometimes more. It can’t always be the same.”

Six kilometres from Parasi, on another side of the tiger reserve, mahua flowers lay drying in the sun-drenched courtyard of Mani Singh’s house in Mardari village. From bright greenish yellow, the flowers were turning a rusty orange. Mani and his wife, Sunita Bai, both in their 50s, had spent the morning gathering the flowers from their five trees in the forest. Their children are grown up and busy elsewhere, so just the two of them go. “This year there are not many flowers to gather. We have to really search for them. Last year I got roughly 100 kilos, but this year I don’t think I’ll get half of that,” he says.

Mani mixes mahua flour with straw and feeds it to his two oxen that plough his acre of land. “It makes them stronger,” he says.

Mardari is a small hamlet of 133 households, and in almost every home, mahua is spread out to dry and then collected into sacks. It is past noon when Chandabai Baiga returns home with a gaggle of young children – hers and her relatives' – each one carrying a basket of flowers they have helped pick. She hustles them along to wash up for lunch before she settles down to talk. 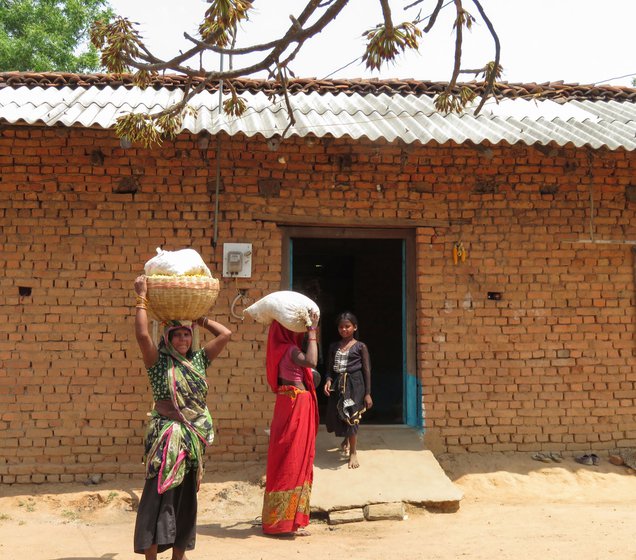 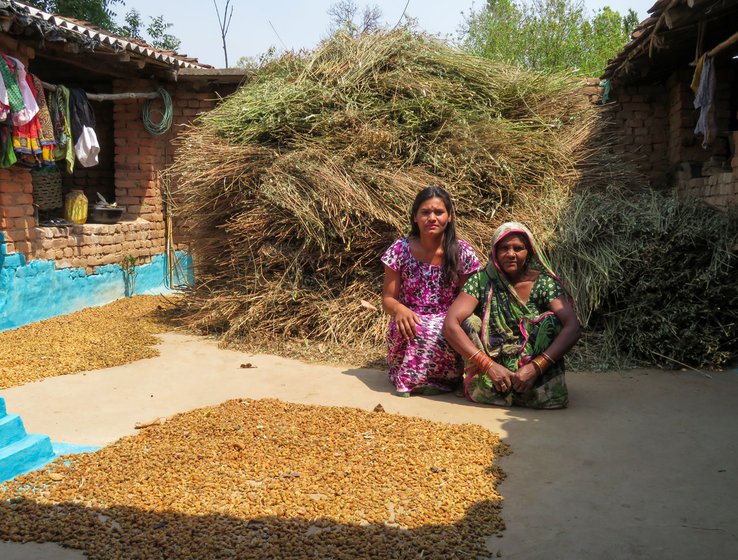 Left: Chandabai Baiga (in the green saree) and her relatives returning from the forest after gathering mahua . Right: Dried flowers in Chandabai's home

Chandabai and her husband, Vishwanath Baiga, who belong to the Baiga Adivasi community, are both in their 40s. They cultivate 2.5 acres of land on which they grow mostly rice and arhar dal , but they also go for MNREGA work when they can get it.

“We won’t be getting much mahua this year. It didn’t rain much so the flowers are less,” says Chandabai, tired from her morning exertions. Anxious about the shrinking yield she also blames it on the growing deer population. ”They eat everything, especially what falls at night, so we have to go early to beat them to it. It’s not just my trees, it’s true for everyone.”

A month later, in May, speaking on the phone from Mardari, Chandabai confirms her fears. “This year, the picking was all over in 15 days. We only got around two quintals [200 kilos] while last year we got more than three quintals,” she says. But she is comforted by the rise in price – due to less supply – from Rs. 35-40 per kilo in 2020 to Rs. 50 this year.

The yield was less in Parasi too, as predicted by Sukhrani and Surjan. Surjan had explained it philosophically: “Sometimes your stomach gets enough food and sometimes it doesn’t, right? It’s the same thing.”

The author would like to thank Dileep Ashoka for his generous help in reporting the story.