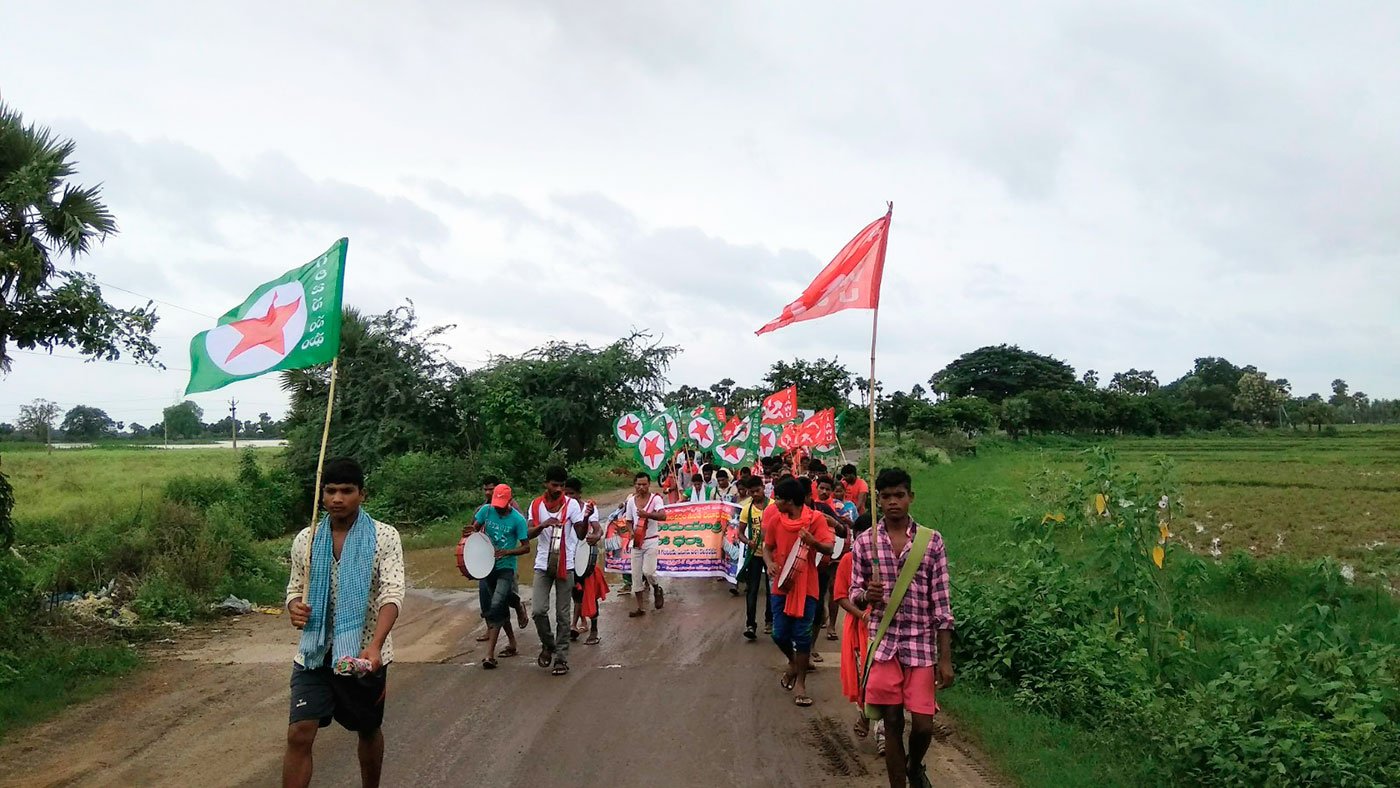 From July 10 to 16, a determined group of Adivasis marched from Cheeravalli village in West Godavari district to Eluru, protesting against the Polavaram project, which will displace and destroy their communities

‘ We are Adivasis, children of the forest
We live in the hills and stream, we are called girijans
We are the ones who live on the riches of the forest…
If we face difficulties, we adjust
If we face losses, we still manage to survive’

Sings 15-year-old Korasa Aditya, beating the dappu as he marches along with other Adivasis, clad in a blue kurta with a green band on his forehead and a red kandua across his waist.

His feet are blistered and there is intense pain in his left knee. That doesn’t deter him. “I was given some medicines and ointment yesterday [by the organisers of the march] after which things became a little better,” says Aditya, who is in Class 9 at school in Ganapavaram village of Buttayagudem mandal . He has walked barefoot after his chappals tore halfway into the long journey.

He and around 500 other Adivasis – most of them from the Koya and Kondareddi communities – started a march on July 10 at Cheeravalli village in Kukunoor mandal of West Godavari district; by the time they reached Eluru, the district headquarters, on July 16, the organisers say the numbers had grown to 1,500. I walked with them for the last two days, from Denduluru to Eluru. Some of the marchers told me they were inspired by the Long March, mainly by Adivasi farmers, in March 2018 in Maharashtra, from Nashik to Mumbai. 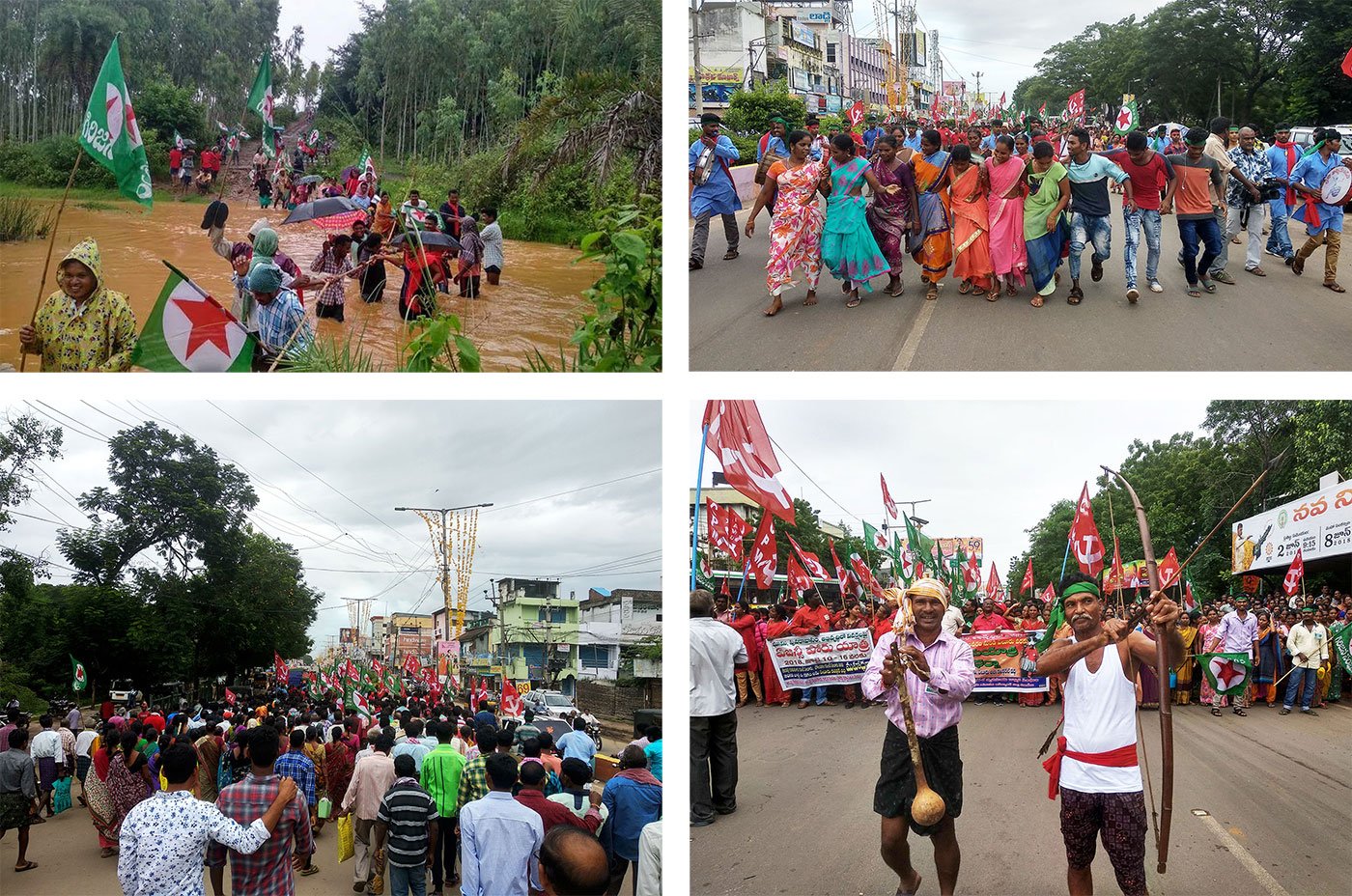 After passing through 200 villages, the march ended in Eluru, where the Adivasis sang, danced, and presented their demands to the government – hoping to be heard

The organisers called this march, this padayatra , the Agency Poruyatra. ‘Agency’ is the local term for a Fifth Schedule Area – predominantly tribal regions where the Constitution of India grants special attention and rights to address historical and economic imbalances. ‘ Poru ’ means ‘war’ in Telugu.

The Fifth Schedule Area of West Godavari district in Andhra Pradesh is spread across eight mandals – two of these will be fully submerged, the other six partially, by the Indirasagar (Polavaram) Multipurpose Project and the Jalleru reservoir (part of the Chintalapudi Lift Irrigation Scheme), both on the Godavari river. The Polavaram project was started in 2004 and the government claims it is 60 per cent complete; the Chintalapudi scheme was inaugurated in 2014 and no construction has started so far.

The Polavaram project will submerge around 200 villages in West Godavari district and displace over 100,000 people. The Jalleru reservoir will submerge 16 tribal hamlets completely and 127 partially. These numbers are from the Department of Environment, Forests and Climate Change, in response to a Right to Information (RTI) application I filed in June 2017.

This week, the Adivasis living in many of these hamlets and villages covered a total of 300 kilometres, passing through more than 200 villages and hamlets, at times in heavy rains and overflowing streams.  The march culminated in a meeting and dharna in front of the district collectorate in Eluru.

‘We walked barefoot in complete darkness, in waist-deep water, in mud in which we sank till our knees, in forests and in fields…’

On July 16, the leaders of the groups that organised the padayatra – the Andhra Pradesh Girijana Sangham (APGS), the All India Agricultural Workers Union, and the Andhra Pradesh Project Displaced Peoples’ Union – met the district collector and submitted a memorandum with a list of 22 demands.

The most important demands include recognising the forest rights of the Adivasis according to the Forest Rights Act (FRA), 2006; proper rehabilitation and resettlement of the people displaced by the Polavaram dam and Jalleru reservoir according to the Land Acquisition, Rehabilitation and Resettlement (LARR) Act, 2013; and proper implementation of the Land Transfer Regulation (LTR) Act of 1970 and the Panchayats (Extension to the Scheduled Areas) Act (PESA), 1998.

The FRA says forest rights should be recognised and the loss of the land compensated before land is taken away from Adivasi communities, who are traditionally dependent on forests for their living. They cultivate on forest plots and also sell forest produce like tamarind, honey and bamboo. The FRA says these traditional rights should be recognised by giving Adivasis individual titles for the cultivated land and community titles for the common forest produce tracts. The LARR and PESA mandate gram sabha (a full village meeting) resolutions before land can be taken away from tribals, and say that in the process, both individual and community forest rights must be recognised. And the LTR does not allow the transfer of land from Adivasis to non-tribals. 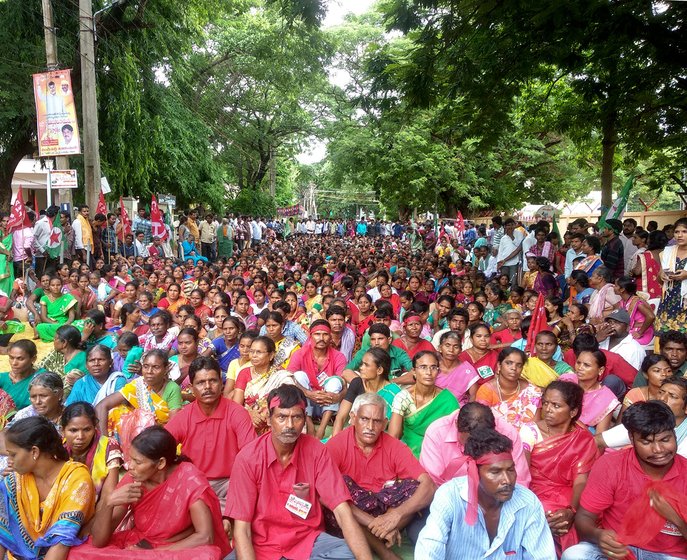 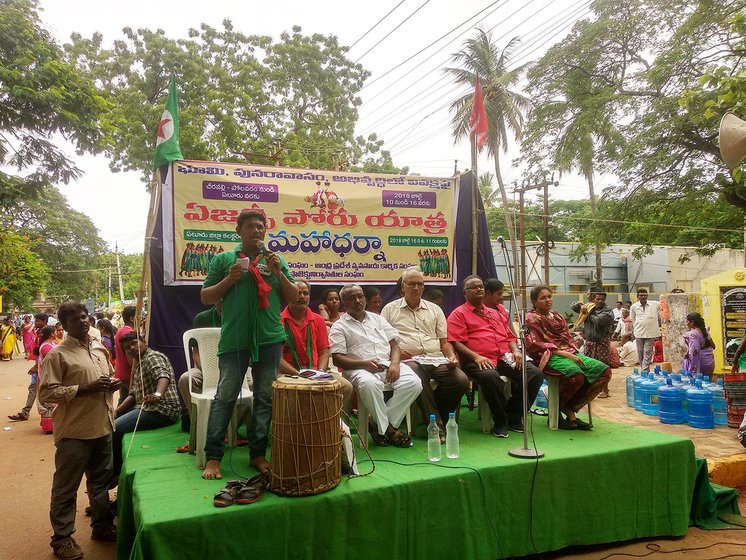 Meeting and dharna at the collectorate (left) in Eluru; Tellam Ramakrishna (right) was among those who addressed the gathering

“All of these are being bypassed in the hurry to complete the Polavaram project and the government is using all its forces to suppress resistance of the tribals by foisting false cases against them,” says Tellam Ramakrishna, district president of APGS, who has half a dozen cases against him. Ramakrishna is a Koya Adivasi, and his village too is in the submergence zone of the Jalleru reservoir.

“We didn’t walk to burn our fat, we walked to get back our lands,” he says, addressing around 2,000 people gathered at the district collectorate. According to a 2006 statement by the former minister of tribal welfare Redya Naik, 55,000 acres of land which belonged to tribals was taken away from them in West Godavari district alone, Ramakrishna tells the crowd. “Land is our basic right.  We want our land back,” he says. The audience applauds loudly.

During the padayatra , women clearly outnumber the men. They carry plastic baskets and cloth bags with water bottles and food packets given by the organisers, and their own modest lunch-boxes. Savaram Lakshmi, from Ankanna Gudem village of Jeelugu Milli mandal , has walked the entire distance. “Sometimes, we didn’t have water for kilometres together. In other places, it was raining heavily. But we still continued to walk,” she says. 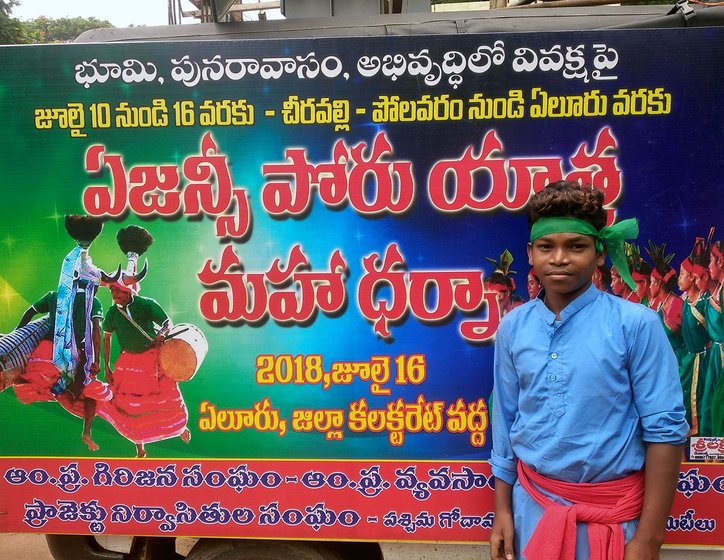 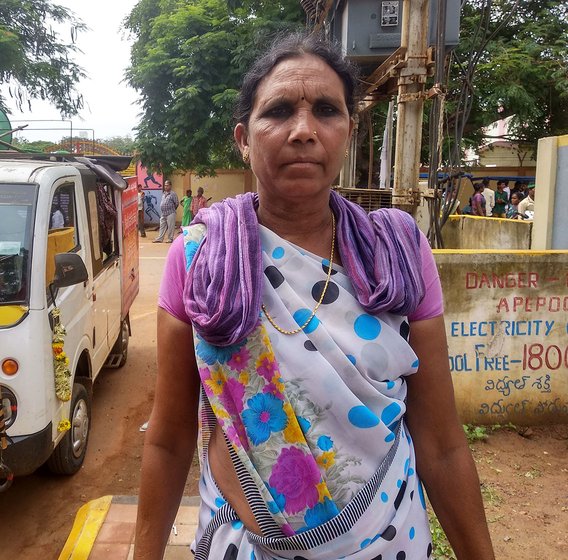 Korasa Aditya (left), Savaram Lakshmi (right) and others walked through rain, rivers, fields and forests 'for our people, for our lands, for our forests'

“We started at 8 every morning and stopped at 10 at night [covering around 40-50 kilometres a day]. One or two days, we walked till midnight as the schedule got delayed due to unfavourable weather conditions. We walked barefoot in complete darkness, in waist-deep water, in mud in which we sank till our knees, in forests and in fields,” says Korasa Durga, 32, from Barrinkalapadu in Jeelugu Milli mandal , showing me the blisters on her feet.

Tamaram Venkayamma, 25, who has walked the full length of the padayatra, says, “Our ancestors cultivated six acres of podu [forest] land and now, without any paper [legal entitlement], our land is being submerged. We want the patta [land titles] and the compensation.” Though many of the tribals have applied for the patta through the Forest Rights Committee in the gram sabha , the titles documents are struck at the District Level Committee (headed by the collector, which issues the pattas ).

“There seems to be an unwritten consensus between the forest officers and the government of Andhra Pradesh to not recognise the claims of the people in the submergence region, as doing so would require large amounts of lands to rehabilitate the tribals,” says P. Suresh Kumar, a lawyer at the High Court of Andhra Pradesh, who is fighting cases on behalf of the tribals. 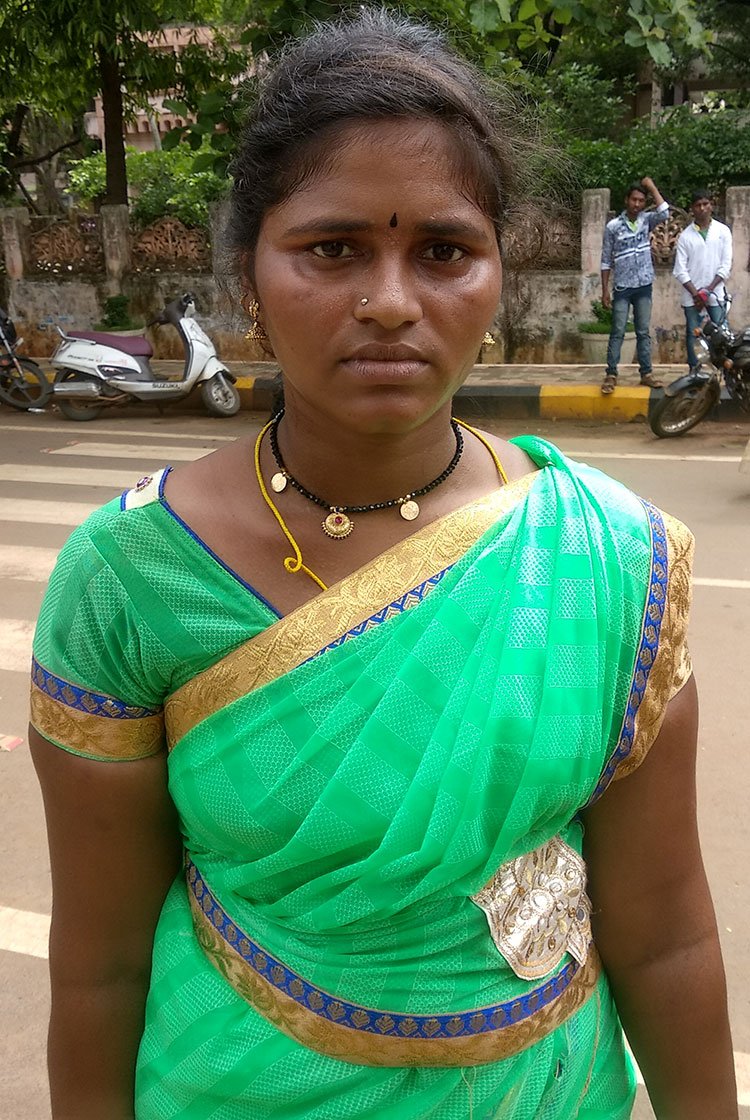 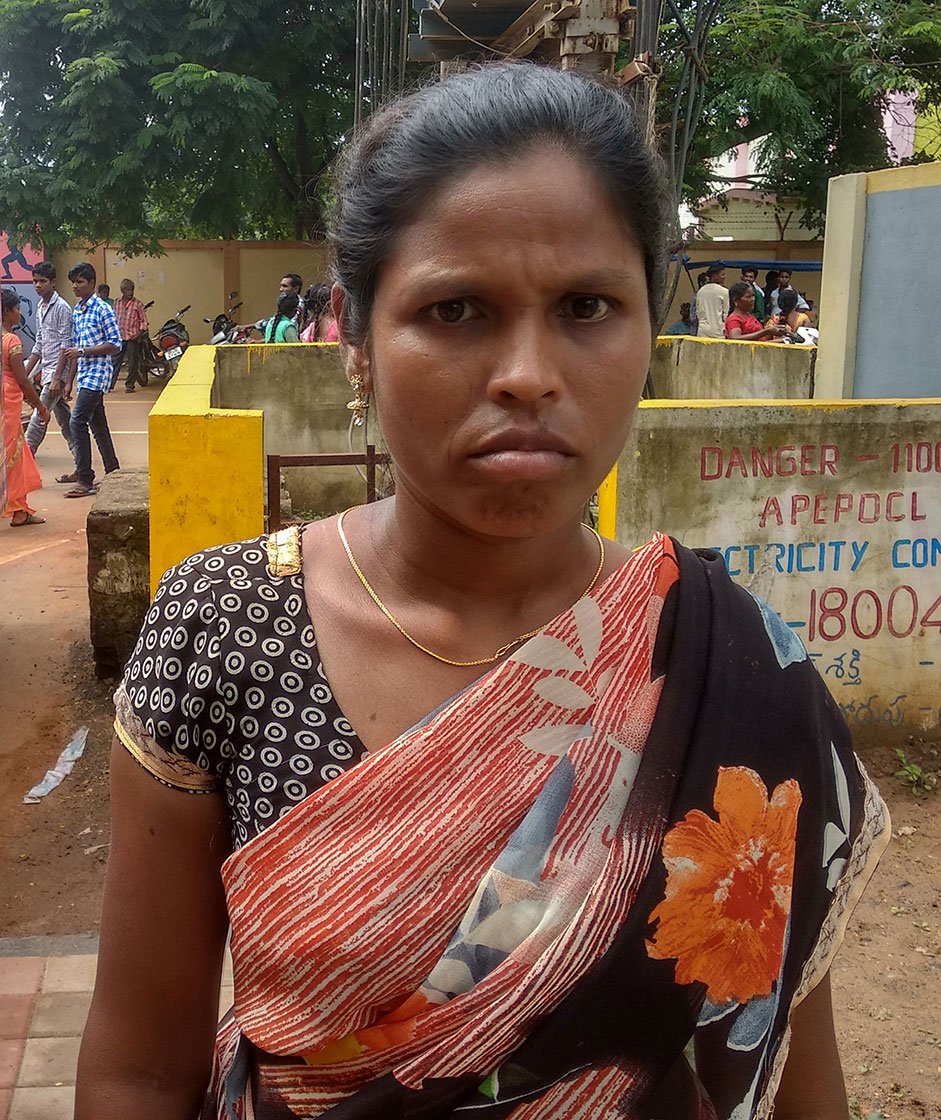 Korasa Durga (left), Tamaram Venkayamma (right), and many others will be displaced – with no real  compensation – by the project

Why did the Adivasis decide to undertake this painful and arduous journey? “We have submitted applications regarding the taking away of our land by the farmers [non-tribals] to the local authorities tens of times, but no one cared. We came here hoping the collector will listen to us,” says Durga.

But the collector, Katamaneni Bhaskar, didn’t come out to meet the exhausted Adivasis and chose to send district revenue officer N. Satyanarayana, who took the memorandum and left without speaking to the protesters.

Still, Dugra, Venkayamma and the others hope that walking 300 kilometres will make a difference. Young Aditya took a week’s leave from his school to be a part of the padayatra . “I have done this for our people, for our podu lands, for our forests,” he says.