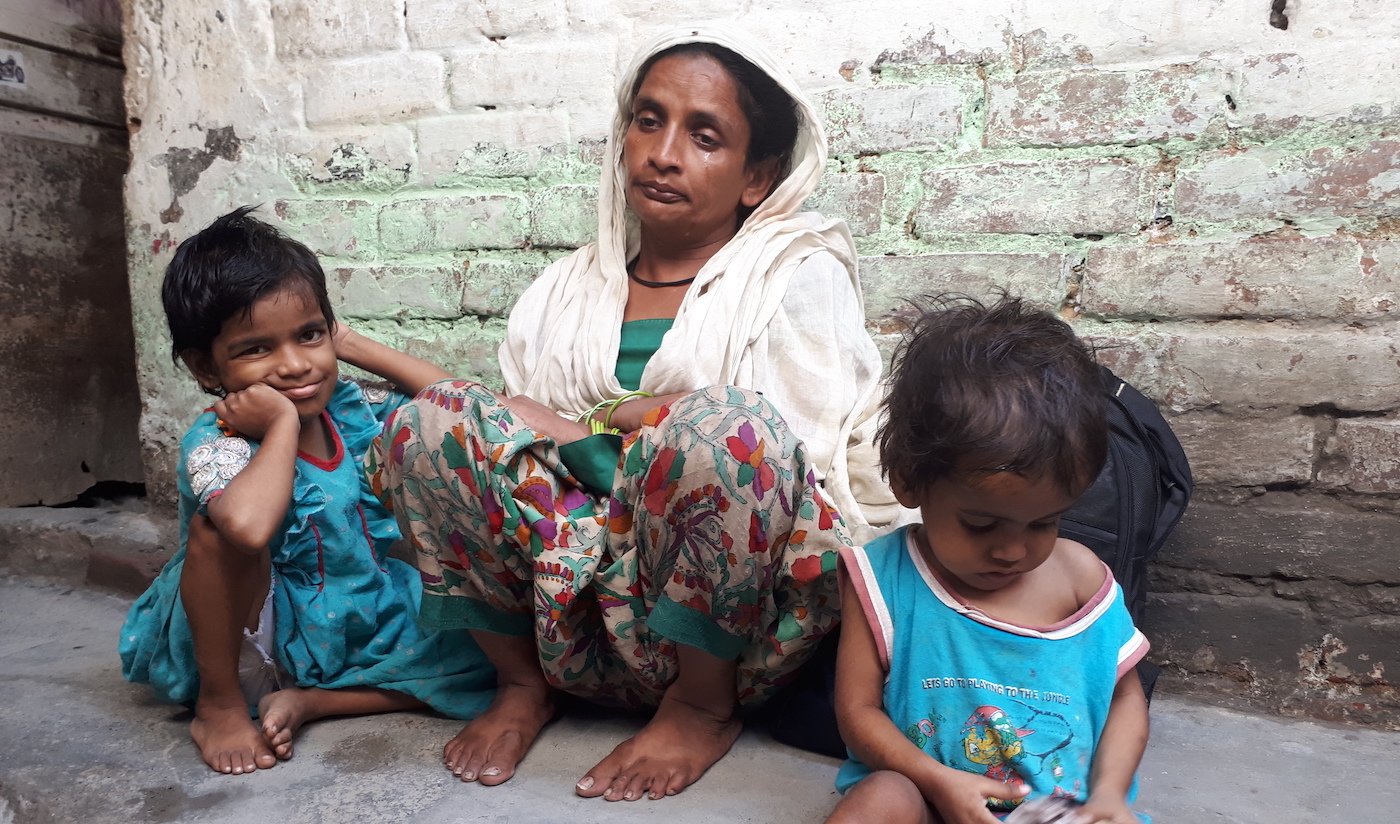 'On how many fronts can I fight?'

After Anil's death in September 2018 while cleaning a sewer in Delhi, Rani has battled grief and barbs about not being his legally married wife, and is hoping the state will now bring in machines to clean the drains

“If these machines had been brought in before, my children’s papa would not have left them. Now they are not of any use to me, but they will at least be useful for other women. Their men will not die in the sewers. No one should have to suffer the way I do.” So saying, a visibly distressed Rani Kumari became silent.

When I first met Rani late last year, she was sitting on the steps at a conference venue in Delhi, where she had come for an event organised by the Safai Karamchari Andolan, a nationwide movement to eradicate the cleaning of human excreta by human beings, and stop the recurring deaths of workers in sewers and septic tanks. At this event, on display were various technological solutions to replace manual cleaning.

Sitting on the steps, 36-year-old Rani took out a photo from a plastic bag. It was of her partner, 30-year-old Anil Kumar. She wiped it with her frayed white dupatta and became restless, pacing up and down with her children, seven-year-old Lakshmi and 11-year-old Gaurav, and carrying 2.5-year-old Sonam.

When a woman loses a family member in the septic tanks and sewers of India, besides trying to cope with the loss, she has to fight for justice and compensation, and worry about her family’s survival. Rani’s situation is even harder. We talk some more when I visit her home in Dabri, a colony in south-west Delhi. 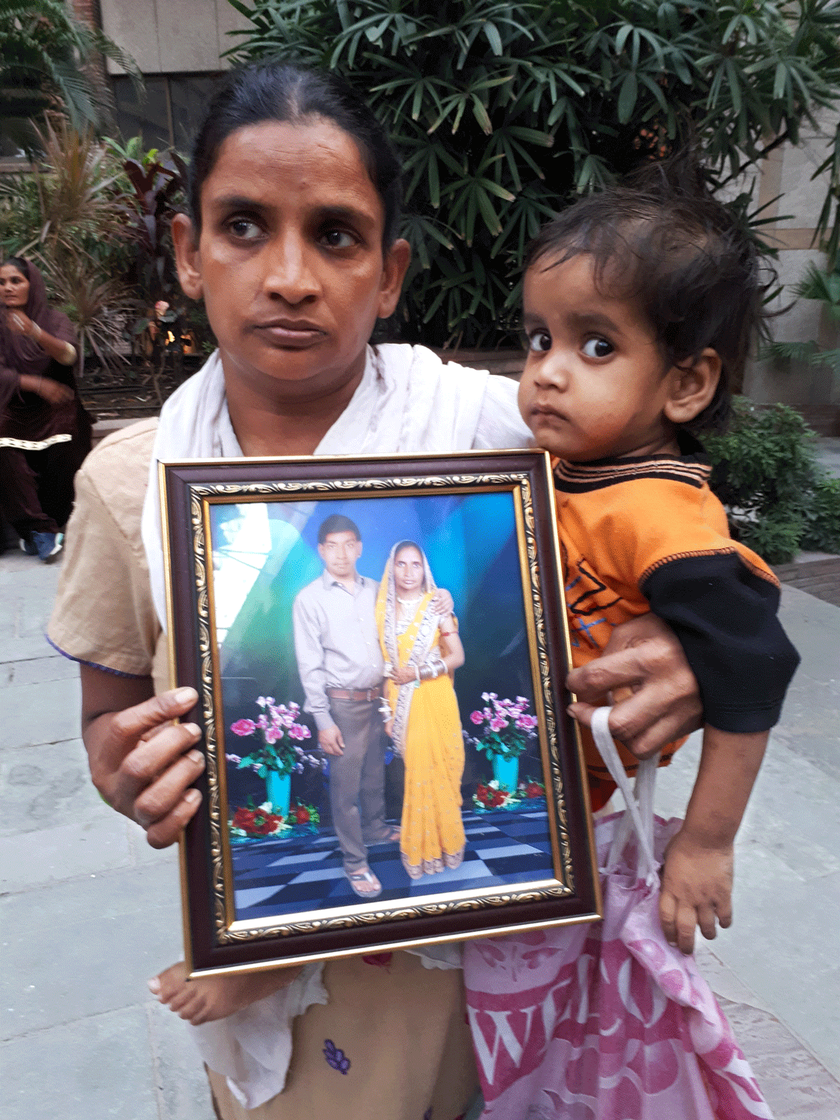 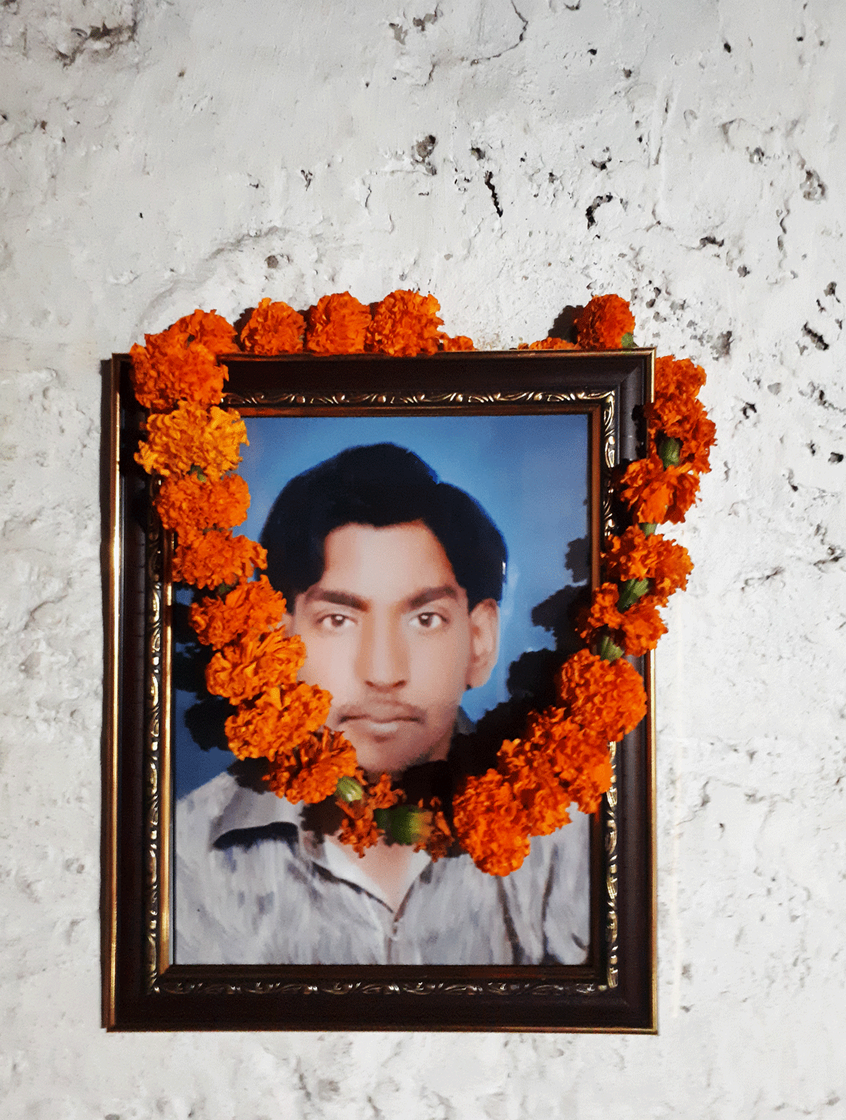 When a woman loses her husband to the sewers of India, besides trying to cope with the loss, she has to fight for justice and worry about her family’s survival. Rani was not legally married to Anil, so her situation is even harder

“I am not his wedded wife, but I was everything to him. And he was my beloved. He gave me love and respect, and treated my children as his own,” she says. Rani is unwilling to talk much about her former husband, the children’s father, who she indicates was severely violent – burn marks from that time are still visible on her arms and legs – and eventually left for another city. “Anil and I were living together [for the last 3-4 years], our hearts were one, but we were not married. I was married to someone before but Anil was single. Our relationship was not a secret, everybody knew that we lived as husband and wife. My children got a father’s love for the first time. We lived in poverty, but we were happy.”

On September 14, 2018, Anil Kumar, who was from the Dalit Valmiki community, died in a municipal sewer on the main road, a short distance from his home in Dabri.  It was 7 in the evening – that’s the time noted in the FIR (first information report) at the local police station. Rani and the neighbours have said that Anil got a phone call after 5:30 p.m. and left for work. According to a statement by a witness mentioned in the FIR, a local contractor sent Anil into the sewer alone with the support of only a thin rope. The rope broke.

Rani, waiting at home that evening, was getting increasingly worried about Anil not picking up his phone. She went out looking for him in the streets. Then someone told her that a man has fallen into a sewer. She rushed to the spot and found only his shoes. Anil had been taken to the hospital, already dead.

He had been cleaning drains and sewers for over 15 years. He had even put up a board with his phone number for canal-sewer cleaning in the lane leading to his house. After he died, the police removed the board.

According to a statement by a witness mentioned in the FIR, a local contractor sent Anil into the sewer alone with the support of only a thin rope. The rope broke

Watch video: 'The sewer was bubbling. Anil had fallen down there'

The amount paid to him for these jobs varied from Rs. 200-300 for small drains to Rs. 500-1,000 for bigger sewers. On average, Anil earned Rs. 7,000 a month; his work usually increased in the pre-monsoon week, as did his modest earnings. Rani cleaned floors in 3-4 houses, and earned around a total of Rs. 2,500 a month. But she was not regular, she says, because she has to stay at home to look after her children. Her older daughter Lakshmi has misshapen legs, possibly due to to severe malnutrition, and she can’t speak properly. The little girl, Sonam, can’t even walk without help. So once Rani started living with Anil, she stopped going for domestic work.

Rani and Anil both are both originally from Kankhal, a suburb of Haridwar in Uttarakhand. Her parents are no more; her only family, she says, are her children. Around 10 days before Anil’s death, Rani and Anil’s four-month-old son died of pneumonia.

When Anil died, Rani was so troubled that she wanted to end her own life. “One day, I thought that I must end this story,” she says. “On how many fronts can I fight? My anger grew, I gathered together the clothes at home and set them on fire… the landlord came running and doused it. I was crying, I was angry, I was in pain.”

The police, instead of catching the person responsible for Anil’s death, commented on her living arrangements with him, Rani says. “They laughed crudely and said ‘Who knows how many men she must have slept with, how many husbands she has. Who can tell who she will stay with tomorrow? Who will listen to her?’ Now tell me what I should do?” 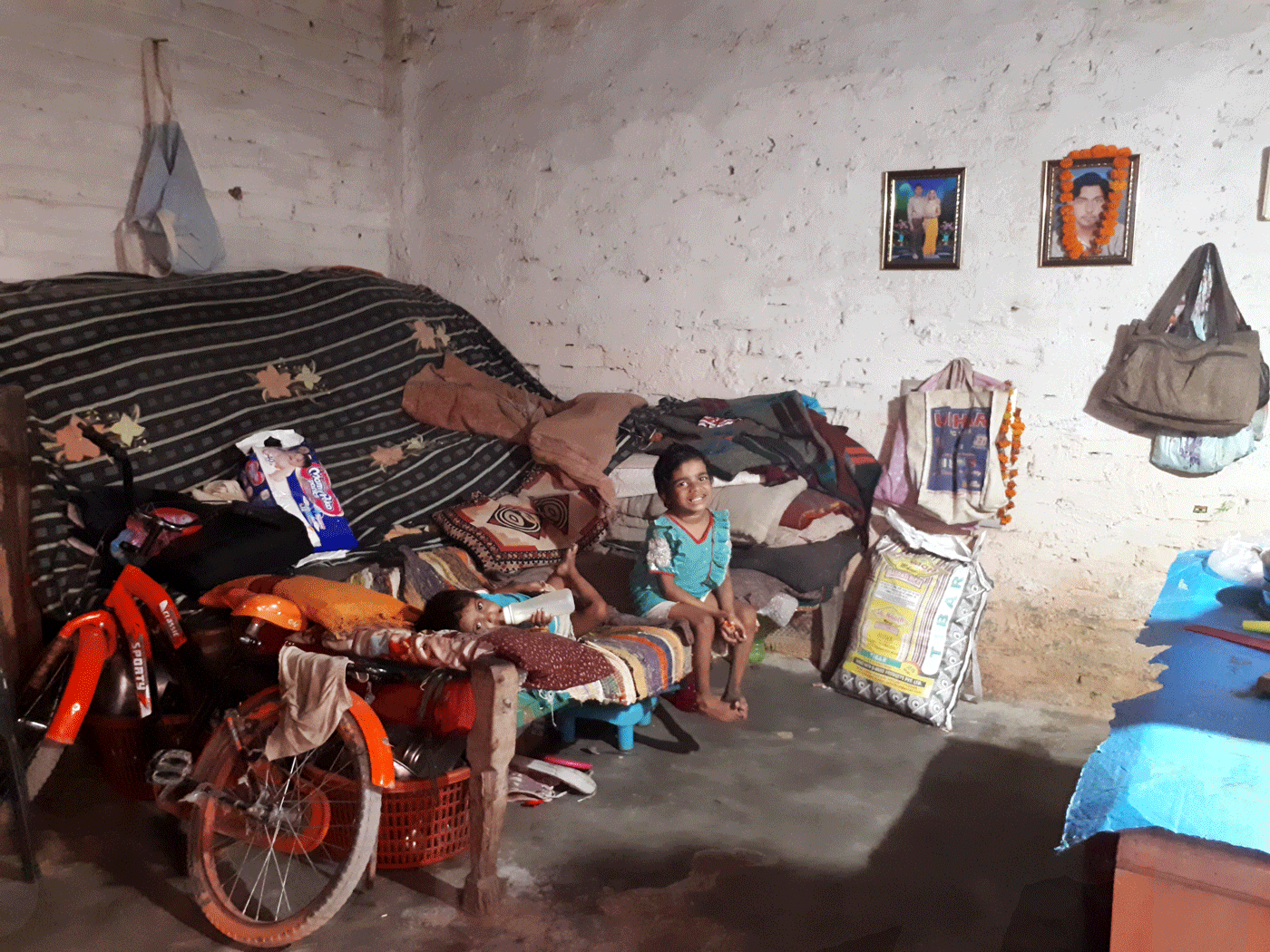 Rani and her three children – the two daughters are so malnourished, they can barely walk – living on rent in a small, dark and damp room in Dabri, faced severe hardships after Anil's death

For some weeks, Rani and her three children, living on rent in a small, dark and damp room in Dabri, faced severe hardships. She could not afford to continue paying the rent. Moneylenders – Rani and Anil had taken loans over time – started harassing her. Gaurav stopped going to school, unable to face his classmates after the sewer episode.

A Supreme Court order of of 2014, based on a public interest litigation filed by the Safai Karamchari Andolan in 2003, has mandated Rs. 10 lakhs as compensation for families of persons who are killed cleaning sewers.  As a ‘dependent’ and live-in partner, Rani is legally entitled to the compensation. “At first, everyone said they would help me get the 10 lakhs,” she says. “But they have gone back on their word, each with their own excuses. My children and I do not exist in this system.”

Because the couple lived together and Rani spoke openly about it, she says, “everybody distanced themselves from us.” Some of the organisations that had initially said they will help the family, hesitated. Since then though, a few charitable organisations have raised money through crowd-funding and put the collected amount – reportedly Rs. 50 lakhs (I am unable to verify this amount) – into a 10 year fixed deposit in Gaurav’s name. Since he is a minor, Rani can operate the account and use the interest to manage her family’s expenses.  A few other individual donations – collectively around Rs. 50,000 – were also deposited into the account soon after Anil’s death. 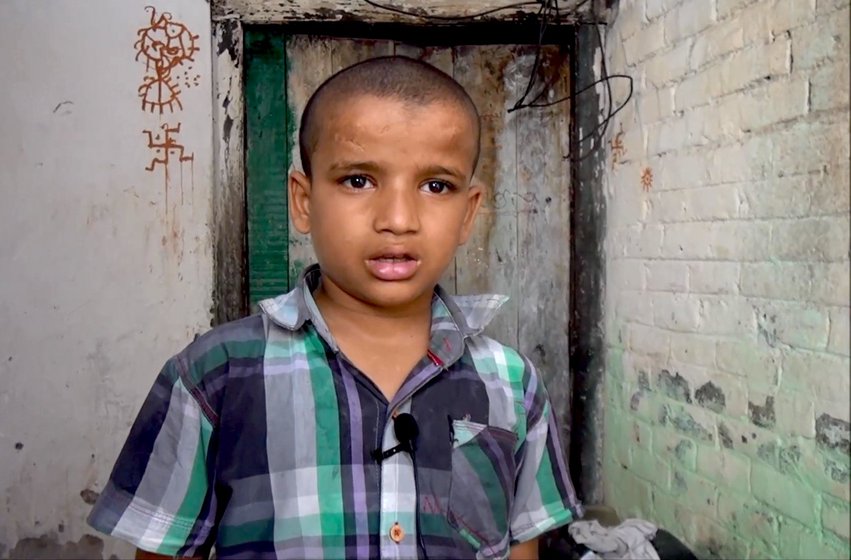 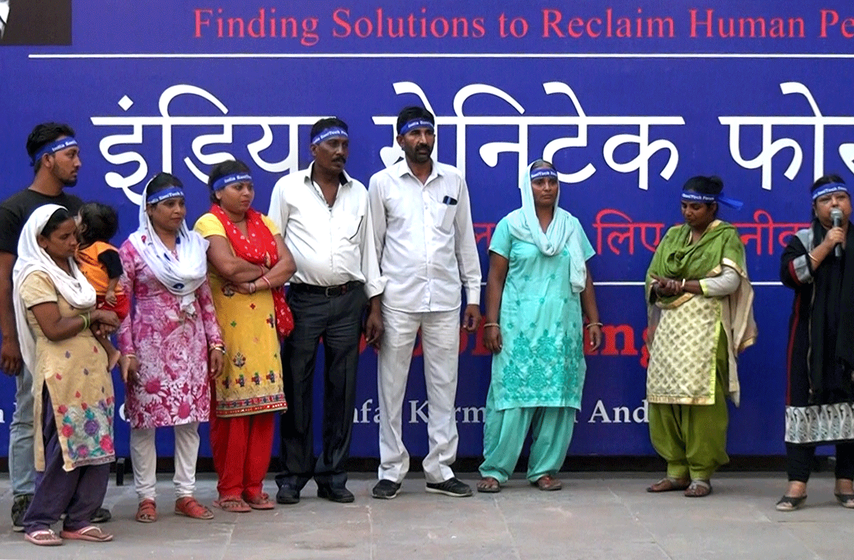 Left: Rani's son Gaurav stopped going to school, unable to face his classmates. Right: At the India SaniTech Forum, women who have lost family members demanded machines be brought in to replace the cleaning of sewers by their men

In addition to the Safai Karamchari Andolan, some people in the community have also tried to help.  Virendra Singh, Anil’s co-worker, is helping Rani with bank paperwork, and accompanies her to Andolan meetings.  In Delhi, he says, there are many unmarried men – as was Anil – from their Valmiki community. “Since we don’t have a fixed job, we don’t get married even in the village. I too am over 30 years old and have no hopes of getting married. I am trying to help Rani and her family because society and the police want to finish her.”

After our conversation, Rani walks with me to the end of the lane in Dabri along with her children. “I have borne many hardships at a young age, I was beaten, but with Anil I found happiness for the first time. After experiencing such happiness, it is difficult to live a life of sorrow again. A lone woman is vulnerable to the attack of vultures in society. I am living for these children and will continue to do so, no matter what happens to me. When we run the machines [for cleaning sewers] people will realise our abilities. You must bring these machines soon...”

At the India SaniTech Forun, where I first met Rani sitting on the steps, on display were various machines. Among them was a cleaning robot called Bandicoot, which is reportedly being used on a pilot basis in Kerala. Another innovation called a Sewercroc uses jet pressure and cutters to slice through the sludge. Then there is a 360-degree rotating camera that can send images from inside a sewer to a computer outside. On display was also a gas-tester that warns of poisonous gases inside, which cause a large number of deaths in tanks and sewers. And if human intervention is absolutely unavoidable, the summit also showcased a ‘sewer-suit’ that can protect the workers going in.  Negotiations are reportedly on with various state governments, including the Delhi administration, to introduce these technological solutions.

Along with Rani, around 10 other women from Delhi, Haryana, Punjab, Rajasthan, Telangana and other states spoke at this forum.  They all recalled the tragic incidents that killed their husbands or other family members. They voiced their anguish and concerns.  They spoke in many languages, all seeking solutions to their common source of distress. Almost all the women supported technological solutions and said they were willing to learn how to operate the gadgets that could make it possible for machines – not men – to clean the country’s sewers.