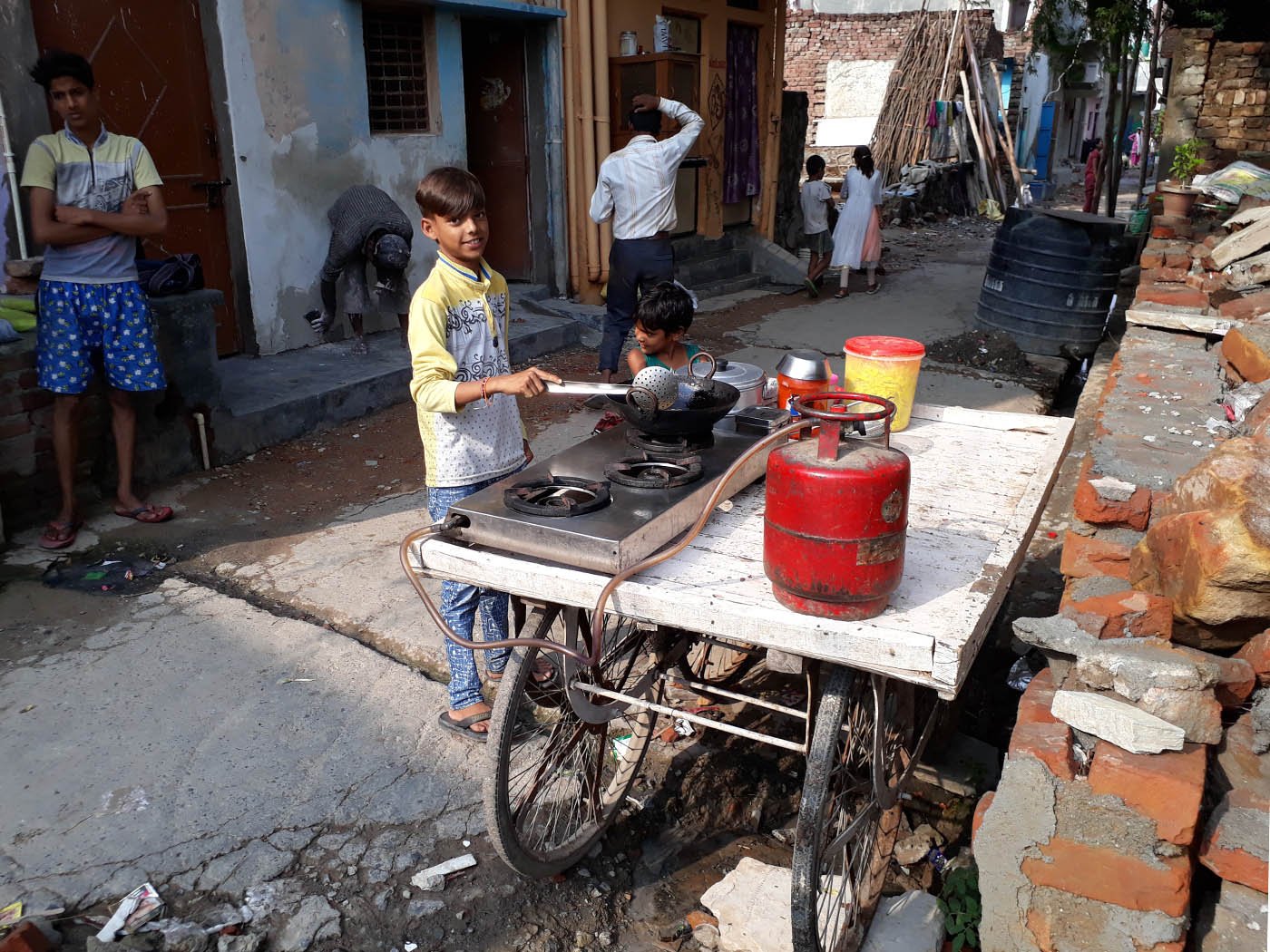 When he was 10, Arjun Singh's father Rajeshwar died while cleaning a sewer in Delhi. At 14, the schoolboy sells snacks to support himself and his mother, and dreams of becoming a bank manager and a chef

In the Pul Pehlad mohalla (settlement) of Lal Kuan in outer Delhi, everybody knows ‘the boy with the pushcart’ or the ‘chilli-potato boy’. He is the youngest pushcart vendor in the area.

I spot him running through a narrow lane in the slum settlement, bordered with open sewers, to the empty space where he parks his handcart. He rolls the cart to the end of the lane, wedges stones against its wheels to keep it immobile, and disappears into a room. For 14-year-old Arjun Singh, who will soon load his cart with potato chips and momos for sale, this is a daily routine.

The shy but cheerful boy lives with his widowed mother, Laxmi Singh. Inside their small room, there is no furniture. A mirror adorns a wall, with a heart shaped out of brown tape stuck in a corner. ‘Laxmi+Arjun’, it declares. "I wrote that," says Arjun, "so whoever visits us can see our world in it."

It is an isolated and difficult world.

On July 14, 2013, Arjun’s father Rajeshwar Singh died while cleaning the sewers at the Indira Gandhi National Centre for the Arts. He had been employed there since 2011. He was one of three cleaners who inhaled toxic gases and died in the building's basement. The other two men were Ashok Kumar and Satish Singh; all of them were contractual workers at the government-run centre for the performing arts. All three belonged to the Valmiki Dalit community, and all of them lived with their families in the Valmiki basti of Trilokpuri (Laxmi later moved with Arjun to where her married daughter Minu lives, in Lal Kuan).

Since then, Ashok Kumar and Satish Singh’s families have returned home to Meerut. Neither of them received the Rs. 10 lakhs compensation mandated by a 2014 Supreme Court order for families of conservancy workers who die doing this hazardous and dehumanising work. More than four years after Rajeshwar Singh died, Laxmi has received only Rs. 4 lakhs – ostensibly because her husband was on contract, not a permanent employee.

Laxmi, in her late-30s, also once worked as a sanitation worker – sweeping, removing garbage, doing other cleaning tasks – at the same National Centre for the Arts. She and her husband each earned Rs. 3,500 a month. After her daughter Minu’s marriage in 2011, however, she says she lost interest in the work and became irregular. And after her husband’s death, she refuses to consider a job that entails cleaning or scavenging.

"We belong to a scheduled caste, we are Valmiki," Laxmi explains. "I spent my childhood in Sanchauli village in Mathura district of Uttar Pradesh. My father, Roshanlal, was an agricultural labourer. My mother, Ramkali, worked as a cleaner in the village, sweeping, cleaning and picking up garbage, shit and dung. There were no toilets in the villages then. People from the Chamar caste would pick up the dead animals.”

Laxmi was married at the age of 13 or 14, Rajeshwar was then 17 or 18 years old. He was originally from Rohtak in Haryana, but was working in Delhi, cleaning toilets and sewers. Everyone in his household was a sanitation worker. “My mother-in-law worked at the police headquarters in Delhi,” Laxmi says. “After she died, I tried very hard to get her job, but the officers refused to give it, saying that the rules had changed. My husband was earlier employed as a cleaner at Nehru Stadium, and then at Nirmal Bhavan. In the early days, he was paid only 400 rupees a month as a worker on contract. But he was a carefree man. He never worried about anything, nor did he ever give us cause for worry." 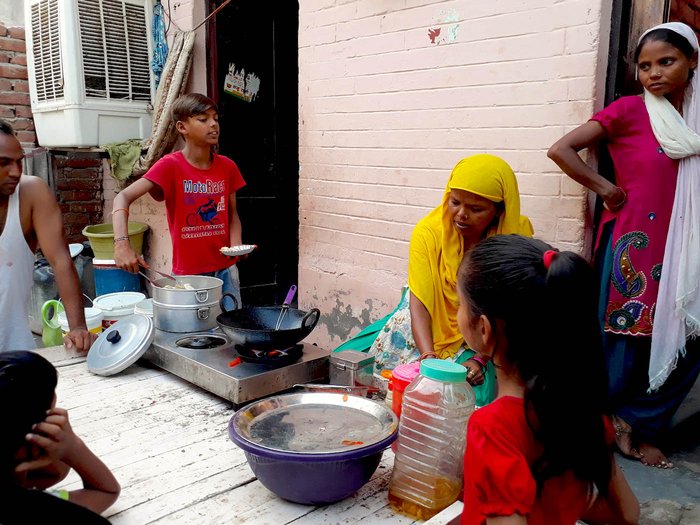 A mirror adorns a wall in their home in Lal Kuan, with a heart shaped out of brown tape stuck in a corner. ‘Laxmi+Arjun’, it declares. "I wrote that," says Arjun, "so whoever visits us can see our world in it." It is an isolated and difficult world

Their son Arjun was barely 10 when Rajeshwar died. “My father was very handsome,” Arjun recalls. “I was so much like him. My eyebrows are just like his. I am short just like him. He loved bhindi [okra] and so do I. He loved to cook, and now I find I am cooking too, but out of necessity. He was very loving, and called me Chintu.”

What Arjun remembers most about his father is the song he would sing frequently – ‘ Tum mujhe yoon, bhula na paogey’ (‘You will not be able to forget me easily’). "My biggest problem," Arjun says, "is that I cannot call anyone Papa anymore. I was not even 10 when Papa died. My mother was so distressed, she cried, and cried. Nobody helped us; all the relatives abandoned us. I feel I have to grow up as fast as possible so I can give my mother some comfort."

It is 3 p.m. as we speak, time for Arjun to get his wares ready. He grabs some potatoes from a sack and begins slicing them. After he has washed the chips, he casually adds in spices, talking about the whole process as if he were a masterchef on a television show. Then he begins to prepare the momos. Finally, everything is placed on the pushcart – gas cylinder, stove, cauldron, ladle, plates, chutney. His mother helps, arranging the corncobs.

Arjun sells his snacks in the mohalla every afternoon after school, making a profit of Rs. 100-150 on good days, though sometimes as little as Rs. 50. Often,  people do not even pay the Rs. 10-15 he charges per plate, and buy from him on credit. Sales are generally higher on weekends and festivals.

It is a precarious livelihood, but essential to keep them going since the only other income is the Rs. 2,000 widow's pension that Laxmi gets from the government. The people nearby, she says, especially the men, are jealous of their small success, complaining that the roadside food vending dirties up the place. Mehrunnisa Khatun, a neighbour, says, "These men do not like it when a lone woman makes progress, especially when the woman is from the Valmiki caste. They are just waiting for a chance to get rid of the pushcart." 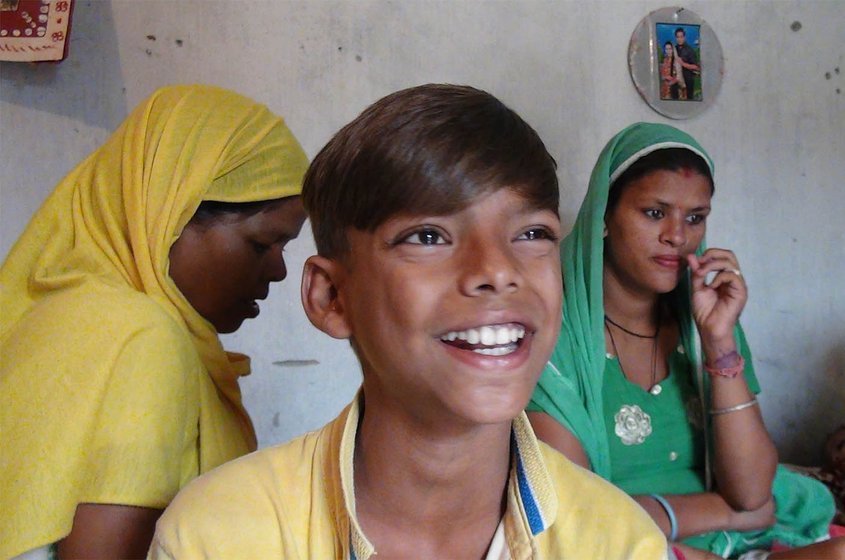 Laxmi (in yellow saree), her daughter Minu and Arjun. 'My biggest problem', he says, 'is that I cannot call anyone Papa anymore'

Laxmi and Arjun have small dreams for the immediate future. Of selling boiled eggs, of setting up a small shop where they can sell items of daily need and increase their income. But even these small dreams need capital. The Rs. 10 lakh compensation would have provided that capital. The Safai Karmachari Andolan, a community-based organisation working to eradicate manual scavenging, is helping Laxmi fight for the compensation, but Rajeshwar Singh was a contract worker, not a regular employee, leaving a loophole that his employers can exploit to refuse payment of the entire amount.

The Andolan also helped Arjun get admission in Class 6 at a government school, the Sarvodaya Bal Vidyalaya, Tughlakabad.  The family did not have the address proof required for admission, and Arjun's previous school in Trilokpuri delayed the issue of a transfer certificate. Now that Arjun is finally back at school, he can dream bigger. He dreams of becoming a bank manager and a chef.

Laxmi says she will not rest even after she gets the full compensation. She is determined to fight to abolish manual scavenging. "No woman," she says, "should lose her husband the way I lost mine. I am ready to go everywhere to say this. I had joined the Bhim Yatra [the nation-wide bus tour in 2015-16 to protest against, among other issues,  the deaths of conservancy workers in the sewers]. But the government is not ready to listen. If our people die, it makes no difference to anybody in this world. This is because our caste is written on our forehead. As long as manual scavenging and our caste are interlinked, we will not be released from this hell."

"I get very angry when I think that so many people are dying like this and the government is not doing anything about it," Laxmi continues. "Is there no takneek [technology] in our country to clean sewers? There is so much hungama [commotion] about the government's Swachh Bharat [Clean India campaign], but how is this nation swachh if even today people have to go in to clean the gutters?"