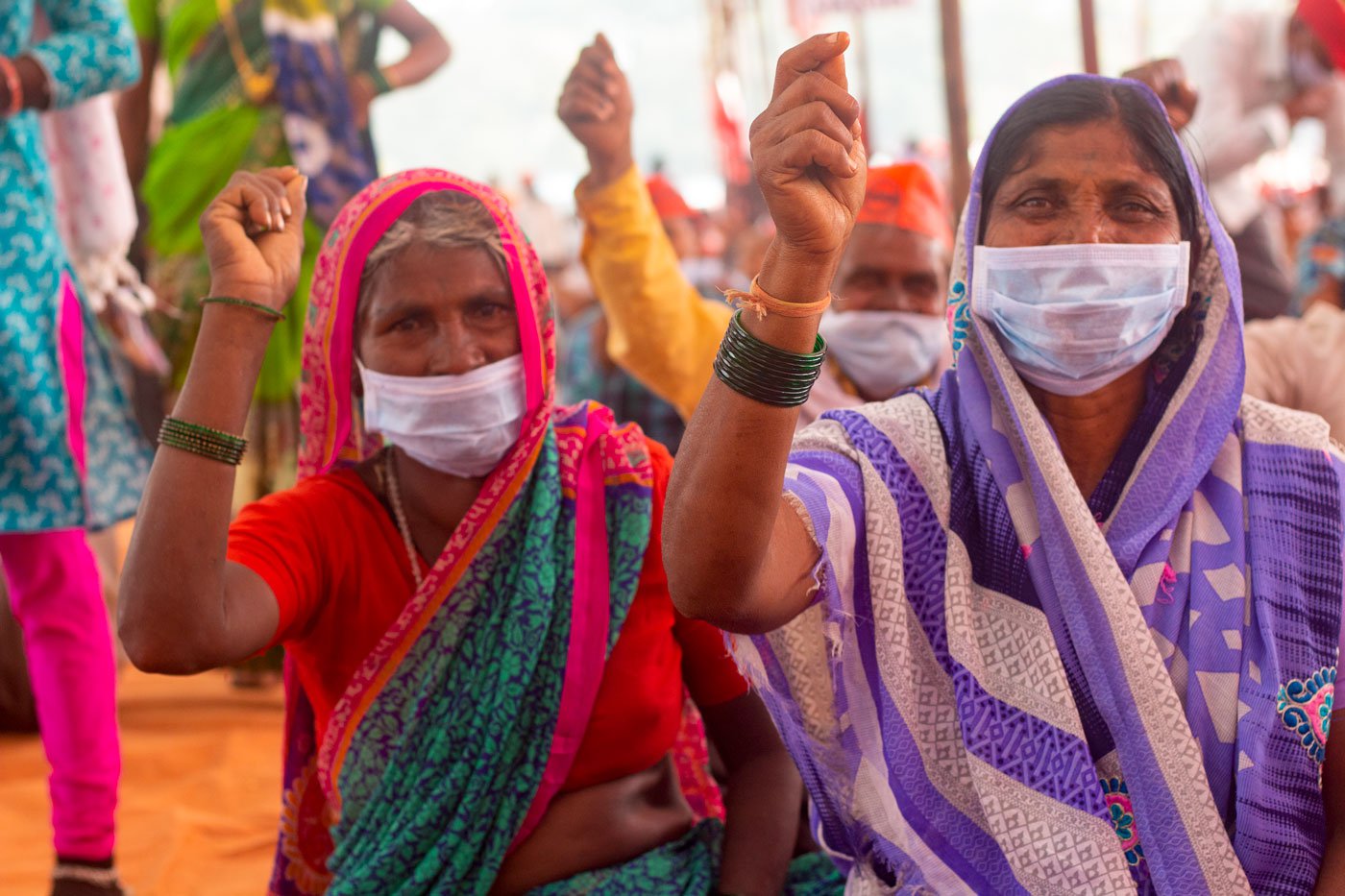 Tens of thousands of farmers from all over Maharashtra were at Azad Maidan this week in a sit-in organised by the Samyukta Shetkari Kamgar Morcha, to support the Delhi protests against the three new farm laws

At the maidan are tens of thousands of protestors at a sit-in organised by the Samyukta Shetkari Kamgar Morcha. They have come from 21 districts of Maharashtra after marching for roughly 180 kilometres over two days from Nashik, in solidarity with farmers at the borders of Delhi.

For over two months, lakhs of farmers, mainly from Punjab and Haryana, have been staging protests at various sites at the gates of Delhi. They have been protesting against three farm laws that the central government first issued as ordinances on June 5, 2020, then introduced as farm bills in Parliament on September 14 and hastened to become Acts by the 20th of that month.

The laws the farmers are protesting against are the Farmers (Empowerment and Protection) Agreement on Price Assurance and Farm Services Act, 2020 ; the Farmers’ Produce Trade and Commerce (Promotion and Facilitation) Act, 2020 ; and the Essential Commodities (Amendment) Act, 2020 . The laws have also been criticised as affecting every Indian as they disable the right to legal recourse of all citizens, undermining Article 32 of the Constitution of India.

These are images from this two-day protest meeting at Azad Maidan on January 24 and 25: 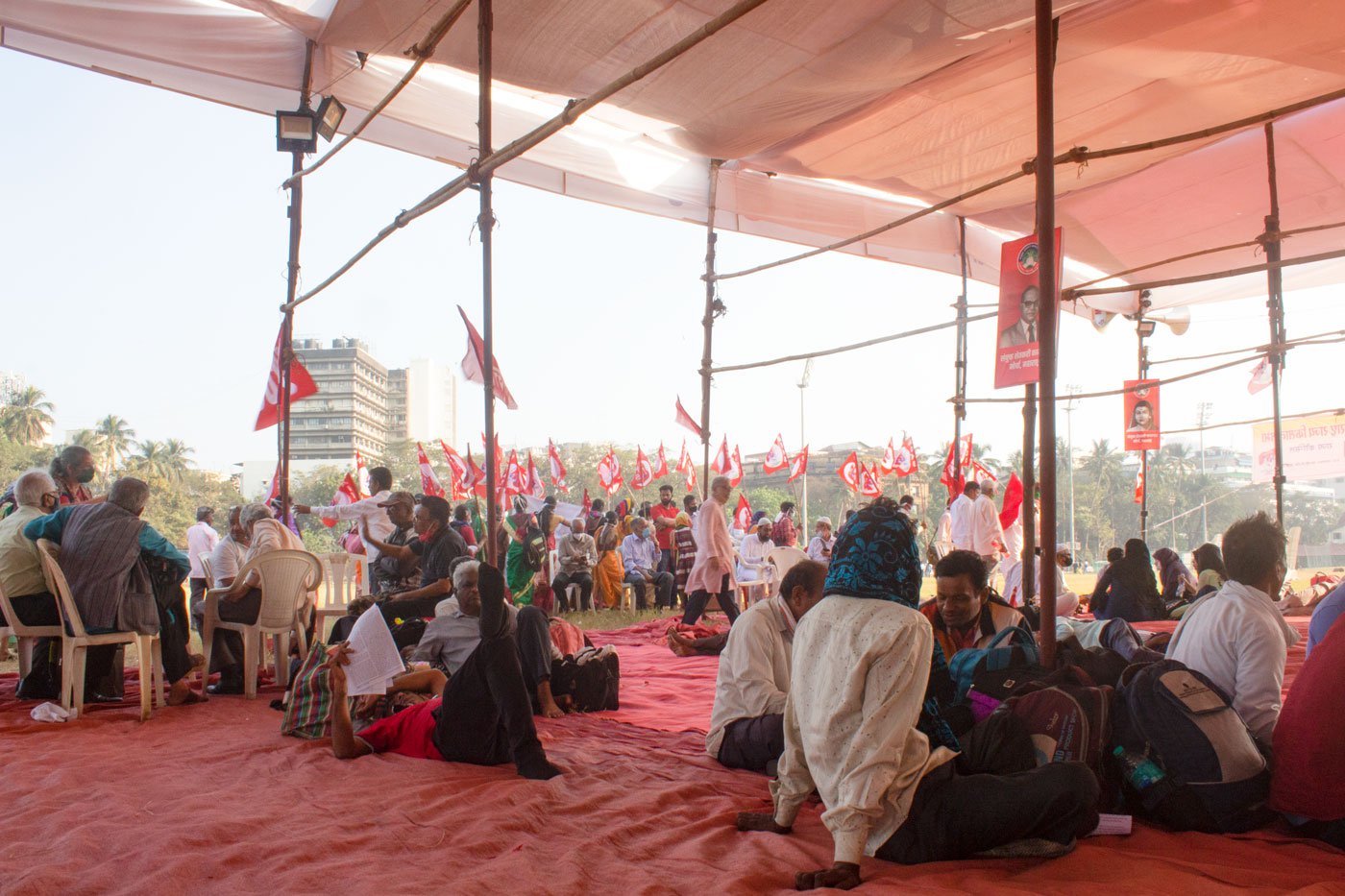 A group of farmers march in on the morning of January 24, while others who have already arrived rest after a tiring journey 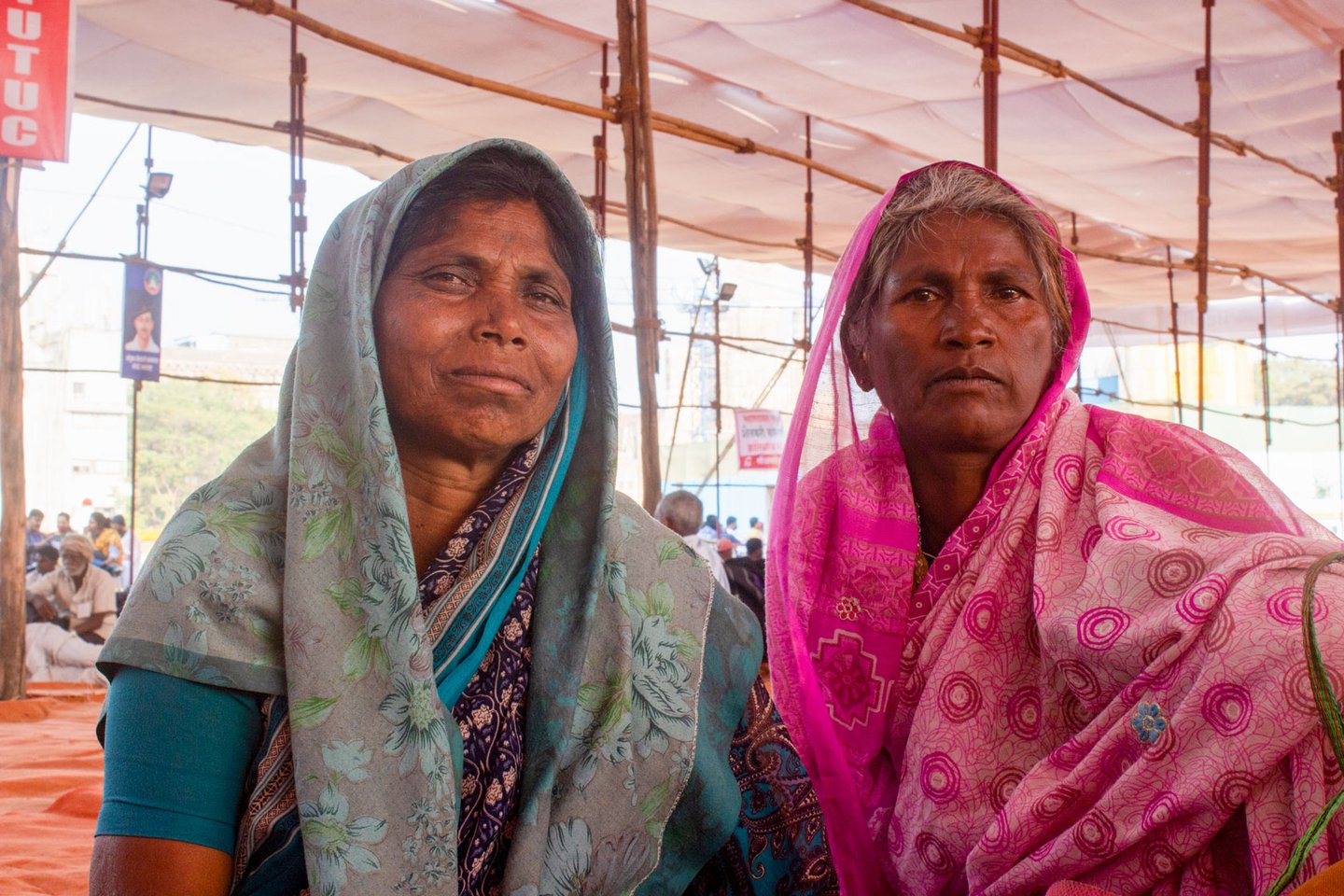 Arunabai Sonawane (left) and Shashikala Gaikwad are Bhil Adivasi farmers from Chimnapur village in Kannad block of Aurangabad district. They have come to demand land titles under the Forest Rights Act of 2006 and protest against the three recent farm-laws. “There will be more pressure if more of us come [to protest],” says Arunabai. “That is why we are here.” 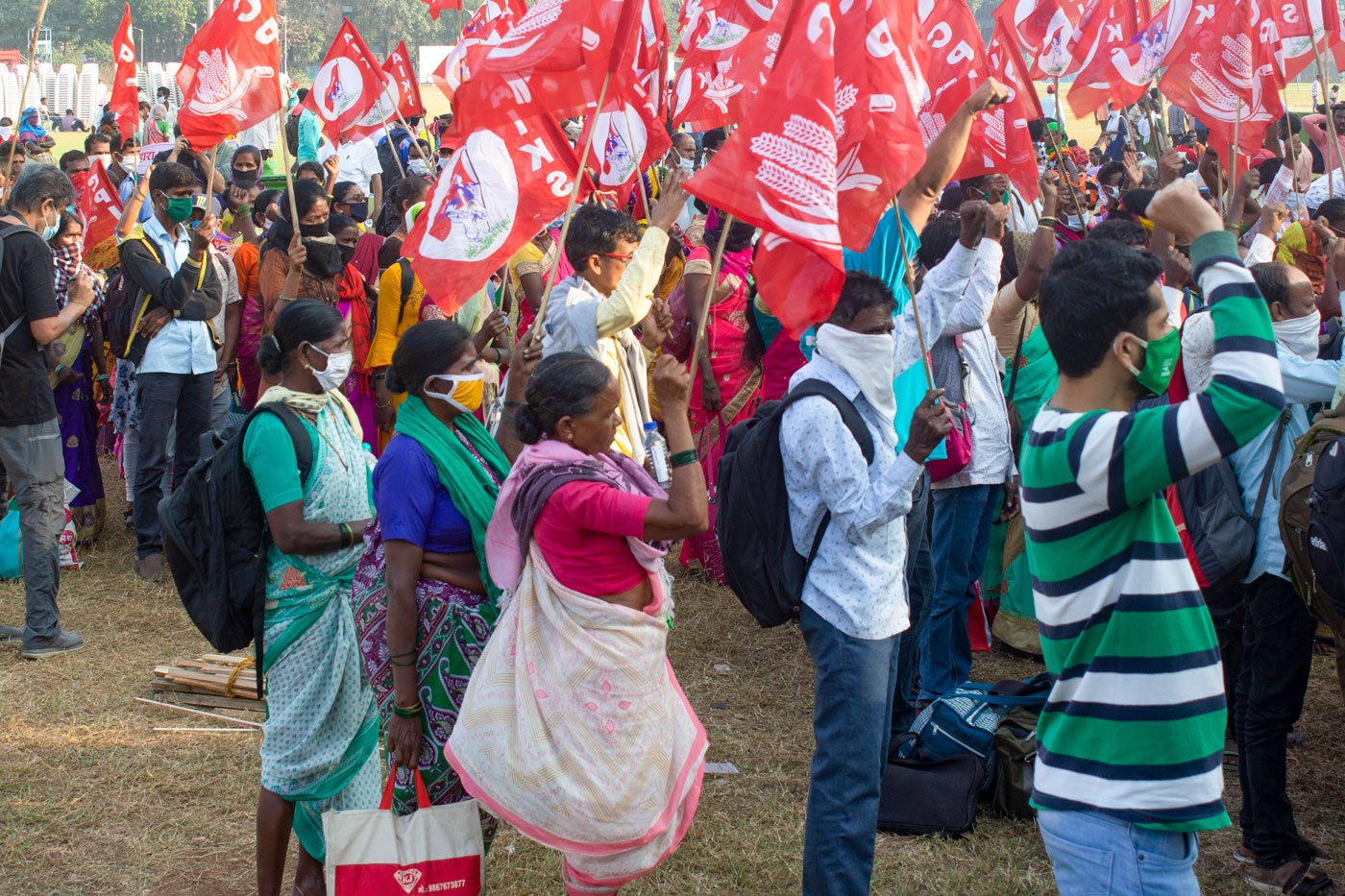 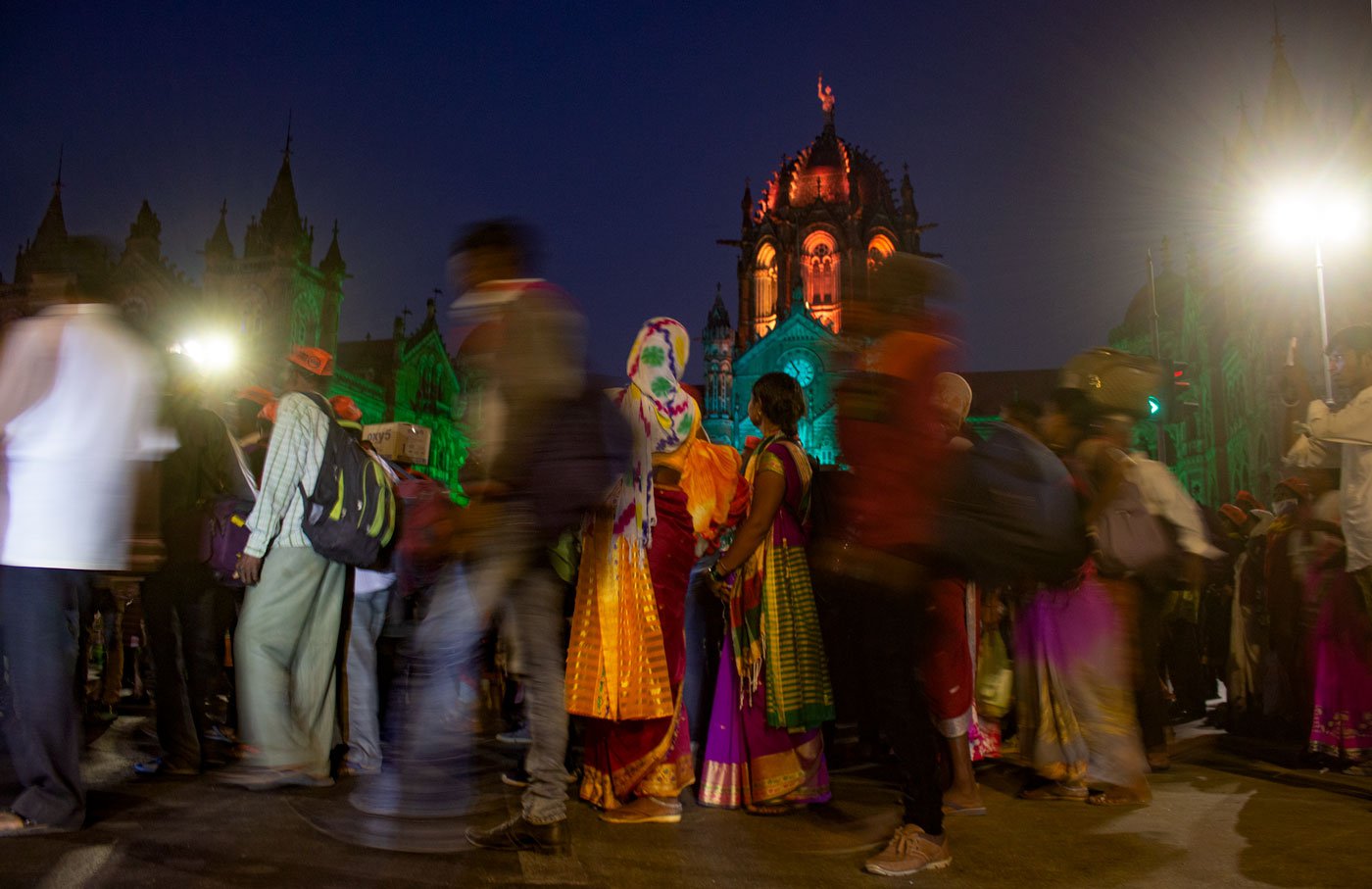 Farmers from Nanded, Nandurbar, Nashik and Palghar districts of Maharashtra march towards Azad Maidan on the night of 24 January, after parking the vehicles that brought them from Nashik city 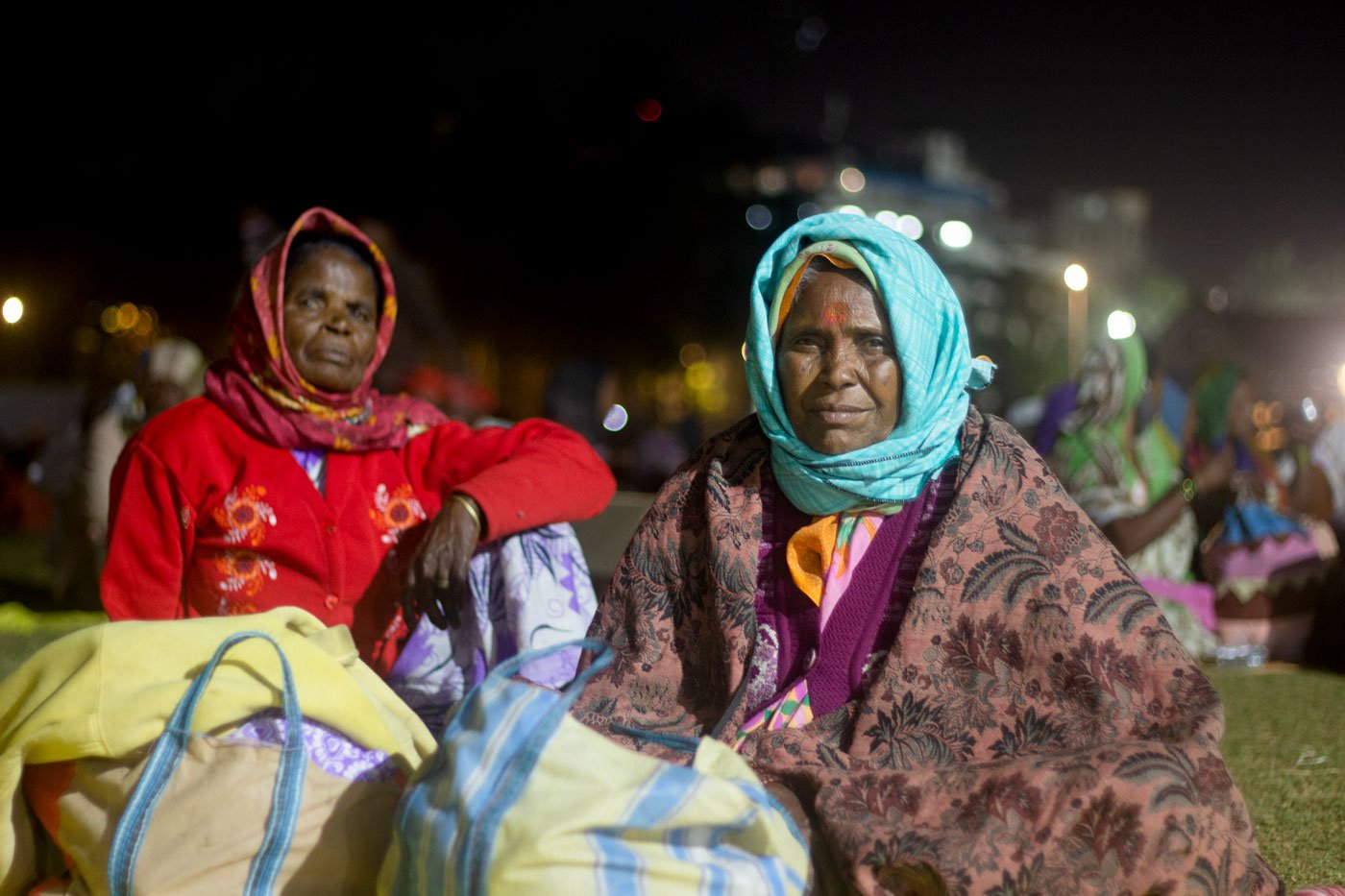 Mathurabai Sampatgodhe (left), 70, and Dangubai Sankar Ambekar, 65, from Dhodambe village in Chandvad tehsil of Nashik district are bundled up for the night, as temperatures drop in Mumbai on a winter evening. 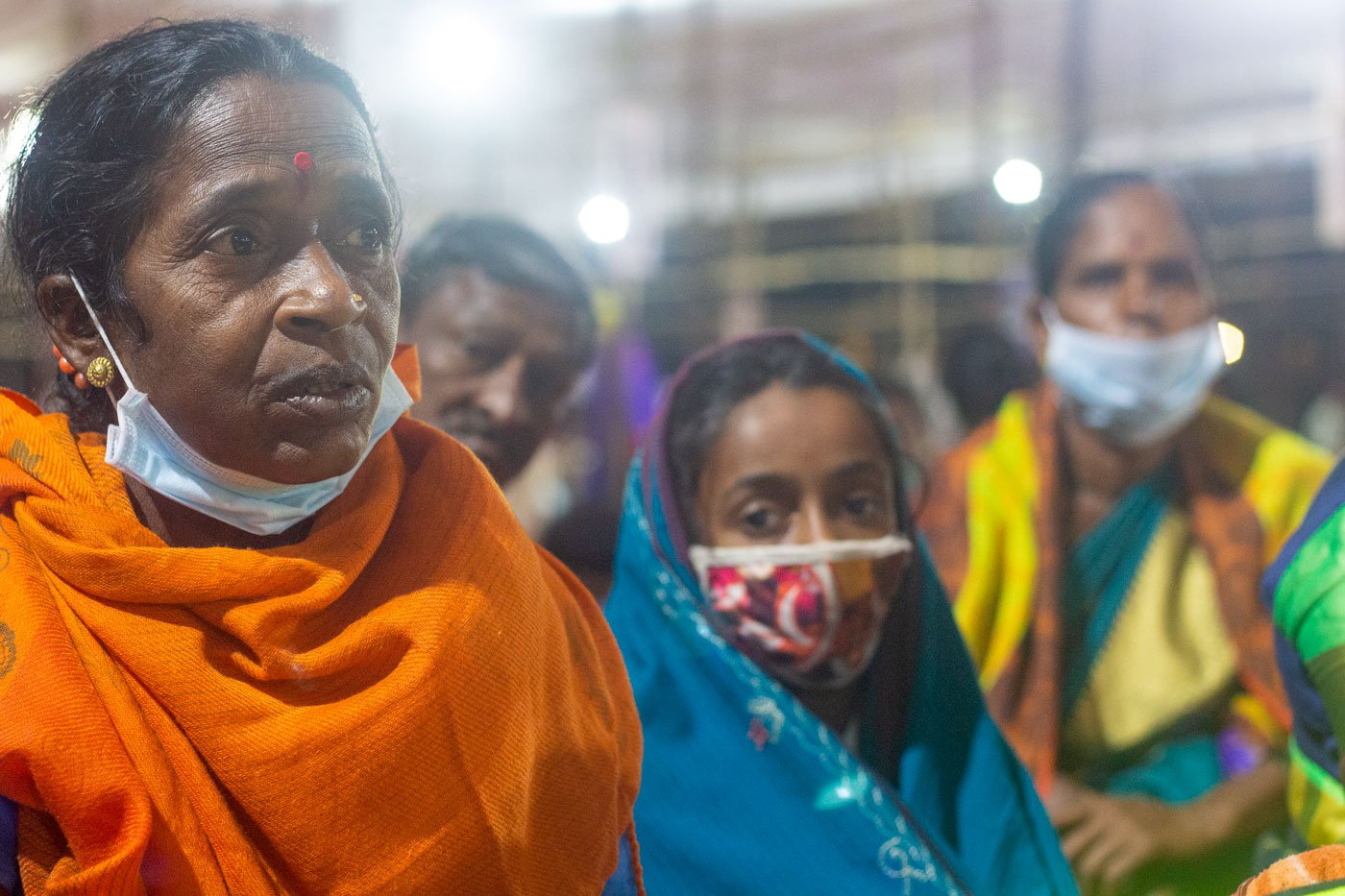 Ten-year-old Anushka Hadke (in blue shawl), is feeling cold. She has come from Palghar district’s Kharivali Tarf Kohoj village with her grandmother, Manisha Dhanwa (in orange shawl), who is in her late 40s. Anushka’s single mother, Asmita (in yellow saree) is an agricultural labourer. “We don’t have any land. We just labour all day,” Manisha says. 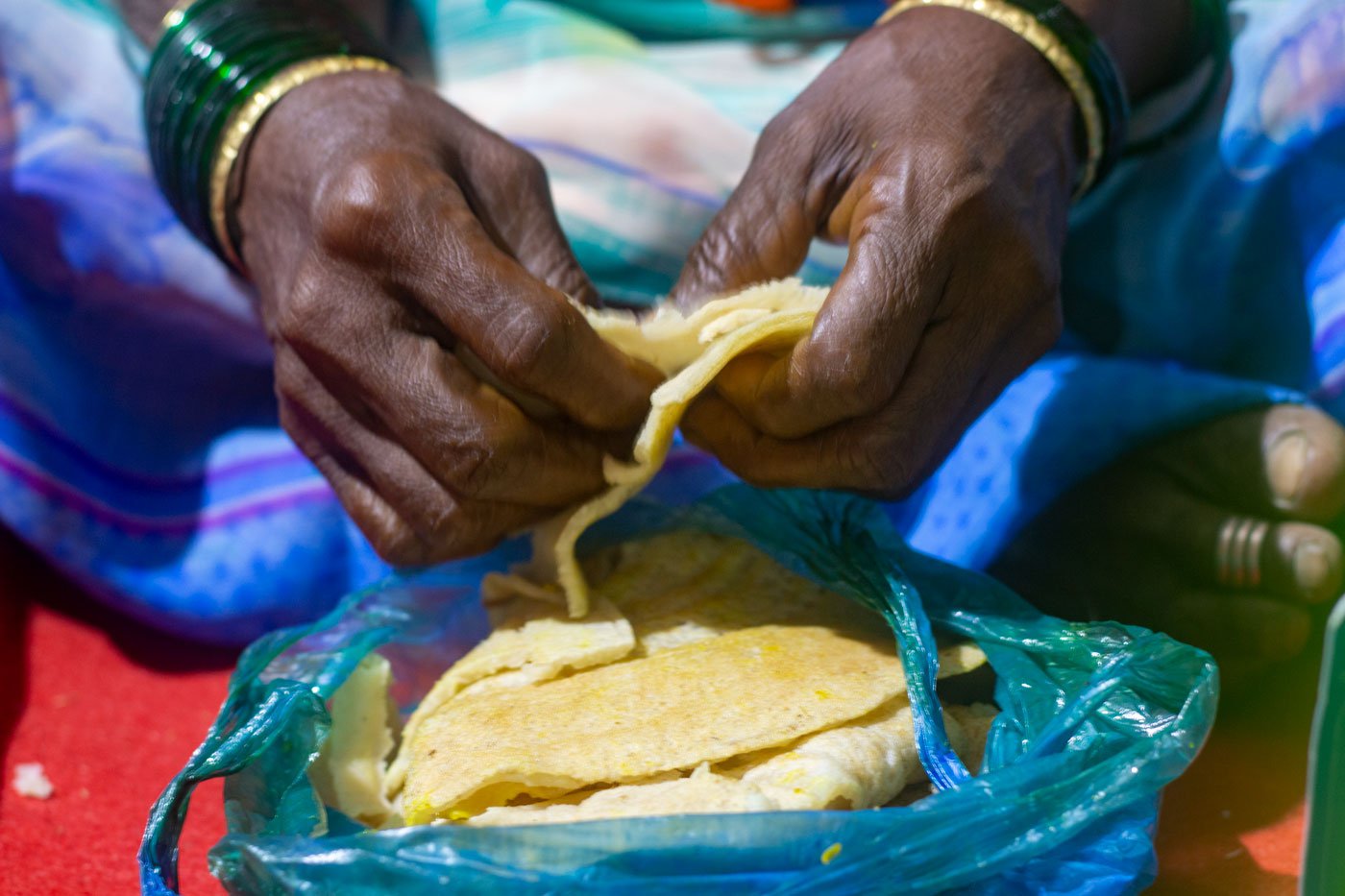 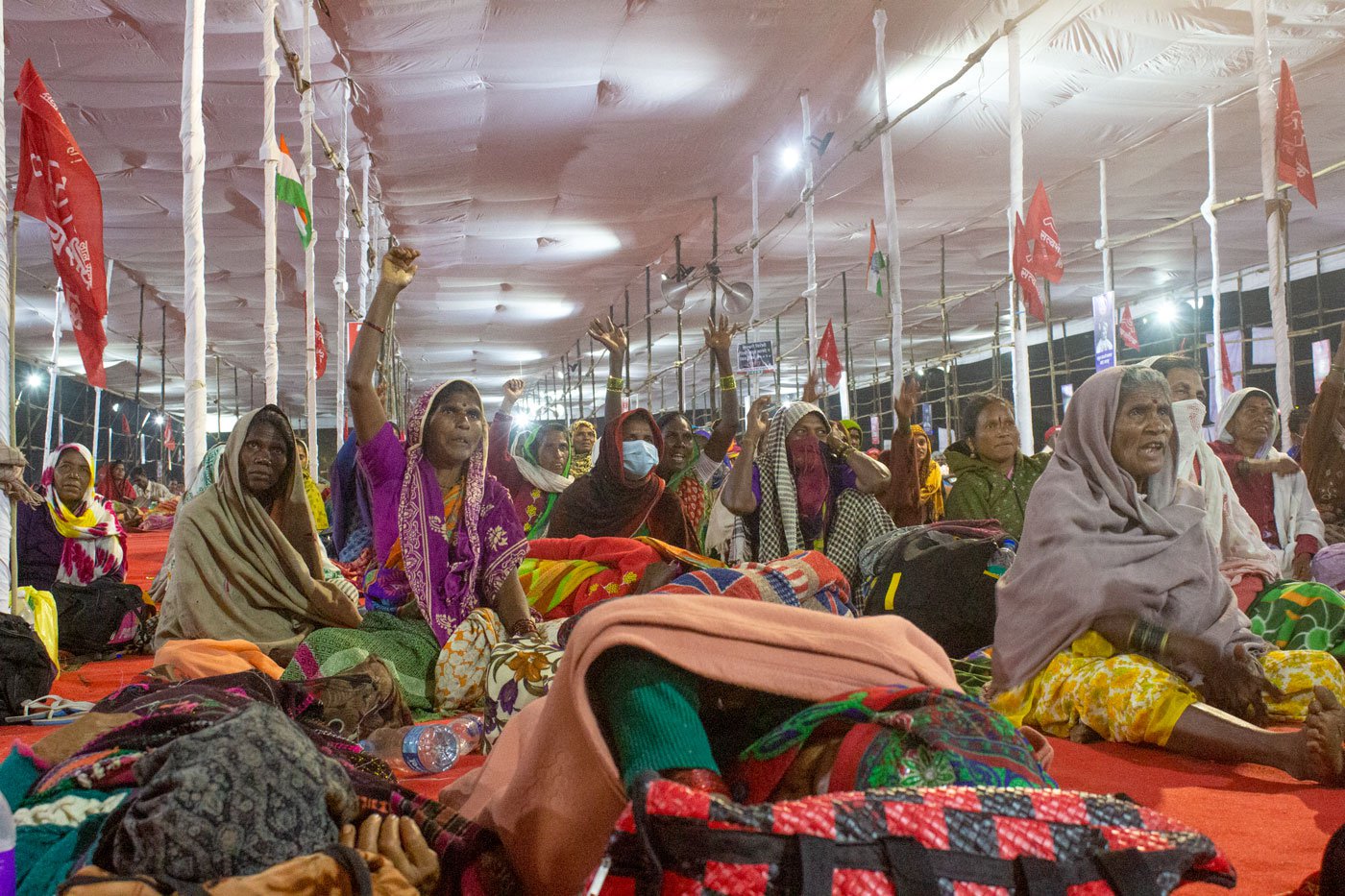 After a long day on January 24,, while some fall asleep, many energetically chant slogans late into the night 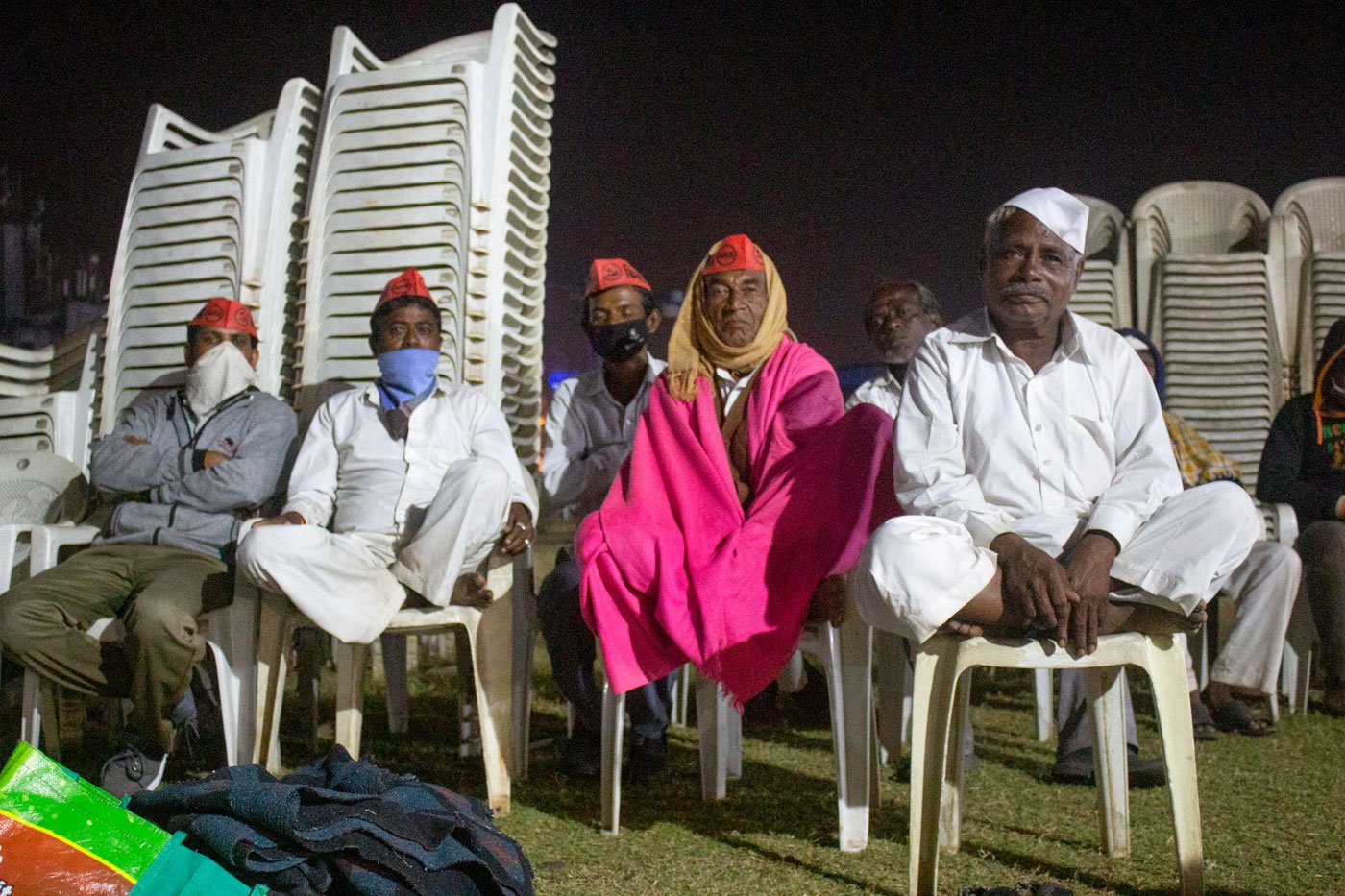 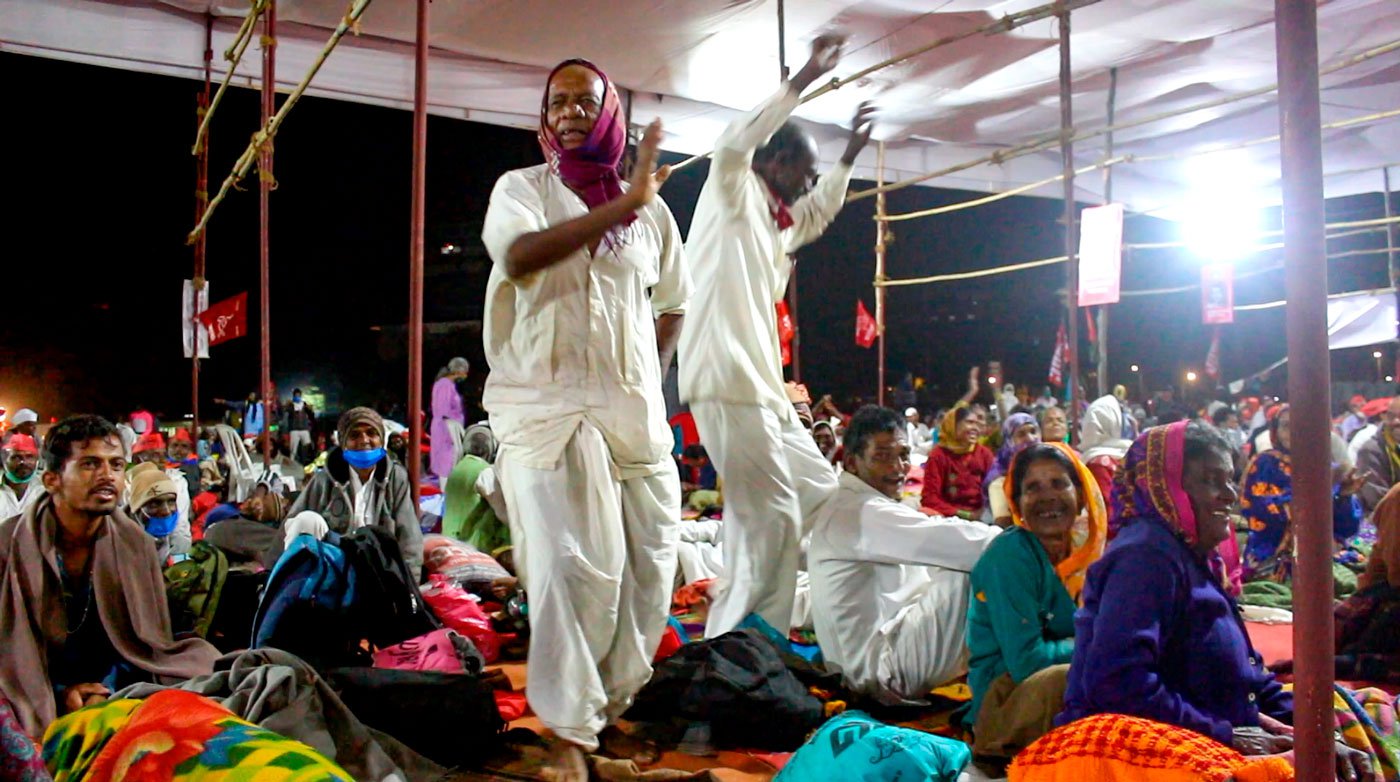 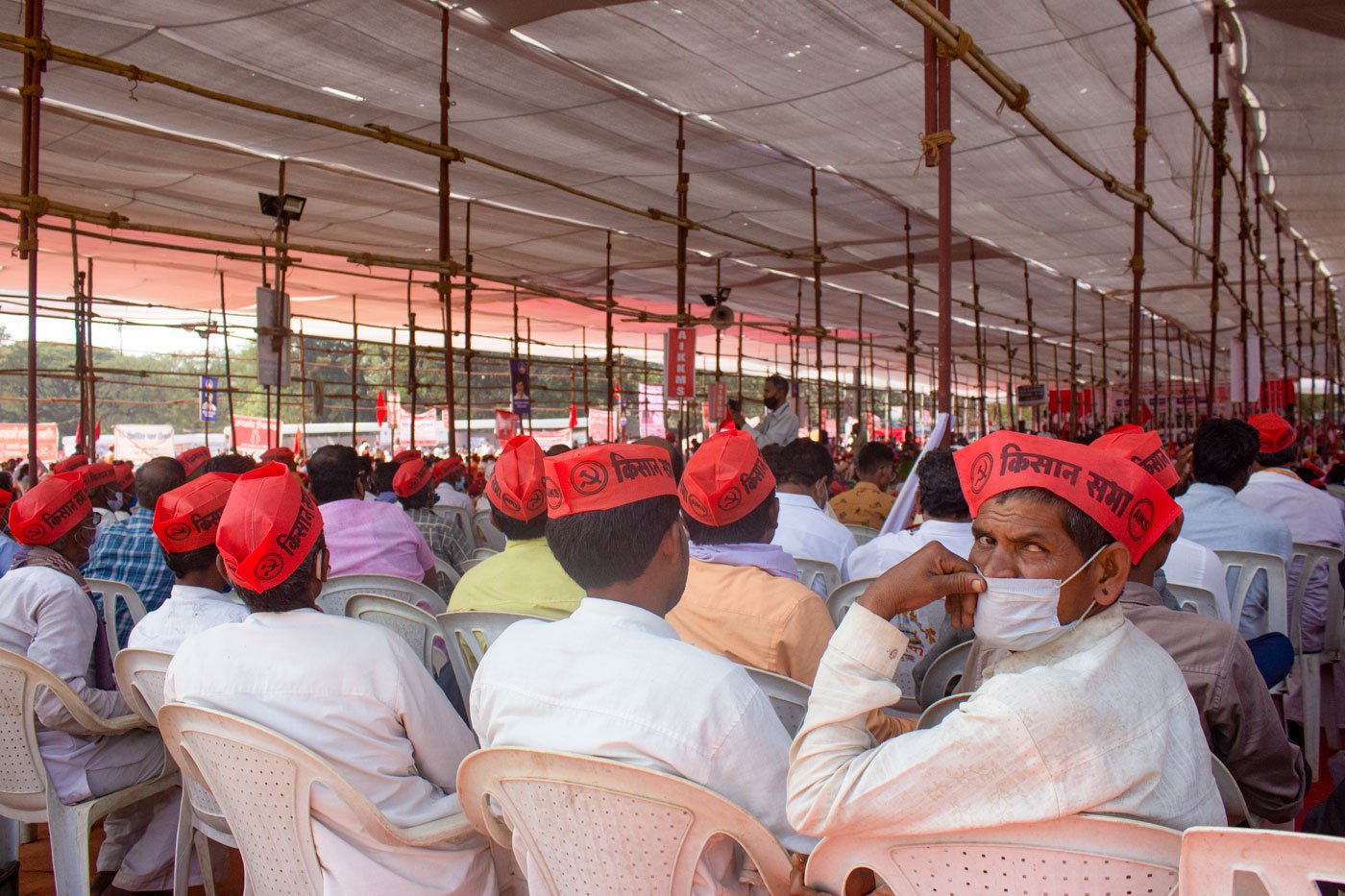 Farmers listening to speeches on the afternoon of January 25 before they move on for a proposed march to Raj Bhavan, the Governor's residence in south Mumbai. 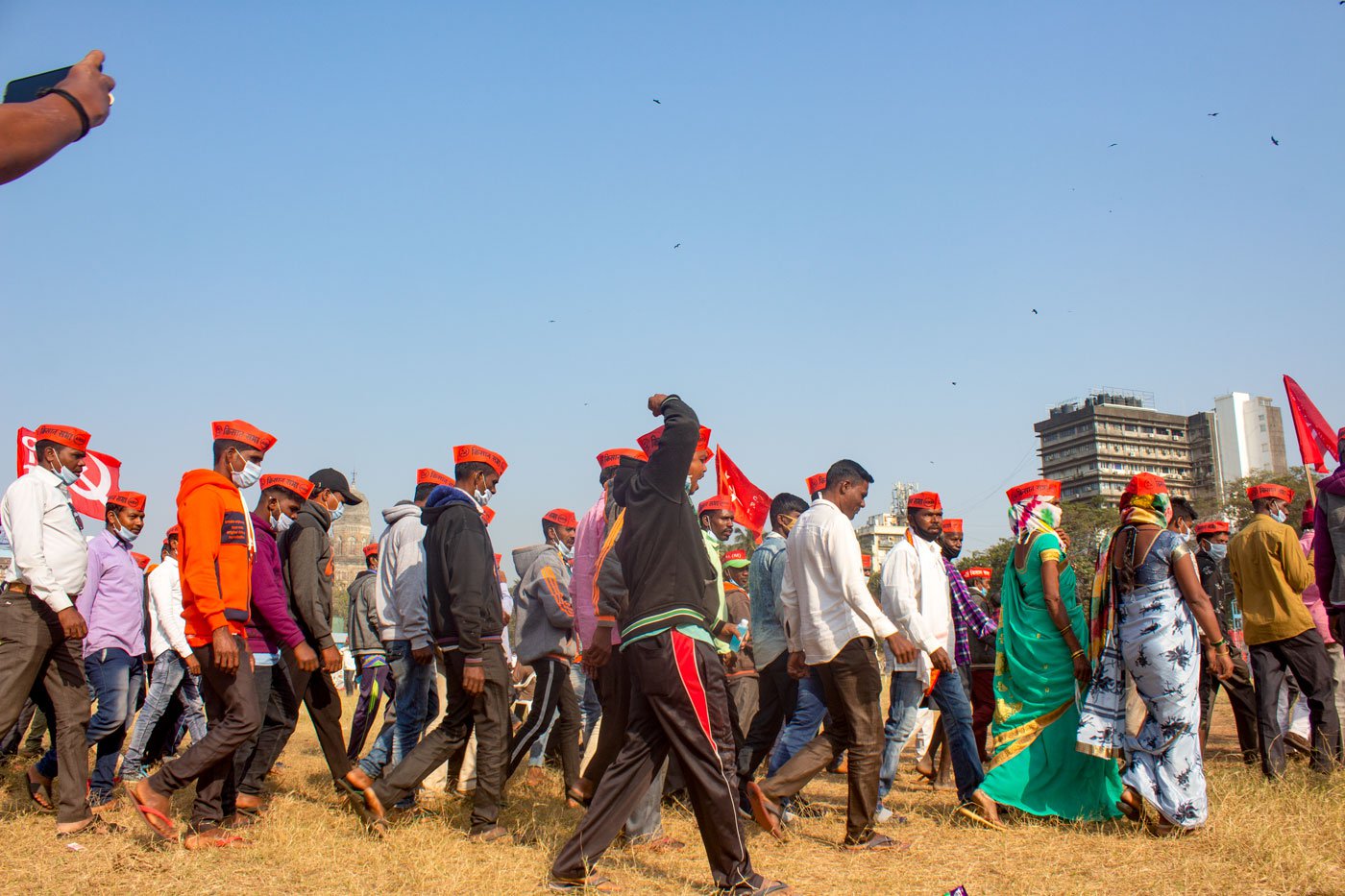 Leaving for Raj Bhavan from Azad Maidan in the afternoon of January 25 for a proposed march to Raj Bhavan, the Governor's residence in south Mumbai. (The march was later cancelled because permission was not granted by the city authorities.) 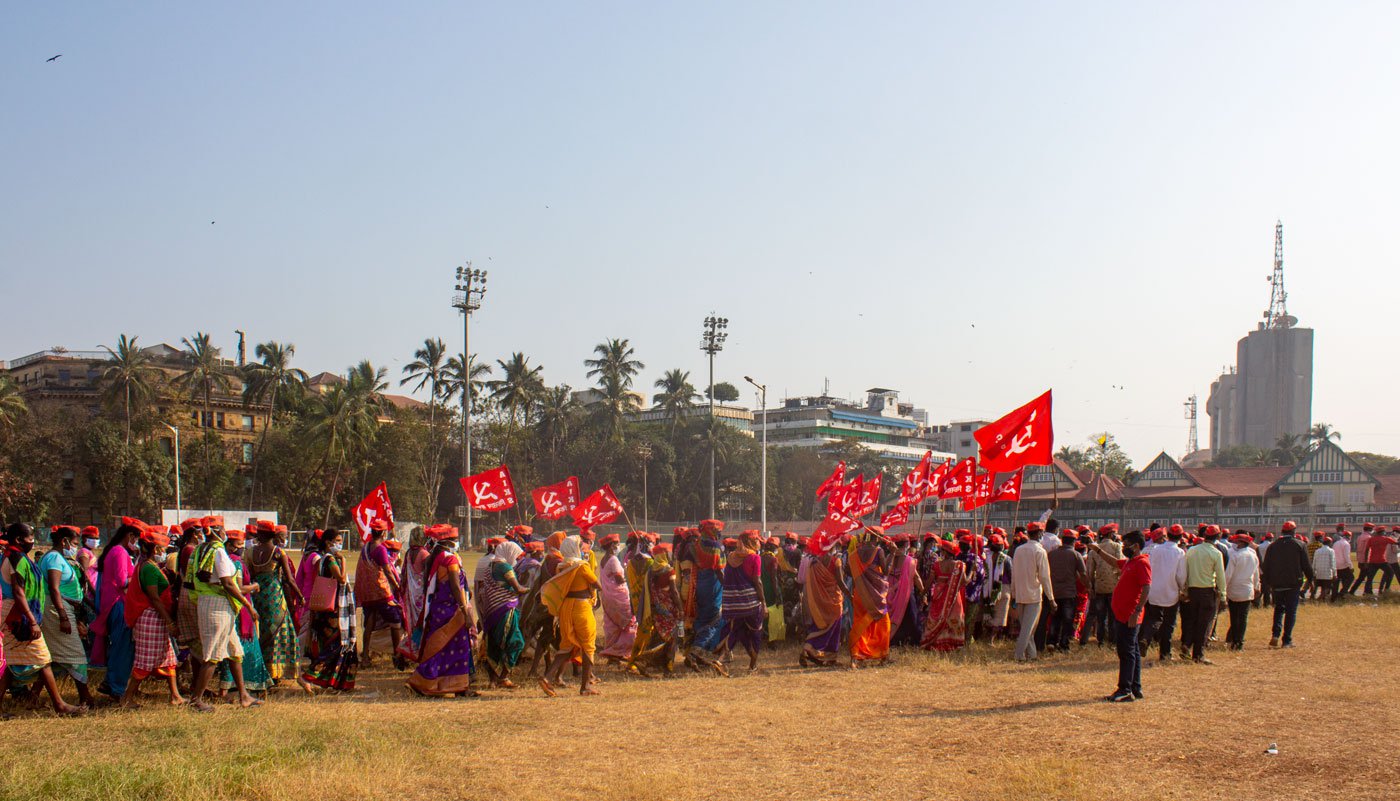 Leaving for Raj Bhavan from Azad Maidan in the afternoon of January 26 for a proposed march to Raj Bhavan, the Governor's residence in south Mumbai. (The march was later cancelled because permission was not granted by the city authorities.) 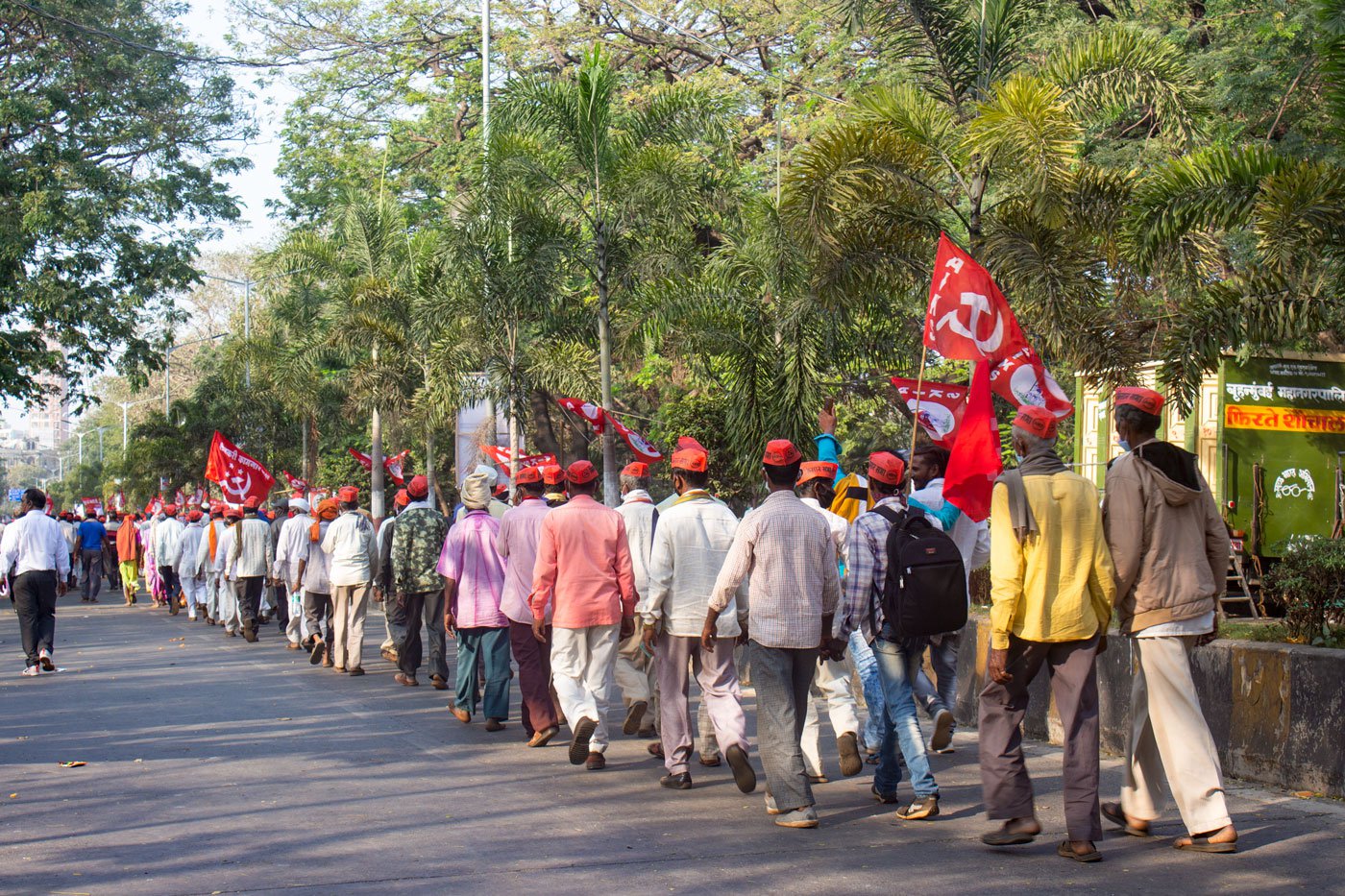 On January 25, around 4 p.m., the farmers are back on their feet, to march towards Raj Bhavan, the Governor’s residence in south Mumbai. But permission is denied, they walk some 500 metres, and return to the maidan .