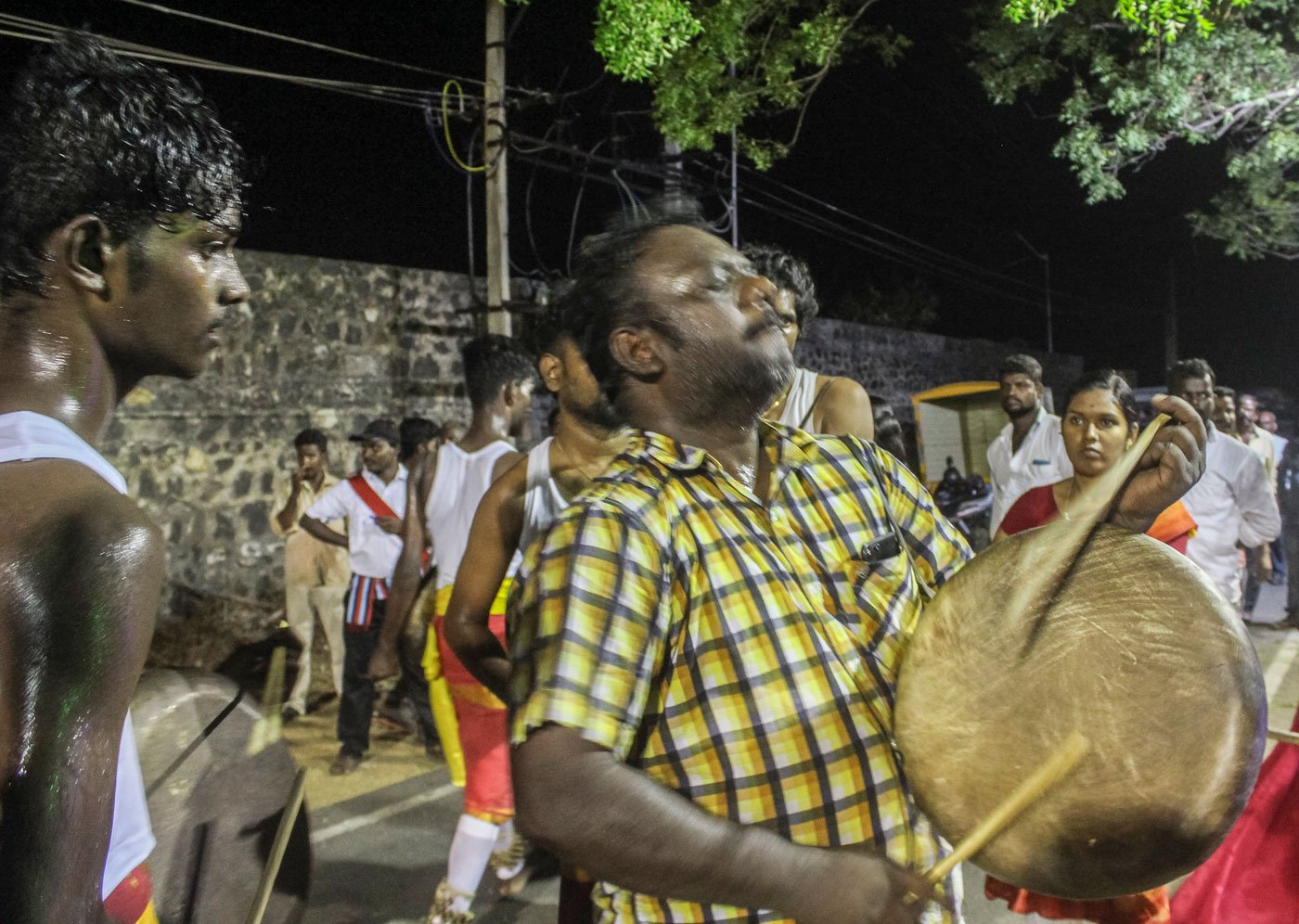 “Can you really enforce a curfew on an art form?” asks Manimaran, in a matter-of-fact tone. “We ought to have been in Bangladesh this week” he adds, after a pause. “It could have been a big moment for the 12 of us who were supposed to go. Instead, all our programmes for March and April were cancelled.” But the 45-year-old Parai artist and teacher – one of the finest in Tamil Nadu – cannot remain idle.

So Manimaran and his wife Magizhini continue to perform under lockdown – on Facebook Live every day, or on recorded videos on YouTube.

Covid-19 may have put a spoke in the plans of his troupe for two months, yet Manimaran – like he always does – has come up with a song that seeks to create awareness on the virus. Penned by the performer and sung by his wife Magizhini, with Subramanian and Anand joining in the chorus, the song has been received well. “A radio station in Dubai picked it up,” he says, “and even put it on their YouTube channel.”

Running one of the most successful folk art troupes in Tamil Nadu – Buddhar Kalai Kuzhu (Buddhar Art Group, started in 2007) – Manimaran has been training hundreds of aspiring learners every year in playing Parai, a drum that was once played only by Dalits, and only at funerals. Today, thanks to the efforts of performers like Manimaran in reclaiming its politics, Parai is more an instrument as well as art form of liberation.

“However, there are still people who continue to play Parai at funerals, but who are not recognised as artists. Even the Kalaimamani awards [conferred by the state government] meant for folk arts hardly recognise Parai as an art form,” the performer complains. But Manimaran continues to take Parai beyond society’s thick veil of untouchability and indifference, persistently holding weekly classes and annual training camps. Those have drawn students from all walks of life – eager to learn the upbeat, energetic form on this percussion instrument. They also get to learn its politics. Of course, the physical camps have been suspended for the lockdown period.

Manimaran says he wrote the song on the virus after coming across a few Gaana (a Chennai folk art form) numbers that spread wrong information. “Some performers appear to have been misled by things they had come to hear. For example, the allegation that corona [virus] is spread through non-vegetarian food. But when there is already a strong political lobby against non-vegetarianism, using corona to further push that agenda is not right. So we had to come up with this song”.

Beyond that, Manimaran has always been among the first artists to respond to a crisis. “I believe art is political. It is important for artists to respond to what is happening around them in society. The folk and Gaana artists have done that, they have made artistic contributions when there is a crisis. More than responding to misinformation, our corona song is about creating awareness too.”

During the aftermath of the 2004 tsunami, and later when Cyclone Gaja left several districts across Tamil Nadu devastated in 2018, Manimaran had come up with songs and performances offering comfort to aggrieved survivors. “Folk art is essentially a people’s art form. It is our duty to be with the people when a calamity strikes them. We are not in a position to donate money, so we use our art to create awareness among the people,” says Magizhini about their latest song, called Corona Song . 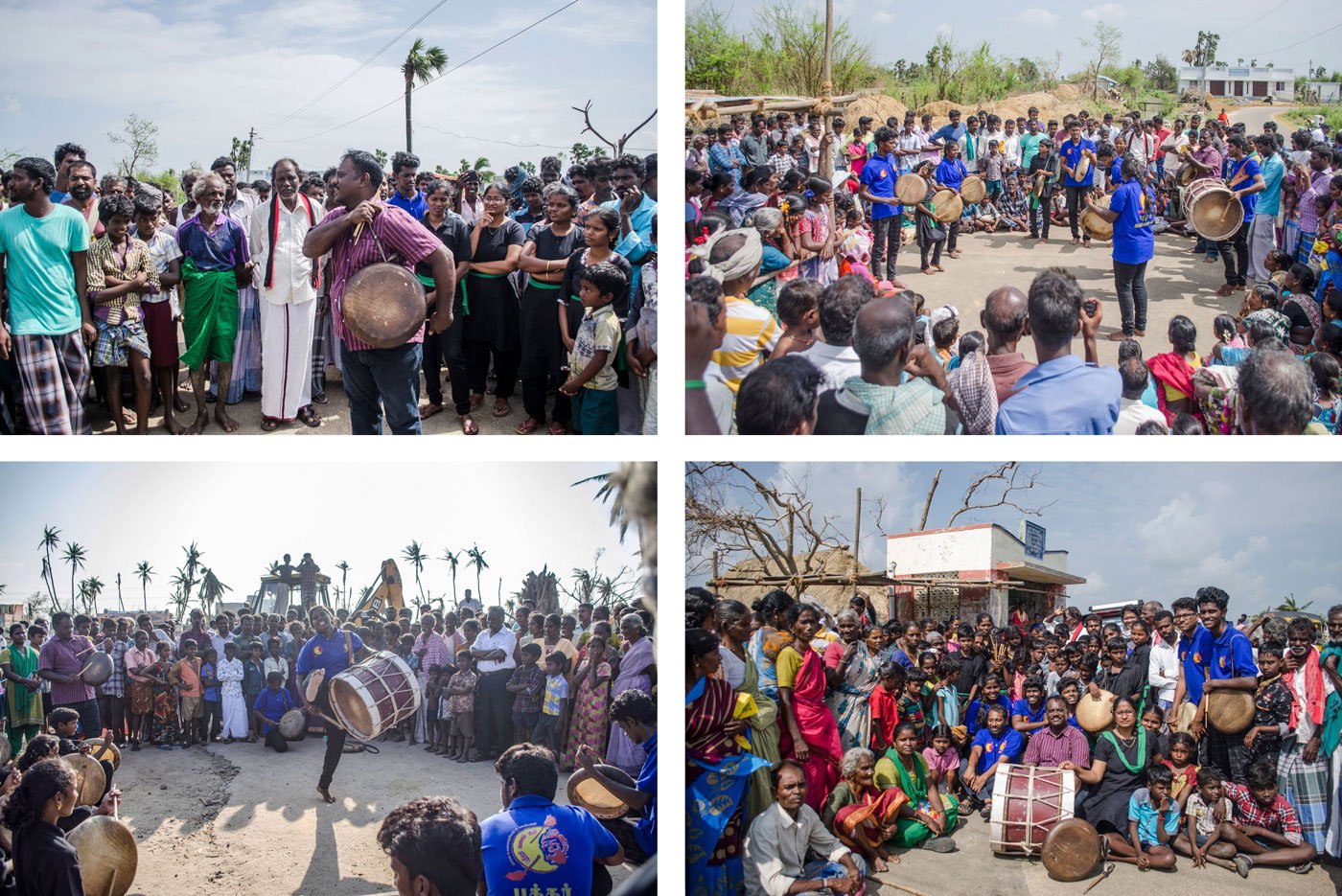 File photos of Buddhar Kalai Kuzhu performing in the areas of Tamil Nadu affected by Cyclone Gaja in 2018. The performances and songs offered comfort to the survivors

It is in some ways similar to what they did in the aftermath of the Gaja cyclone. Manimaran and his troupe visited area after area hit by Gaja, especially in the Cauvery delta region, and played Parai to attract crowds. Then they would continue to play Parai and songs that offered some solace. “I will never forget how one person walked up to us and said: 'We got all sorts of relief materials including biscuits and other stuff. But what you gave us removed the fear from deep within our souls'. What else do we need as artists?”asks Manimaran.

The couple, now staying at Thenur village in Alathur block of  Perambalur district, have been on Facebook Live every day, interspersing performances and short talks on Covid-19 and related issues. “We call the programme Corona Kumbidu [ Corona Namaste ]. We started it two days before the lockdown and intend to continue till it is lifted.”

On day one of this ongoing series, apart from the new song, Manimaran spoke about the plight of people living on the pavements in the times of coronavirus. On day two, he focused on those most vulnerable to the virus – the elderly. When he spoke of children on day three, Manimaran suggested reviving traditional games to keep them engaged. On day four, he drew attention to the transgender community and the crisis they might be facing in the lockdown period.

“We need to think of them not only now, but even on normal days,” he observes. “I say that in my Facebook Live, too. But when we say that now, when we speak of the psychological crisis that corona might have pushed them into, I somehow feel the message would be more powerfully conveyed.” 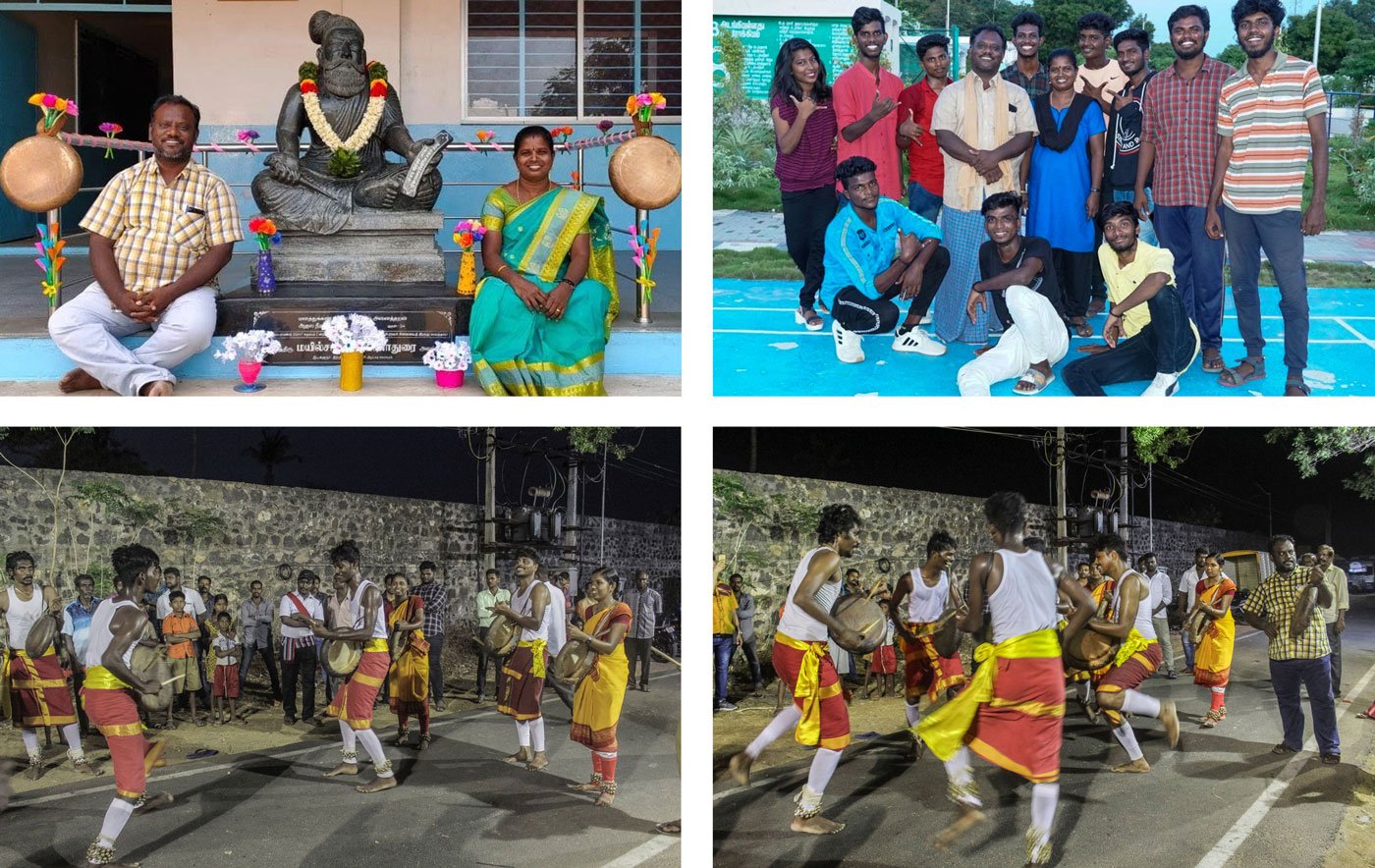 Top left: Manimaran and Magizhini flanking a statue of the classical poet Thiruvalluvar. Their troupe is creating a series on his Thirukkural poetry with Parai. Top right: The couple with Parai learners. Bottom row: Manimaran and his troupe members performing Parai at night (file photos)

Along with Payir – an organisation working for rural development in some villages of Perambalur – Manimaran hopes to create new games for children that would inculcate strong social values even while maintaining physical distance. “We have already started work on it, but for now we are more focussed on creating awareness about Covid-19 in our villages, because it is new and our people are clueless. We will soon work with Manimaran and Magizhini on such games for children,” says Preethi Xavier, the mentor of Payir.

These are particularly trying times for performers like them, admits Manimaran. “Folk artists, especially, are so used to being with people in the face of any crisis. So to maintain this physical distance, to remain aloof, is somewhat troubling.” The government ought to provide some relief for folk artists who stand to lose out on work, he says. “In turn, we could do our performances on social media. Economically, folk artists are really so badly hit that this government should consider something like that,” he says, earnestly.

But relief or no relief, Manimaran and Magizhini will continue to play Parai and sing – to ward off your coronavirus fears every day. “We will continue to insist on being aware, and do our best to stop the spread of the virus. And when corona finally leaves us with a kumbidu , we will celebrate it with our Parai.”

There are many people
Spreading baseless rumours

Indifference won’t help
There is no need to fear

To stop corona from nearing you
Cover your nose

Only awareness
Shall stop corona

If we maintain physical distance
Corona too shall run away

Corona is not spread
By eating non-veg food

Corona does not spare
Even those who are vegetarians

All countries
Are in a state of shock

There is research going on
To find its roots

Have food that boosts your immunity

Defend yourselves
Throw away the lies

If everything lasts for eight days
It could be corona

All you should do is seek medical help
To mitigate corona