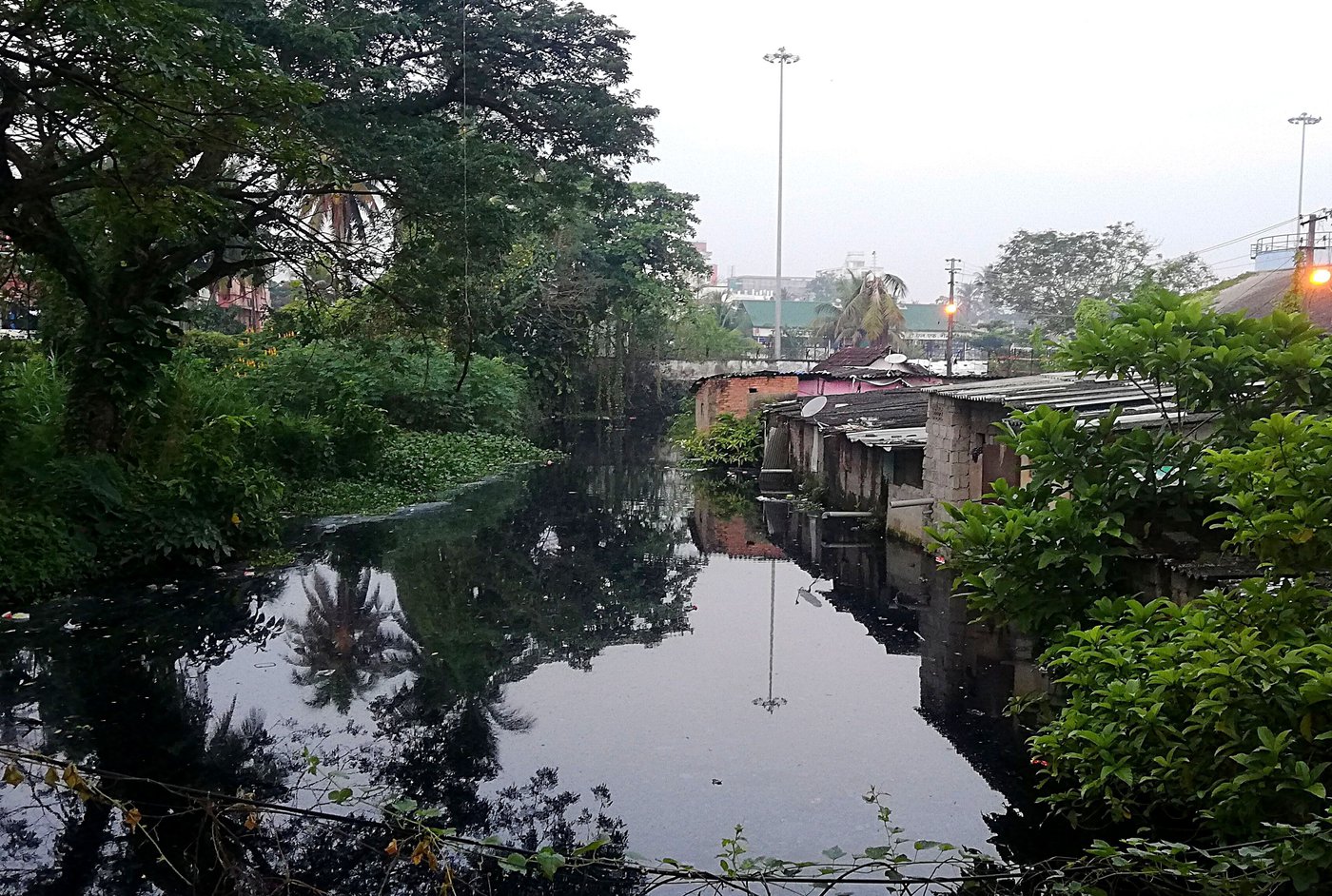 Kochi's Thevara Perandoor canal, once an inland waterway, is now choked with sewage. Monsoon floods are frequent, and daily wage workers and others living on the banks have waited for years to be relocated

As Sathi Mani gets ready to turn in for the night, she looks around her house and does a quick check: her important documents and best clothes are wrapped in plastic and hung on the walls; cooking utensils are on cement slabs two feet above the ground.

“I have woken up many times at 2 a.m. to find water flooding my home. I’ve lost count of the pillows and bedsheets I have had to throw away because of black stains and the stench which remains even after washing,” said Sathi, a 65-year-old resident of P&T Colony in Gandhi Nagar, which runs along one side of the Thevara-Perandoor (TP) canal in Kochi, Kerala.

The TP canal flows from Perandoor Puzha in the north to Thevara in the south of Kochi. It travels a distance of about 9.84 kilometres before draining into the city’s backwaters. The canal is one of 11 major waterways that run through Kochi, some of which the state plans to promote as waterways to ease the traffic congestion in and around Ernakulam.

Over the last three decades, as Kochi city has doubled its population to 2.1 million , the less-than-a-metre-deep TP canal has deteriorated into an open sewer; it is blocked at two places by metro construction work and lack of inflows. The waste from hospitals, local markets, industries and houses that line the canal, empties directly into it. About 632 outlet pipes and 216 street drainage channels flush raw sewage, industrial effluents and rain water into the canal. With dry waste lining the banks, the width of the canal has shrunk to a mere 8 metres in places.

Sathi’s house, like all the others in the P&T Colony, is located on the canalside, behind the Ernakulam Junction railway station. The colony occupies a roughly 250-metre stretch of poramboke land (unoccupied tracts that are the property of the government or reserved for public purposes). Residents here say that building a makeshift home on poramboke land was a cheaper option than renting. Over time, they replaced their thatch and tarpaulin homes with semi pucca houses, using concrete blocks and tin roofing donated by the local parish two decades ago. 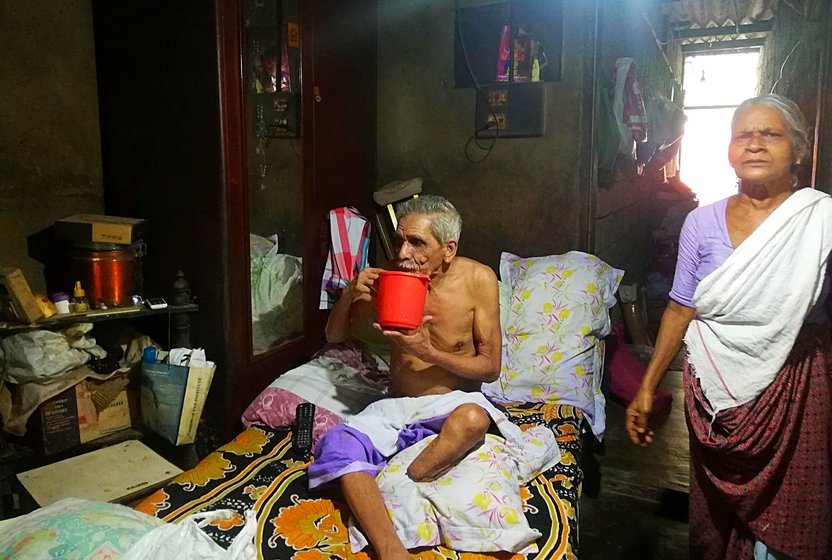 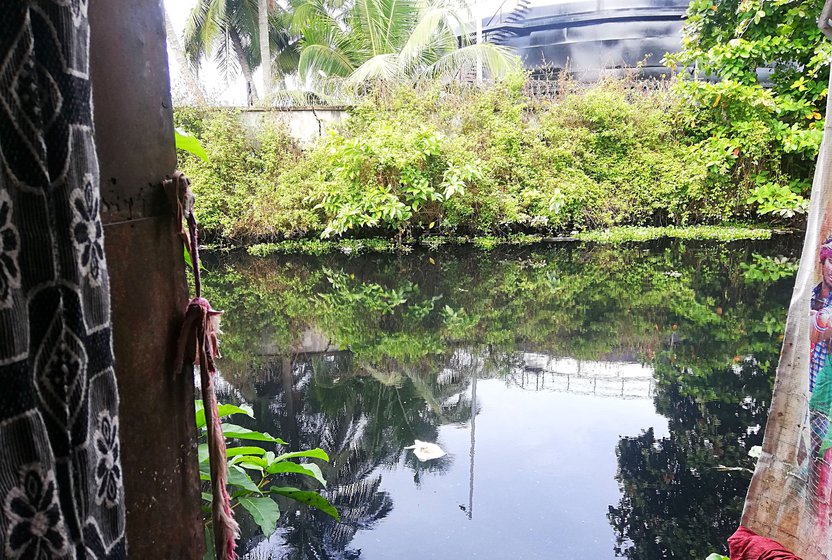 'I have woken up many times to find water flooding my home', says Sathi; she and her husband Mani live next to this canal where all the waste of the area is dumped

“When I first came [here] the water was clear and we would get the occasional good catch of fish. People sometimes sold the fish. Today there are no fish, only sewage pipes flowing into it,” said Sathi, pointing to the dirty grey water in the canal behind her house. The kitchen and toilet waste of all the houses runs directly into the canal. “Each time I step into the filthy water, I get rashes on my legs,” she added.

Sathi used to be a domestic worker. “I worked in two houses and earned up to Rs. 4,500 a month. When the canal would flood, I couldn’t leave my home and would lose that day’s wages. I would end up spending the day cleaning and clearing the filth of torn plastics, raw sewage and grease from the nearby bus depot, brought [into my house] by the water,” she said.

Her husband K.S. Mani, 69, used to work as a daily wage labourer. During the pilgrimage season he would rent a small makeshift tea and snacks shop outside the Sabarimala temple in Pathanamthitta district, 160 kilometres away. Sathi says his regular earnings of Rs. 3,000 from daily wage work could go up to Rs. 20,000 during the few months of the pilgrimage season – November to February.

Mani has been confined to his bed for a few years now. He is diabetic; after an infection, some years ago, the lower part of his left leg had to be amputated. The couple spends up to Rs. 2,000 a month on medicines for his asthma and diabetes treatment. “We are both eligible for the state’s old-age pension of Rs. 1,400 each. Mani hasn’t been able to access his pension for four months now. His hand coordination is weak and he can’t sign his name properly,” Sathi said. Her pension – her only source of income now – is credited into her Union Bank account, at a branch two kilometres away. This is her

Originally from Paravur in the north of Kochi, Sathi came to live in P&T colony when she married Mani 46 years ago. Explaining their choice Sathi said, “This location provided us easy access to the city and we saved on travel costs.” 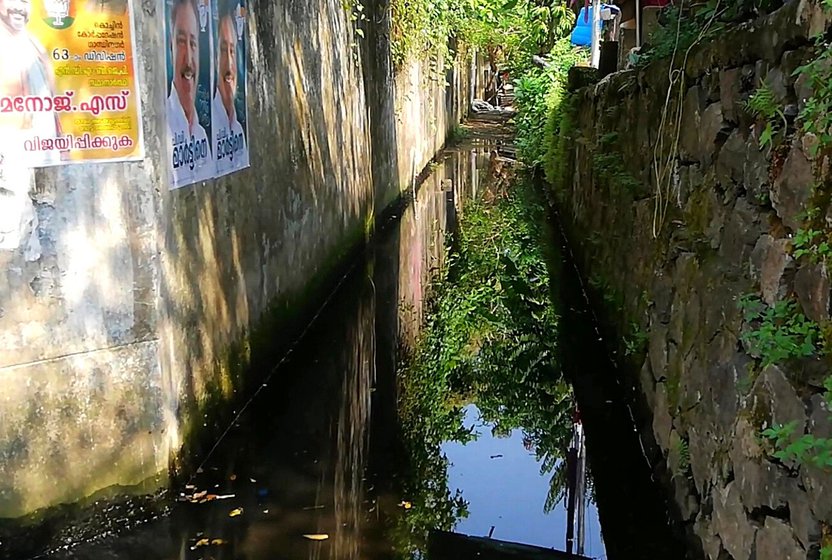 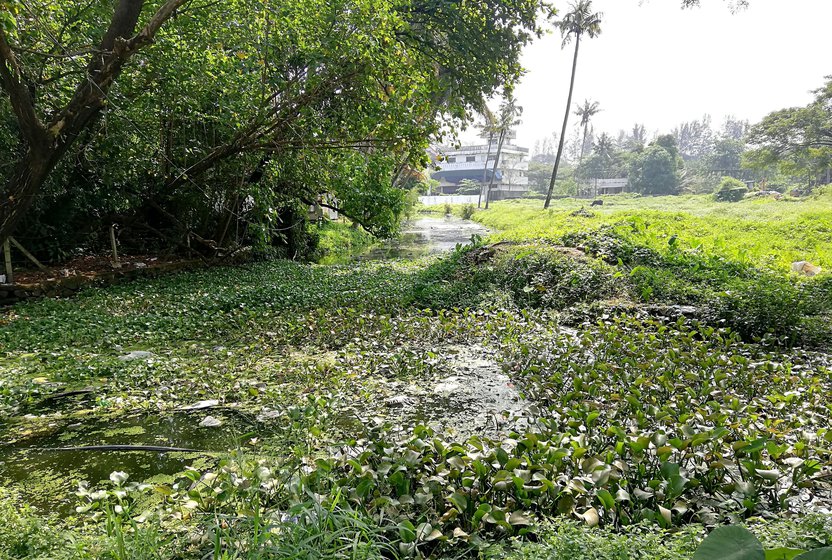 Mani’s sister Thulasi Krishnan, 61, is their neighbour. “When we first came here about 50 years ago, there were only a couple of houses, now there are 85 houses and 81 families live here,” she said. A recent survey for local elections has given all residents, here access to colony details.

Thulasi’s osteoporosis makes it difficult for her to stand up and walk. “Whenever it rains heavily, I find it difficult to wade through the water to reach the main road [on higher ground]. So my husband and I shift to our daughter’s house. But how long can we stay with them?” she asked. Her daughter Rekha Sajan lives in Gandhi Nagar, a kilometre away from P&T colony.

The colony land belongs to the municipal body – Greater Cochin Development Authority (GCDA). According to the residents, ‘P’ and ‘T’ stand for ‘power’ and ‘telecommunications’; there is a Bharat Sanchar Nigam Limited (BSNL) depot just 50 metres away.

Aajira, 72, lives alone in a house that belonged to her late daughter and son-in-law. She had a small store selling groceries near the road but says the government demolished it. She now sells a few items from her home, earning about Rs. 200 a day. “Many people here buy on credit so it’s difficult [to keep track]. With my paralysed leg and breathing troubles, it is hard to walk and purchase more stocks,” she said.

Kerala receives an average rainfall of around 2855 mm over the southwest monsoon season (June to September). The monsoon deluge clogs Kochi’s street sewage system with mud and plastic. Rainwater from the flooded roads end up in the canals that overflow with the onslaught – bringing the black, dirty waters right into the homes of the residents of P&T colony. High tide used to increase the volume of water and dilute the sewage, but an increase in built-up areas on the banks and bridges with low vertical or horizontal clearance have all but stopped the inflow of sea water in many parts of the canal, leaving it to stagnate. 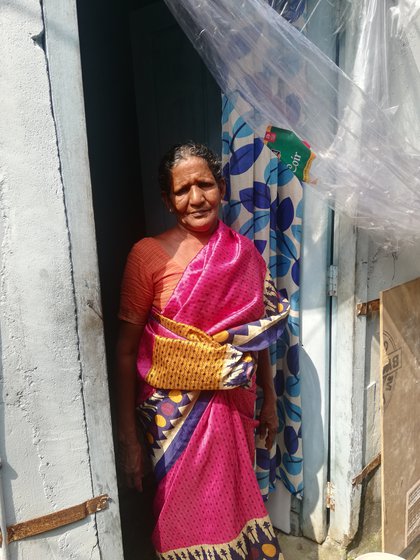 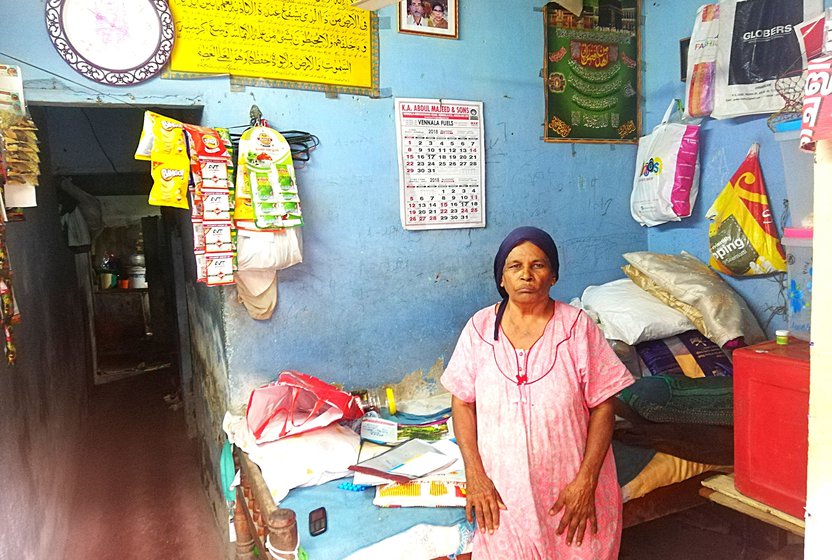 Left: Mary Vijayan remembers a time when her brothers swam in the canals. Right: Aajira's small grocery store was demolished by the government

The stagnant water encourages the rapid growth of invasive weeds such as the water hyacinth (Eichhornia crassipes), which swiftly takes over and impedes the flow of water. It also encourages the breeding of mosquitoes and flies. Snakes and rats are common visitors, slipping in through toilet pipes. “Rats get into my steel almirah and they’ve destroyed many of my clothes,” said Sathi.

A study by the Kerala Shipping and Inland Navigation Corporation, published in January 2017, notes that the canal is hampered by “siltation, low-level bridges, encroachments and settlements.” It also observes that “widening of the canal is necessary for the flow of water and to develop the waterway as a feasible mode of transportation.”

Sathi’s neighbour Mary Vijayan remembers a time when her brothers swam in the canals. She and her husband Vijayan K., who was a porter at the nearby railway station, have been residents of the colony for 30 years. They moved here from Kochi after they were married. “The canal is actually a tributary of the Perandoor Puzha. People went to it for washing and bathing. The water was so clear that we could see a one-rupee coin lying on its bed. Now, it’s impossible to spot a corpse,” said 62-year-old Mary, wryly.

She was sitting on the floor of her house counting some lottery tickets when we met her. “I used to earn 100-200 rupees a day selling these tickets around the railway junction,” she said, coming to the door to talk to us. But since the pandemic began, ticket sales have been erratic.

“The government has been making plans for many years to permanently rehabilitate the colony’s residents in Mundamveli [about 10 kilometres away],” said Ajith Sukumaran, a daily wage labourer. “I’ve been hearing about the proposal since when I was not even 10 years old. Now I have two children and nothing has moved.” Ajith’s wife Soumya is a domestic worker, earning around Rs. 6,000 a month and he earns around 800 rupees a day, but rarely gets more than 15 days of work in a month. They both financially support Ajith’s parents – his mother Geetha, 54 and his father K. Subramaniam, 60 – who live next door. 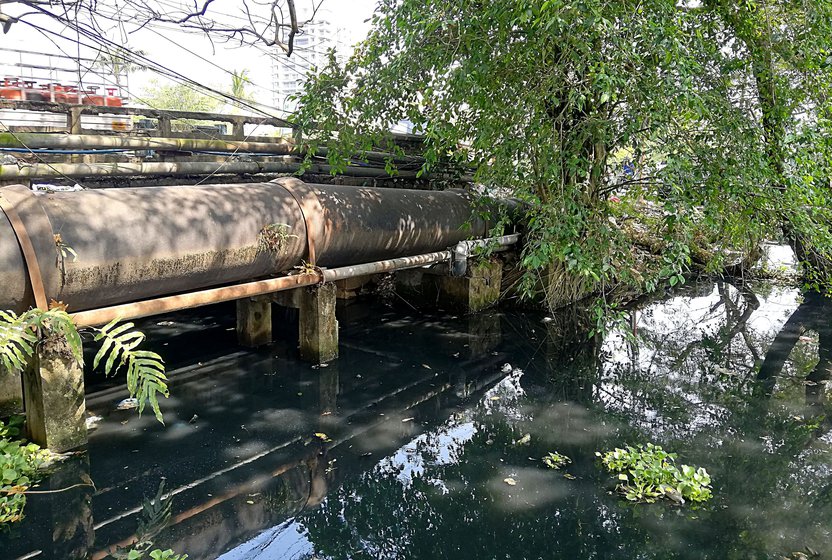 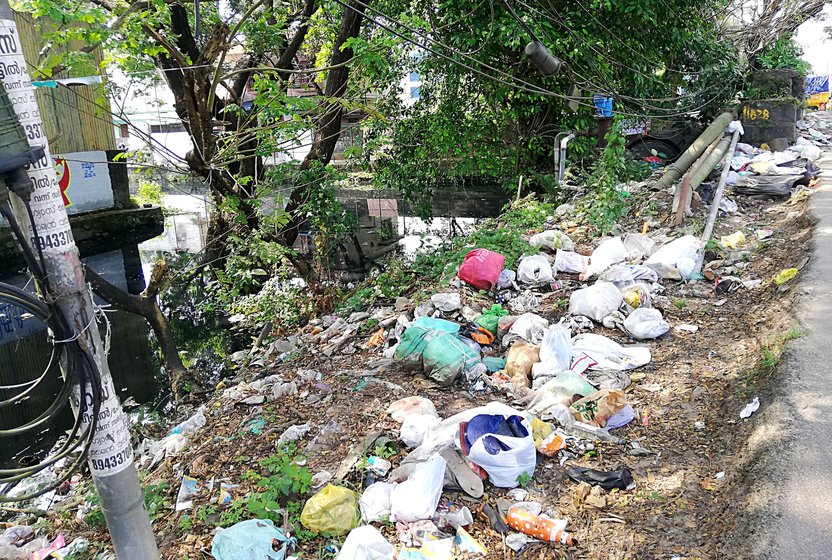 Left: A bridge on the canal that reduces its width and slows down the flow of water. Right: Waste dumped by Kochi city residents on the canal banks

“On July 31, 2018, the councillor Poornima Narayan [Gandhi Nagar ward councillor from 2015 to 2020] arranged a bus to take one of us from each family to Mundamveli. They collected Rs. 100 per family from us for this transport. Then they laid a foundation stone at the site and Pinarayi Vijayan [the chief minister of Kerala] promised us that it would be complete within 10 months,” Sathi recalled.

Nearly three years have passed since then and the residents say occasional relief camps are the only support they have seen. In 2019, Ernakulam was pounded by 2375.9 mm of rainfall (17 per cent higher than the normal 2038mm in the southwest monsoon period) and was flooded between 8 and 15 August. Thousands of people living in low lying areas had to be evacuated to higher ground. The rain caused the TP canal to flood. “Our neighbours and I had to carry Mani on our shoulders to the relief camp,” Sathi recounted. “It was very difficult to manoeuvre because there is barely space for two people to walk side by side in the alley between the high fence [of the telecommunications depot] and our houses.”

In the run-up to the local elections in December 2020, the promise of rehabilitation within a 10-month framework was brought up by candidates. Subsequently, the GCDA planned to build 88 apartments in Mundamveli under the Life Mission project of the Kerala government to construct houses for both ‘landless’ and ‘those unable to complete housing’. However, the company entrusted with supplying materials for the project went bankrupt and all production and plans ceased. “Now a new proposal has been made and we have completed the test piling. We are waiting for clearance from the technical committee of the Kerala government,” said V. Saleem, chairperson of the GCDA.

The colony’s residents, however, are sceptical. “No one visits to check on us here,” said Thulasi. “Just like the visit to Mundamveli vanished from our memories, so did the officials.”

Adarsh B. Pradeep is studying print journalism at the Asian College of Journalism, Chennai

Other stories by Adarsh B. Pradeep