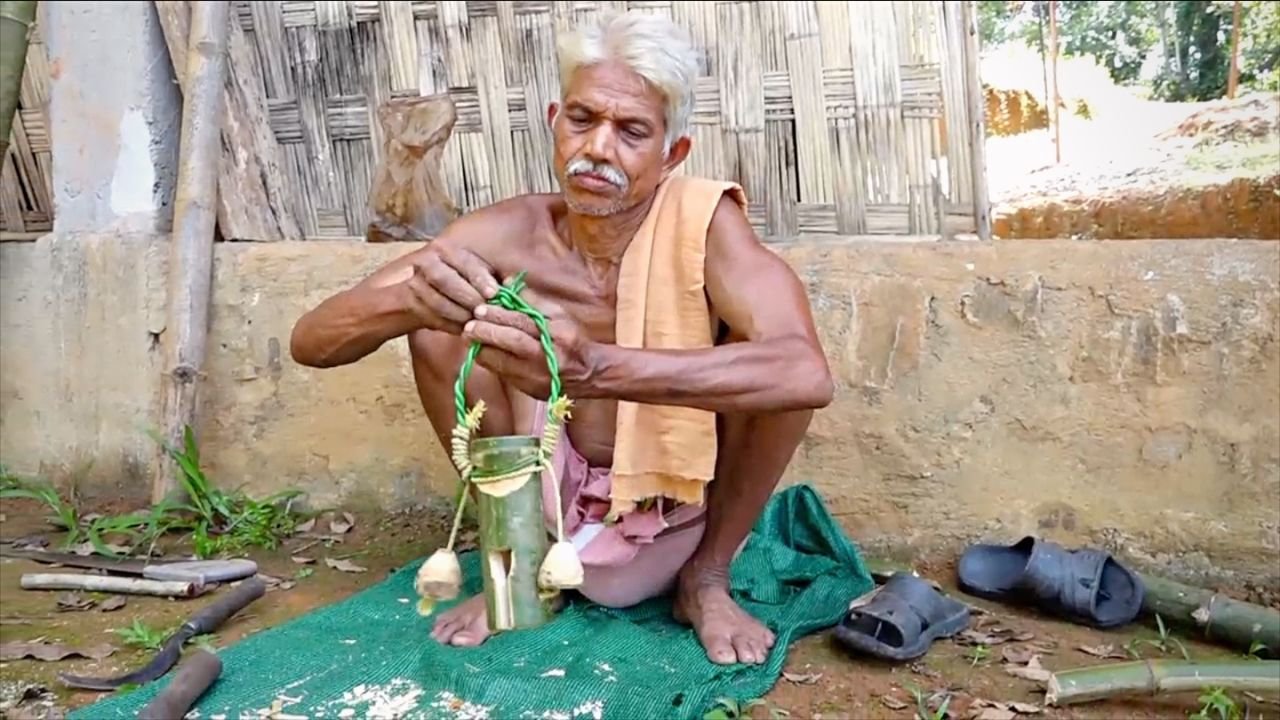 One of the last remaining artisans of bamboo cowbells in Shibaje village, in Dakshina Kannada district of Karnataka, explains the intricate nature of the craft in this video

The tain-tain-tain sound of cowbells is now hardly heard in the undulating and hilly terrain of Beltangadi taluk in Dakshina Kannada district. “No one is making these bells anymore,” says Hukrappa. But it isn’t the common cowbell he’s talking about. In his village, Shibaje, the bell tied around a cattle’s neck is not made of metal – it is handmade with bamboo. And Hukrappa, an areca nut farmer in his late 60s, has been crafting the unique object for years.

“I was a cattle grazer before,” Hukrappa says. “We would lose track of the cows sometimes, and so the idea of making cowbells with bamboo came up.” The sound of the bells would help them locate the cows that wandered away in the hills or strayed into others’ farms. So when an elderly man in the village offered to teach him the craft, he started out by making a few. In time, he became skilled at making bells of varying sizes. It helped that the bamboo was within easy reach – his village in Beltangadi falls in the reserve forest of Kudremukh National Park, in the Western Ghats of Karnataka, which is home to three species of the grass plant.

Called ‘ bomka ’ in Tulu, the language Hukrappa speaks, the bamboo cowbell is known as ‘ monte ’ in Kannada. It has a special significance in the cultural life of Shibaje, where the Durga Parameshwari temple is known for the tradition of offering monte s to the deity. The temple precinct is even called ‘Montethadka’. Devotees pray for their cattle’s protection and to have their wishes fulfilled. Some of them get the bamboo cowbells made to order from Hukrappa. “People buy this for harke [votive offering]. When a cow doesn’t produce a calf [for example], they offer it to the deity,” he says. “They pay up to 50 rupees for a piece. The larger bells sell for up to 70 rupees.”

Watch the video: The cowbell maker of Shibaje

Before Hukrappa turned to farming and craft making, cattle grazing was his only way to earn a living. He and his elder brother grazed the cows that belonged to another household in the village. “We did not own any land. We were 10 of us in the house, so there wasn’t ever enough food. My father worked as a labourer and my elder sisters also went out to work,” he says. Later, when a local landlord offered the family a vacant piece of land to cultivate on tenancy, they started growing areca nut (betel nut) there. “A share was given to him as rent. We did this for 10 years. When Indira Gandhi enforced land reforms [in the 1970s], we got ownership of the land,” he says.

The income from the cowbells hasn’t been much, though. “No one else is making them in these parts anymore. None of my children have learned the craft,” Hukrappa says. And the bamboo, an easily accessible forest resource once, is dying now. “We have to  walk 7-8 miles [11-13 kilometres] to find it now. Even there it may survive only a few years,” he says.

But in Hukrappa’s skilled hands, which cut and slice the tough grass, carving it into the desired shape, bamboo bell making is still alive in Shibaje – its sound still reverberating in the forests of Beltangadi.

Vittala Malekudiya is a journalist and 2017 PARI Fellow. A resident of Kuthlur village in Kudremukh National Park, in Beltangadi taluk of Dakshina Kannada district, he belongs to the Malekudiya community, a forest-dwelling tribe. He has an MA in Journalism and Mass Communication from Mangalore University and currently works in the Bengaluru office of the Kannada daily, ‘Prajavani’.

Other stories by Vittala Malekudiya