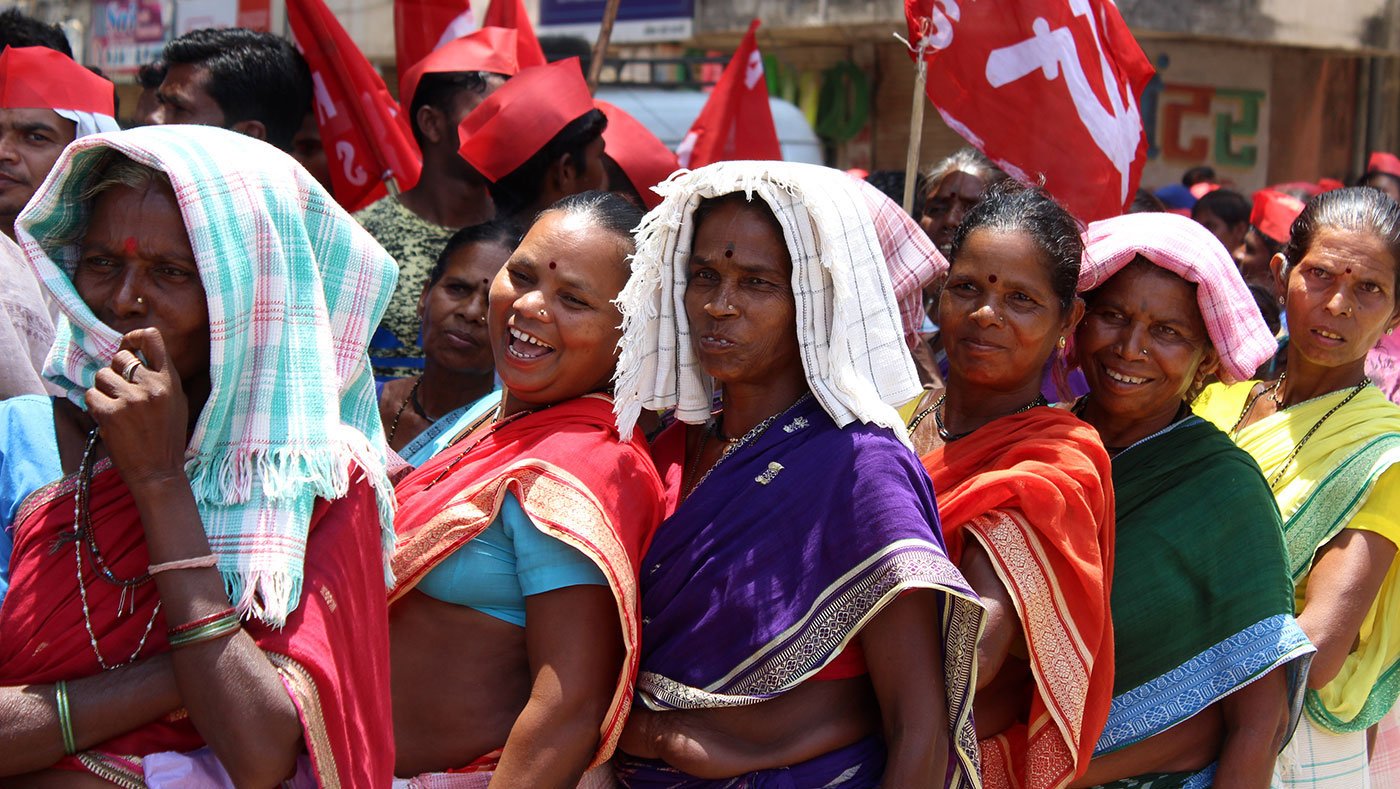 ‘Forest officials cut and take away our crop’

On May 3, to follow-up on the landmark Long March from Nashik to Mumbai, 35,000 Adivasi farmers gathered in Dahanu for a victory rally, signalling their determination to continue the fight for their demands

“We will bring out more morcha s until all our demands are met,” says the soft-spoken Vijaya Andher, as she walks in the sizzling May heat at noon. With her are around 35,000 other Adivasi farmers from Thane and Palghar districts, around 100 kilometres north of Mumbai.

Earlier this year, Vijaya, a farmer from Borala-Aghai village in Shahapur taluka of Thane district, had marched from Nashik to Mumbai – from March 6 to 12 – in the historic Long March led by the All India Kisan Sabha (AIKS), an affiliate of the Communist Party of India (M). Last week, Vijaya was back on the street for another march called by the AIKS, this time a Nirdhaar March, a victory rally of Adivasi farmers signalling their determination to continue the fight for their demands.

“This is a follow-up to the Long March,” says Ashok Dhawale, president of the AlKS, “to keep up the pressure on the state government to implement its written assurances about the Forest Rights Act and other issues.”

The other issues, he said, include stoutly opposing the government’s plans to acquire land for projects such as the proposed Mumbai-Nagpur Samruddhi Highway. The state had violated its assurance that land would be acquired only with the consent of farmers. 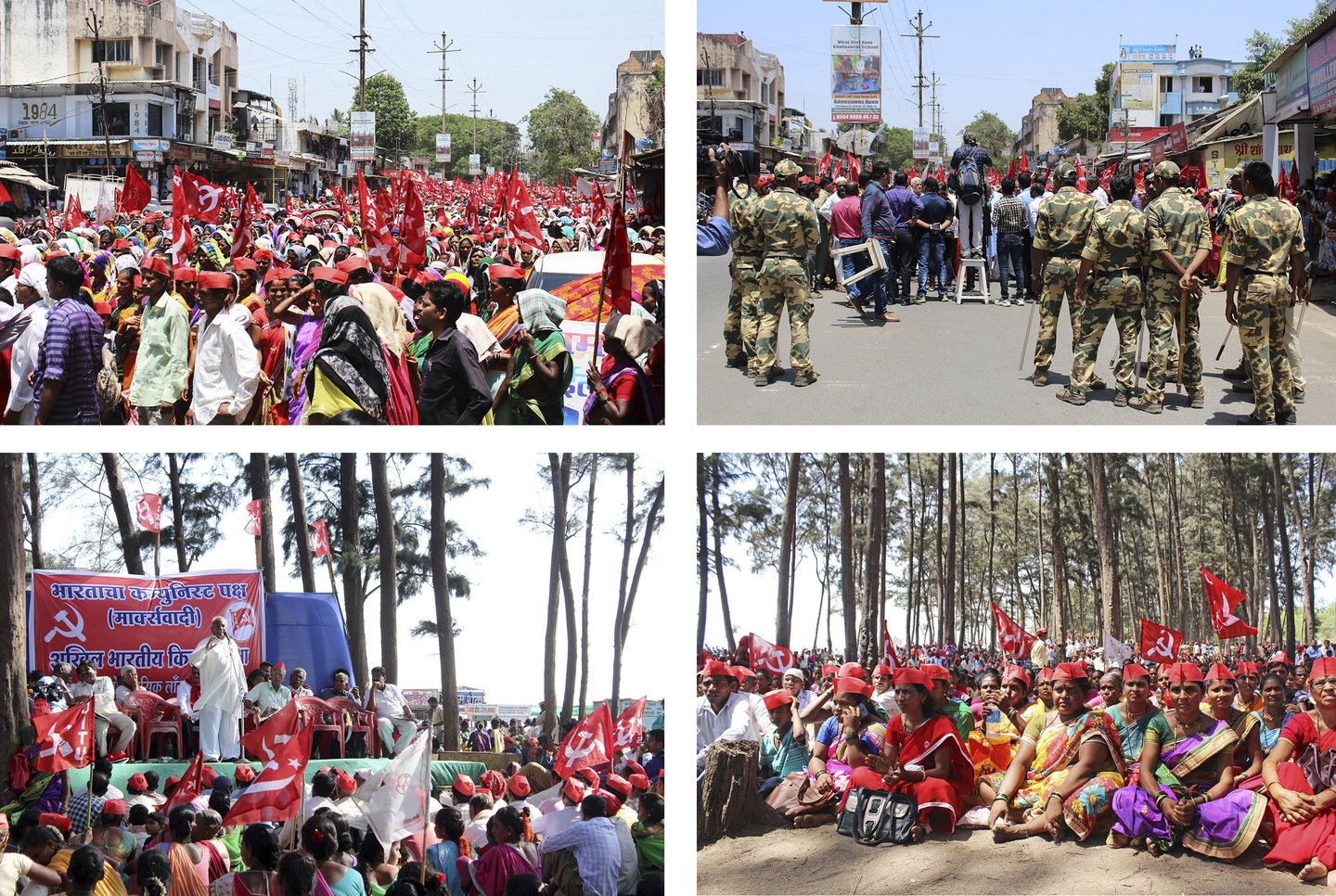 Top: Around 35,000 Adivasis, most of them subsistence farmers, particip ated in a Nirdhaar rally on May 3 in Dahanu town, north of Mumbai city. Bottom: The march ended with a public meeting at Dahanu beach where Kisan Sabha leaders reiterated the farmers' demands

The Nirdhaar rally started from Sagar Naka near Dahanu station and ended at Dahanu beach, around 2.5 kilometres away, where a public meeting was held. Amidst a thicket of saru (casuarina) trees, Kisan Sabha leaders reiterated the major demands that the government was forced to concede to – in writing – when a force of 40,000 farmers marched into the state’s capital in the month of March.

One of the main demands of the Adivasi farmers – in the morchas in March as well as May –  is to be given land titles for the plots they cultivate. Ratna Jeete Lakhan and Bhiva Bindu Jabar, who came to the Dahanu march from the Modgaon-Kasodipada hamlet, around 30 kilometres away, say forest officials often harass them and accuse them of farming illegally on forest plots.

The land in forests tilled by Adivasis is rightfully theirs, says the Scheduled Tribes and Other Traditional Forest Dwellers (Recognition of Forest Rights) Act, 2006 , more commonly known as the Forest Rights Act (FRA). But most Adivasis across the state still do not have any land documents. After the Nashik to Mumbai morcha in March, the Maharashtra government agreed to speed up implementing the FRA, under which Adivasi farmers – both husband and wife – will be awarded a joint title for up to 10 acres of forest land that the family has cultivated since December 2005.

“Forest officials have put compound walls,” Lakhan says. “They cut and take away our crop. They don’t even let us gather wood. They claim that the land is not ours. But we grow paddy, jowar, ragi, chavli , tur, urad … everything.”

'Like children of the forest we cared for the trees in the forest... This is our land. We have cultivated it with all our care. This is unjust. The government has no shame'.

Watch video: Adivasi farmers at the rally in Dahanu talk (and sing) of faulty government policies, and express their demands

He is afraid that their land will be acquired for infrastructure projects, but adds firmly, “We won our land after a long struggle, a lot of which we lost to the dam [the Dhamni dam on the Surya river]. This land is our right. We won’t let them take it. We won’t budge.”

Lakhan is referring to the Warli uprising led by the AIKS from 1945-48.  Spearheaded by the revolutionary and freedom fighter, Godavari Parulekar, the Adivasis of Thane-Palghar had liberated themselves from a system of slavery called vethbegari, which forced them to work for no wages for landlords and money-lenders. They drove away their old landlords and started cultivating their lands. On March 12, the government agreed to vest this land in the names of the tillers. The government has also promised to give cultivators title deeds to temple land – devasthan or inami land – owned by temple trusts but tilled by many Adivasis and some non-Adivasi families.

Farmers like Lakhan are deeply anxious about proposed projects like the Mumbai-Ahmedabad ‘bullet train’. The National High Speed Rail Corporation Limited is acquiring land in Palghar for this project. Of the 508-kilometre proposed route, 155.642 kilometres is in Maharashtra, mostly in the predominantly Adivasi belts of Thane and Palghar districts. 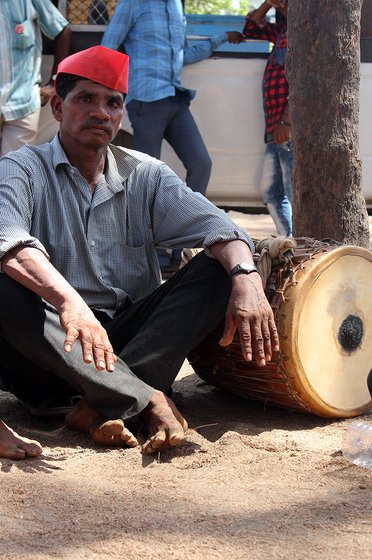 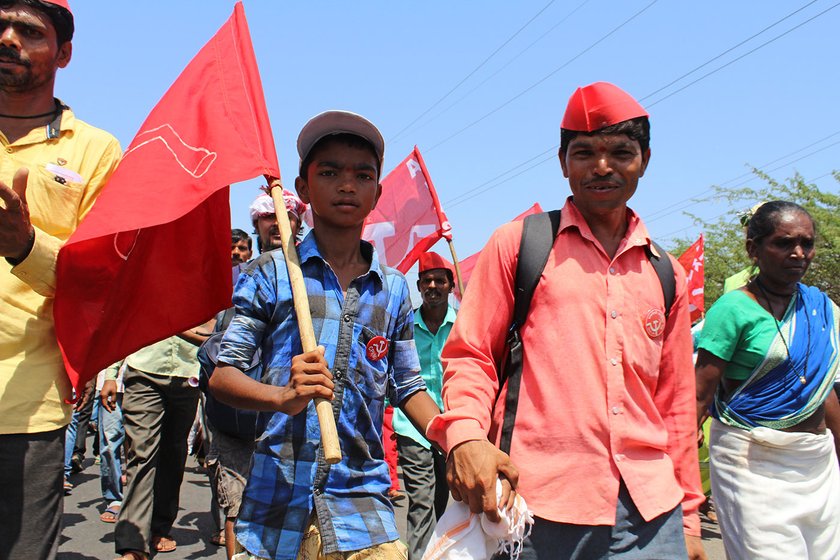 Left: 'This land is our right. We won’t let them take it. We won’t budge', says Ratna Jeete Lakhan of Modgaon-Kasodipada. Right: Sandip Garel from Dhakane village and his young son participated in the rally to protest against the denial of forest rights to Adivasis

Sandip Garel from Dhakane village in Shahapur is at the march with his 12-year-old son, Ankush. He says, “Like children of the forest we cared for the trees in the forest. But if we collect firewood, the forest officials file cases against us. These incidents are on the rise. This is our land. We have cultivated it with all our care. This is unjust. The government has no shame.”

Water for drinking and irrigation has been another central issue of this and previous Kisan Sabha agitations in the districts. Vijaya, who is here with a group of farmers from Borala-Aghai in Shahapur, says, “For our land, we need water and electricity.” Despite the prime minister’s recent claim of 100 per cent electrification of all villages in the country, no electricity has reached her village. A shortage of drinking water is another big problem. Their wells have gone dry. Borala is right next to Tansa lake, one of the seven sources of potable water for the nearby metropolis. “Mumbai gets all the water. We live next to the lake. We get no water,” Vijaya says.

When asked what crops they grow, she laughs, “We don’t have water. What crops can we grow? We don’t even have water to drink.” The farmers who grow paddy, ragi, udad, varai and tur, depend entirely on rainfall. “We go at night to get water from a puddle, deep in the dried well,” Vijaya says. Thane and Palghar districts have some of Maharashtra’s largest reservoirs such as Tansa, Vaitarna, Bhatsa and Surya (Dhamni). Most of this water goes to the Mumbai metropolitan area. 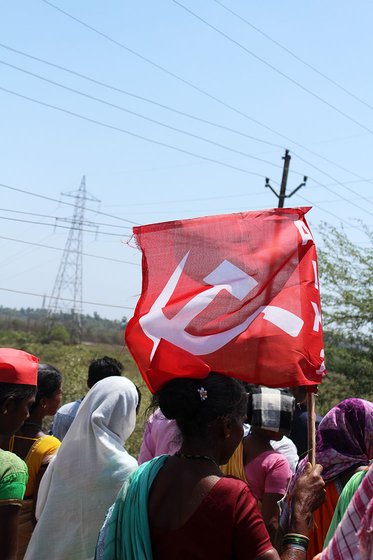 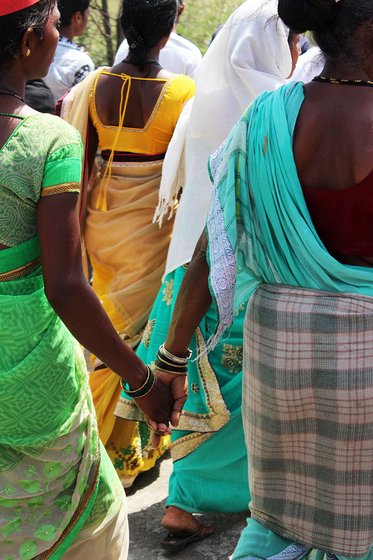 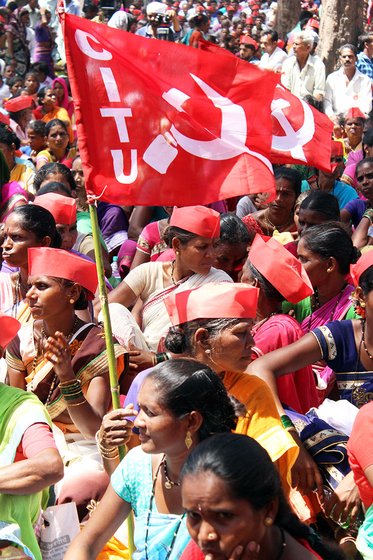 After the Long March, the government agreed to implement irrigation projects within a timeframe, and ensure fair distribution of water without displacing Adivasi villages. The state has agreed to complete the National Water Development Authority’s damming of water of the Nar-Par, Damanganga, Wagh and Pinjal rivers flowing into the Arabian Sea, and diverting it into the Girna-Godavari valley. It  has also promised to use this water for the state. In addition, 31 small irrigation projects will be completed without displacing tribal villages.

The state government agreed to a few other important demands after the Long March, including replacing torn and old ration cards within six months, making rations available at reasonable rates in public distribution system outlets,  and augmenting old age pensions and other pensions. Adam Narasayya Narayan, former CPI (M) member of the legislative assembly from Solapur, reminded the farmers gathered in the public meeting in Dahanu: “As a twice elected ex-MLA, I get a pension of Rs. 60,000. From the chief minister to the government peon everyone gets a pension. Yet the government struggles to give you, the farmers of this country who work all your lives feeding the nation, an adequate pension?”

Most of the Adivasi farmers who marched during the Long March, as well as those who came to Dahanu on May 3, are subsistence farmers. They grow food crops and have little surplus to sell. As Ashok Dhawale said, “It is a great tribute to the Adivasi farmers in the Kisan Long March and also in the Dahanu rally that they raised all these burning issues to express their full solidarity with farmers all over the state and the country.”

The legacy of the Warli uprising is clearly still present among the people at the May 3 morcha . “We won’t give up the land we till,” Vijaya says. “They can do what they want.” But why the red flag? “It’s our flag,” she says. “It stands for our unity and for our struggle.”